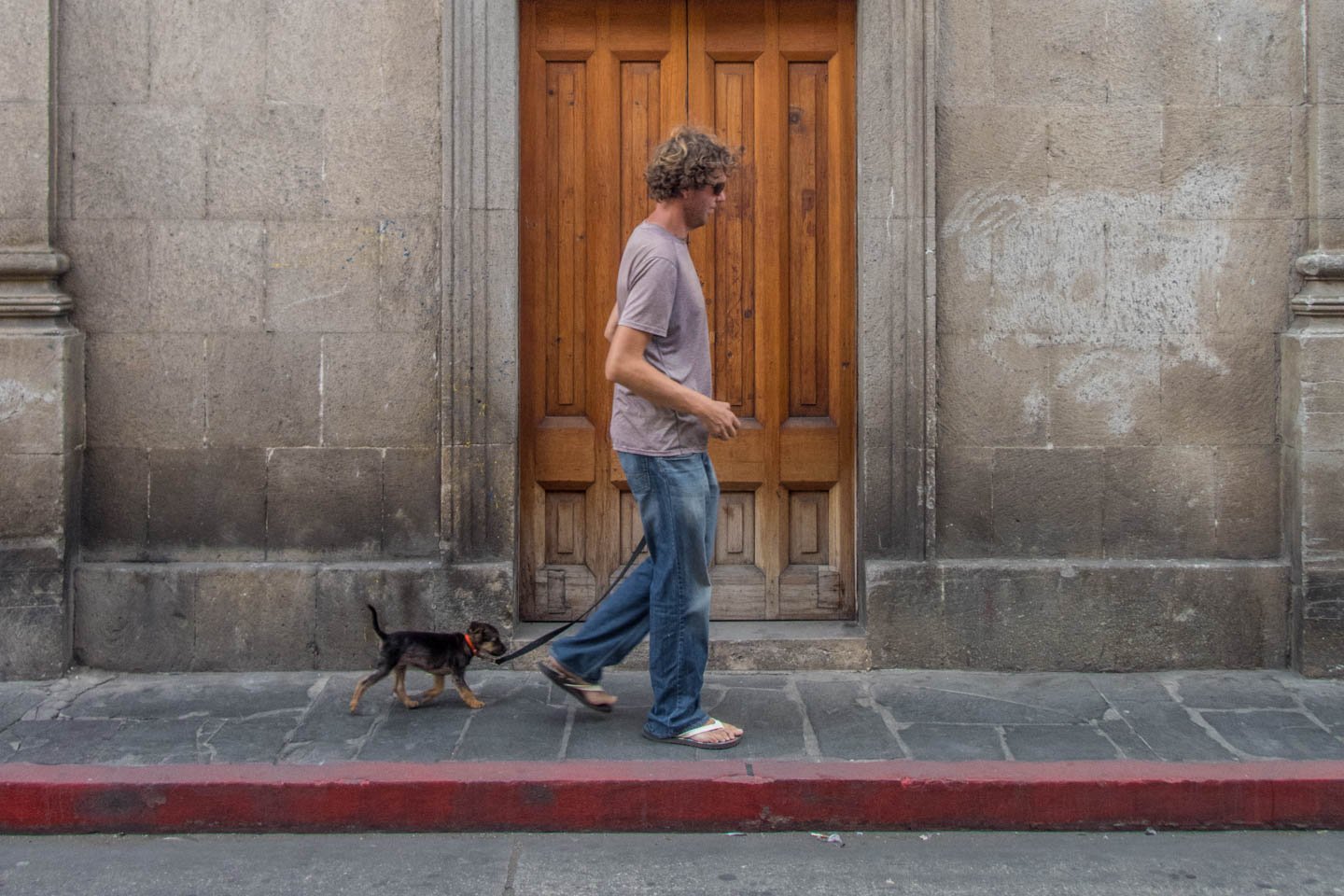 We still had a few more days before we were due back in Antigua, but the weekends crowds had ruined the relaxing atmosphere of the beach side towns. It had only been a few days, but we already craved the cool tranquility of the mountains.

We had heard of a relaxing set of hot pools, Fuentes Georginas, near Xela (Quetzaltenango) a city we had wanted to explore, so we made our way there instead.

The cool mountain air was not met with a lot of enthusiasm by our new four-legged companion.

By the time we arrived at Fuentes Georginas as the crowds were leaving.

The guard on the gate informed us that the pools were being drained and cleaned overnight, so there would be no water in the main pools until morning. 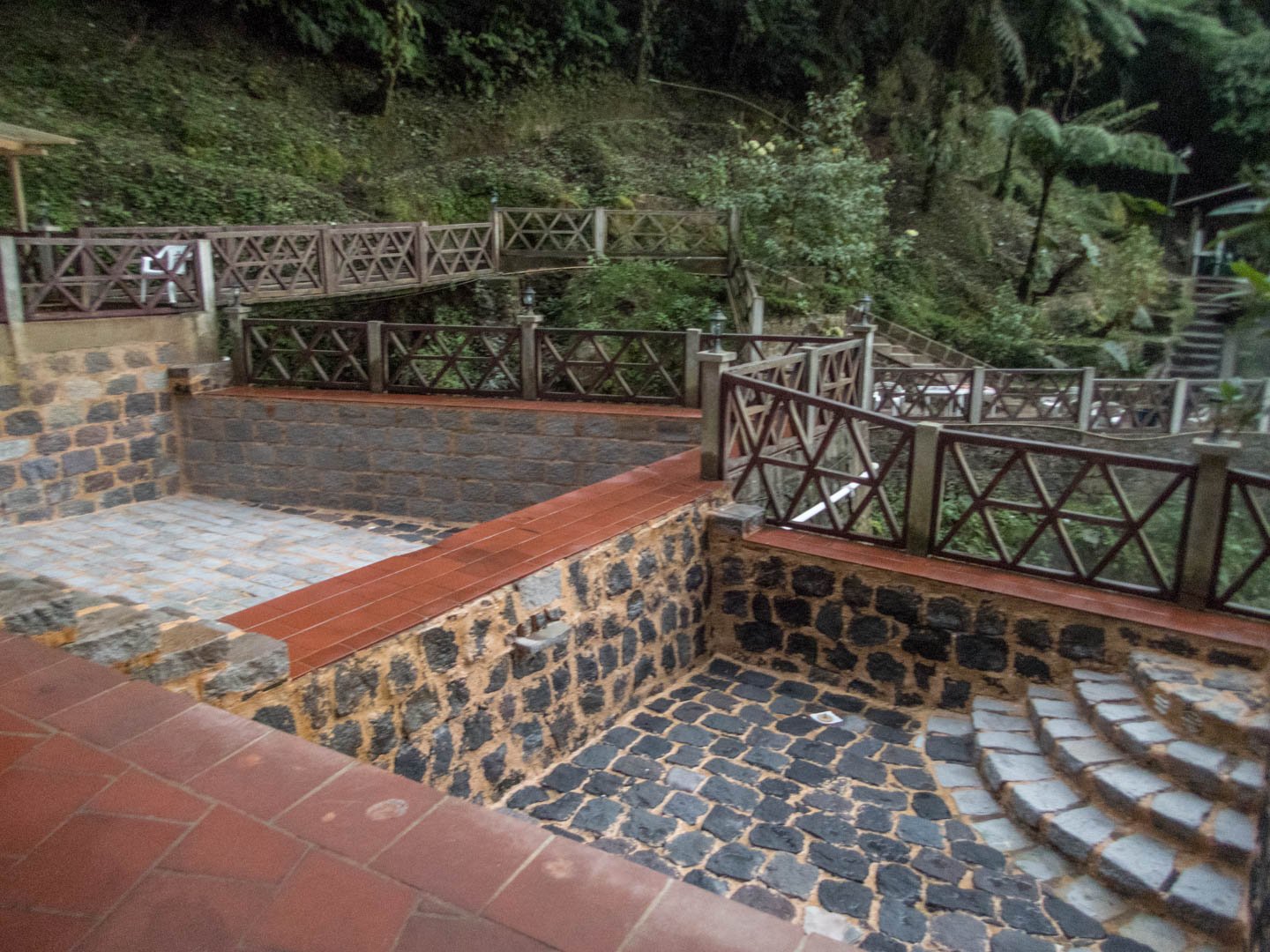 The good news? Tomorrow the pools would be filling with fresh, clear, thermal spring water. Straight from the mountain source.

Even better, we were allowed to camp in the car park where there was one natural pool that was not being drained, so an evening dip in a hot pool was not out of the question.

The thermal pools are located in the mountains just out of Zunil. At an altitude of over 2,000m. That makes for some pretty cold night time temperatures. So warm water was exactly what was needed.

Both at night and in the morning we had the facilities mostly to ourselves. In the morning, we soaked in the main pool and watched as the level slowly rose around us, the steaming hot water was gently trickling down a sheer rock face, straight from the heart of the mountain.

We would have relaxed longer, but our new four-legged companion only wanted to wait around in a bundle of warm clothes snoozing for so long. 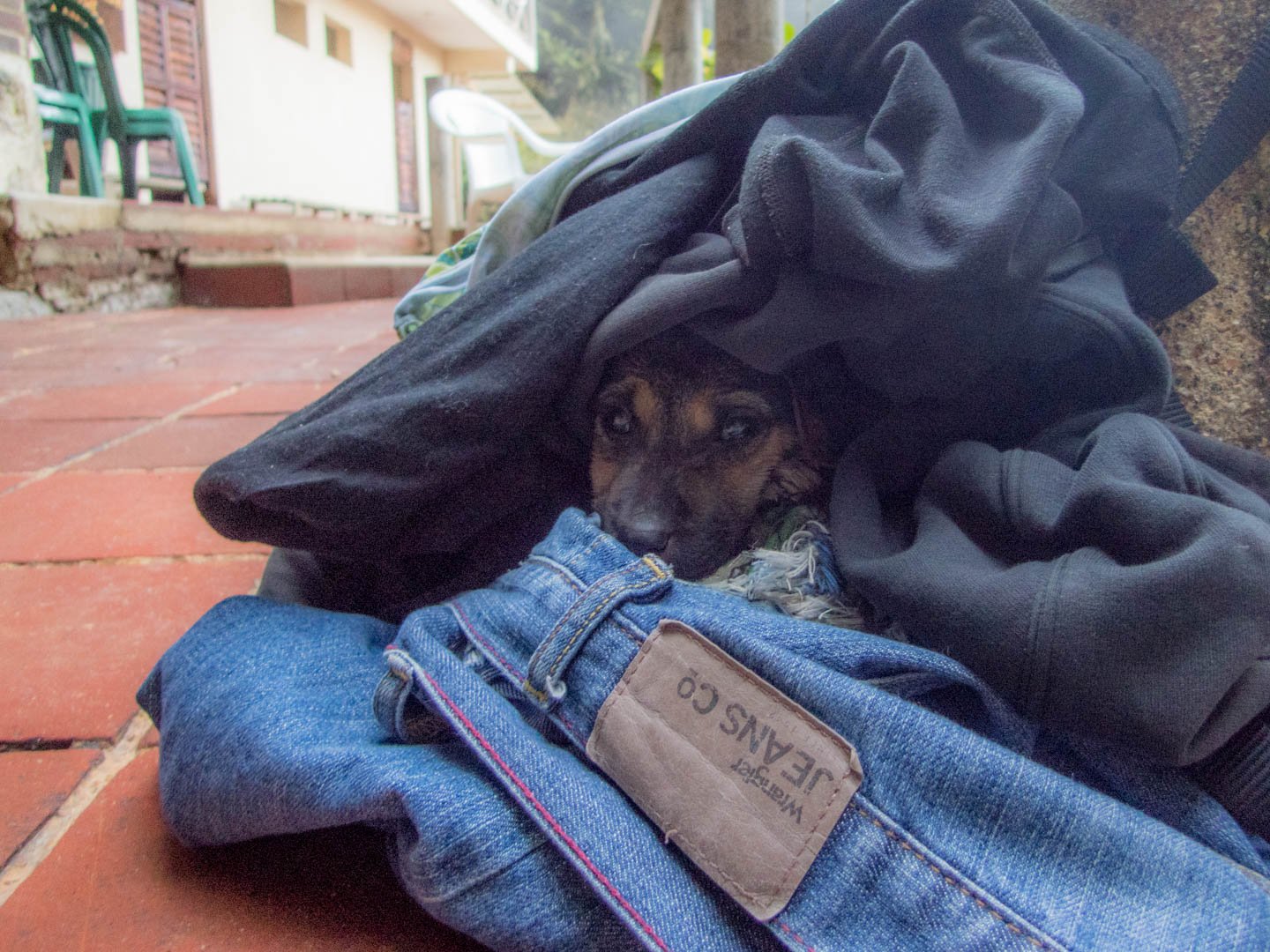 She was ready for more adventure.

The sun was shining when we arrived in Xela. So we took our little pup out on an adventure in the big city.

Xela was a city where could have spent a lot more time exploring. Interesting buildings, layers of history, with a friendly and welcoming vibe. We were a bit disappointed we hadn’t spent time here during our earlier travels. Instead, we made the most of our short time in the city.

We went in to one textile collective, the lady who was running the stall cooed and clucked over the little pup. But she was very disappointed when we said she had no name. That’s bad luck you know. You should give her a name. You could try Mono (Spanish for monkey) because she looks like a little bald monkey.

Honestly, we thought she looked a bit more like a piglet. 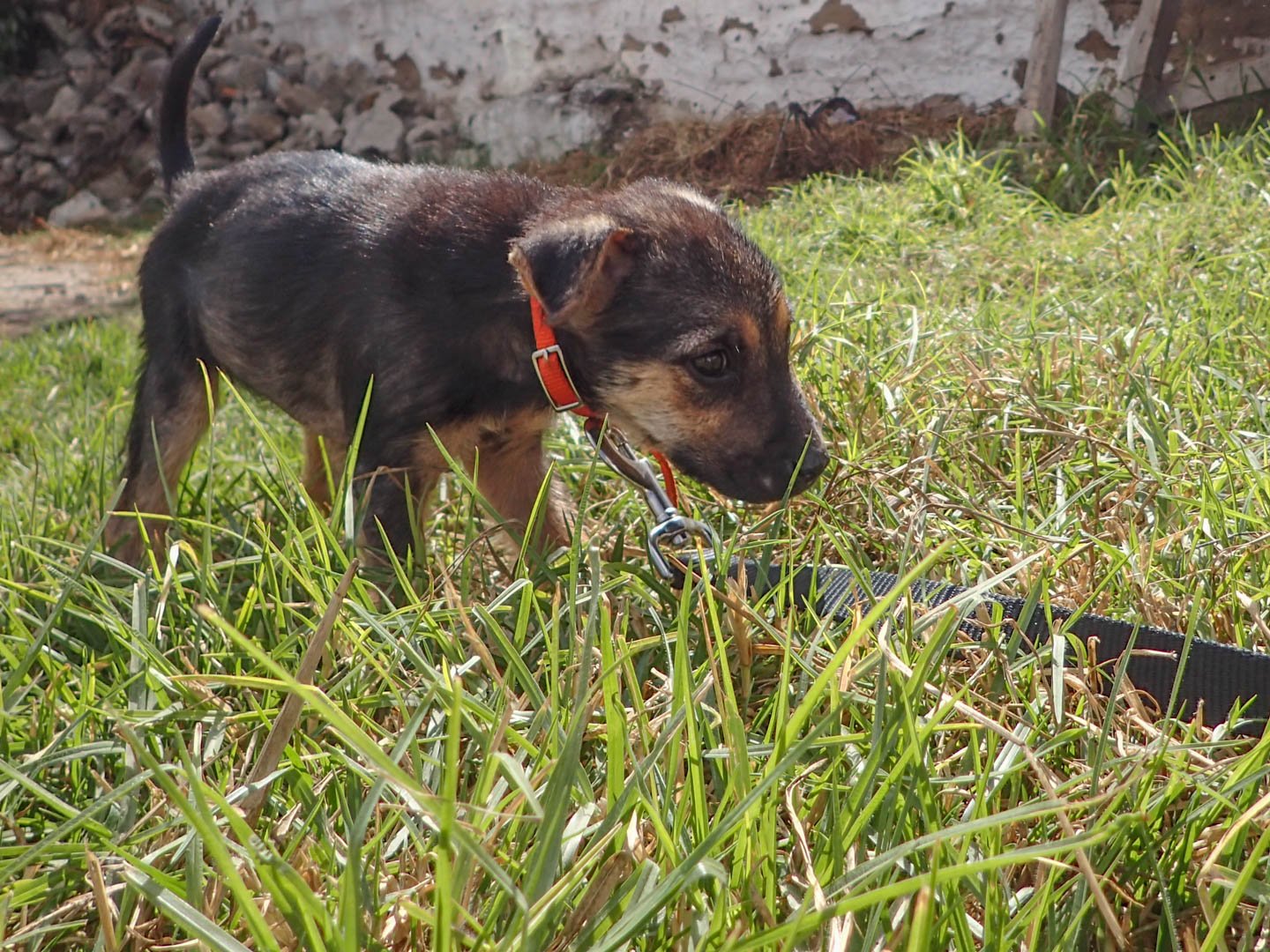 But the textile vendor was right about one thing.

This little pup needed a name.

We pondered what we’d call her apart from “little pup” as we wandered around the scenic city of Xela. 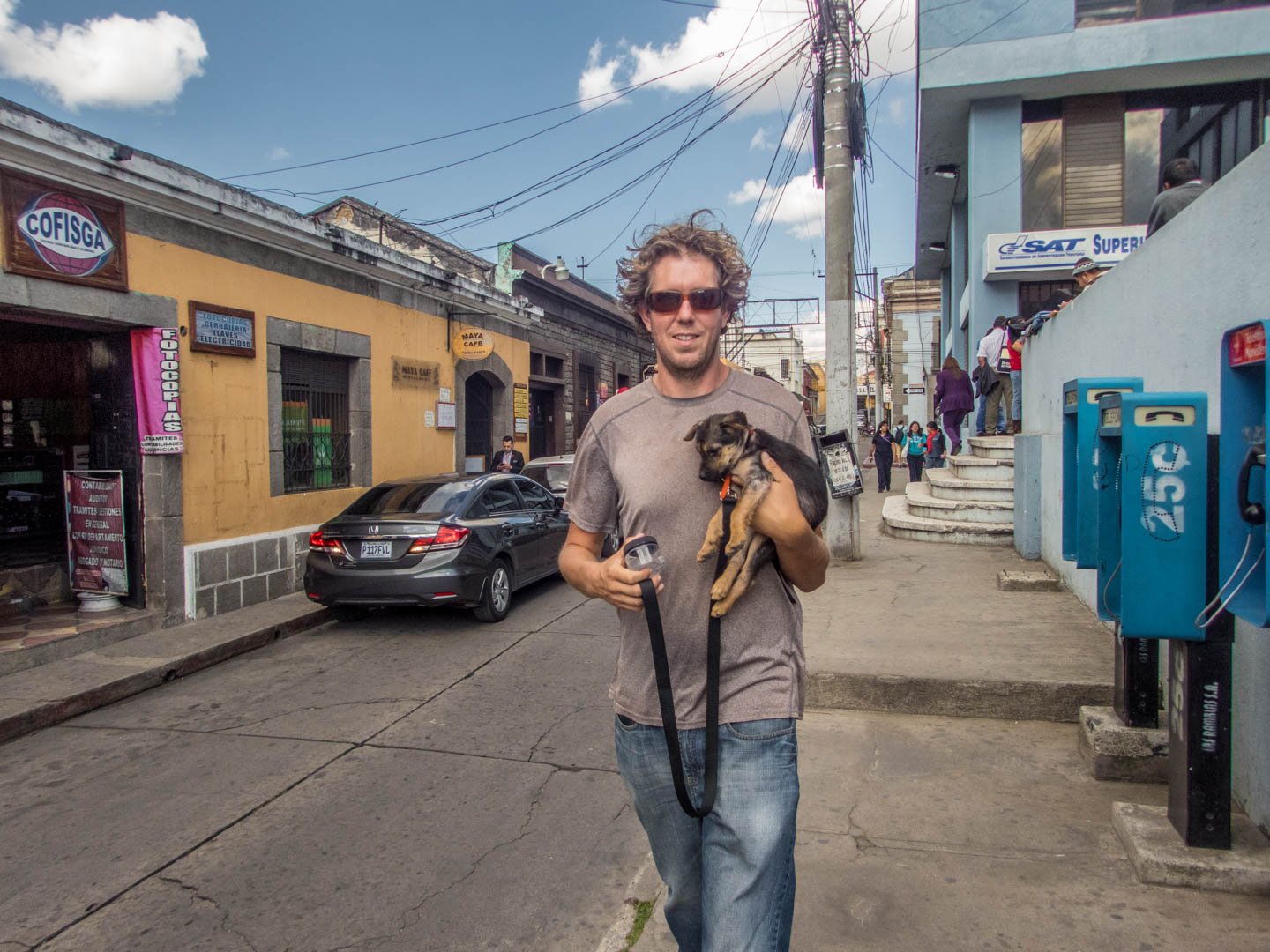 When you are a tiny puppy with short legs walking around all afternoon can get to be a little much.

It was becoming clear that this little critter was pretty happy hanging out with us. 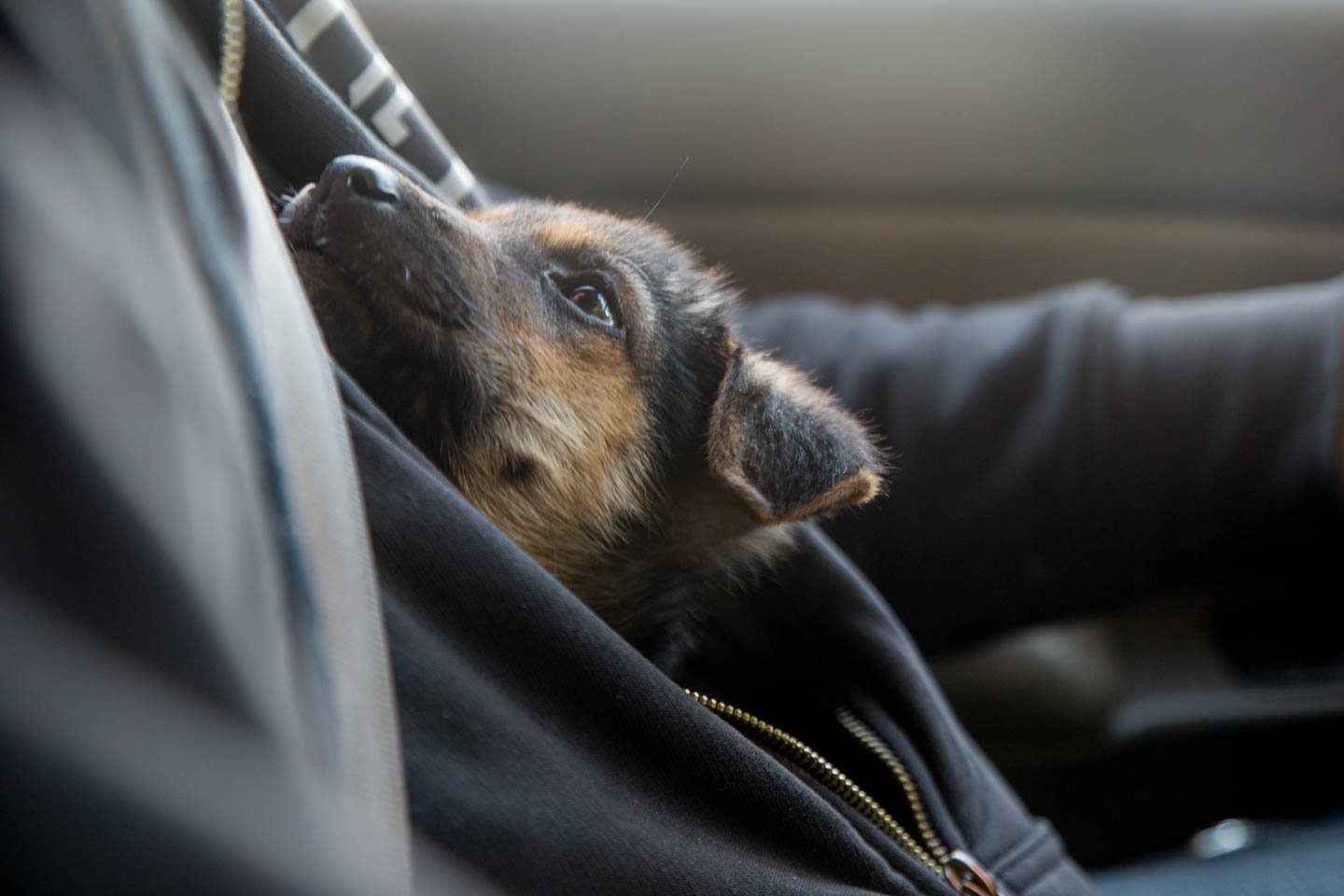 But it was getting all to close to the time to make a decision.

Were we going to drop her off with an animal rescue that the vet in Antigua had recommended?

He had said they cared for their animals well. She would likely find a happy home in the United States and be well fed, cared for and happy for the rest of her life.

On the other hand. It would be difficult travelling with a dog. As well as expensive to ultimately fly back to New Zealand with one. We could just continue to help out dogs in need as we travelled. We would make sure this one was sent to an animal rescue with a big donation to cover her expenses.

The decision was clear.

Some tears were shed. We prepared to say goodbye.

Who am I kidding. Well, Emma really did shed a few tears at the thought of leaving her—But saying goodbye to this little pup was never going to happen.

We had a new travel companion. She wasn’t going anywhere. Well. Except south. But she was going there with us. 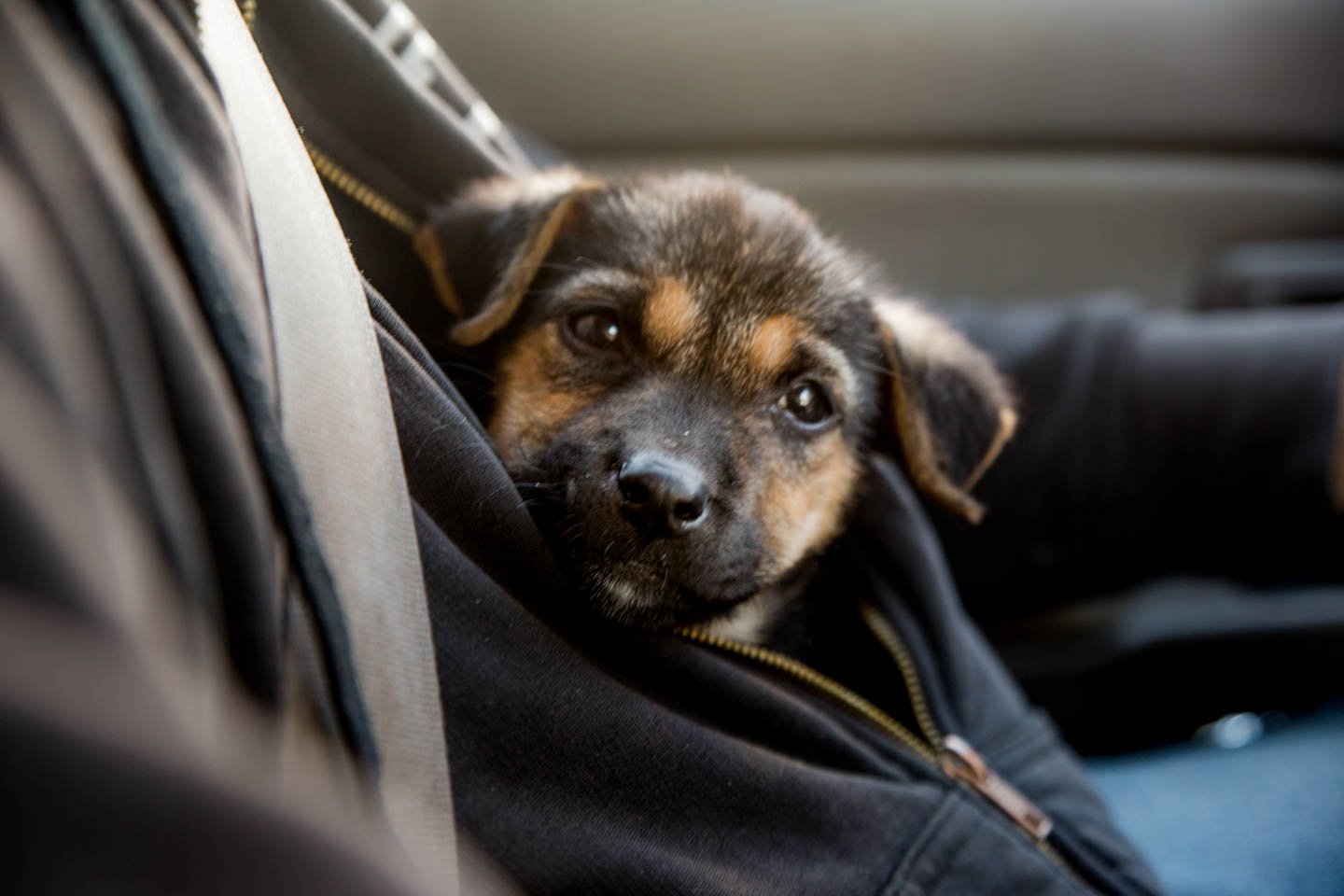 You didn’t think we’d really leave her, did you?

So, just like that we found ourselves up one dog. Freshly vaccinated and provided with a health certificate she would be allowed to cross the border with us. It was almost time to leave.

We were back at the same place we had been headed when we found her. A comfy bed and breakfast with a spectacular view of Acatenango and Fuego volcanoes. 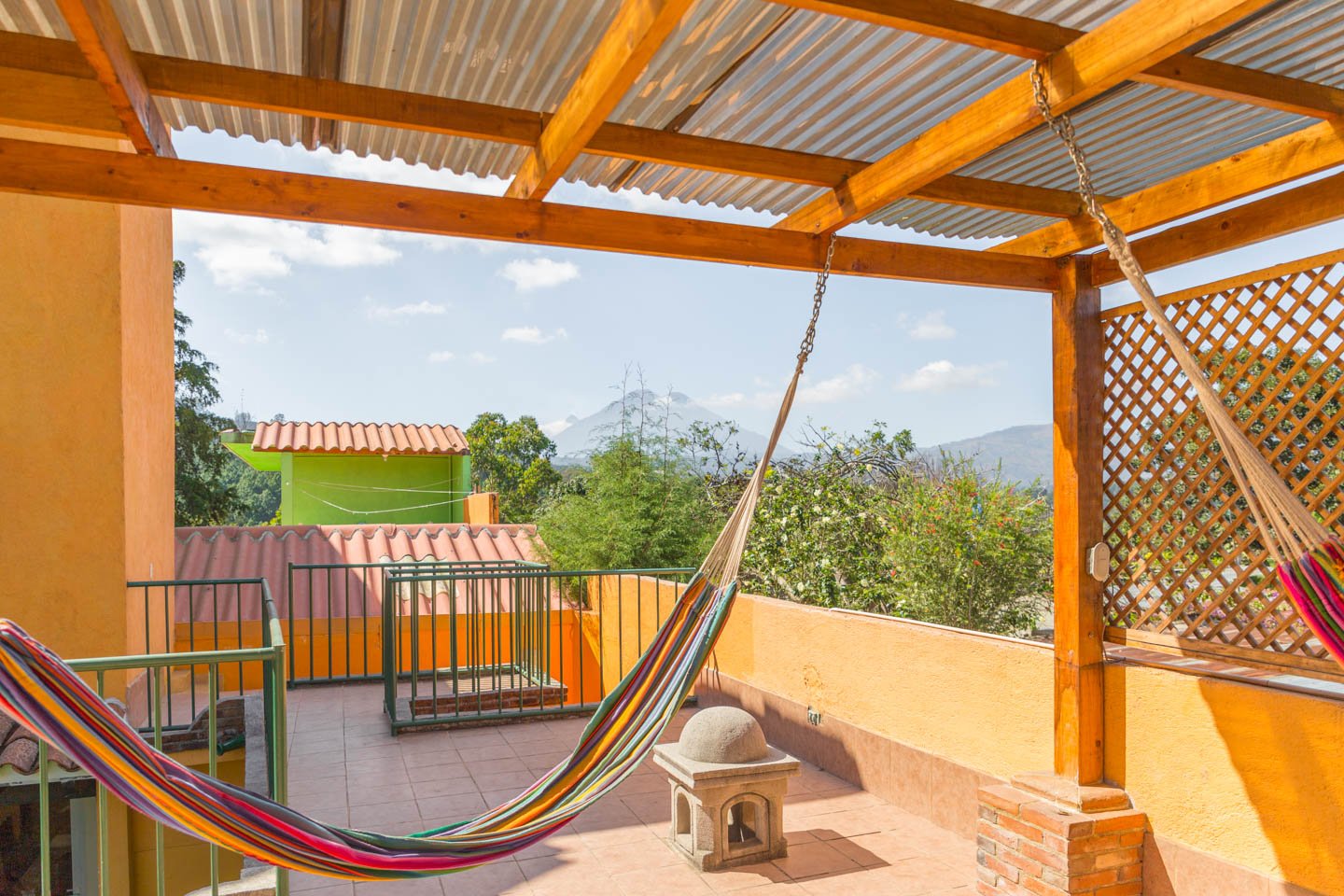 The owners of this bed and breakfast. even had some dogs of their own.

Little Sparky, the same age as our wee puppy, but with a bit more fur.

And patient Galia and older dog who kept both young puppies in line when they started acting up.

On this second visit our shy little pup really started to come to life.

On the previous visit, our little pup had been far too timid to even say hello to either of these dogs.

This time it was a different story.

When she wasn’t bothering Galia, or running around with Sparky, she was stealing his food. 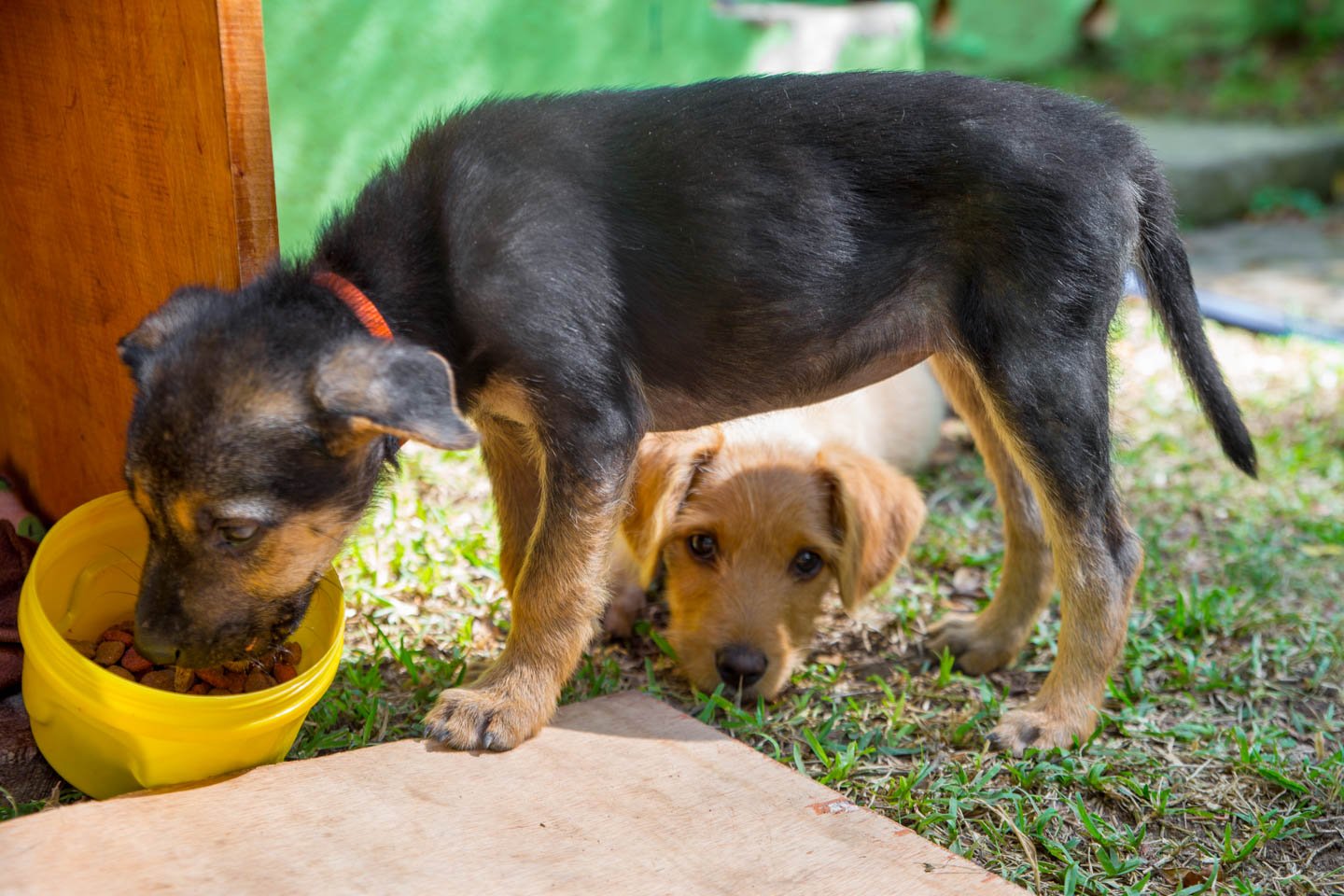 Or simply playing with her new toys and exploring.

Nope. She hasn’t suddenly grown, this is one of those miniature tennis balls for cats…

So this is my toy?

Is this my toy?

Not my toy then?

And we finally had a name for her. 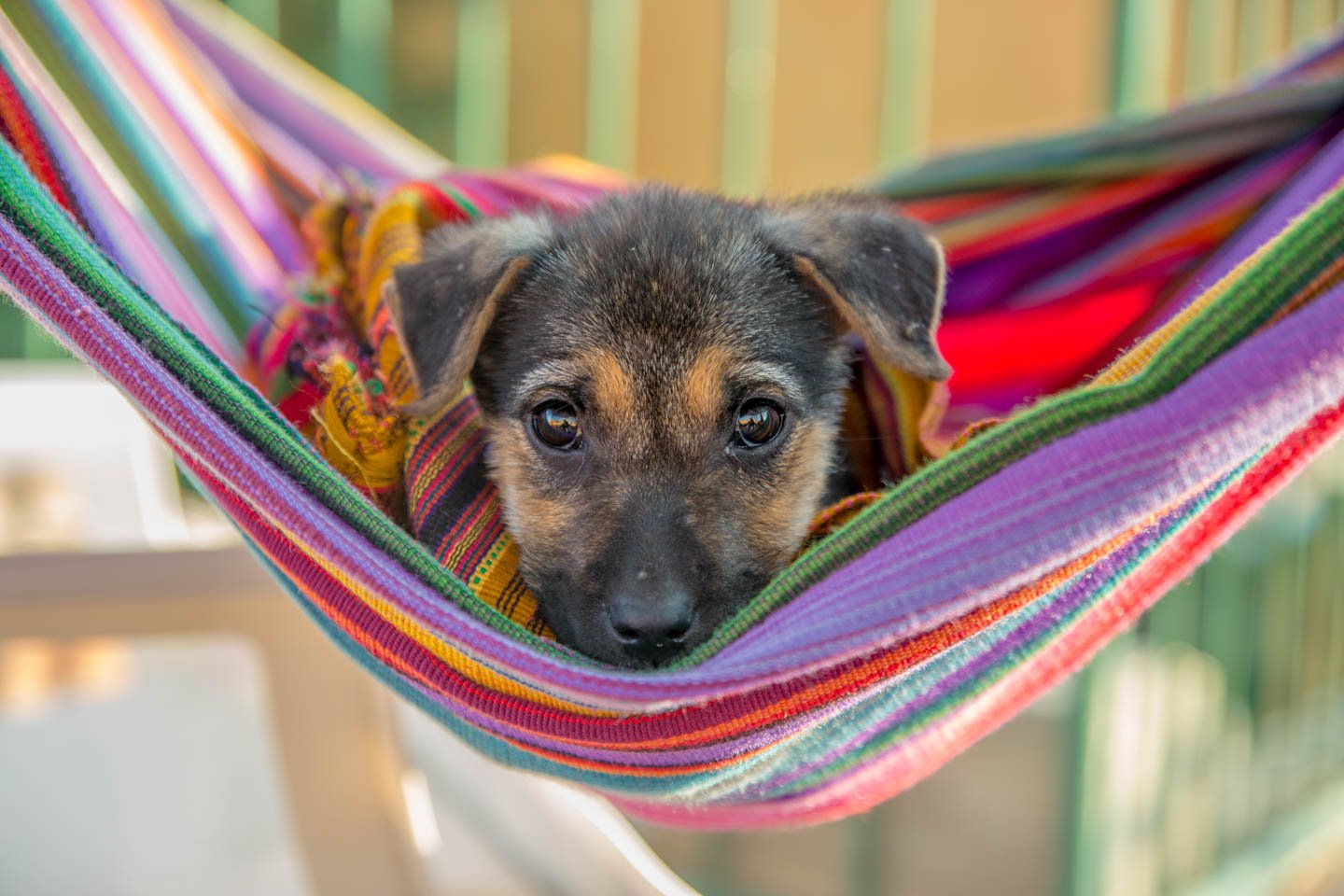 Quite a bit later than we first intended, we finally packed up the 4Runner and left Antigua, one dog richer.

It was finally time to cross the border to El Salvador. 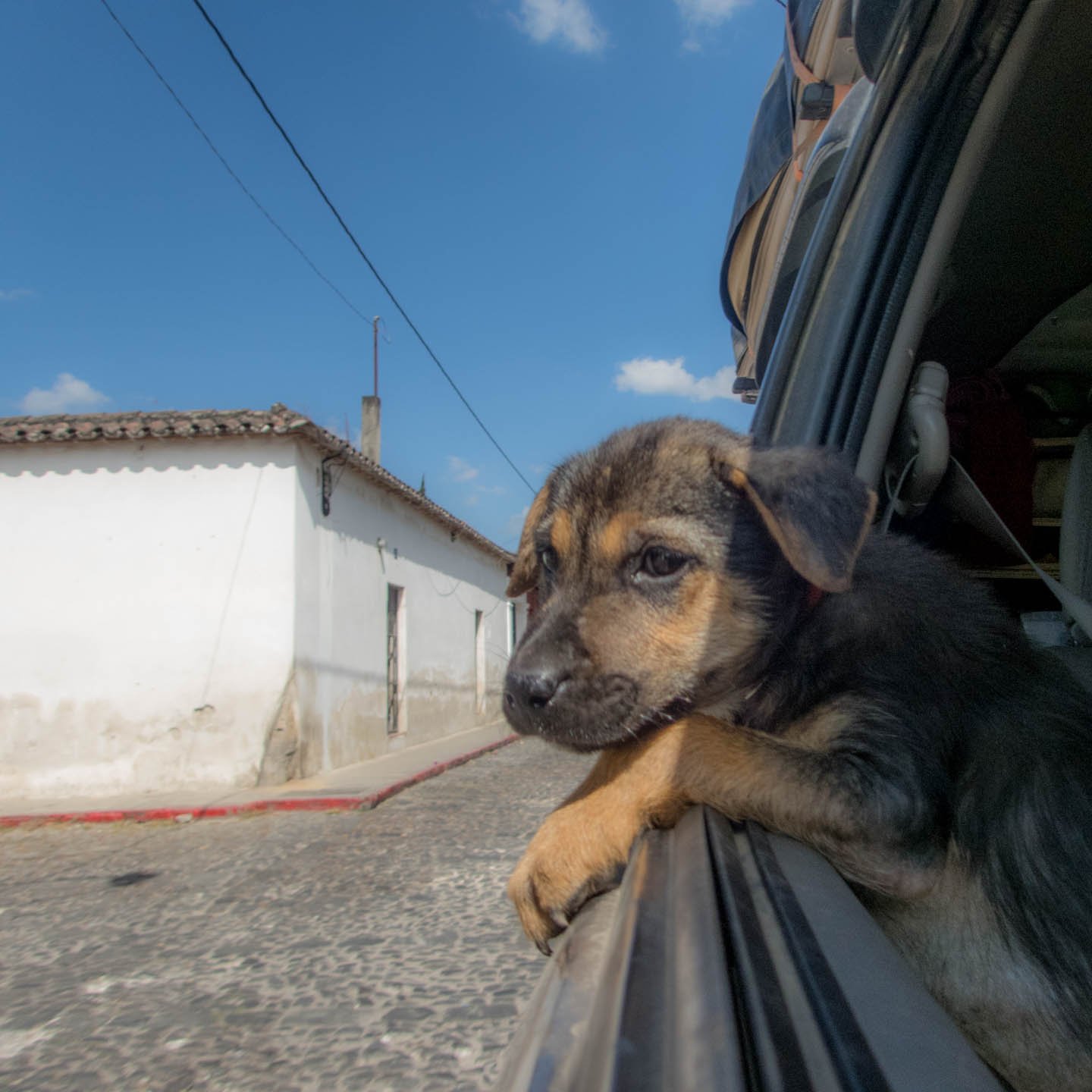 Central AmericacitydogdogsGuatemalaKayleeXela
« Can we keep her?