Back to the underworld 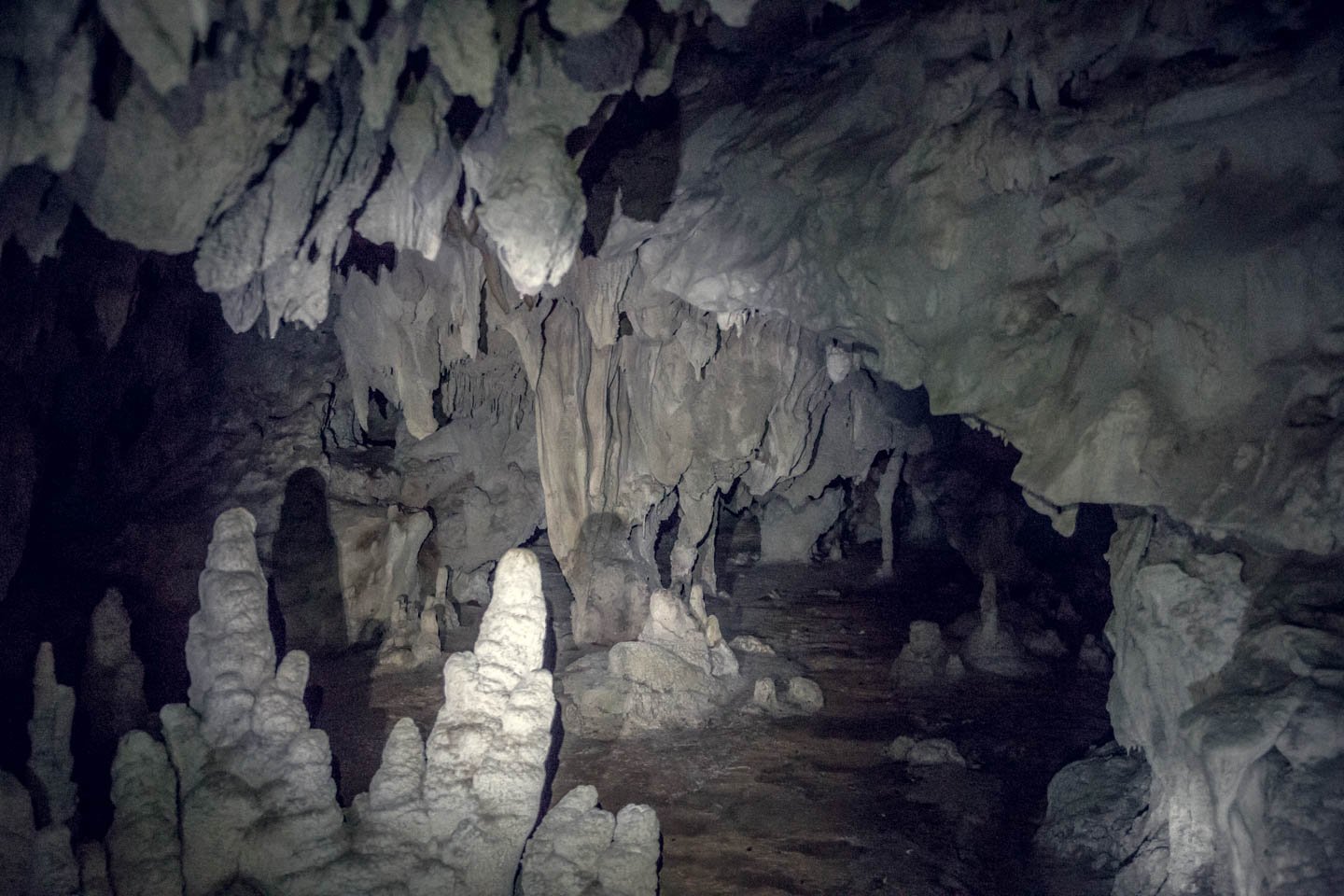 Laziness had prevented us exploring the flooded, bat poo encrusted Grutas de Lanquín. Yet, the sheer number of Guatemala’s limestone caves made it difficult to leave without exploring at least one cave.

Also, we still had some unfinished business with cave tubing. 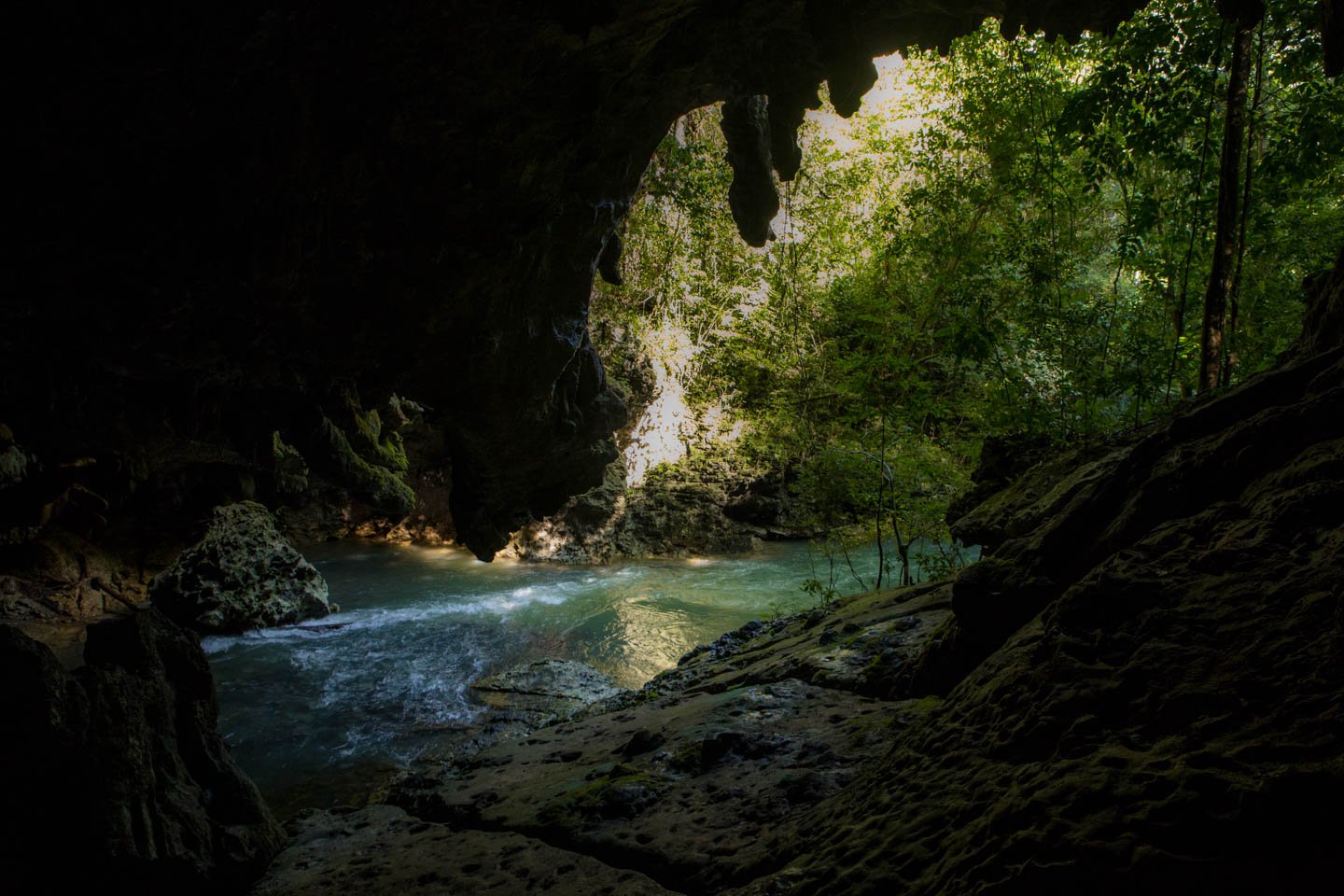 We arrived at the deserted visitor centre at one entrance to the Candelaria caves. It sounded like a party was getting underway in the nearby village. We thought the centre might be closed for the festivities. After quite some time, a little old man shuffled into to view from the trail behind the centre.

He was a flimsy wisp of a man, the kind of person that could be knocked over by sudden blast from an air conditioning unit. But he also had that wiry toughness of someone who has spent a lifetime exploring the great outdoors. The kind of person who could get lost in the woods and return to civilization 8 years later no worse for wear.

He offered to take us on a tour of the nearby caves as well as on an exciting cave tubing adventure. He warned us that the river was a little high. Some sections of the of river wouldn’t be accessible… and the roof may be a little close to our heads.

He handed out dim torches that seemed to only have two settings—’off’ and ‘pretty much off’. They would also switch between these settings at random. We hoped the inner tubes would be a little more reliable.

We didn’t need to worry about getting our feet wet right away, the first stop was the nearby dry caves.

We grabbed our own headlamps to replace the supplied torches. They remained in the ‘on’ position more consistently. However, the dim glow they were emitting didn’t bode well. Should have replaced the batteries.

Our guide informed us that the increasingly raucous celebration was a quinceañera. A Quinceañera is pretty much ‘sweet 15′ party. Latin America does sweet 16 a year early, not to mention on a pretty dramatic scale. This was the party of a relative of tenuous association with our guide. A niece’s daughters’ nephew’s cousin’s uncle’s twice removed granddaughter or something?

As we walked the short and scenic nature trail to the cave entrance the sounds of the party faded. Our guide enthusiastically outlined the history of the area, the various plants and the layout of the caves. Despite our Spanish classes we were struggling to keep up with everything. 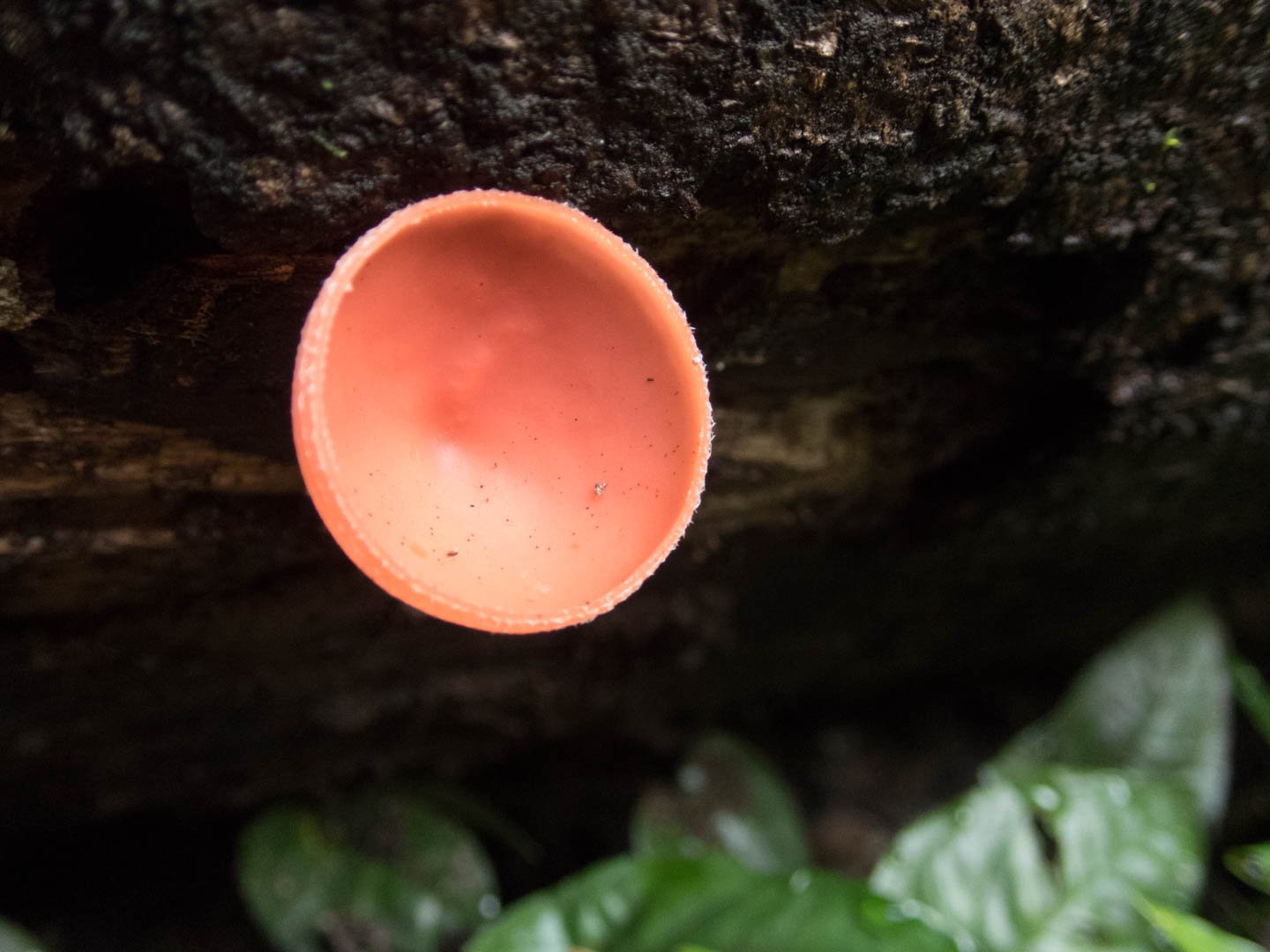 A strange little fluorescent orange fungus clings to a log in the jungle. We knew the Spanish for ‘mushroom’ but that was about as far as we got asking about this little guy.

But we did learn that the caves had been an important site for the local Mayan population for a very long time.

Our guide spoke about how he had grown up in the area. He had spent much of his life exploring and guiding in the local cave systems. Childhood tales of finding ancient Mayan artefacts. That sort of thing.

Like the Actun Tunichil Muknal (ATM) cave in Belize, the Candelaria cave system was believed to be an entrance to Xibalba, (the Mayan underworld). Throughout the caves history it has been an important ceremonial site. The location of archaeological finds and mystic rituals. There was nothing there to see now, of course. Well, you know, nothing except for a pretty amazing cave.

We entered the darkness of the cave. Our fading headlamps cut through the gloom to highlight some spectacular cave formations.

The limestone formations of the caves appeared to have been flash frozen from a liquid state. The rock walls now preserving a former state of motion. Over millennia the slow-building layers had formed twisting, folding, complex formations. A natural process which had created forms that would make any artist proud. 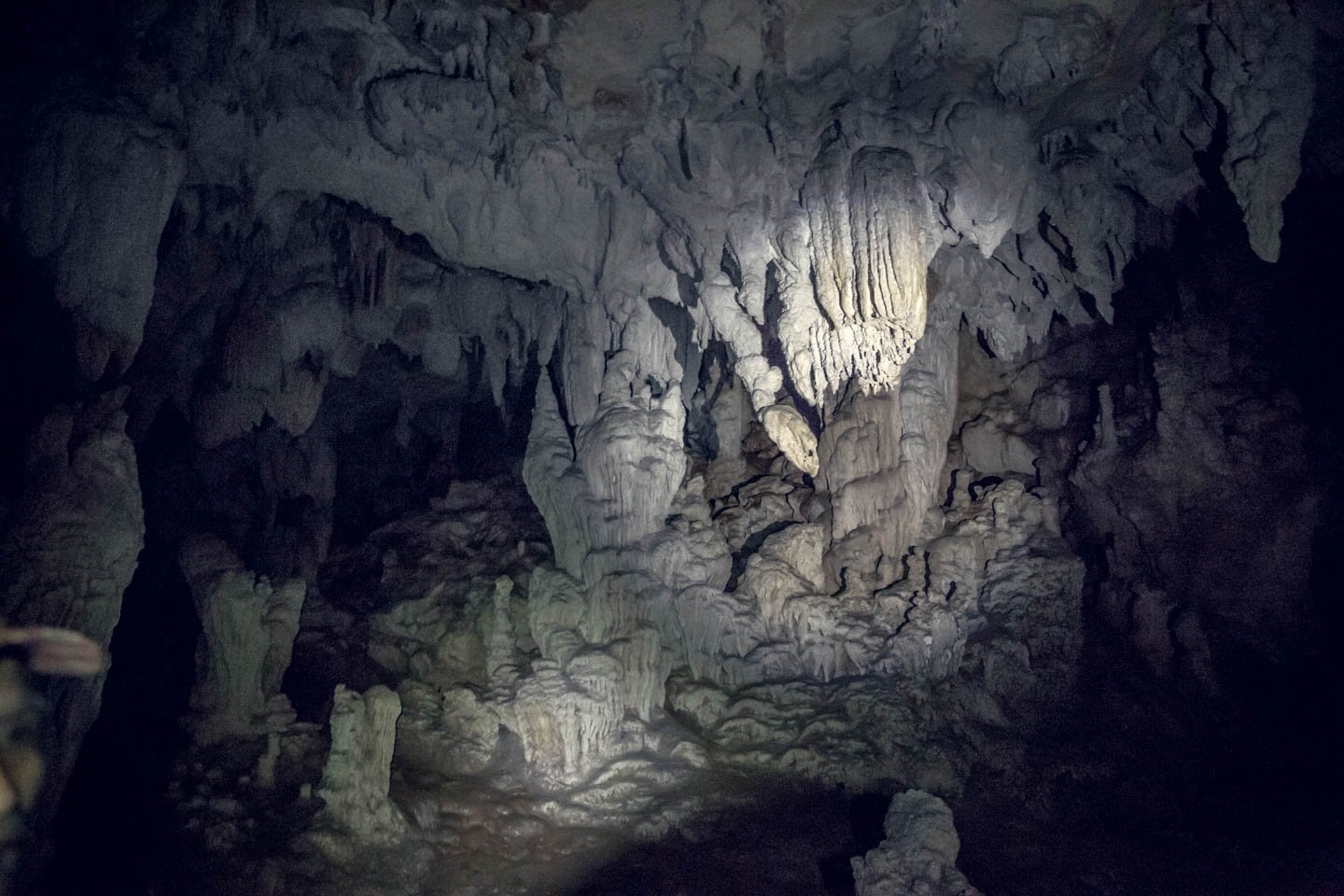 This underground sculpture garden had taken thousands of years to perfect. It was now revealing its form, little by little, at each sweep of our dim headlamps.

And gigantic terrifying arachnids of doom. 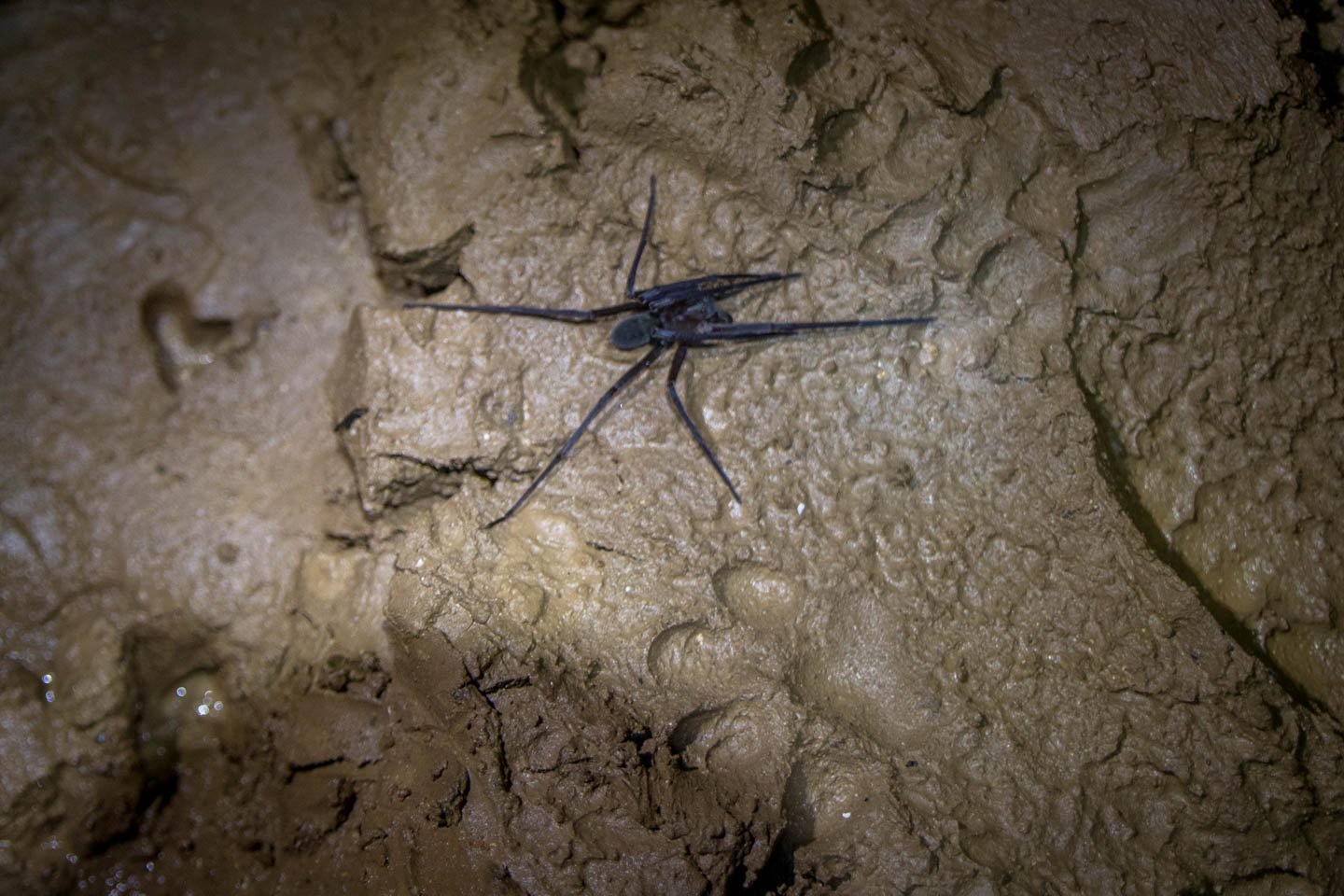 The paw print near the bottom of that image was huge. You know, the size of a wolf, or a puma.

That is not a small spider.

Although our guide begged to differ. He described it as an arañita. (Arañita loosly translates as: ‘Little teeny-tiny adorable fluff spider’). He casually mentioned that he had seen much bigger leggy, leggy death beasts. He vaguely waved his hands to gesture a size akin to a dinner plate.

We weren’t sure if he was kidding.

There was a nearby colony of adorable bats to take our mind of the arachnid terror lurking in the shadows. 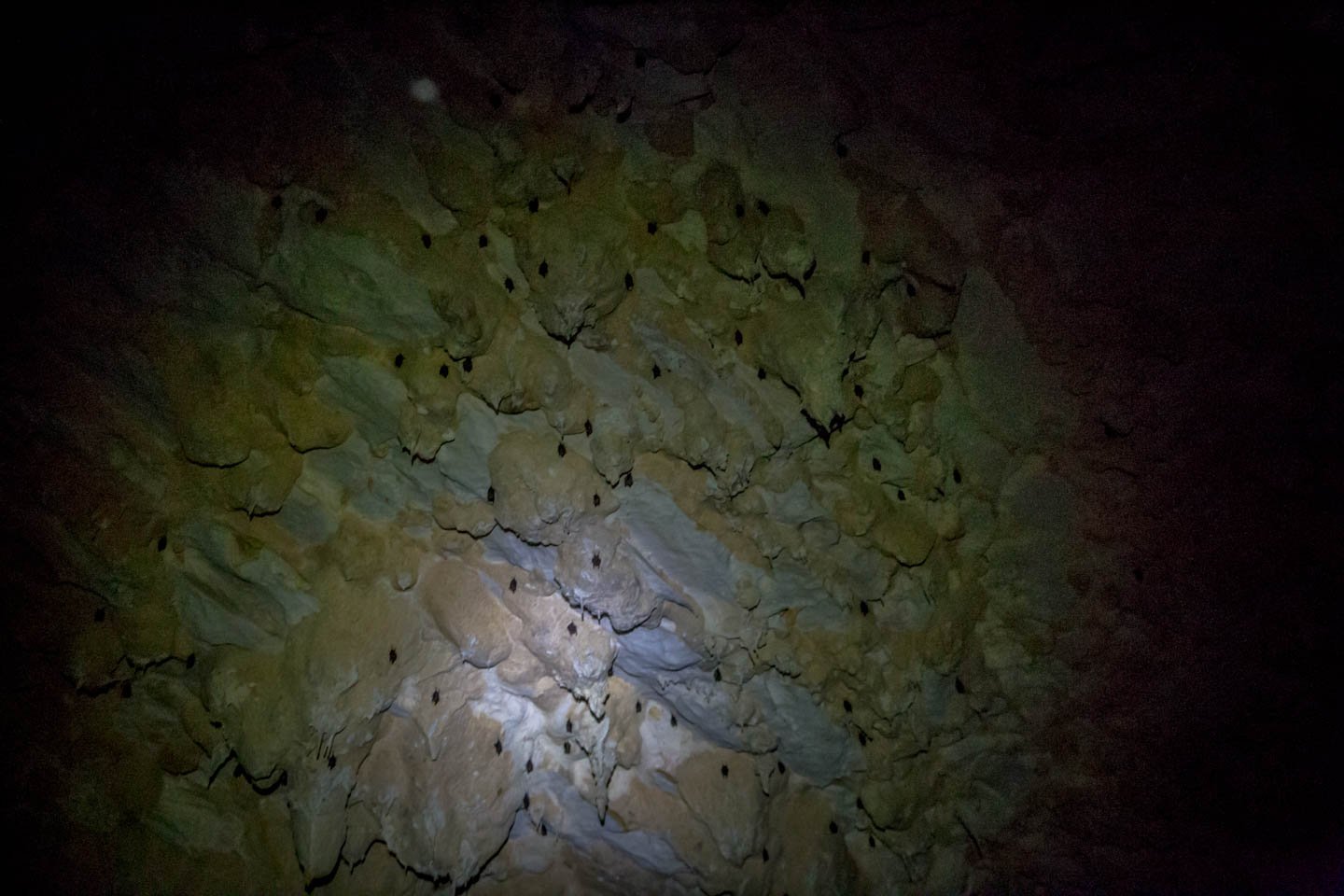 There were plenty more stunning cave formations. Some of these would have raised copyright issues for Salvador Dalí—if Mother Nature hadn’t released her works into the Public Domain. (No attribution required). 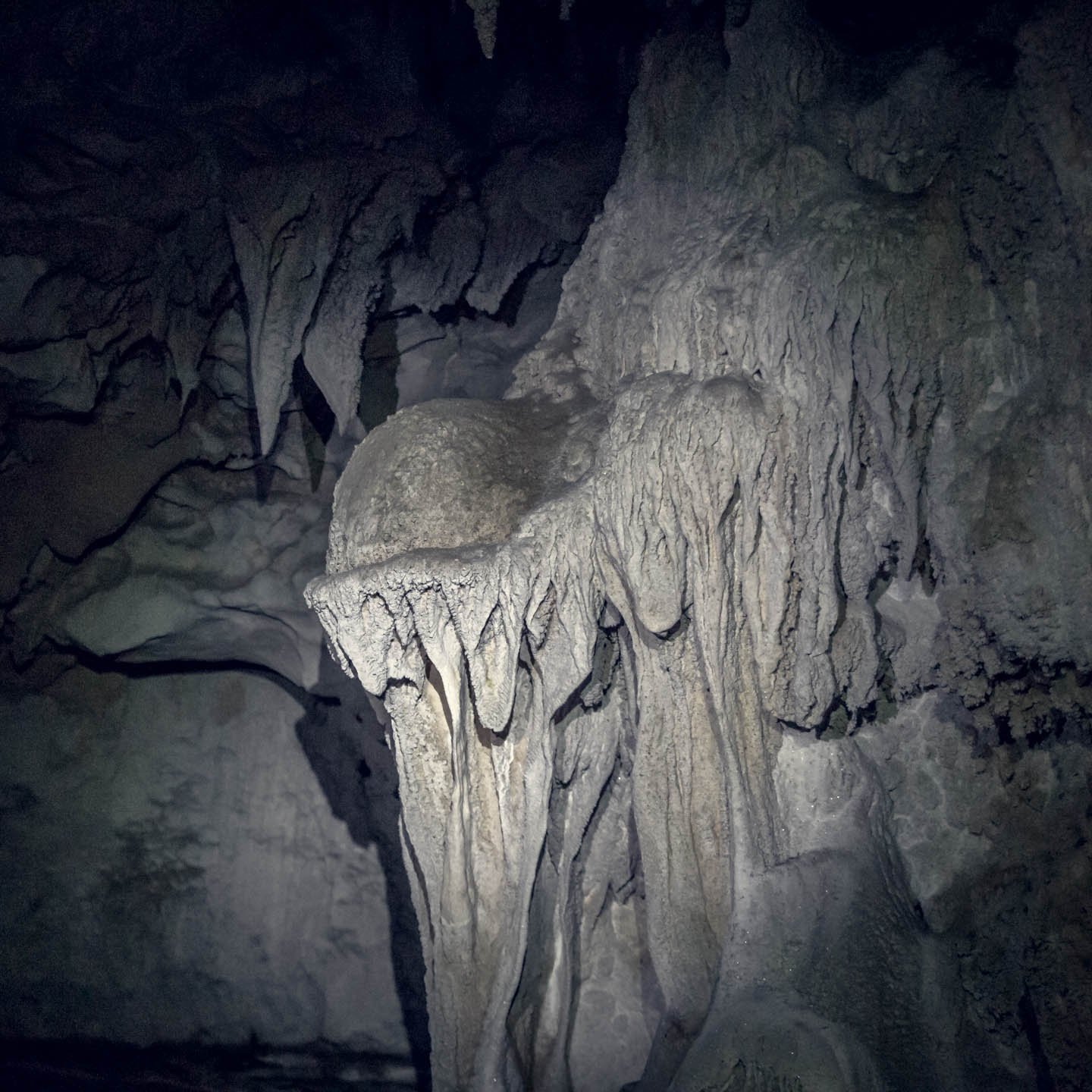 As our tour continued we were, of course, aware of the eight legged nightmare cave-beasts. Always lurking just out of the reach of our feeble torches. But for now, our focus was on the magic of this underground wonderland. 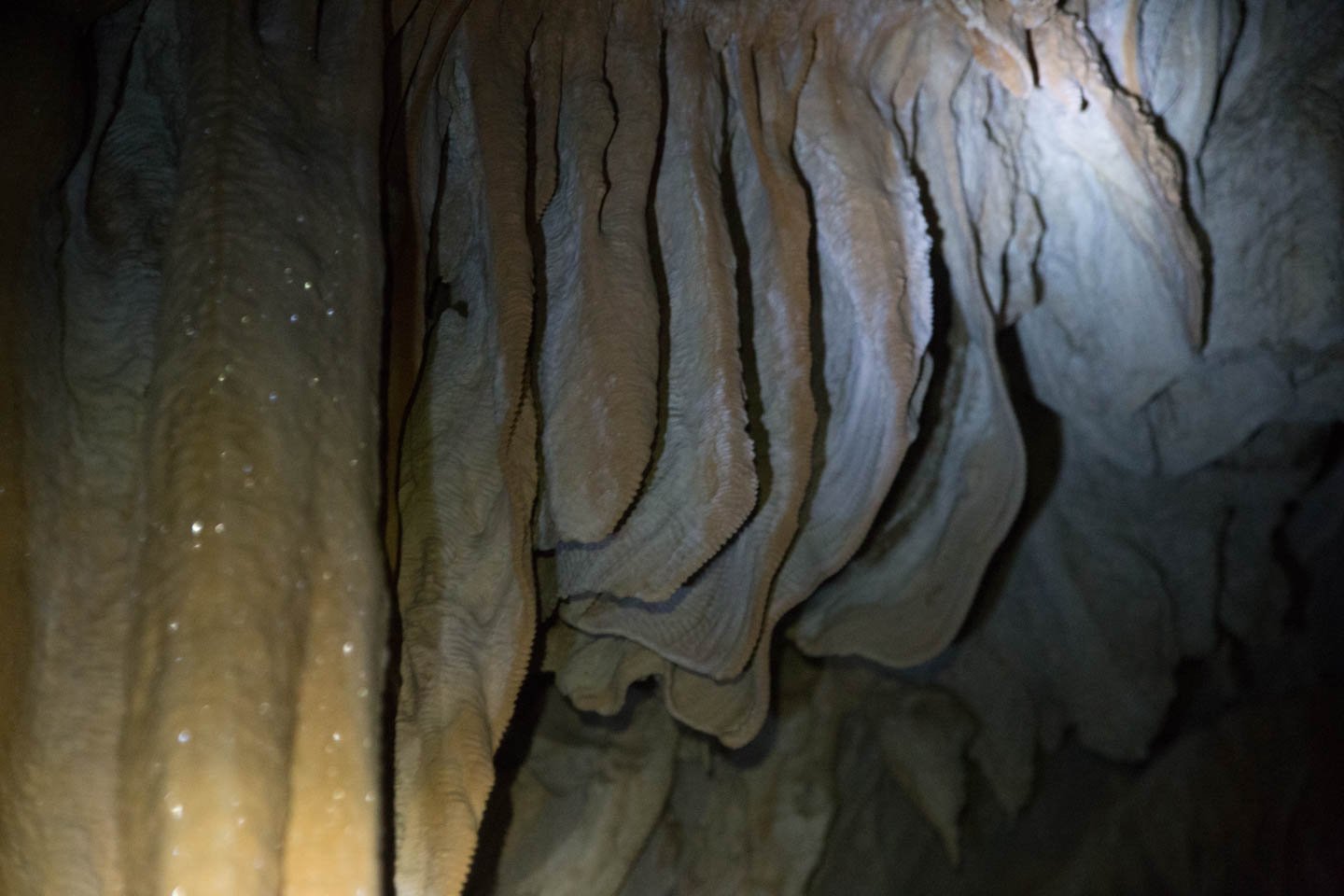 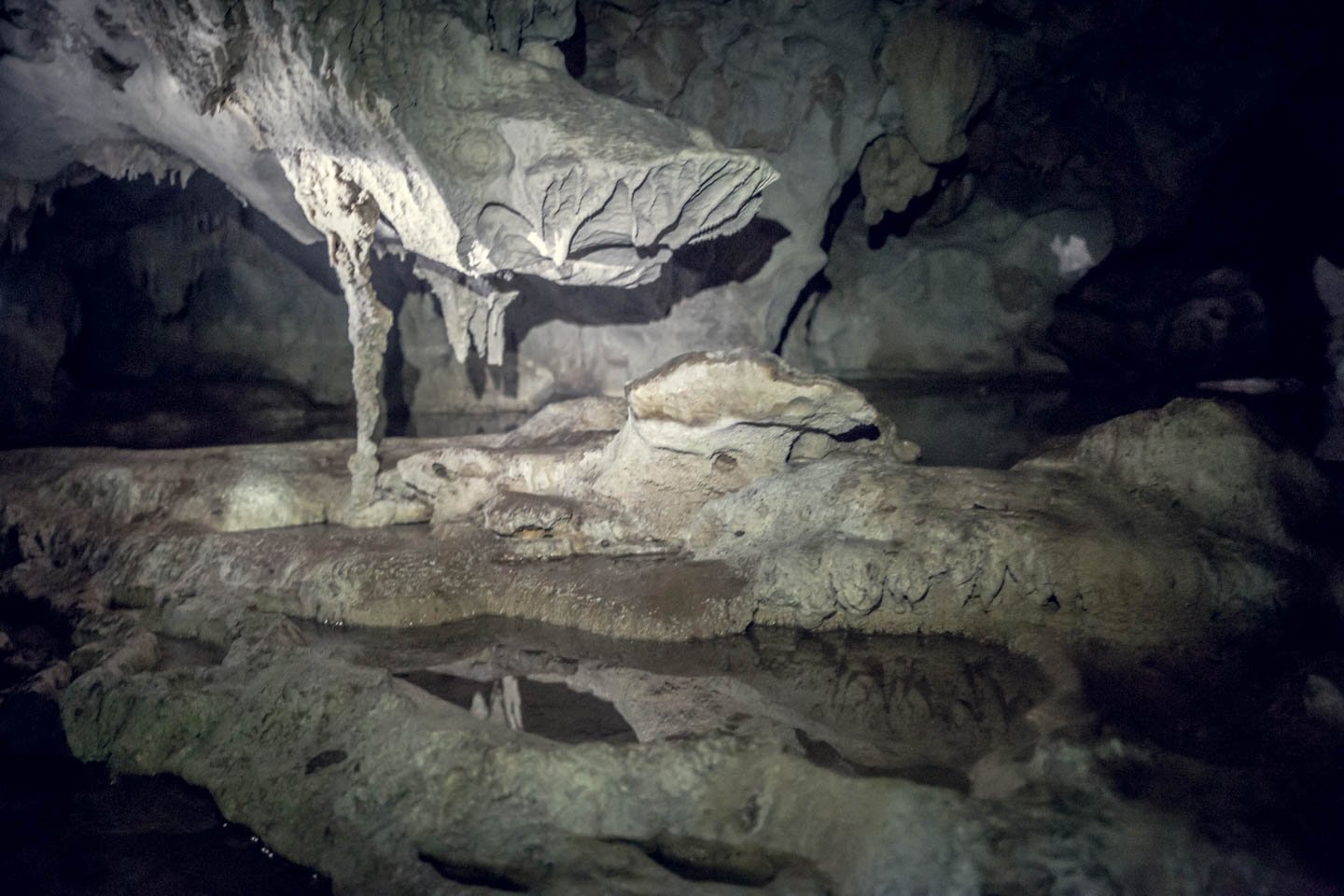 It was with sinking disappointment that we caught the first glimmer of light. The warm glow was dancing weakly through a small secondary entrance to the cave.

Our guide was suspiciously excited to keep us moving. He didn’t appear to be arachnophobic. He also genuinely seemed to be enjoying his job. Perhaps his desire to get out of the cave was due to the unfolding fun at the nearby village? Were we preventing him from joining the rowdy quinceañera celebrations?

It was none of the above. He had the glint in his eye of a seven year old about to show off his impressive new lego ferris wheel set.

As we stepped blinking into the light, we took a moment to absorb our surroundings. We had emerged from a tiny underground crack into a huge, towering rock cavern. Amply lit by the dappled light from the jungle above. This natural amphitheatre dwarfed our tiny trio against the sheer rock walls. The grand entrance towering metres above our heads.

What a welcome back from the underworld. 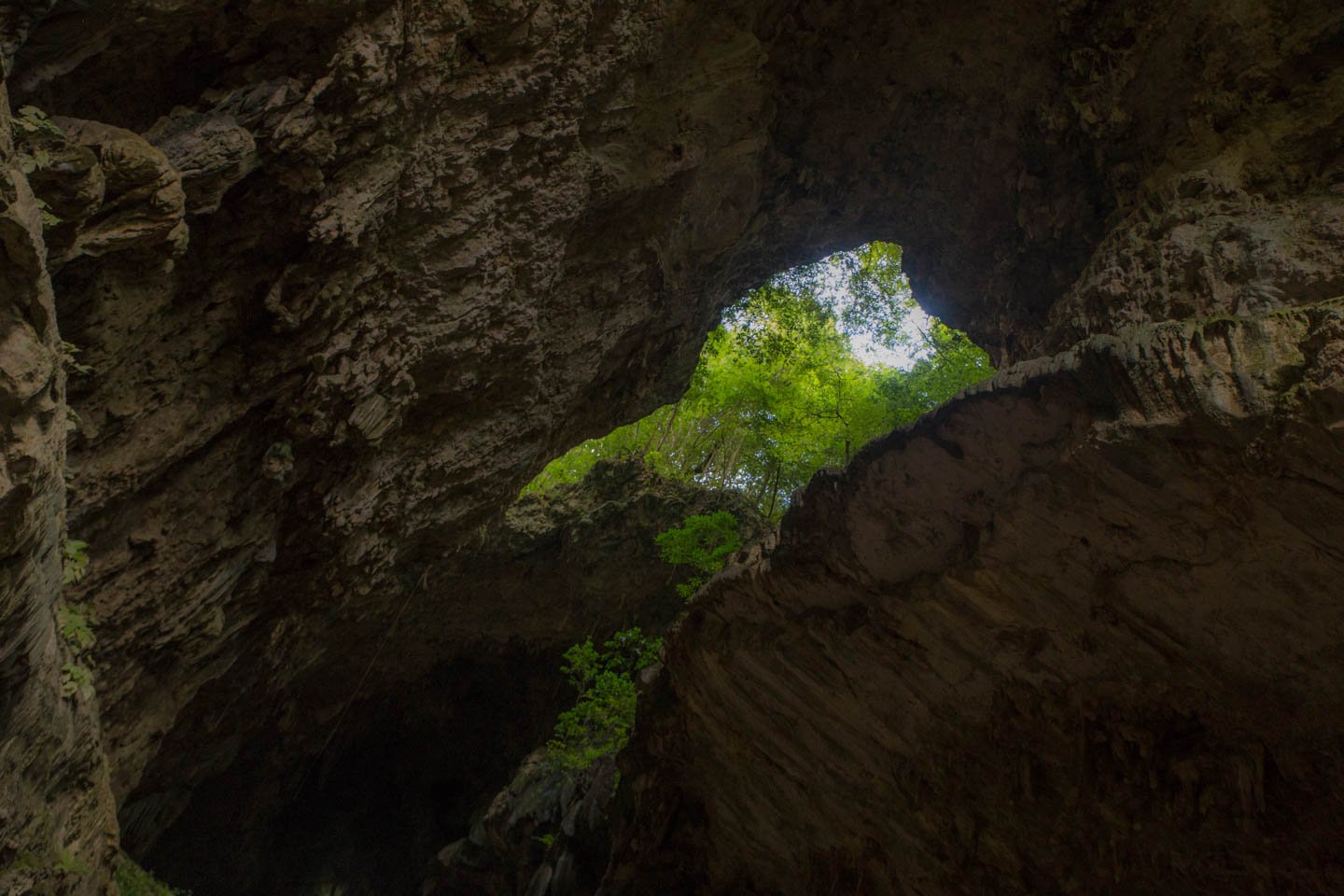 Our guide wound his way back towards our starting point by a new trail.

Before we realised it, we were back where we started. We were donning helmets, life jackets and selecting the cushiest inner tubes. It was time for the aquatic portion of our journey. 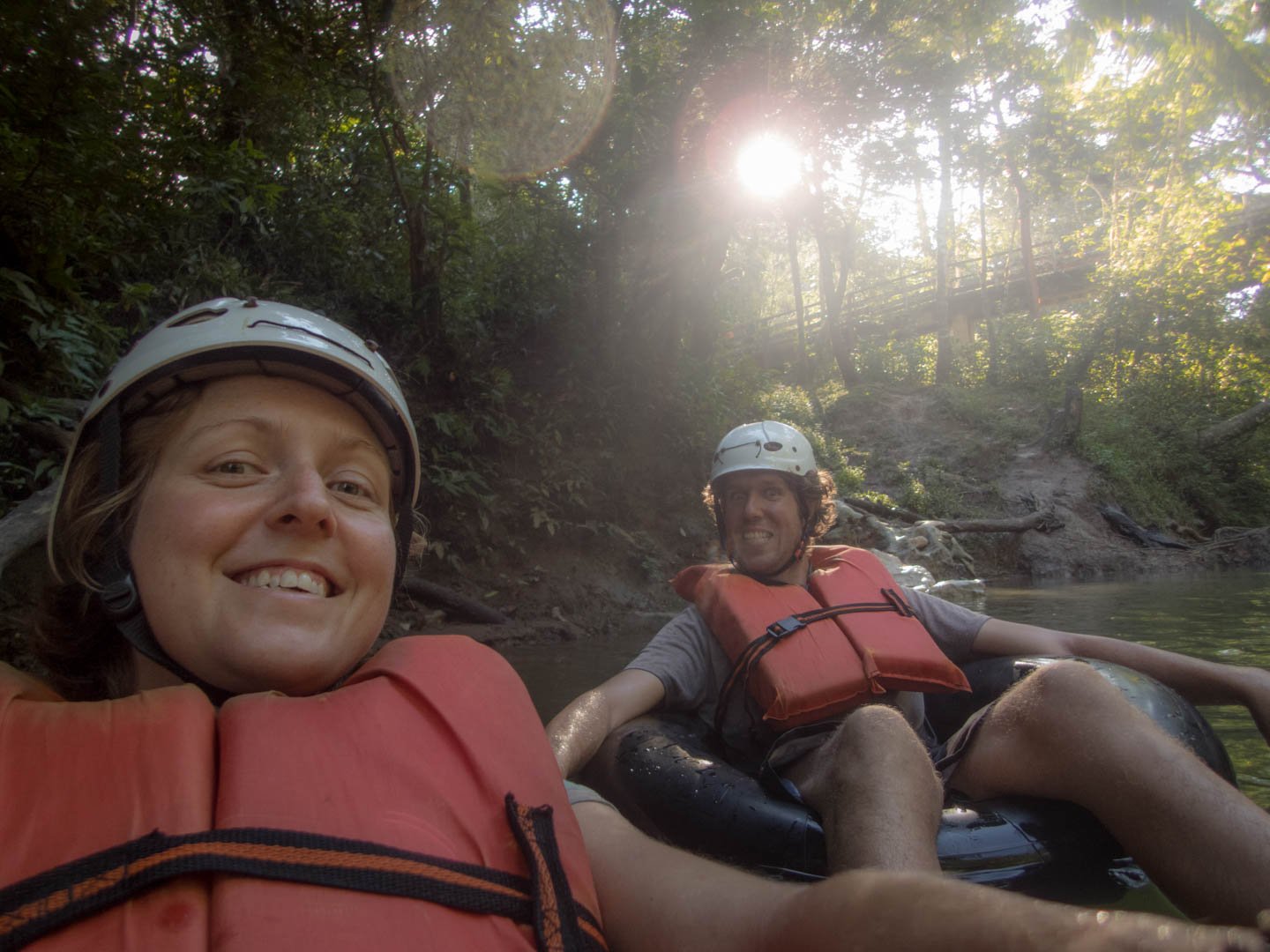 At times it was next to impossible to hear our guide over the roar of the river. With a combination of hand gestures and general good luck, no one was lost to the rapids or knocked unconscious by the low-hanging sections of ceiling.

Our tubes darted and bobbled through the swirling river. We often found ourselves in complete darkness. Lit weakly by the increasingly enfeebled glow from our failing headlamps. 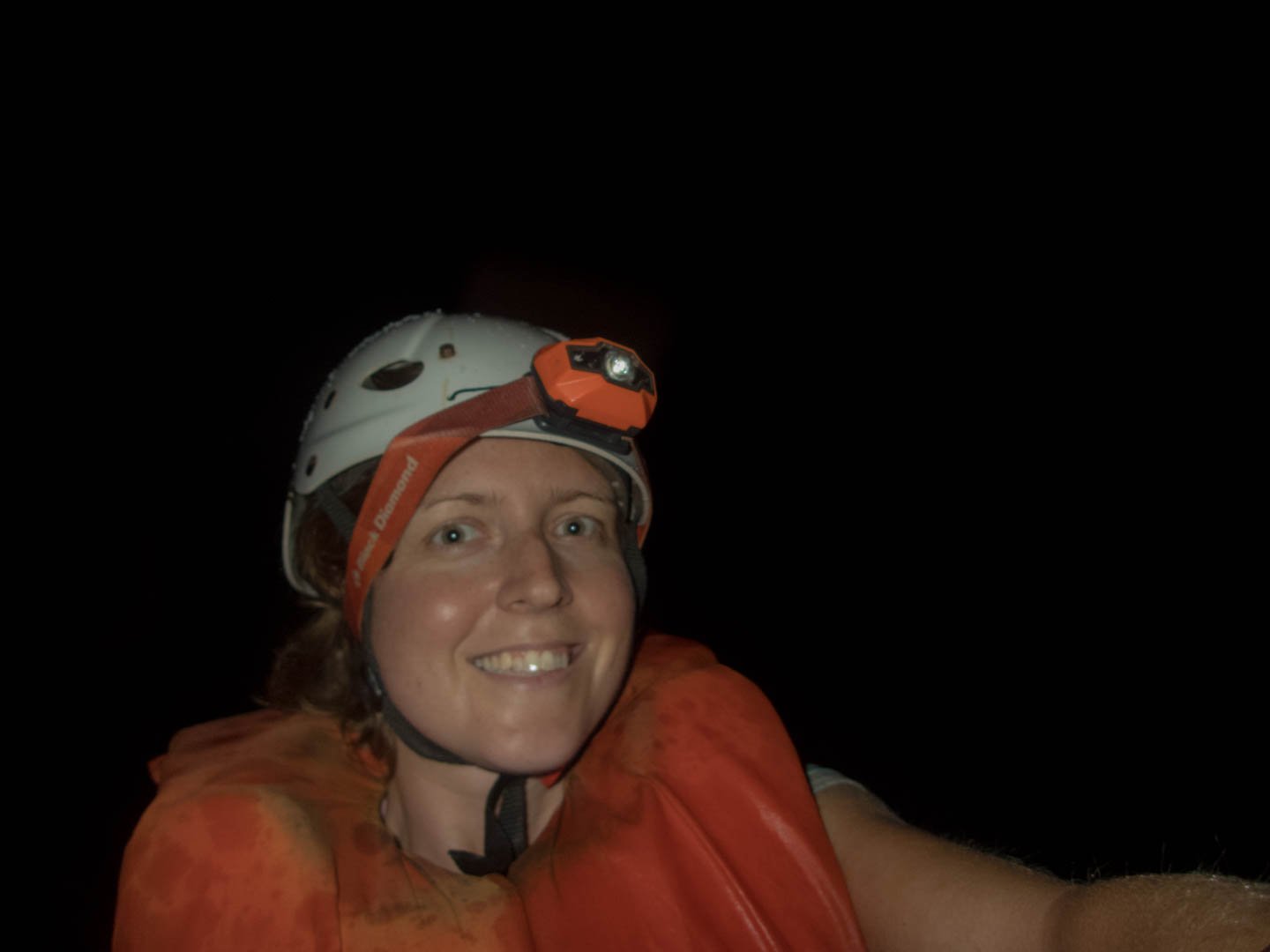 At times, when the river got a little wild, our guide would get us to tuck our feet into the inner tube in front. We travelled as an inner tube conga line. Trying not to unhook our chilled toes from the person in front and lose our way in the darkness. 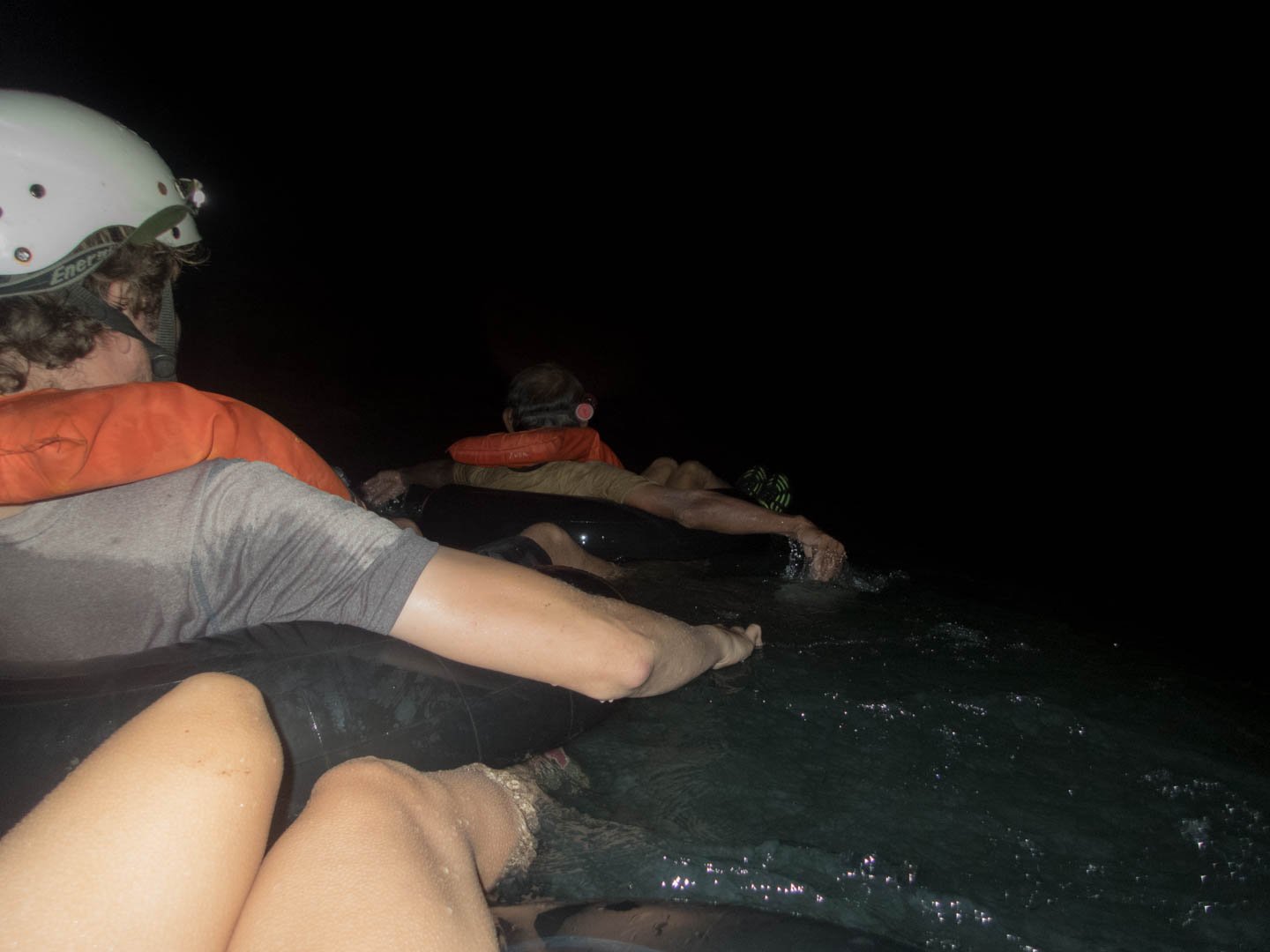 Every dangerous twist and turn seemed to energise our wiry guide more. He was grinning from ear to ear each time we emerged into an area open to the skies above.

Every now and again we would purposefully beach ourselves on a narrow rocky shelf. A plot to avoid a section of rapids, a swirling underground eddy, dangerous rocky outcrop or large chunks of forest flotsam, tree trunks lost to the river in times of flood.

But for the most part we just bobbed along in the darkness. A little floating island of dim light. Meandering through echoing underground chambers. Surrounded only by the darkness and the the roaring of underground rapids. Plus, of course, what we can only assume would be an enormous colony of water-loving octo-legged doom spiders of at least dinner plate size.

Then, suddenly we were done. That seemed short.

We again emerged into a huge atrium where the light shone down on us from a cave entrance above. The bright green glow from the jungle above reminded us just how useless our head lamps had become.

Our guide muttered about how fast the river had been. He told us it normally took a lot longer, but since the river was high we had finished the tour in record speed. Rather than rushing back to the quinceañera shindig, he suggested walking the long way back to get in a bit more sightseeing. 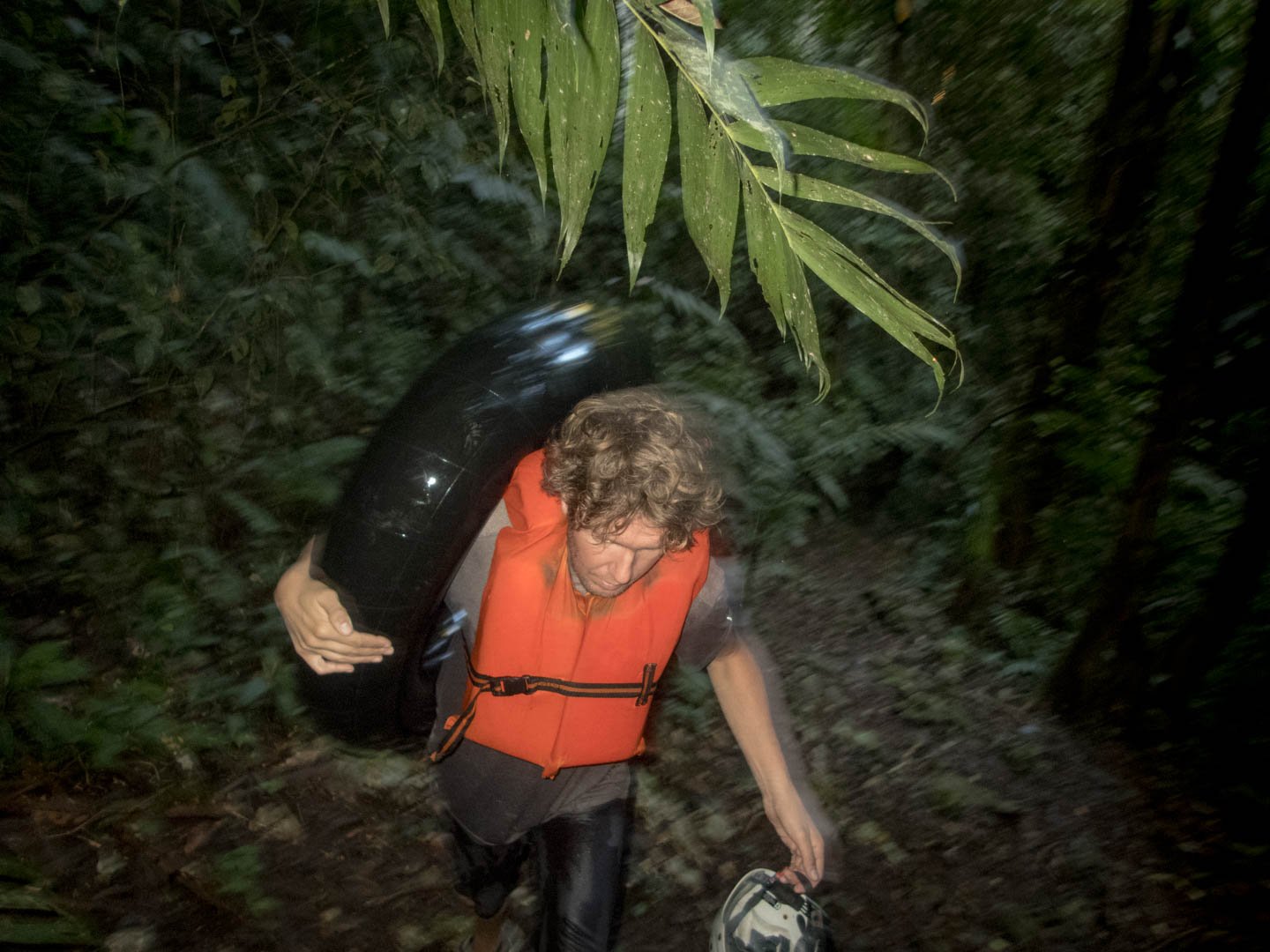 Trudging though a mosquito-filled jungle in wet shoes, carrying slippery inner-tubes isn’t ideal. Doing so whilst avoiding becoming lunch for jungle-spiders doesn’t sound like much fun. But when a little old man, well past retirement age, suggests taking and extended detour. When he does this at the end of what is likely his 4,000th cave-tubing expedition. When he still looks like he is having the time of his life, you don’t say ‘no’.

The detour took us through another cavernous natural amphitheatre. A fittingly grand end to another day spent exploring the mysteries of the Mayan underworld. 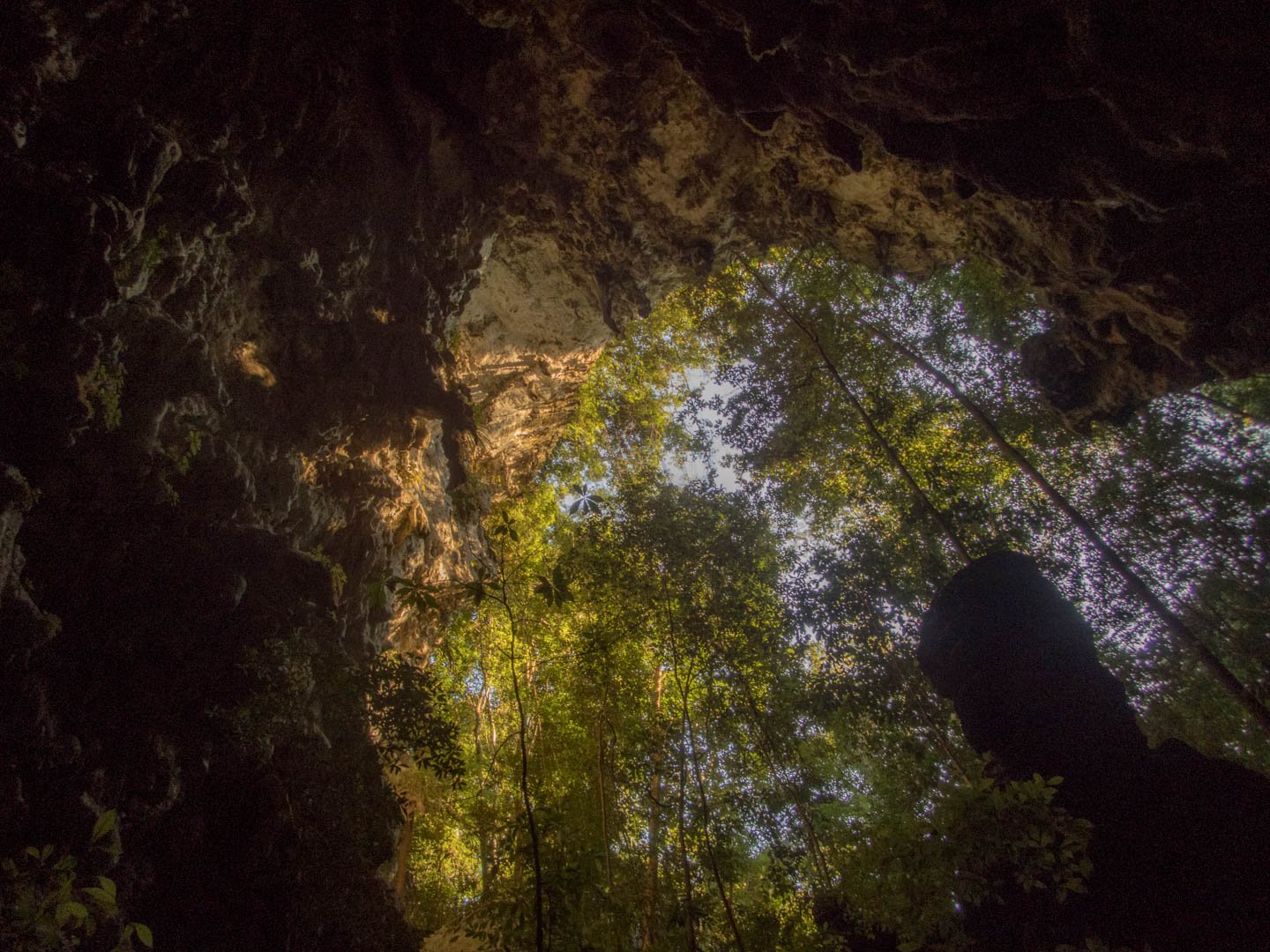 We had considered setting up camp in the visitor carpark. But the raucus quinciañera was now in full swing. A few tone-deaf relatives were now cranking up the karaoke machine to 11.

We opted to hit the road and seek a quieter spot for the evening.

…was that our guide we could now performing rousing renditions of songs on the karaoke? … surely not. 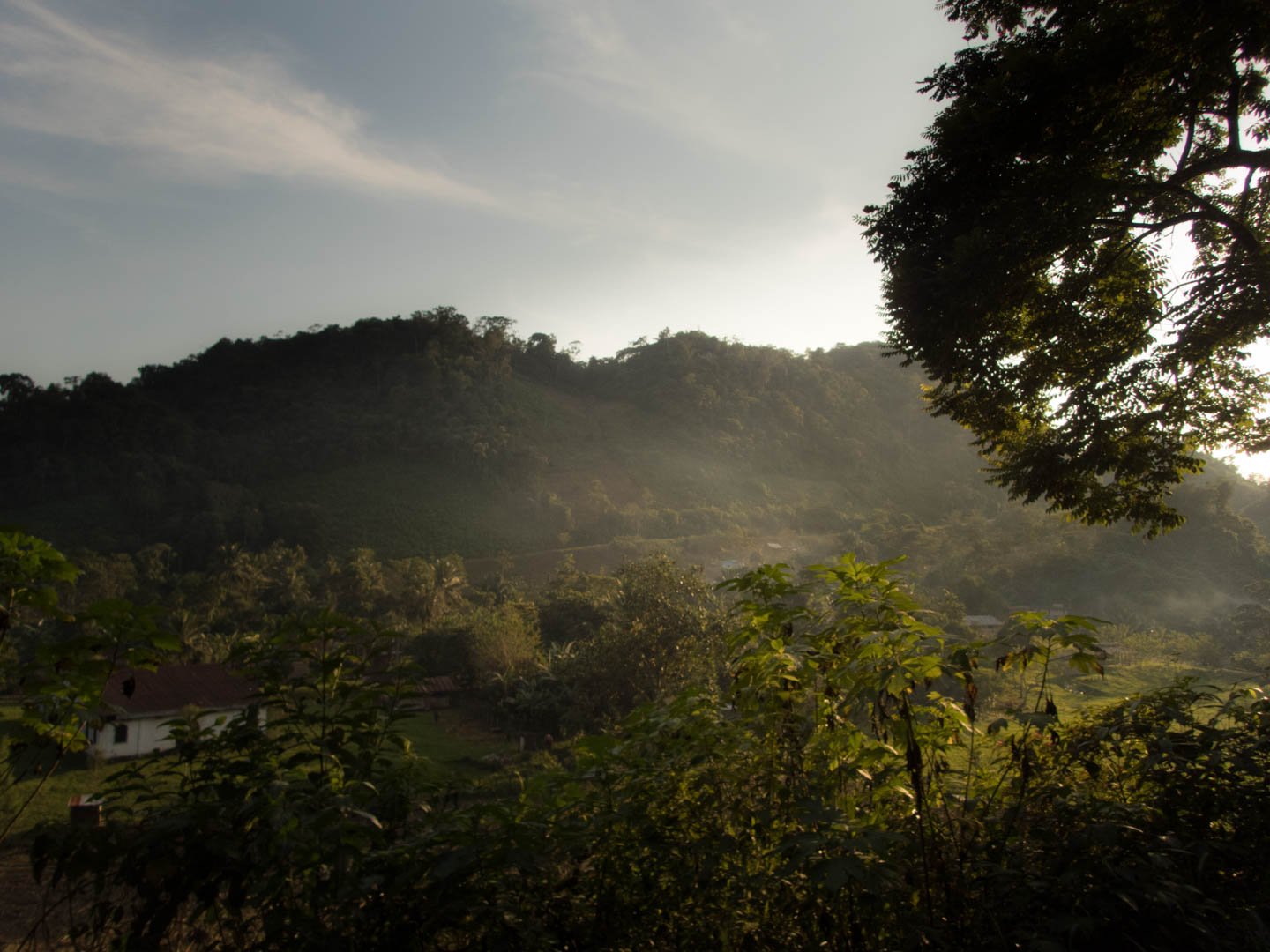