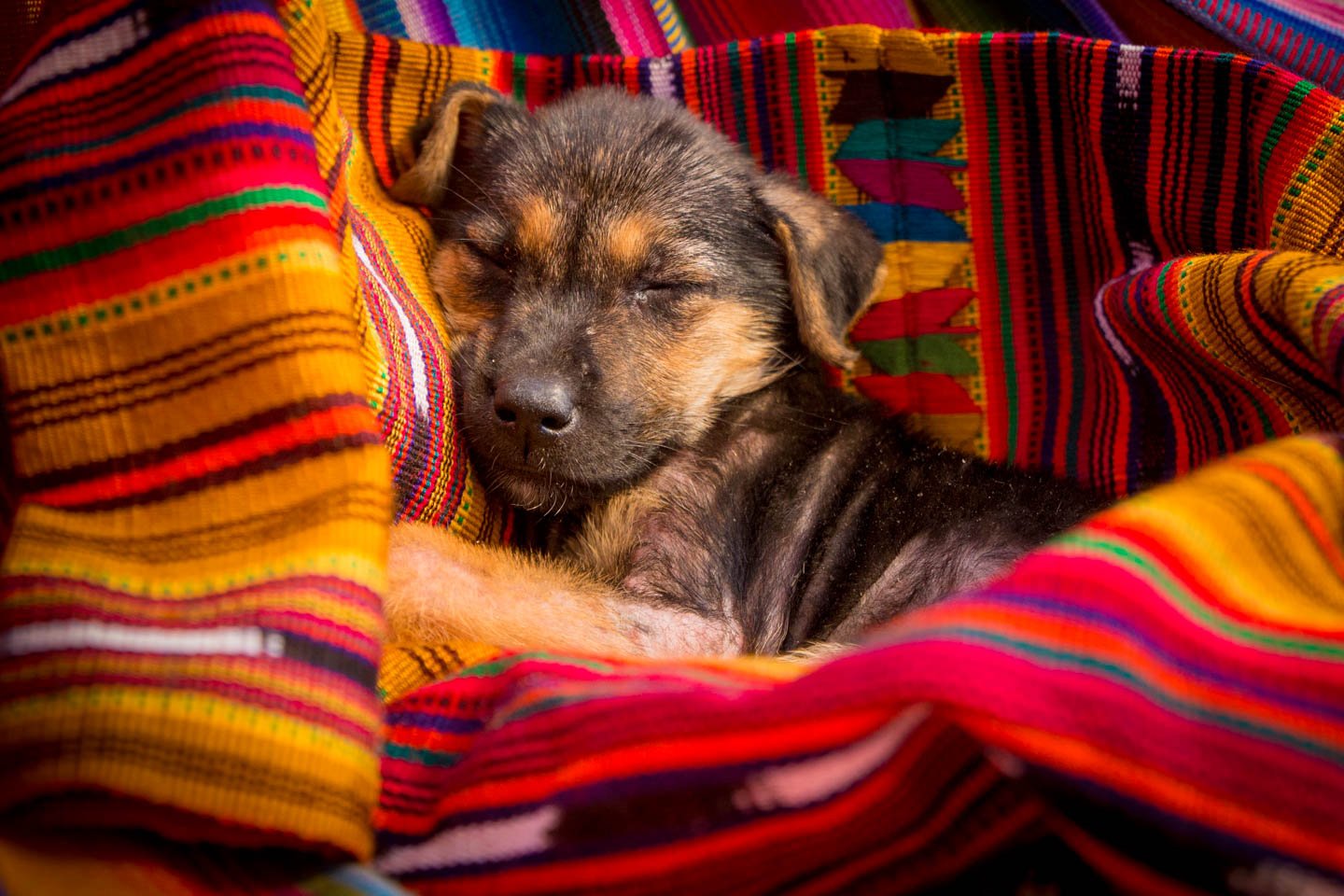 The day dawned clear and cool. We awoke to clear skies above our camp spot at the foot of the volcano.

We could now tick:

☑ Watch one volcano erupt from the summit of another

Ok. Technically there was no actual list. But if there were. That one would now have a big tick beside it.

With no more unfinished business in the area, it was time to move on from Antigua, from Guatemala, even. We were ready to drive to El Salvador. 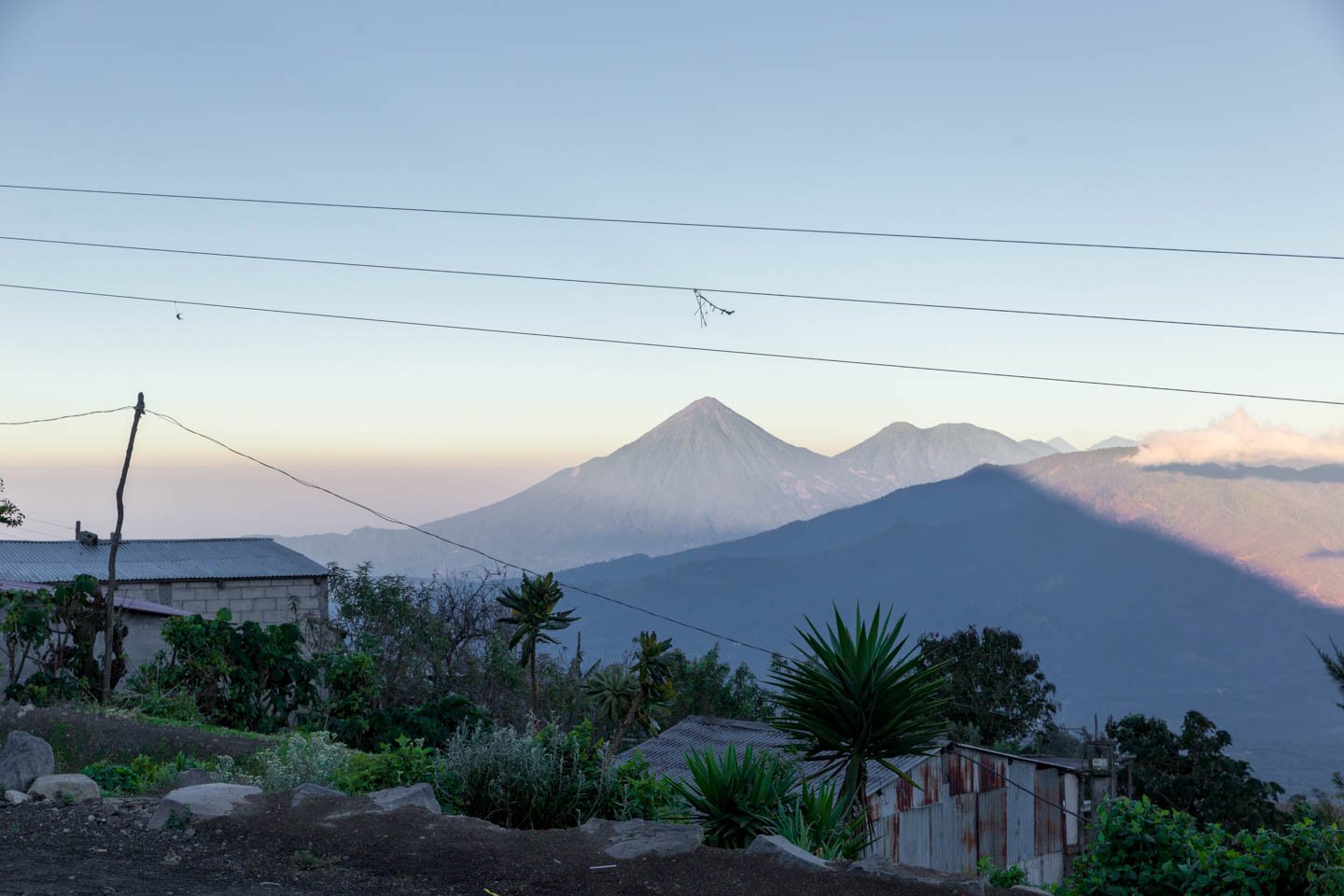 That’s what had been hidden behind the cloud last time we were here!

First stop was some hot showers at a nice bed and breakfast just out of Antigua though. (Of course we couldn’t resist one last stop!)

We wove our way along the winding roads in the early morning light. Tired from the previous days volcano walk, our thoughts were drifting back to the spectacular scenes of Fuego erupting that had filled our dreams the night before. Each lost in our own thoughts as we made our way back towards Antigua.

Suddenly, the contemplative silence was broken “Look—there’s a tiny puppy in that bag of rubbish.”

By the time we had slowed down, made a u-turn and spotted the bag of rubbish again, it was next to impossible to spot the puppy. 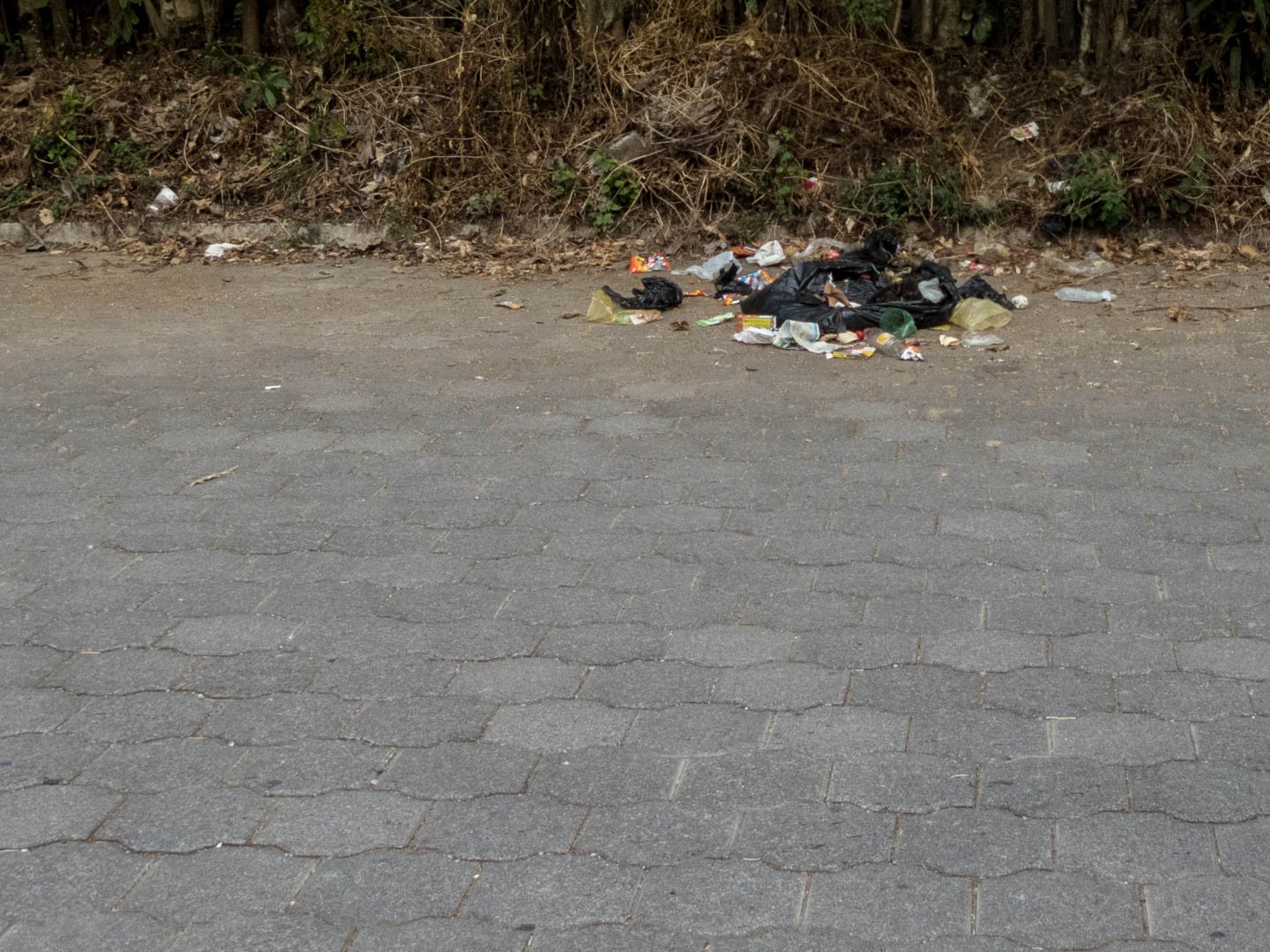 Can you spot her?

There are a lot of stray dogs in Guatemala. We, being crazy dog people, often have a bit of dry dog food on hand to feed hungry strays that visit our camp sites.

Emma hopped out of the car with a handful of dog food and offered it to the tiny creature.

The puppy was so hungry she indiscriminately chomped on dog food and fingers until it was all gone. (The dog food. All fingers are still miraculously intact.)

She was very young and very alone, with no people or dogs around. With her thinning fur and spindly legs, there was no way we were leaving the little critter alone on the roadside.

She was living in a rubbish bag. Can’t really blame her for that one.

So that’s how a short time later we found ourselves in the waiting room of a vet in Antigua with a very small puppy in tow. 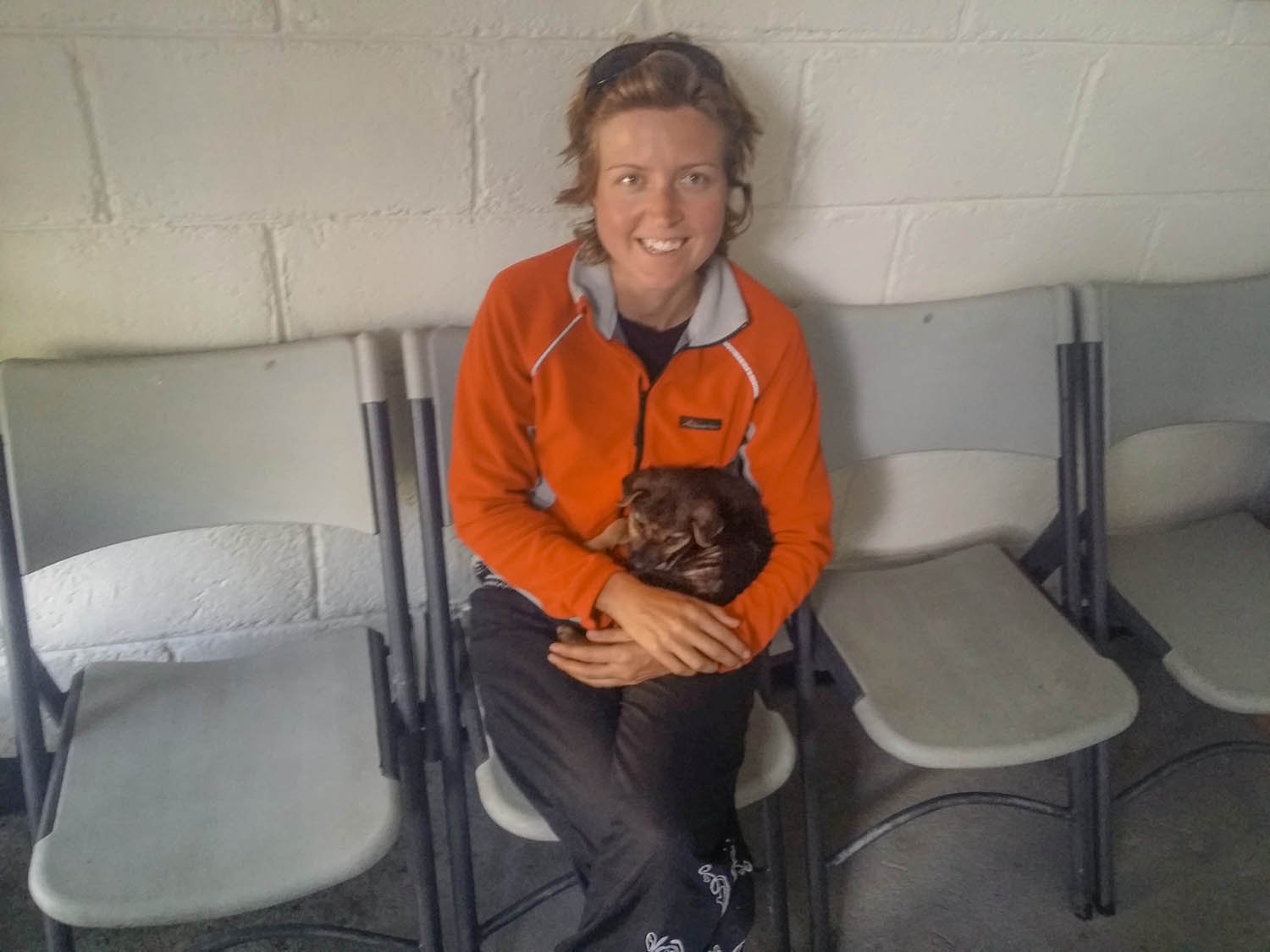 After a check up from the vet she was given a bath and a parasite treatment—and miraculously, a mostly clean bill of health.

The vet sent us away with a big bag of puppy food and instructions to fatten her up. We also needed to bathe her twice daily to soothe her infected skin.

He said she was in good condition for an abandoned puppy, no obvious serious health concerns. The vet warned us that there was no guarantees for her health as she was so young and unvaccinated against everything. She was skinny, balding and weak. But he told us that with proper care, her skin would heal fast. Her fur would grow back once she was receiving proper care and attention.

She wasn’t well enough to face any vaccines just yet, he wanted to make sure she wasn’t incubating any undetectable diseases first.

As she came running back to us to escape the mean vet nurses who had dared to bathe her, the vet suggested that sure, we could drop her at a local animal rescue… or she could stay with us.

Either way, he said she might as well spend the next week hanging out with us, then we could bring her back for a checkup, some vaccines and could make the decision about what to do with the wee critter after that.

It looked like it wasn’t quite time for El Salvador yet.

All up, it didn’t take her long to settle in, she was pretty relaxed about her lifestyle change.

Sure, she was a little bald. But she was getting happier and healthier by the day. 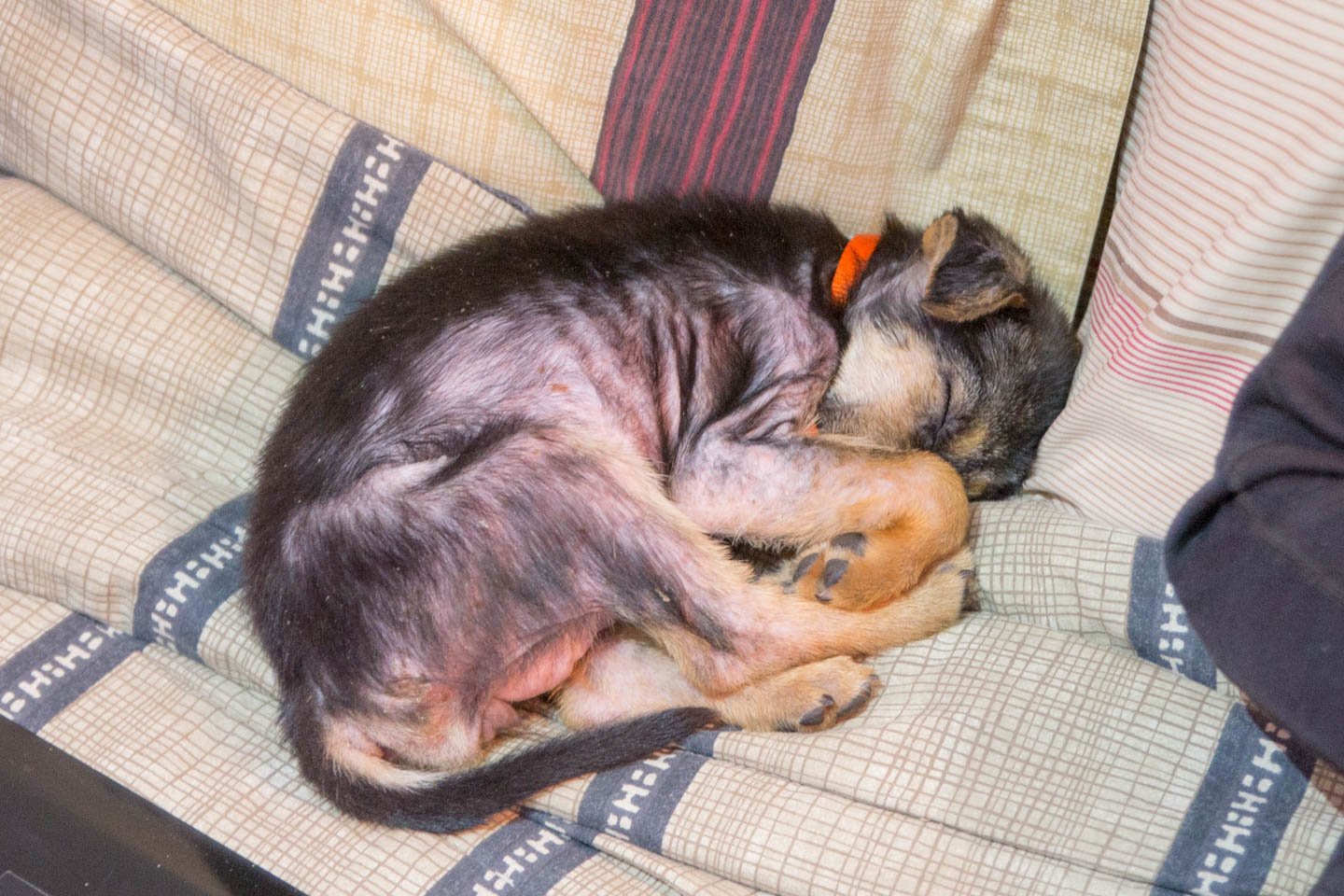 She immediately adapted to the upgrade from rubbish bag to luxury bedding. 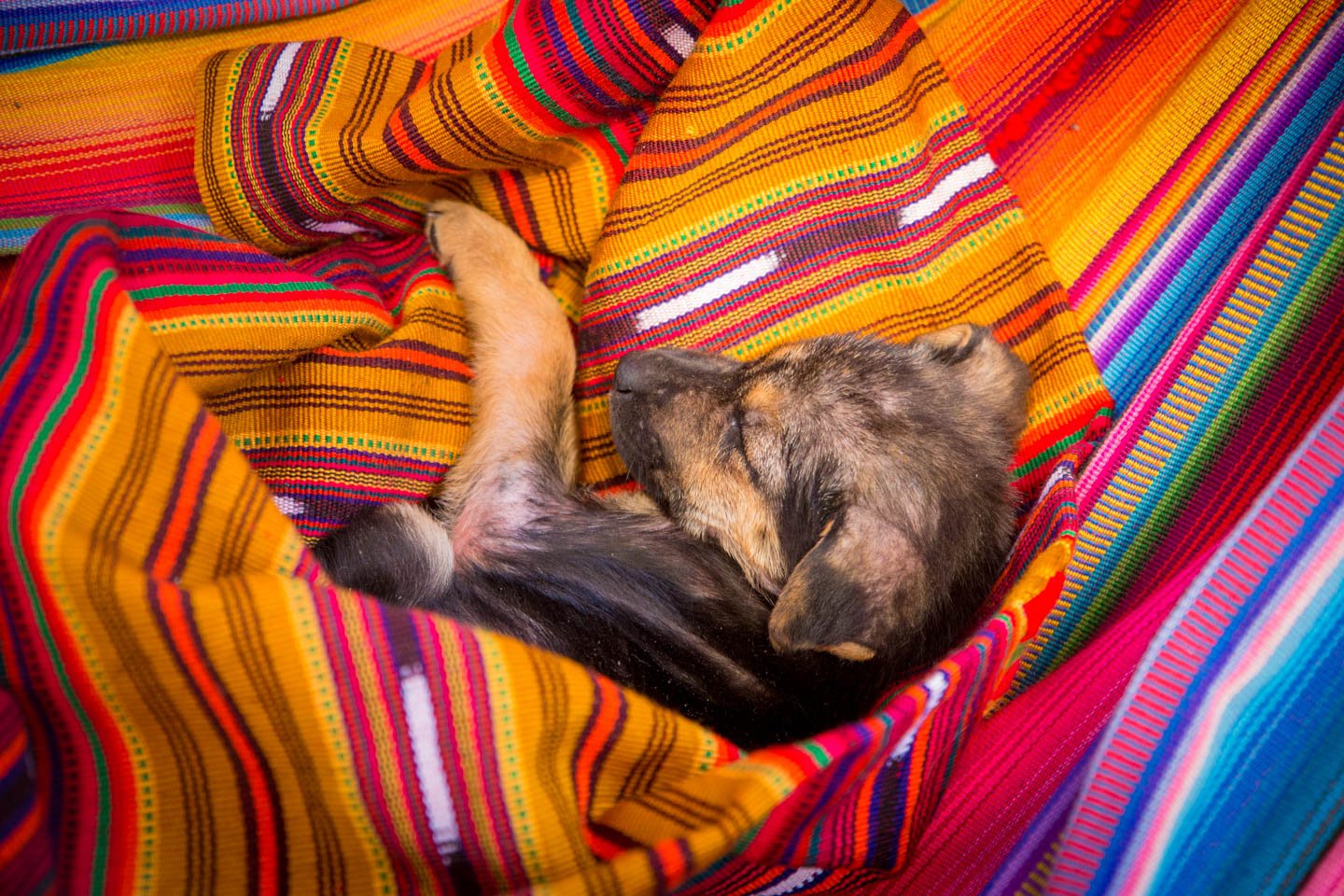 An afternoon nap in a the sun in a comfy hammock beats a chilly night sleeping out in a rubbish bag any day. 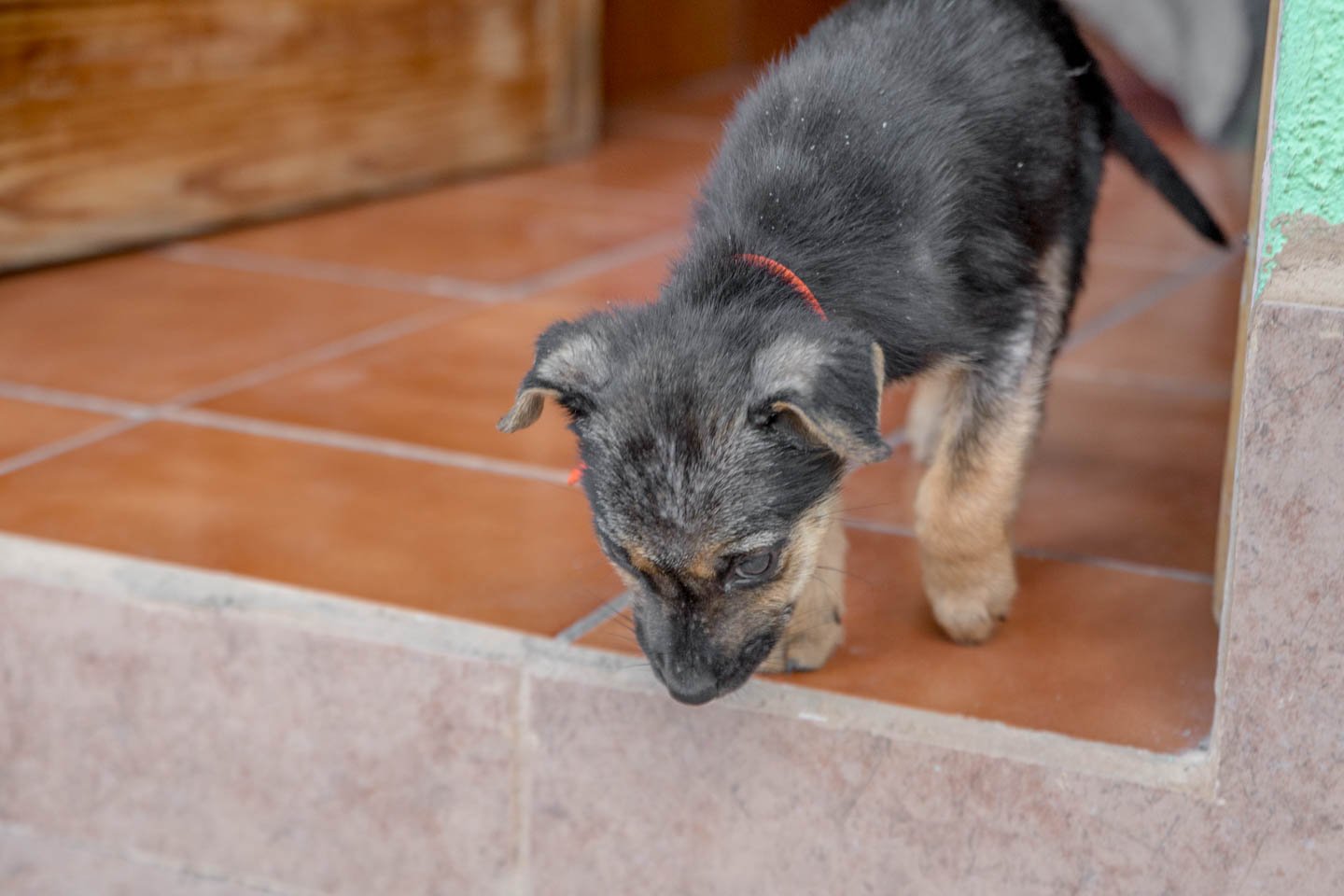 Soon, she was feeling a lot better and she started to cautiously explore the patio of the bed and breakfast we were staying.

Although, she found the twice daily bath time to be a little traumatic. 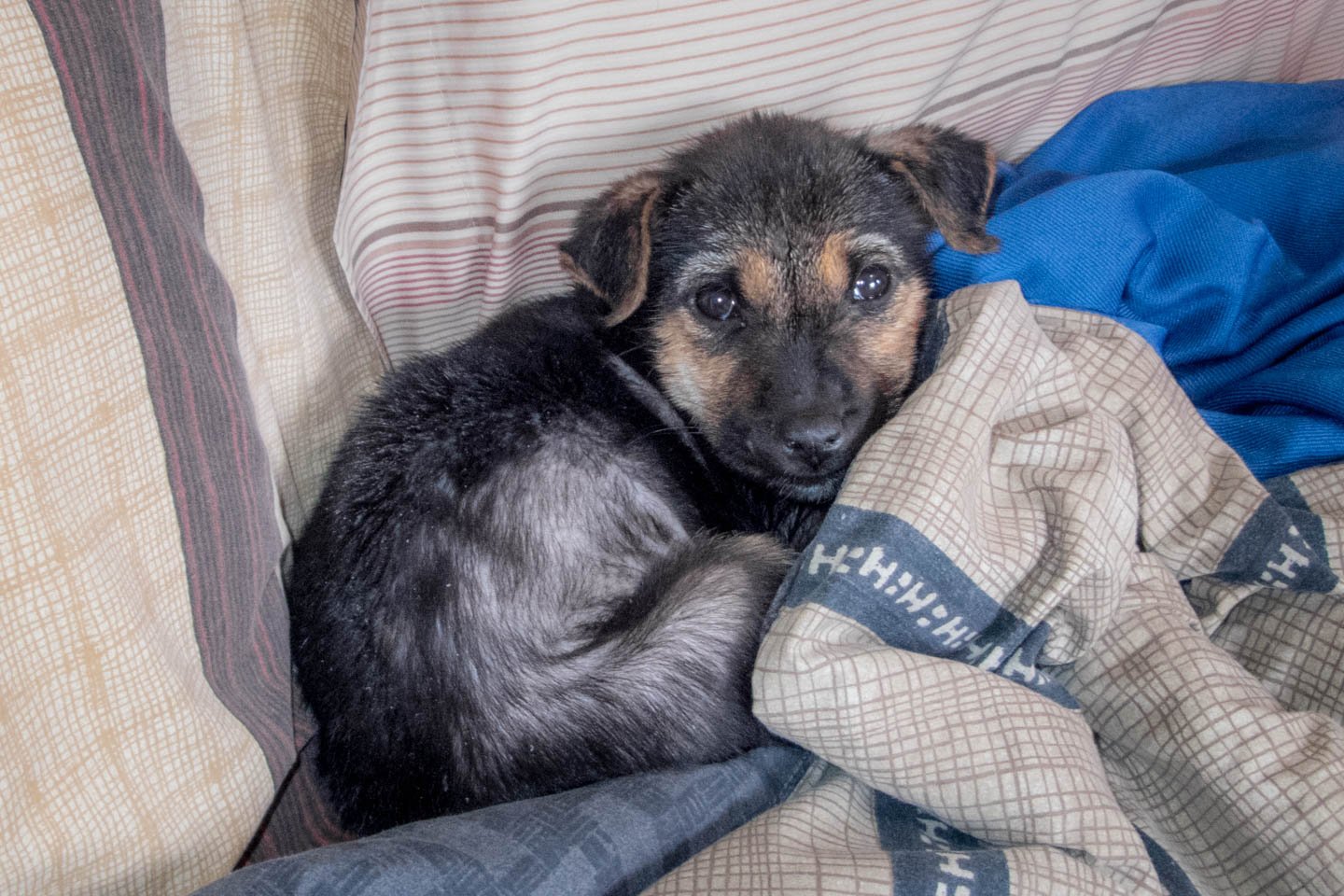 But it wasn’t long before she was looking a lot stronger and fluffier. She looked like she was ready for adventure. 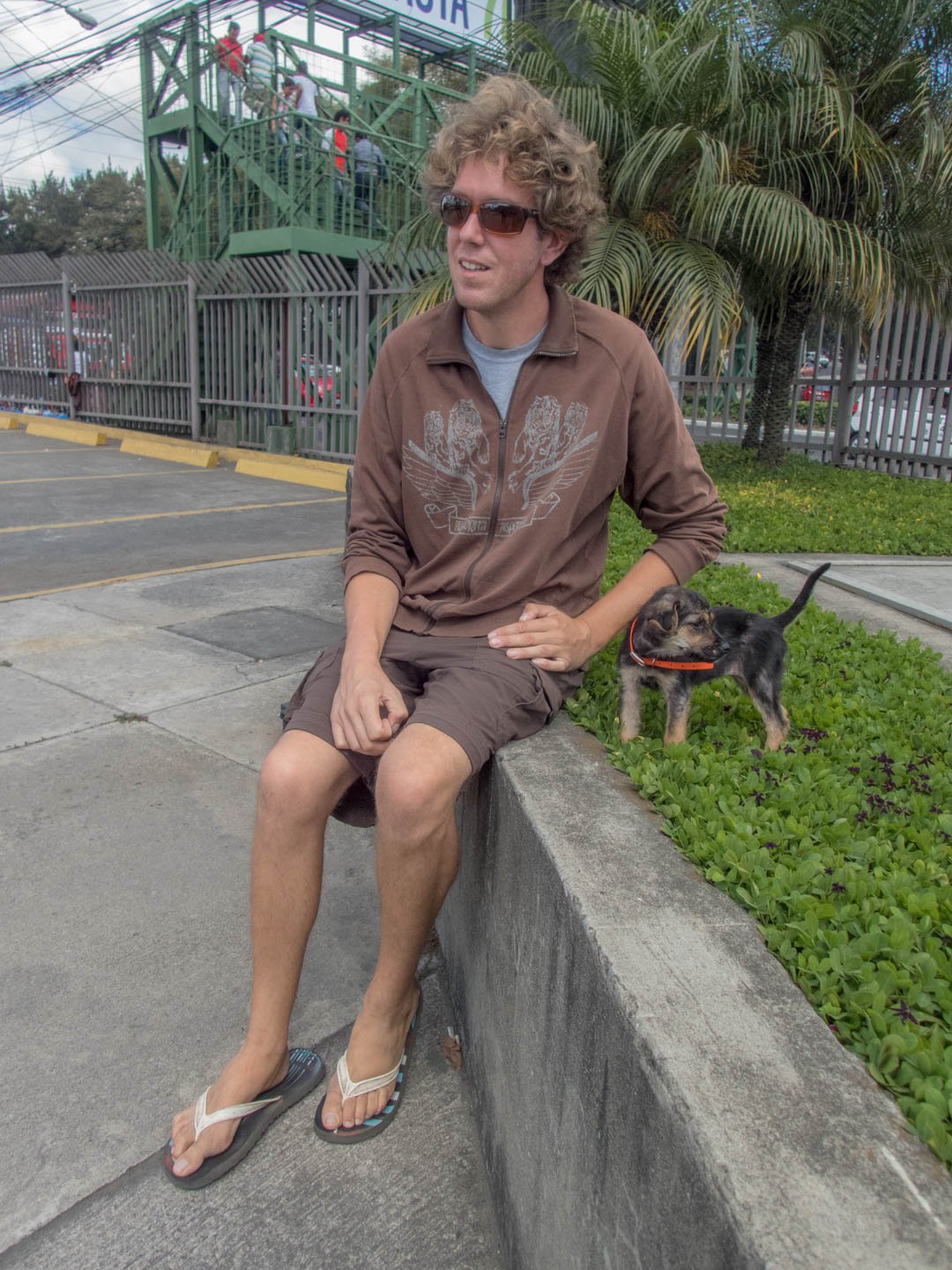 The bold little pup was not a fan of the cold.

So we started with a trip to the warm coast. We found a great camp spot right by a luxurious ocean-side swimming pool.

Although our little four-legged friend quickly learned that you can’t just walk out into a swimming pool. She did however master the emergency doggy paddle.

Ok. I don’t even know what just happened. But that was a LOT like a bath.

Happy to be back on land.

Not a fan of swimming she instead took her new role as jandal guard very seriously. 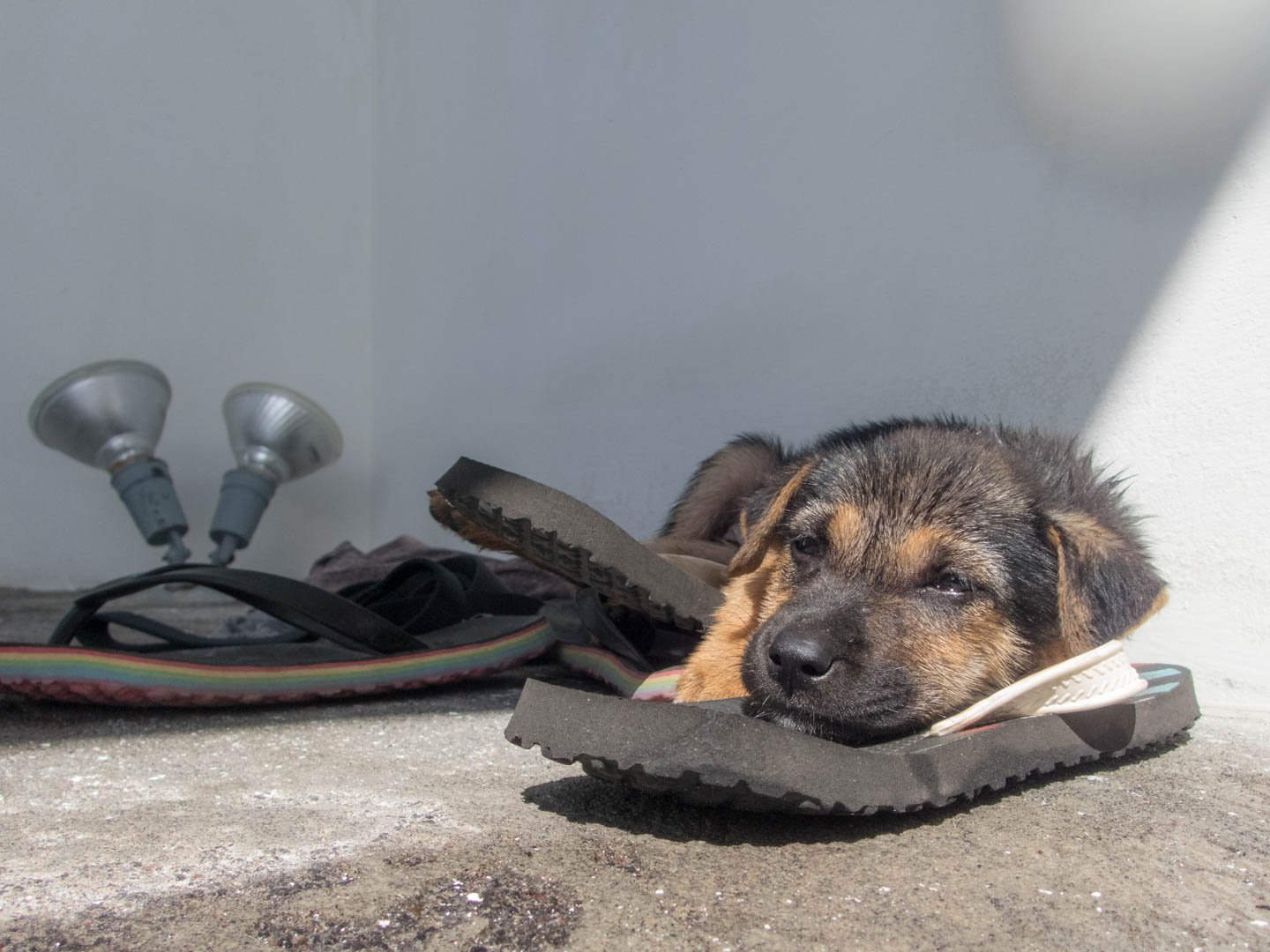 But, ultimately, the warm coastal weather was even a bit much for a tiny pup. 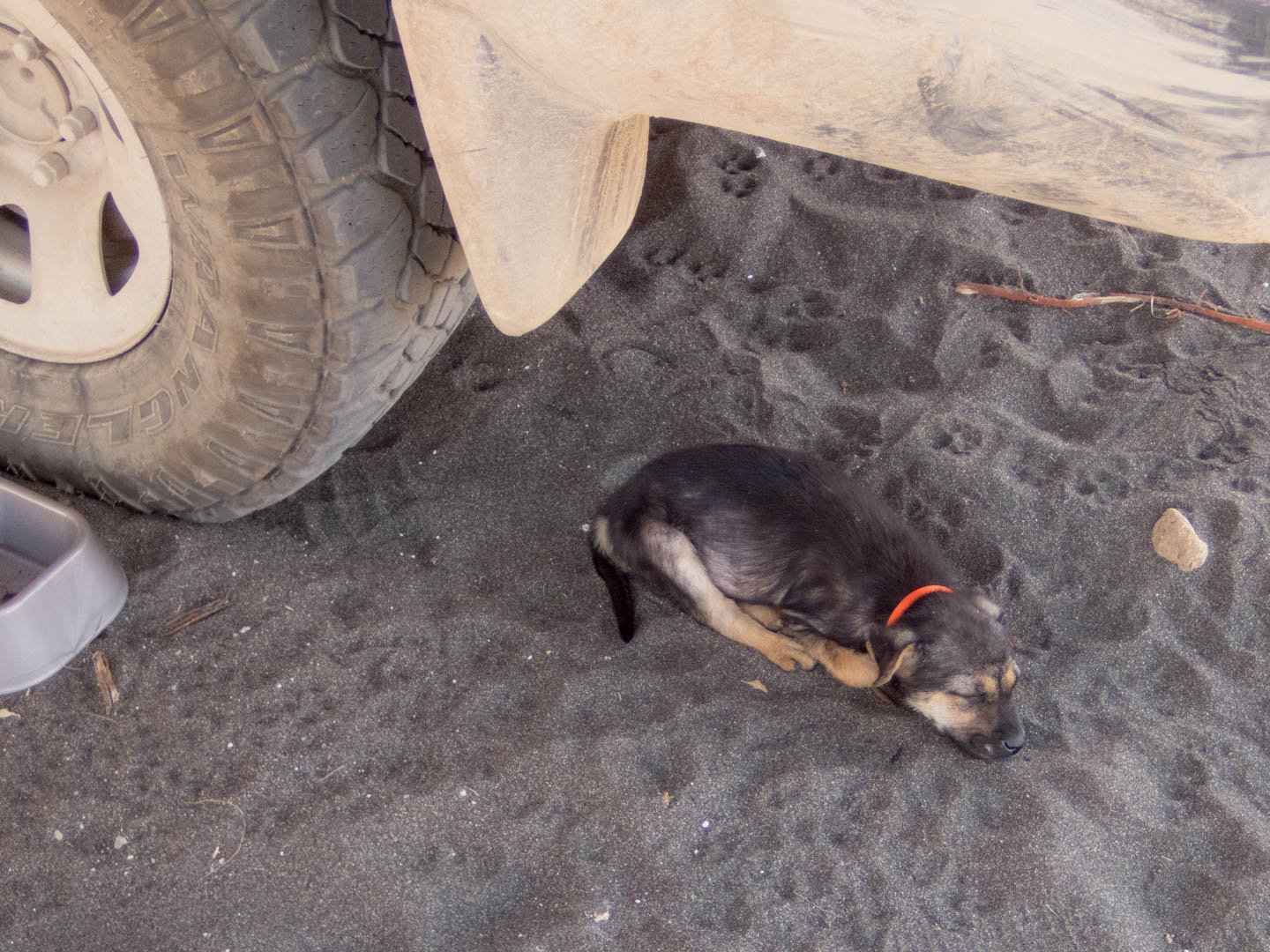 She soon discovered that the cool sand under the car was the best spot to spend the hot afternoons.

The crashing ocean waves were far too terrifying to approach. But long morning and evening walks on the cool, wet sand were exactly her kind of fun. 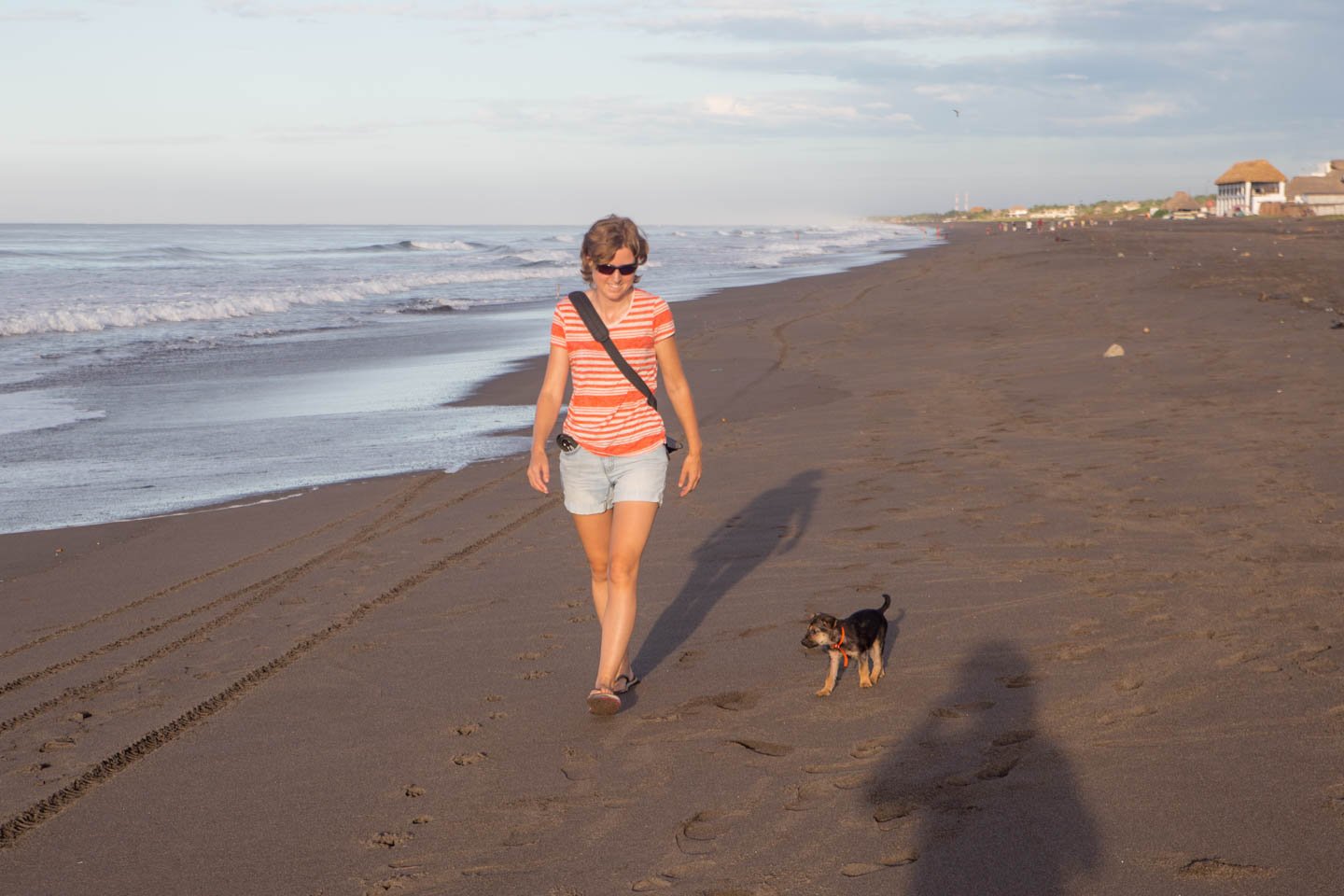 We enjoyed our time on the beach too.

Hammocks, beach side beers and spectacular sunsets more than made up for the sweltering afternoon heat. 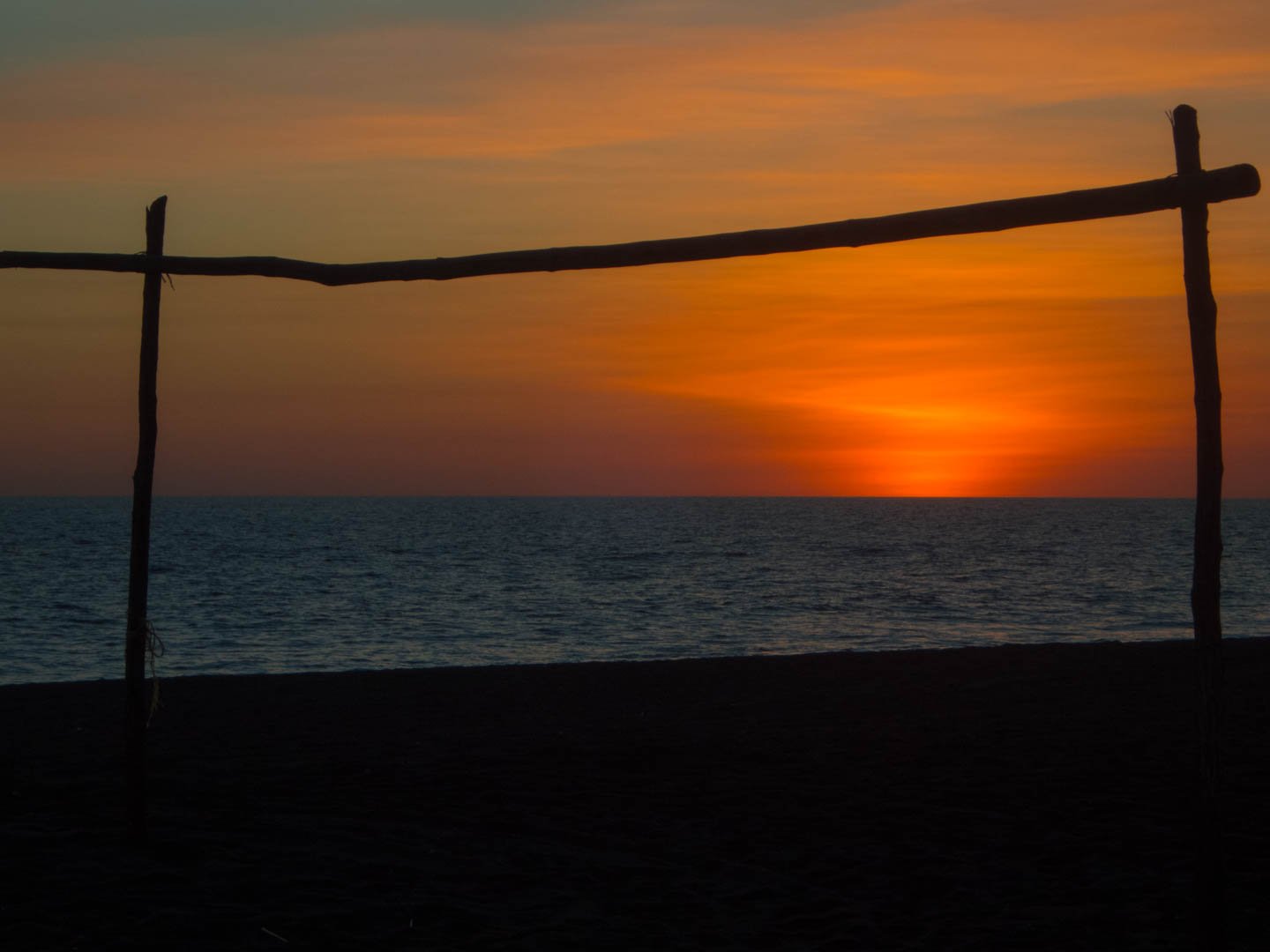 But we only had a few days before we were to return to Antigua.