The cliffs of Miraflores 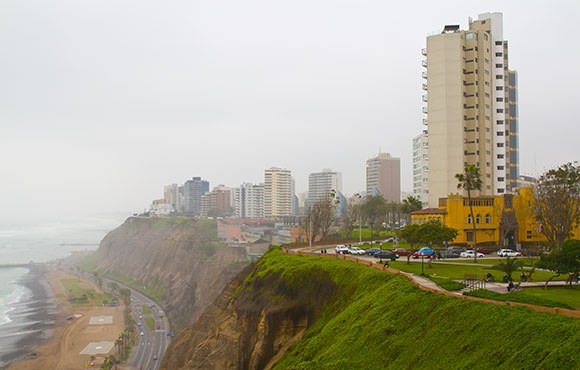 This week’s photo comes to you from Lima, Peru, taken from the feet not-so-firmly-on-the-ground vantage point of a tandem paraglider. Lima was an exciting and interesting city to visit and what better way to see the fancy beach-front neighbourhood of Miraflores than from the air?

It was out last day in Lima and the Paragliders hadn’t been flying all day because the wind had been too low, but we popped back in the afternoon to find that the wind had picked up enough for a flight…sort of.

In the capable hands of a paragliding guide, I was securely strapped into a tandem harness. In a move that seems to defy all logic, we then ran towards the cliff edge—and we were airborne.

The city, cliffs and ocean sprawled out beneath, huge multi-storey buildings jutted out above lush green parks on the cliff edge. We flew low above Larcomar—the fancy shopping mall that is nestled into the cliff edge—startling shoppers as they sipped their lattes high above the Pacific Ocean. But the low winds meant we couldn’t get enough altitude to explore too far afield. Initially we gained altitude fast, before long we were weaving up above the highest buildings, but as the wind faded we were struggling to stay at the level of the cliffs and soon we had to cut our journey short and landed in a volleyball court at the base of the cliffs—making the day of some kids playing volleyball nearby.

A quick ride in a taxi had me back to the cliff top starting point and Ben who had just started to wonder where I had disappeared to.