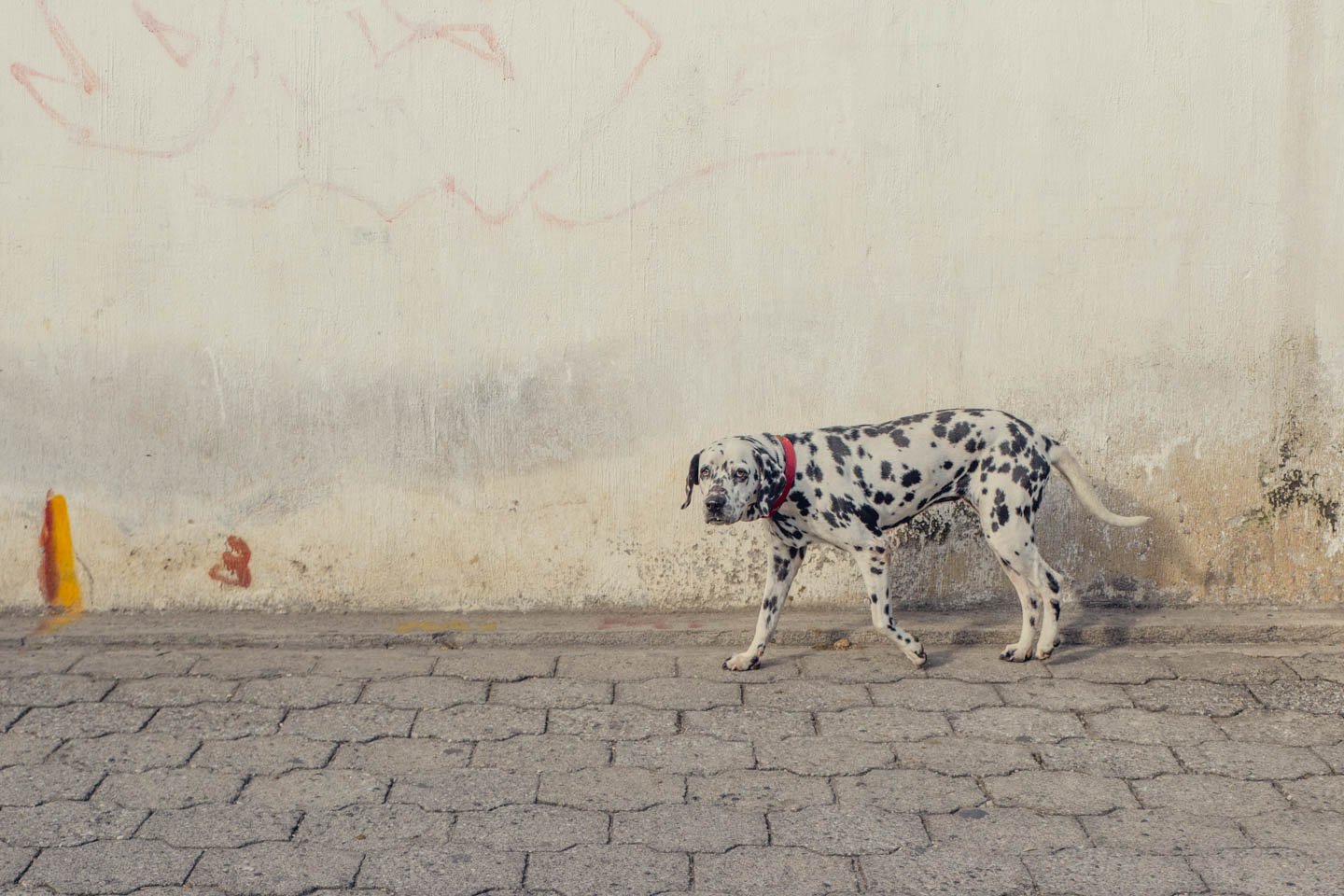 The town of San Pedro la Laguna sits on the shore of Lago Atitlán. This town is awash with Spanish schools. Much like Starbucks stores in the US or 7 Elevens in Bangkok. You can stand at the doorway of one and see the sign for the next one just down the road. This over-abundance could make selecting a Spanish school either very easy or very difficult.

Luckily, we had chosen ours in advance. We booked ourselves in for some classes at Corazón Maya Spanish school.

We chose Corazón Maya after speaking to several travellers who had studied there and only had good things to say about it. Some of those things were even said in Spanish. It was sounding promising. 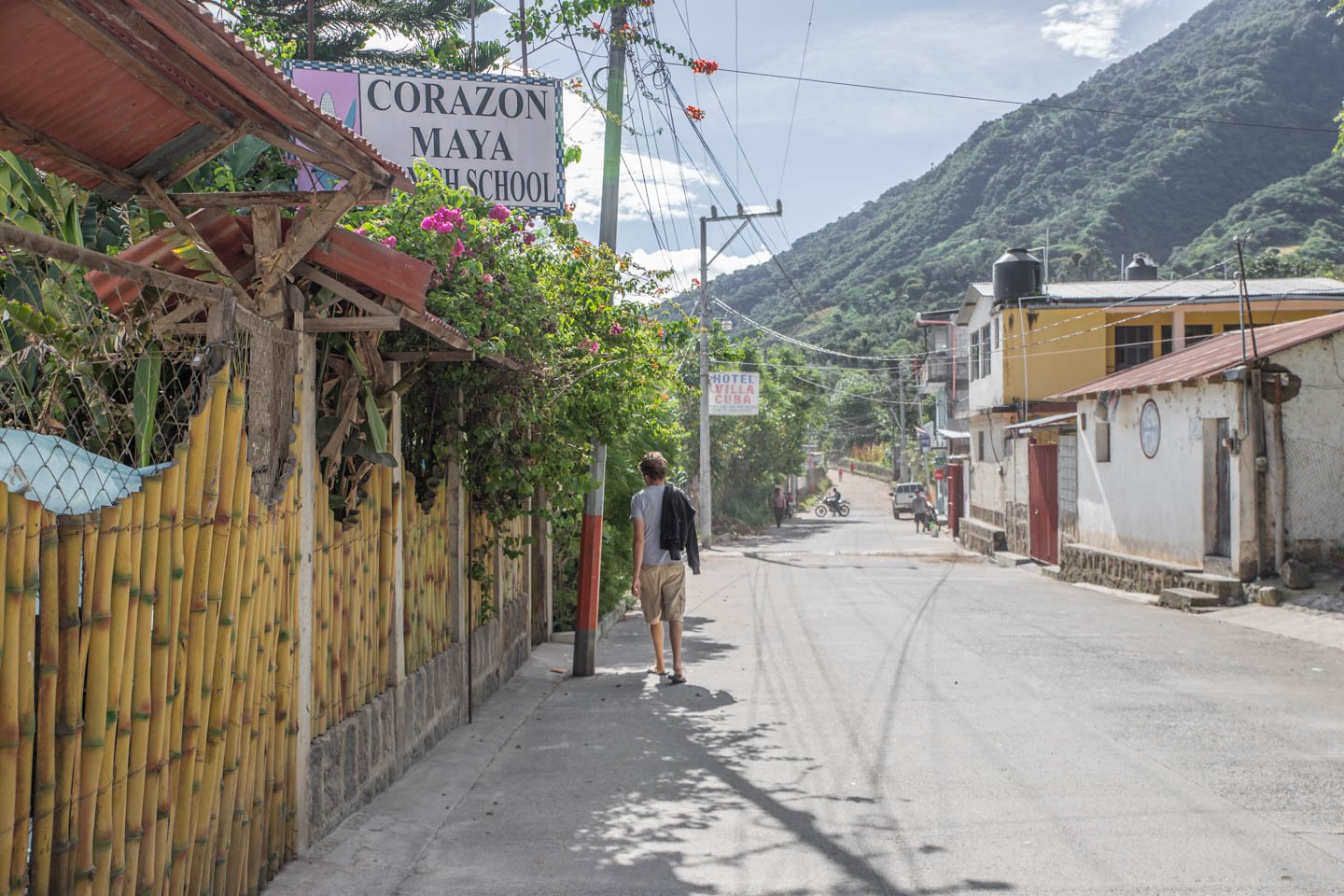 Our Spanish school located on the outskirts of town at the base of the imposing Volcán San Pedro.

The school is located on the edge of town away from the bustling backpacker, cafe, bar and restaurant-filled centre. Perhaps not as convenient to fast broadband, lattes, flaky croissants and “Smokin’ Joes’ Sunday All You Can Eat Barbecue Extravaganza” as some of the schools in town. But all of this remained within walking distance, with the added bonus of fewer tuk-tuks roaring past the front gate day and night. 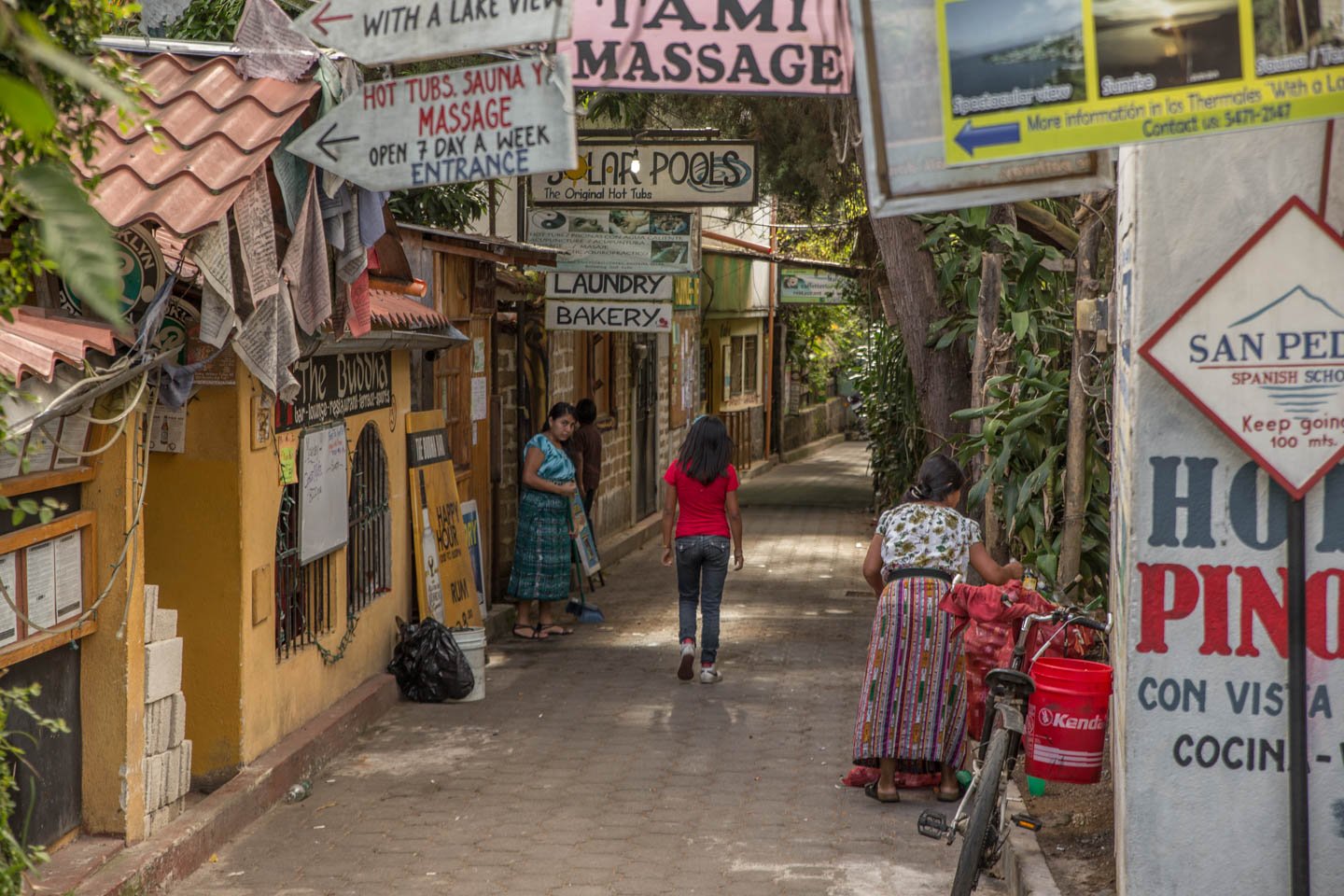 The school is a family operated business, with matriarch Marta and her children taking care of most of the day-to-day running of the school. Classes in Spanish are not the only option, also available are lessons in Tz’utujil, the local Mayan dialect. We opted to focus on the more broadly spoken Spanish language. We did learn a small handful of words in Tz’utujil. I’m sure our pronunciation was abysmal.

One of the fantastic things about this region is how actively the unique cultures of each area are preserved. Traditional locally made clothing is more common to see on the streets of San Pedro than the cheap imported ‘western’ clothing. The different dialects are spoken every day and taught in schools alongside Spanish. People are fiercely proud of their Mayan heritage. Unlike other places we have visited these traditions aren’t just preserved for special occasions or tourism, they are interwoven into the fabric of every day modern life. 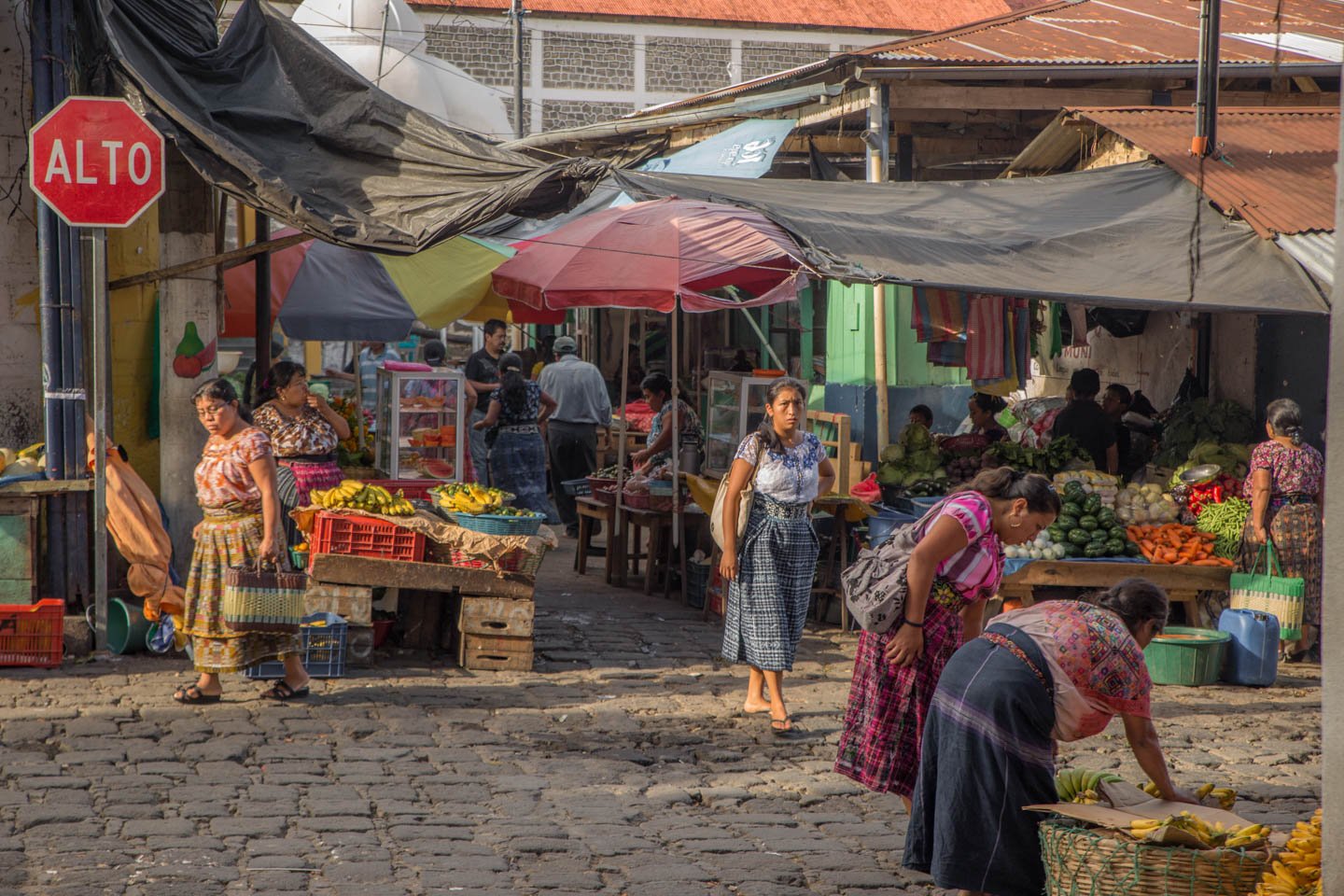 A typical day at the market, with stall holders and shoppers alike in traditional dress.

While many Guatemalans learn to speak or understand more than one Mayan language, Spanish is the shared national language. Spanish is spoken by much of the population as a second or third language.

There were some small apartments available to rent on site. We opted for the most lavish apartment which included a small oven, and private bathroom. Luxury! 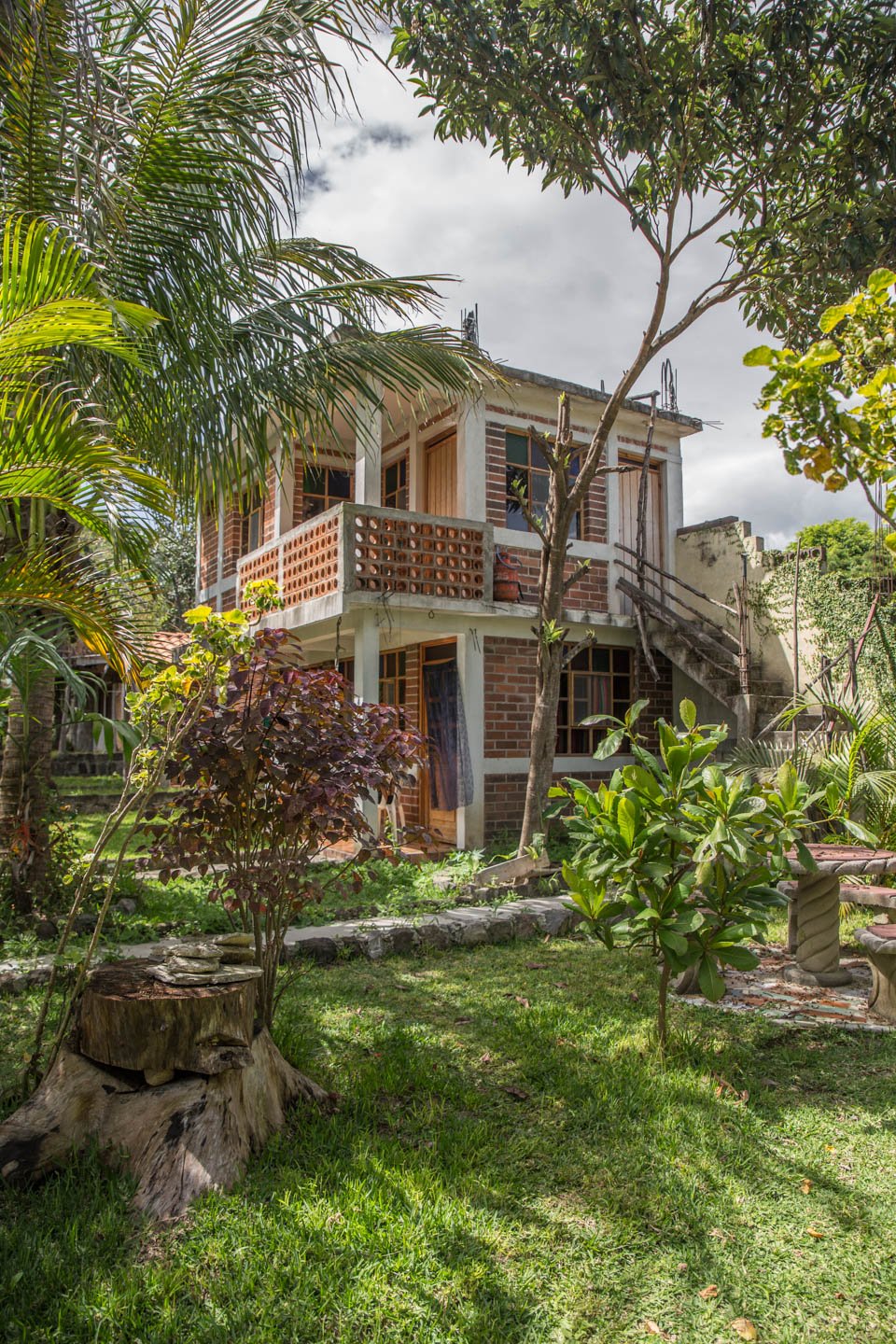 Ours was the penthouse suite.

Oh, it also included a cat. 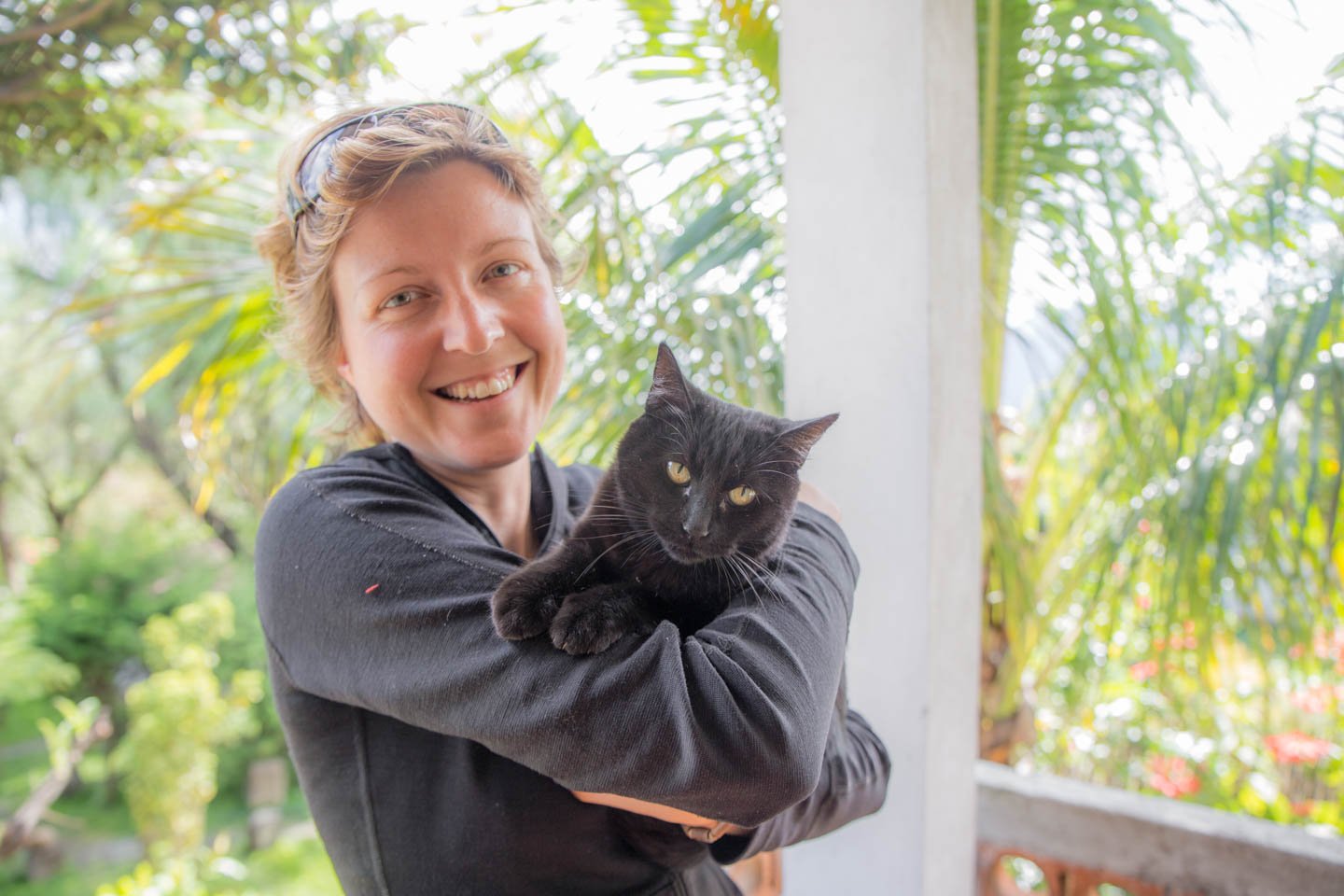 Apparently her name was M’ix (Rhymes with sheesh!) but for some reason ‘Cute-atron Unstoppable’ stuck. 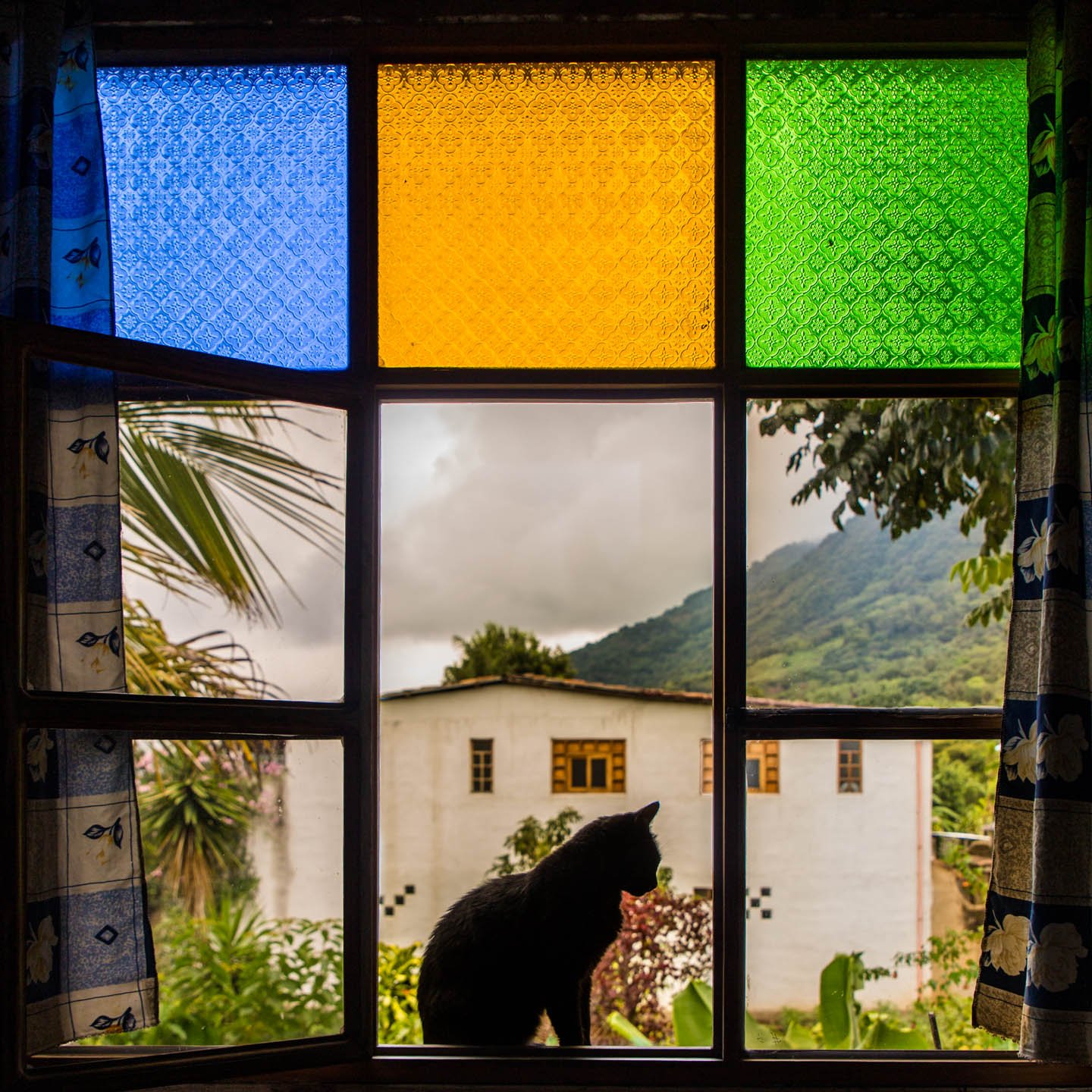 We opted to have separate, private classes so we could learn Spanish at our own pace. Also because it was going to be the only way for Ben to get a word in edgewise in a new language. 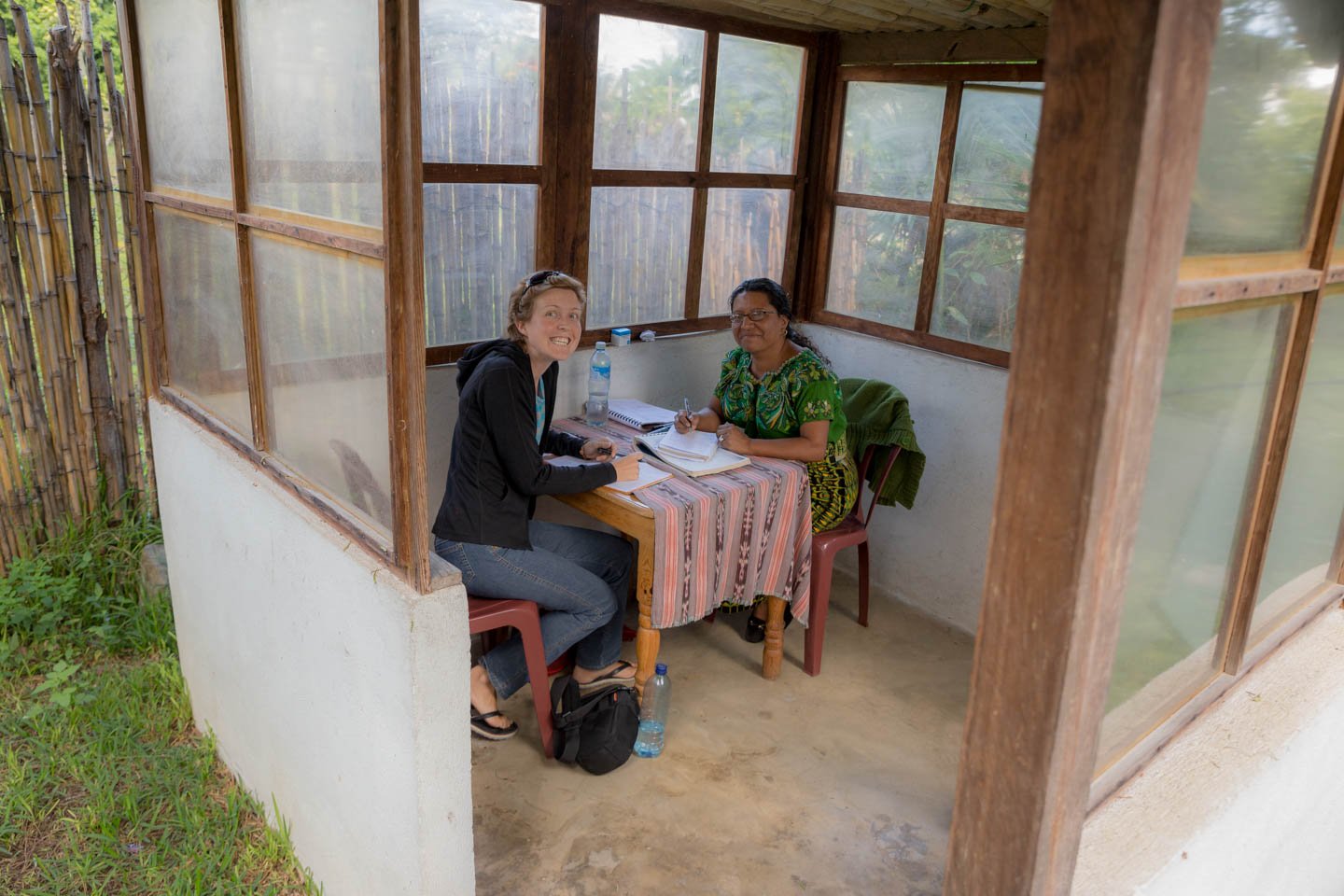 Emma being a big girly swot with her teacher Magda. 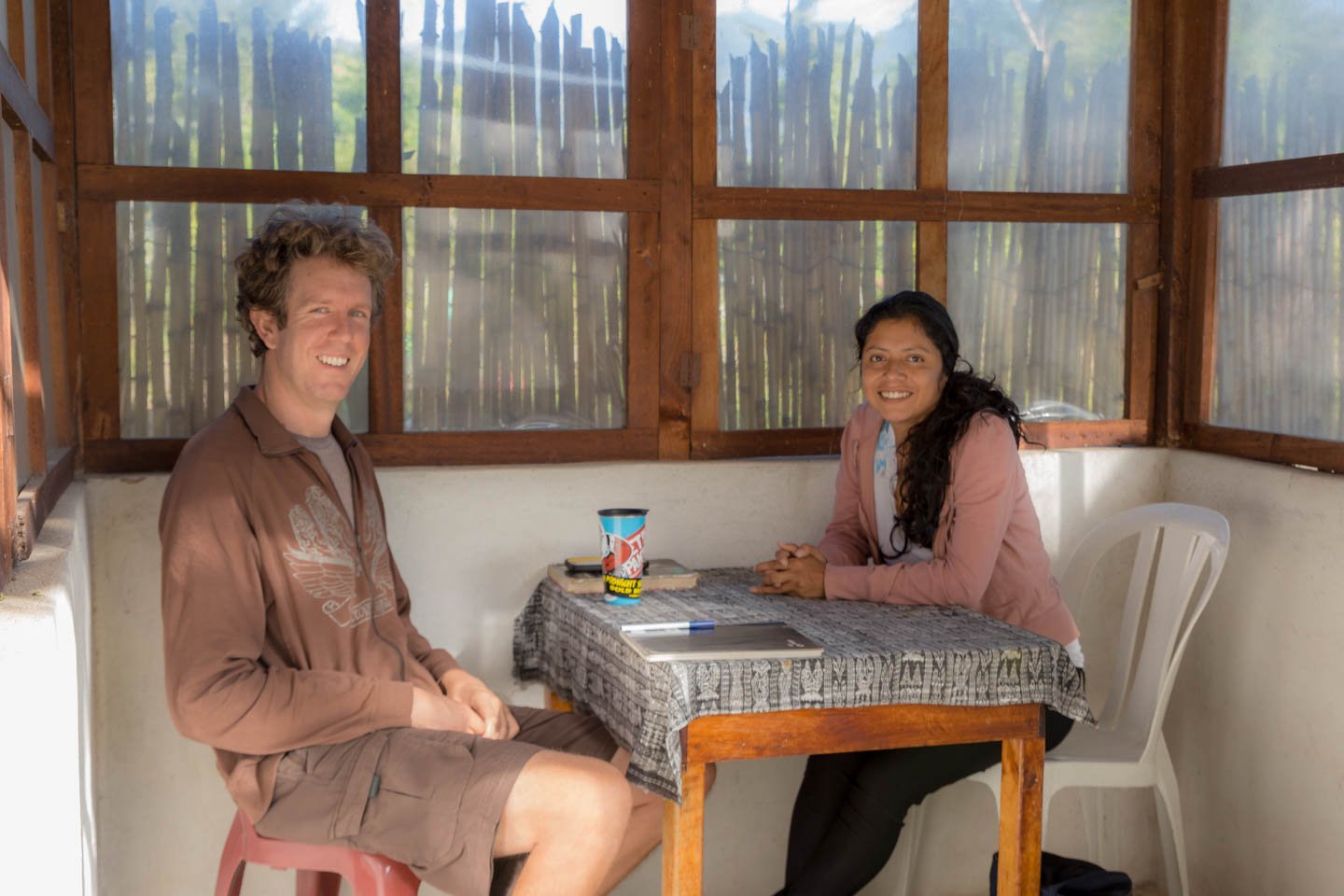 Ben and Vilma, who had the unenviable task of luring Ben into having a conversation.

Our classes were in small rooms just a short early-morning stumble from our front door. Which was good news, as the early starts were a bit of a shock to the system. 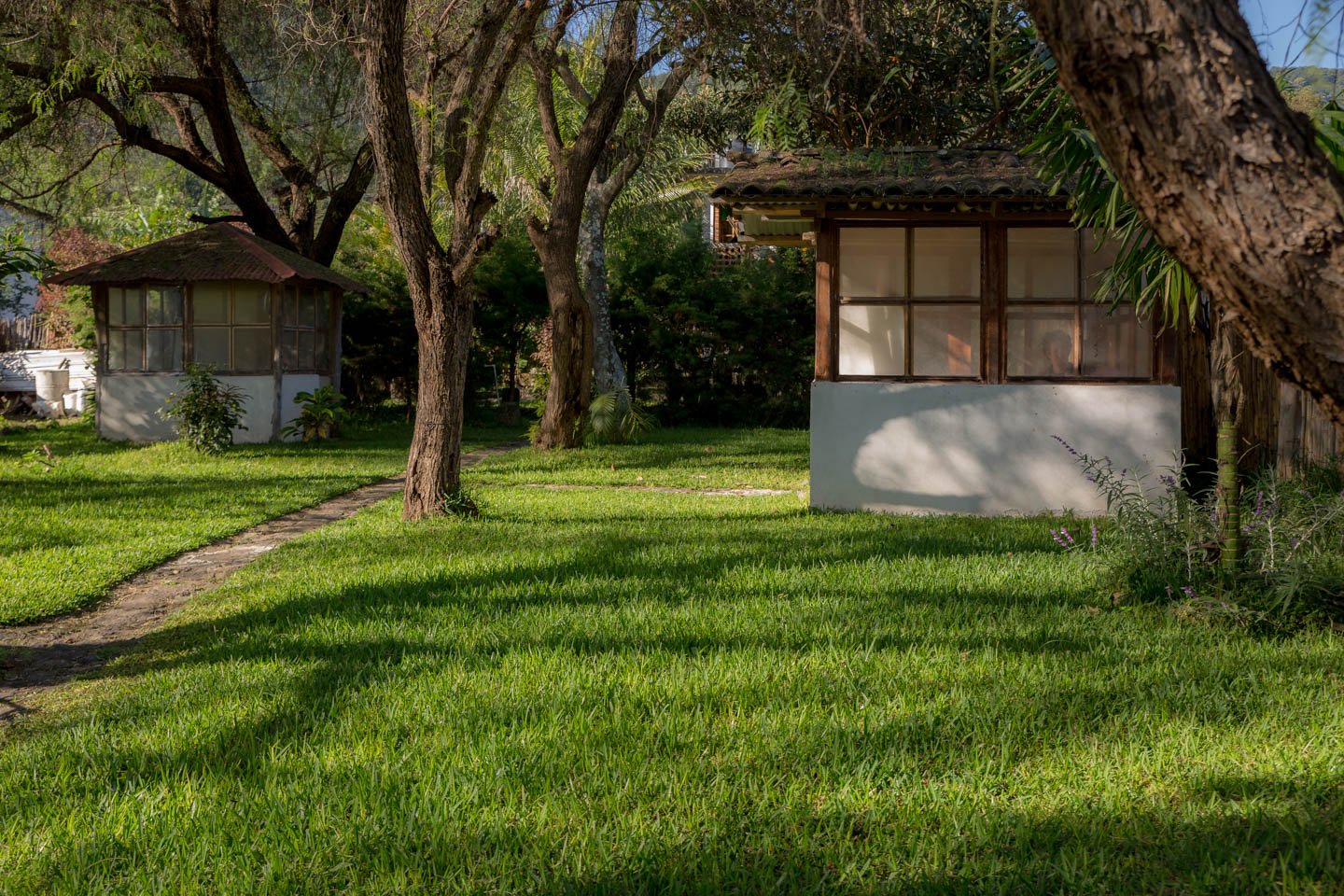 We soon learnt that the family who ran the convenience store across the road from the school offered home-cooked meals to students for a very reasonable price. Probably didn’t need the apartment with the kitchenette. 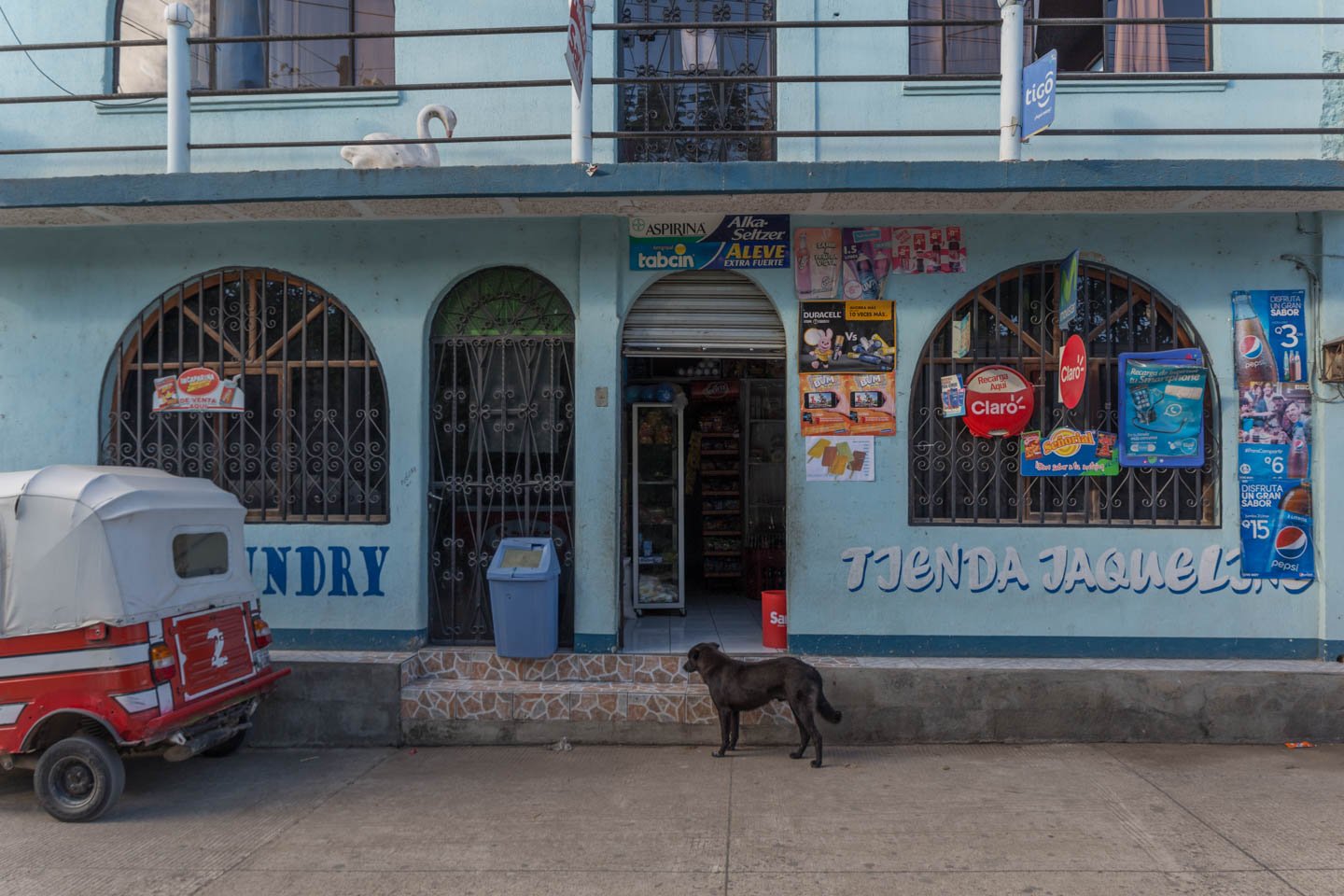 Who knew that so many tasty home cooked meals awaited within this humble store front! 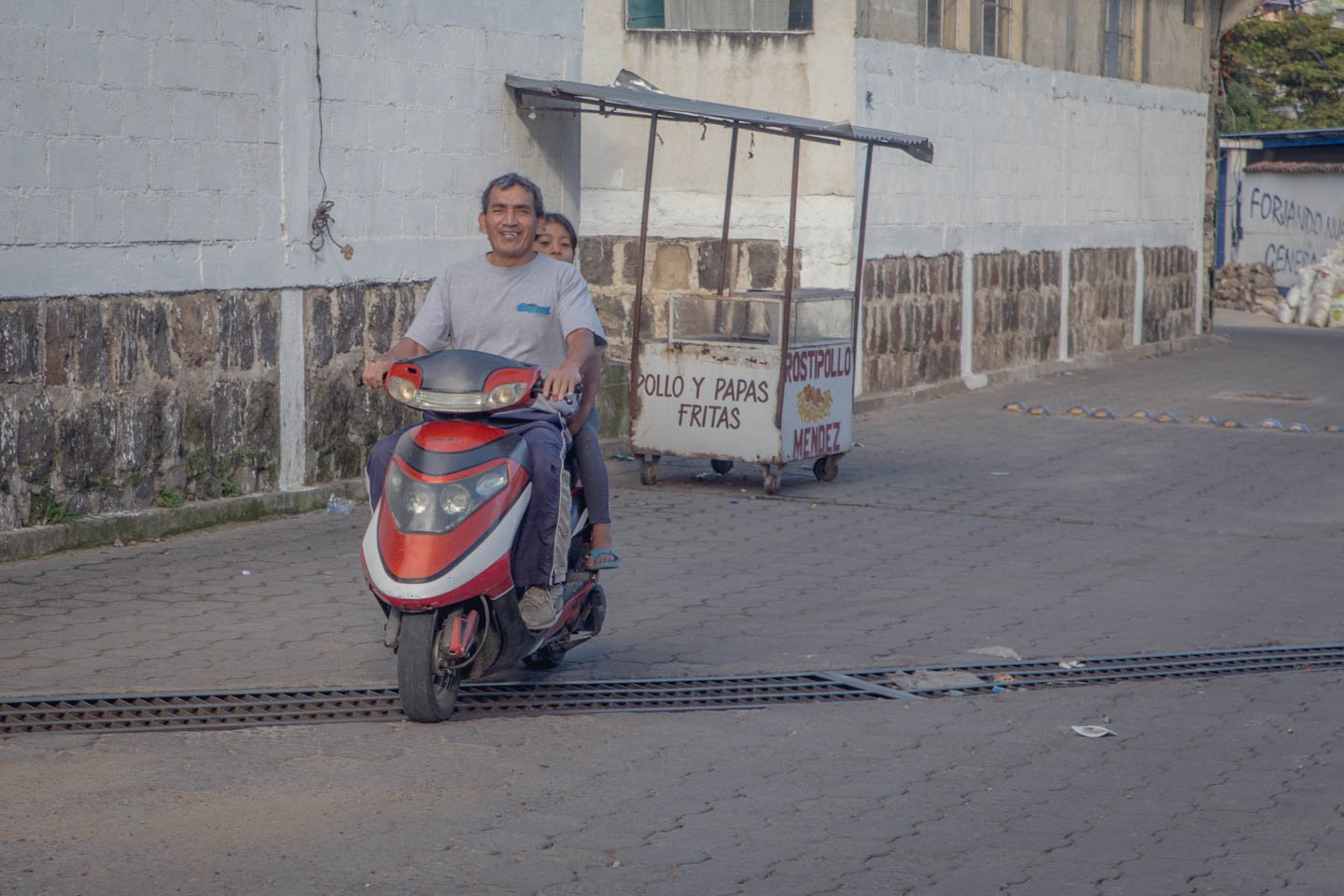 Half the family (Rafael and daughter, Maria) zipping back through town on the scooter. No doubt bringing with them the ingredients for delicious chocolate pancakes. Even now I want to drive back and eat some of these for breakfast.

It was settled. Monday to Friday home-cooked meals. Five hours a day of Spanish class. Four hours a day of client work. Plus as much practice as our rusty brains could handle. Sundays was Smokin’ Joe’s all you can eat barbecue. Saturday for exploring.

It was starting to sound an awful lot like… a routine.

After rather a long time of driving around with no real routine at all, we weren’t sure how we’d go with all this repetition. Would we be terribly bored after a week? Would we even be able to handle five hours of class without something short-circuiting in our brains?

We signed up for a couple of weeks to test it out.

It can’t have gone too badly. As this turned in to four weeks. Then eight.

I wouldn’t say we thrived on the routine, it was actually quite tiring to learn a new language for five hours a day, plus another few hours practice outside class, plus a few hours of client work. Especially in our pitiful state, weakened by months of freedom. Unprepared for alarm clocks, schedules and deadlines.

At least we had a friendly cat to keep us company when afternoon naps accidentally happened. 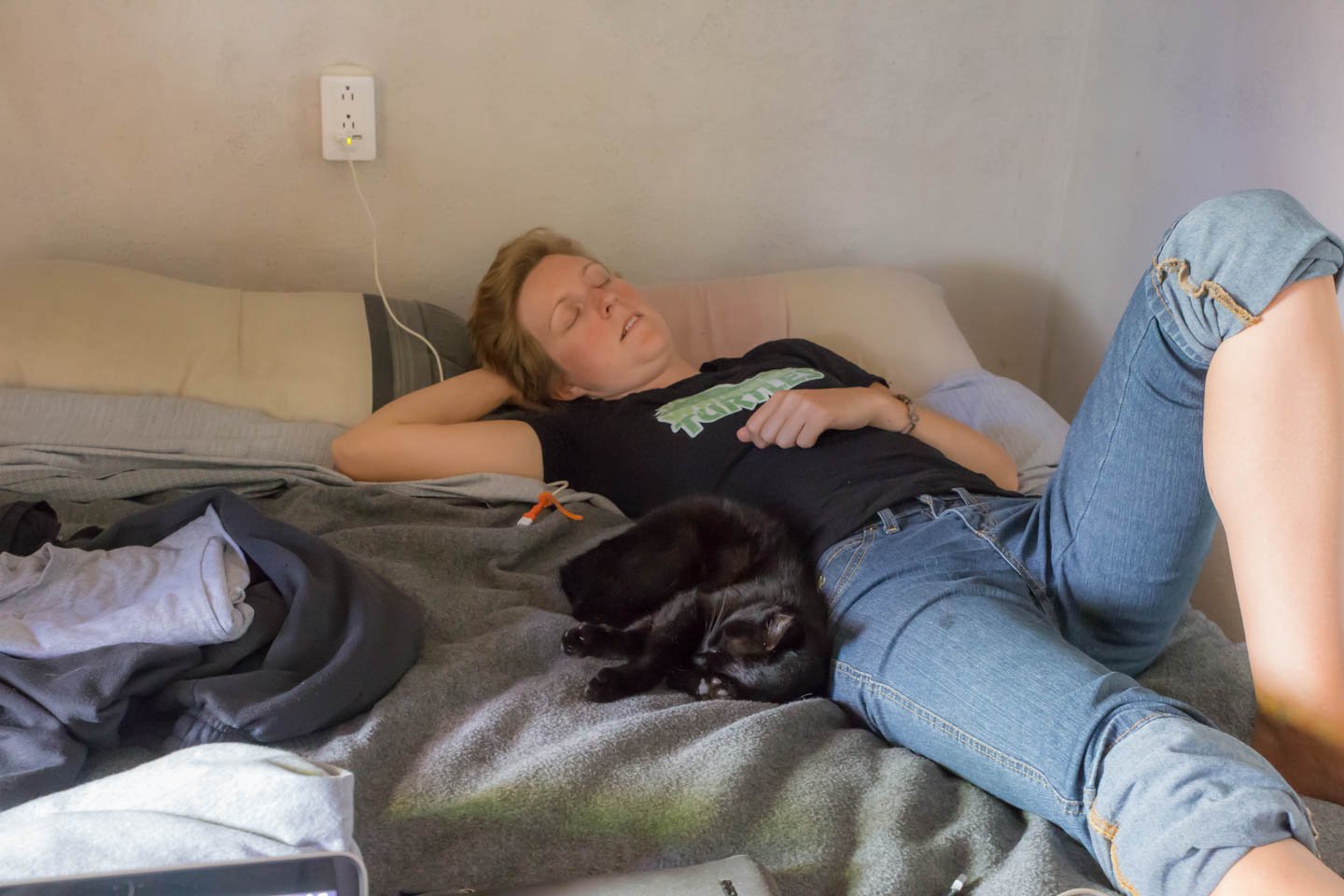 For Emma, these naps happened a lot. 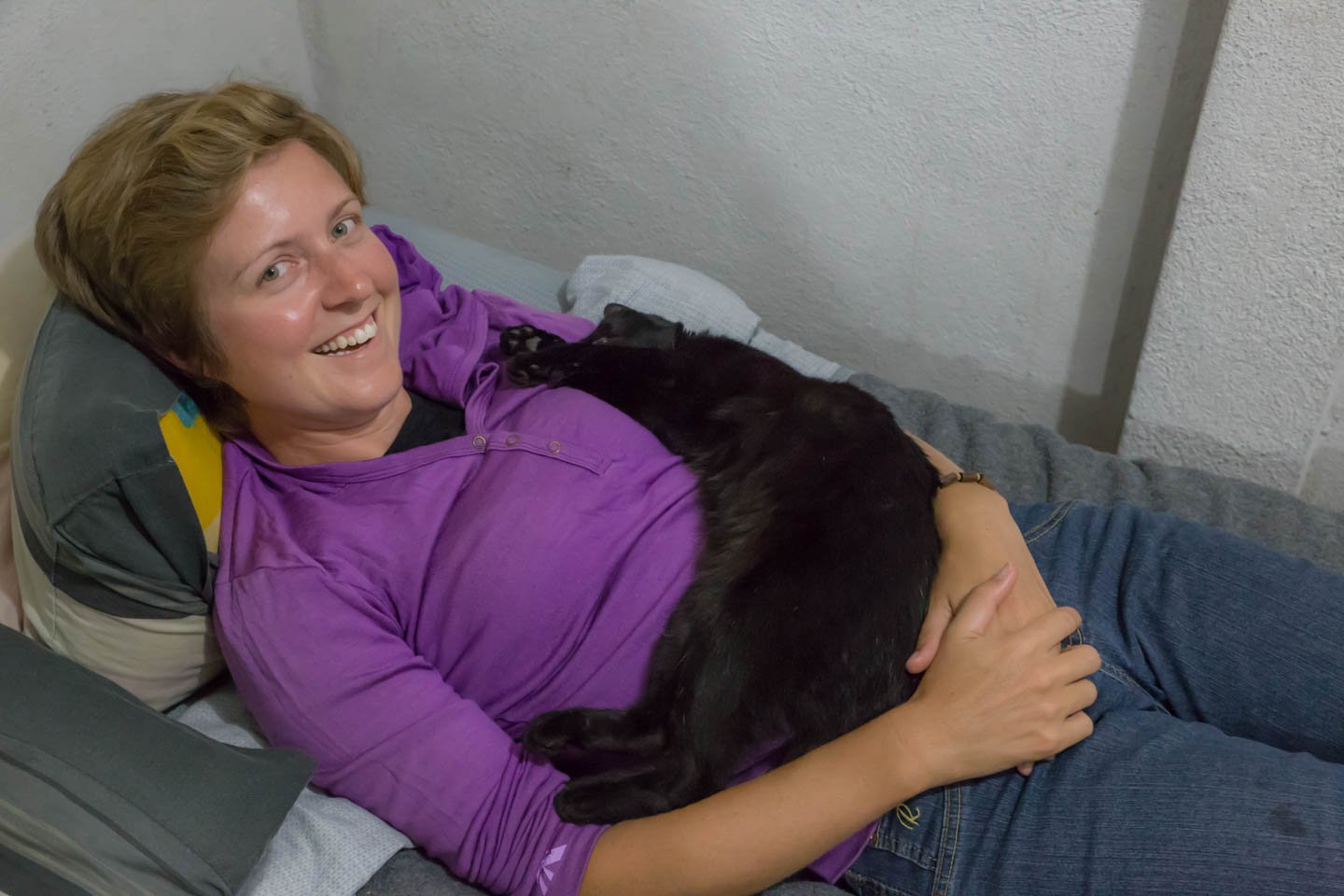 They happened even more often for Cute-atron Unstoppable. 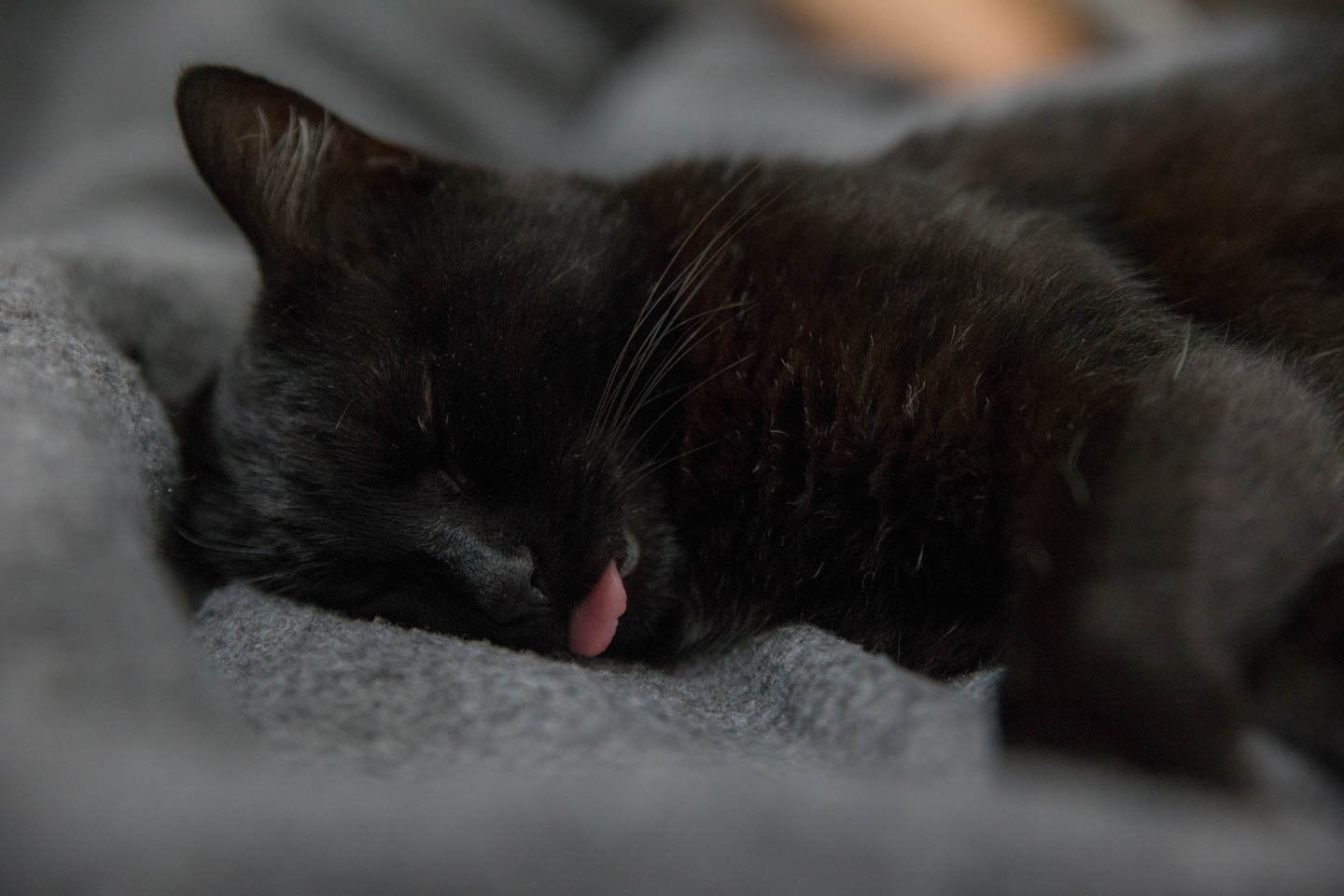 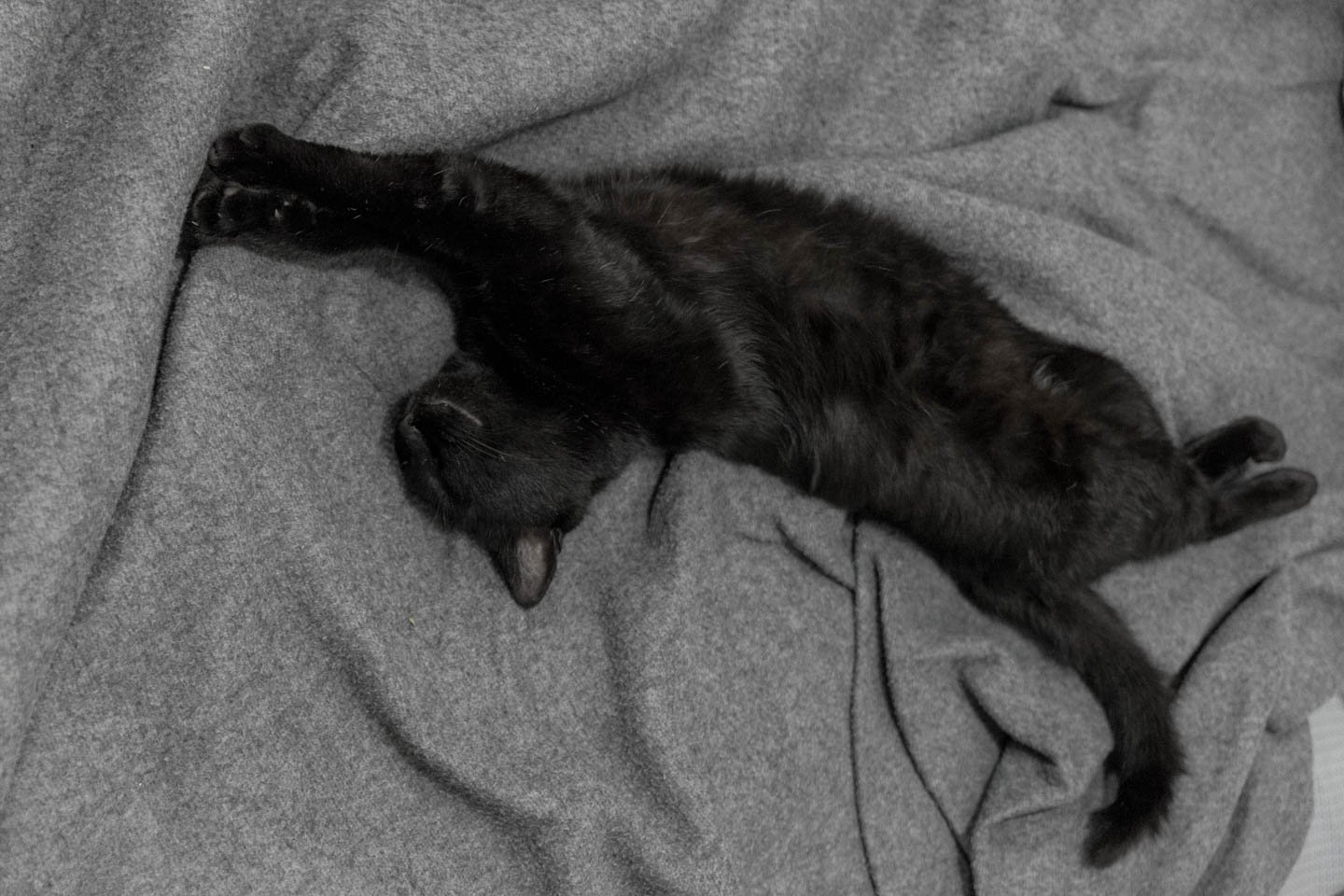 “Now what you’re going to want to do, is move away from that wall” 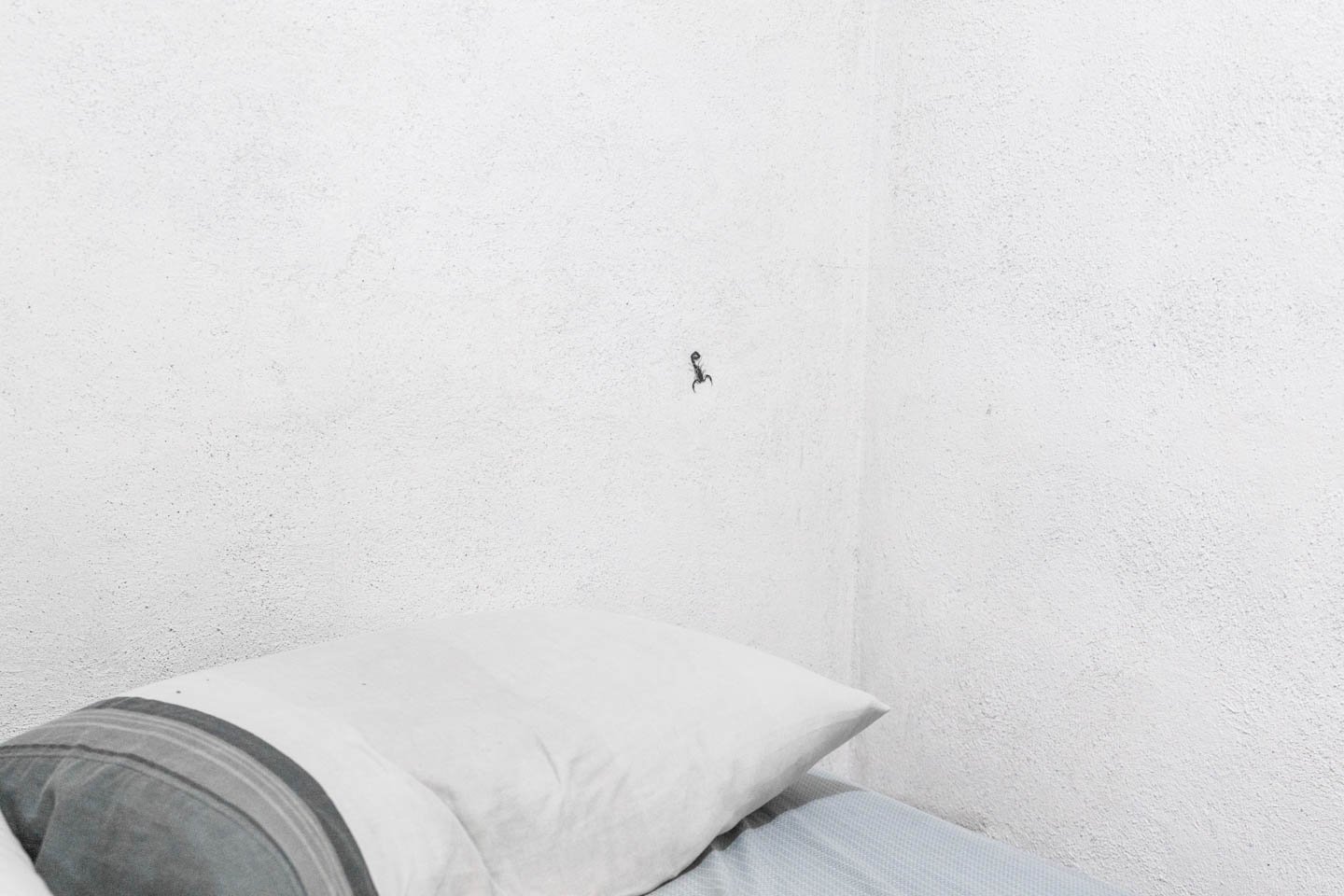 Is that a scorpion? 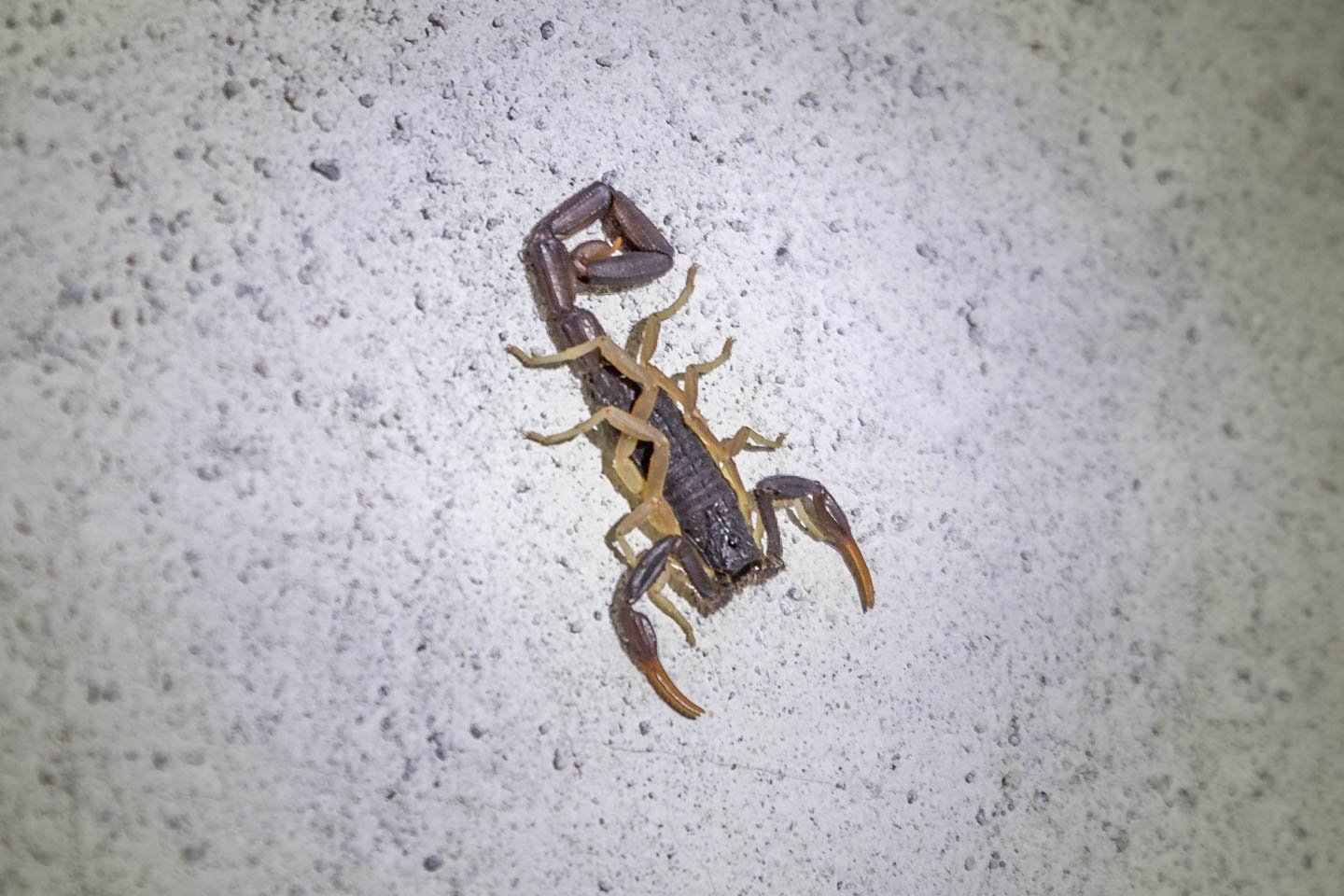 For the most part, the routine became familiar.

The same roof dogs barked from above. 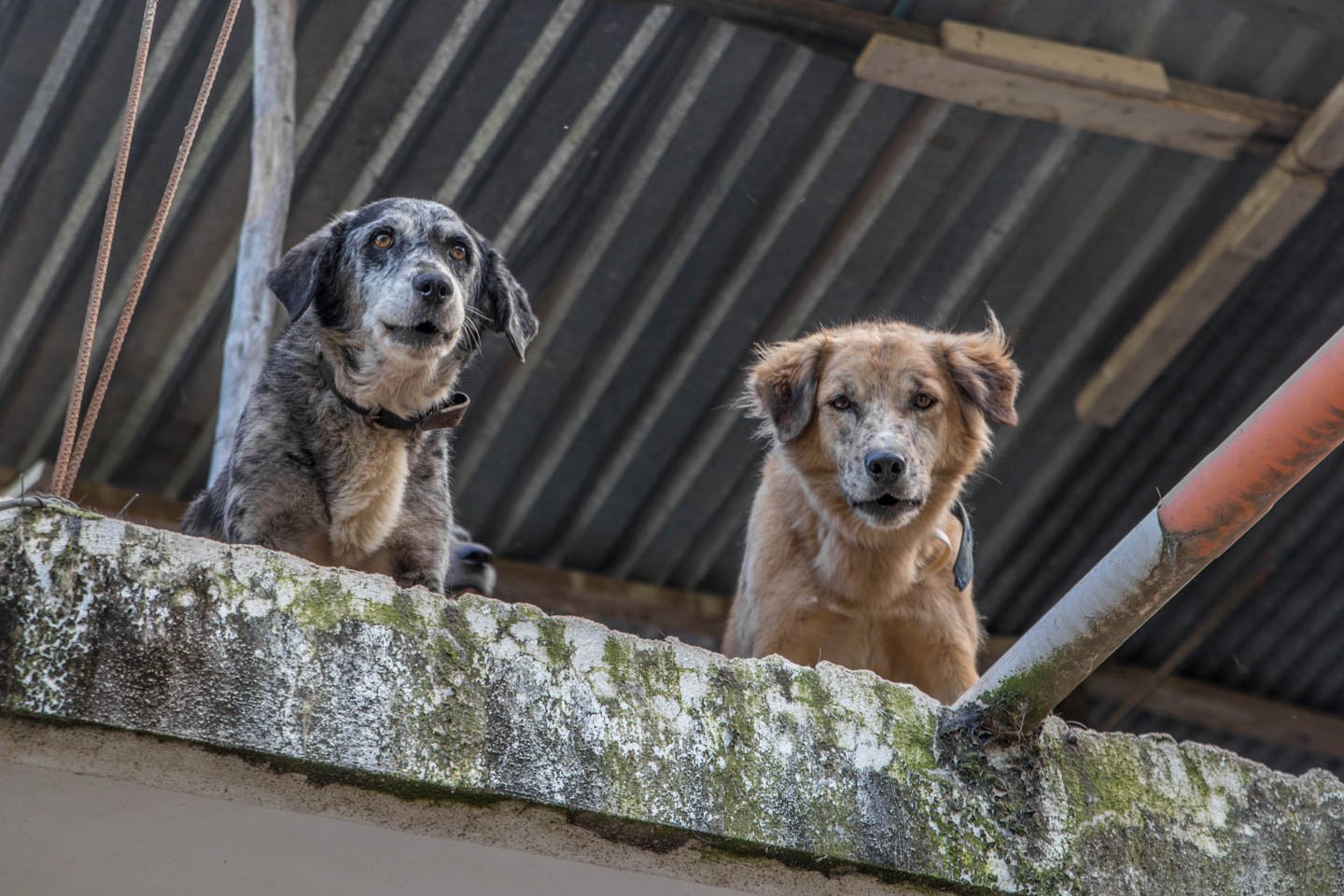 We ate many of our meals with the same family.

Except in the weekends when we wanted decent wi-fi, then we’d have breakfast at the same cafe. 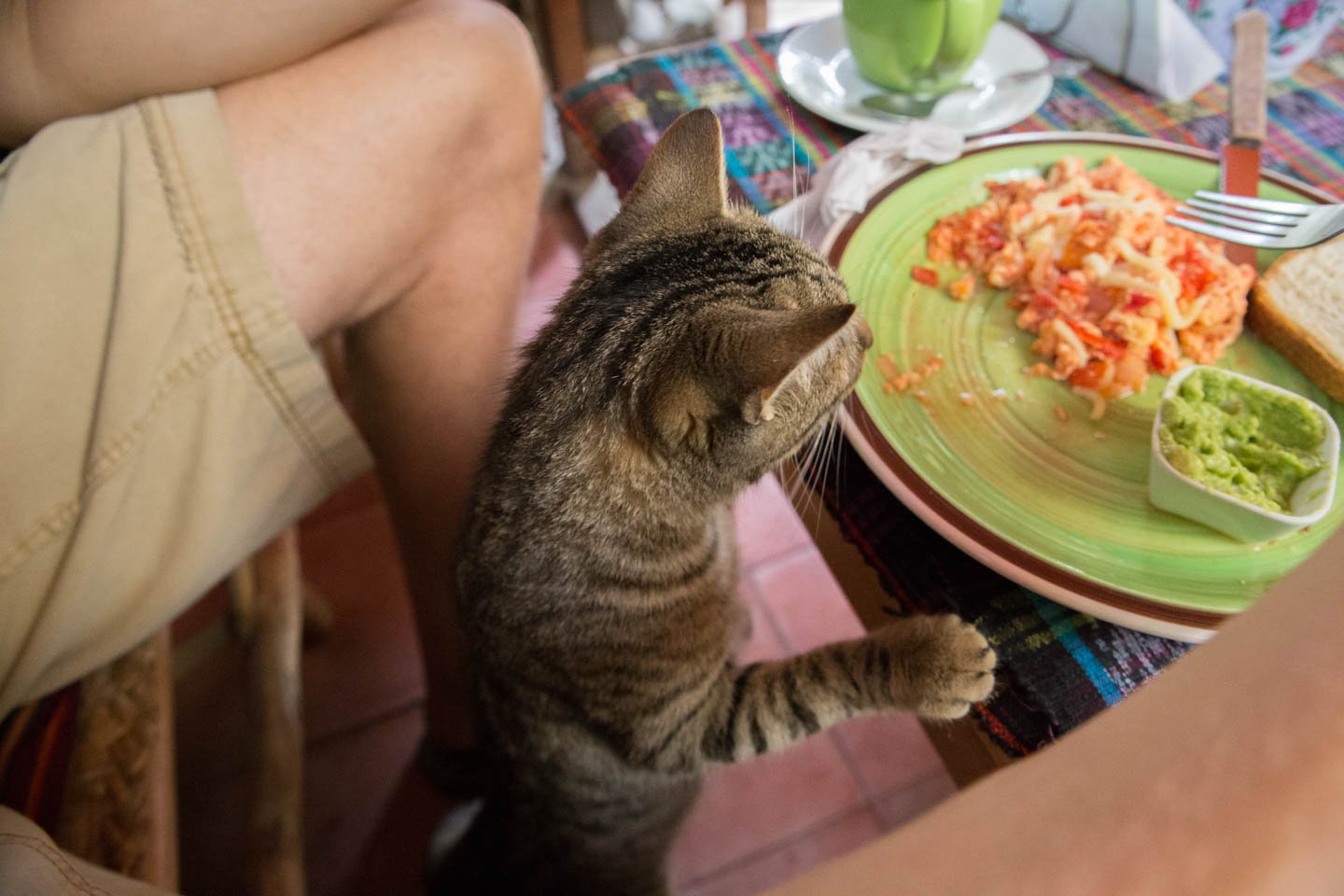 It was a mixture of the friendly cat, fast wi-fi and delicious food that kept bringing us back to the same spot.

Or we’d head to the market to buy our own ingredients. 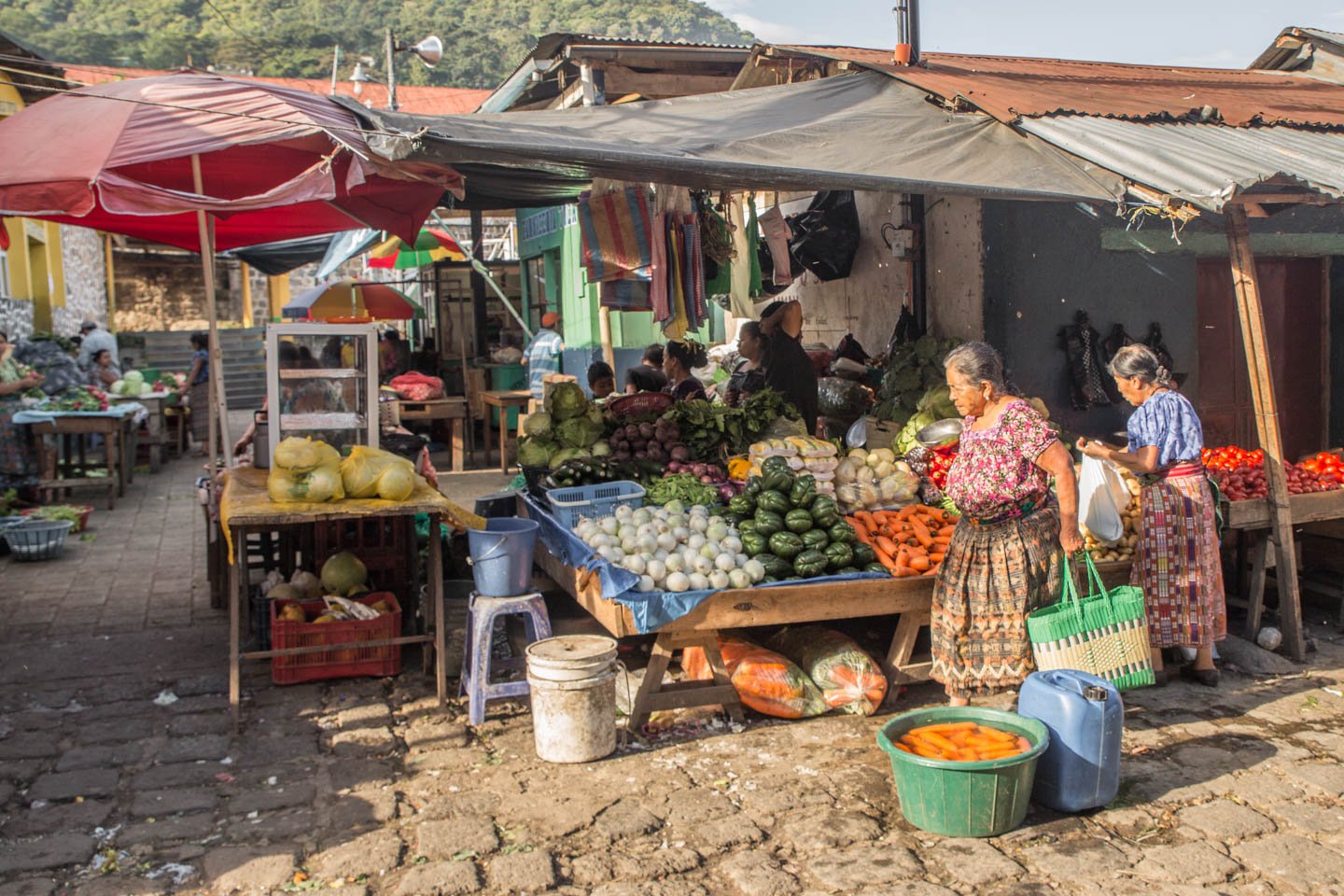 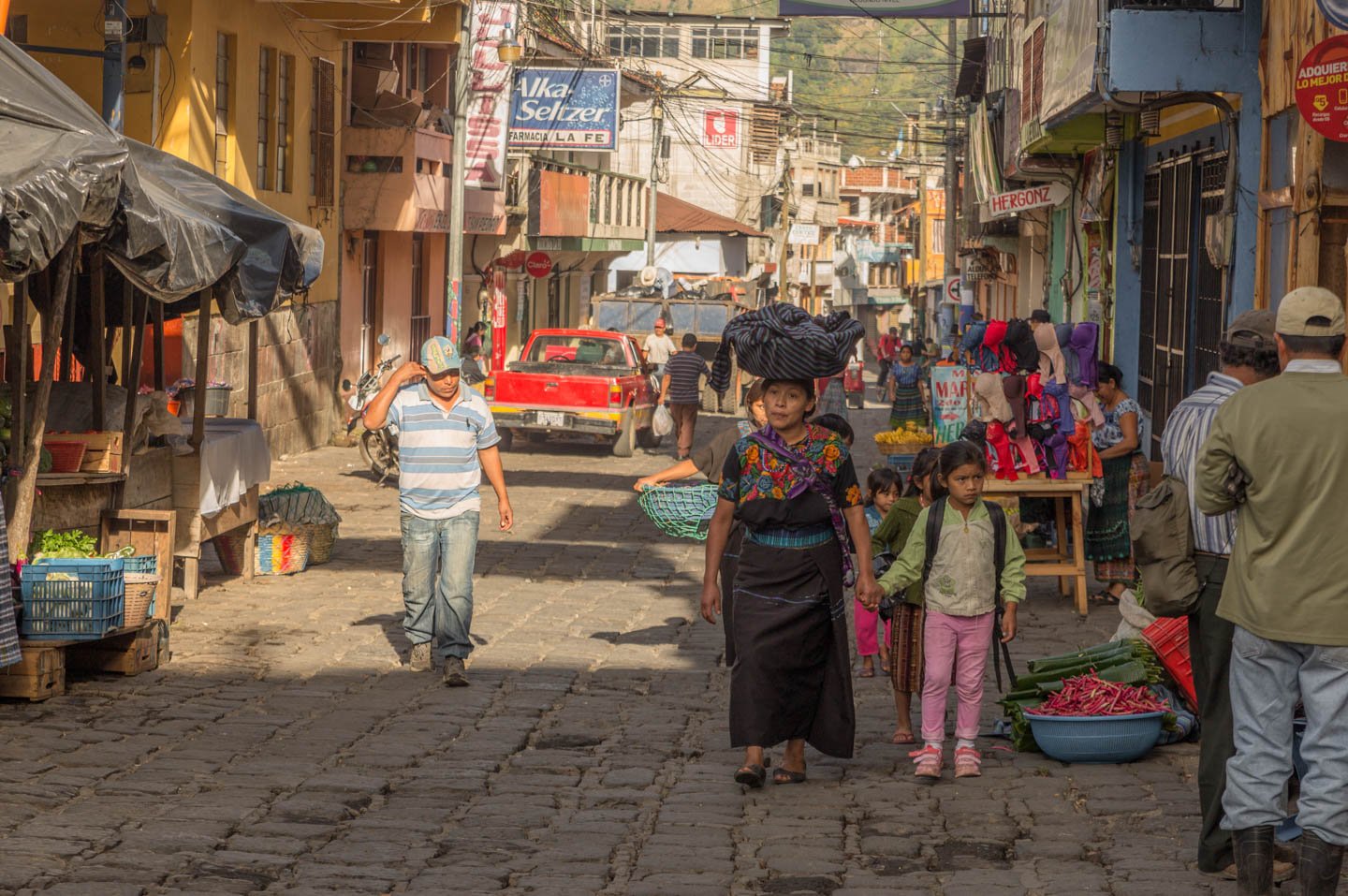 Or perhaps one of the other local restaurants.

This one offered a platter with 27 different types of cheese. Don’t mind if I do… 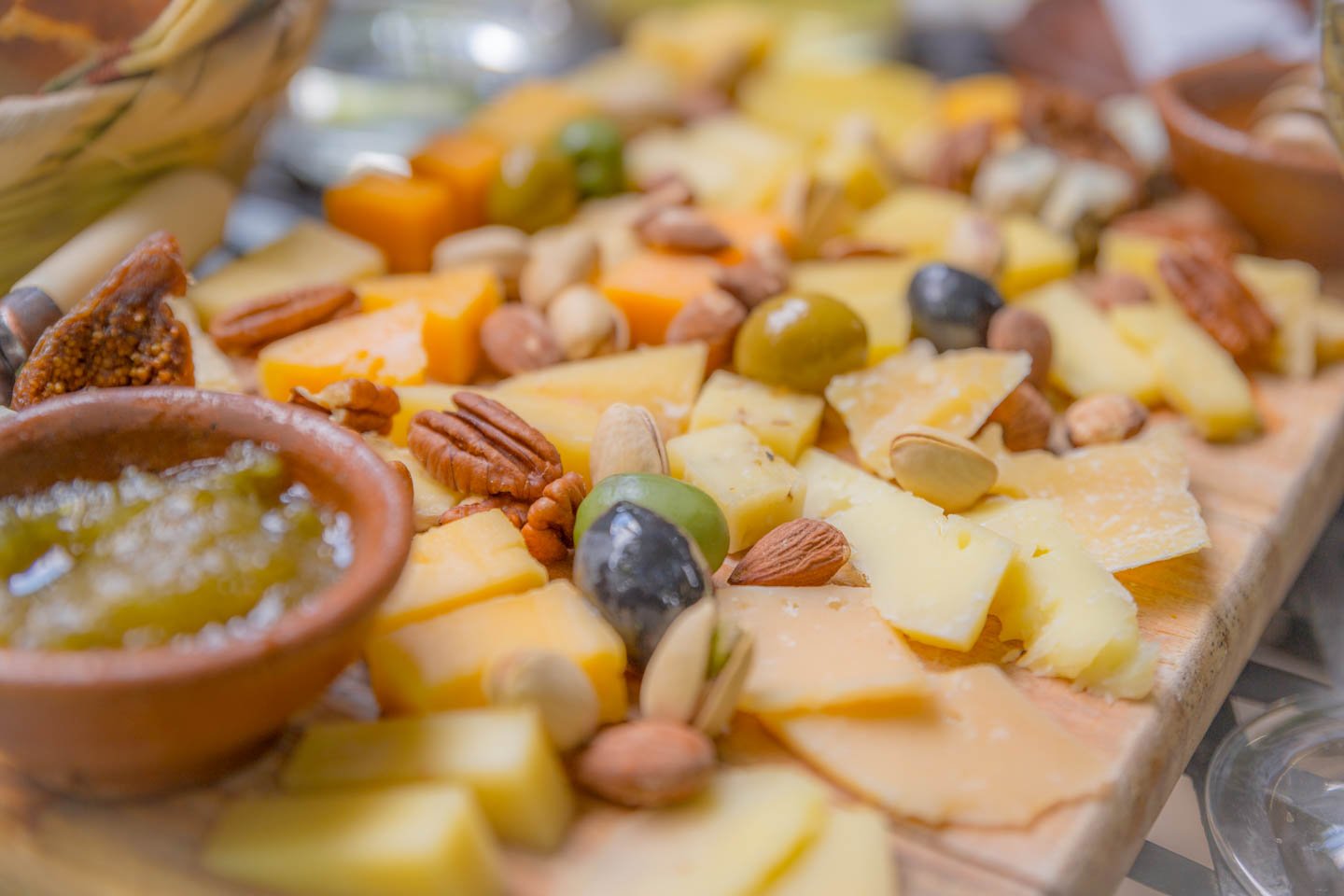 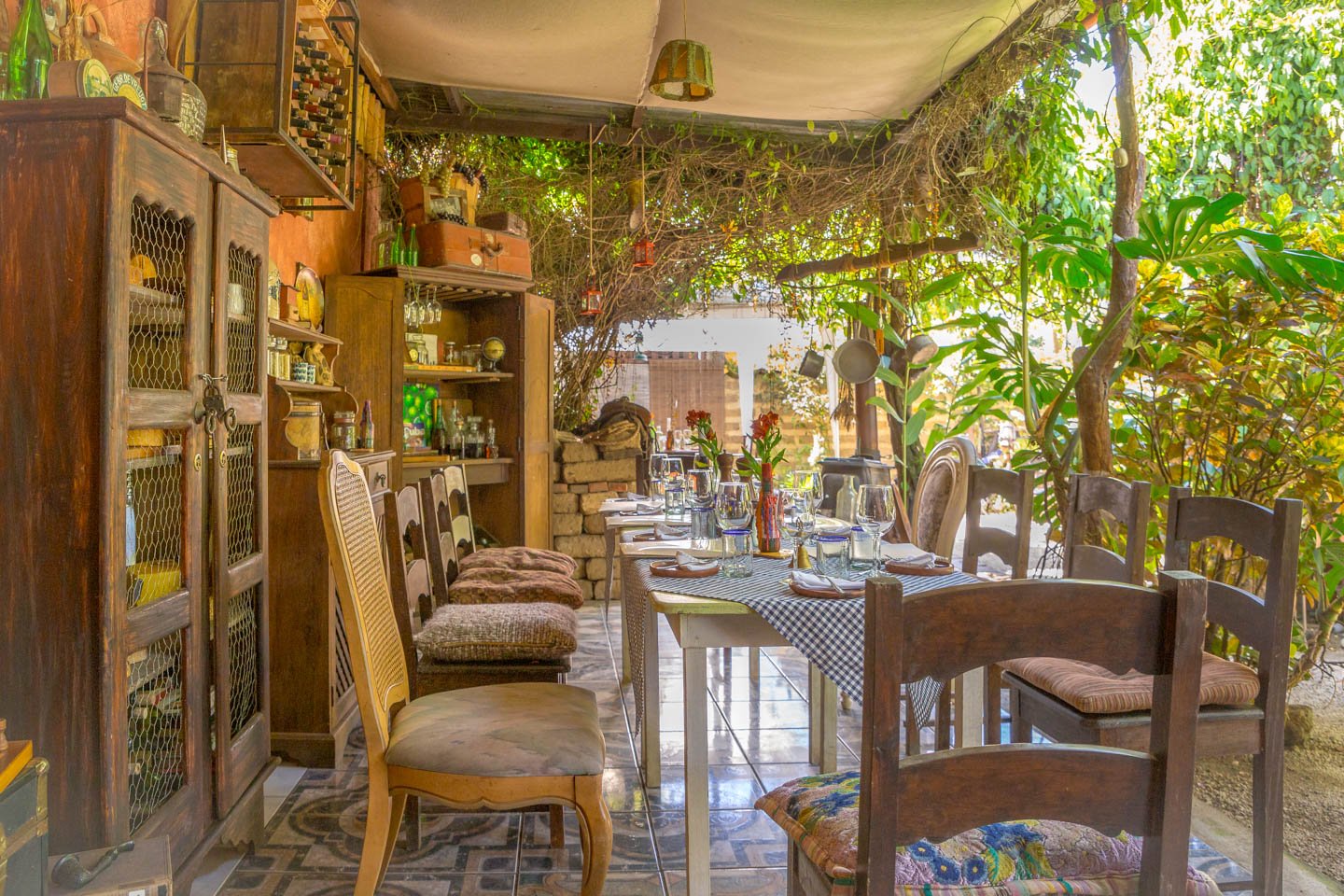 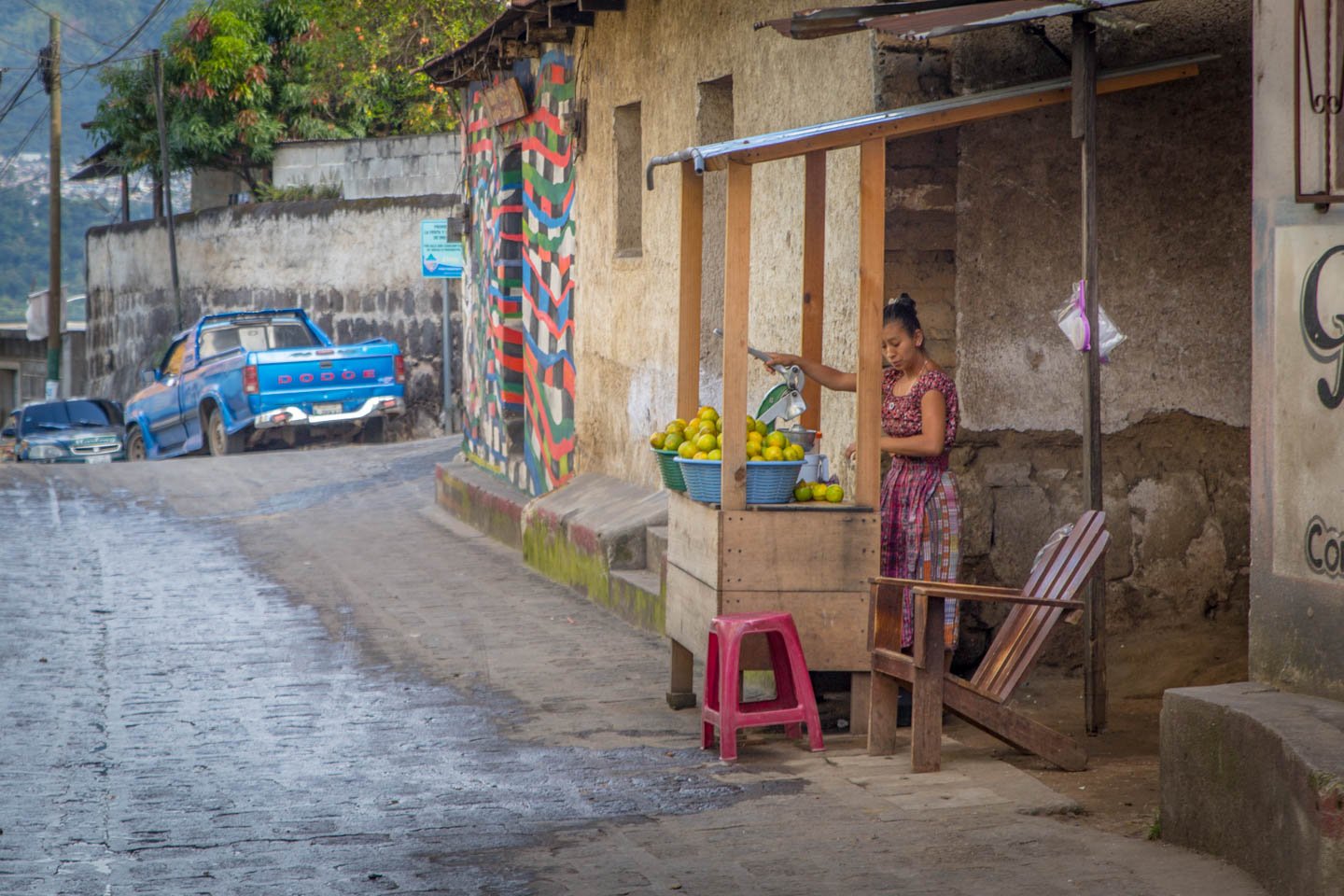 We’d wander around the same streets.

The same cat would be waiting for us when we got back. 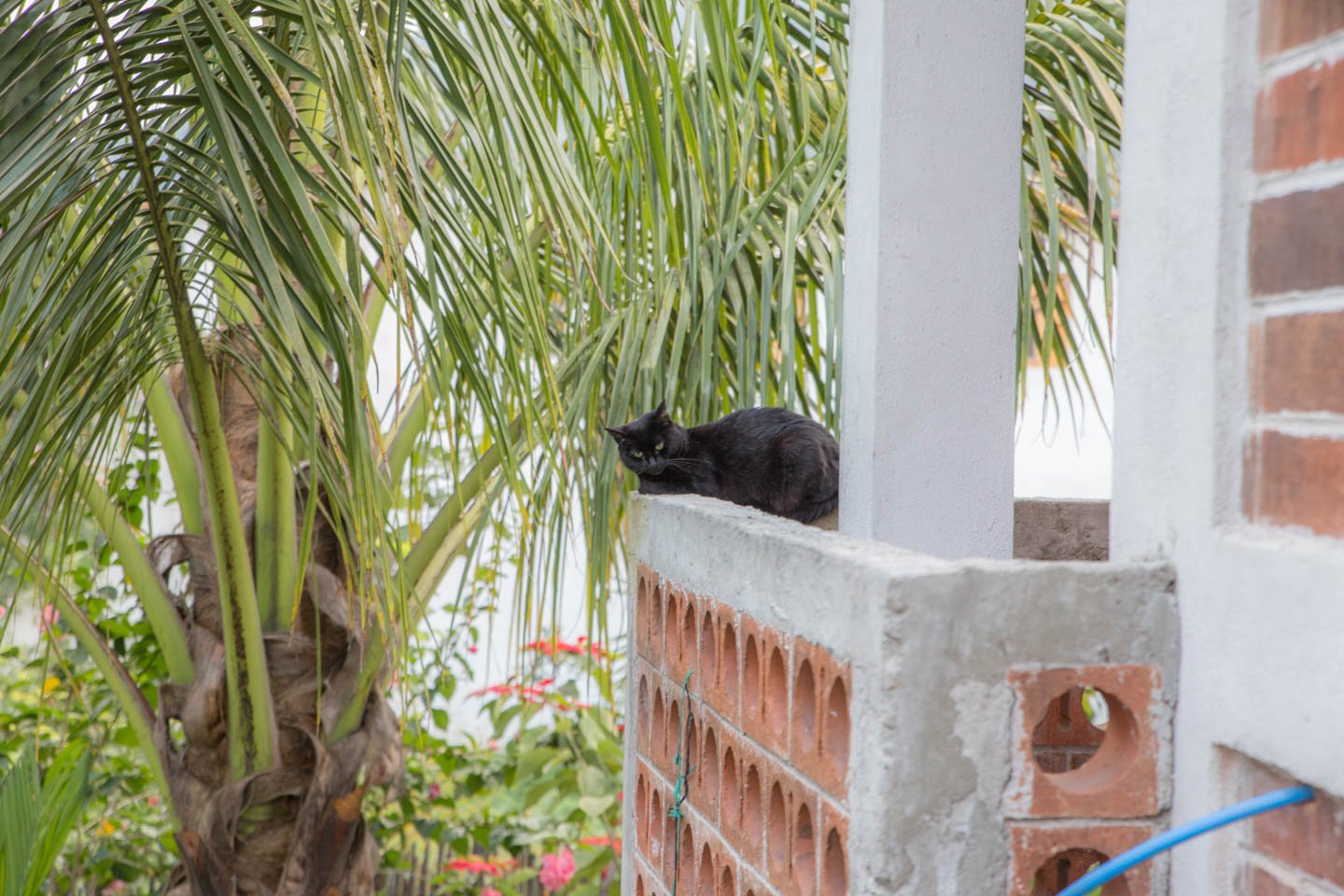 Once a week all the teacher’s and students would work together to prepare a meal.

We’d finish the week with some hard-earned beers. 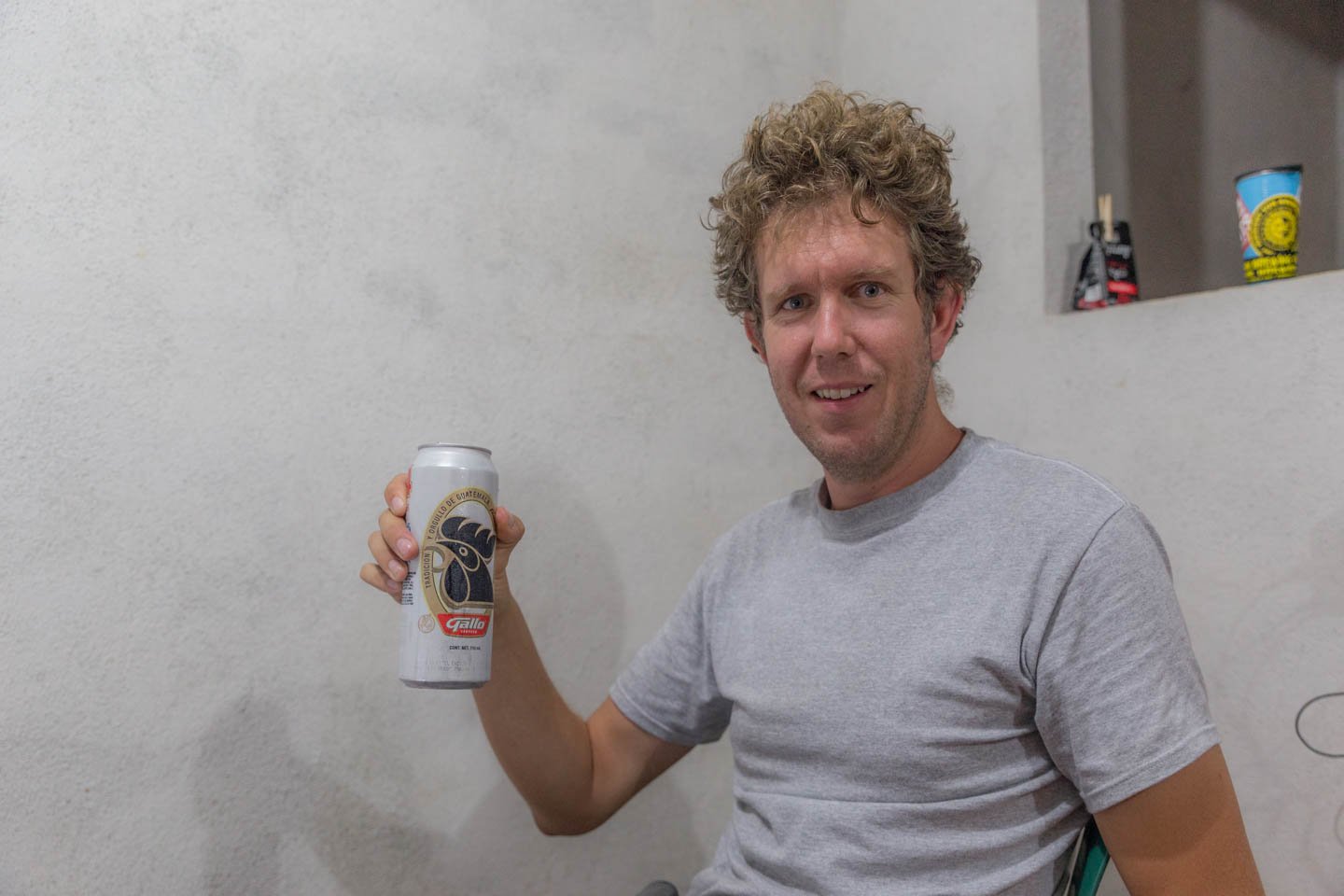 apartmentatitláncatdogGuatemalalake atitlánroutineschoolscorpionSpanish
« To the lake
The mythology and magic of Atitlán »