Huiñay Huayna and why water and cameras don’t mix 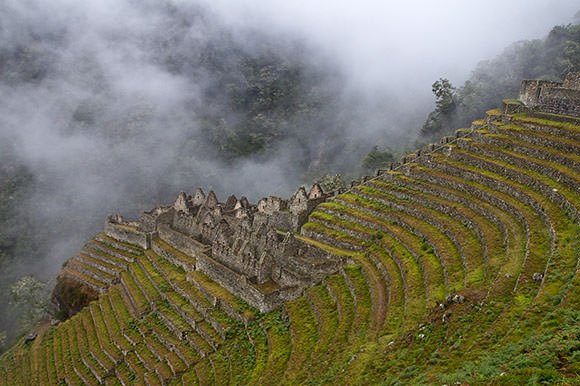 This place has made it back for a second ‘Photo Friday’.

Huiñay Huayna was the place where my camera finally succumbed to three days of rain, followed by the entire contents of a drink bottle of water, all seeping through the camera’s sensitive electronic innards—all this the afternoon before we arrived at Machu Picchu.

After imagining that I was going to have to sketch badly drawn ‘Machu Picchu selfies’ on the unused pages in my passport with a borrowed pen, I was more than pleasantly surprised when my little camera dried out enough to start working again a few hours later. It took a year or two for the flash to finally start working again—the flash can still be a little temperamental, as we found out exploring an abandoned military cave in Vietnam (that’s a story for another day) but otherwise my trusty wee Canon survived the ordeal well.

Despite suffering such trauma my trusty (now perhaps more than a little rusty) camera did record some great shots of the stunning ruins at Huiñay Huayna.

This place had such an amazing peaceful atmosphere. We were lucky to be there as the last of the mist and rain clouds finally swept away to reveal the vast terraced ruins nestled high into a mountainside amongst the Andean cloud forest. Later that night the sky cleared for us and we had the opportunity to sit alone in these ancient ruins and gaze upward at the multitude of stars that make up the Milky Way.