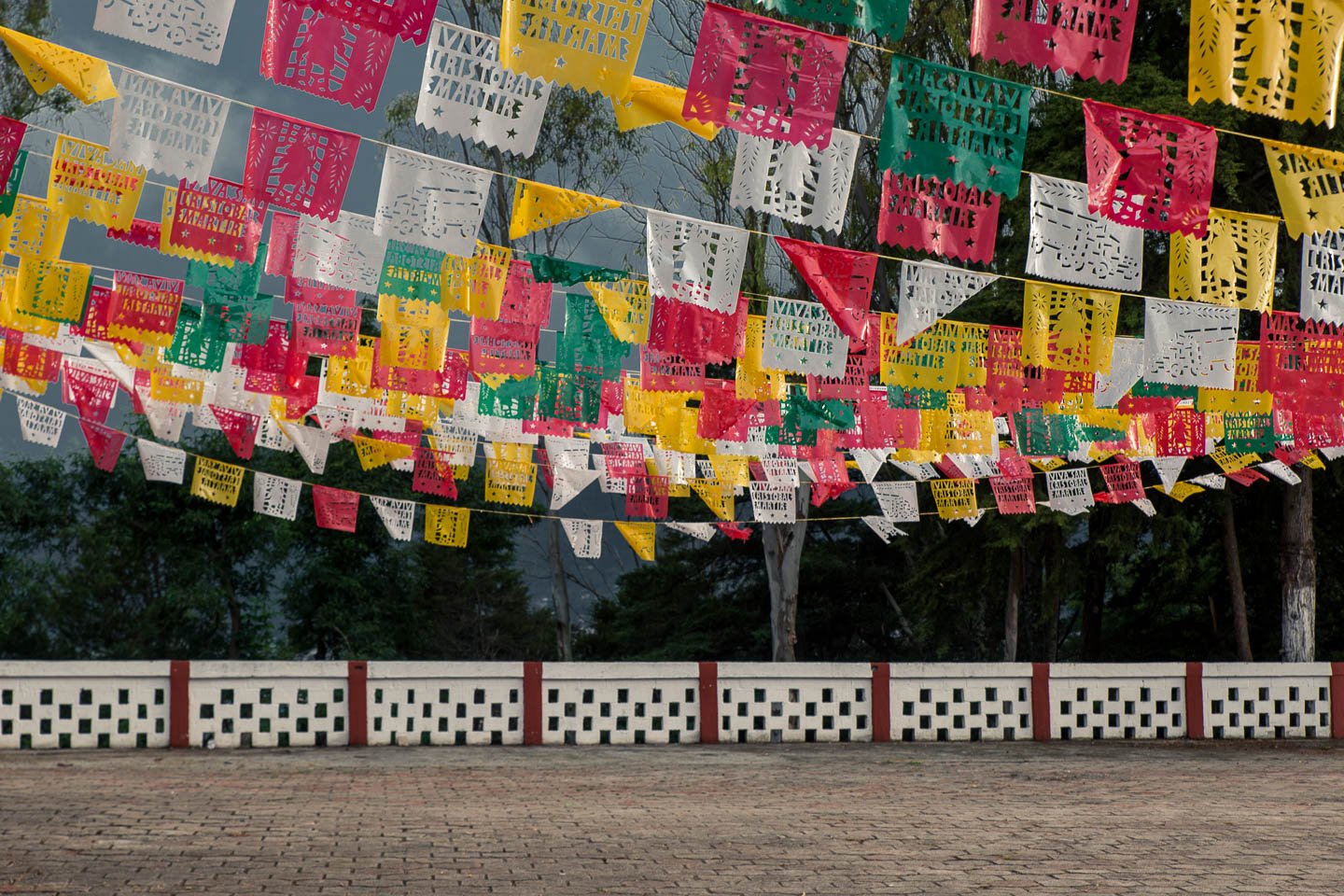 Overland travel is all about staying in the roughest, most unforgiving environments. Ignoring personal comfort. Shunning the trappings of a tourism. Seeking out discomfort and… no! Wait! Screw it. Today it is all about luxury.

We had spent a less than ideal night at the local RV park. But we still wanted to spend some time in the area. We made several unconvincing excuses to justify a stay in a nice hotel. Muttering things like “won’t get locked out” “working wi-fi” “out of the rain” “closer to town” we made our way in to town to seek out a hotel with space to park. This immediately eliminated a few of the more budget places we had considered. (Oh what a pity…)

It was in this manner that we found ourselves at the front desk of a rather posh looking boutique hotel, pleasantly surprised to find out that their rooms were practically half price for the off-season—breakfast included. No justification necessary. At just under $30 a night, we could absolutely afford to treat ourselves for a night… maybe more! 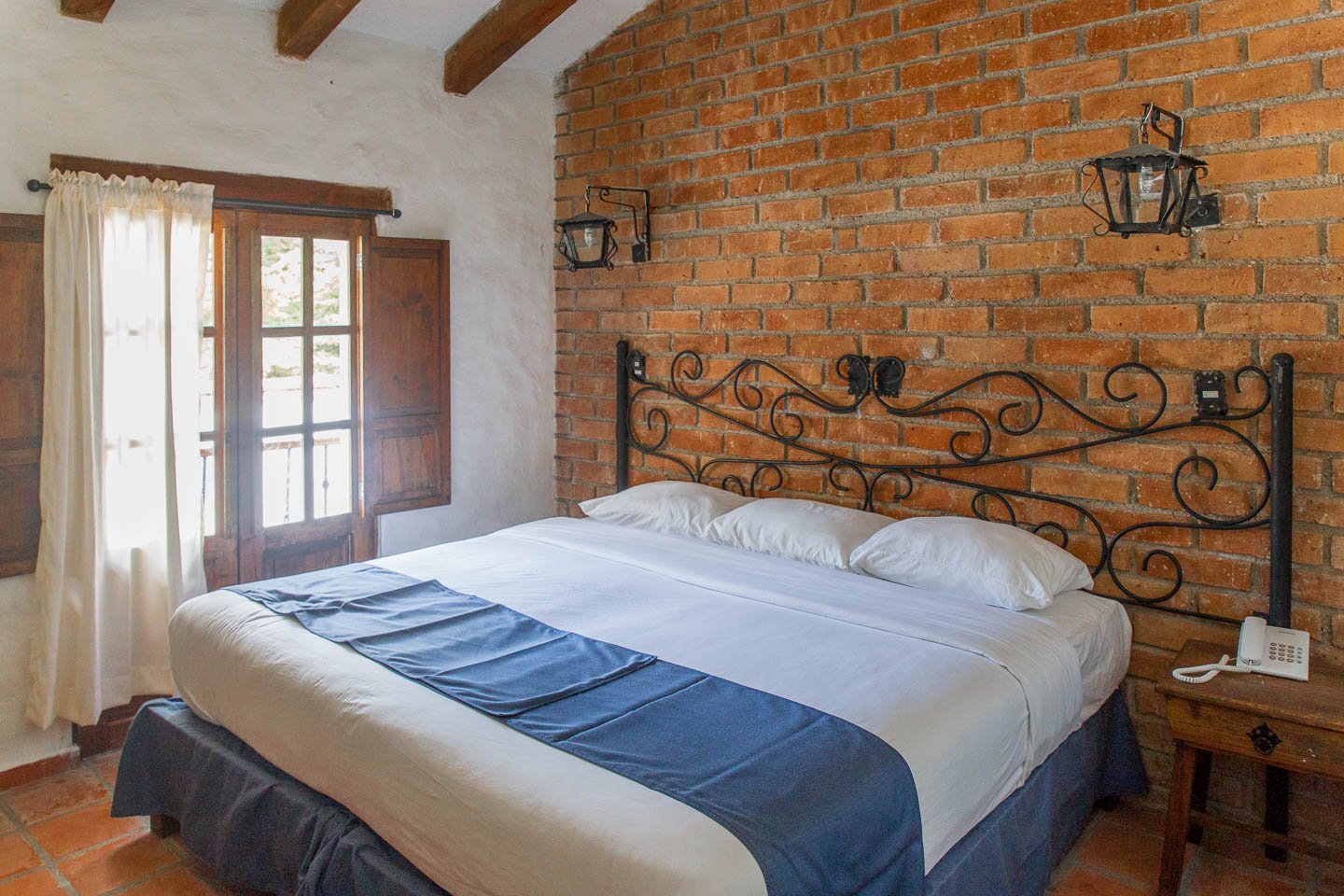 Ok. This is way fancier than the rooftop tent. When there’s space for a third pillow, you know it’s posh.

Emma squealed and danced with delight when she saw all the teeny-tiny soaps and shampoos in the bathroom. Definitely two nights. Yep.

Sure, these colonial buildings aren’t all designed with someone of Ben’s height in mind: 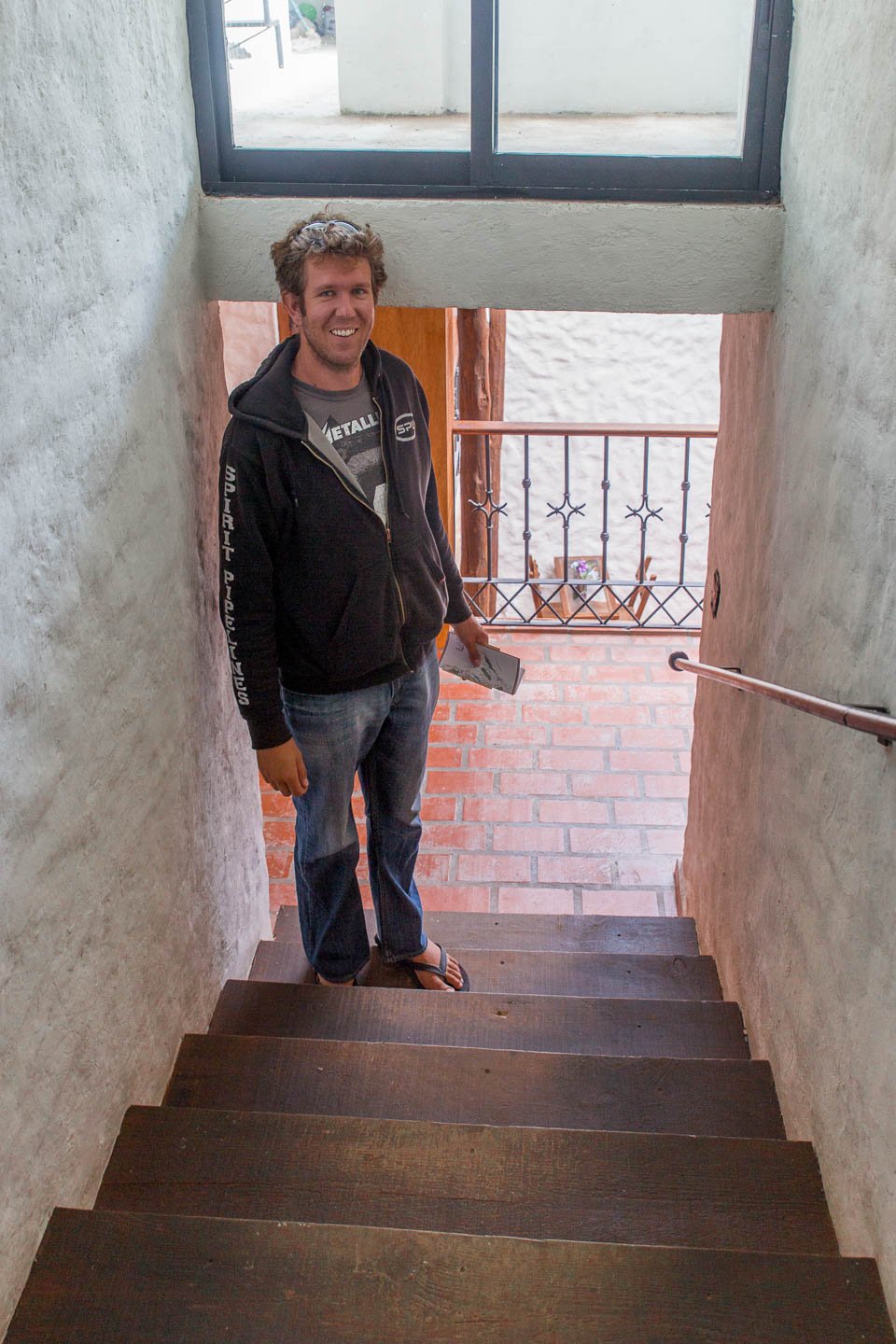 See. I told you being short is a good life choice.

But he can duck, when he remembers. (Spoiler, he didn’t remember enough and lost a number of precious brain cells during our time in San Cristóbal.)

We decided that we were going to make the most of our time in this popular gringo tourist hot spot. We were staying in a nice hotel, now we needed to seek out all of life’s necessities. Craft beer and good coffee. While we were there we planned to jam all the gringo food we could eat into our faces as well. Maybe if there was some time we’d check out some tourist attractions. But first up, beer and coffee.

It just so happened that just across town there was a craft beer bar out the back of a hipster coffee shop. A tasty lunch spot by day and craft beer and burger bar by night. 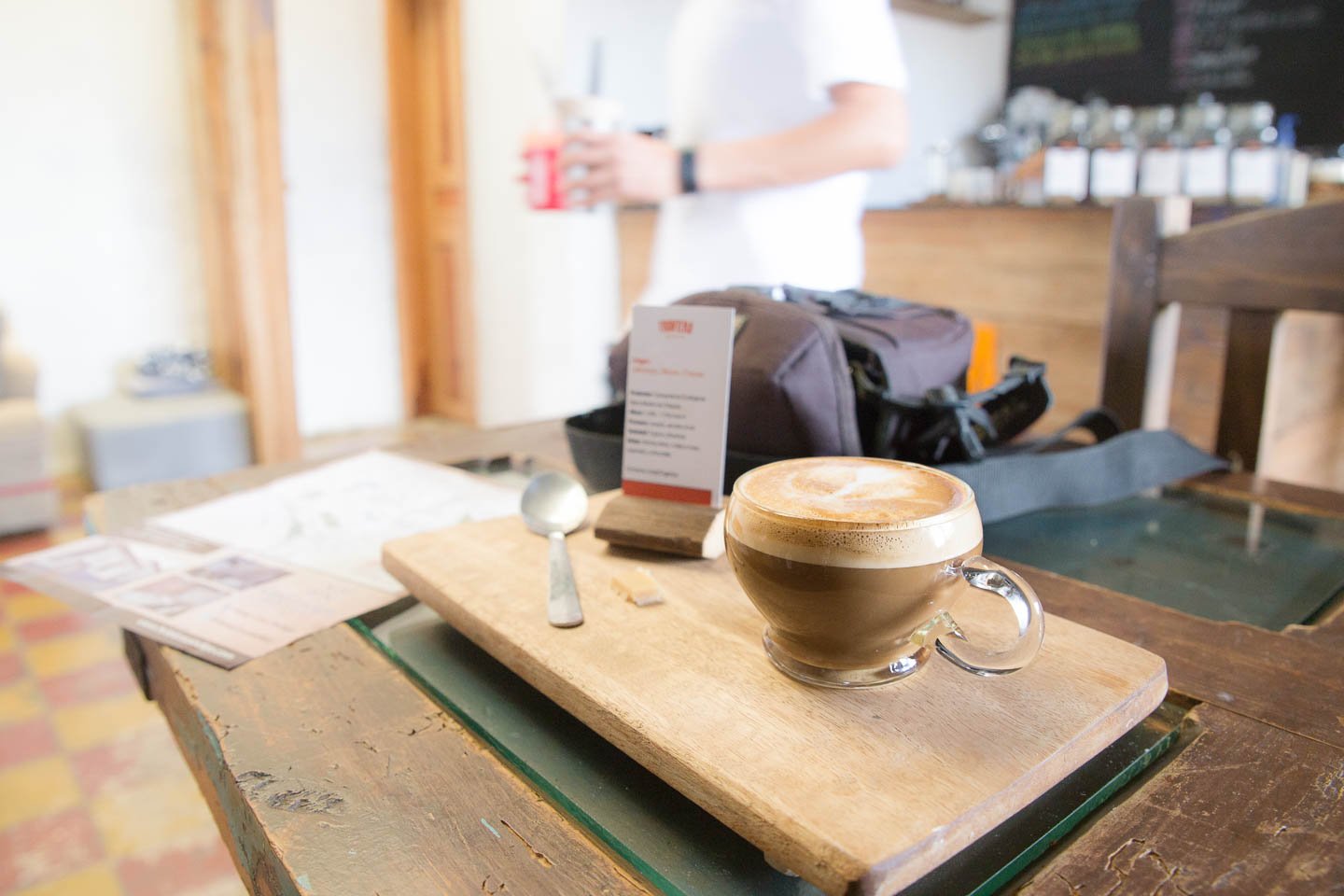 How to identify a hipster coffee shop 101: The coffee is served on a wooden board with the tiniest nubbin of fudge as a side. A card describing the flavour, aroma and provenance of the organic, single origin beans used to manufacture said cup accompanies your beverage. The card, board and fudge appear to have no bearing on the flavour of your coffee. That completely depends on how competent your barista is on any given day. Competency levels may fluctuate.

We stopped for a brunch of coffee and crepes at another cafe (plan “Eat like starving hipsters” was in full swing). When who should we see across the road but Steve and Janette (Tiger 800 Round the World). Who we had very briefly met months earlier in Batopilas in the Copper Canyon. They were equally surprised to see us, it seemed that all the other travellers we had all met were moving a lot faster than the four of us.

They had been staying in town attending Spanish classes and had just popped out for a brief visit to the grocery store which then turned in to several hours chatting about adventures, travel, Mexico and life in general.

We made plans to meet them later in the week once their classes were over. But accidentally got our dates wrong and ended up having to book one more night at the hotel.

So four nights it is.

This left us with plenty of time to explore the town. Most of which we wasted inside coffee shops and craft beer bars. But we did take the time to check out some of the local sights, from the craft markets to the two small churches perched on hills.

That’s a lot of steps for a small church.

Interior of the church.

Decorative flags outside one of the churches.

Visitors leave ribbons giving thanks or making requests of this saint.

The church in the main plaza. You can see a few of the hardy protestors who were staging a sit in outside the church. Despite the relentless stormy weather.

The buildings around town were the typical Pueblo Magico type of brightly painted historical building.

Between the buildings and the cobbled streets, it is easy to see why this is a popular destination with tourist.

Oh look—we made the map. I love it when that happens!

The museum housed replicas of many famous jade artefacts discovered in Mayan ruins.

You could even buy full-sized replicas of your own if you wanted. They cost quite a bit and who knows where you would fit them in a 4Runner.

There was even a bug museum

The bug museum had a spider room. Not sure that we are cool with that.

It’s way easier to take photos of these butterflies when they are nailed to the wall.

Ok. I do feel a little sorry for this guy. He’d pushed his tree over in a huff and then went to have a sulk in the corner. Bless.

There was a ‘Chocolate’ museum. (Which I suspect was really just a chocolate shop that served delicious hot chocolate and artisanal chocolates but had a few old things upstairs—not that I’m complaining)

Nope. We didn’t make the map this time. Apparently pictures of cacao are more important than New Zealand. I’m not sure I can argue with that logic.

I can only assume these Mayan codices say something about chocolate. I didn’t stop to read about them because hot chocolate was calling my name.

Any thoughts of leaving town too promptly were put on hold when the local taxi drivers went on strike. With taxis blocking all the main intersections, the centre of town was reduced to pedestrian only. (Plus a few bikes that could sneak through). It looked like another night of luxury was on the cards.

This, combined with the sunny weather, also gave us the perfect opportunity to further explore the streets of San Cristóbal and take a few photos around town.

Our stay in San Cristóbal had been a magical break from our usual overland travel. Long driving days and leaking tents were replaced by the comfort of a luxury hotel with breakfast included. Craft beer. Hipster coffee. Crepes, salads and gourmet burgers. We had enjoyed it, but it was starting to lose its charm.

Guatemala was calling. Adventure was calling. So we said goodbye to our luxury hotel. Got up bright and early and made it out of town just as taxi drivers were starting to shut down some of the intersections for the day.