The amazing, convenient glaciers of Alaska

One of the best things about Alaska is how convenient all the glaciers are. Sure there are plenty of inaccessible ones, and thousands we would never see without a plane and a lot of time on our hands, but the fact is, there are some that are downright easy to get to.

After travelling around Alaska for a few weeks, we have to report that we became so jaded about glaciers that we stopped bothering to do all the walks to go look at them. To understand how people can become so blasé about such incredible ancient rivers of ice so quickly, perhaps we should share some of the glacier-related highlights of Alaska. Here’s our top three.

Probably the least accessible glacier we visited was the Holgate glacier in the Kenai Fjords national park. This one was inaccessible only in the sense that we couldn’t walk or drive to it. It wasn’t like we went to a lot of trouble to get there, we just joined a boat tour, gawped at some wildlife and we were there. 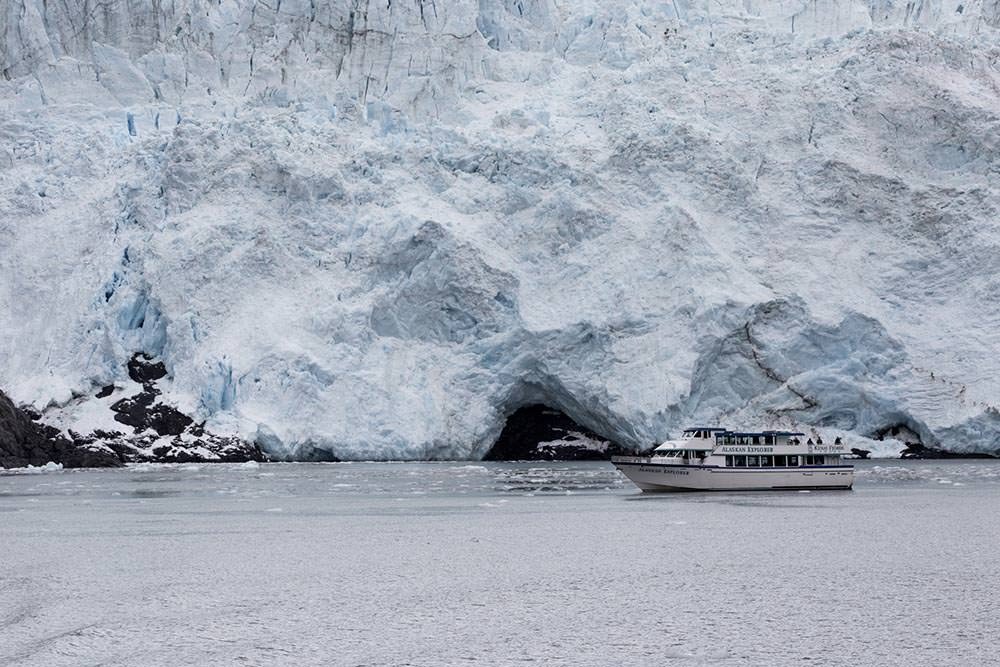 The laziest way to see a glacier! 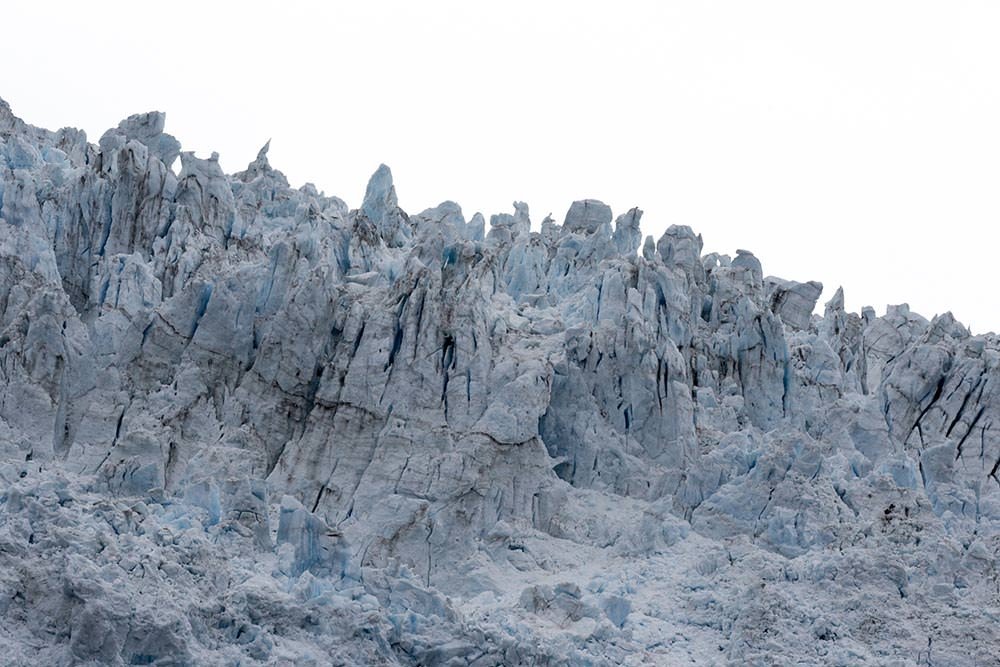 Sitting in silence in the boat listening to the cracking ice of the glacier, waiting for chunks to calve into the ocean is one of this experiences that just makes you grin stupidly from ear to ear. (Photo of ear to ear grinning not included) 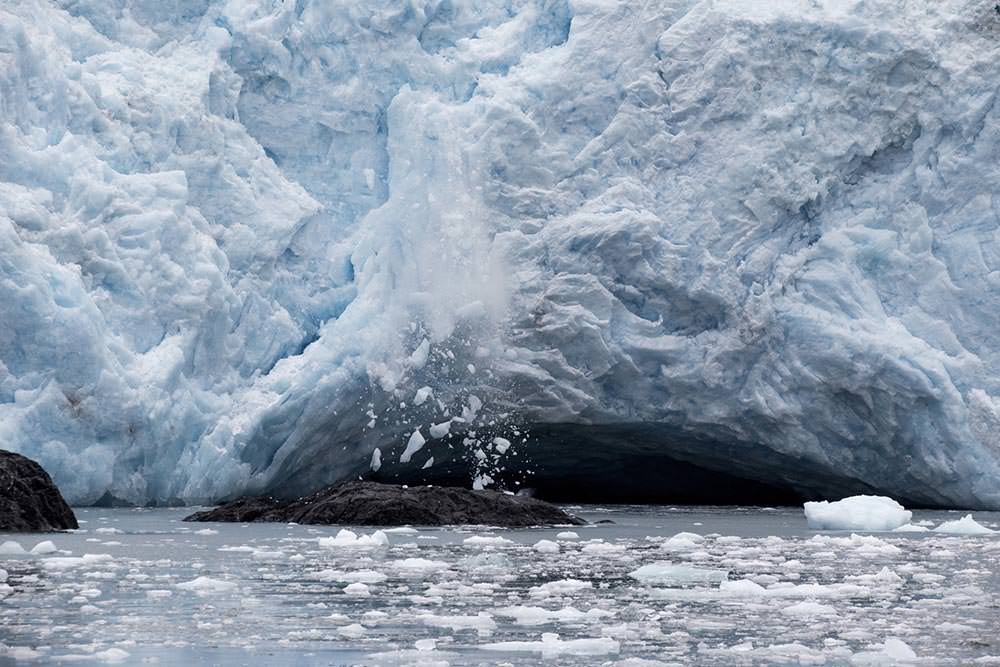 Two—Exit Glacier (and the Harding Icefield)

The Exit Glacier near Seward is billed as being a pretty accessible glacier, and for good reason. After driving right in to the visitors centre carpark, we found ourselves within a short work of the terminal face.

Instead of taking the gentle stroll to the lower end of the dramatic tongue of ice rolling down the hillside, why not embark on the 9 mile return hike up the side of the glacier to the icefield above?

Ben was a bit dubious about starting such a walk (our first decent excursion in bear country) after 4 in the afternoon. The guidebook described it as ‘strenuous’ and we were lacking in fitness and dinner. But after a quick chat to the rangers we confirmed that the weather was heading downhill the next day, so it was our best chance.

That is one of the great things about Alaska in the summer is that embarking on a 8.2 mile (13.1 km) walk to a barren icefield after 4 in the afternoon is actually quite a reasonable option. The sun wasn’t planning on setting until 11:30pm, so there was no rush.

Fortunately, it transpired that the word ‘strenuous’ had been used to describe the walk in contrast to the casual trundle to the terminal face. The path up was a relatively gentle, if somewhat continuous uphill climb. It proved to be an enjoyable walk, even with our decreased fitness levels.

The whole way up, the views just got better… 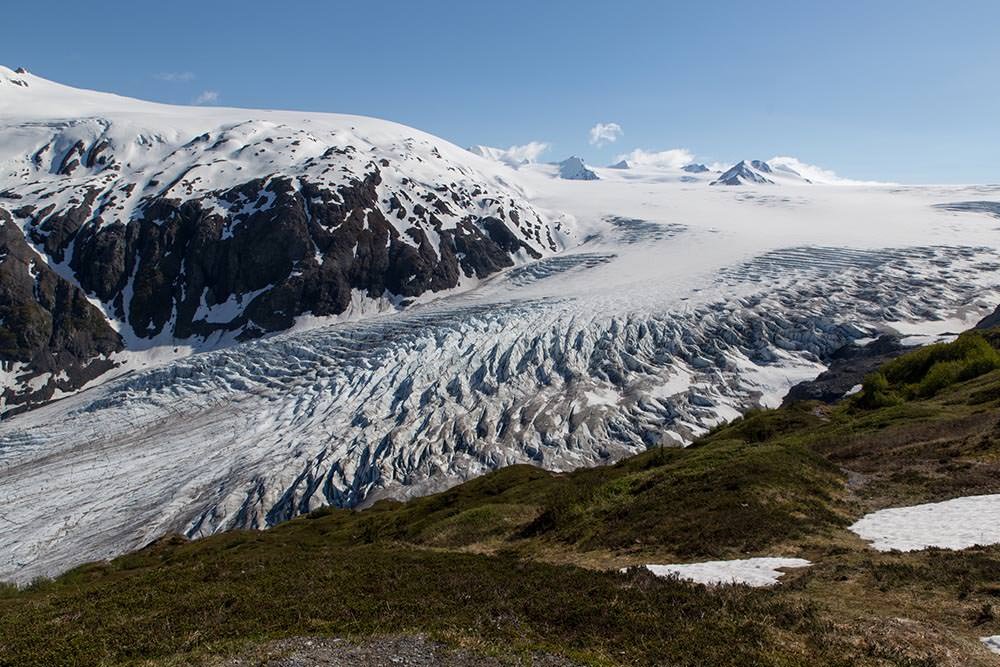 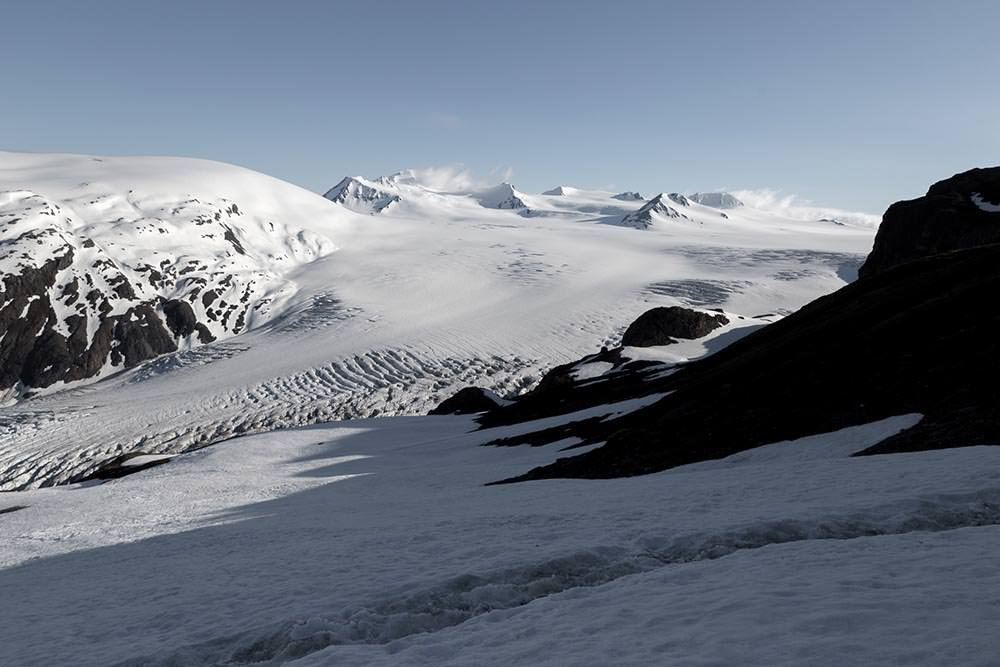 Top of the Exit Glacier at the Harding Icefield

Just to make Emma’s day (glaciers + wildlife are typically enough to send her into a frenzy of babbling excitement) we even encountered these little chaps. Not knowing what they were, we opted to call them Mountain Beavers. It turns out that they are Hoary Marmots, which is a much better name than we could have ever made up for them. 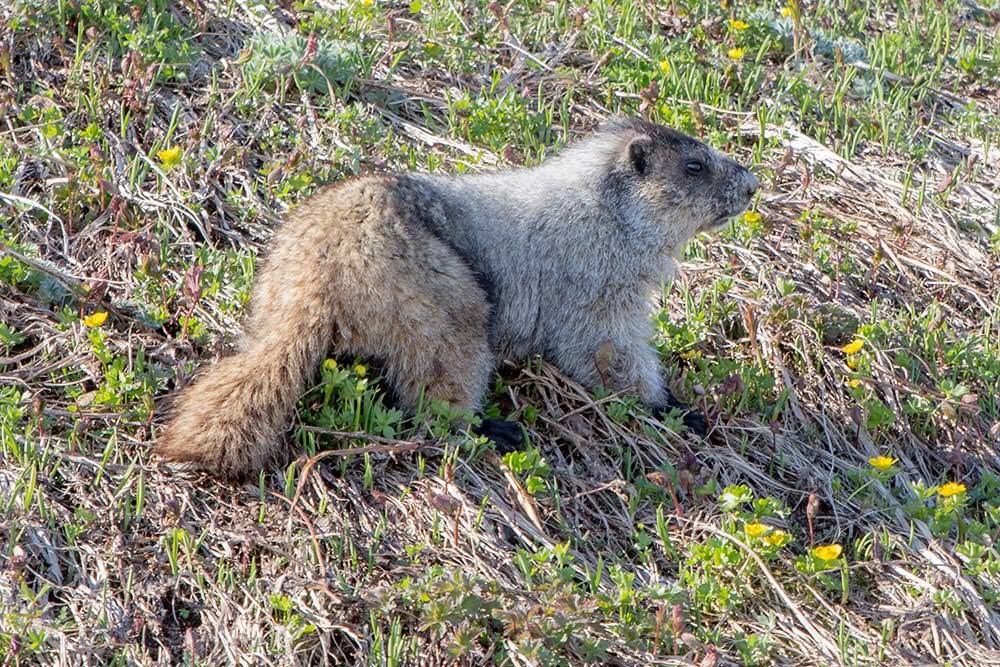 The Mountain Beaver, aka. Hoary Marmot

Finally we reached the top. 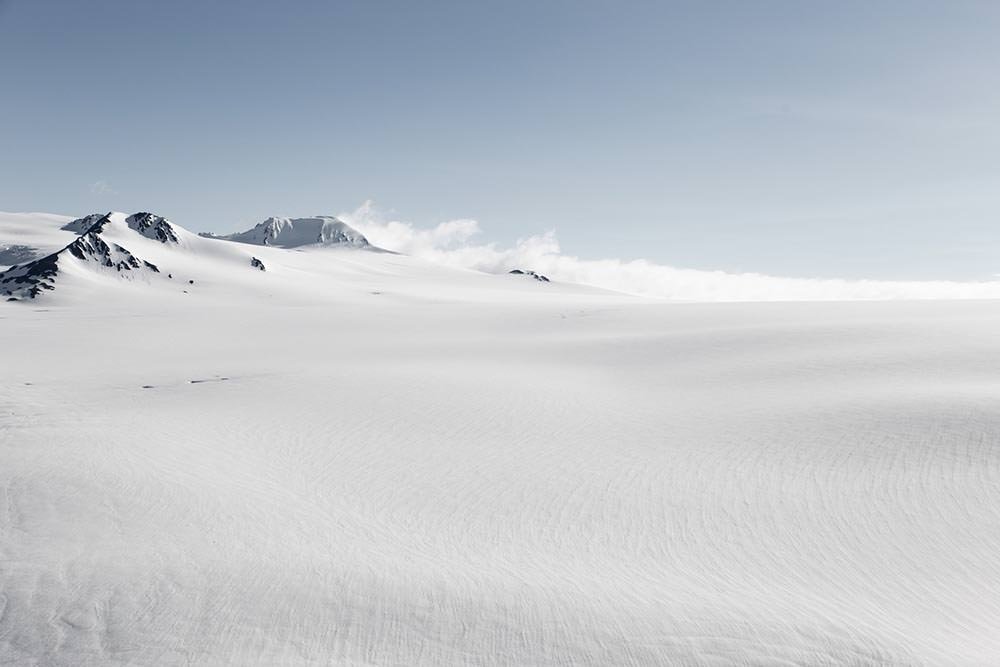 Even Ben, (who had been recovering from a mild disagreement with some food we had eaten and had not been especially keen on the idea on the plan from the outset) had to agree that the views were more than worth the effort. The Harding Ice field stretched off as far as the eye could see. 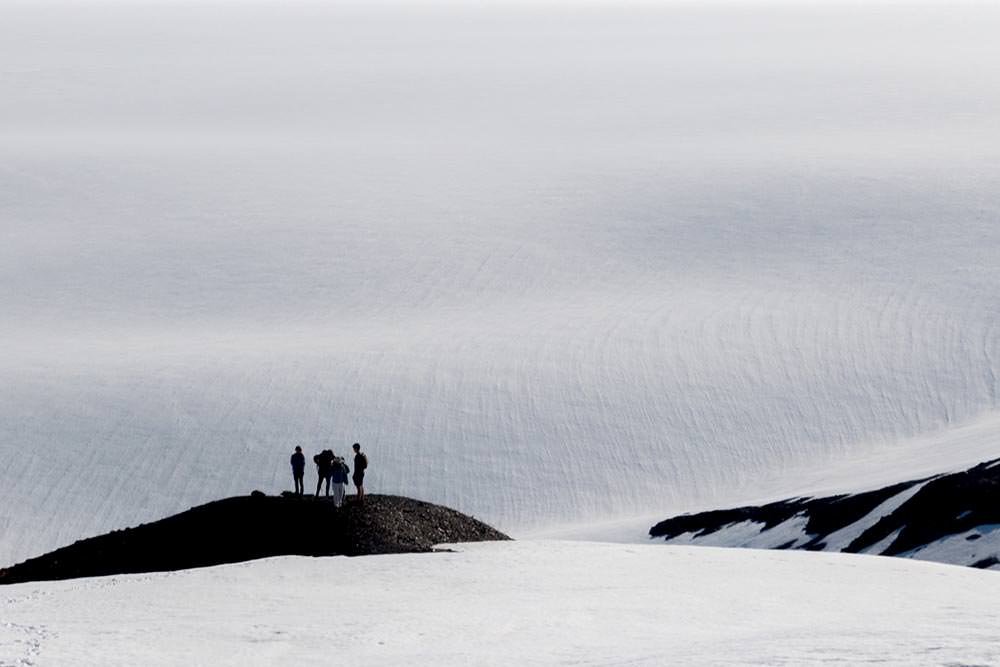 After heading back to the car park, despite being nearly 9pm we opted to check out the short 1 mile stroll to the terminal face of the glacier. Yeah, it was alright, pretty good really, but we were glad we took the long way up the side. 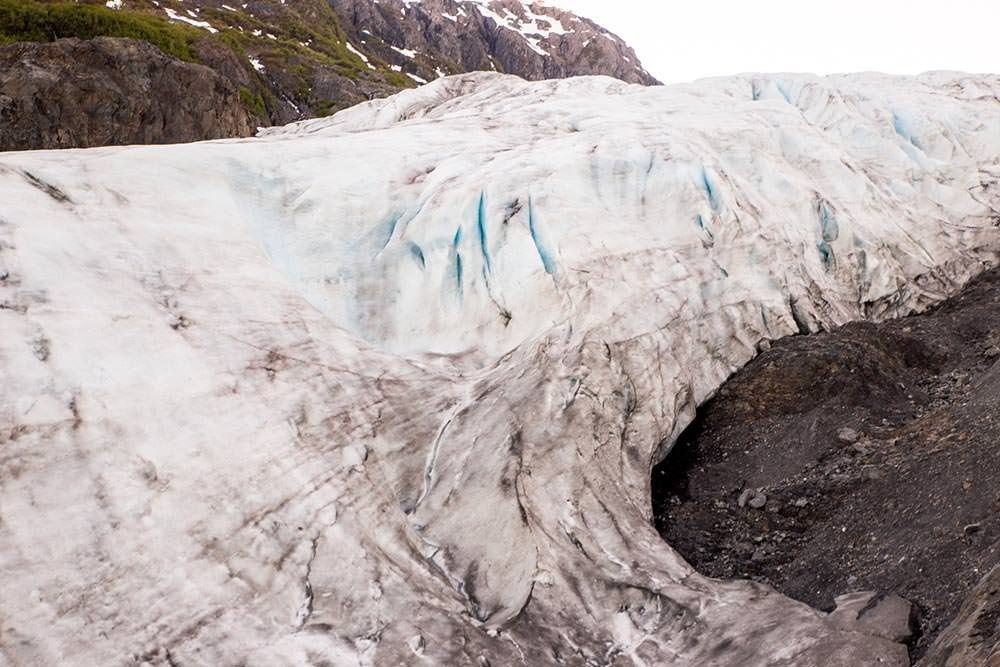 What we didn’t do at the top of the Exit Glacier was walk on the ice, mostly due to not having any appropriate gear and finding the idea of falling down a hidden crevasse an unappealing way to end the day.

Fortunately, later in our travels, we stumbled on a great spot for a bit of glacier wandering.

We nearly didn’t bother visiting the Matanuska glacier. The weather wasn’t looking good, it had been raining relentlessly all night an there was a $20 fee per person just to drive to the car park by the glacier’s face. Things were not looking hopeful.

We decided that we should give it a chance though, glaciers do tend to be pretty awesome.

Things started looking up when we headed in to pay our fee. The chap at the store handed us a waiver to sign. In our experience, signing a waiver is usually a prelude to fun.

We were not disappointed. Signing the waiver meant we were welcome to go trundle about on the glacier for as long as we wanted. The only limits placed on our exploration were as a result of the fact that we only had micro-spikes, not proper crampons. With nothing to stick our toes into the ice with, the steeper slopes with sketchy run-offs were out of the question. 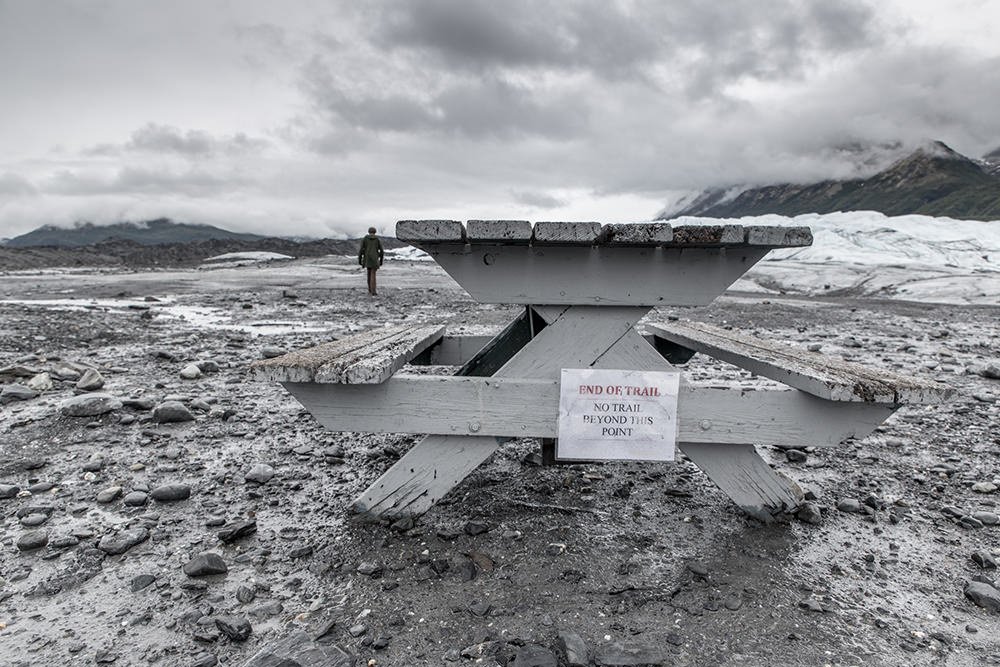 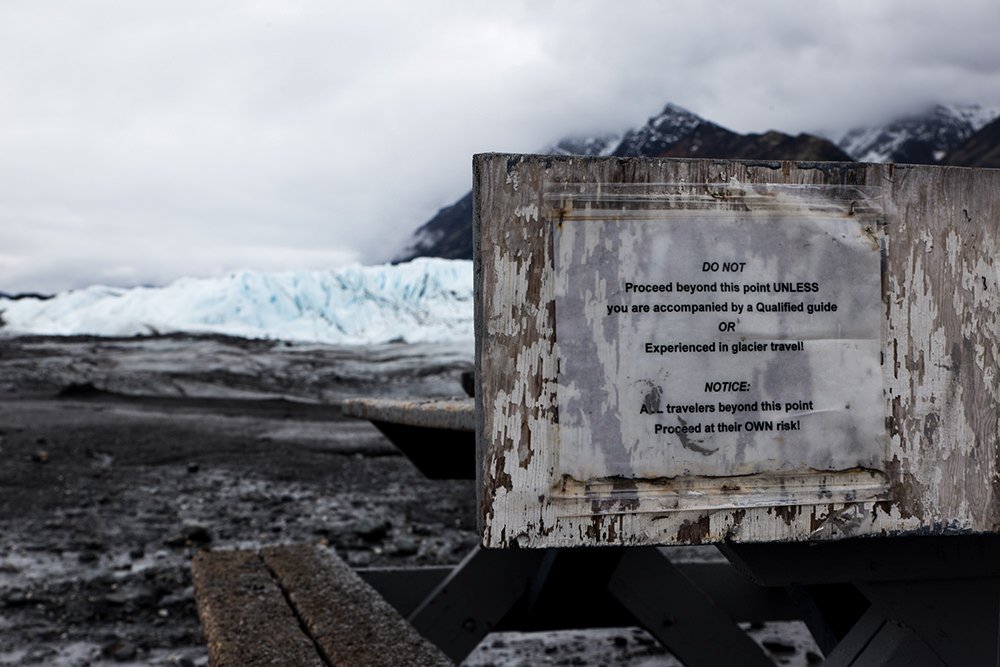 We weren’t sure what level of experience was required. But I’ve seen a few glaciers before, does that count?

Because the lower reaches of the Matanuska glacier is pretty calm and stable, (not jagged and crevasse filled), there was a lot of scope for exploration without committing to anything beyond our skill level. On the lower sections of ice plenty of people were sliding around in just their walking shoes and with our limited resources we managed to get as far up the glacier as any of the guided groups with proper crampons, so we feel like we got our $40 worth.

Here’s some of our $40 worth of glacier photos: