The lowest point of our trip 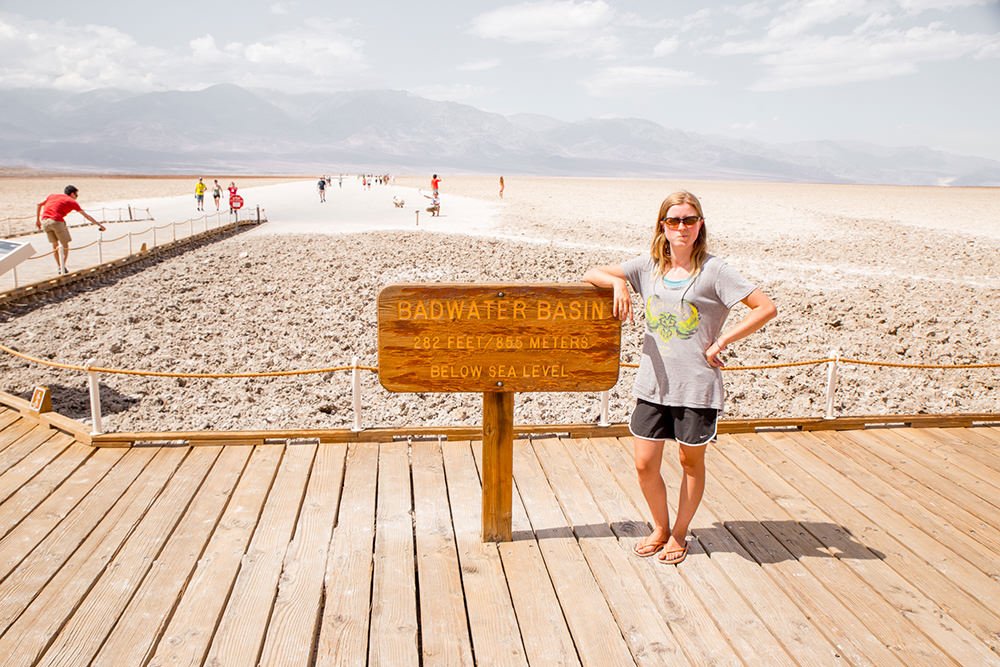 All trips have their low points. This journey is no exception.

Fortunately this particular low point is measured in altitude, not in how many hours we spent plotting to poison each other.

We arrived in Death Valley after the worst of the summer heat… or at least we thought we had. It was still a cozy 118ºF (47.7ºC) when we posed for photos at the thermometer outside Furnace Creek visitor centre. It did tick over to 119ºF (48.3ºC) briefly before we left the car park, but I guess that has nothing on their record high of 134ºF (57ºC).

Death Valley is famous for being pretty cosy. This is due to the valley itself being below sea level, hemmed in with jagged mountain ranges. The dry climate in the valley means little vegetation to reflect the heat, instead the air on the valley floor heats up, remains trapped in the area by the mountain ranges and the increased pressure due to the low altitude. This air cycles around, getting increasingly hot and basically heating the area up like an oven.

Conveniently, as one of the drier places on the planet, we figured at least we didn’t have to worry about getting rained on, so we thought we might as well get out and enjoy the non-stop sunshine. After a rainy summer in Alaska and Canada, we had been enjoying the drier climate of Nevada and Eastern California.

When we dropped by the Furnace Creek Visitor centre, the ranger had mentioned that as it was pretty cozy and warm, he didn’t recommend walking far or camping at the valley floor. 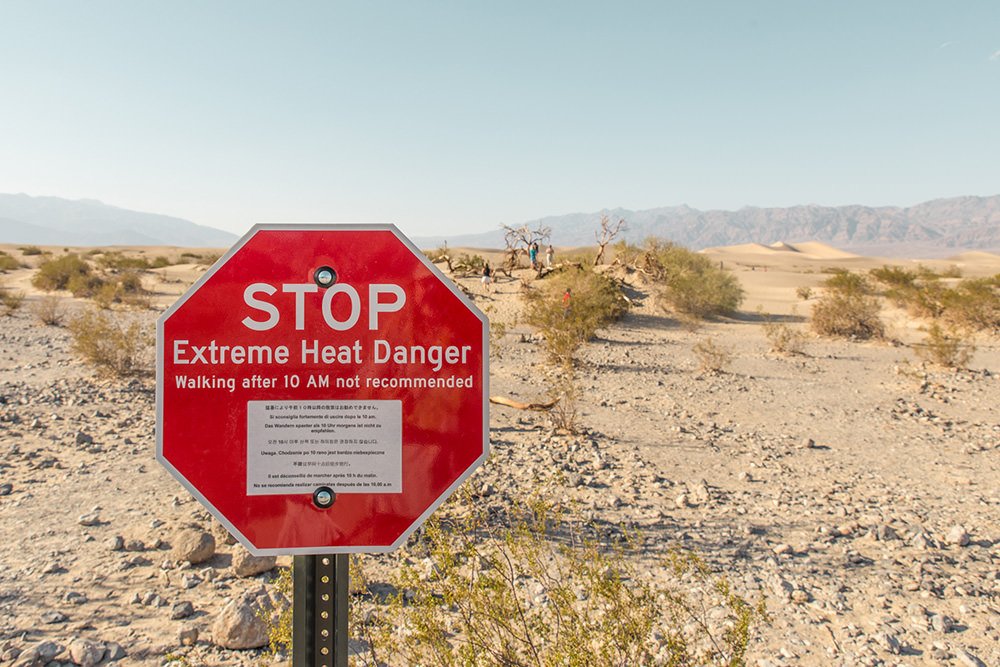 Death Valley it turns out, has plenty of extreme landscapes to enjoy, most of which you don’t have to stray very far from the air-conditioned comfort of your vehicle to see… convenient!

The first night we camped in Death Valley we headed to the highest camp spot in the park at Mahogany Flat (thanks Next Big Adventure for the tip!) and camping at 8200′ (2500m) we were bundling up to stay warm rather than sweltering on the valley floor. 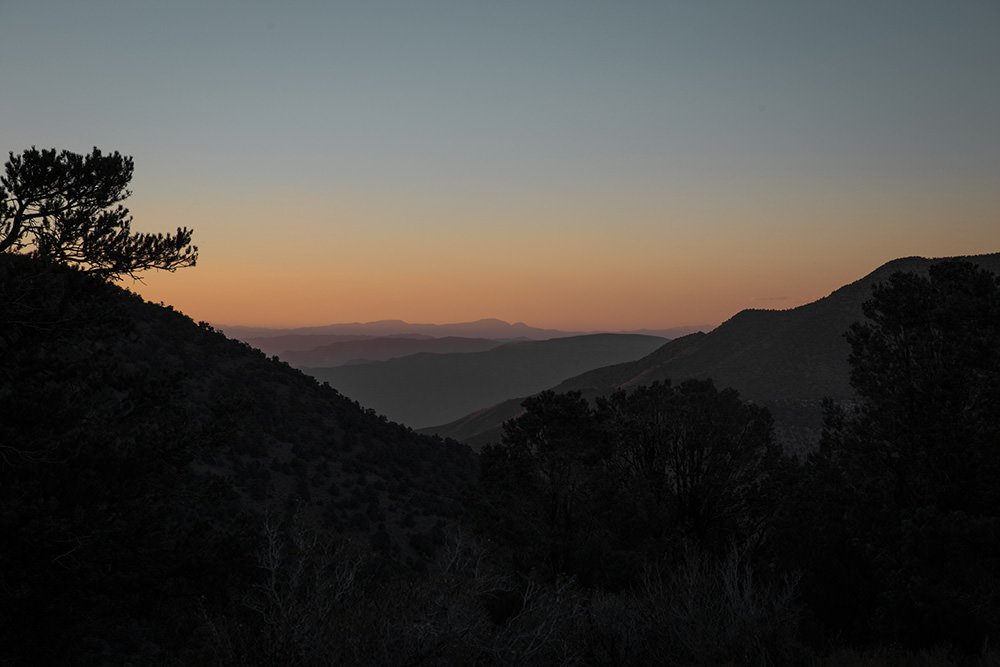 The other thing that Death Valley is famous for is clear night skies—perfect for stargazing. But this guy got in the way, so we took his photo instead: 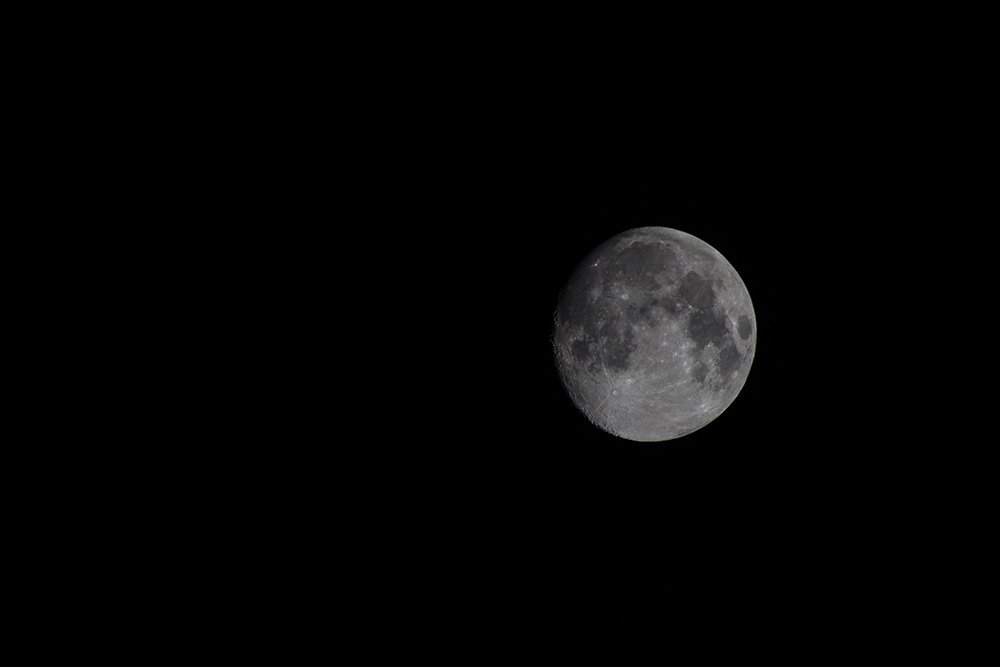 Not being able to resist a detour to view the mysterious moving rocks, we headed to the Racetrack Playa the next day. These rocks are famous for leaving trails in the surface of the dry lake bed where they sit, showing that they clearly move, but leaving scientists baffled for years. Recently they have figured out it is due to the break up and melting of very thin sheets of ice, moving the rocks with them as they shift. Which takes some of the mystery away, but it is still a pretty neat phenomena.

We drove through a windy back road to get there. The road was marked clearly as ‘possibly impassable 4wd only’ on the map, but it turned out to be a pleasant drive.

Until we got to Teakettle Junction where it met the ‘main road’ out to the Playa. Welcome to the worlds most heavily washboarded road.

With the contents of our house on wheels rattling violently with every metre we crawled forward, whilst simultaneously our fillings were rattling out of our teeth, we knew it was going to be slow progress.

But at the end magical moving rocks awaited, so we persevered while our home shuddered violently around us, pots and pans crashed together, tools bounced and the water container rolled exuberantly.

We eventually rolled to a halt at a spot about two-thirds of the way along the playa where we could see some rocks scattered about on the surface. We wandered out excitedly expecting to see rocks leaving big trails gouged beneath them in all directions.

We could see some trails, but they weren’t that clearly defined and certainly not worth the miles of washboarded road still remaining between us and our planned camp spot for the day. 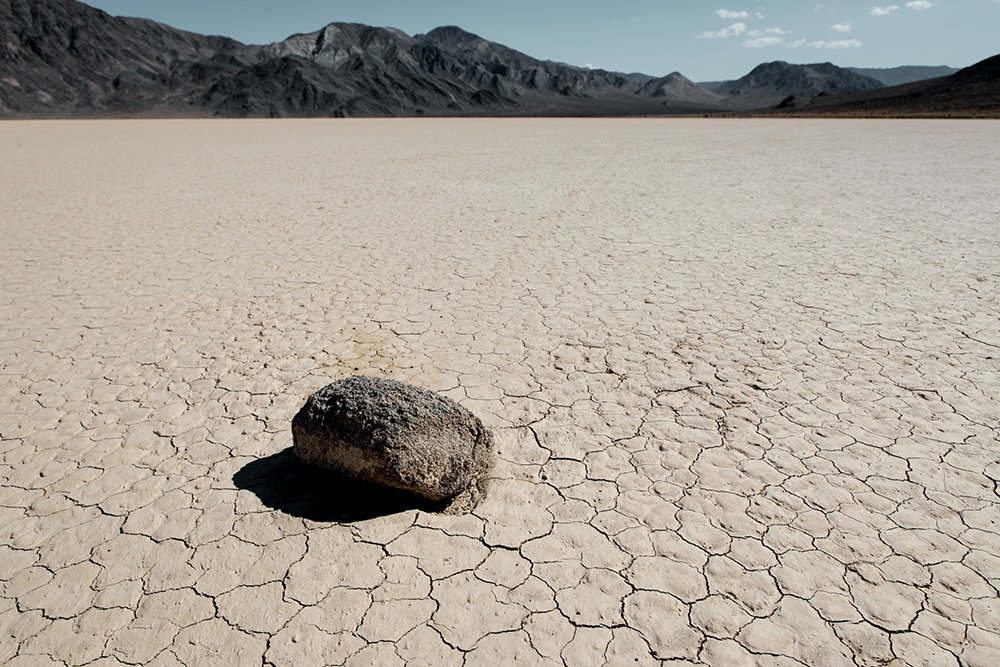 We went to check out the ‘Grandstand’ on our way back out. A strange rocky outcrop in the middle of the flat dry lake bed. 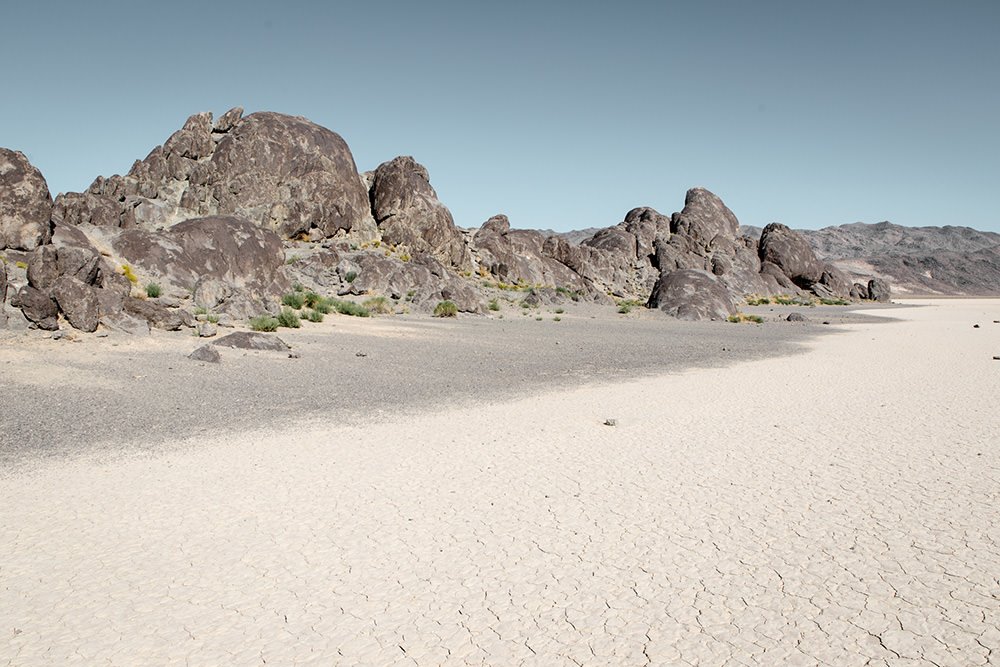 It wasn’t like the area wasn’t scenic. There just hadn’t been enough magical moving rocks to justify pulverising the contents of our home for so many miles.

We walked back to the car muttering things like ‘well at least the drive in was scenic’. When Ben spotted that the car was haemorrhaging fluid at an alarming rate. 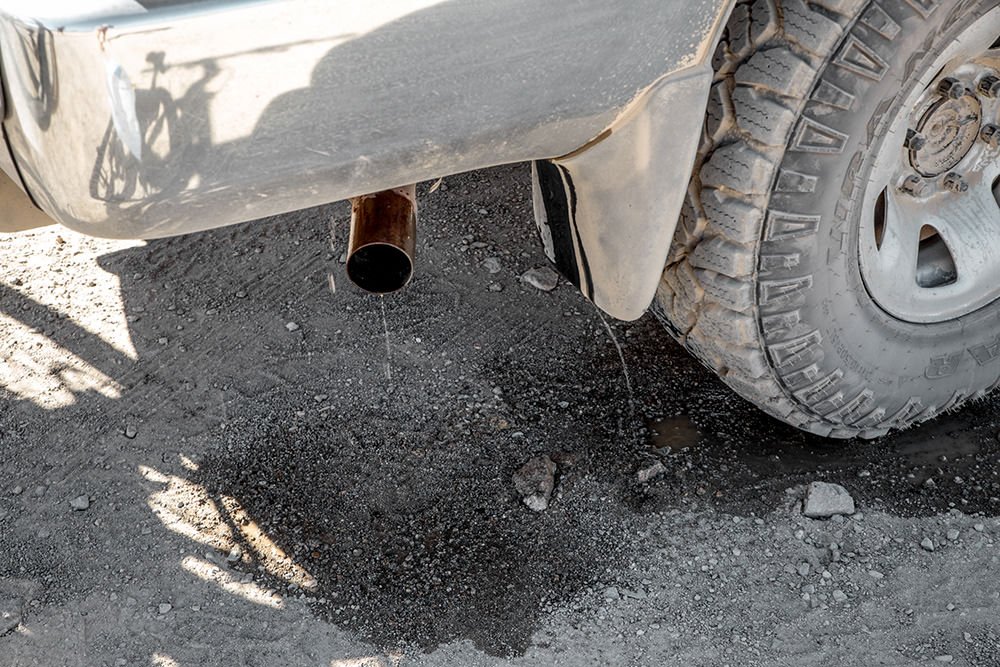 Hmmm… where could that be coming from?

It was about now that we remembered the other piece of advice that the ranger had given us. Don’t drive the back roads when it is hot—there’s no help out there.

Luckily, it turns out that the culprit was actually our spare water bottle that had burst open due to all the rough roads and was simply haemorrhaging precious H2O in one of the driest places on earth, several miles from civilisation. 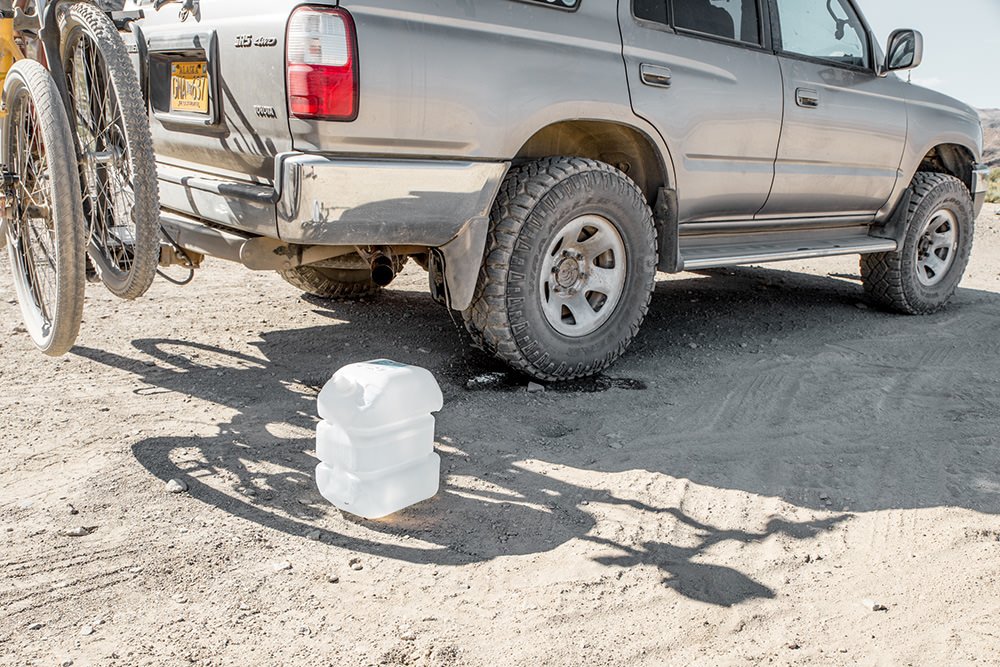 Oh well, no worries then. It isn’t like we’re going to get thirsty here… right?

We battled the enraging washboards all the way back to the paved road. Stopping to enjoy some of Death Valley’s amazing scenery to keep our spirits up.

It was getting late and we made the call to camp at Mesquite Spring which was at 1800′ (450m) above sea level and therefore cooler than camping on the valley floor. At least that is what we thought.

We set up camp. Noted the clouds forming. Thought nothing more of it. Then the wind started to blow.

Our camp was buffeted by gust after gust of superheated air from the valley floor. This kept the evening temperature in our camp spot at what one can only assume was the low 40ºs (over 100ºF). Toasty. I guess that’s why there were so few people camping there… oops.

Finally in the early hours of the morning it cooled to a temperature where it was possible to sleep… then we awoke to the sound of rain. 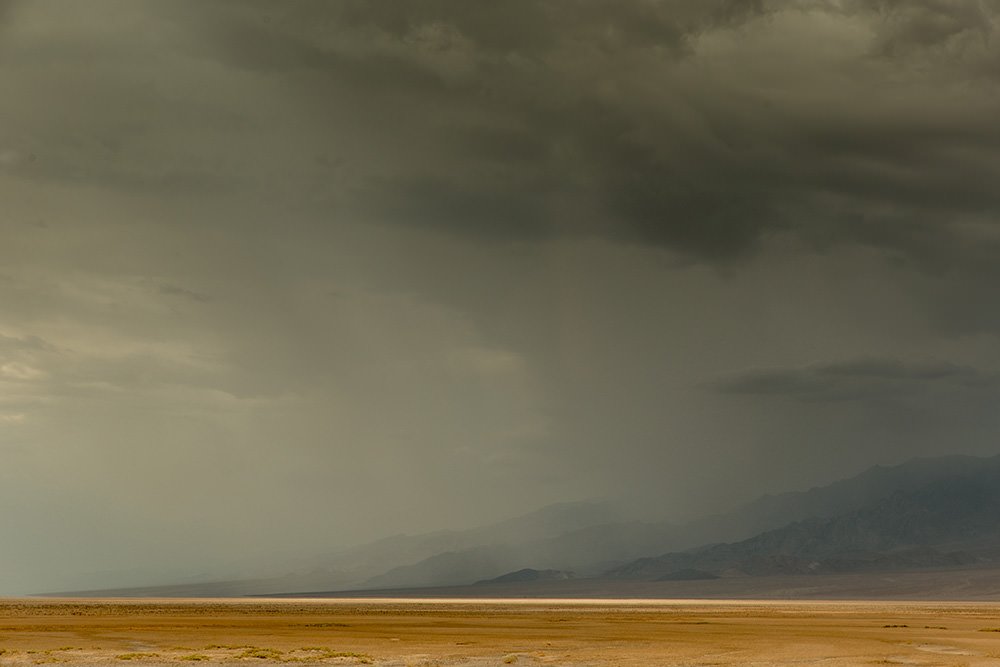 In the one of the driest places on earth? Really?

The rain had brought with it some chilly temperatures, so we bundled up in our winter woollies: 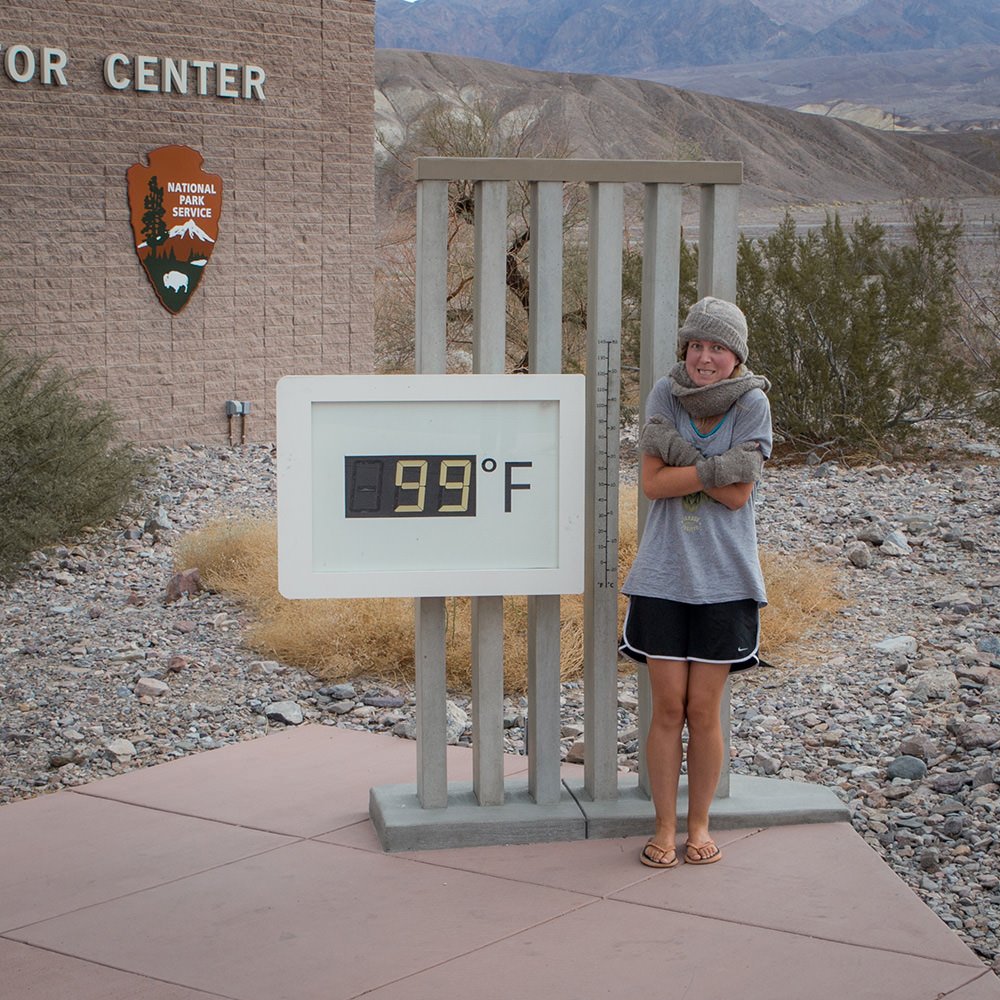 Followed by a sightseeing tour of Death Valley in the rain:

The skies cleared for the absolute lowest point of our trip: 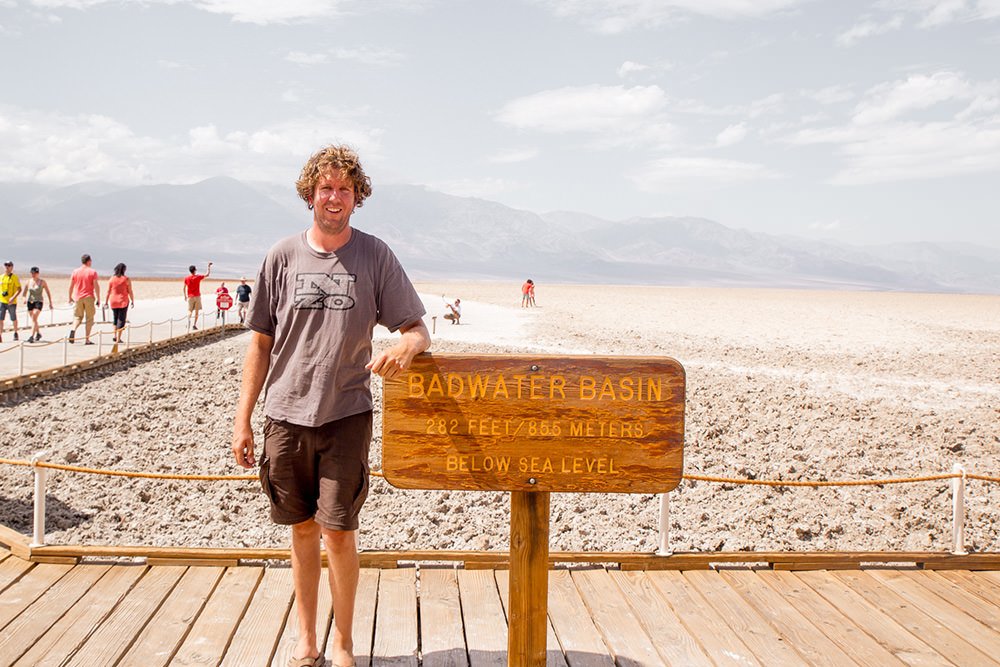 Badwater basin is 85m below sea level according to the sign. 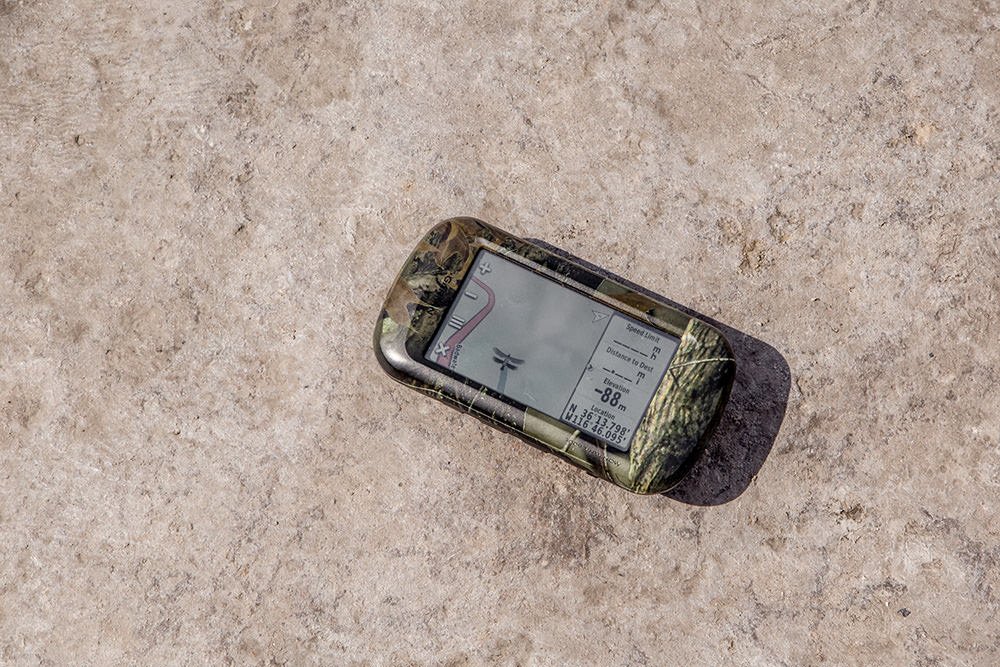 But Javier (our GPS) reckoned it was closer to -88m.

No matter who you ask, we suspect that this will be the lowest point of the trip.

Until we really do decide to poison each other.

Haven’t poisoned each other… yet…

* It turns out, we have been told, that if we had driven right to the very far end, not just 2/3 of the way along, that was where all the good rocks were. Live and learn. Probably can’t be bothered going back just yet…