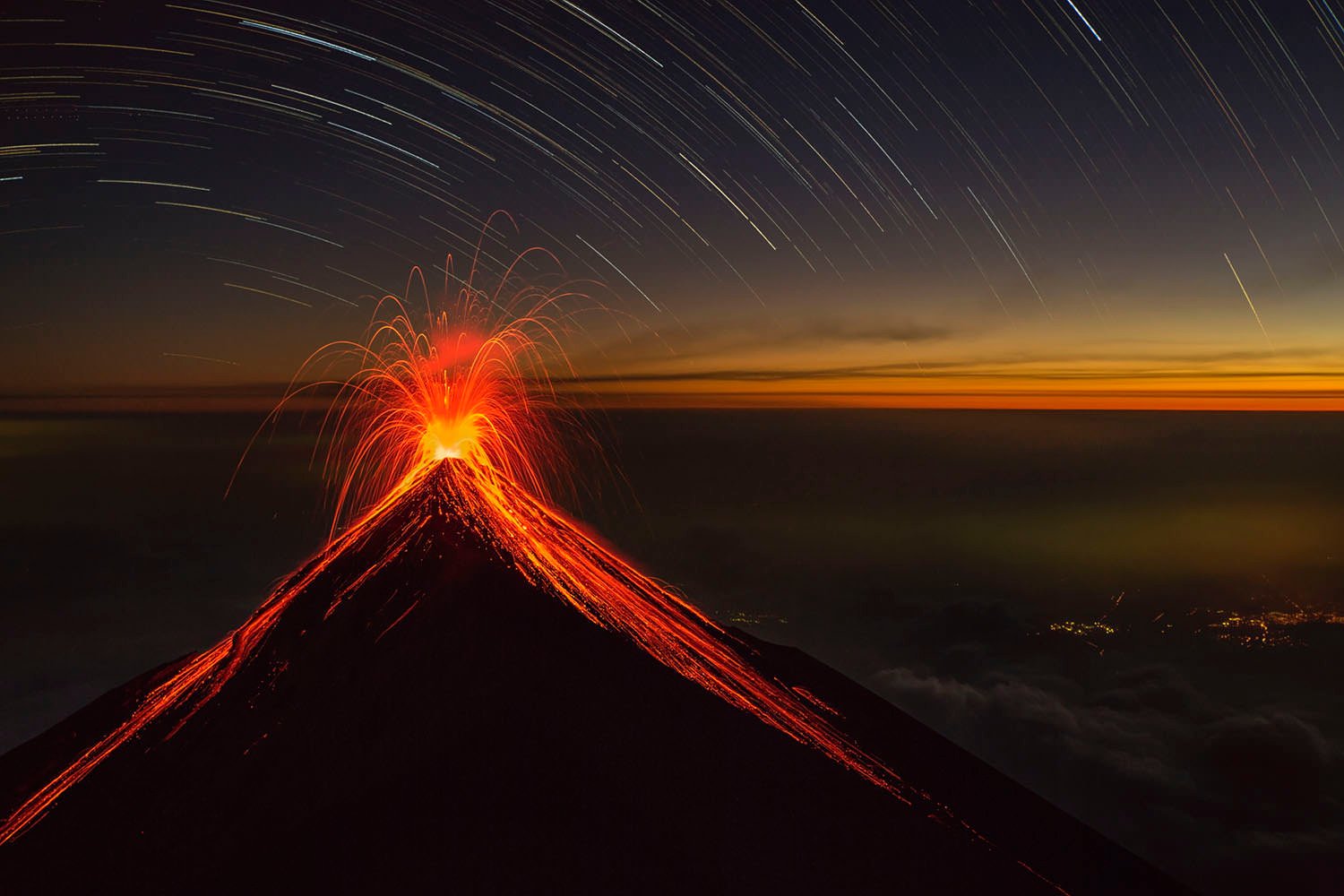 A little over a week after our first miserable failure. We were back, climbing Volcán Acatenango… again.

Outside Juan’s home, we filled our day packs with our warmest gear and snacks. An afternoon wander only. No camping in the cold this time.

The dry ground made the going quick. It wasn’t long before we were in the upper reaches of the decaying pine forest.

The cloud crept in… again. 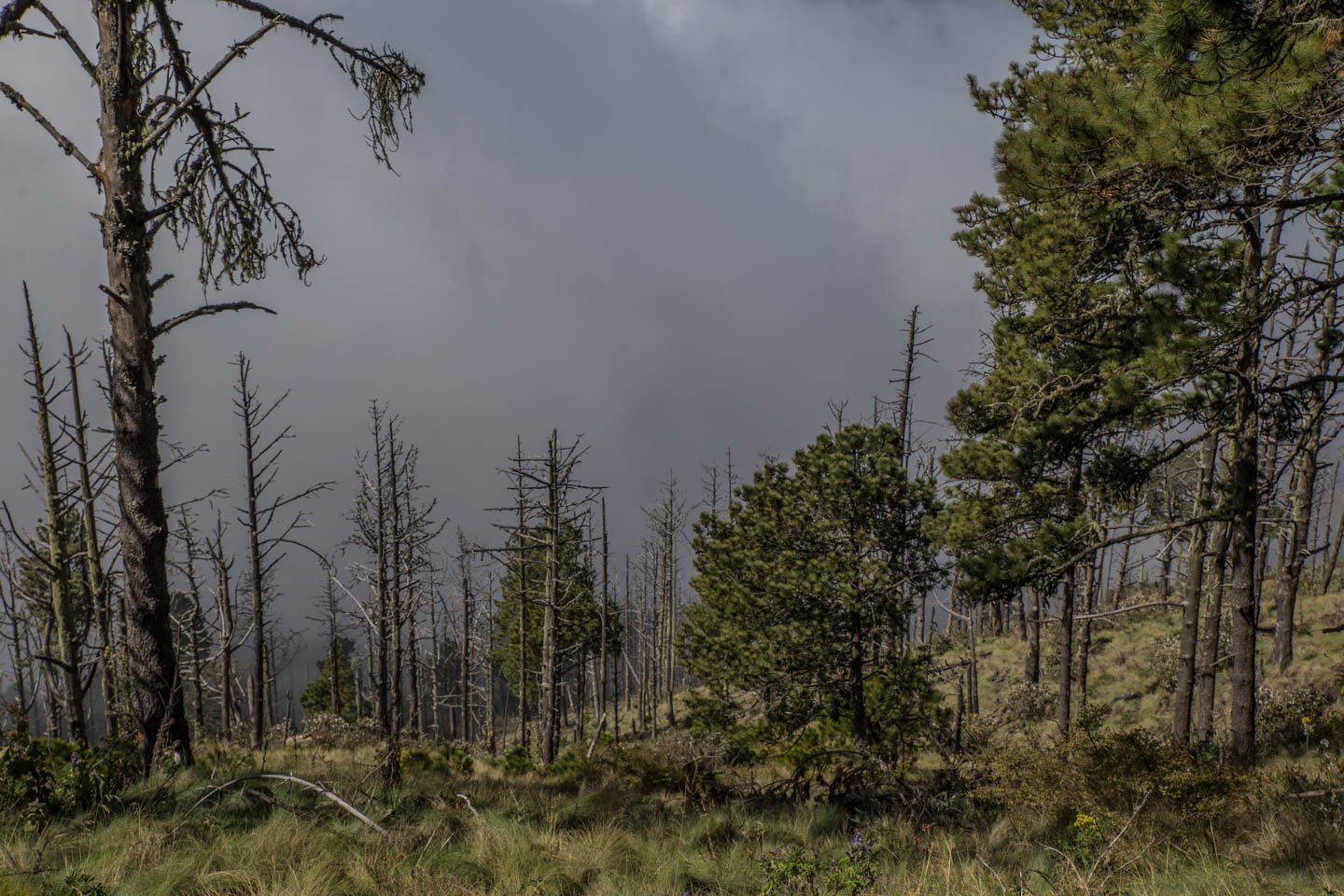 Enveloped in mist, we didn’t expect to see much. At least we had enjoyed the climb this time, if nothing else.

Leaving the treeline we made for the saddle between Acatenango’s two peaks. Our goal was Pico Mayor—the taller of the two, with an unobstructed view of Fuego.

As we ascended through the layer of mist. Far below, amidst an ocean of cloud ‘volcanic islands’ began to appear. 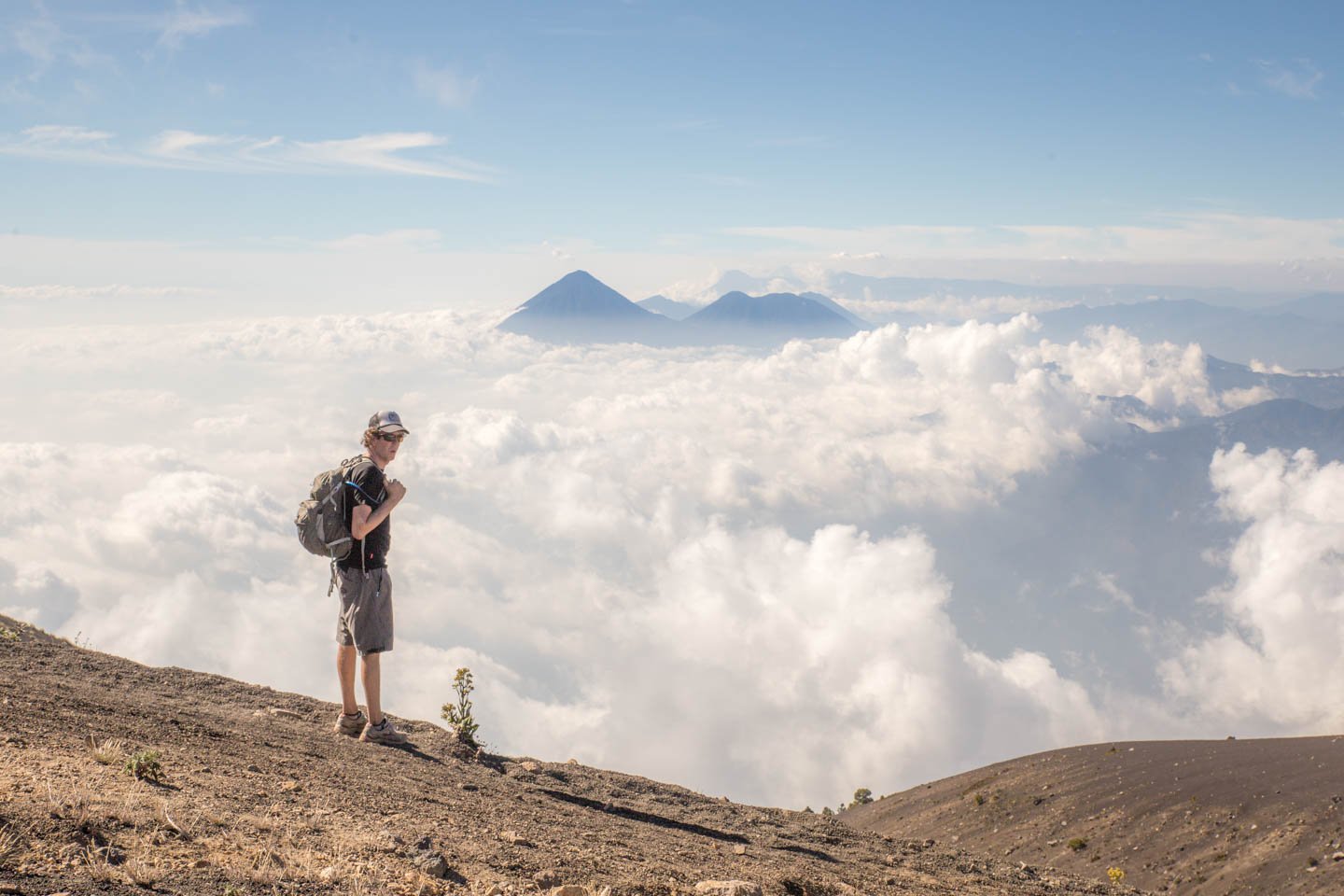 Towards Lago Atitlán we could see the summits of Volcanes San Pedro, Tolimán and Atitlán. 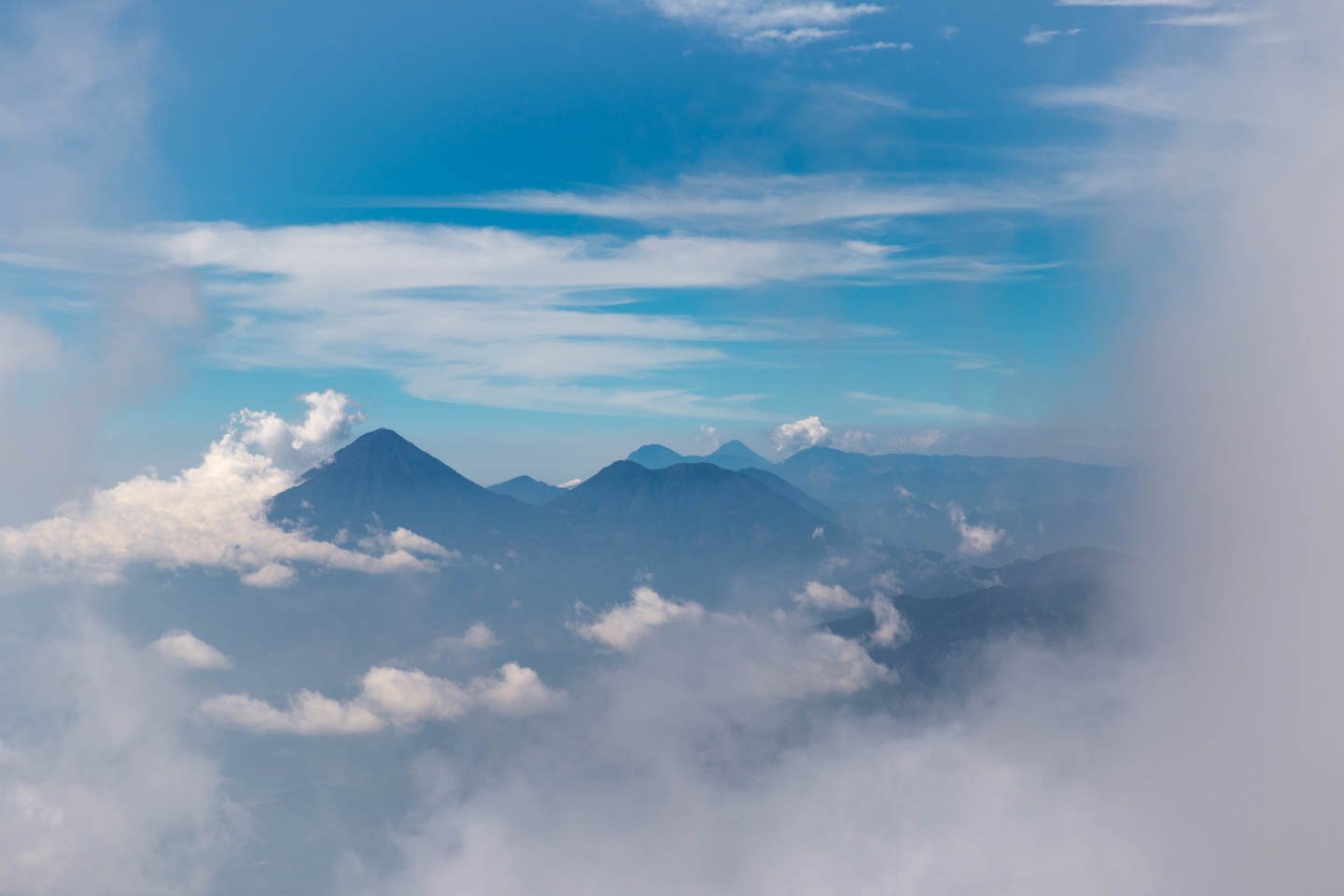 The last stretch to the top was brutally steep. Just out of sight, Fuego was grumbling. What better motivation to make the climb in record time! 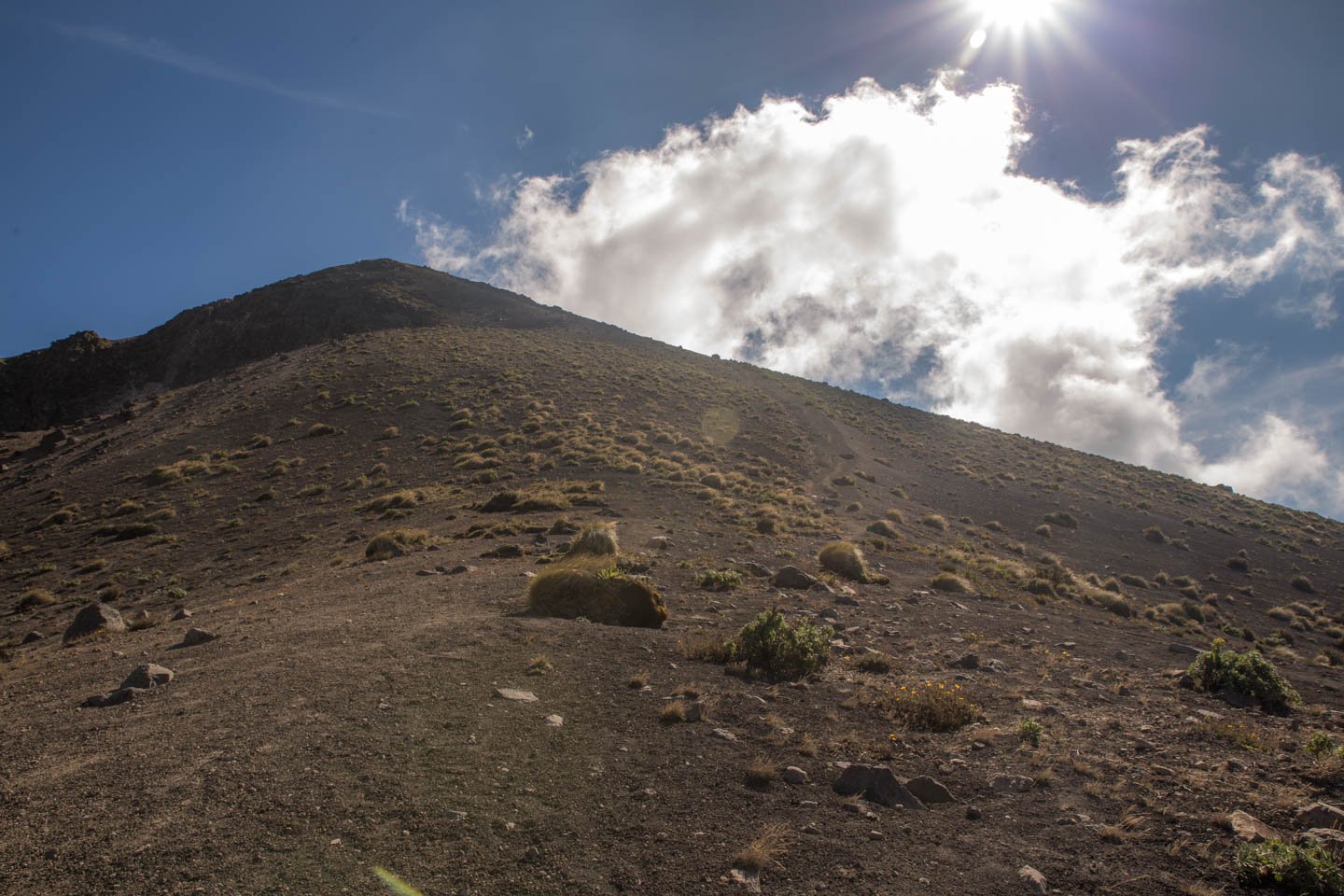 Not helped by our break at sea level, we were gasping for air. We took determined strides towards the top. The end was in sight.

My legs shook, like jelly—was it with the effort, or the anticipation? Probably both. The last hundred metres were painfully slow. Every step forward triggered a violent slide back. Cursing my footwear choice—light sneakers instead of boots. I took the final wobbly strides towards the summit.

Volcán de Agua, which towers above Antigua, was now visible far below. Poking out from the swirling sea of cloud. 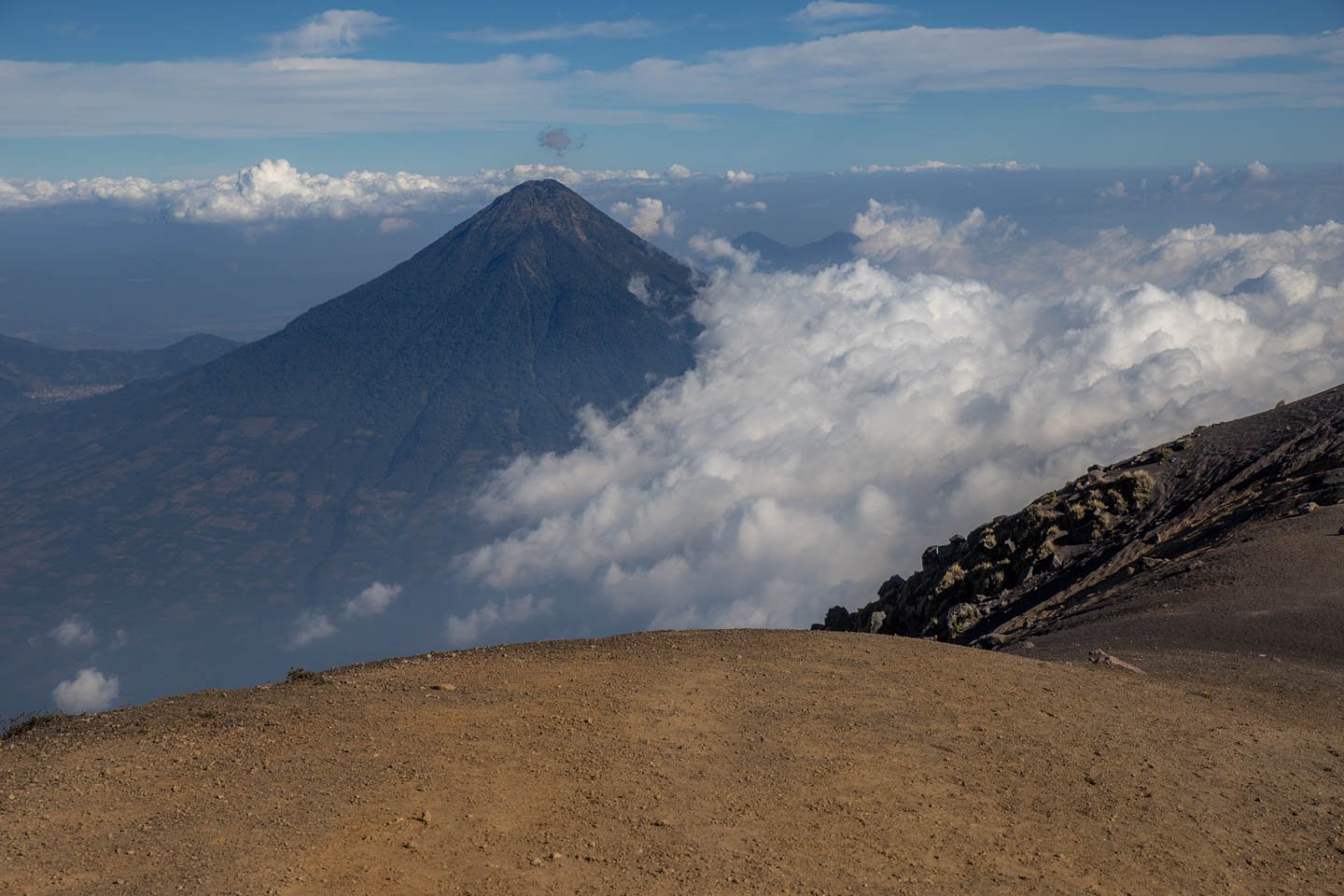 An earth-shaking boom. A plume of smoke appeared from behind the summit of Acatenango. A few more steps and the peak of Fuego was visible, belching steam and smoke into the atmosphere. 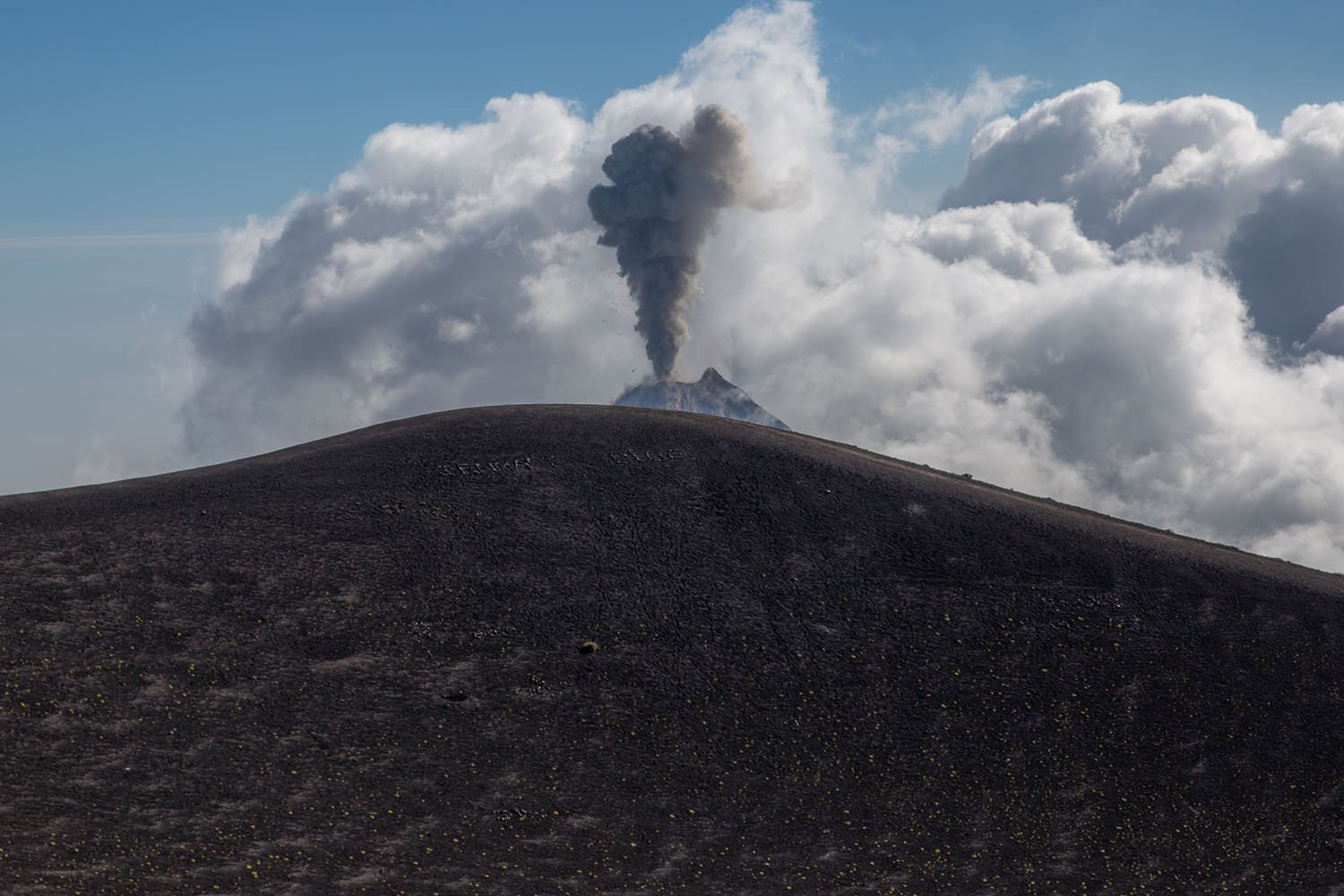 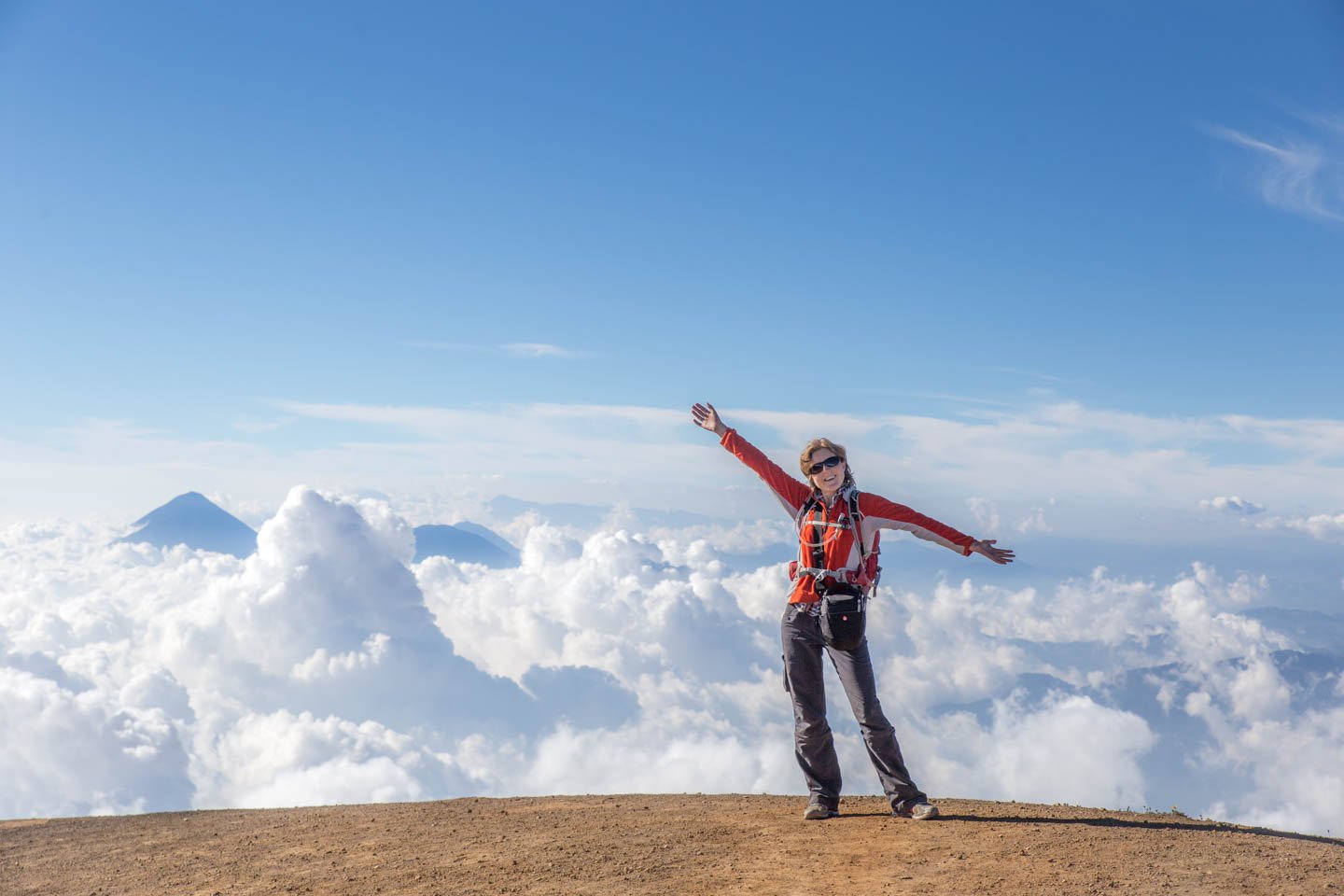 Finding a sheltered nook with a view of the eruptions we settled in for the afternoon.

We imagined the tour groups below, pitching their tents in the cloud, hopeful for a glimpse of Fuego. We wondered if the view would clear for them. 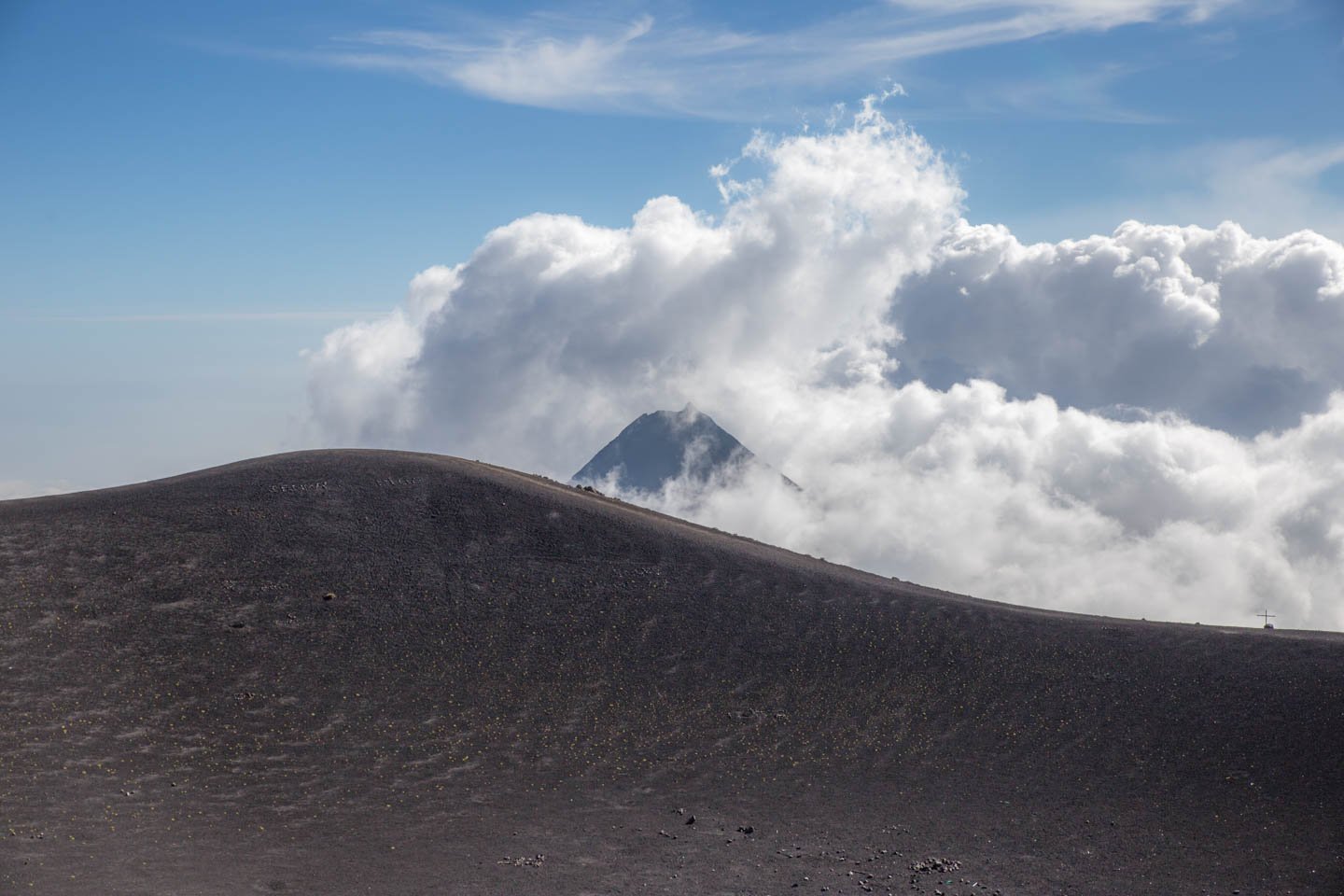 The afternoon wore on, the cloud, ebbed and flowed. 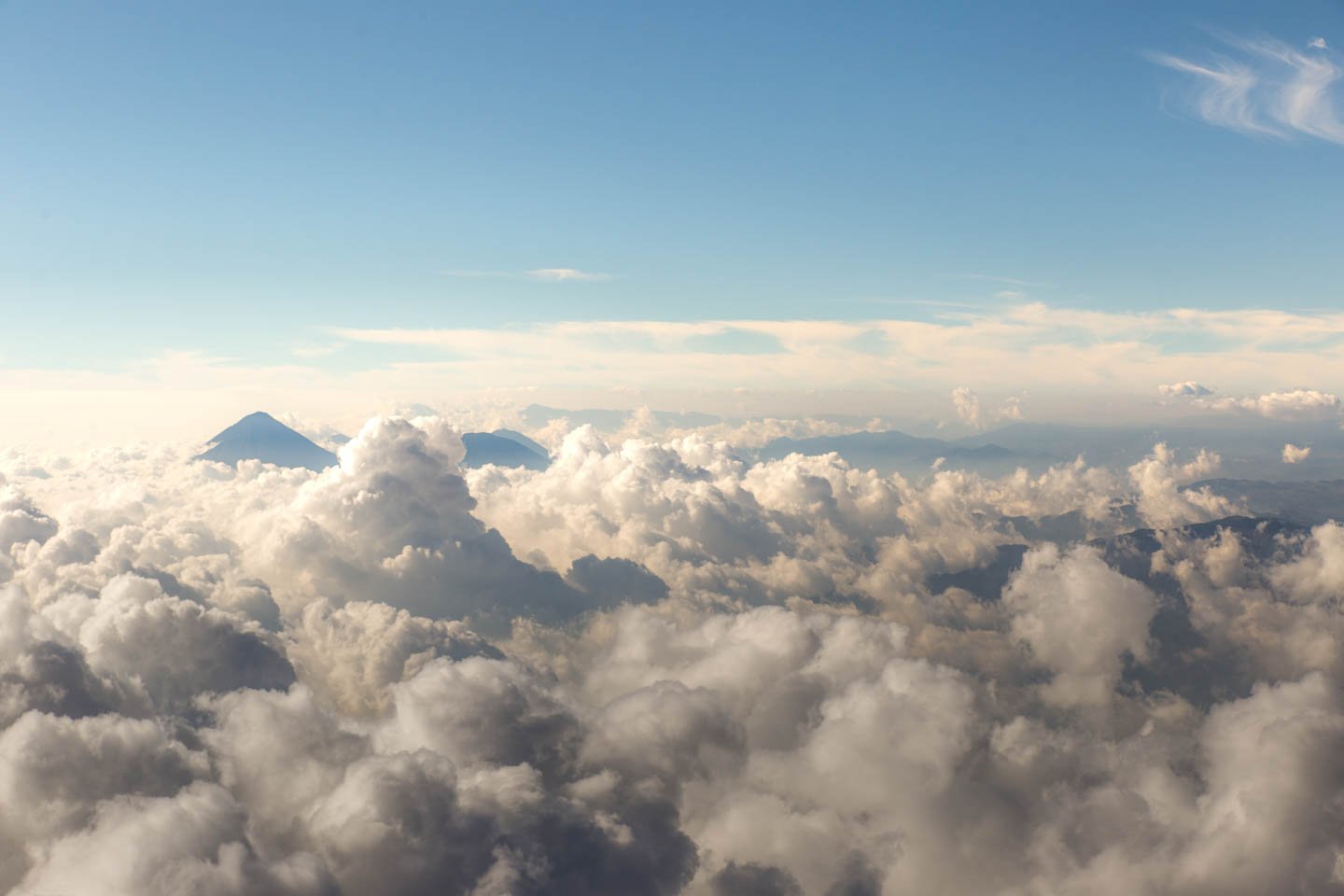 It cleared enough that the groups below would have a perfect view from their tents. 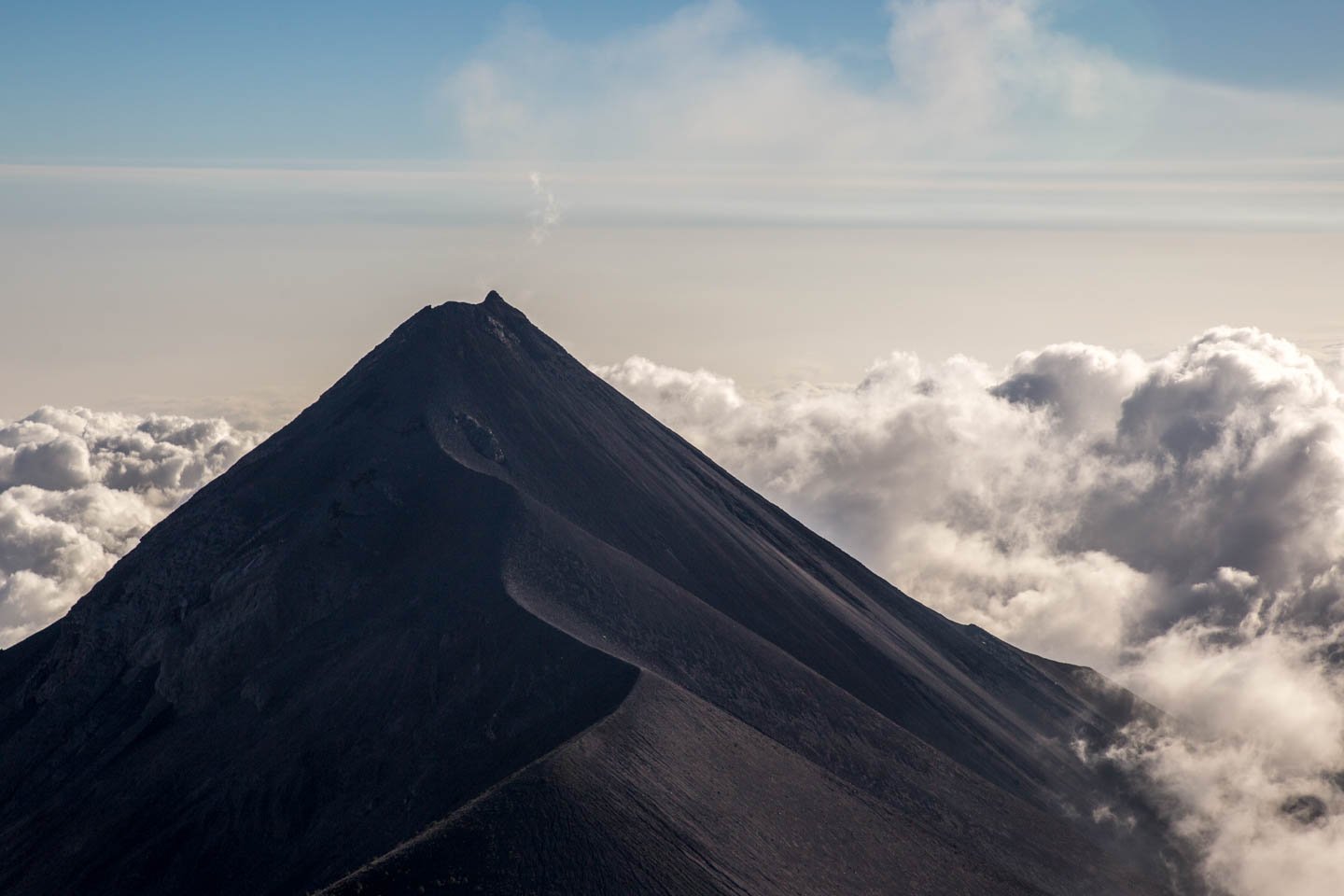 We preferred our vantage point. 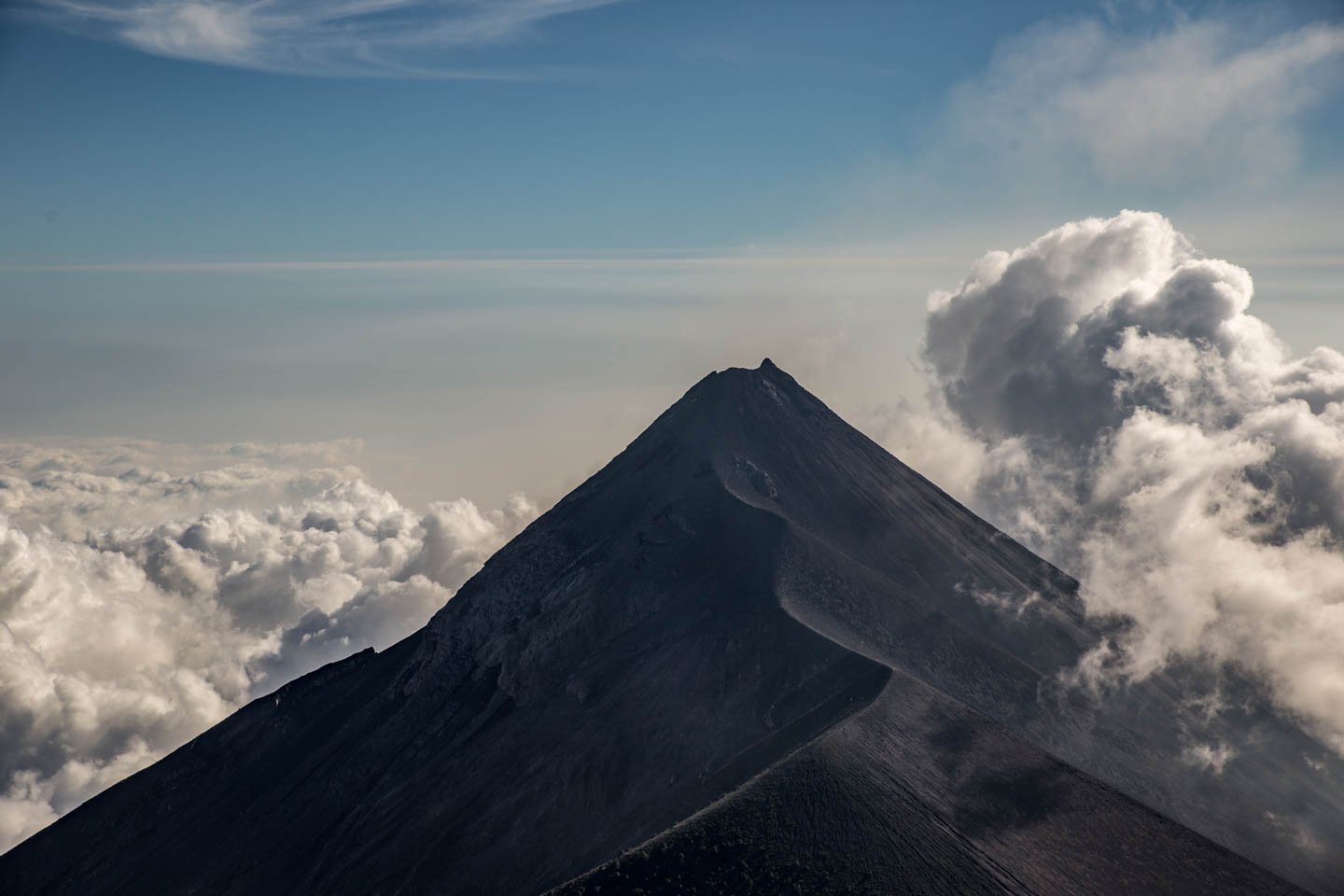 Just the two of us. On the summit of a towering volcano amid a swirling ocean of cloud.  Watching an awesome display of the raw power of Mother Nature unfold right in front of us. 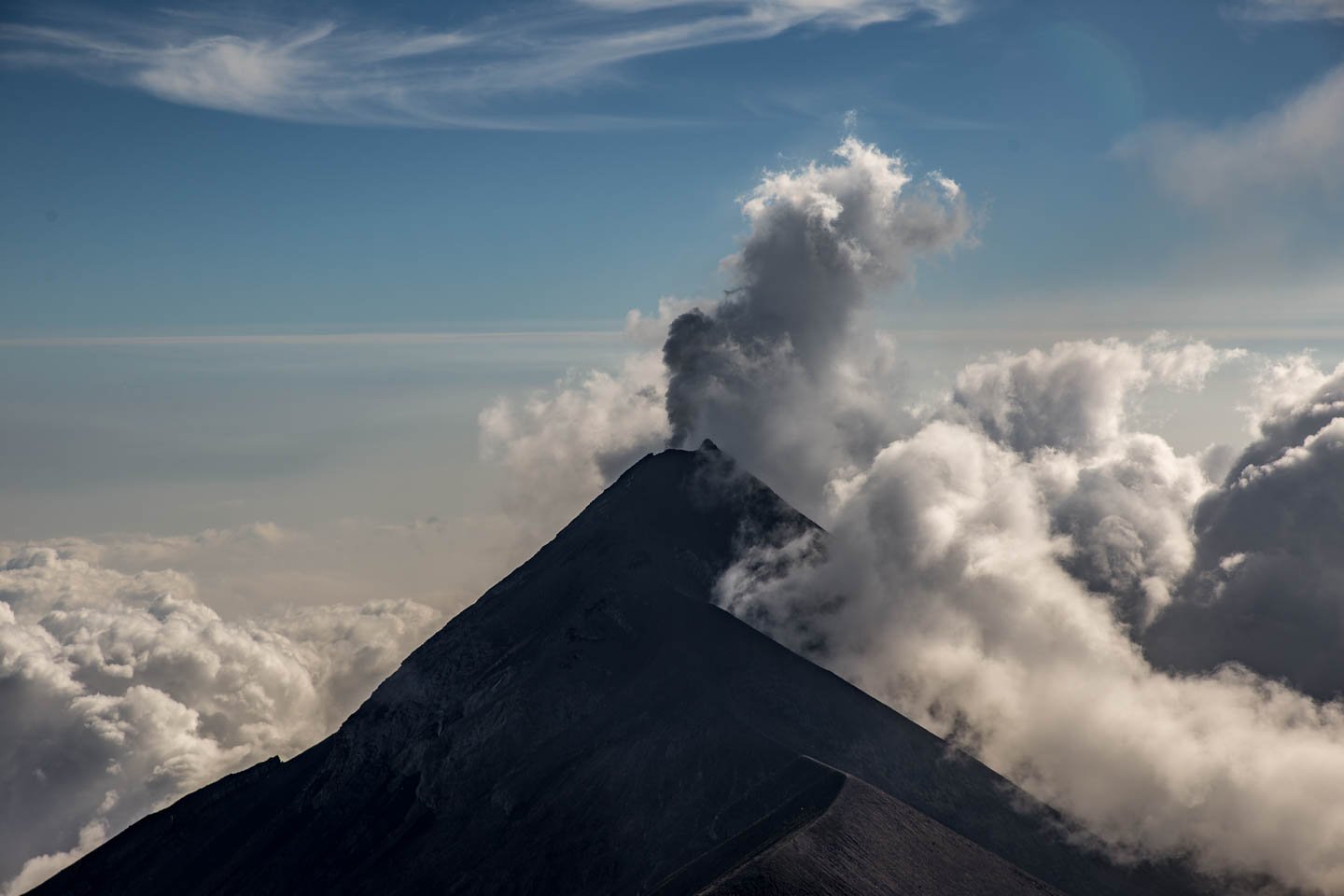 It felt like this show was just for us. Every few minutes Fuego would belch more steam. Sometimes ash. Enormous rocks were visible, bouncing down the slopes of the neighbouring volcano. We could feel, as much as hear the thunderous, echoing booms that accompanied each display. 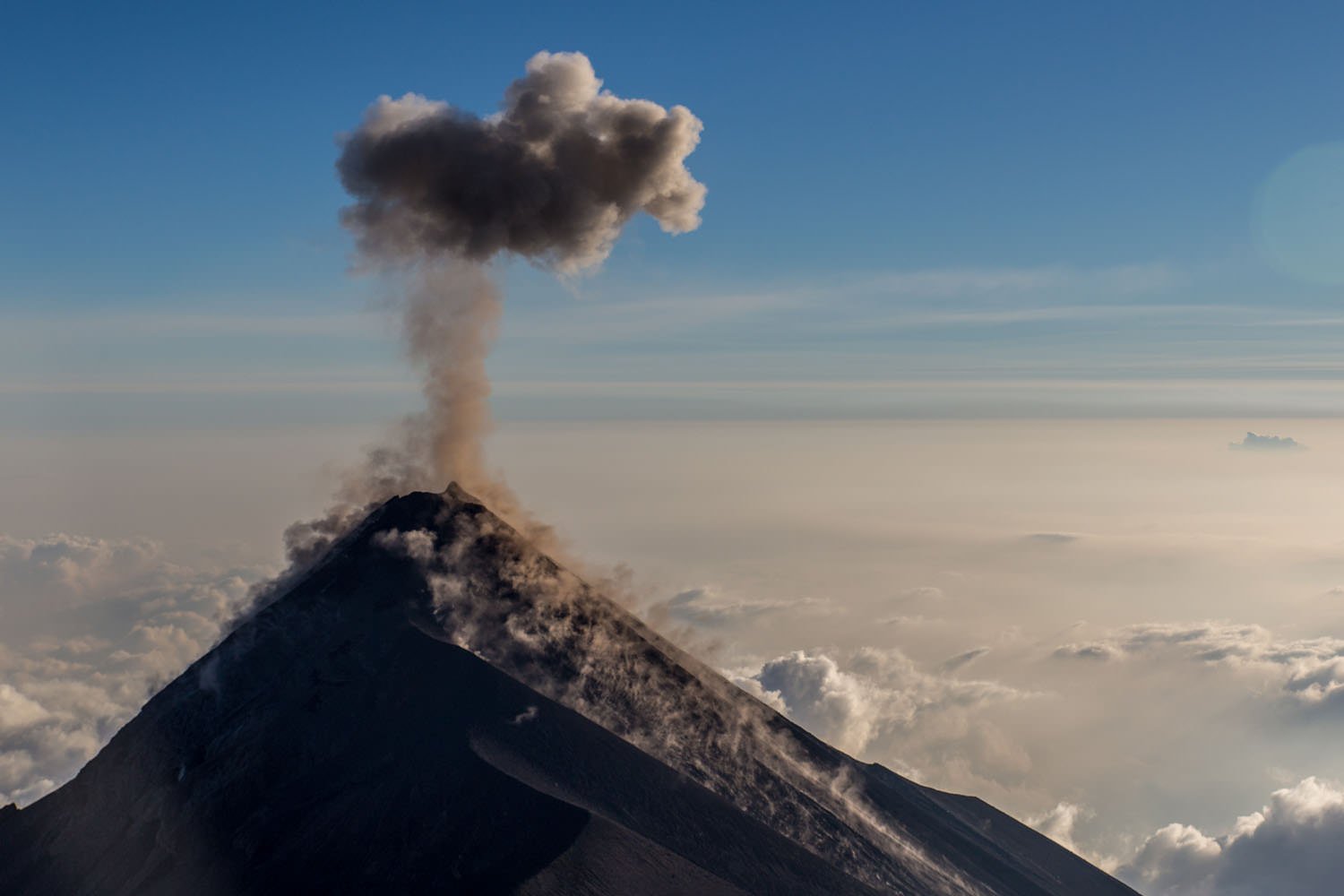 Evening arrived, the moving carpet of cloud began to glow all the colours of a majestic sunset. 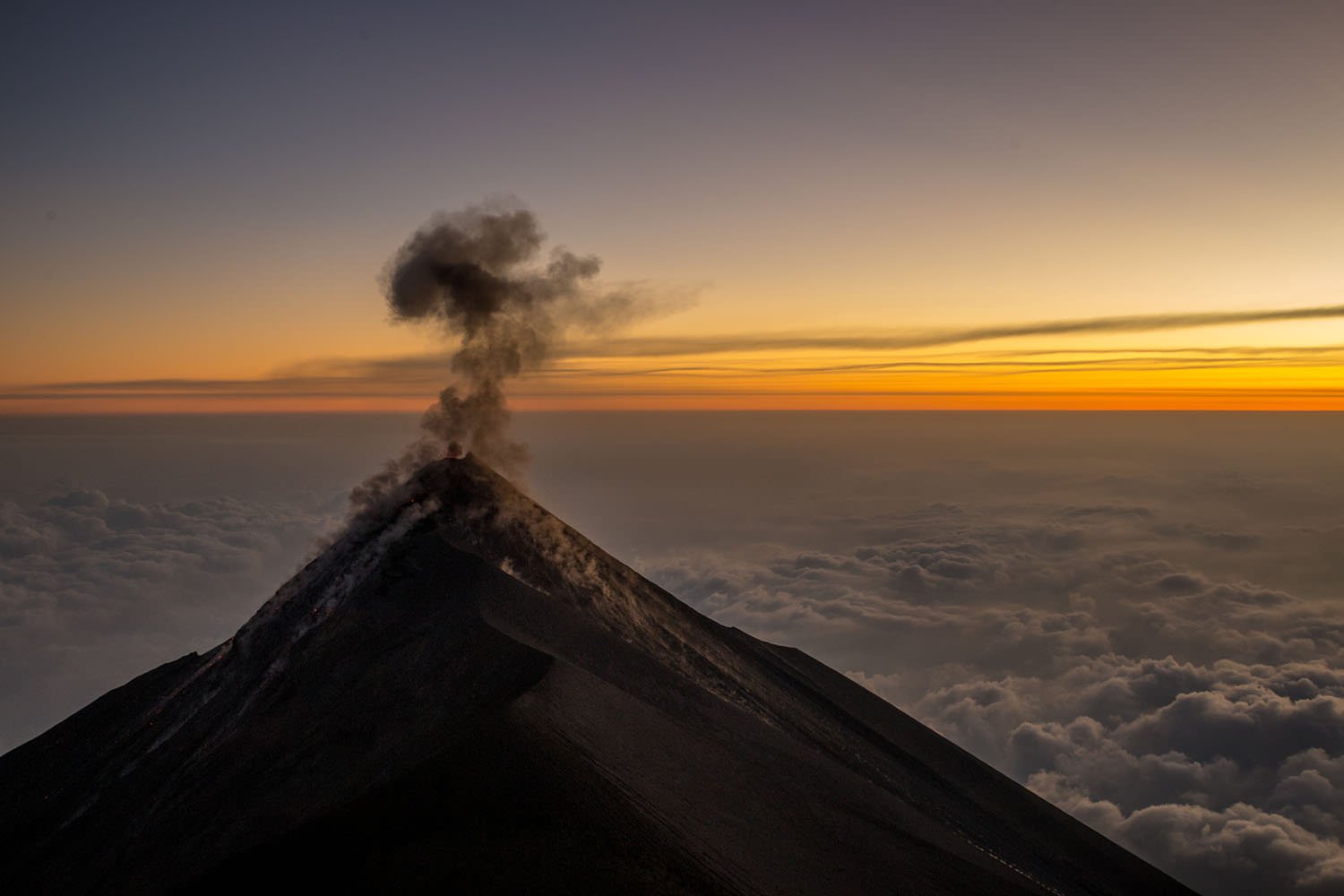 Stars twinkled behind the erupting Fuego. 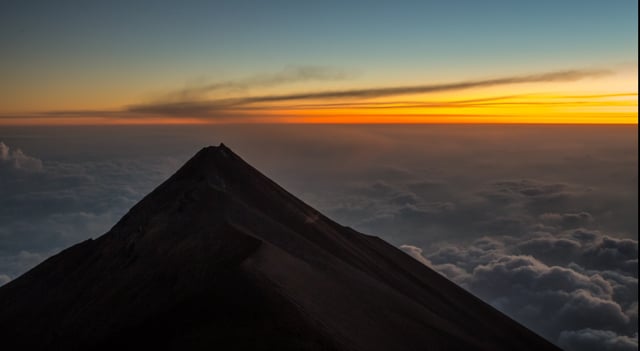 Against the night sky, the glowing fires bursting from deep within the earth became visible. Streaks of fire filled the air. 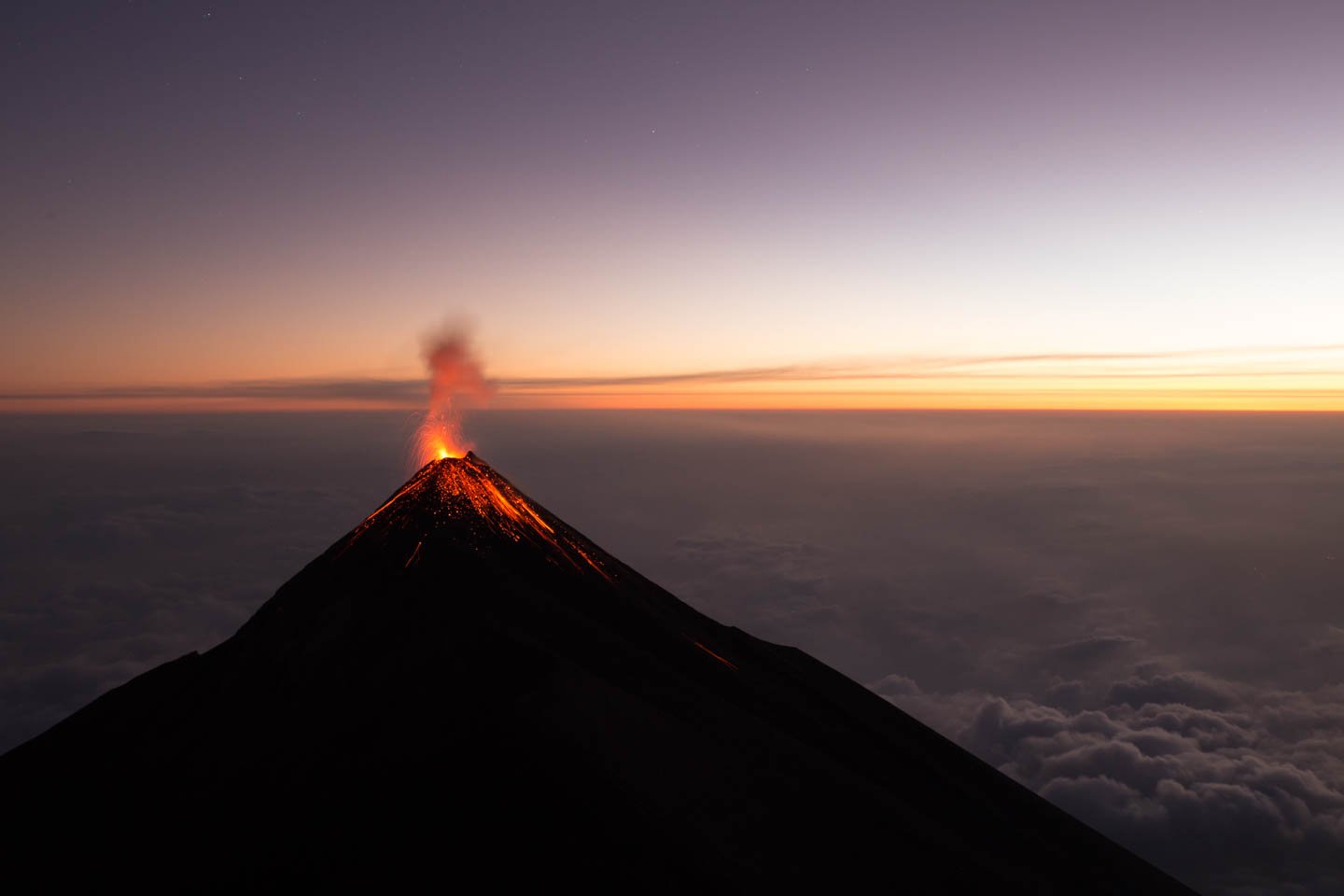 The volcano launched rocks and plumes of hot gas skyward. 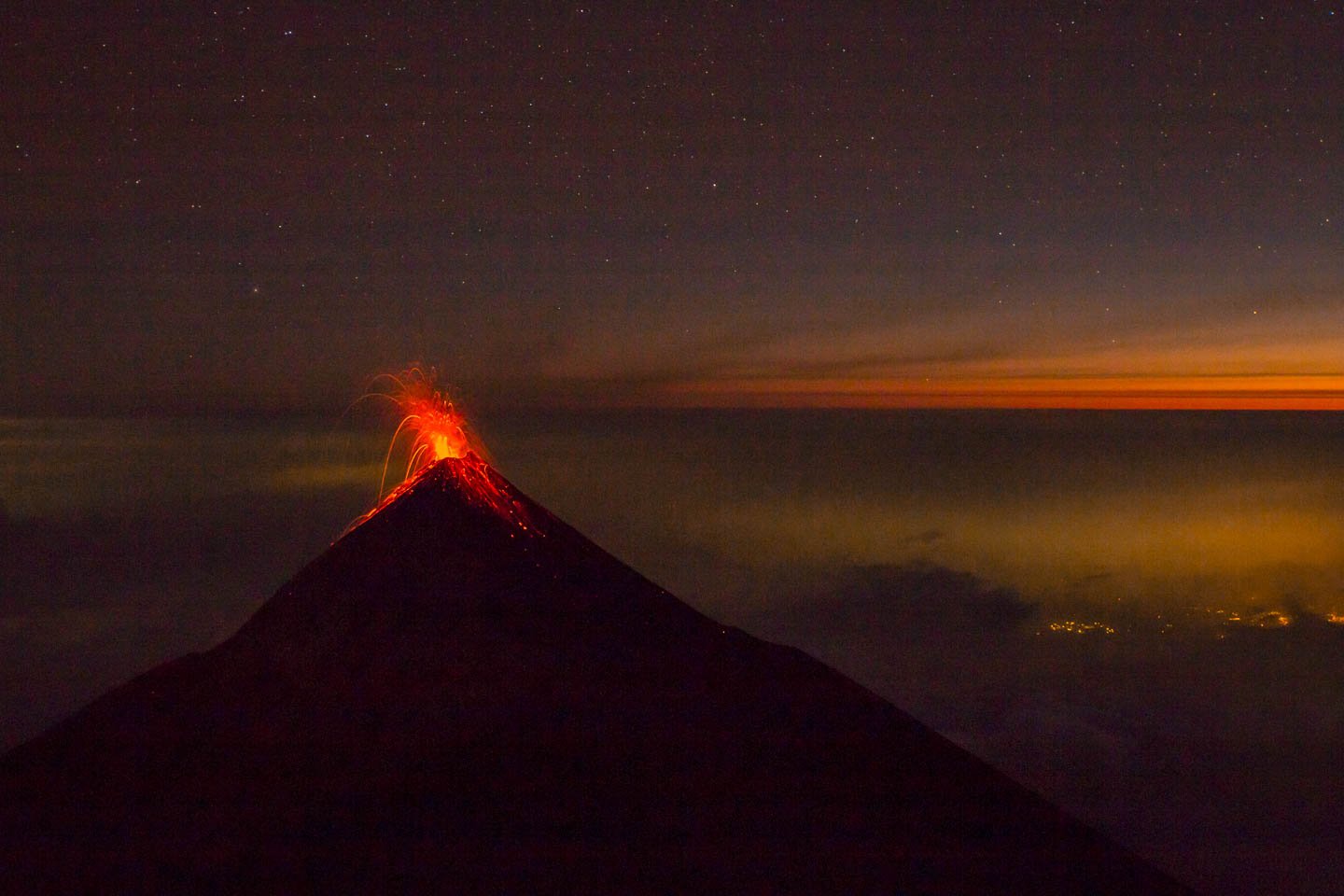 As the last light faded from the sky. Shivering in the chill night air, we abandoned our lonely perch on top of the world. 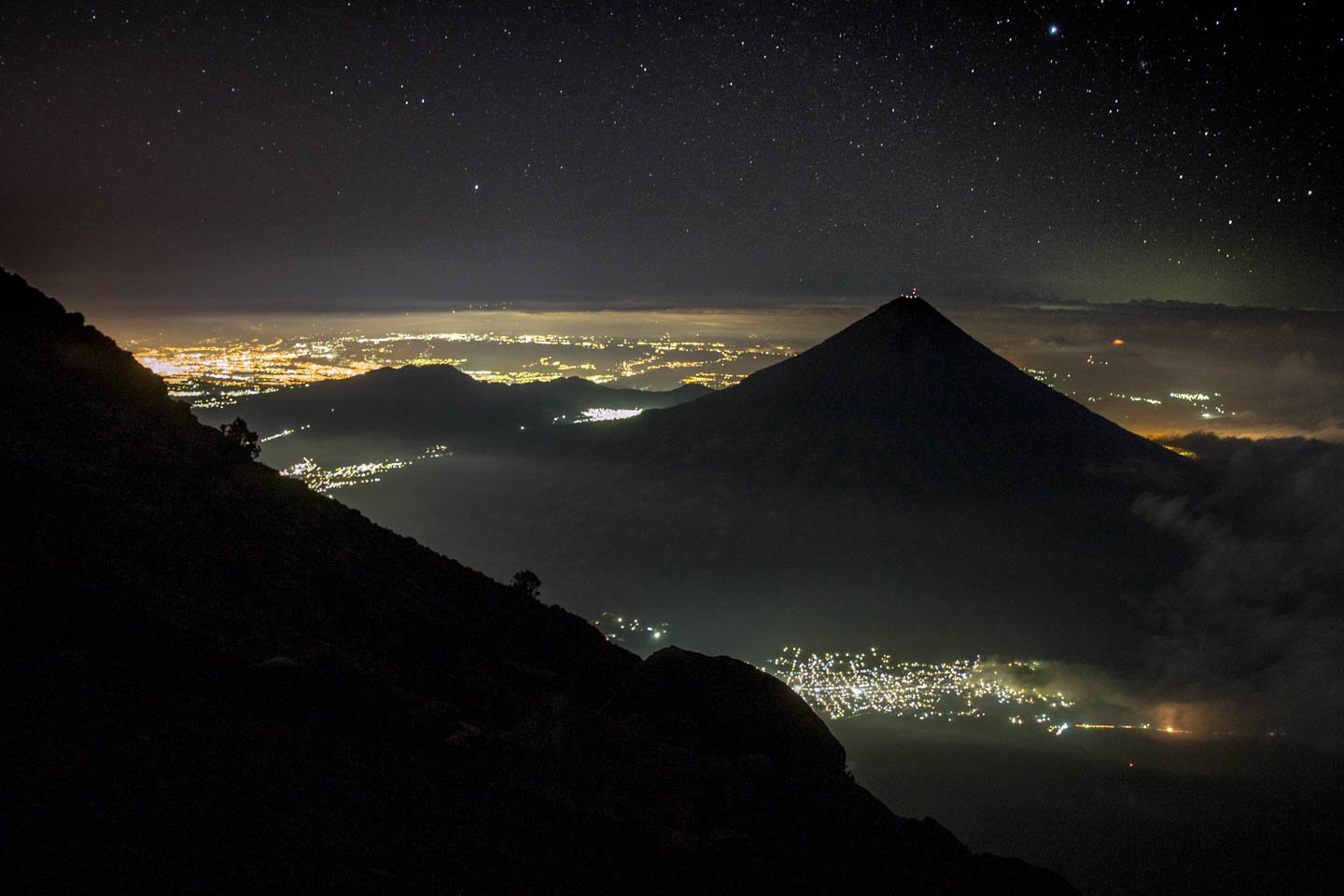 Heading back beneath the thick banks of cloud we soon lost sight of Fuego’s bursts of fury. But our short time on an island on top of the world will be etched in our memory forever.

Would we do it again? Without a doubt.