If at first you don’t succeed 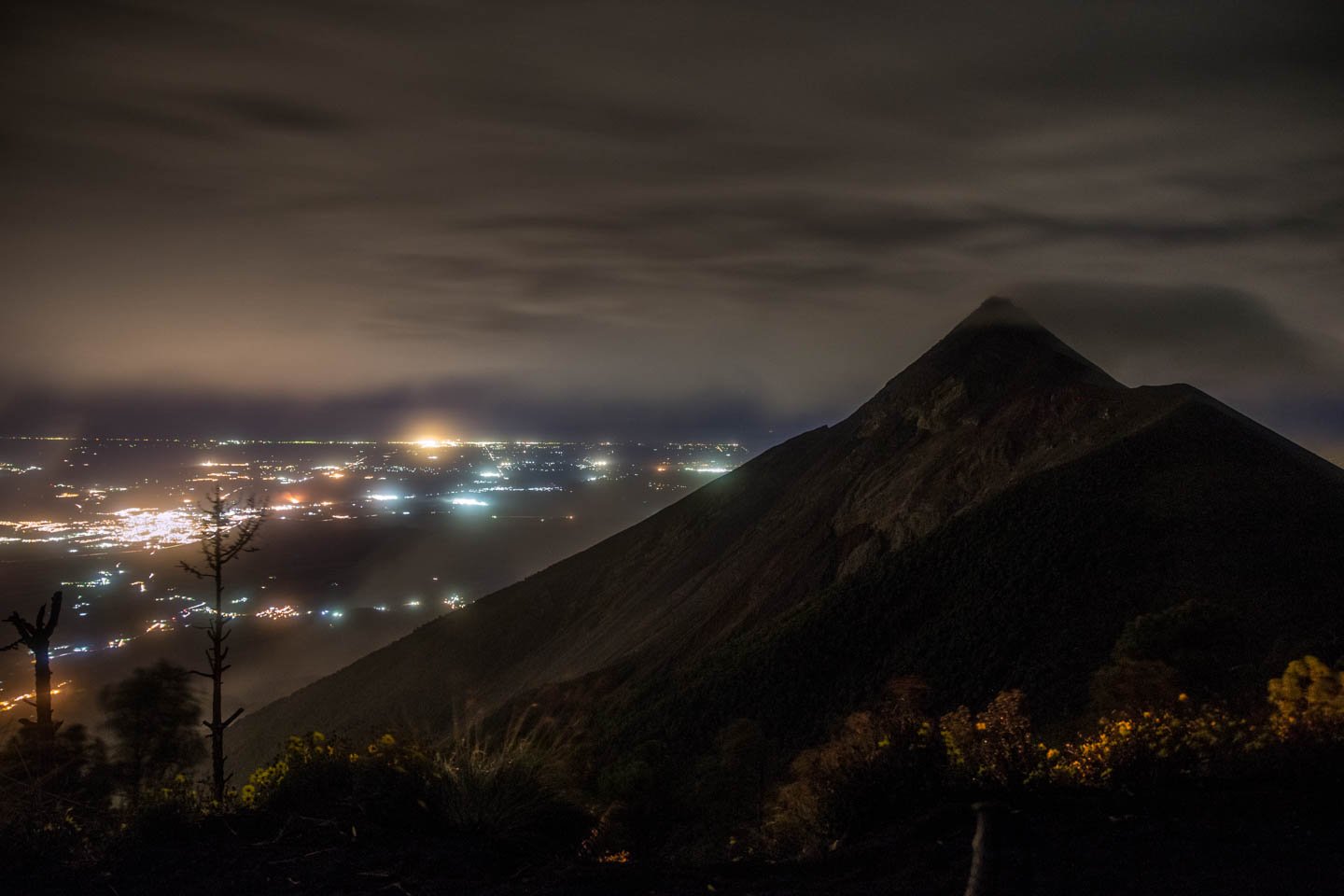 Shivering, huddling in the tent as the nylon fabric buffets aggressively in the wind. Nibbling on a slice of cold, plastic-tasting faux cheese. Waiting for the icy rain to subside.

Not exactly how I envisaged passing my birthday.

At an elevation just shy of 4000m, Acatenango is not the tallest volcano in Guatemala. Nor is it the most photogenic.

Tours leave the bright colonial streets of Antigua daily to climb the volcano. It isn’t an easy feat. People speak of the climb as if it were at once the best and worst thing they have ever done. Usually they describe it as something they would never do again.

The selling point? Acatenango’s highly active immediate neighbour—Fuego. A volcano belching steam, fire and ash, framed in the doorway of a tent. That definitive photo every backpacker wants in their Instagram feed.

At least. That is how the story should go.

After several bleak, cloudy weeks, the weather reports were improving.

After a successful day exploring the lava fields of Volcán Pacaya we made our way to Acatenango with high hopes of clear weather. 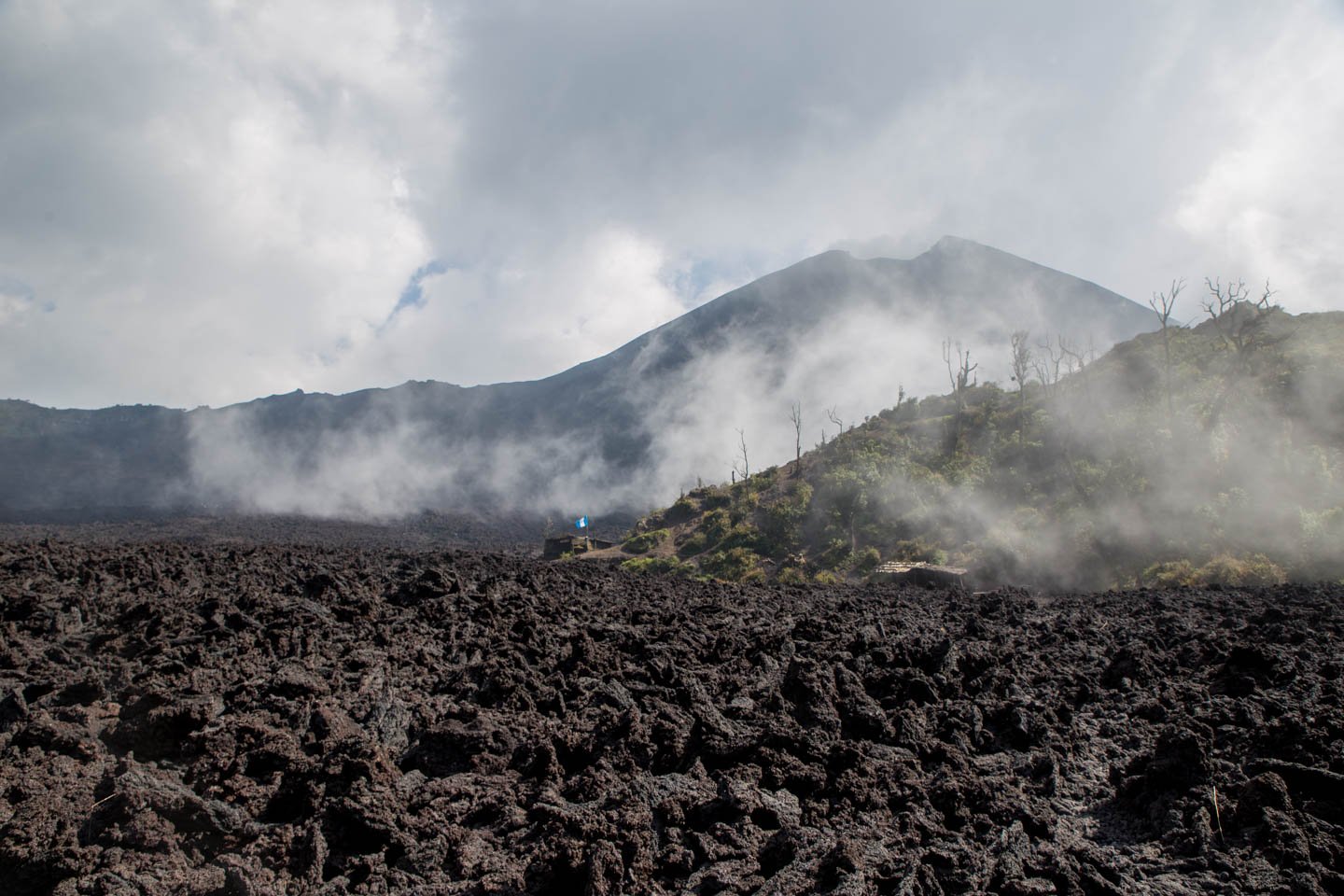 The sun appears as we explore the barren lava fields of Volcán Pacaya.

We didn’t do anything sensible like booking a tour. Our complete lack of planning found us parked at the foot of the volcano late one chilly evening. The sun was setting and we had no idea where we planned on staying. Luckily Juan, a friendly local, waved us over and invited us to camp outside his family home. He also arranged for a guide to see us on our way the next morning.

The morning dawned, bleak and grey. 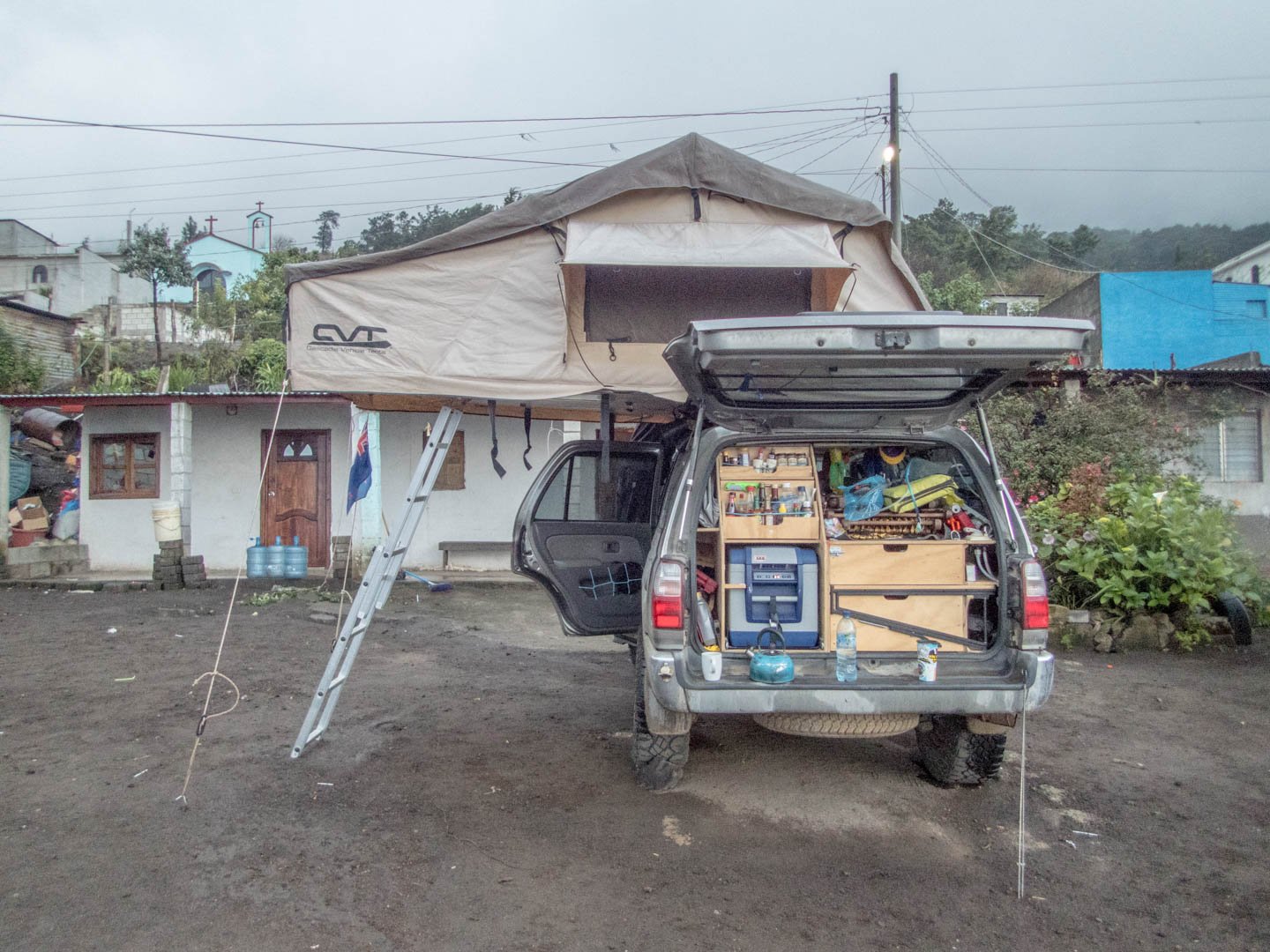 The only ray of sunlight was our cheerful guide, Sixto and his energetic dog, Nico. Sixto was positive the skies would clear for a view of Fuego. 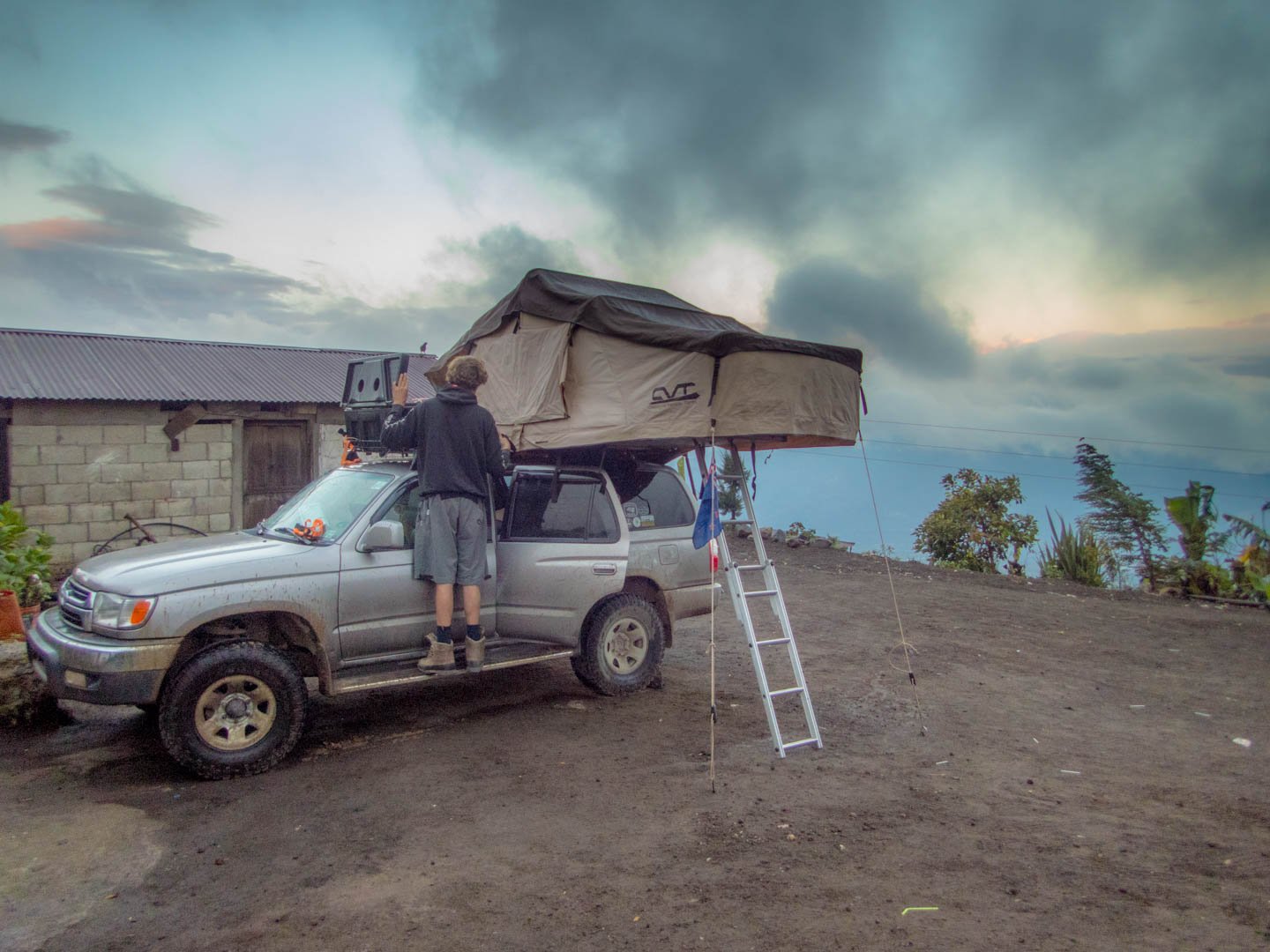 The clear skies in the other direction had us hopeful that Sixto’s optimism was not misplaced.

It was a cold, miserable trudge up the steep, muddy paths of Acatenango. The moody forest possessed just enough atmospheric beauty to keep us from complete despair.

There was even a moment when the sun peeked through. 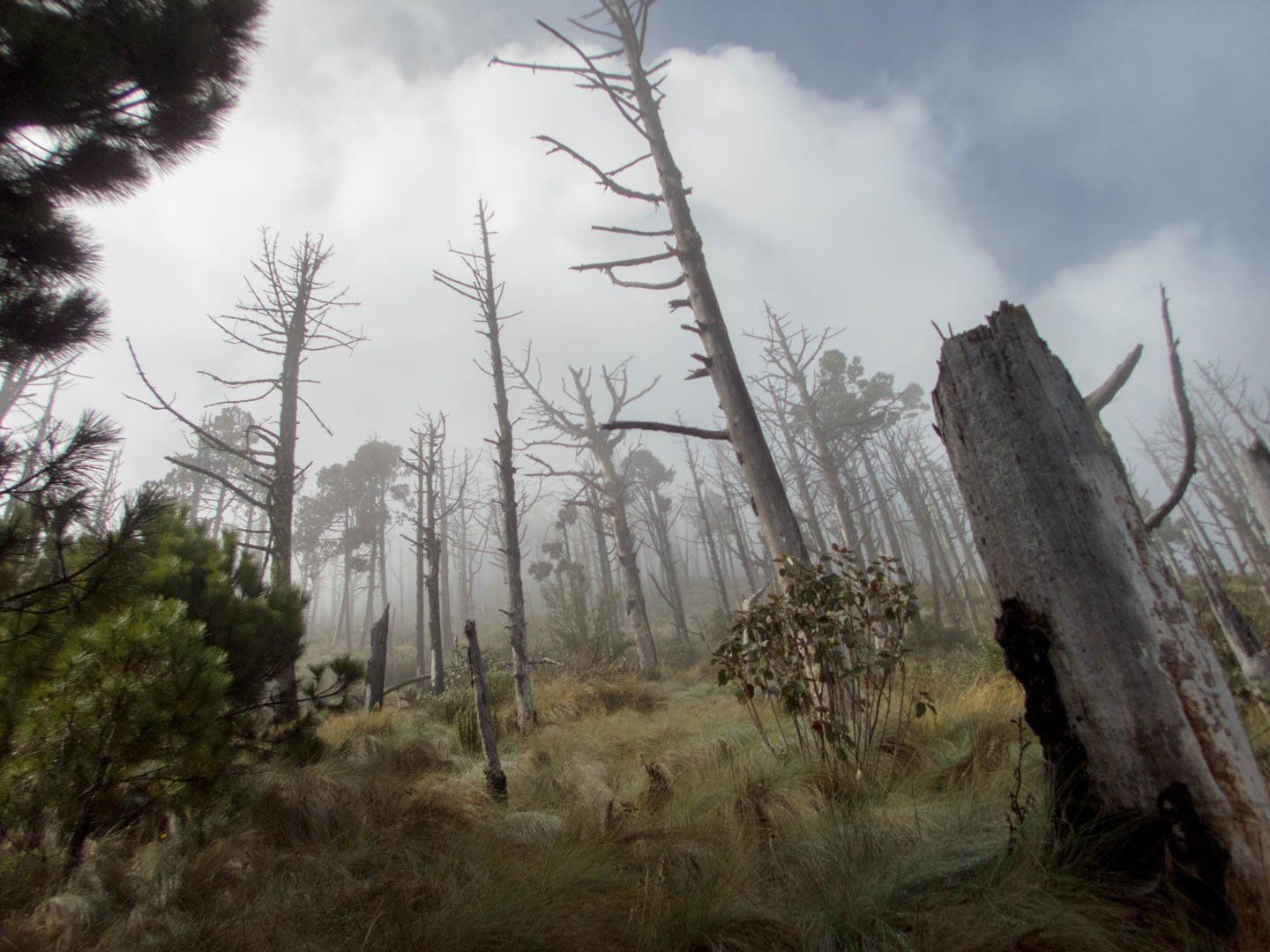 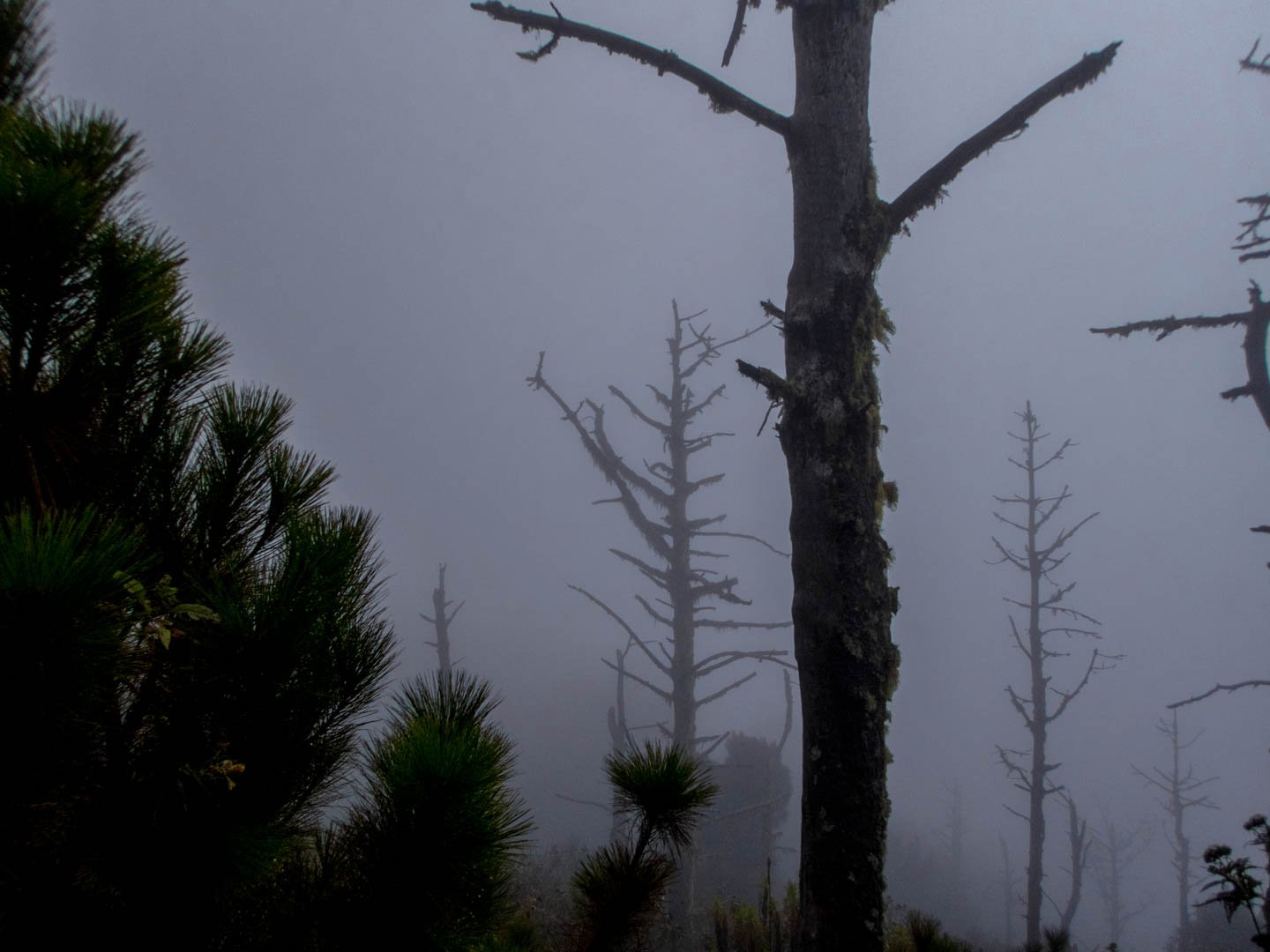 Our initial plan had been to camp higher up the mountain. In light of the rubbish weather and slow, muddy trudge this no longer seemed wise. Sixto suggested we walk around the mountain to one of the main tour camp sites instead.

Less uphill and a better view of Fuego. Sounds like a plan!

We soon arrived at the camp site, and pitched our tent in prime position. We were ready for a volcanic display of epic proportions.

The wind stopped howling just enough to briefly hear Fuego bellowing behind a dense wall of cloud. This was going to be the most spectacular birthday ever.

At least we had our tent to hide in and avoid the weather.

When you know your tent pegs are somewhere, but that somewhere is not in the bag with the tent. 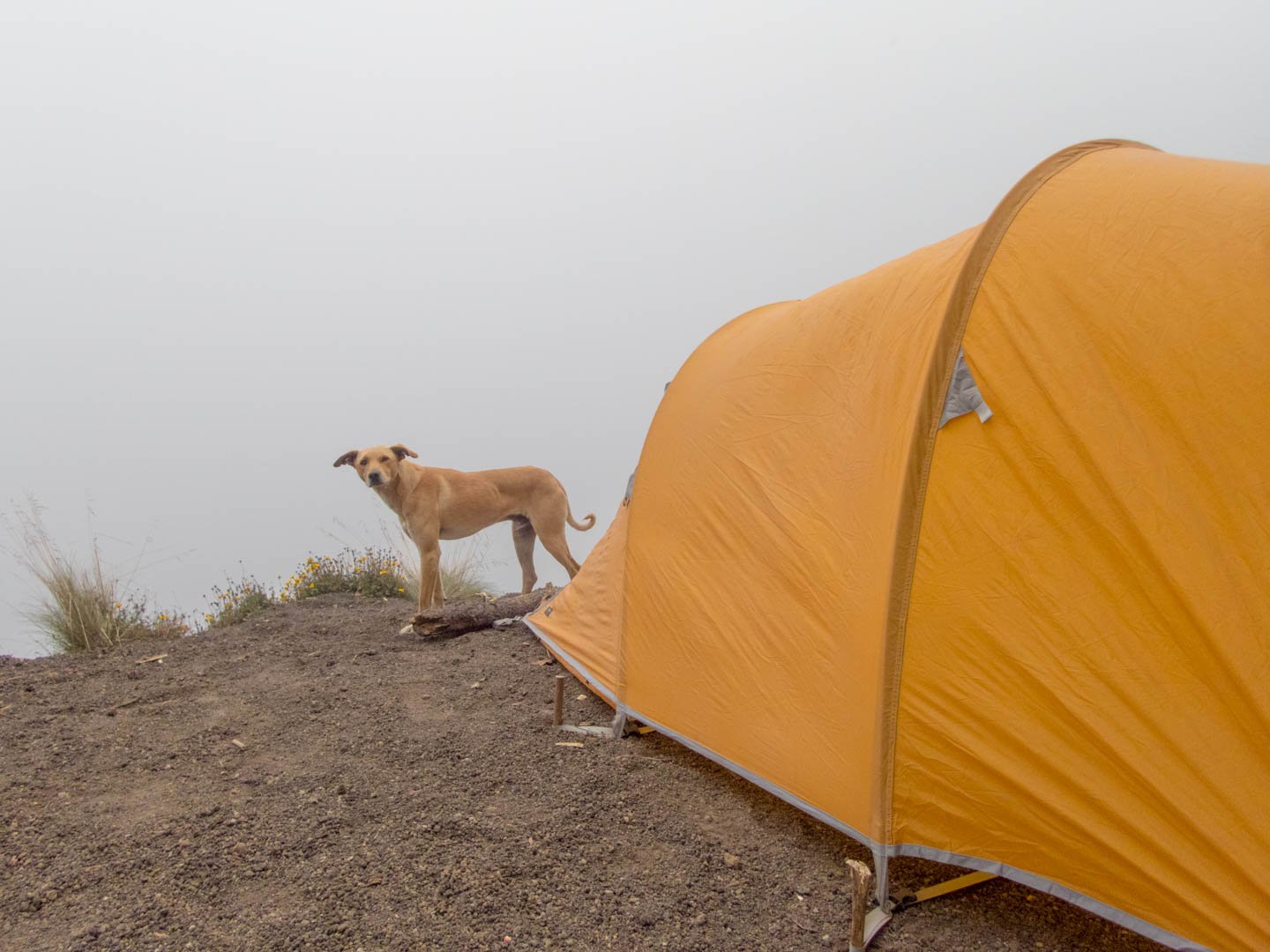 At the campground we waved goodbye to Sixto and Nico and began a hopeless vigil. 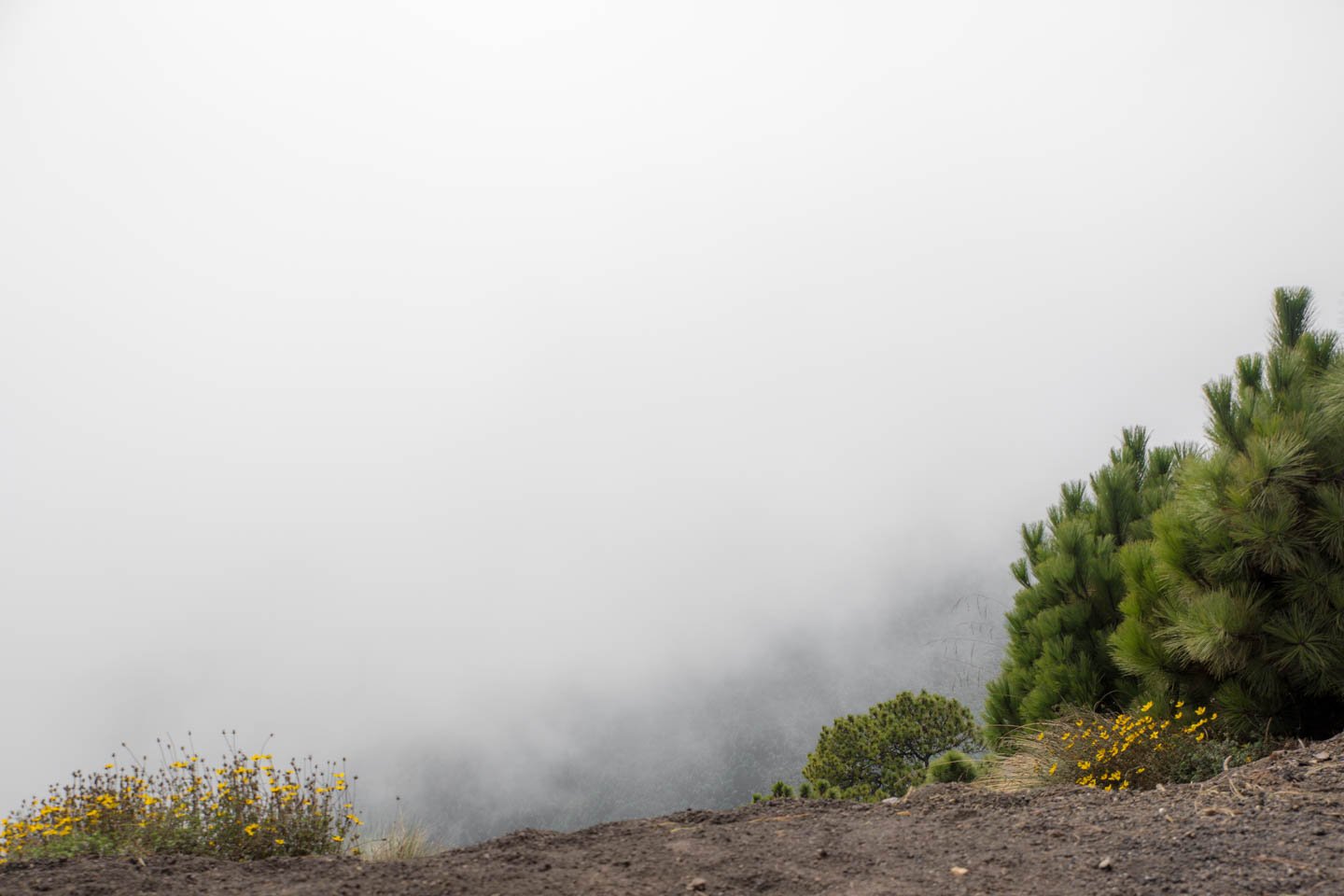 We sat with our eyes glued to the white abyss that stretched in front of us. We peered, full of hope, in the direction that Sixto had pointed. He had said: “Fuego is that way, when the cloud clears you will be able to see it from your tent.”

“Happy Birthday.” Ben joked, as we celebrated with ice cold ham and cheese sandwiches. The quiet patter of rain on the tent now drowned out by the howling of the wind and the cracking of branches. As the storm raged outside, we lamented our choice to forgo packing a thermos of hot soup. Instead, our tent was full of heavy camera gear that we weren’t going to need.

Then the clouds cleared. 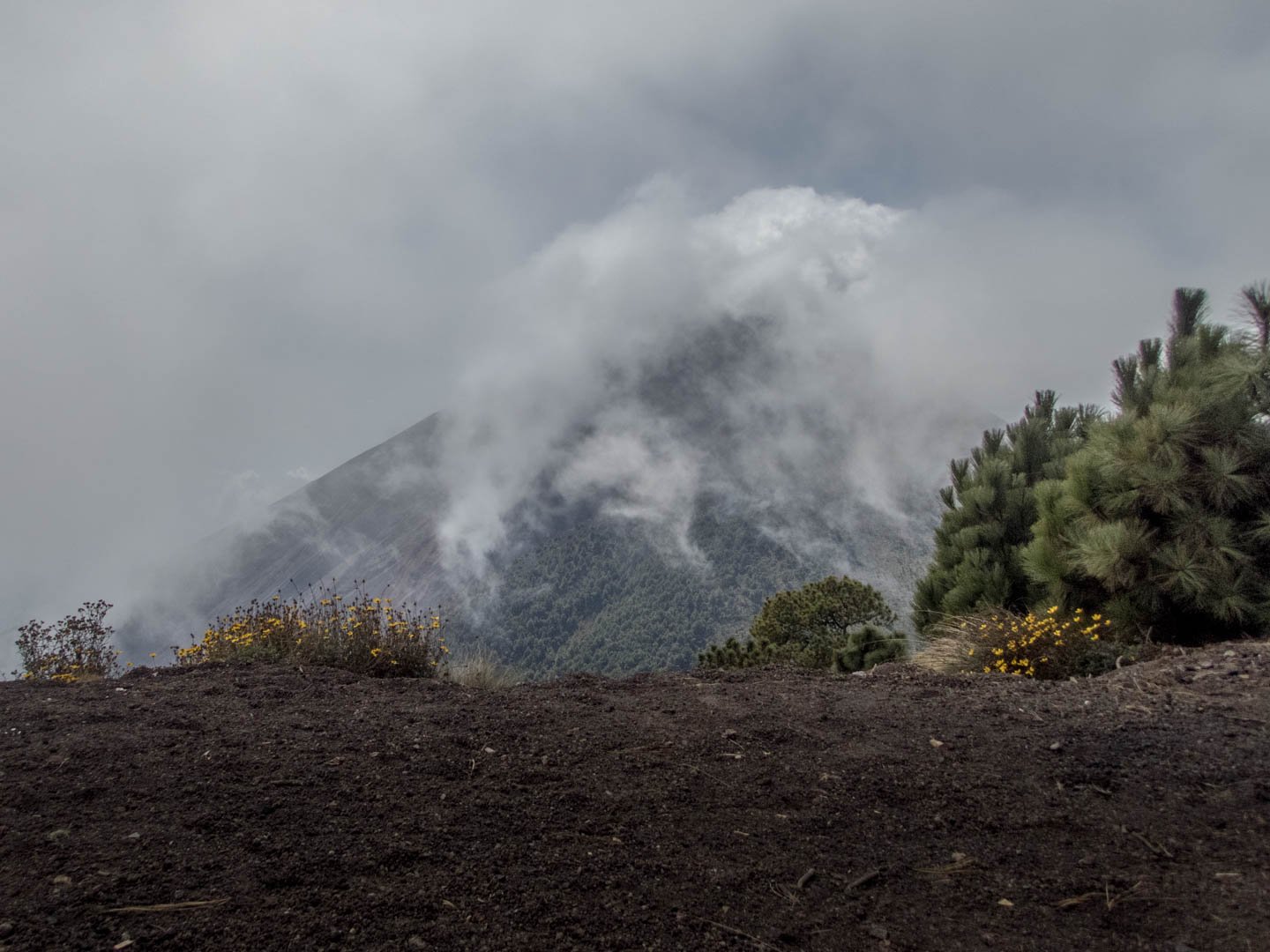 That was it though.

A brief, less than 30 second glimpse of the neighbouring volcano. Then back to regular broadcasting: 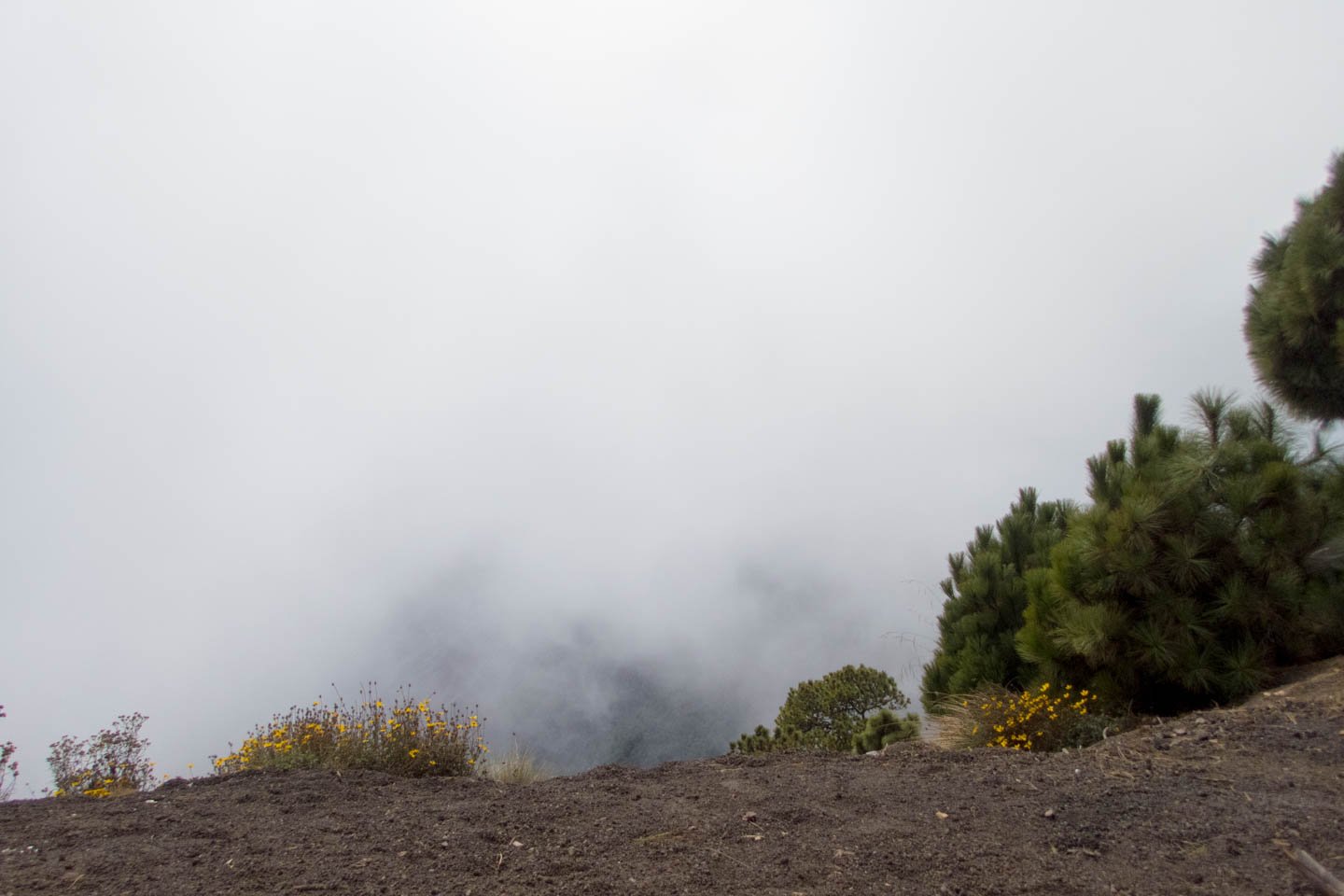 A cold night in the tent followed. The wind relentlessly buffeted the nylon walls. The cracking sound of crumbling pine forest was occasionally audible over the howling wind. 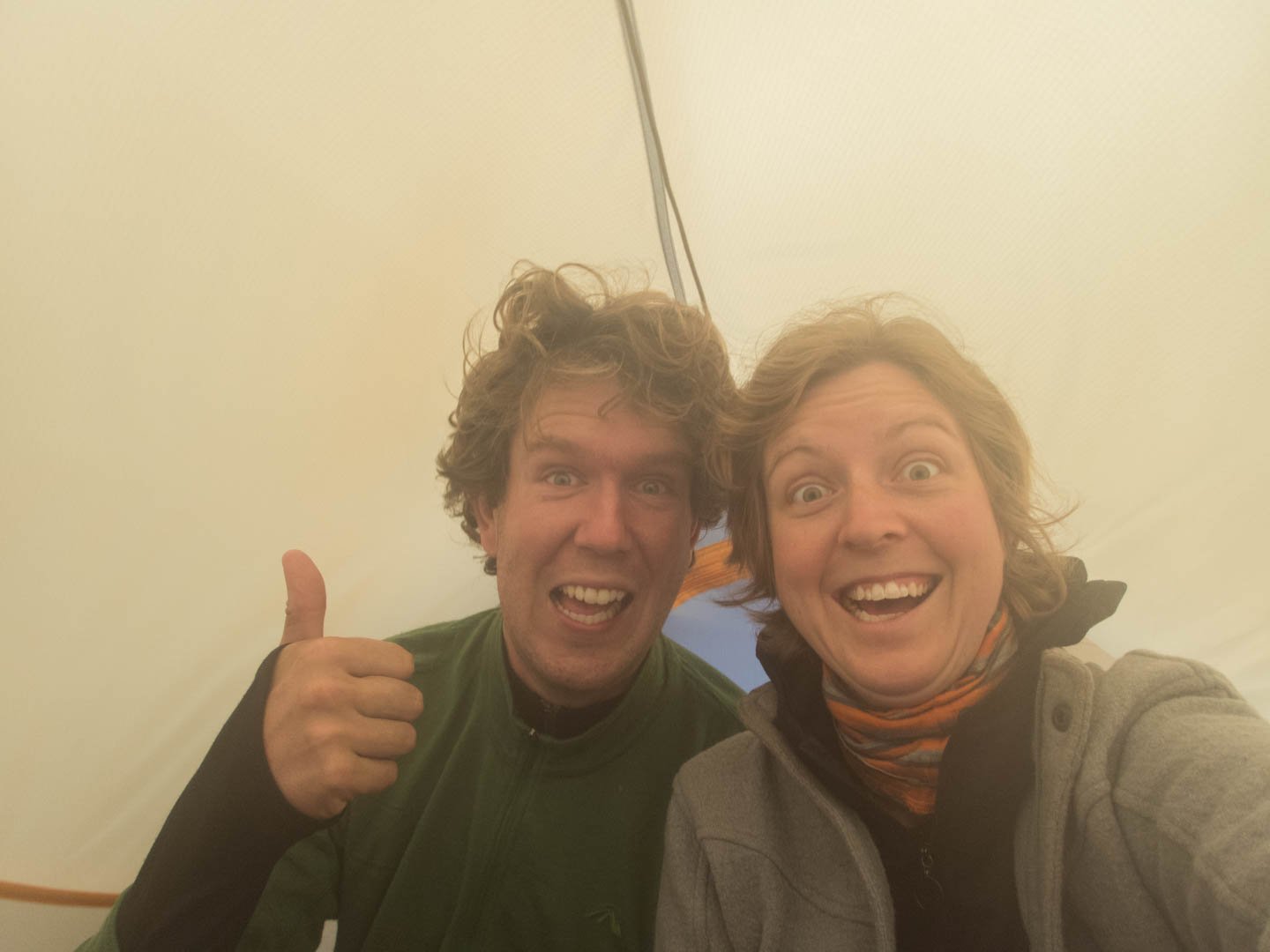 Yay. This was a fun outing. Let’s do this again soon.

Not the volcano though. We didn’t hear that again.

All this bad weather didn’t stop us waking up every hour and checking to see if the weather was improving.

Most times it wasn’t.

Then in the early hours of the morning we stuck our heads out of the tent into the icy midnight air to a glimmer of light below. Over the next few minutes that glimmer became a full-blown midnight volcanic vista.

It only lasted like this for a few minutes. As quickly as it had appeared it was gone. The mysterious Volcán Fuego was again enveloped in an impenetrable shroud of icy cloud. But for those few minutes we saw the view we had been dreaming of for months.

Well, sort of. Fuego didn’t really seem to be erupting at the time just a little puff of smoke… or was that cloud? But we felt hopeful that the morning the cloud would clear and we would be privileged enough to enjoy the volcanic show from the summit of Acatenango.

We awoke early, to the sound of tour groups packing up hastily. But they weren’t packing to walk to the top. They were heading down—fast. The weather had become dangerous. There was no volcano to be seen. No one was climbing to the summit of Acatenango today. 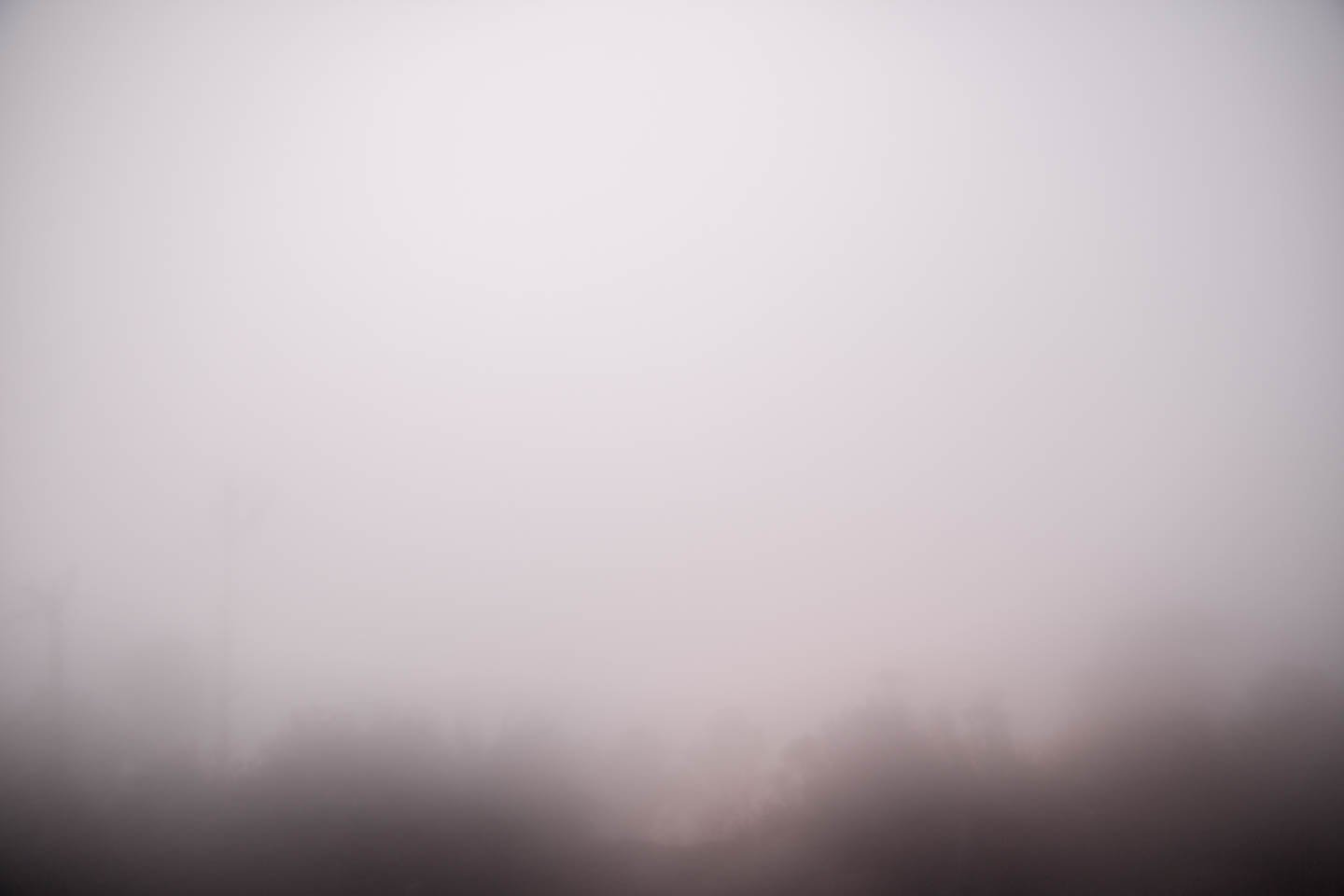 Instead of summiting Acatenango, we made our way back down, filled with bitter disappointment. Half a world away from home, we had waited weeks and…nothing. We picked our way though fallen branches, swirling mist and sleety rain. Defeated.

Many would declare this a terrible experience. They would head for the coast to find a bar that serves ice cold beers. Put their feet up in a hammock and…

Oh…wait, that’s exactly what we did.