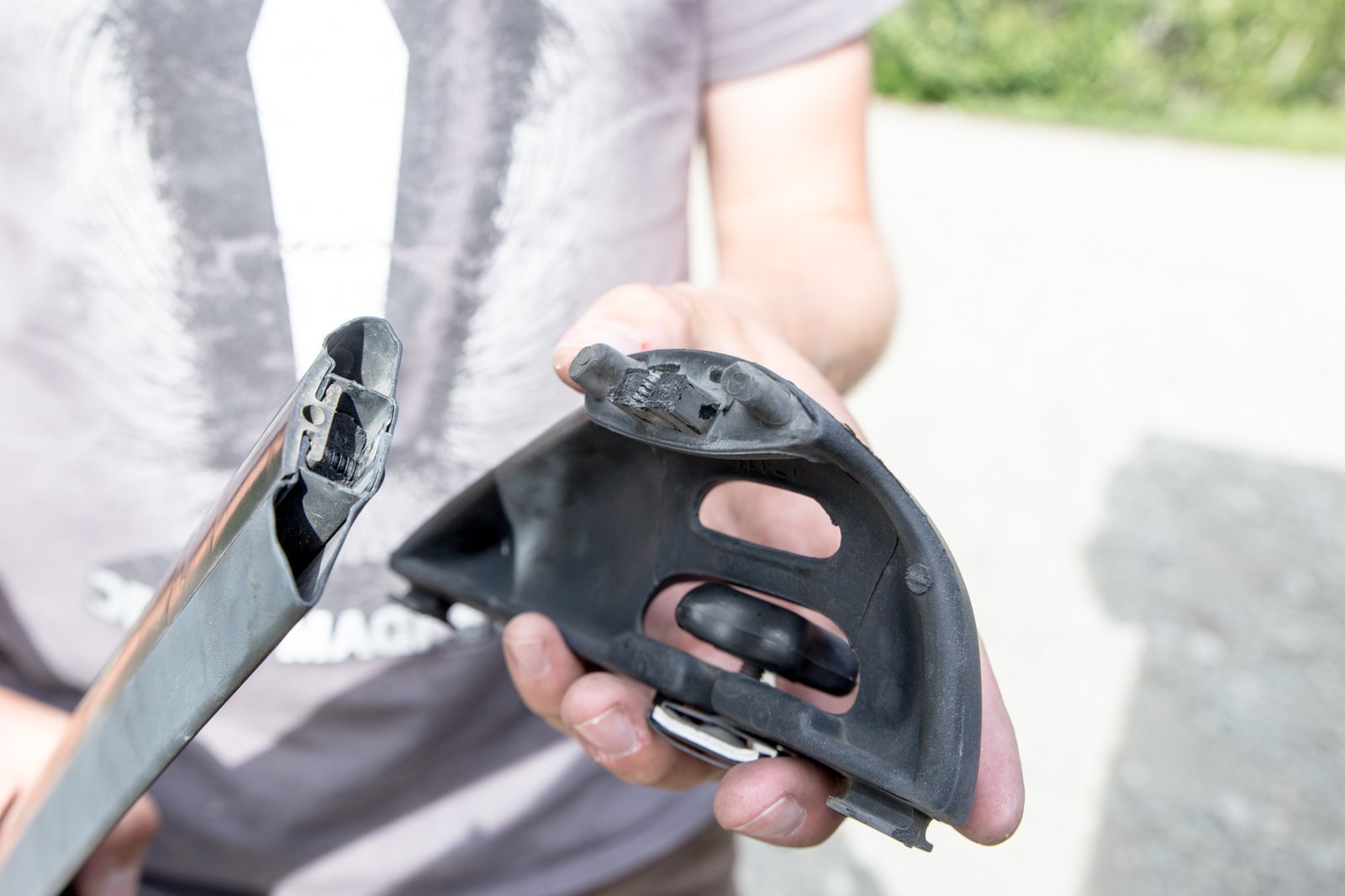 It was about six the morning of the third night in our roof top tent when we heard the first loud pop, which was followed about 15 minutes later by second loud pop but this time it was accompanied by the tent shaking … oh dear.

Half asleep we stumbled out of the tent, conducted a quick inspection to find that the factory roof rack had collapsed … on Emma’s side [Edit: Ben lies, it was clearly his side that collapsed first, I had not eaten that many pecan sticky buns], which then put too much strain on my side which collapsed second. Back to Anchorage. 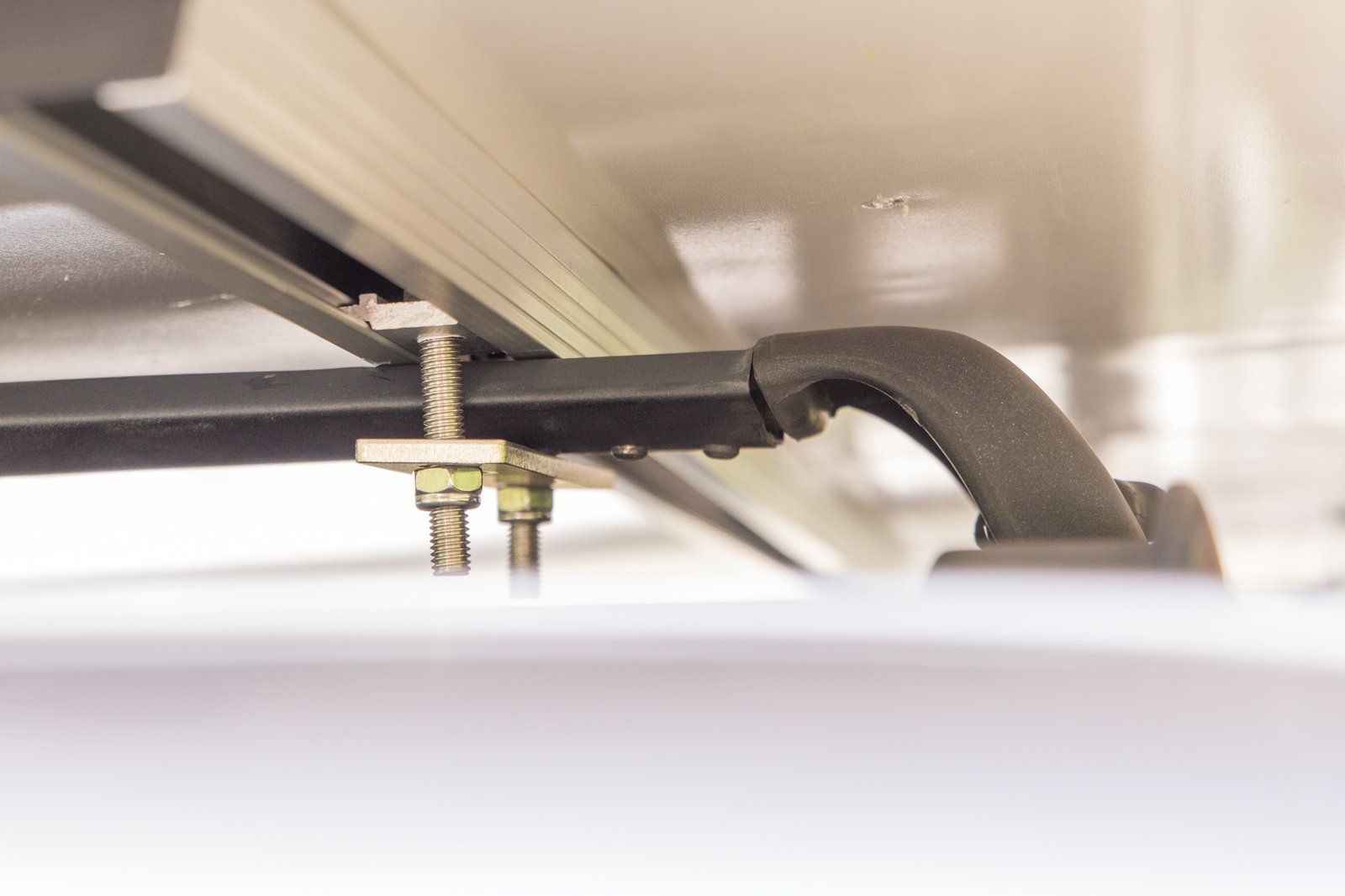 Fortunately, I had spotted a Thule rack on 4Runner being dismantled a few days earlier at the workshop where we were having our suspension work done.
While we waited for the workshop to open we decided to price up a new setup from the local REI store. A new Thule system which consisted of the bars, a foot kit and a fitting kit would cost a little under $400. That’s a little pricey! We priced up a Yakima system which was even more expensive. It was apparent that buying new was not the preferred option. We had a look on Craigslist, nothing.

Buy this time the workshop had opened and I managed to get hold of Dan, the owner, who said that the Thule rack was owned by one of his workers who would sell it to us for $60 … but, of course, the keys to unlock the covers to get to the bolts was long gone.

Luckily the lock code is stamped on each barrel, Dan sent a picture through for us, unluckily it was a really old barrel and no one had a replacement key. We could have overnighted a set of keys but 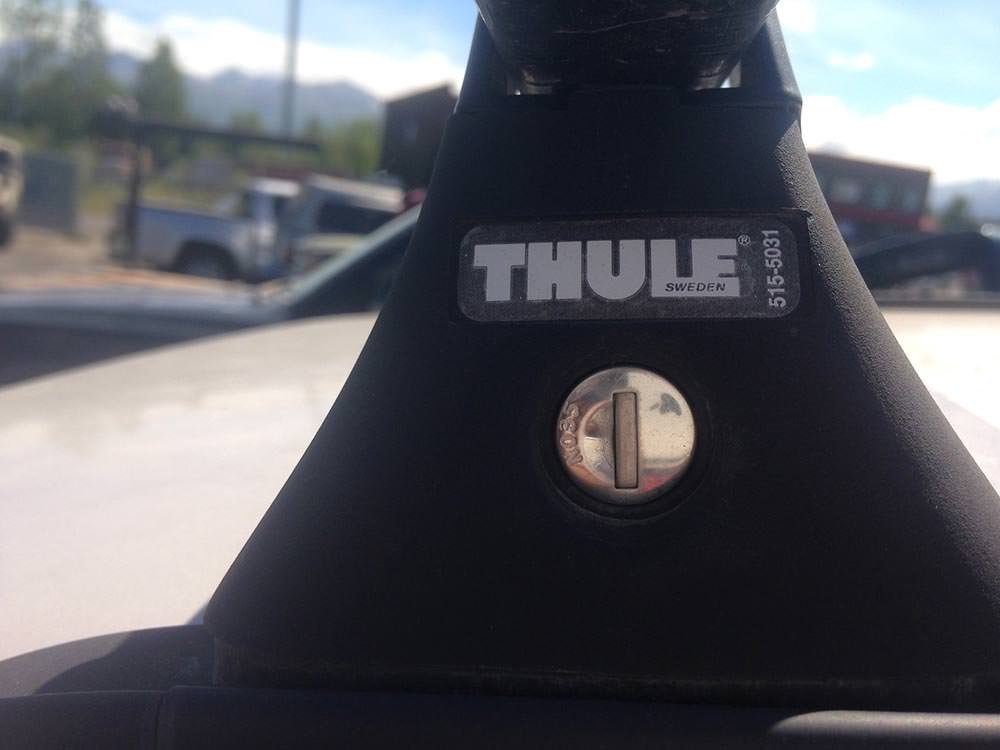 This was all we needed to get a key cut to open the locks … seems legit!

Dan had suggested calling out a locksmith which was a good idea but we didn’t want to wait for them to turn up, have them tell us they couldn’t do it for some reason and then have to pay for a call out fee. So we crossed our fingers Googled Anchorage locksmiths* and went to the first one that came up.

We rocked in and spoke to the first guy who struggled a little but ( we think he was new ) but the second guy knew what we wanted and had a key cut in no time. As we walked out with our new key it dawned on us how easy it was to get a key to unlock something that at this point we didn’t own… 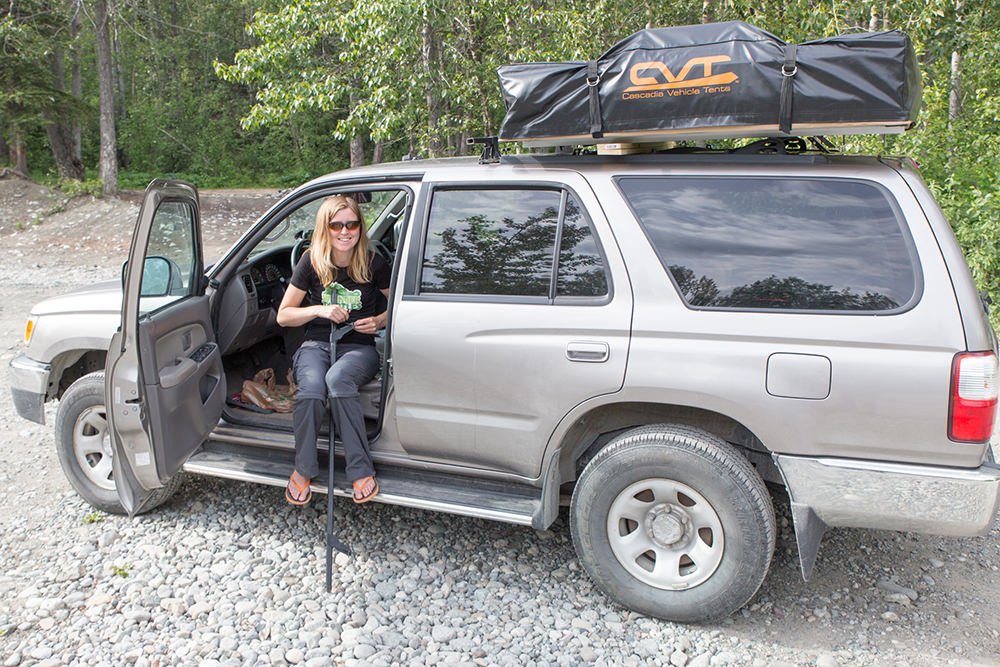 Swapping the racks out on the side of the road.

The locksmith had warned us it still may not work but it turned out to be spot on. In a few minutes we had the Thule rack off the old 4Runner and we were off to swap out our factory rack for the Thule one.

Removing the broken factory rack and replacing it took a couple of hours and turned out to be easy enough.

Factory rack. Not much holding these together.

Not sure I would trust these racks to carry anything after seeing the size and type of metal holding them together. However people have used them for years and swear by them. In all fairness they should have carried our weight according to the figures but who knows how much work they had done before us. 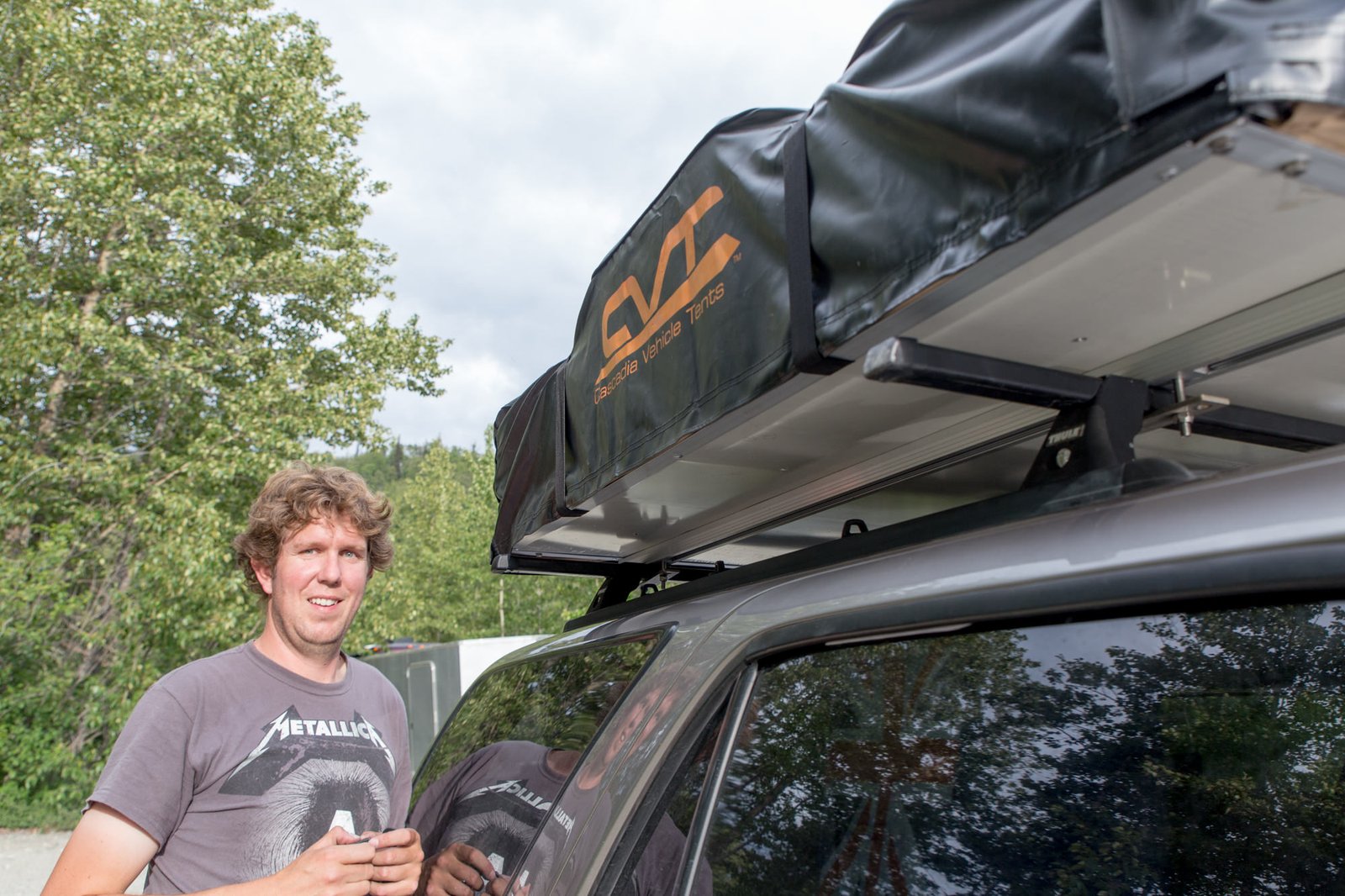 The operation was a complete success … and I got to buy more tools.

None of that matters now as we are sporting a new ( to us ), solid as a rock, roof rack that will do the job until the end of the trip … maybe.

After loading the 4runner up with all our gear, including the roof top tent, it became apparent the old factory suspension was not going to cut it … especially driving to the places we intend to go.

If you have owned a 4Runner/Surf for any length of time you’ll know the back end tends to sag over time, especially if it still has original shocks and springs. This being our second 4runner we already knew, even before it was loaded with gear, we would be upgrading the suspension.

Having recently ordered the Roof top tent from Ben at Overland Alaska we asked him if he could recommend a decent outfit that could do this for us. He gave us a couple of options but we decided to drop by Green Tree Fabrication and see what they could do for us. 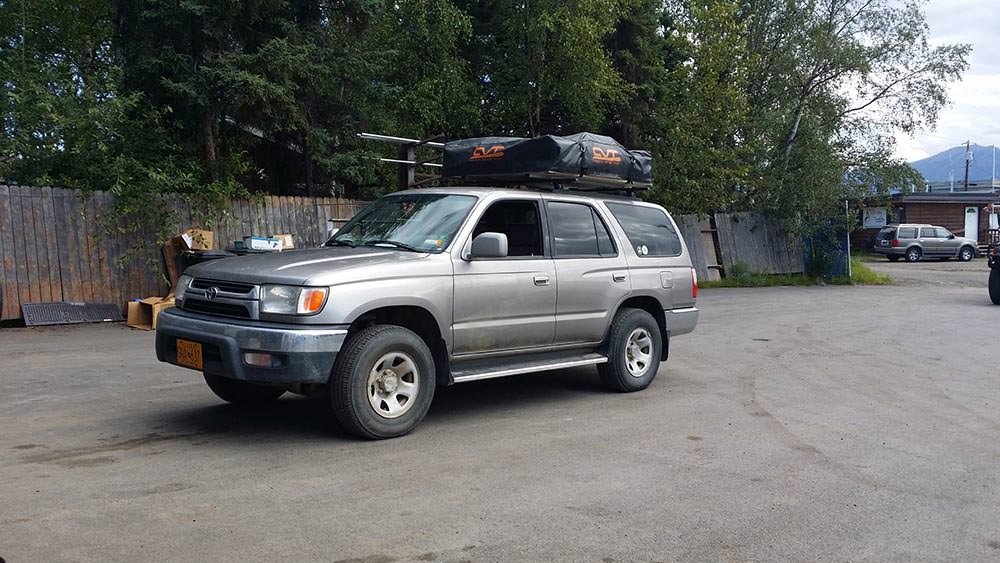 Old factory suspension. Looking low in the back.

We spoke with Dan, the owner, and decided on heavy suspension for the back and lighter option for the front since most of the weight we were adding was at the back.

He didn’t have the parts in stock so they ordered them and it was going to take 7-10 days to get up to Alaska which was enough time for us to drive up to Prudhoe Bay and back.

The 7-10 days had come and gone and we hadn’t heard anything. We figured since it had been a couple of weeks the parts were bound to be sitting there waiting for us. We called, only to find the shop was closed for the week.

We’d spent far too much time in Alaska and needed to get on the road south, or risk having our visa run out before we were done exploring the US and Canada.

So we sent Dan a text, hoping to find a way to pay for and get the parts to have them fitted elsewhere. It turns out that although the shop was shut, Dan was still around and didn’t have a problem interrupting his holiday to get us on the road. The bad news: the parts had not even shown up yet but were with the freight company in Anchorage.

The freight company claimed they were due to show up that day so we organised to drop the 4runner off the next morning. Later on Dan text to say that the shipment had not even come in but would be here the next morning, since that was when we had organised to do it it shouldn’t have been a problem. The next day came and the parts still had not shown up. With Dan due to head out of town, it was looking like we would have to get our deposit back which was really not what we wanted. Then the freight company decided it was here and could be picked up, so Dan drove out to the freight company to collect the parts and we met back at his workshop. The whole operation only took an hour and a half or so and we had brand new springs and shocks.

The 4runner seriously needed a wheel alignment before the new springs and shocks, but now it needed one desperately. Dan suggested Alaska Spring which wasn’t far down the road. With plans to hit the road for Canada, I went straight there, only to find they couldn’t do anything until the next day. But after dropping some names (Dan, Green Tree Fab) and explaining we were headed to Canada the next day they shuffled a couple of jobs and managed to squeeze me in. 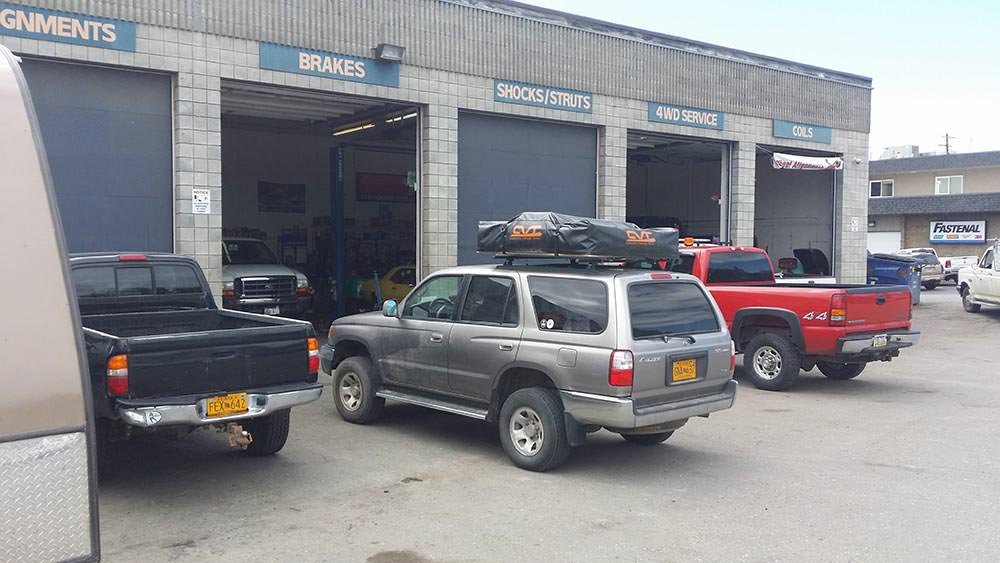 Suspension in place, time to get everything pointing in the same direction.

Now the ride quality has improved significantly and the 4runner is getting to a height we are more accustomed to. Not quite the same as the old Hilux but we’re getting there.

Unfortunately I was hoping the current tires would last until the bottom of the US but with needing an alignment for so long, while we waited for new suspension, they took a bit of a beating and will probably need to be replaced a lot sooner. Especially since we picked up a slow leak on the Dalton Highway.