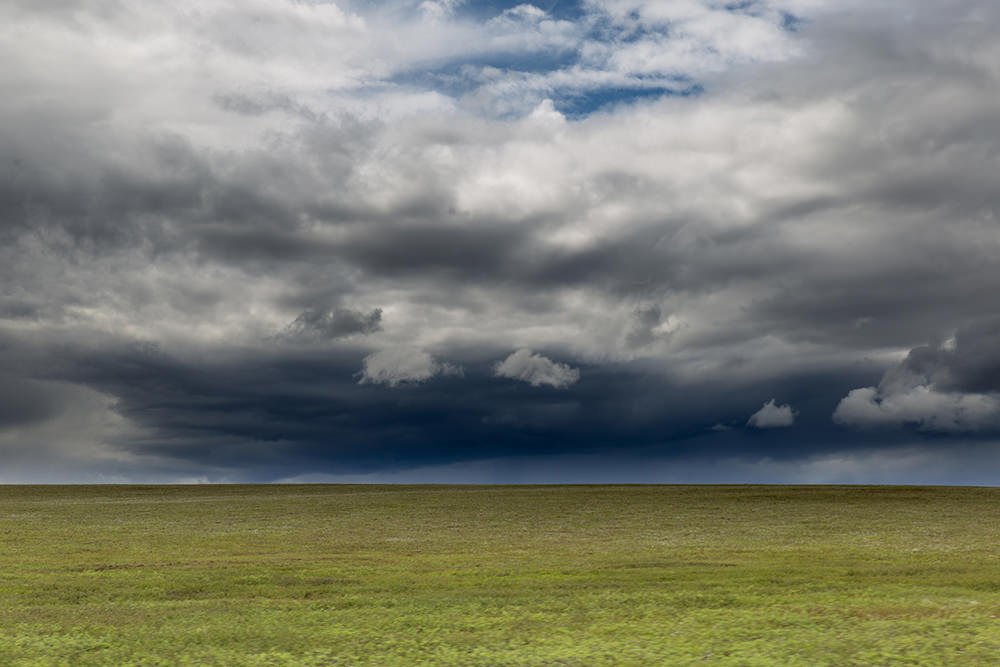 The time had finally come to drive the Dalton Highway up to Deadhorse to officially ‘start’ our journey.

While we had been camping in Fairbanks, we had met a couple from Texas who had just completed the drive themselves. They spoke of lots of mud, roadsides teeming with wildlife and dipping their feet in the ice-filled Arctic Ocean. Sounds like our kind of road trip!

Concerned after our previous fuel tank related failure we invested in a petrol can as part of our trip prep.

The time of day becomes almost irrelevant with the 24 hours of useable daylight as you head further north, so we hit the road in the early evening.

Making sure to stop for fuel on the way out of town.

Only we found that there was a rather nasty crack in the lid of the new fuel can. Awesome.

The guy at the petrol station had no spare lids, but with the other shops in the area shut, he was more than happy to sell us a whole new expensive fuel can. So $24.99 poorer we left with plenty of fuel.

What we hadn’t spent any money at this point was any way to secure the fuel canister outside the vehicle, so when the new one started to leak, we were immediately made aware of the problem. By the time we had driven on to the start of the Dalton Highway, the inside of the vehicle was starting to smell rather flammable. We are pleased to report that petrol does not melt glad wrap (I think non-Kiwis call it cling film?), and this proved to be a handy solution. If only we’d thought of that one before investing in the new can.

It was around midnight when we rolled in to the Arctic Circle campground. 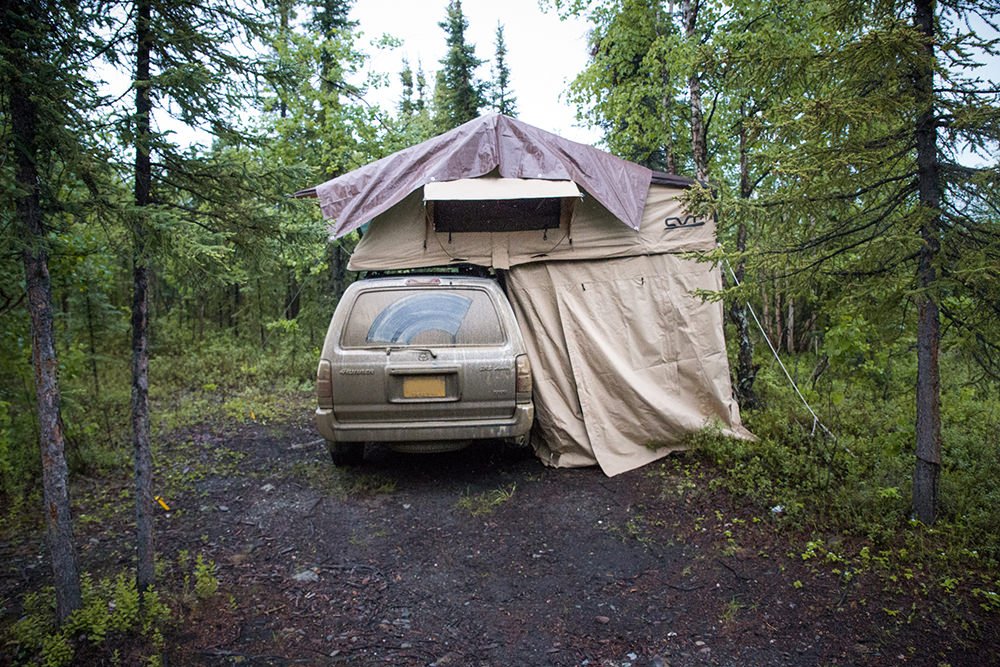 We had met a family from Idaho who were heading out of Fairbanks on the same day, so we weren’t surprised to see their vehicle already parked in the camping area. Although we expect they had arrived at a more reasonable hour.

The journey north continued the next day. At first we weren’t seeing any of the abundant wildlife we had been told to expect. But as the weather cleared, both the wildlife and mosquitoes became more abundant.

Again we passed the family from Idaho, father and son were riding their motorbikes along some of the great northern highways, with a trip to the Arctic ocean marking the furthest point of their journey (Their blog Two Tire Detour). It sounded to us like a pretty spectacular summer holiday. Although, we have to admit, we rather liked tackling the mud of the Dalton from the heated comfort of the truck. This was especially true as light sleet filled the air as we were driving over the Atigun Pass. Yay summer! 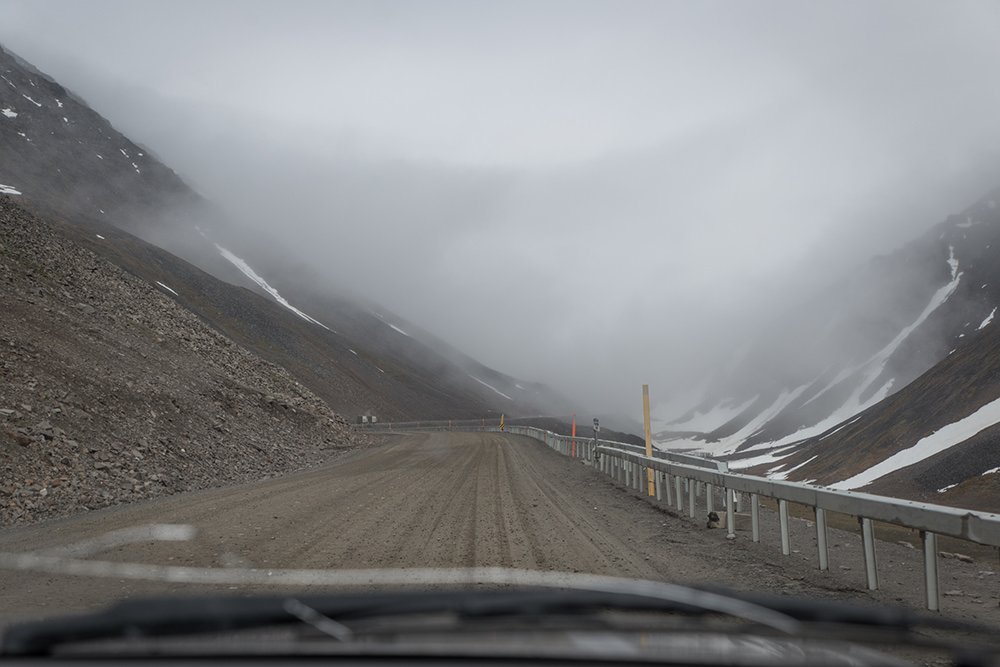 Driving into the storm at the top of Atigun Pass

Sometimes it is fine to be a big sissy. With a heated seat.

Day two had been another late start, due to not wanting to leave the tent and face the Arctic Circle mosquitoes in the morning. 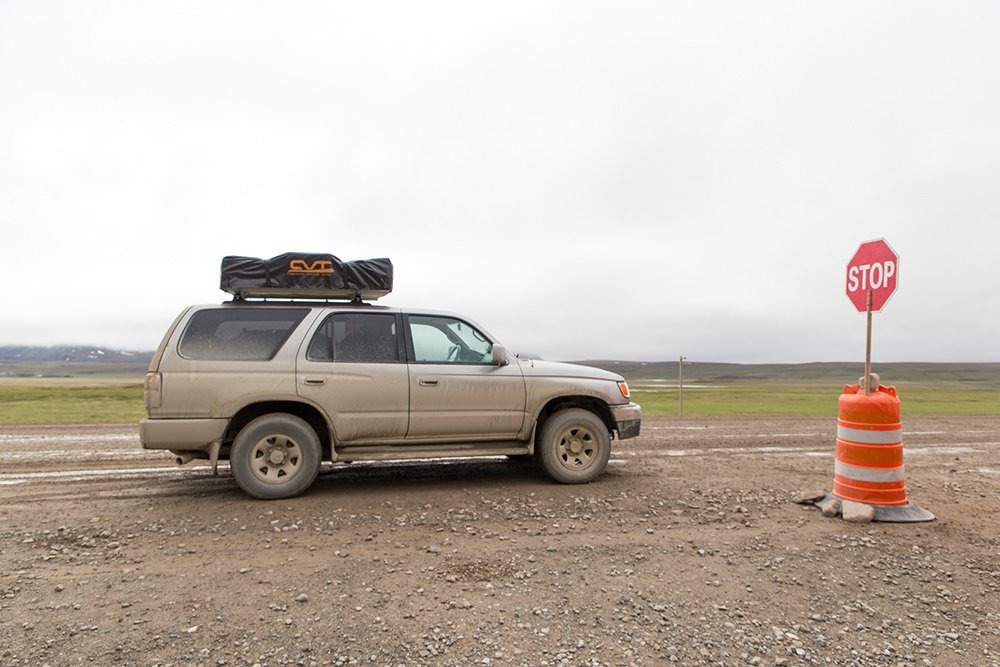 Combined with further delays from a lot of stopping to look at stuff and plenty of waiting at road works we found ourselves crossing the barren tundra of the Northern Slope in the cool evening mist. The only real sign that we were in the land of 24 hours of sunlight was Javier, our GPS freaking out and not knowing if it was day or night any more. 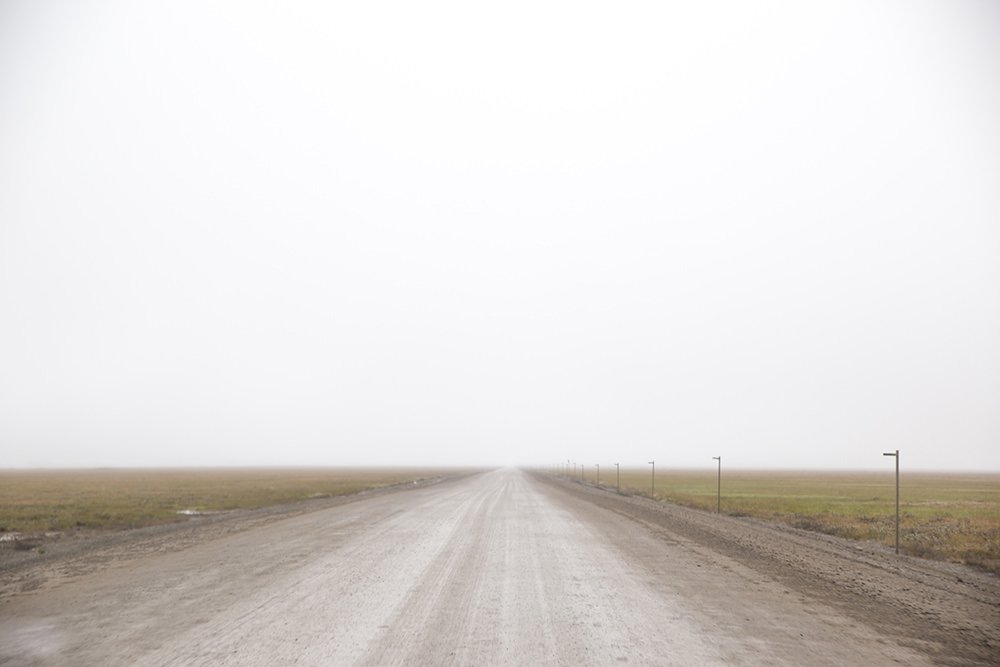 After a quick drive around Deadhorse to see the sights (there aren’t really that many) we found ourselves the perfect camping spot just out of town. Surrounded only by tundra and enveloped in an eerie mist. 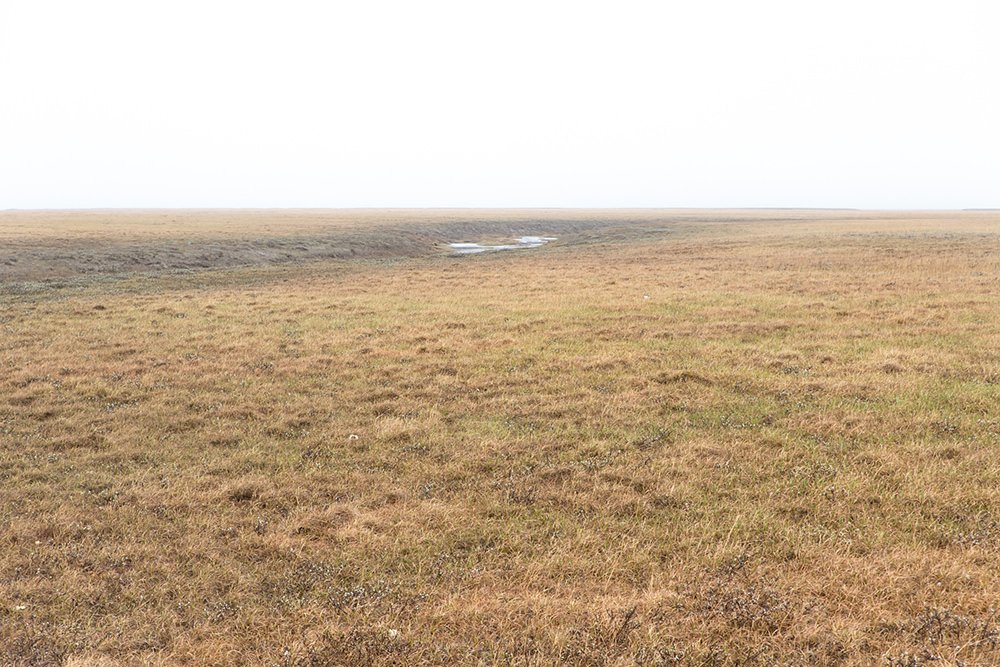 The ‘view’ from the campsite

The tranquility of the spot was ruined slightly when we looked over the edge of the bank and saw the filth left by previous campers in that spot…ew. But at least that meant it was a reasonable place to camp, right?

Awoken by the sound of vehicles and voices, we emerge to find that our peaceful camping spot in the mist is actually the site of the local security team’s annual fire-arms training session. Whoops. 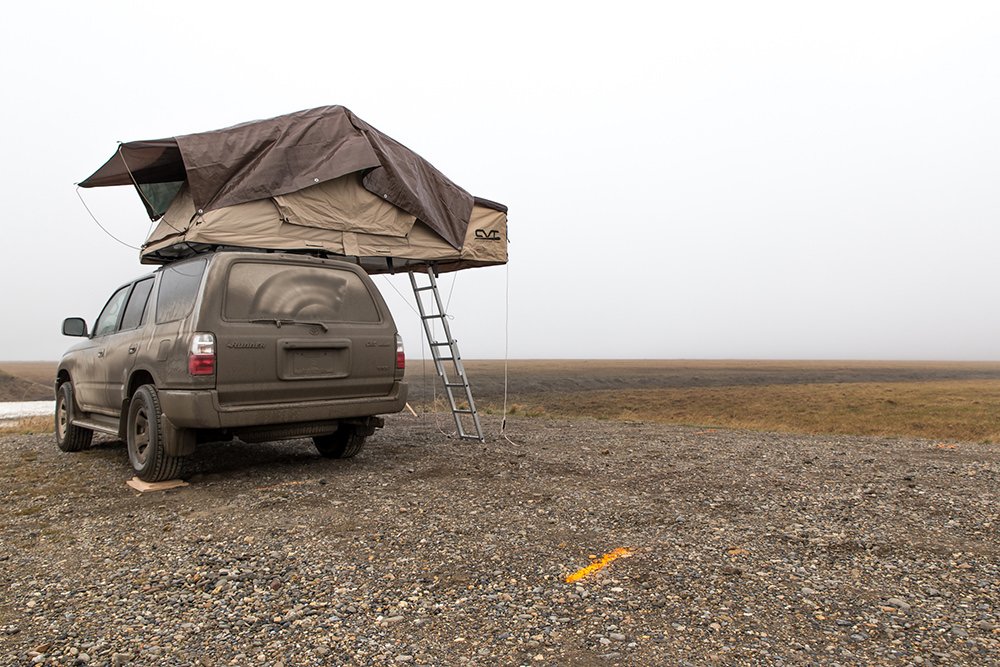 Turns out the orange spray paint marks the point everyone shoots from. The targets are hung on the other side of our vehicle.

Fortunately they were polite enough to give us a chance to move the truck out of the firing range before practice began. Sergeant K was happy to have a yarn about our trip plans, rather than being annoyed that we’d delayed their morning programme.

Since we weren’t allowed to drive ourselves to the Arctic Ocean we hopped on board one of the oil company’s tours and were promptly delivered as far North as we’ll be going on our trip. 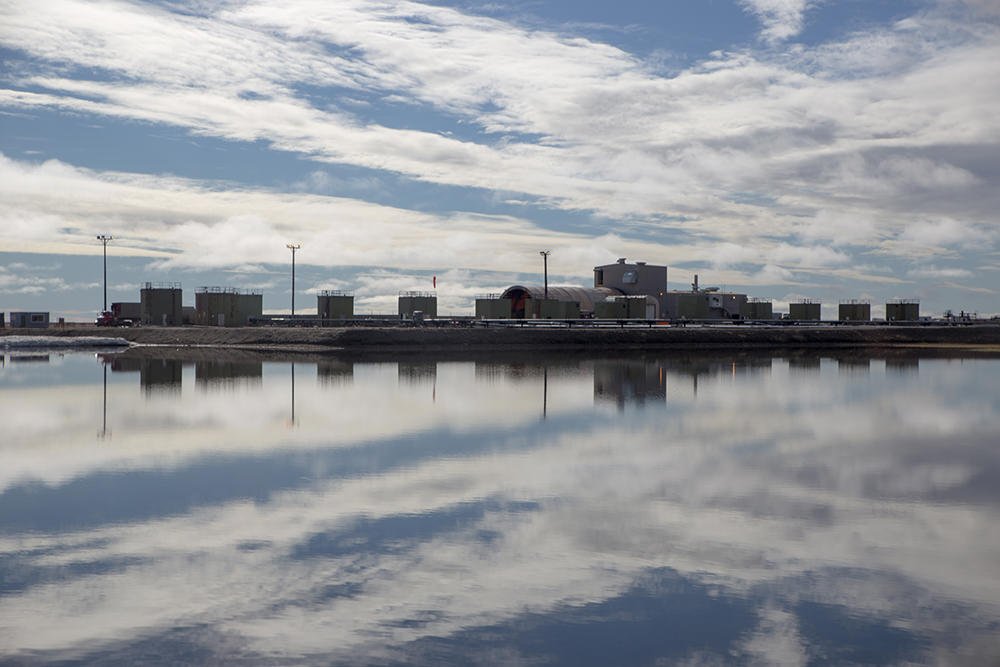 Deadhorse, even industry is pretty in the right light 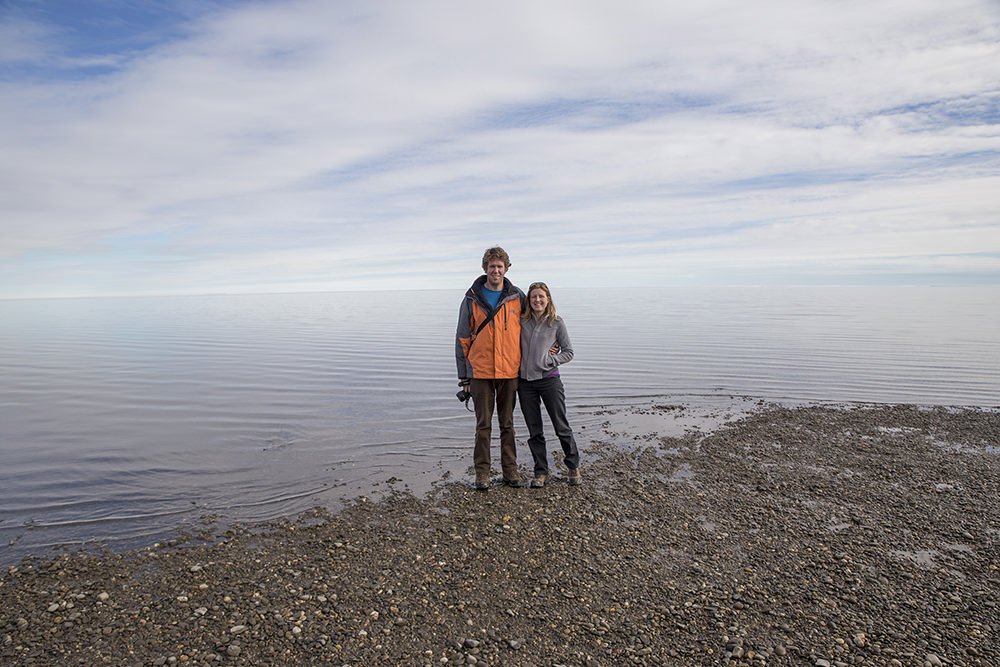 The Northernmost point of our journey 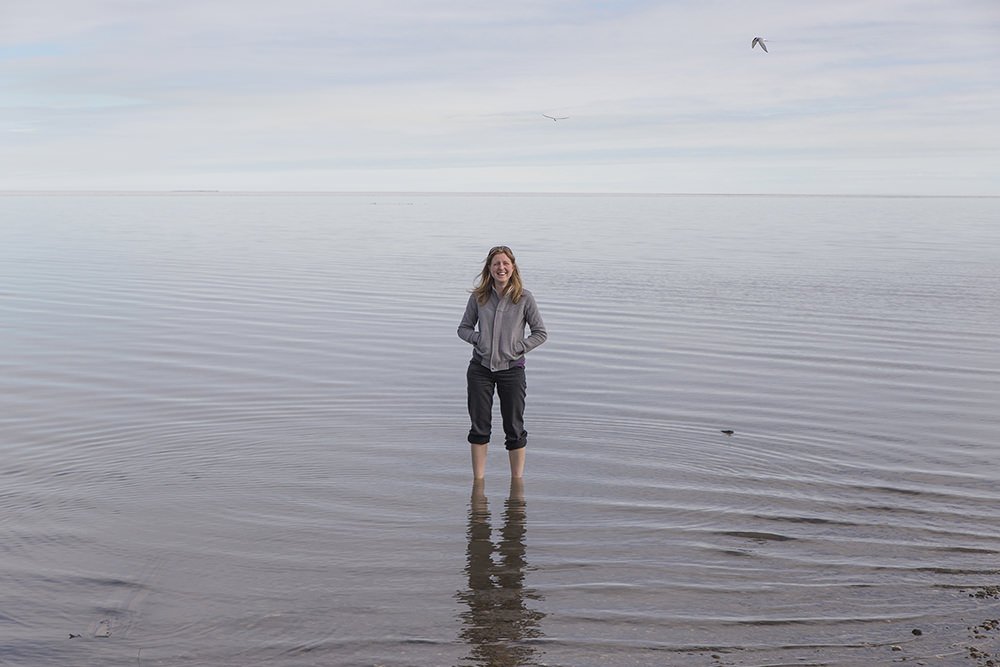 Emma standing in the Arctic Ocean 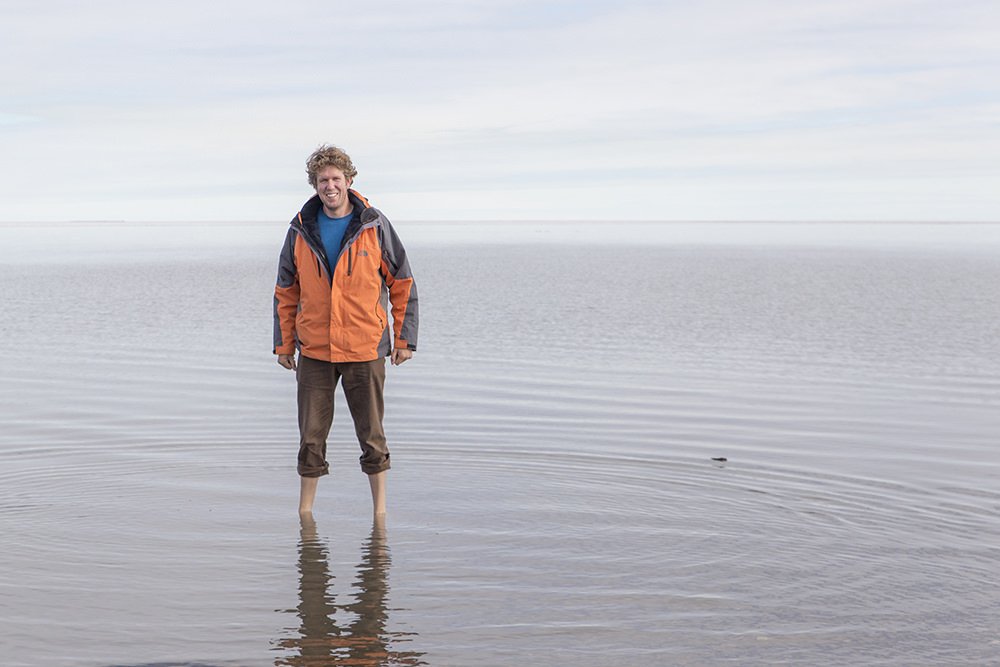 Ben standing in the Arctic Ocean 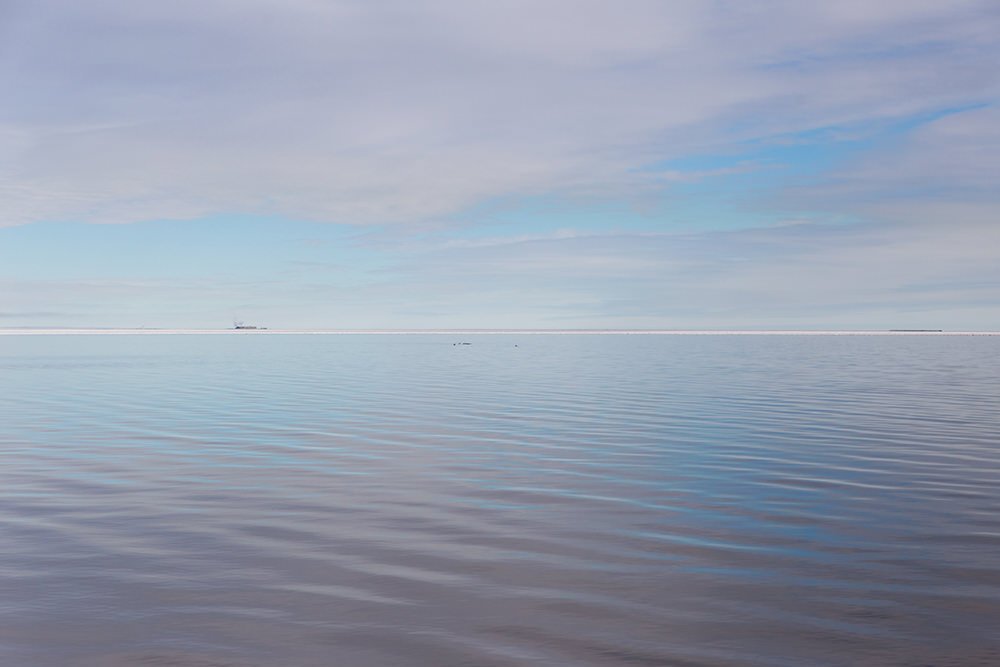 The view to the North 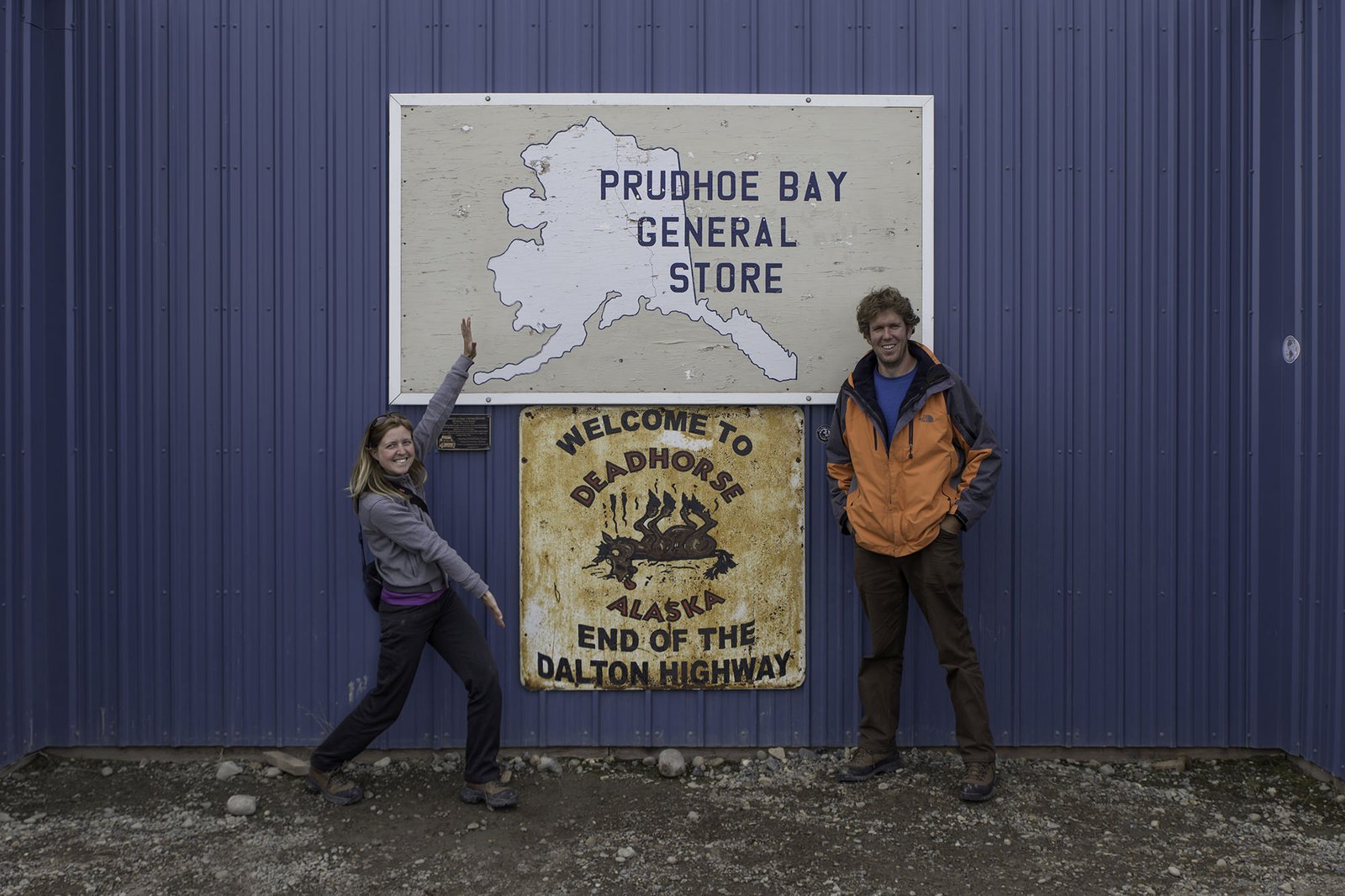 Yep, here we are. The official start of our journey.