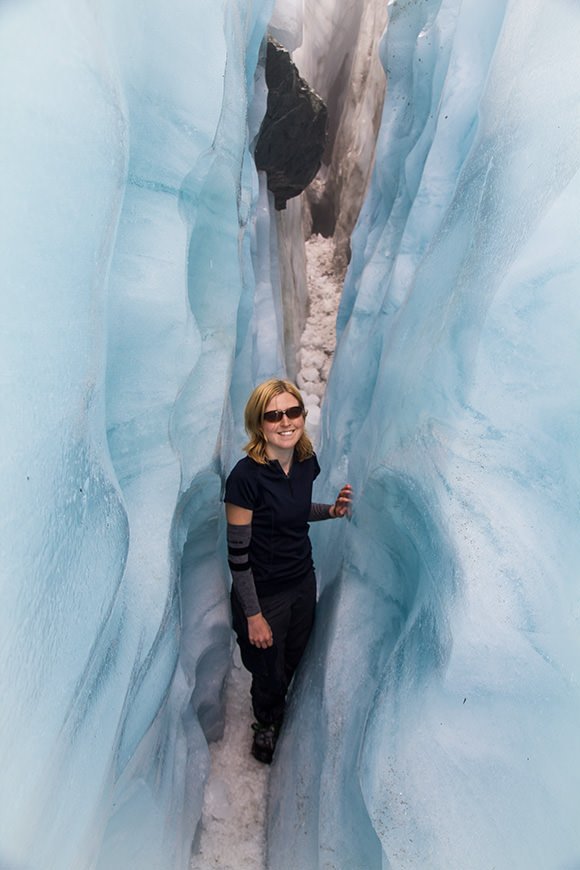 Being a tourist at home is always fun. Today’s photo Friday brings you the obligatory corny tourist photo from the bottom of a crevasse in Fox Glacier. The day we went there the weather was cloudy but unbelievable warm, although it got to be a bit more chilly shimmying though slippery ice caves and winding though the bottom of crevasses. Some of the tunnels were wide archways, others were just narrow tubes, not much bigger than a person, all carved their way through magnificent glistening blue ice.

As we explored, we watched some people having a go at ice-climbing and I decided that was definitely something I will have to try at some point. I’ve never been particularly interested in rock climbing, but somehow you throw ice in the mix and it looks like a whole new kind of fun.

The glacier itself is one of two in the area that, unlike most glaciers in the world, are advancing they have been doing so for most of my lifetime. With Fox glacier advancing at the rate of up to 1m per week it’s fair to say they have grown a lot faster than me.

We had been to Fox Glacier many times before, but this was the first time we had actually walked on the glacier and I’m so glad we finally did—so much more interesting than walking up to the glacier’s terminal face and staring wistfully at it from behind the safety rope.

One day, maybe after our big road trip, we’ll head back and try ice-climbing and maybe even splash out on the helicopter ride to the top, hopefully the glacier will still be advancing away, stubbornly ignoring the global warming.