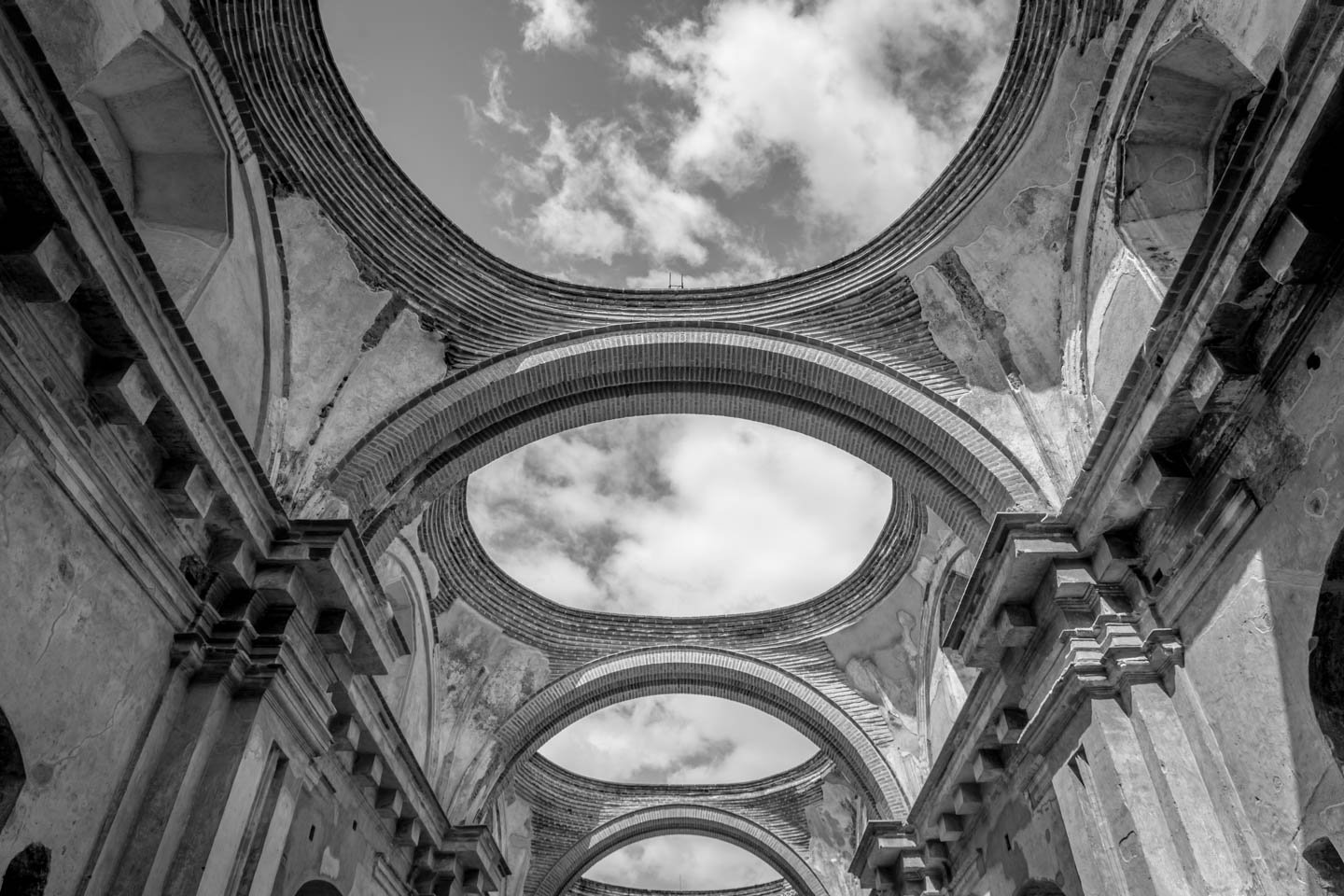 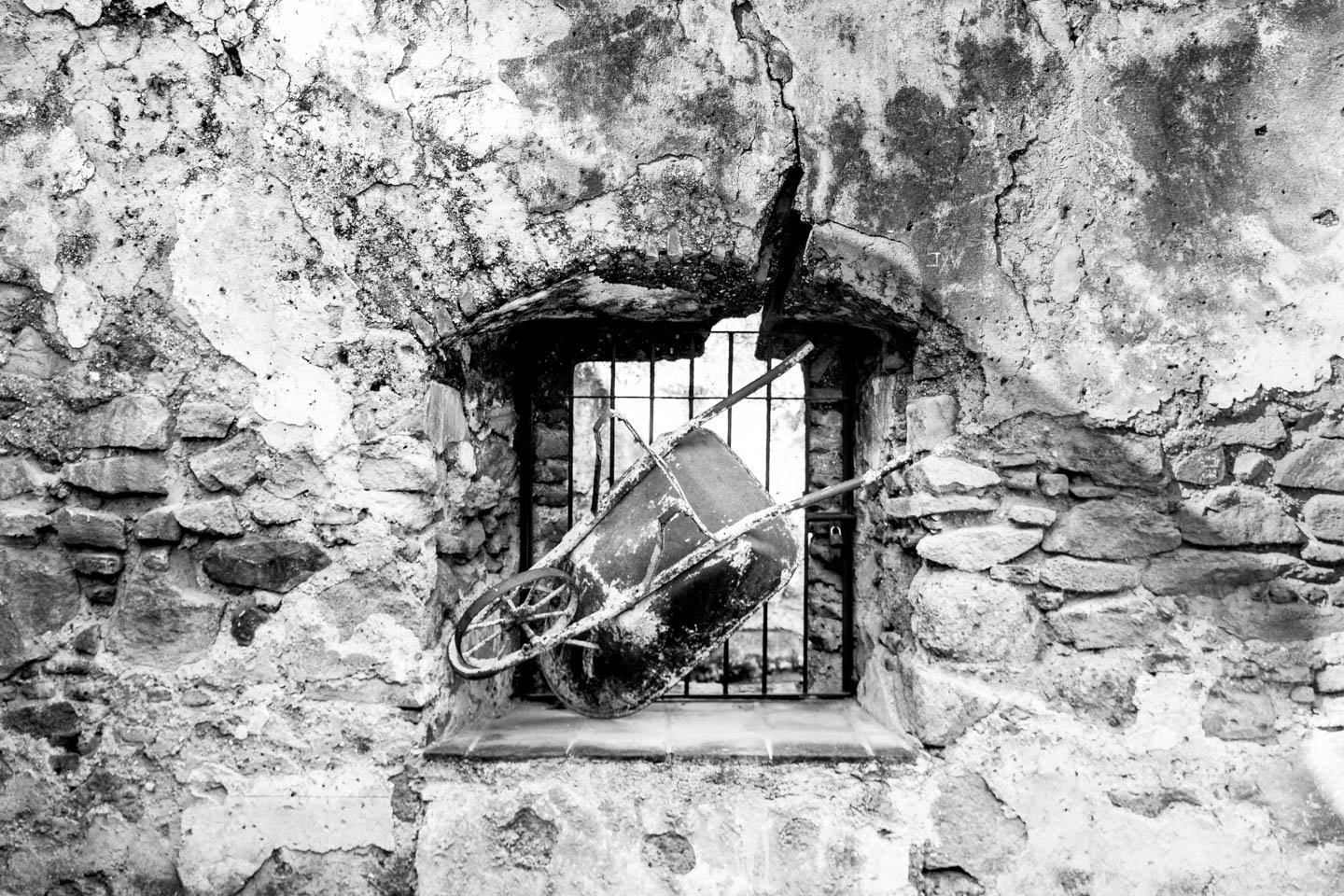 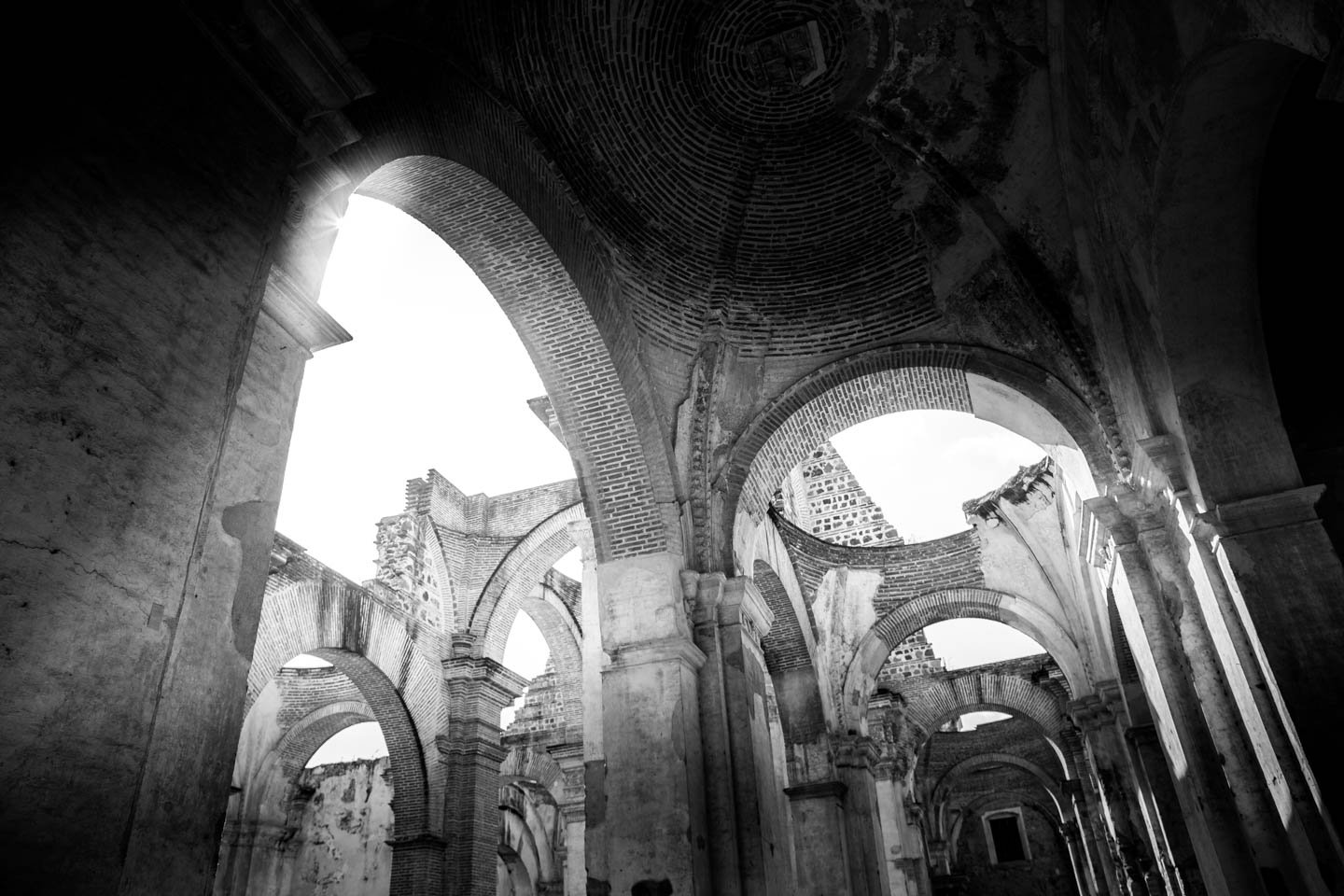 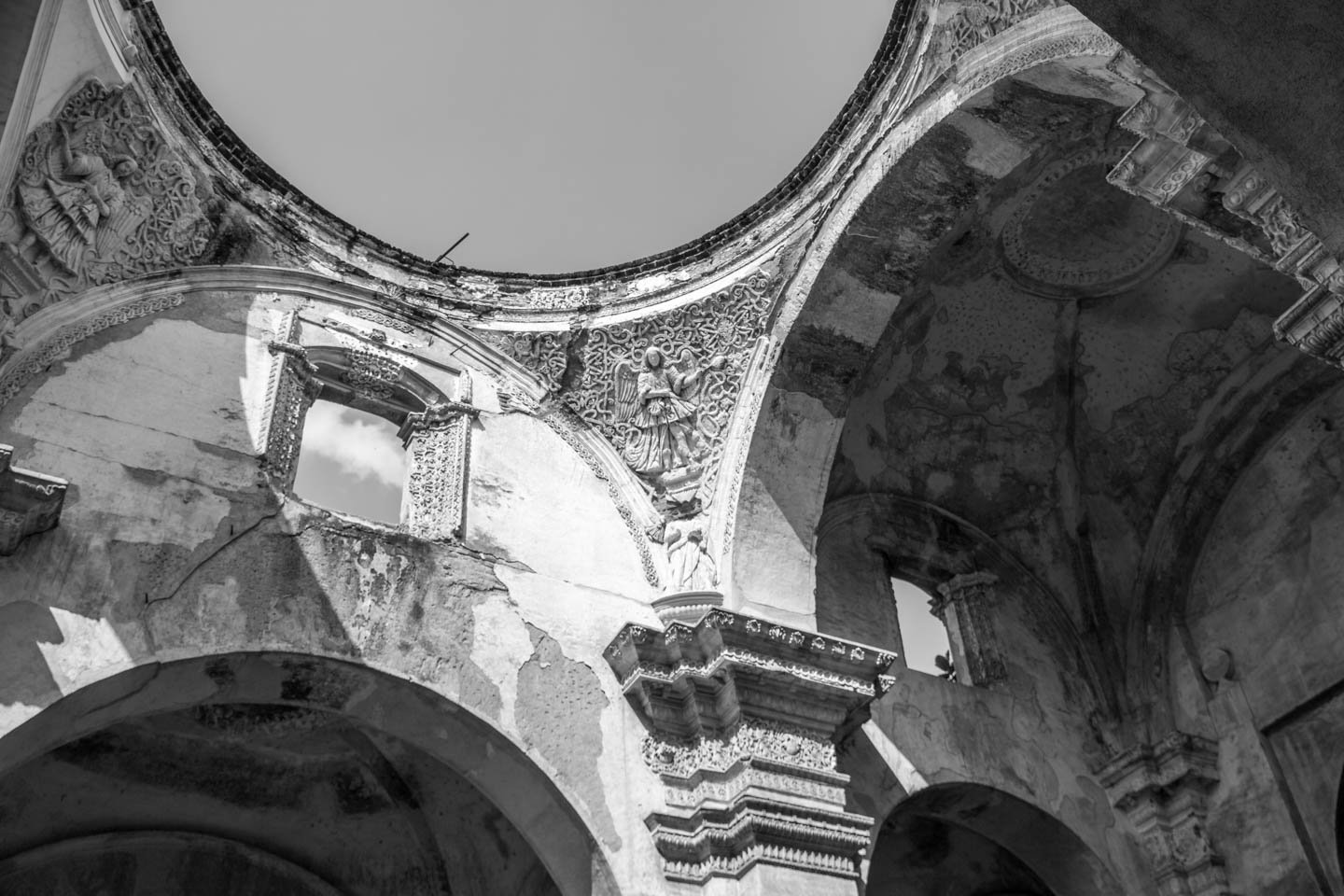 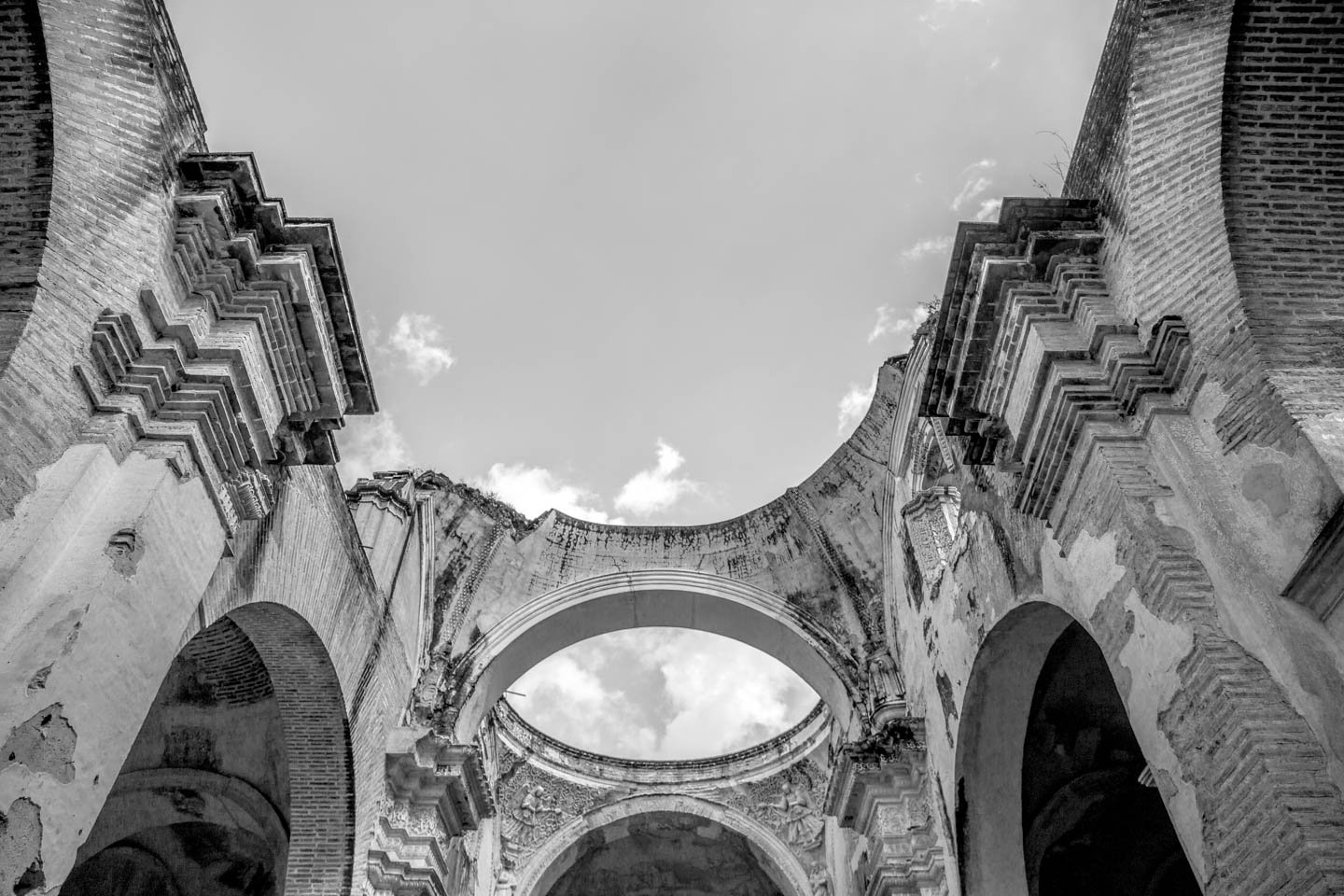 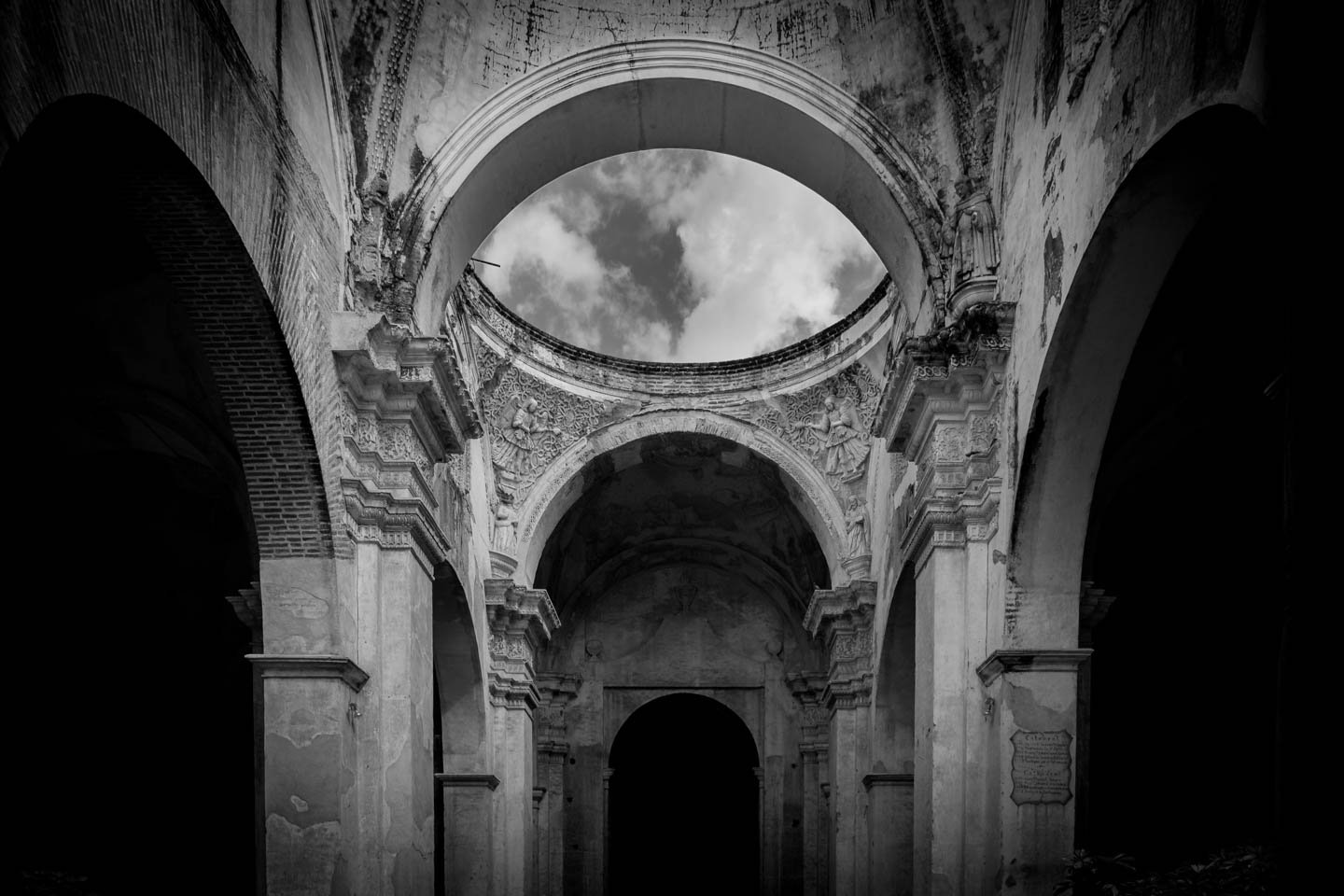 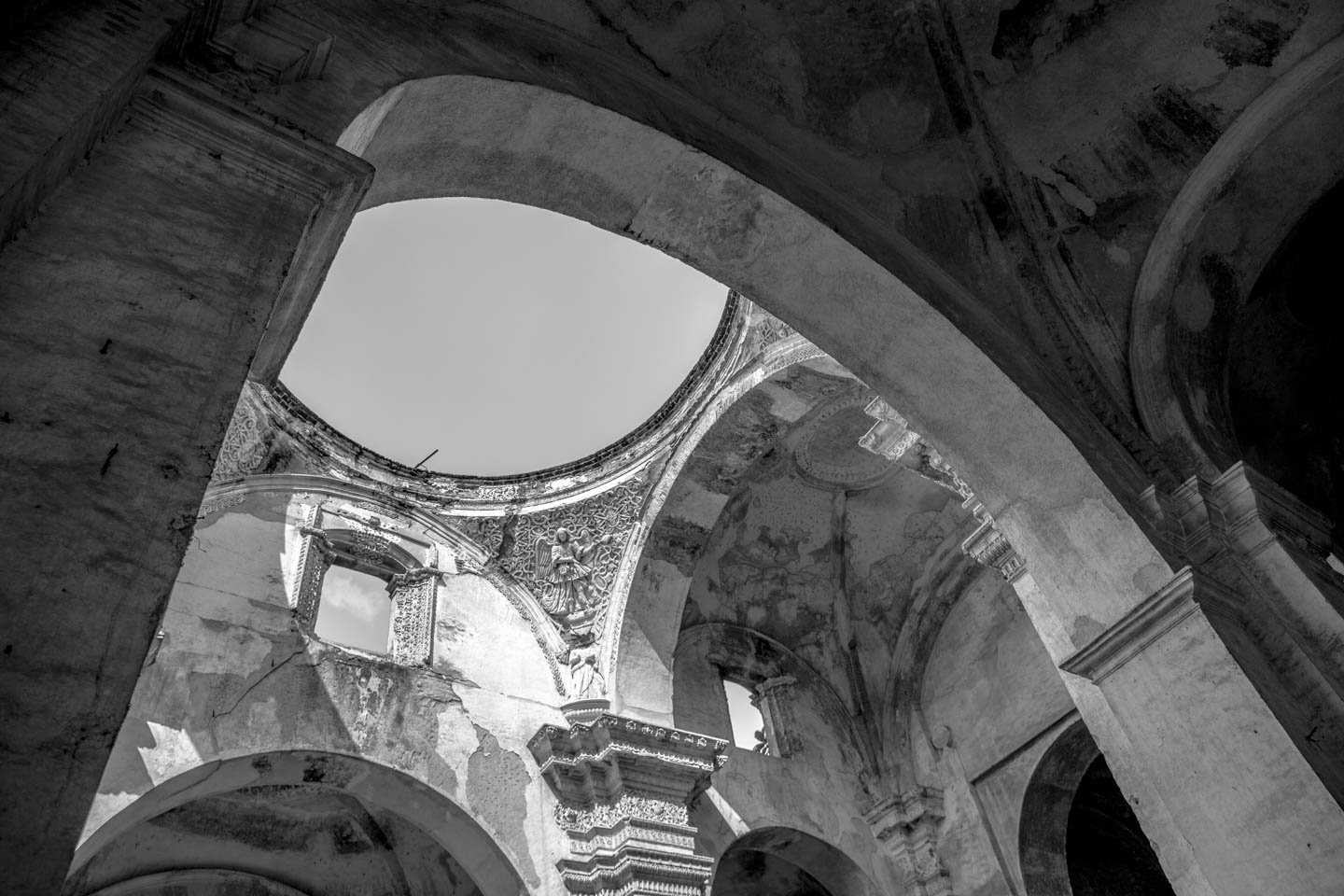 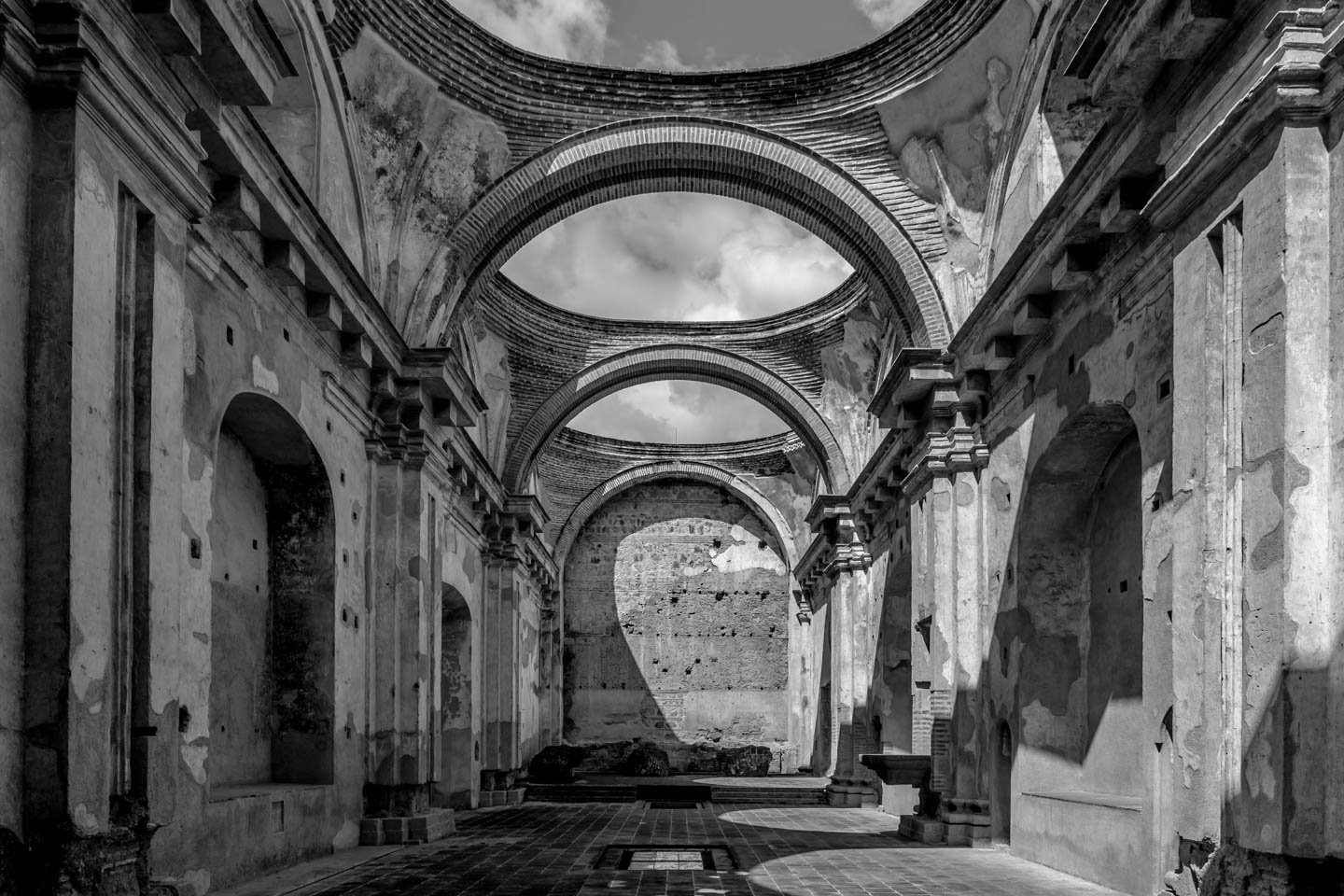 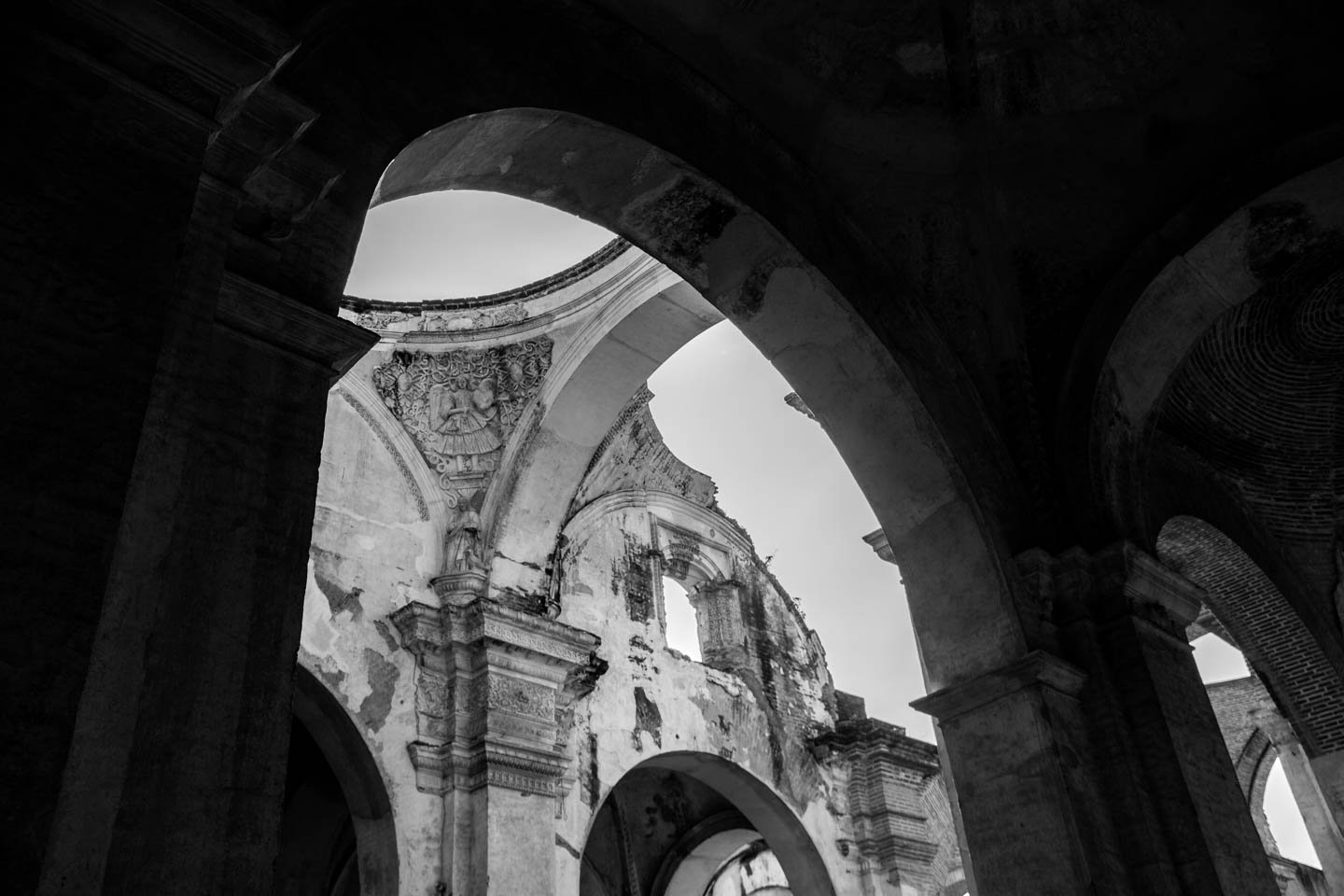 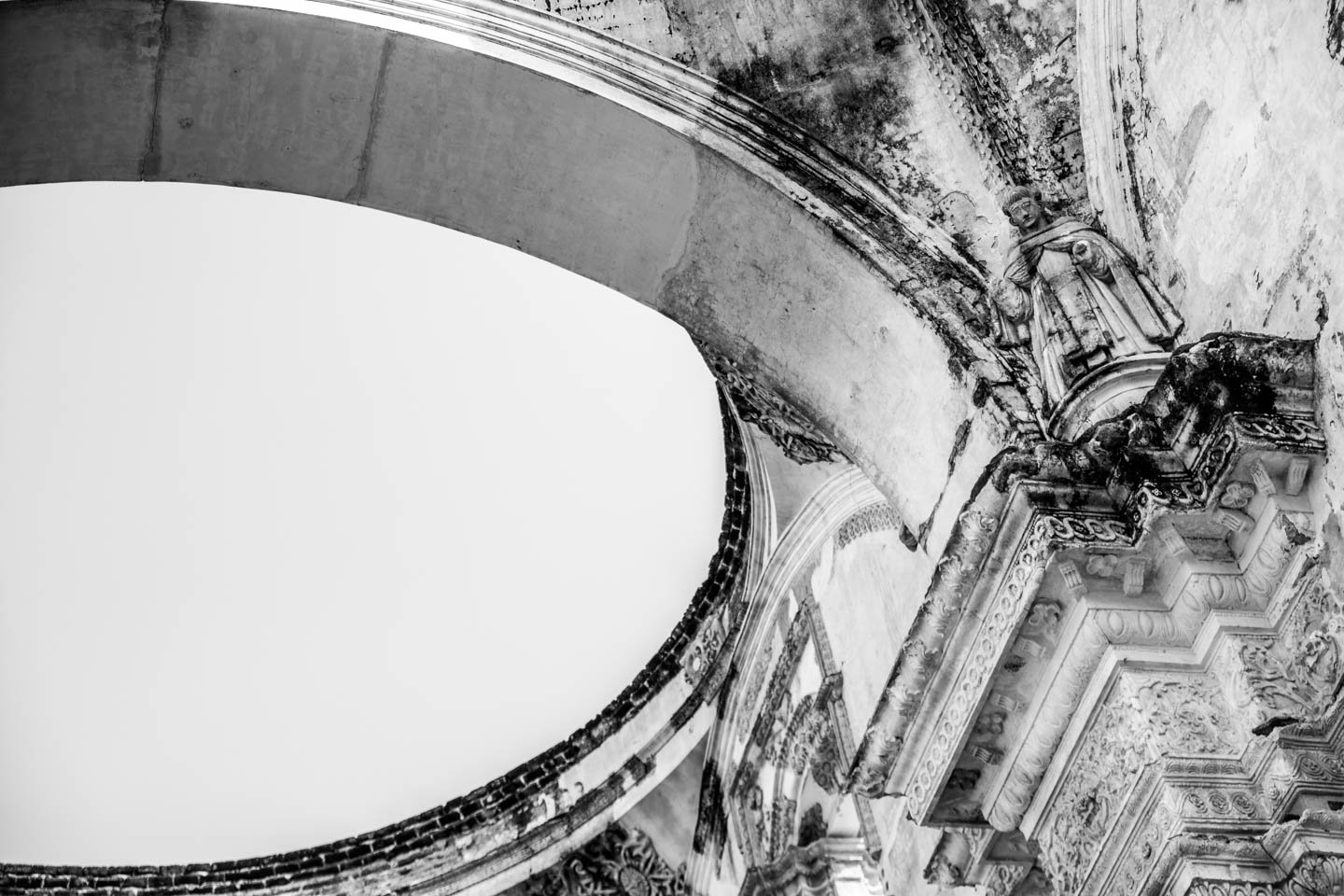 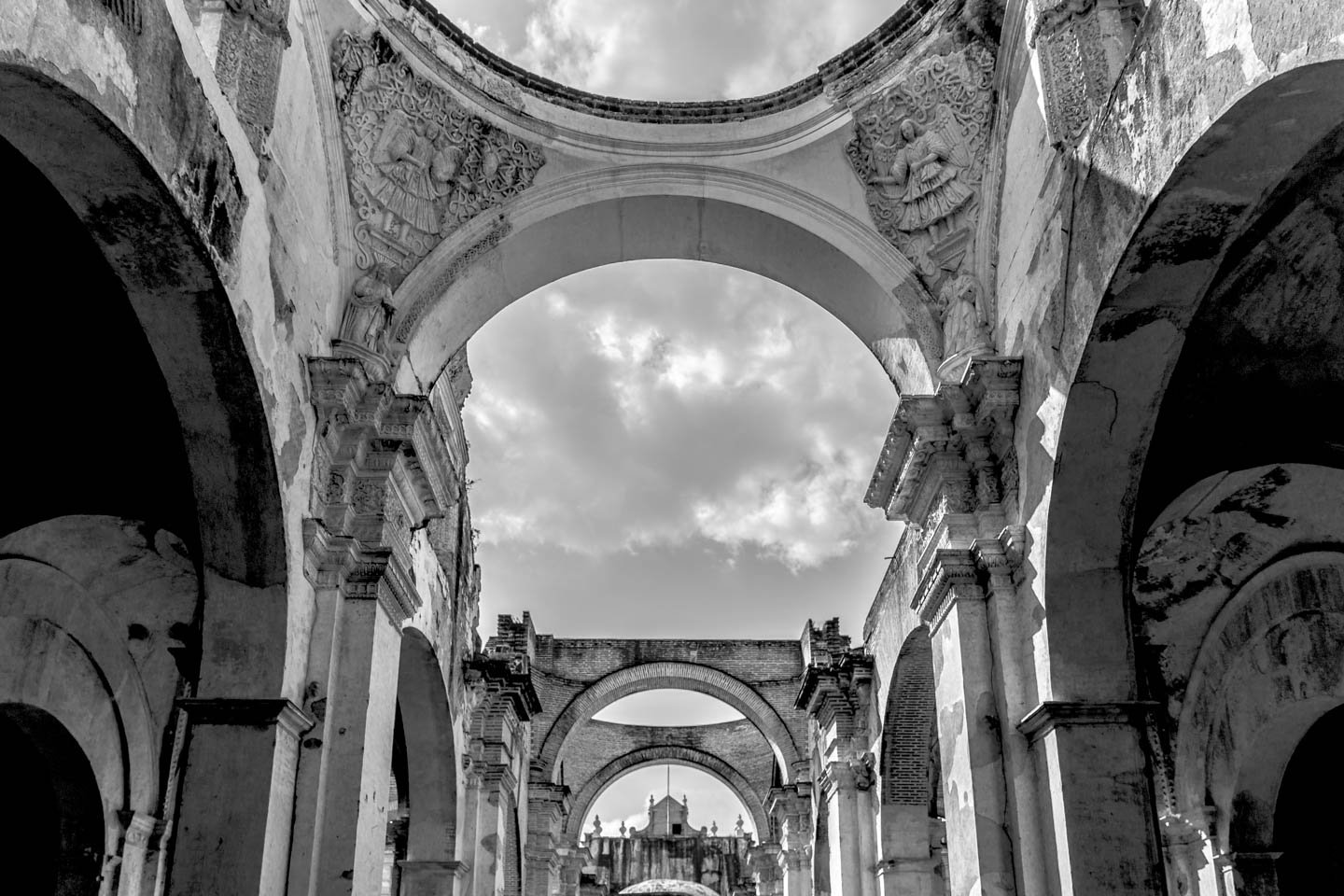 This post is about some things that people from our home town of Christchurch are sick of hearing about. Earthquakes. Rebuilding. And crumbling stone churches. It seems appropriate to be writing about the crumbling earthquake-ravaged churches of Antigua today. Just as our home country was yet again thrown into turmoil by one of Mother Nature’s tantrums.

This recent, large New Zealand quake directed the shaking a little further north. Exposing entire new regions to the worst that Mother Nature can throw at them, stirring up the ocean, breaking up the land, smashing homes and infrastructure, turning people’s lives upside down once again.

You may be familiar with the grand Cathedrals of other parts of the world.

Our cathedral is not one of these.

Our little Gothic Revival style Anglican Cathedral is certainly not one of the world’s most lavish structures. 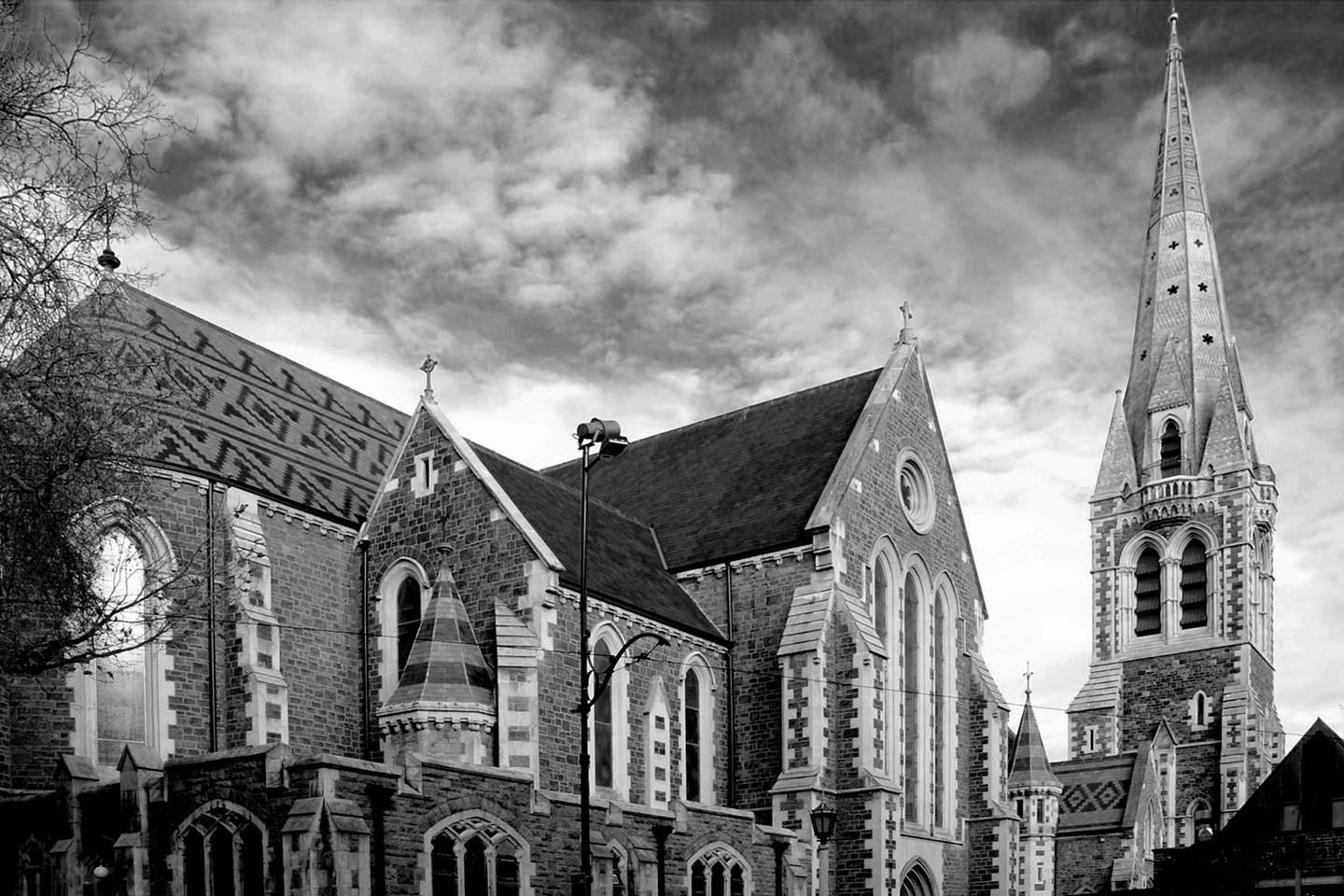 We didn’t actually have a photo of the Christchurch Cathedral while it was still standing, so here’s one from Flickr

But for a town built on a swamp with little by way of landmarks, ‘the Cathedral’ quickly became a Christchurch City icon. During our lifetime it has been second only in iconic status to our town wizard who, along with the cathedral, toyed with the idea of retirement post quakes.

The spire of our Cathedral had fallen over in earthquakes in the past. This hadn’t happened in living memory. Earthquakes weren’t really a thing that happened in Christchurch on a big scale.

Well, that’s what people thought. Just to prove us wrong, Mother Nature stomped her feet wildly on a number of surprisingly shaky days throughout 2010 and 2011. The worst of which saw the centre of the city shut down, buildings collapse and whole suburbs inundated with liquefaction (That’s when the ground you built your house on turns to actual soup.)

Our little Cathedral did not fare well. Perhaps better than others, some historic buildings were ground into rubble by over-zealous demolition teams before the dust had even settled.

Since this time, it has been a long and arduous recovery process for our home town. The crumbled Cathedral has been a symbol of this. 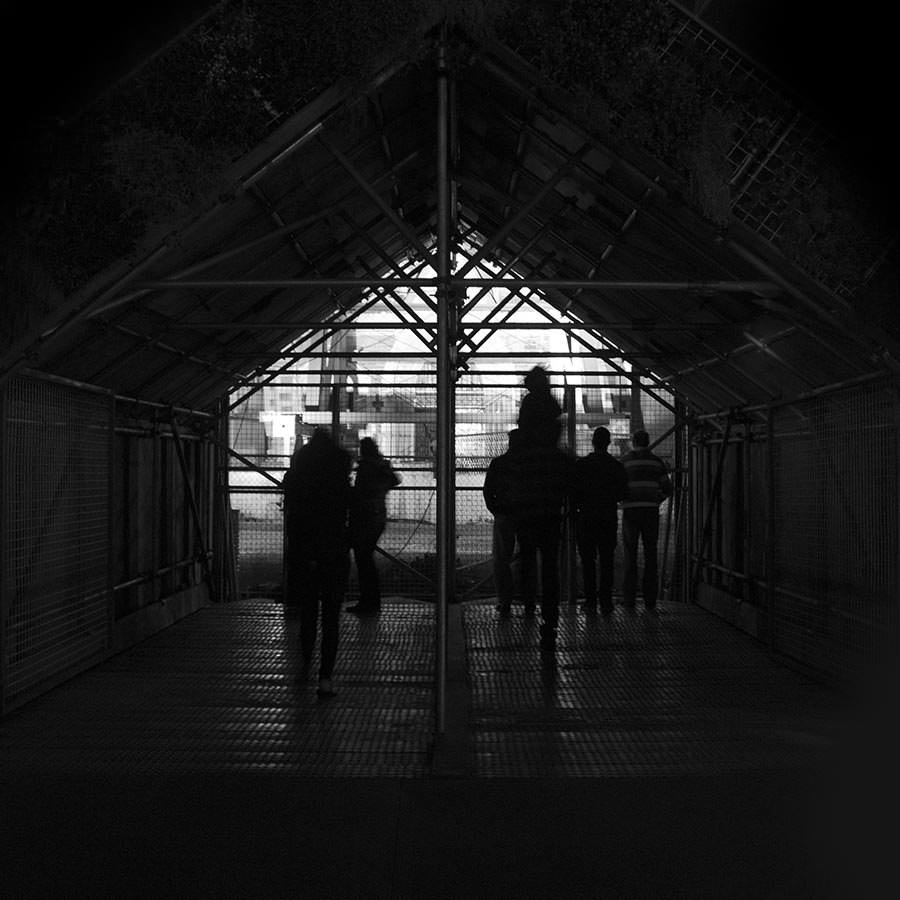 Opponents argued over what is to be done with this icon. Meanwhile, a new city has begun to grow around the Cathedral. But what should happen to this one, crumbly stone building. Should we rebuild it? Should we knock it down? Should we move it? Was the temporary Cathedral a good idea? Was it a waste of money? Who should have the final say—the Anglican church? The town planners? The people of Christchurch?

Despite all the differences between our cities. As we wandered around the streets of Antigua, Guatemala, we couldn’t help but be reminded of home. Sure, the brightly restored colonial buildings and cobblestone streets are absolutely nothing like Christchurch. 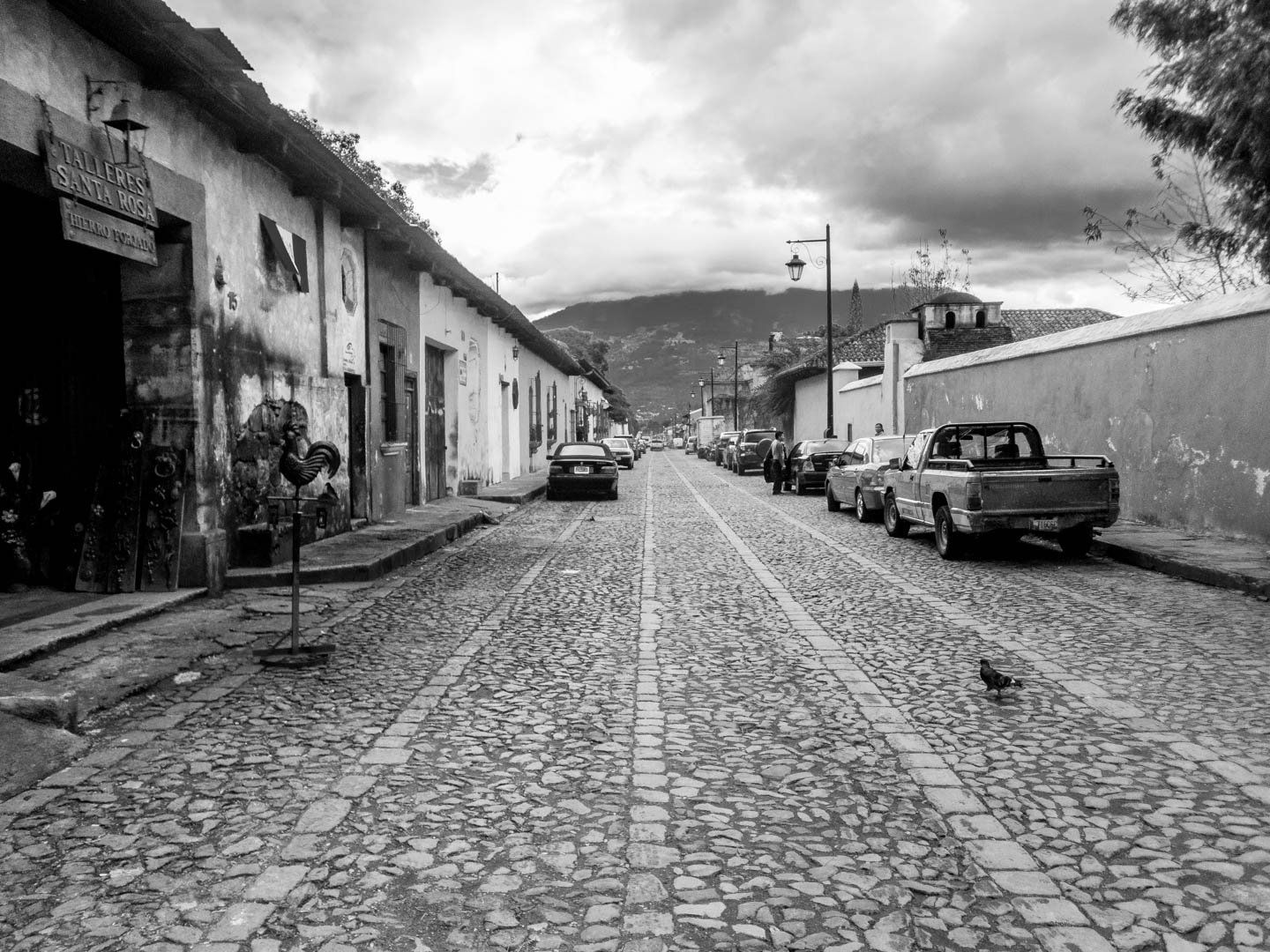 The churches are grander, the markets more sprawling, the buses are significantly cooler. 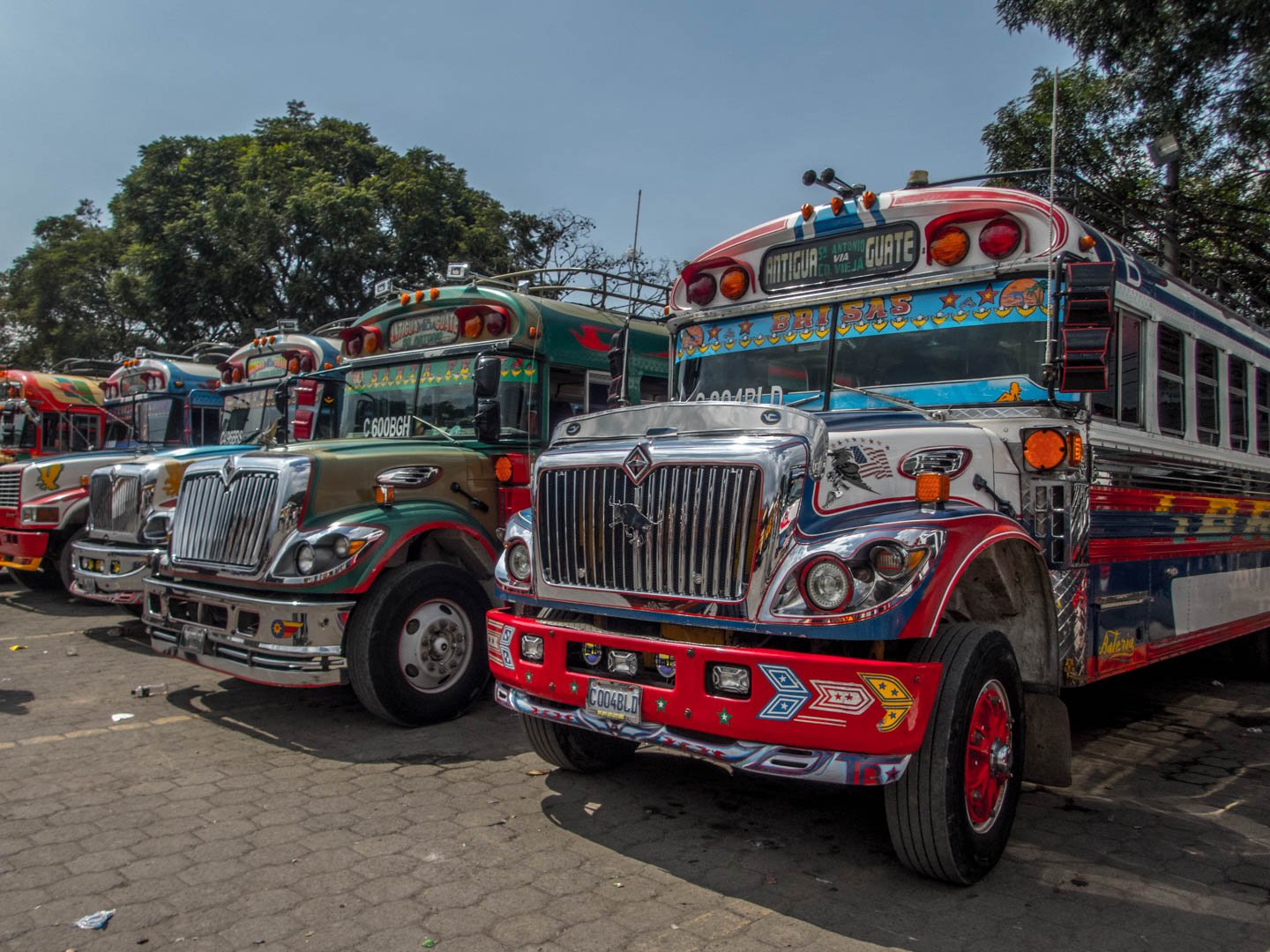 The Christchurch transit system has nothing on these bad boys.

However, we were looking at a town that, ravaged by centuries old earthquakes, had come back to life and grown up around the crumbling hulks of demolished churches. It was like looking into our own future. But in the past. Like Back to the Future Part III, but with fewer cowboys and more stone churches. 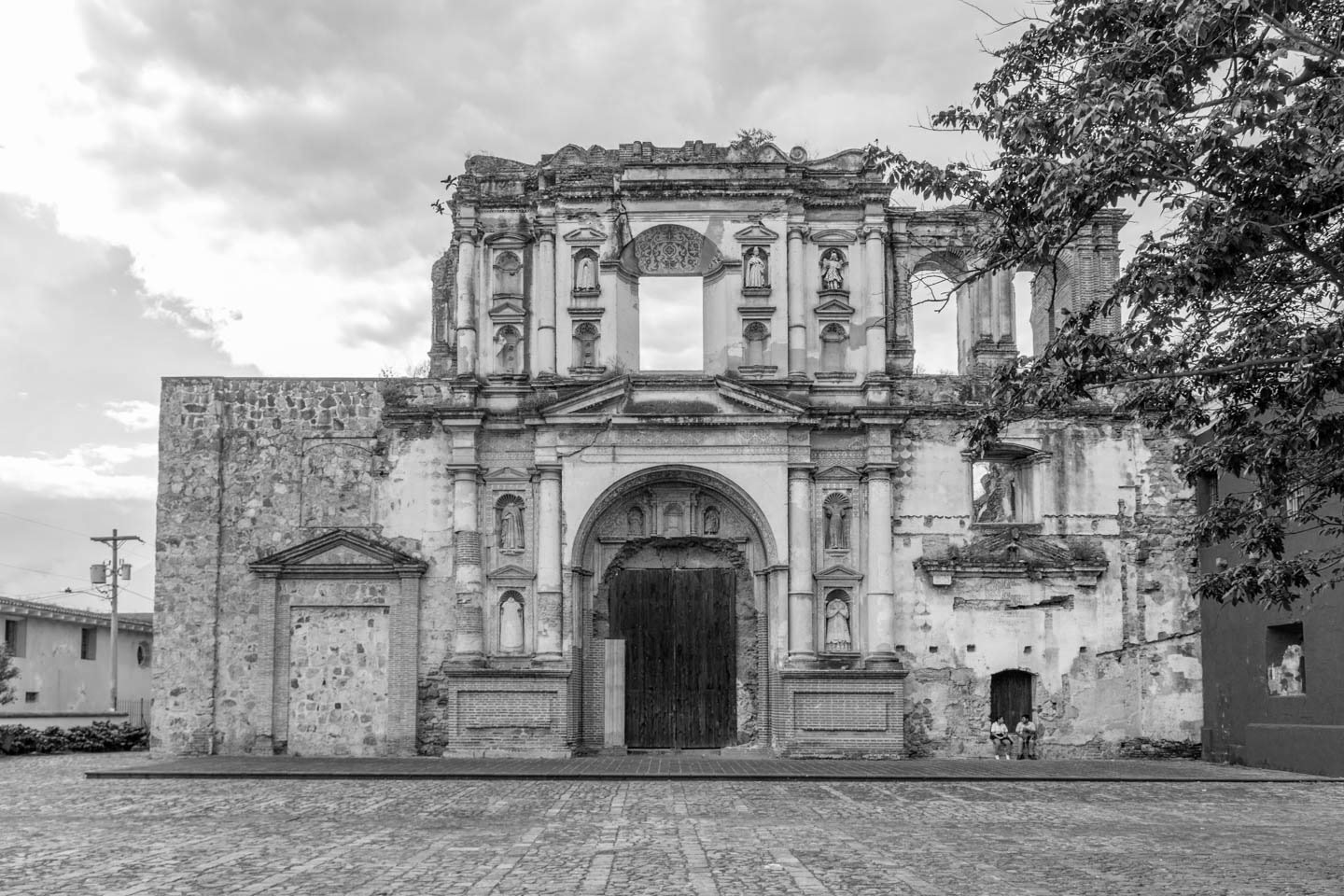 Antigua, under the control of Spain, was the capital city of much of modern-day Central America. The ‘Kingdom of Guatemala’ extended south to include Costa Rica. Antigua was actually the third capital city—the first two hadn’t worked out as planned. (The first couldn’t withstand ‘local uprisings’, the second, destroyed by lahar from a nearby volcano).

After 200 years as capital, Antigua lost its status as well. This was after years of devastating earthquakes had shaken it to the very core.

In 1717 a 7.4 magnitude quake left the city in ruins. There was talk of moving the capital then, but enough people fought to stay that the rebuild began. 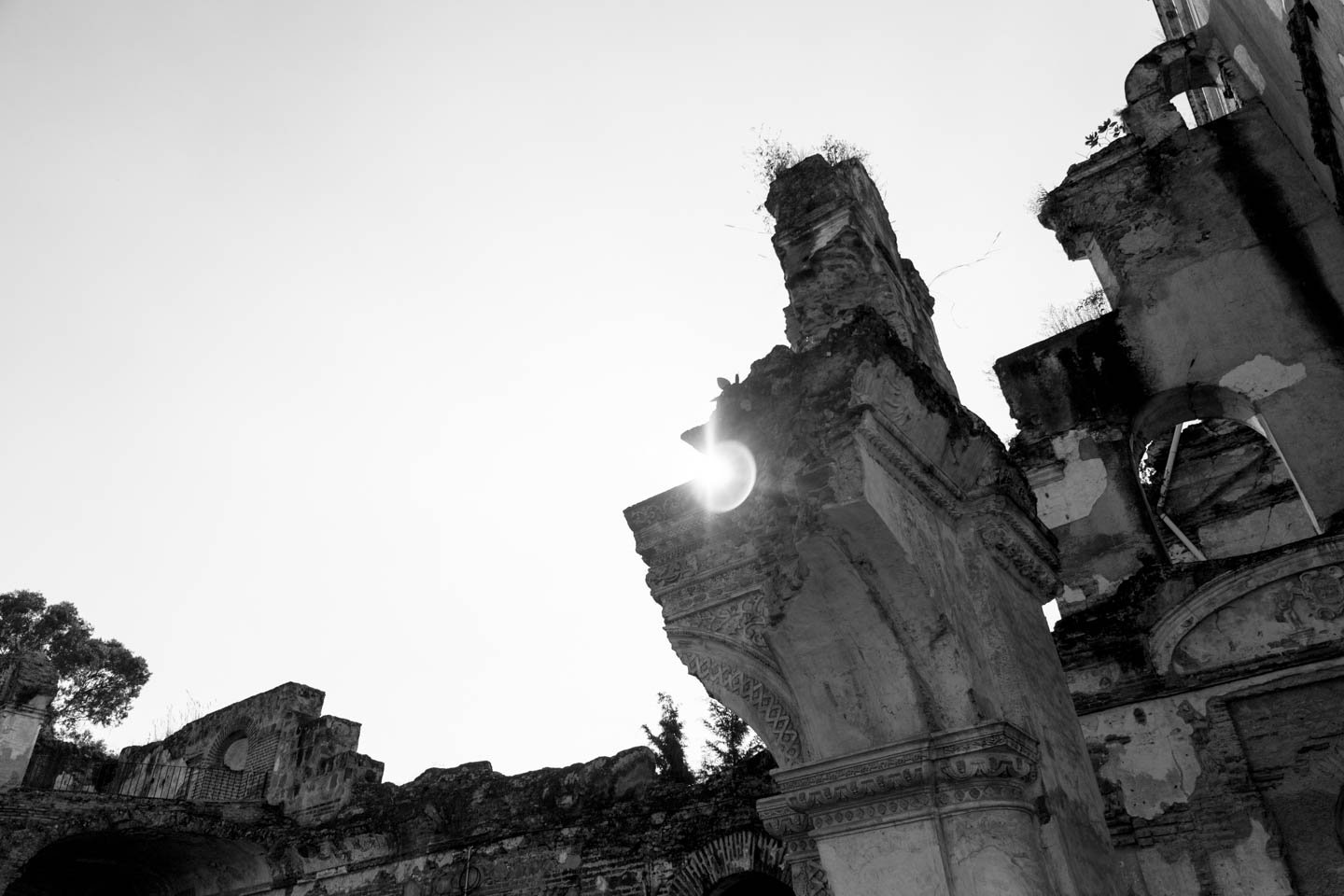 Another large quake in 1751 caused new damage, but again, repairs began in earnest. 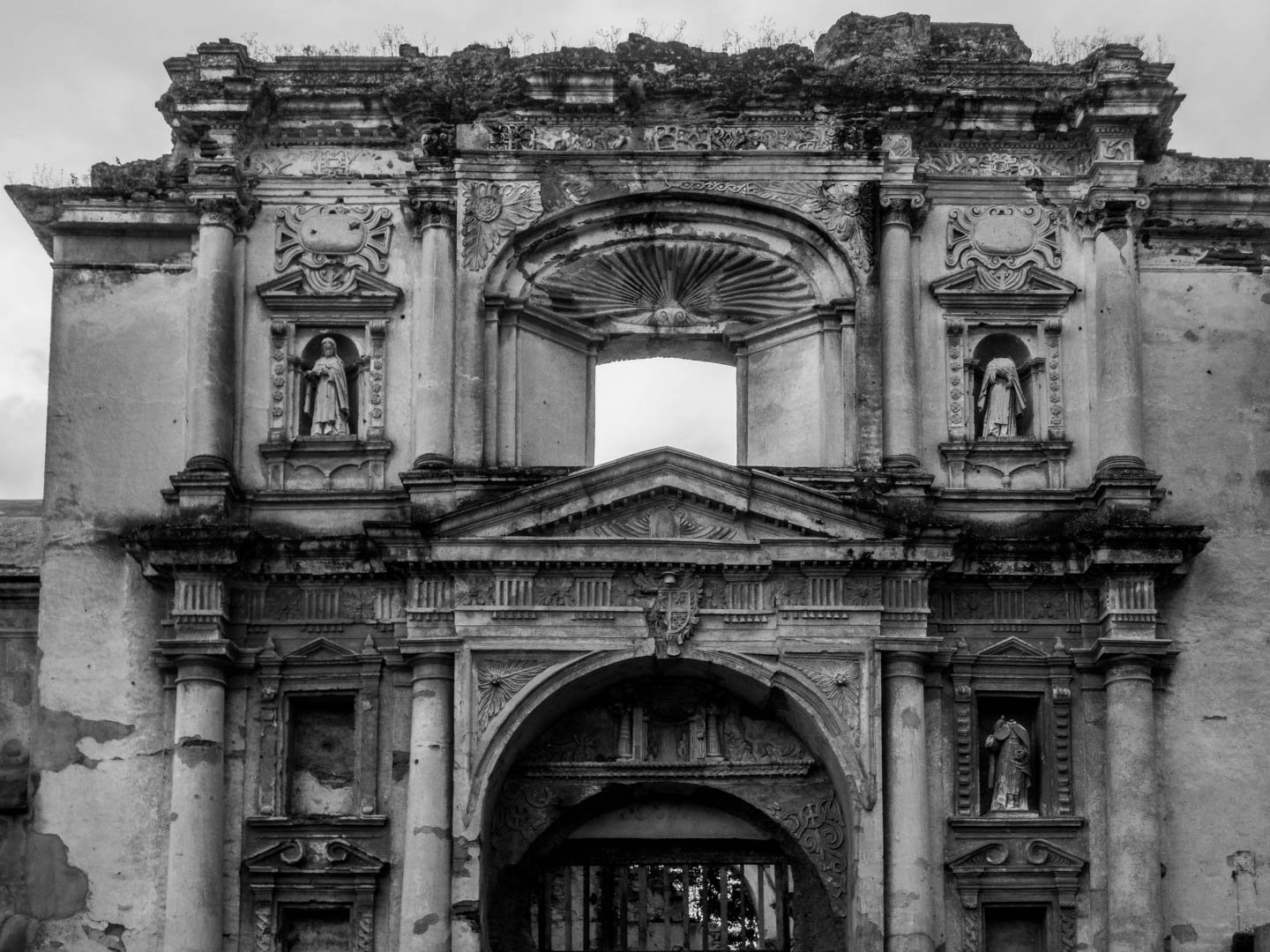 However, this was eventually followed by a devastating 7.5 magnitude shake in 1773. 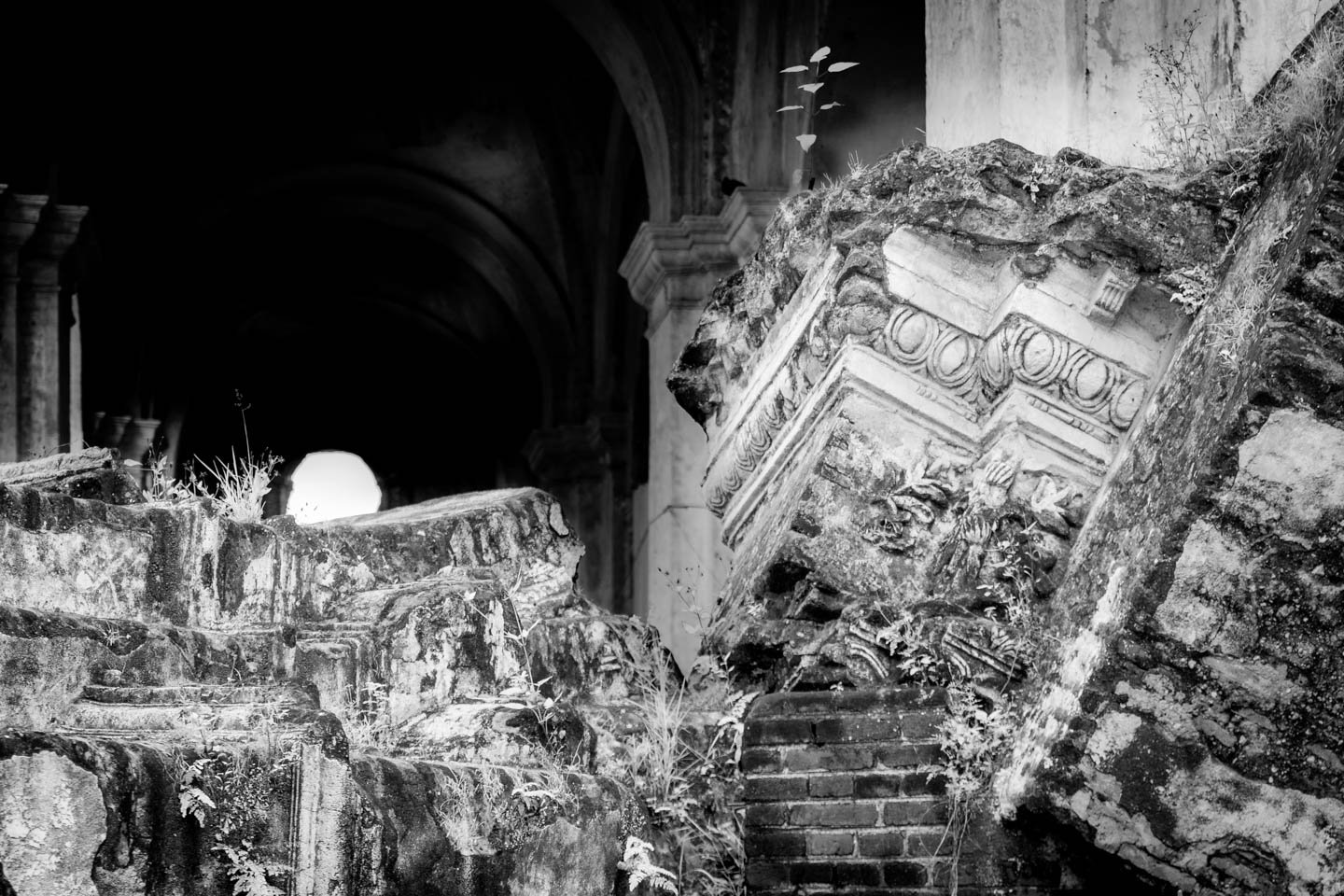 This earthquake and the ensuing months of aftershocks led to the decision to move the capital to the current location of Guatemala City. The crumbling churches of Antigua were left to their own devices. 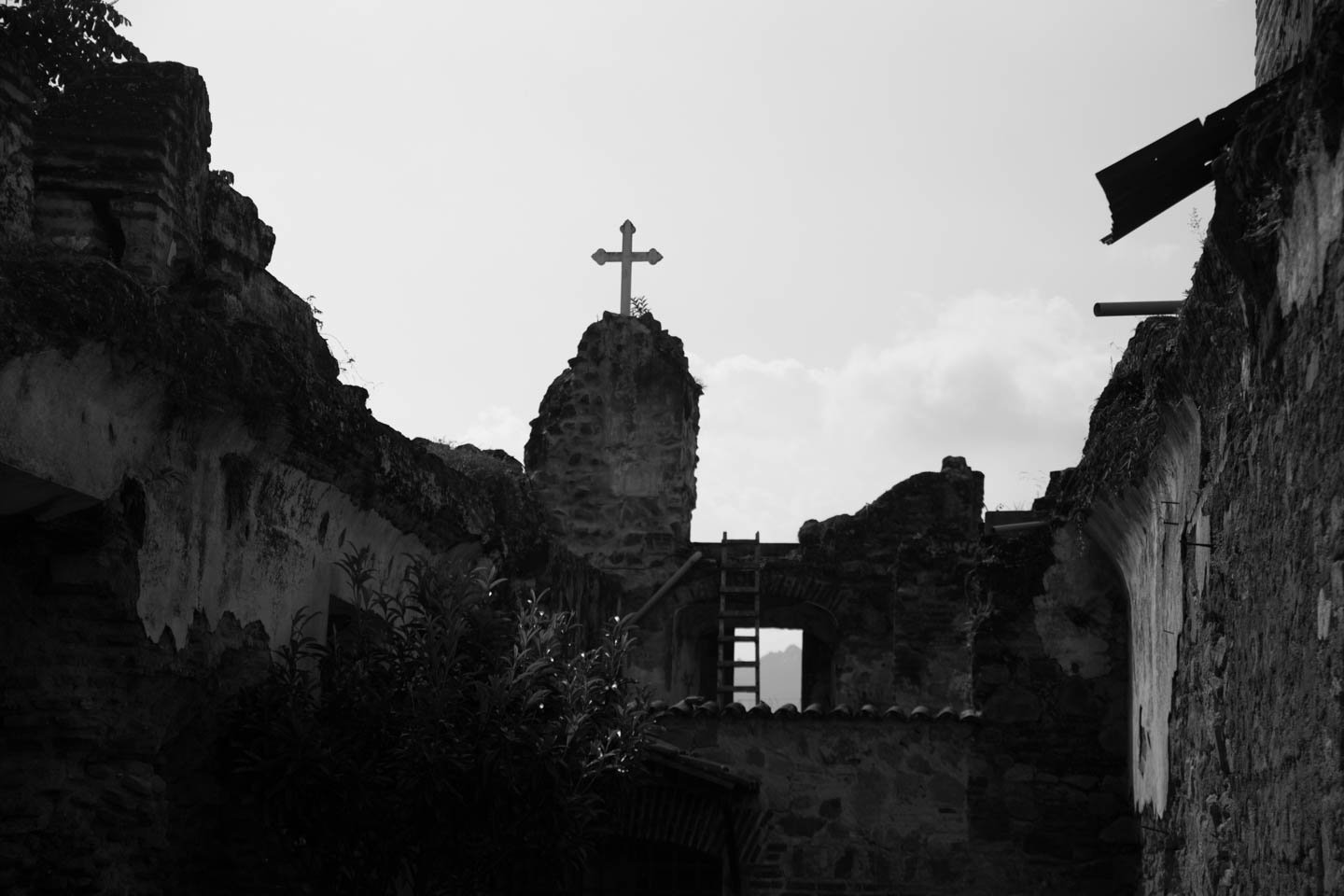 To visit Antigua today, is to visit a modern, bustling tourist city with an ancient heart.

The crumbling ruins of colonial churches lie mostly un-restored. Some have been converted into parks. 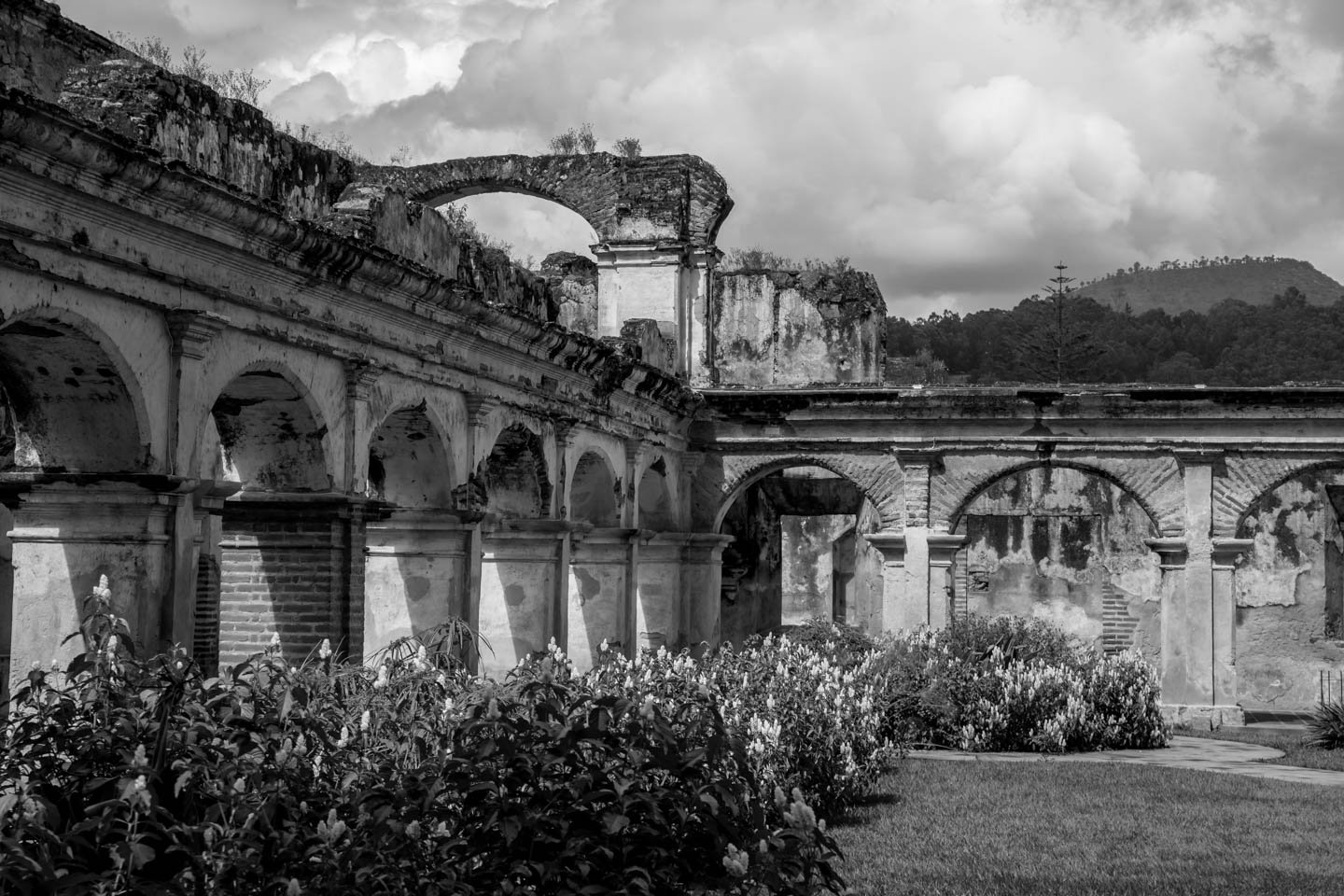 Others survived, or partially survived. The collapsed sections of some have been made into peaceful gardens. Courtyards are formed by surviving structures with restored, bare arches looming above, with only sky for ceiling. 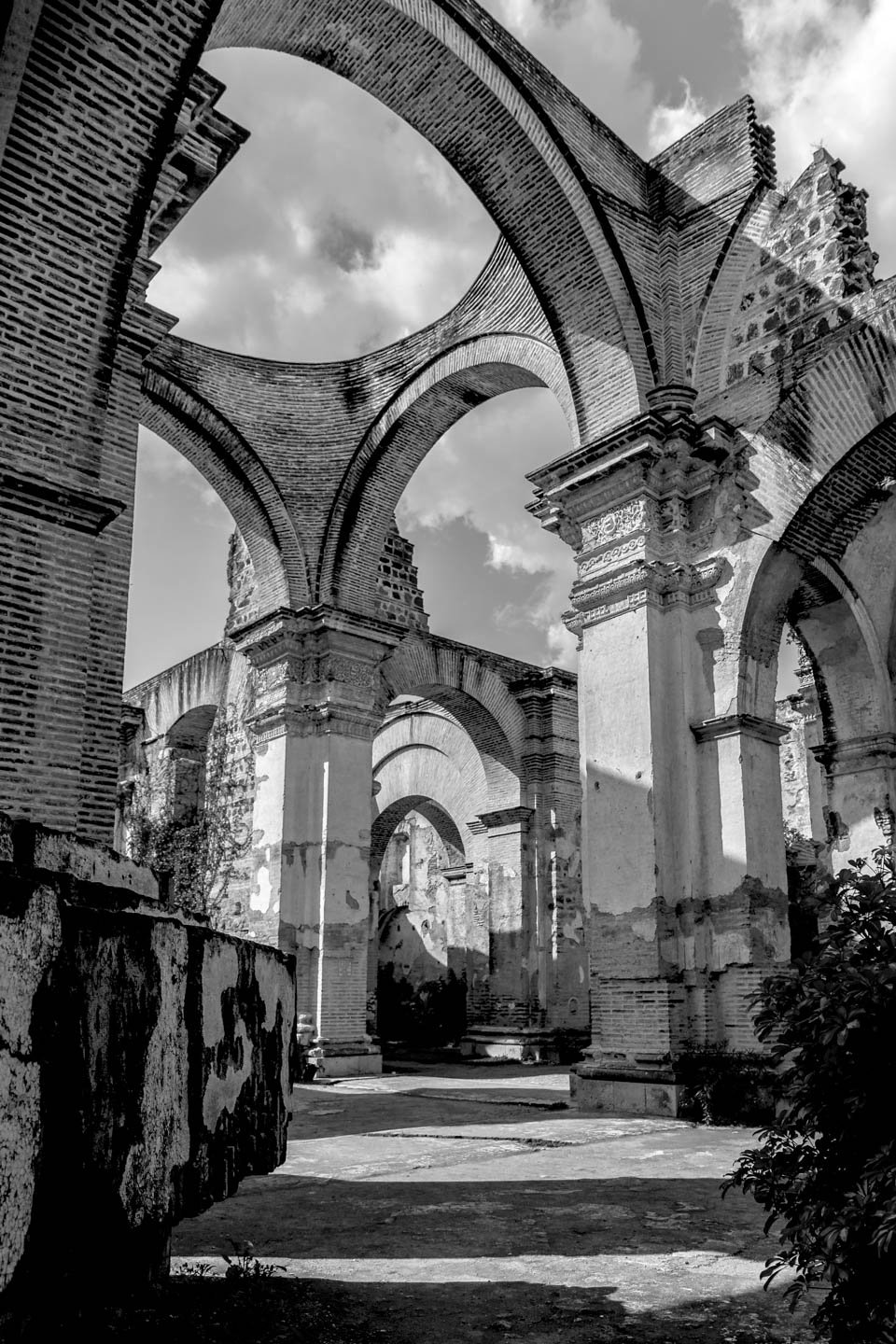 It is only when we dwell on the crumbling church in the heart of our own city that we truly consider the turmoil and chaos that must have followed these tremors. The arguments about what to rebuild after the first quake. The unexpected chaos of following shakes. The months of unrelenting aftershocks hampering recovery.

All of that is now ‘ancient’ history in this colonial city. The churches are now considered ‘archaeological ruins’ the city is a bustling tourist hub, the devastating earthquakes of the 18th century have passed well beyond living memory and are the stuff of legend.

Everyone is aware of the perilous place their city lies, nestled beneath one volcano. Active volcanoes rumble away close by and the ground still shakes from time to time. But as the years roll by, these lessons of the past more and more become just another tale from the bygone days of Guatemala’s colonial past. 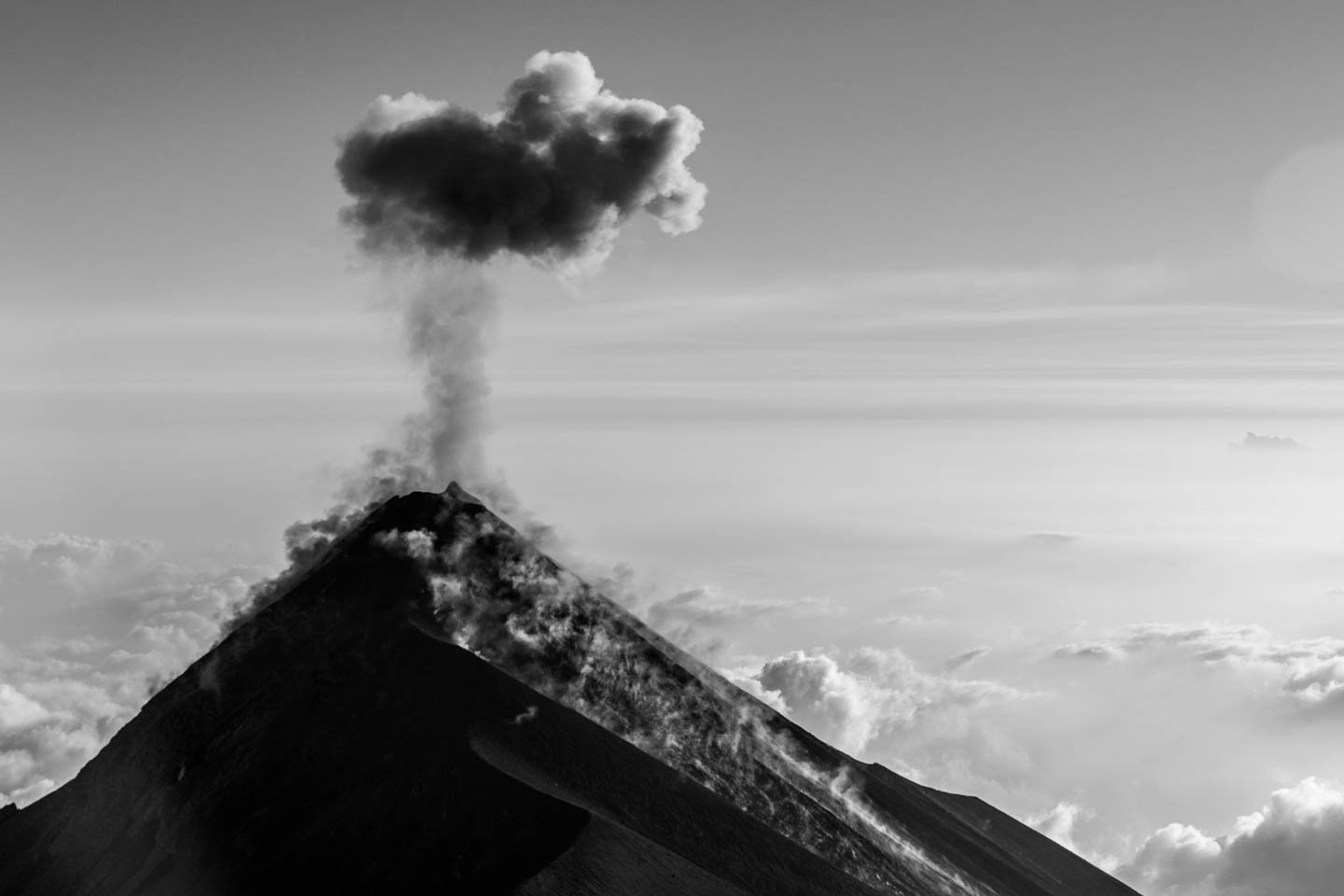 One day the New Zealand earthquakes of the early 21st century will become a legend of the past. People will forget. Our city will have its new iconic buildings. The past will fade from living memory and perhaps one day in the future a new generation will be taken by surprise by Mother Nature’s mood swings.