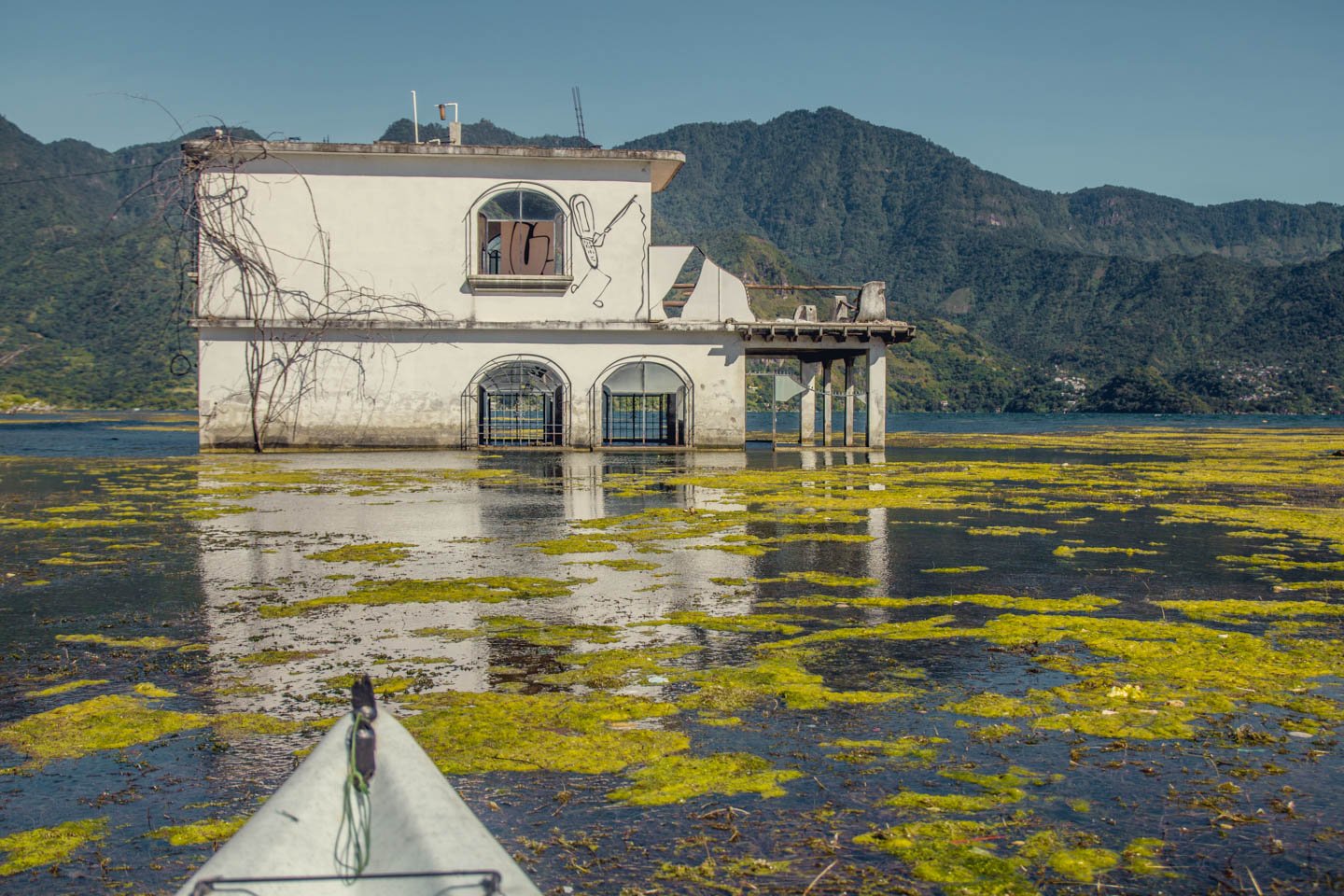 A life of travel is certainly not destined to be one of routine.

Since we were making reasonable progress in our Spanish classes and enjoying our time stopped in one place again, it wasn’t long before our time in San Pedro la Laguna stretched to eight weeks.

But it wasn’t all routine.

Some things did change as the weeks passed.

The cat got fatter. 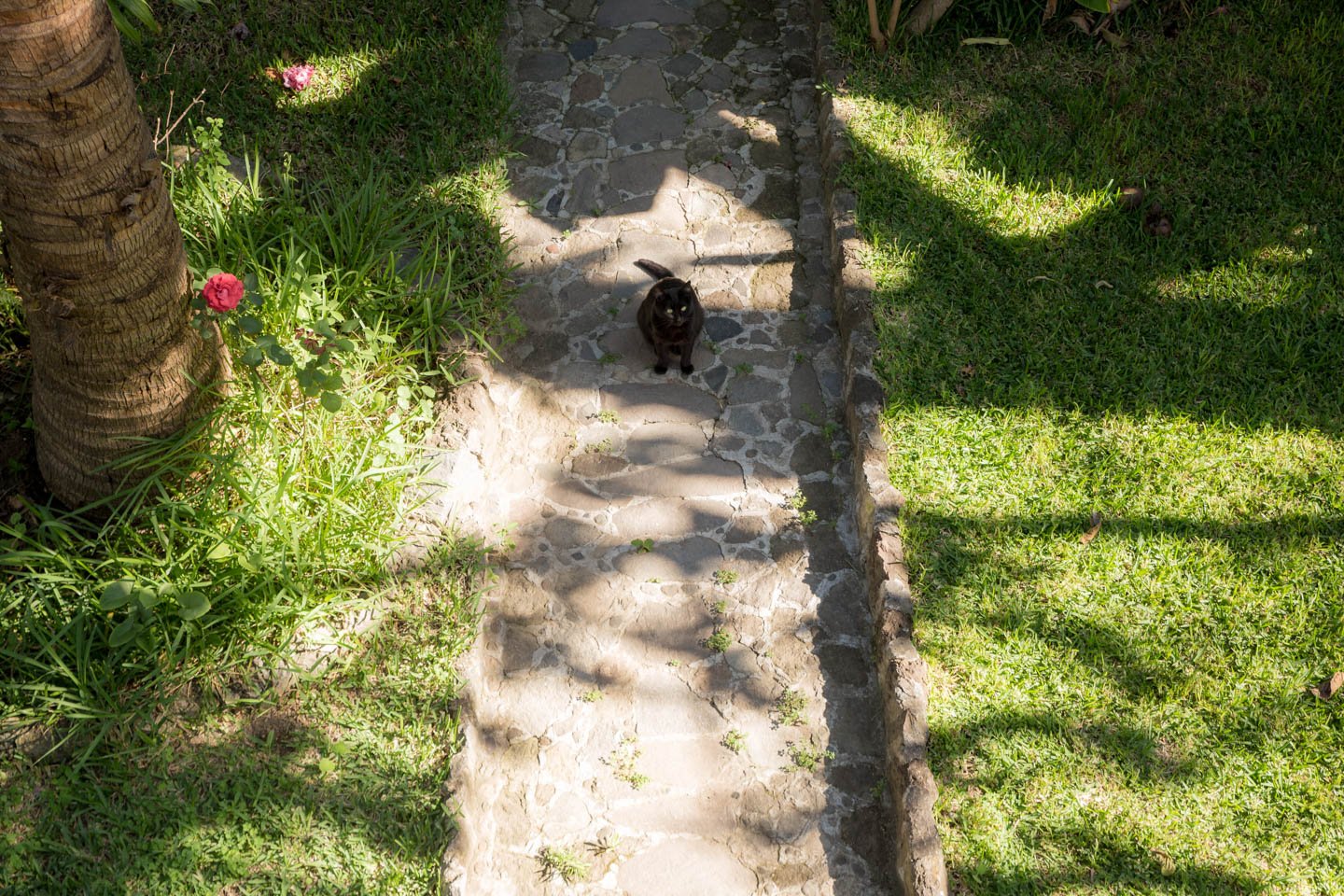 Hey Chubsy! You coming upstairs for a snack, or do you just want us to throw food down to you?

Other travellers came and went at the school.

We met Vikki with her ‘broccoli’ dogs. (Giant, friendly poodles). Don from Tennessee who planned to move to the area. He was trying to single-handedly clean up the lake, removing rubbish from the shallows in every waking moment. Nate, our downstairs neighbour who was probably feeding Cute-atron Unstoppable as much as we were.

There were also breaks in the routine to keep things interesting.

Sometimes the power went out. 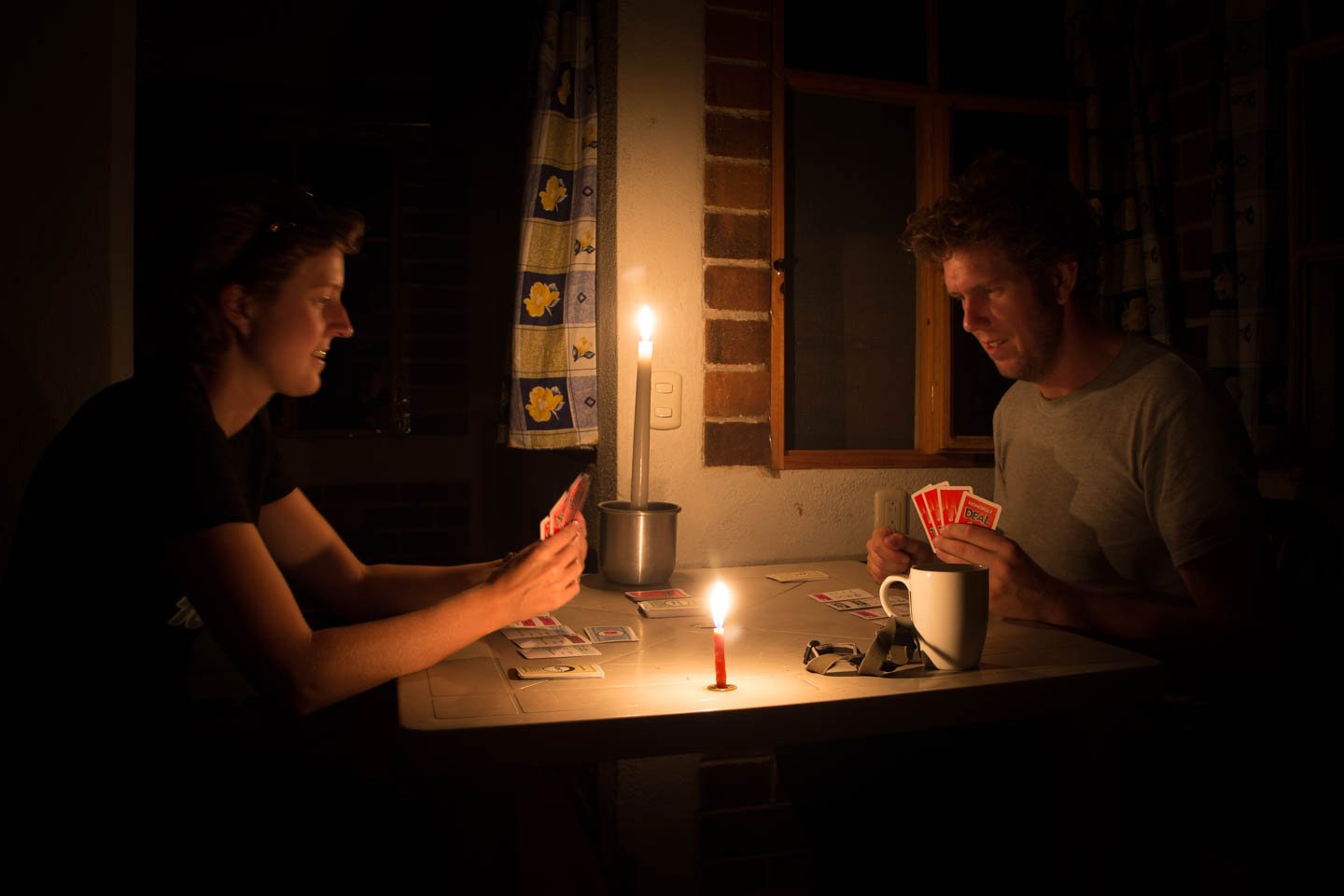 We took boat trips to various other towns around the lake.

One morning we woke up at an ungodly hour in order to walk up the side of a volcano. However we do feel like the ridiculously early morning departure was worth the effort.

Even Emma managed reach a status of fully awake prior to breakfast with views from the top like these: 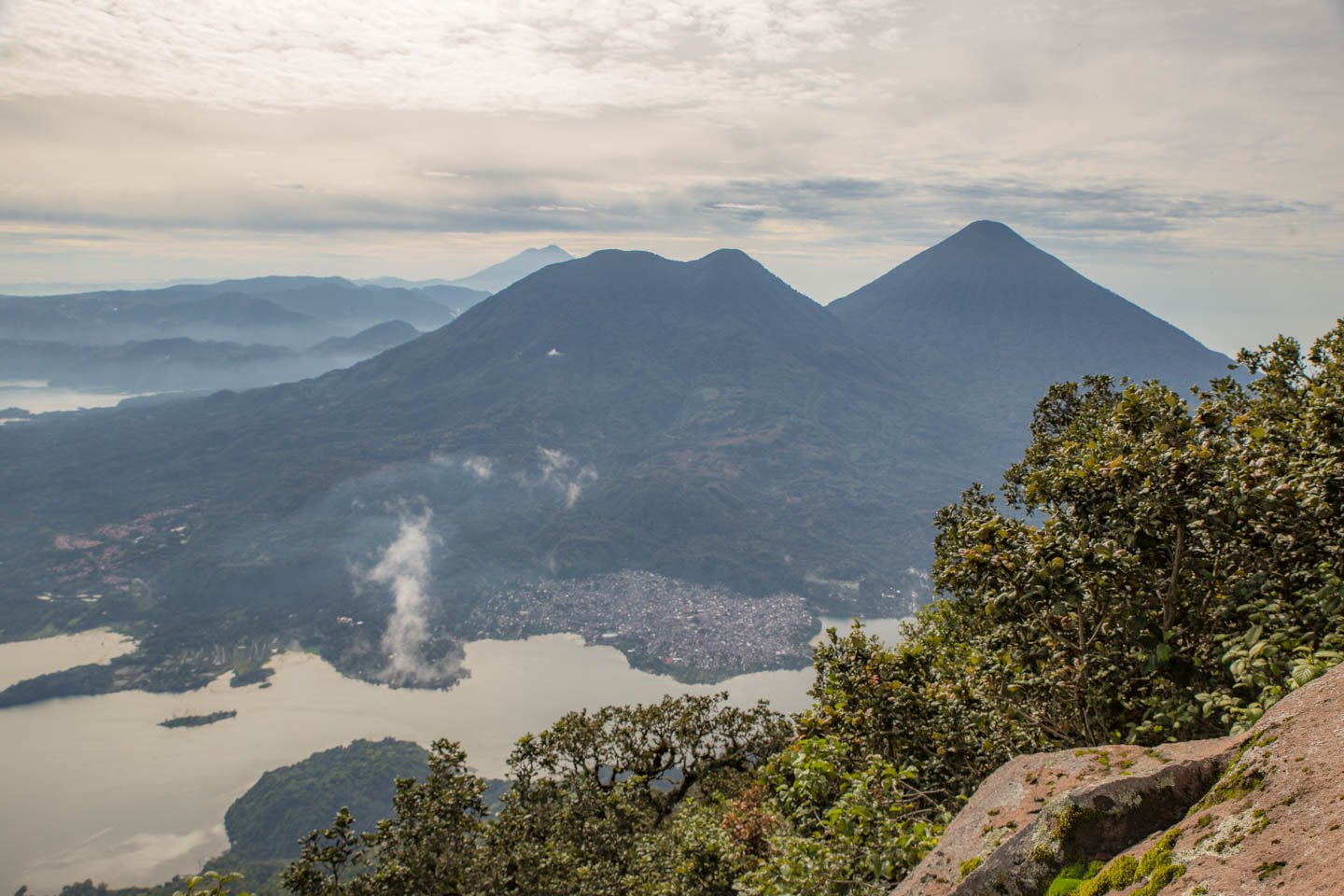 Wandering through the thick tangle of vegetation on the steep mountainsides was almost as memorable as the view from the top. 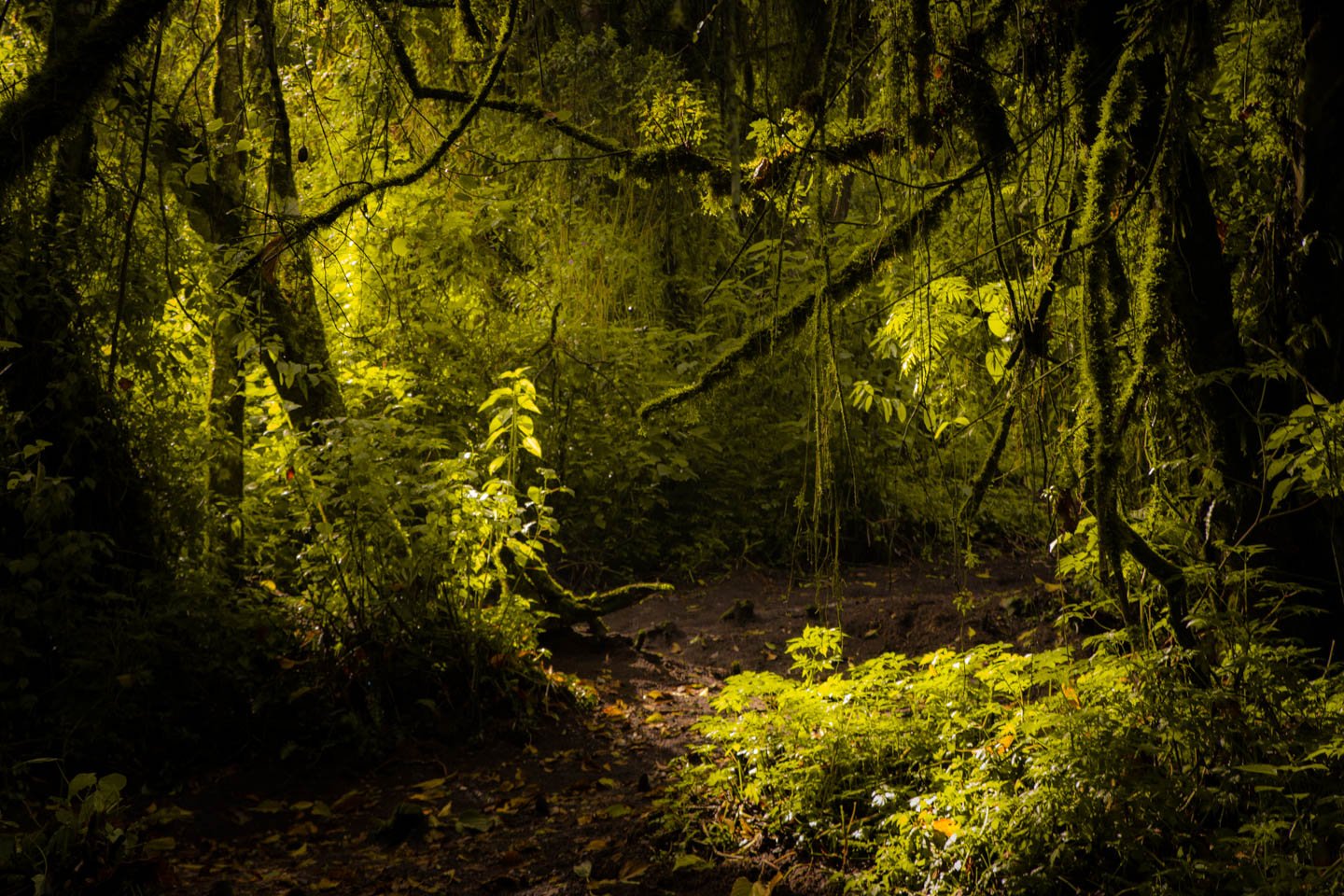 Another memorable experience from our time in San Pedro la Laguna was the weekend of the Day of the Dead festivities.

We had considered returning to Oaxaca, Mexico to experience the events surrounding Día de Muertos there. Oaxaca is reported to be home of some of the biggest Day of the Dead festivities in all of Mexico. However the combination of being in the midst of our Spanish classes and the 4Runner no longer wanting to start helped us make the decision to stay put.

Día de Muertos isn’t quite as big a deal in Guatemala as it is in its northern neighbour, but it still represents an important local festival.

The final day of this three day event is a time for families to remember their loved ones—in style. The cemetery is lit up brightly, the air filled with the sounds of live marimba music and fireworks. The party is in full swing. Smoke from these fireworks mixes with the aromatic clouds of smoke wafting from street food vendors,  burning candles and incense. It is a lively scene. Once the sun sets, the cemetery is so full that the crowd moves as one. A slow-moving shuffling mass making its way through the graves.

Some families sit solemnly by memorial photos of loved ones, standing in silent vigil. While others sit around drinking, laughing and joking about stories of their passed ancestors. But for everyone this is a time of  something a bit more than remembrance. A time to strengthen the ties to family members that have passed on. A time not just to keep the memory alive, but to live the memory and reflect on how these people’s lives are still very much a part of who those left behind are today.

It is a far different atmosphere than you are ever likely to experience in any cemetery in New Zealand. 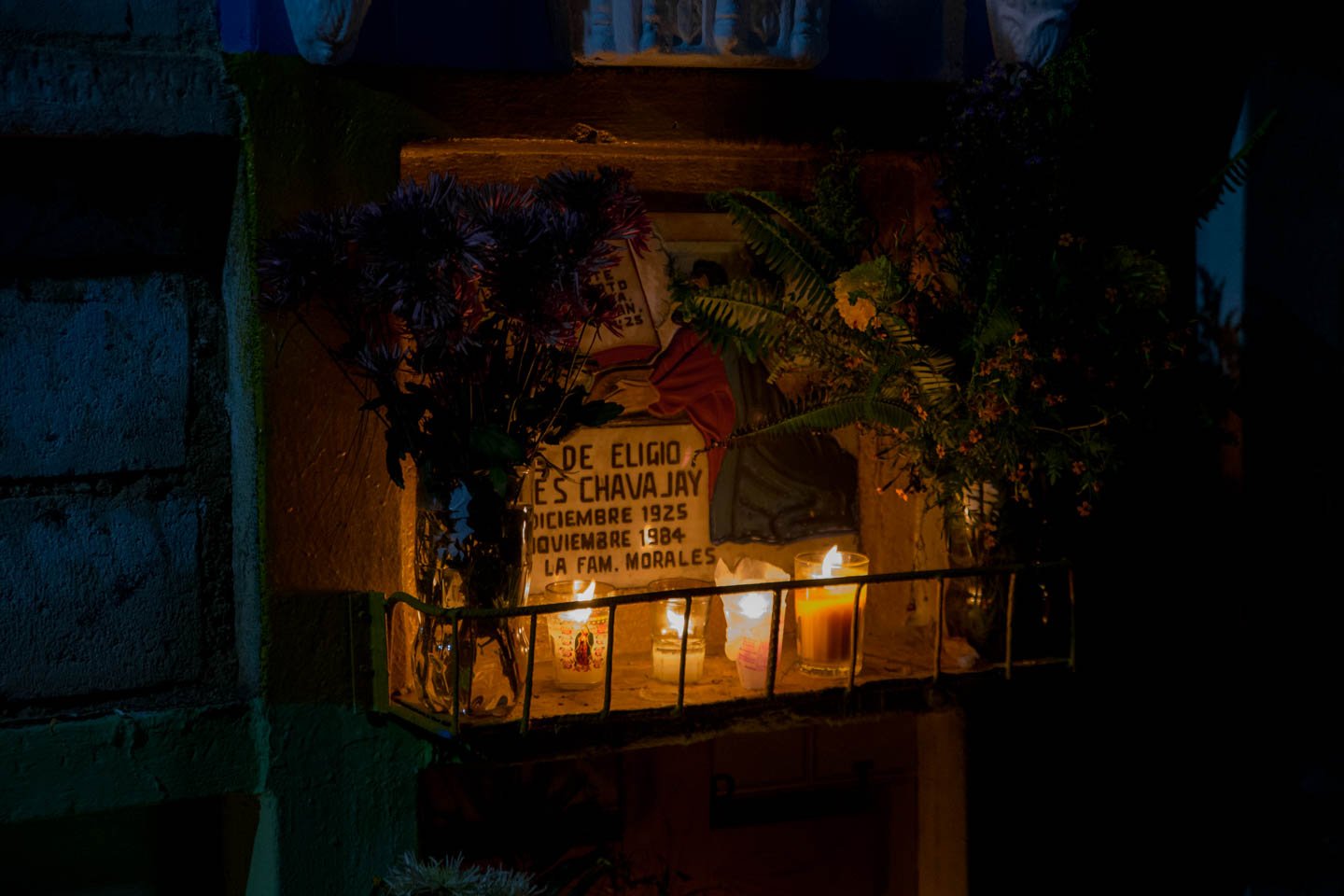 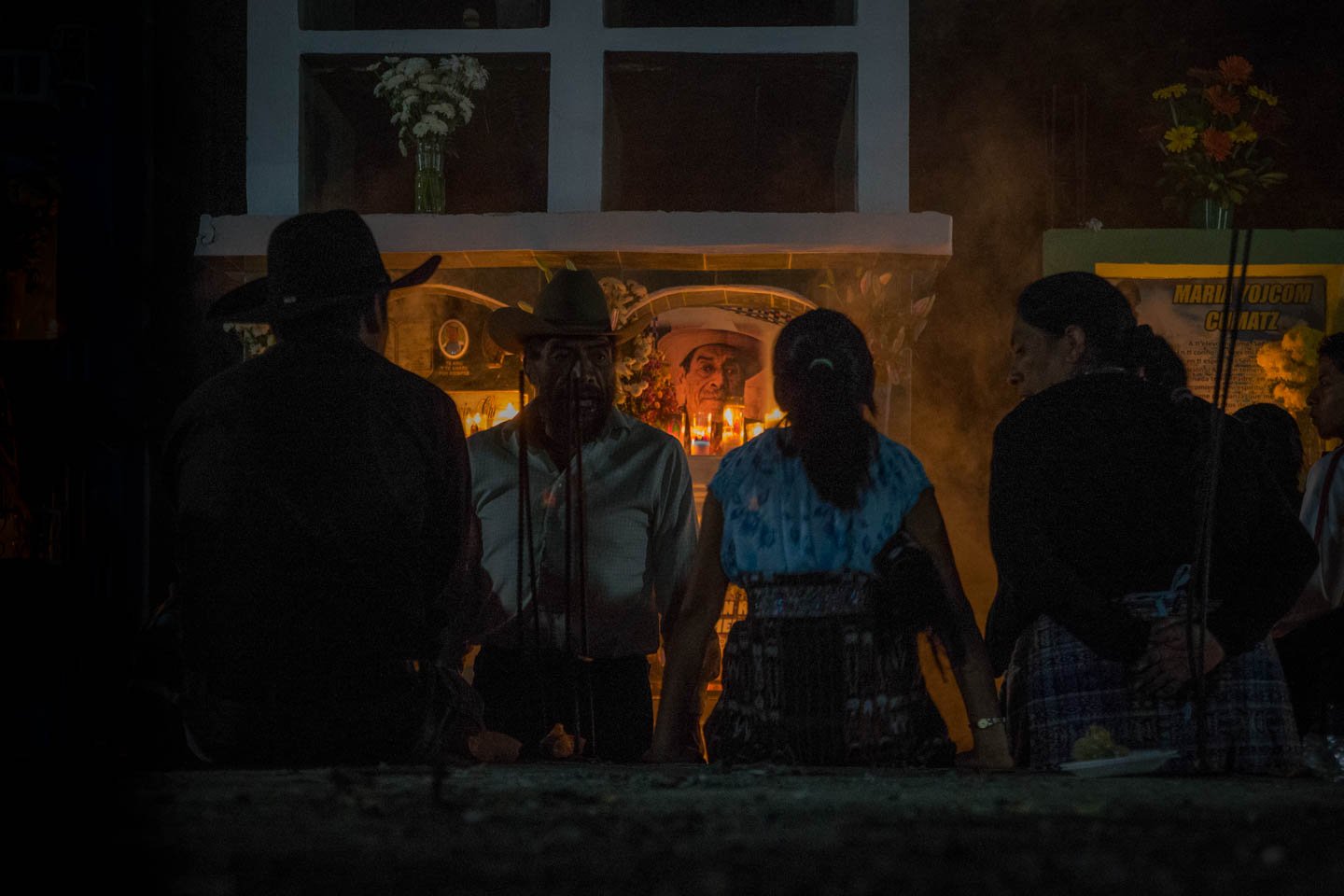 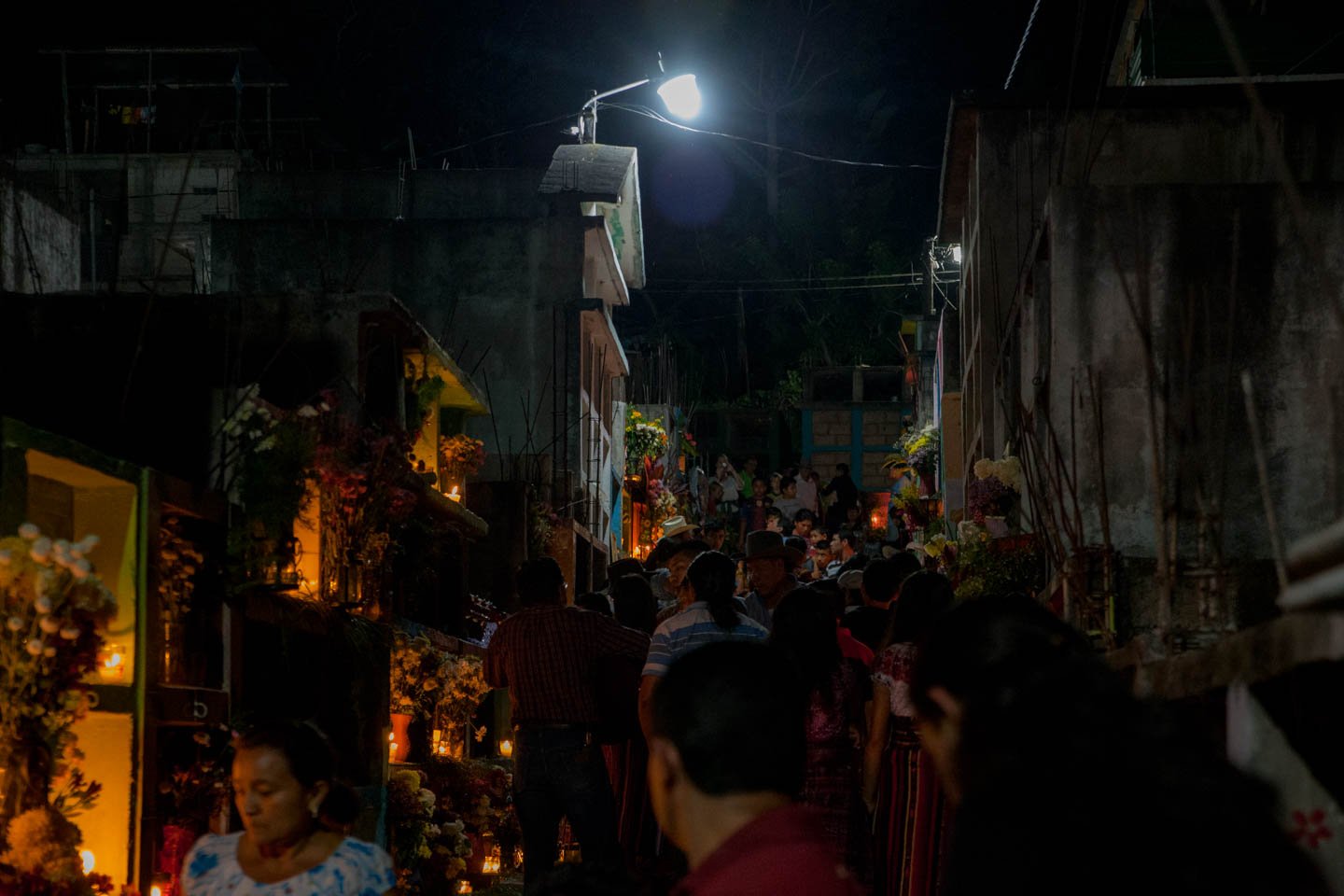 Another famous feature of Guatemala’s interpretation of the day of the dead festival is the giant kite festival. (Both the festival and the kites are giant).

However, since our 4Runner wasn’t starting, we opted to dog-sit for some friends who were going to this kite festival.

As a result. Here are some photos of the victim of our dog sitting instead of photos of large kites.

If you feel like you missed out, there’s a page about it on Atlas Obscura.

If big kites aren’t your thing, here for your viewing pleasure is a dog. 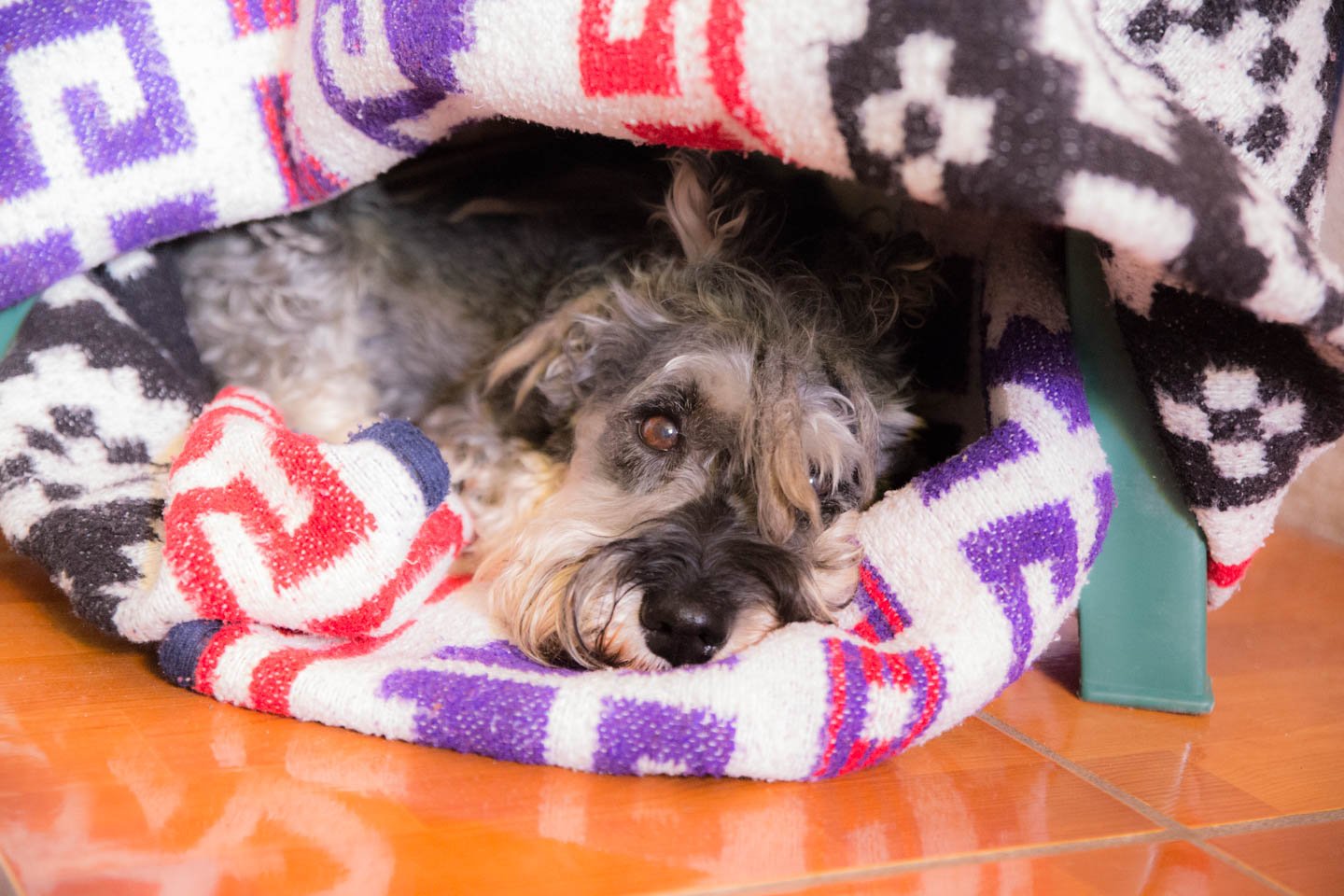 Meet Atreyu. Probably the only Schnauzer with a dreadlock-mohawk we will ever meet. He is scared of fireworks. It is for this reason that we built him a fort out of a blanket and a chair. 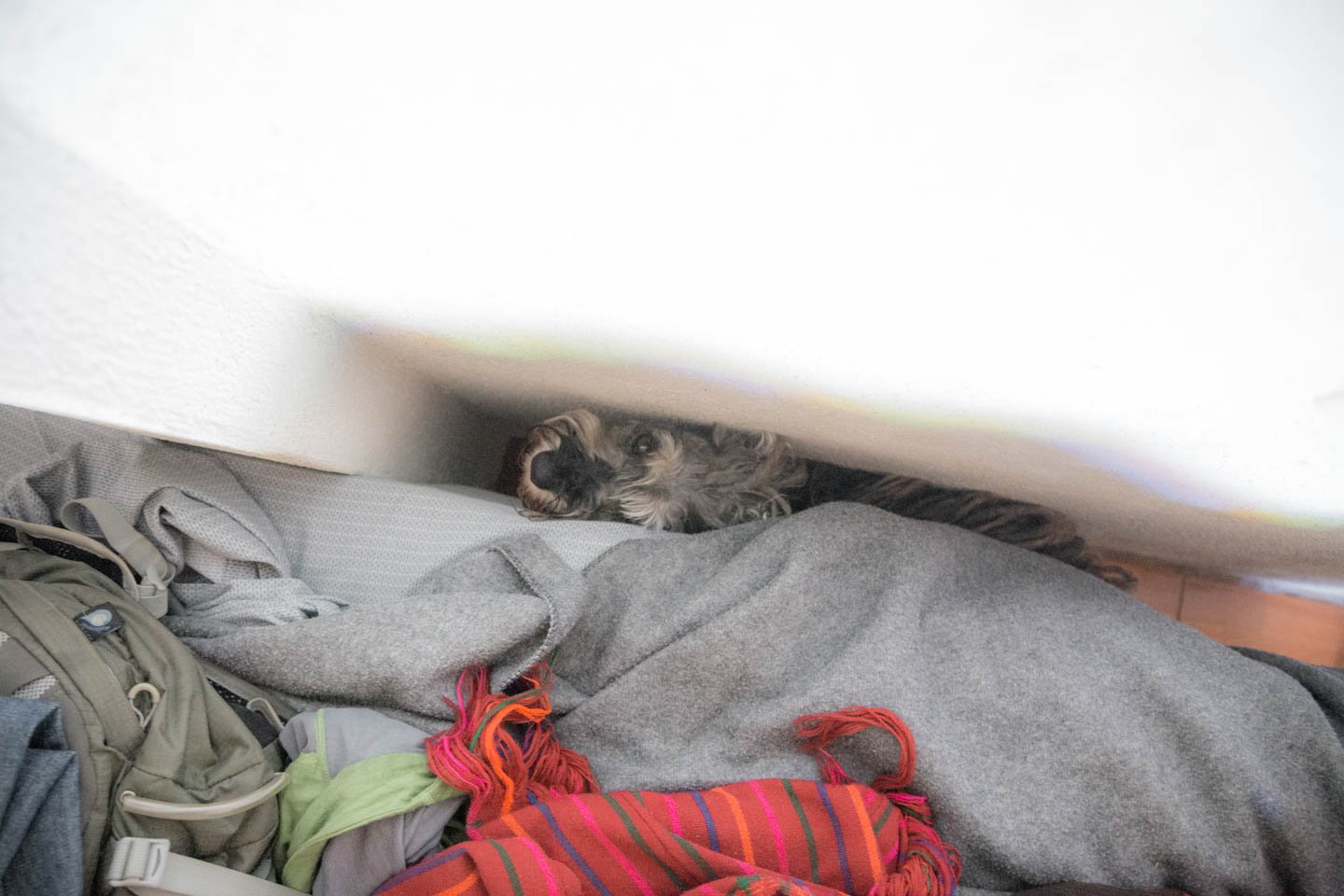 The fireworks continued for a while.

Poor Atreyu wasn’t sure about these strange Kiwis who had abducted him for the day.

We thought taking him out for a nice lunch might cheer him up. Bring on Smokin’ Joes all you can eat BBQ. Once he’d had a decent plate of BBQ. 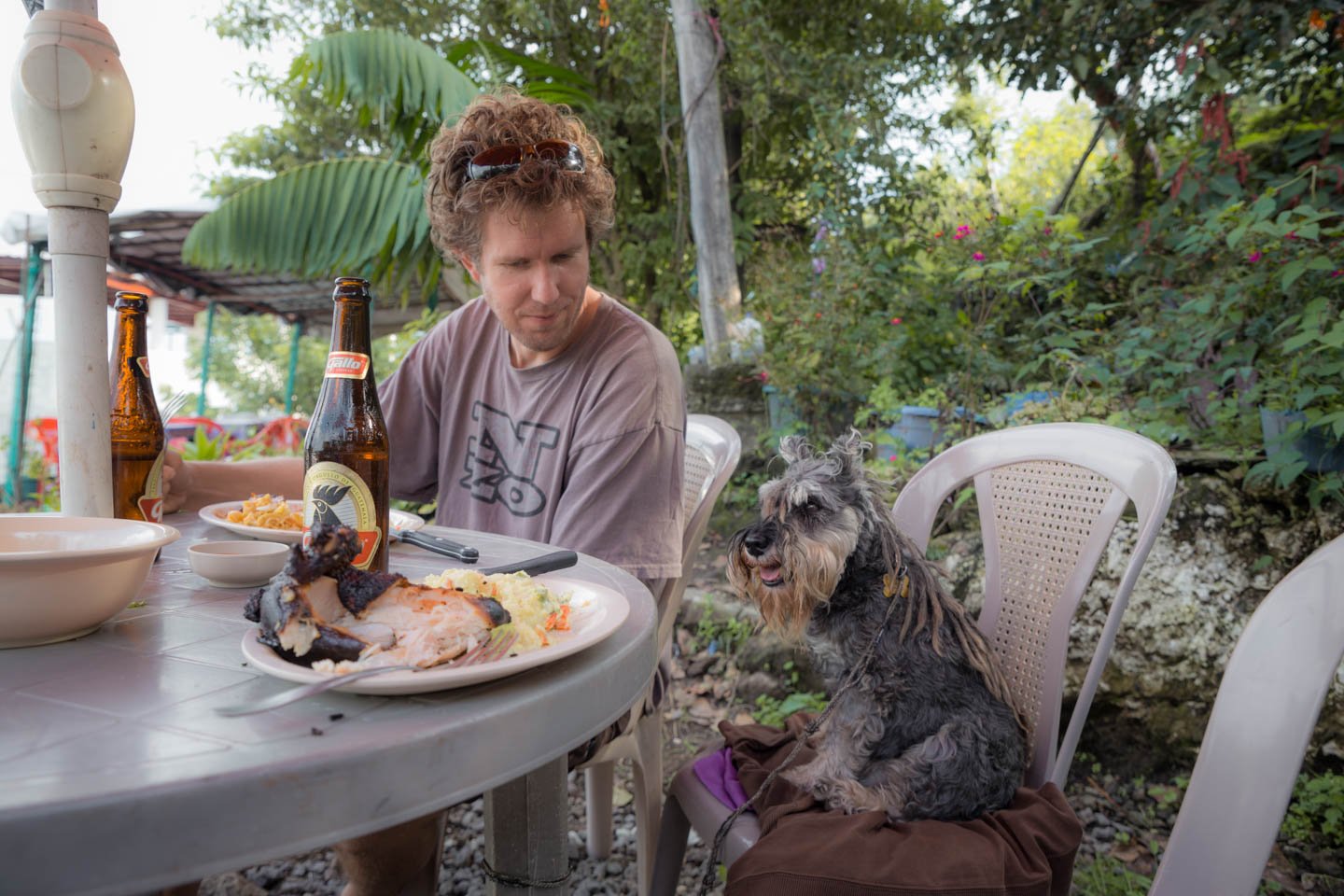 And a few beers. 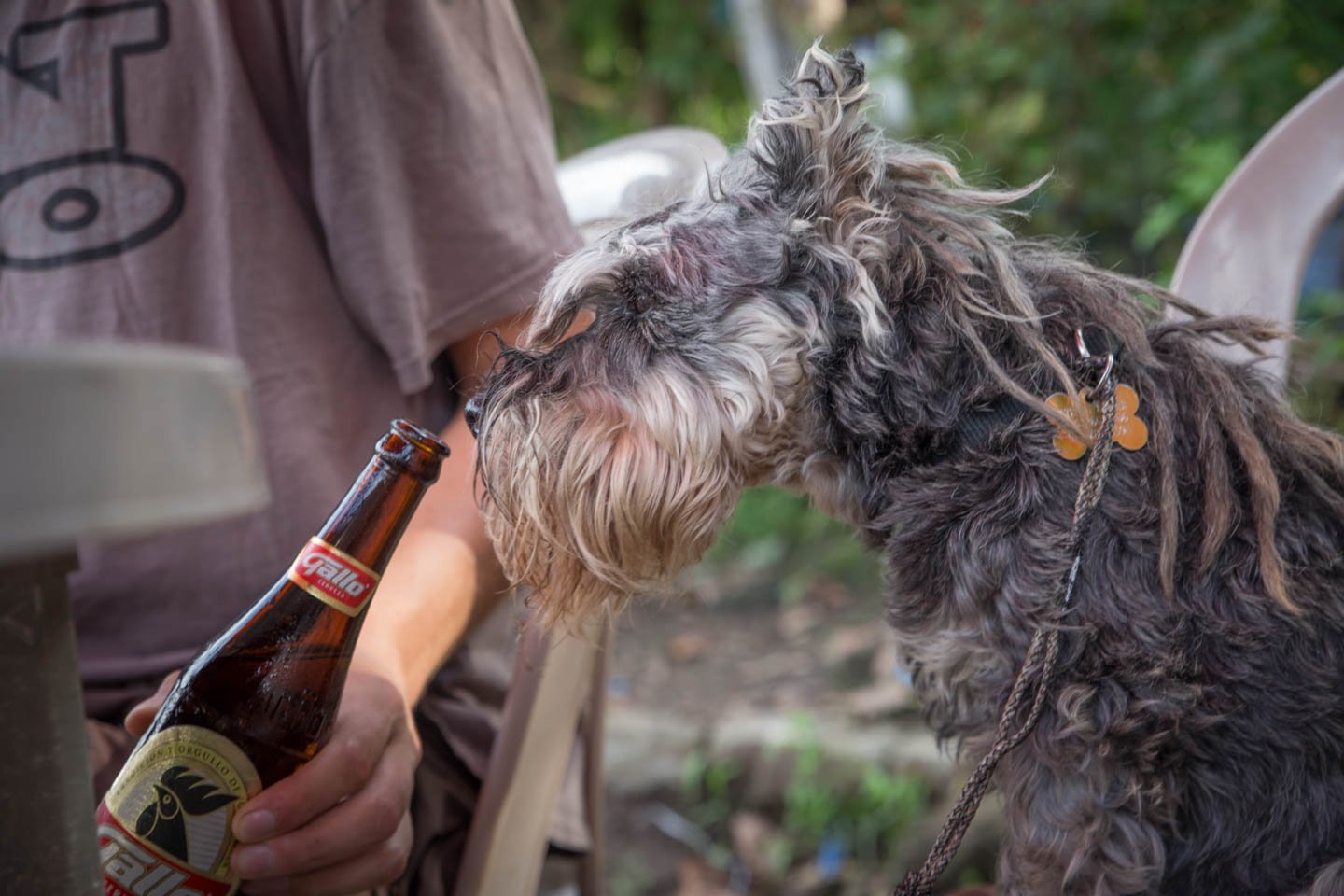 He was all smiles. 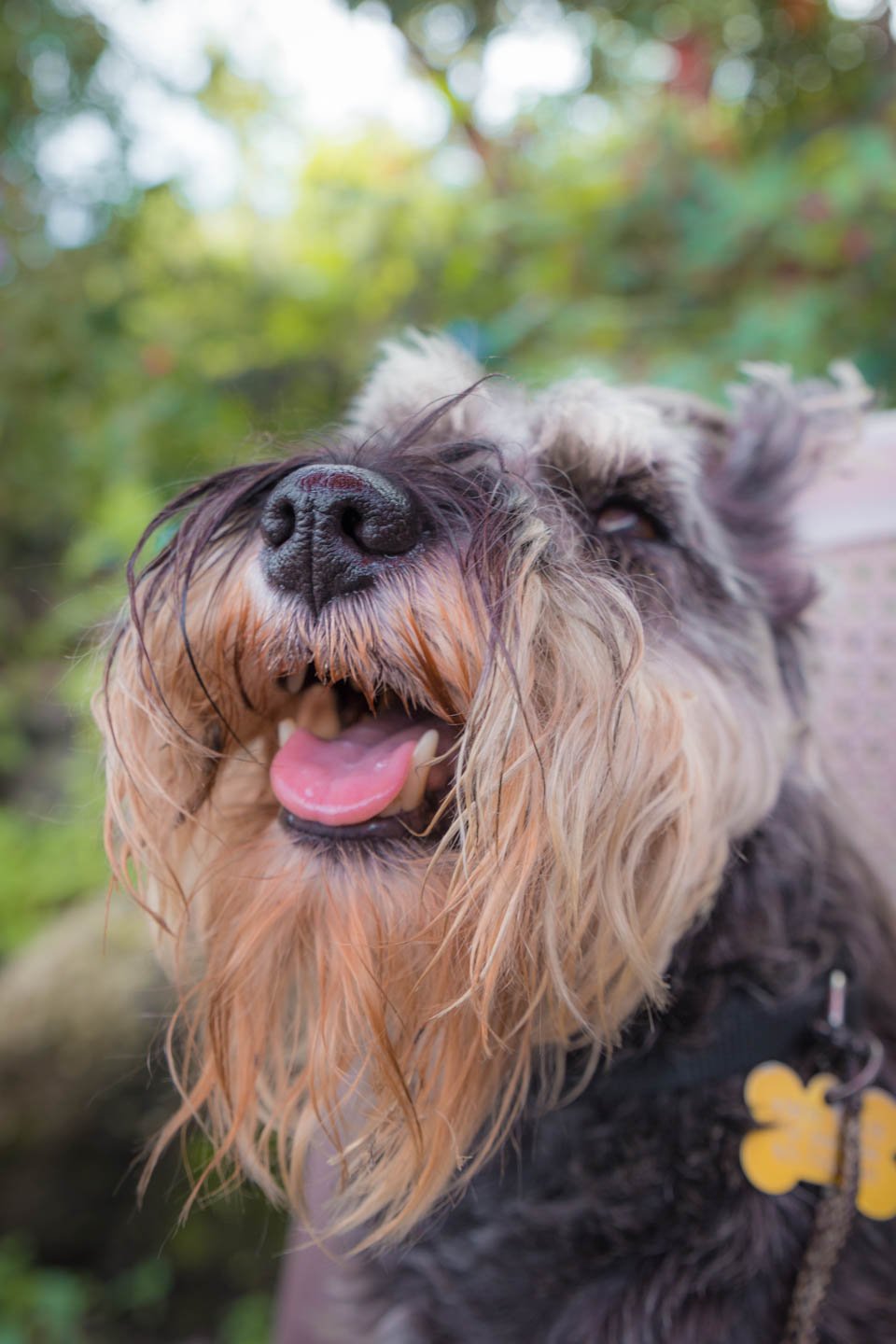 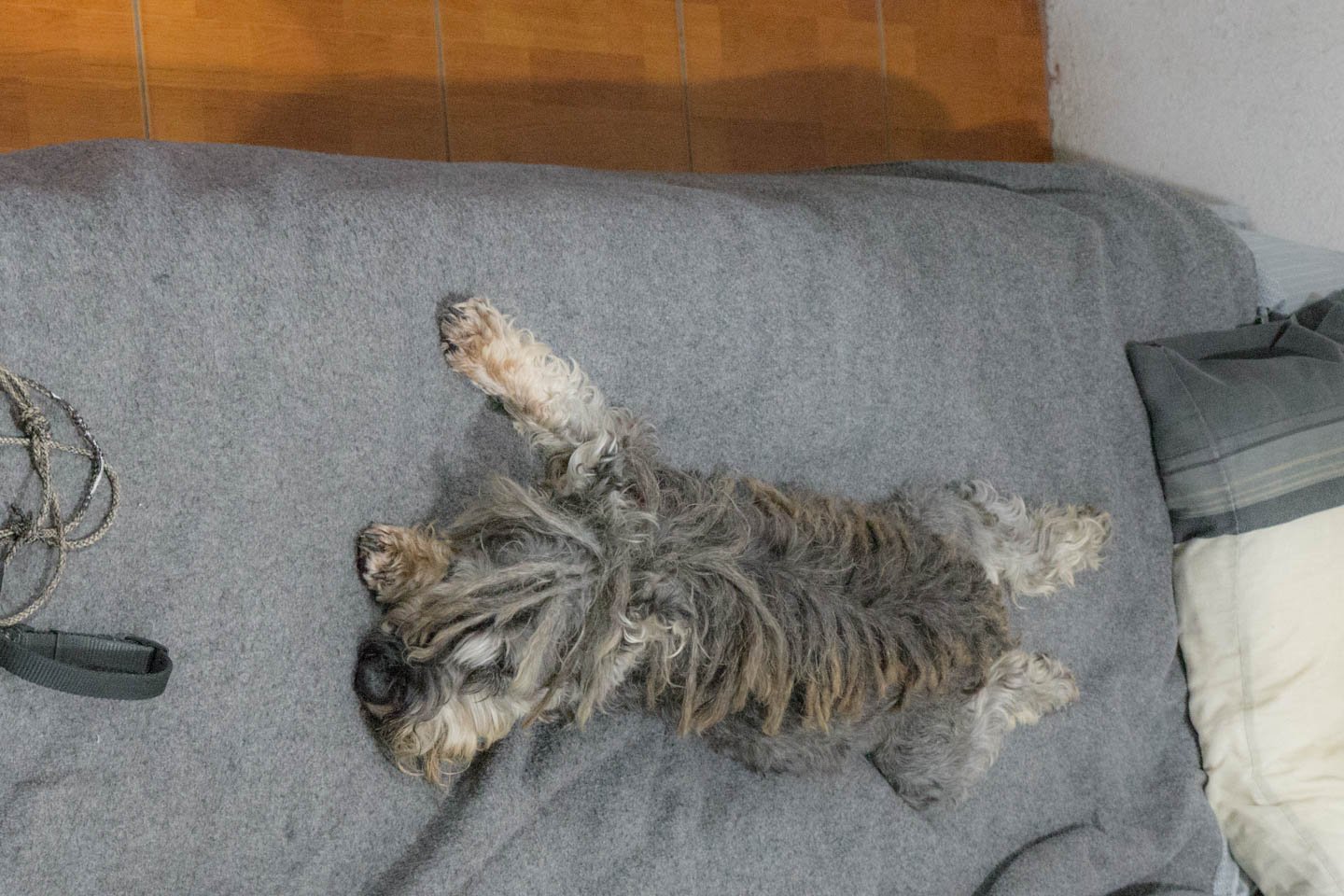 There was even more to see on the water. Although sharing a kayak involves a bit too much co-operation for the Kiwis, we still managed to enjoy a quick paddle around some sunken houses near the shore.

Rising lake levels have provided an obstacle course of archways, homes, gates, trees and even the odd basket ball court to explore by kayak.

The lake has, however become home to an invasive algal bloom in recent years. This provides a bit of shelter from the afternoon swells, but the vast tangle of alge makes it more like paddling through setting concrete than water. The wandering water birds who walk on the weeds just below the surface make it look easy, but the paddles really do get tangled.

The streets of San Pedro were not covered in algae that required avoiding. Instead it was peanuts and sleeping street dogs. Sometimes all in the same spot, since both benefit from an afternoon in the sun. 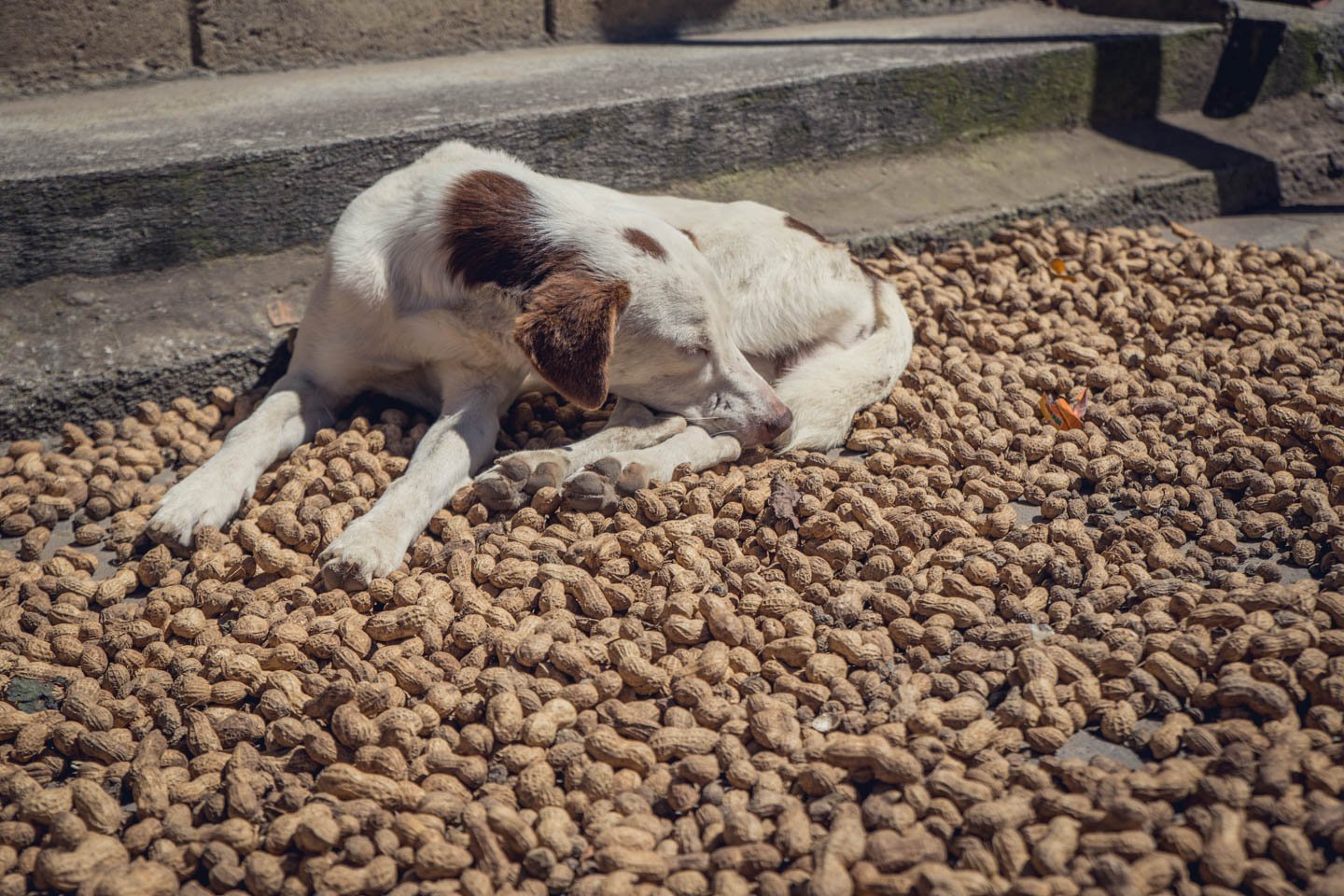 The peanuts, the spoils of the recent harvest, are left to dry in the hot afternoon sun.

The time came for us to leave.

We had been studying Spanish for eight weeks, our heads were full (as were our bellies, after nearly two months of home-cooked meals). It was time to finally venture on to something new.

It was with great sadness that we said goodbye to Corazón Maya. The school had become to feel like home. We had spent hours talking to, laughing with and learning from our teachers and now we were being released into the wild. To try our Spanish on the unsuspecting population of Latin America as we followed the road south to Ushuaia.

We were also sad to say goodbye to Cute-atron unstoppable. We missed having pets and even though she was an independent visitor who came and went as she saw fit. We fed her when she meowed, provided shelter when it rained and worried when we hadn’t seen her for a few days. She had begun to feel a bit like a part of our family. 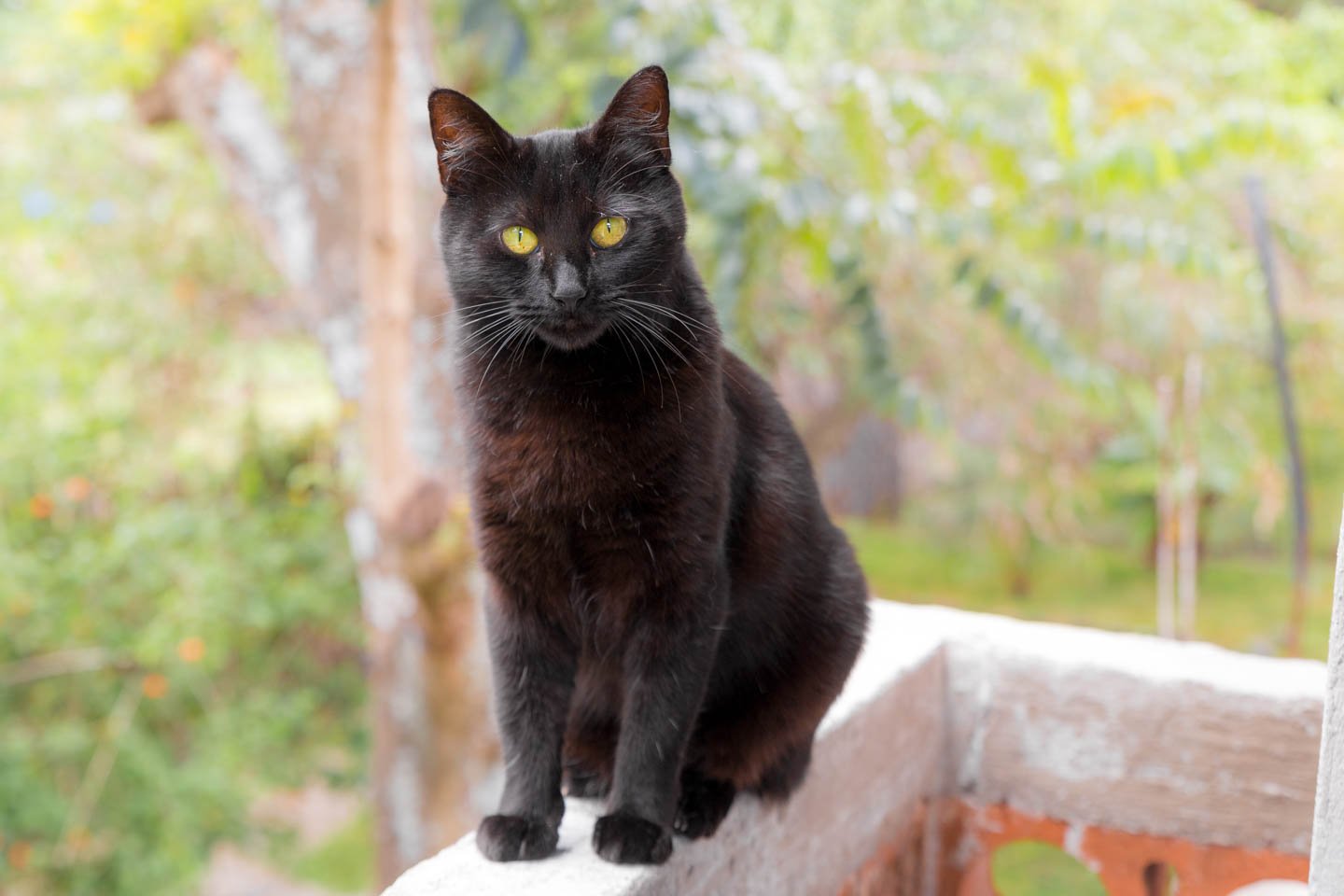 Of course, Cute-atron Unstoppable wasn’t quite as sad to see us go. We left her snoozing near a bag of cat food on the front porch of our downstair-neighbour Nate’s apartment. We felt confident this cat would miss us a lot less than we would miss her. 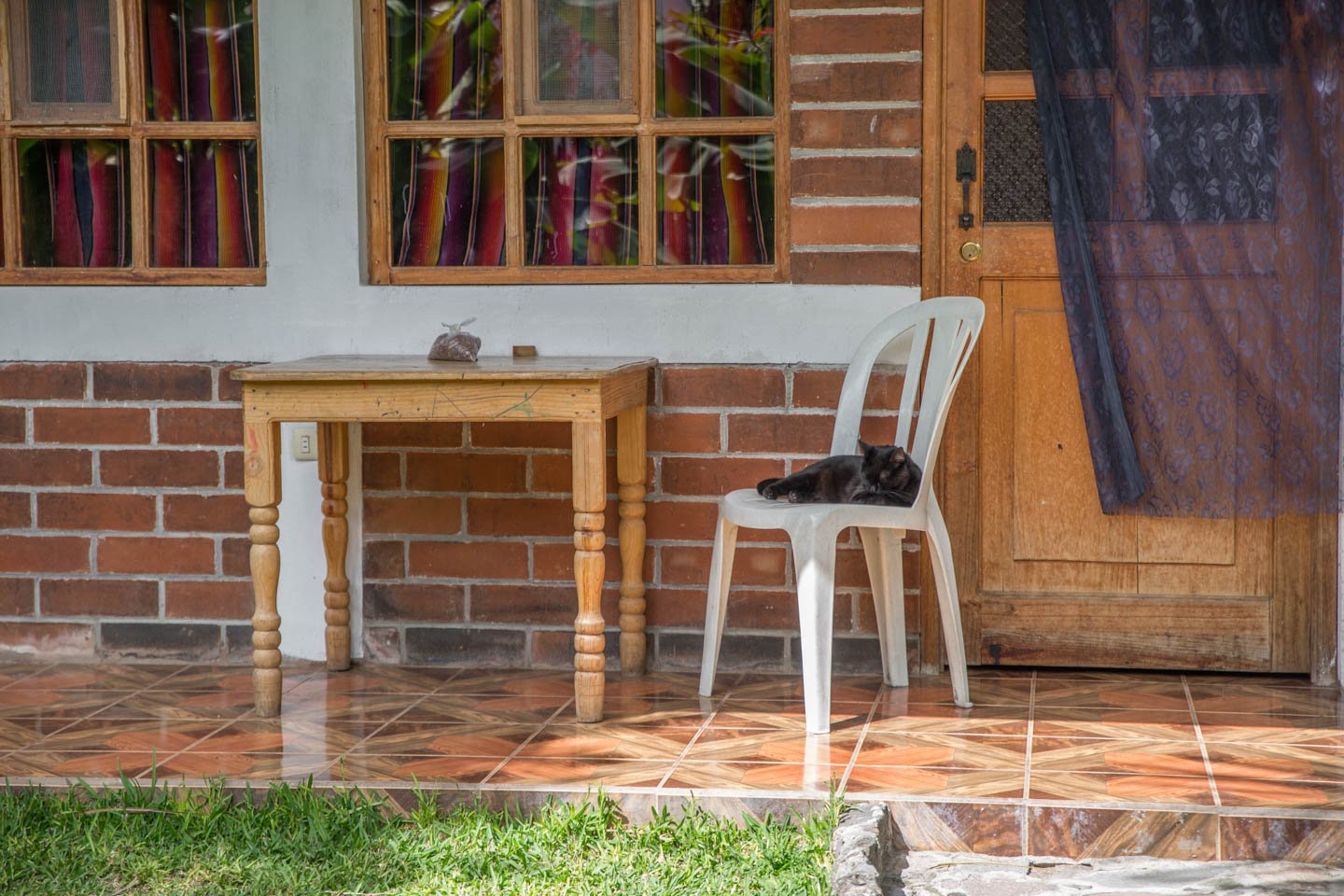 We couldn’t quite bring ourselves to leave the lake area immediately. Before embarking on the steep and treacherous road back to the mountains above we drove back around the shore to San Marcos to spend a few days relaxing on the shore of Atitlán in our campsite, with a view to remember.

*Sheri and John. Promise we didn’t really feed any beer to Atreyu, he was much more interested in the BBQ. Mostly, he just naturally warmed to our irresistible charms.