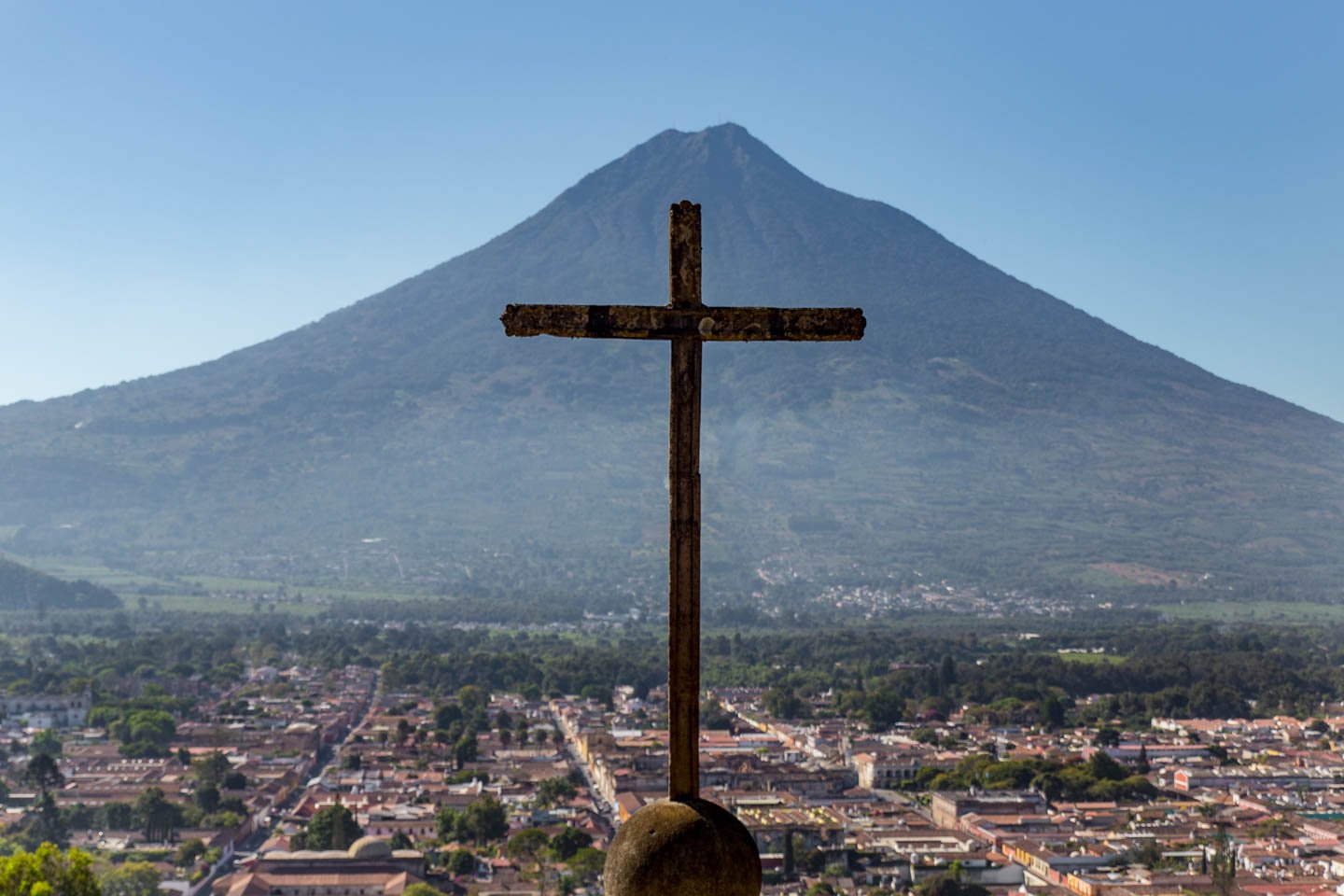 Partly because we were awaiting respectable weather for climbing the nearby volcanic peak of Acatenango. Mostly because there was a lot of really tasty food.

This is our kind of shop!

And our kind of lunch.

Don’t mind if I do—the local beer/sandwich shop served these with the cheque.

Antigua is a colonial city (the former capital of Guatemala) built in the shadow of several volcanoes.

The enormous Volcán de Agua towers above the city’s streets, the nearby peaks of Acatenango and Fuego were prominent features in the surrounding mountain range. The sight of constantly grumbling Volcán Fuego, spewing out lava and smoke from the city’s streets is one of the most spectacular sights to see.

Or at least that’s what we were told. 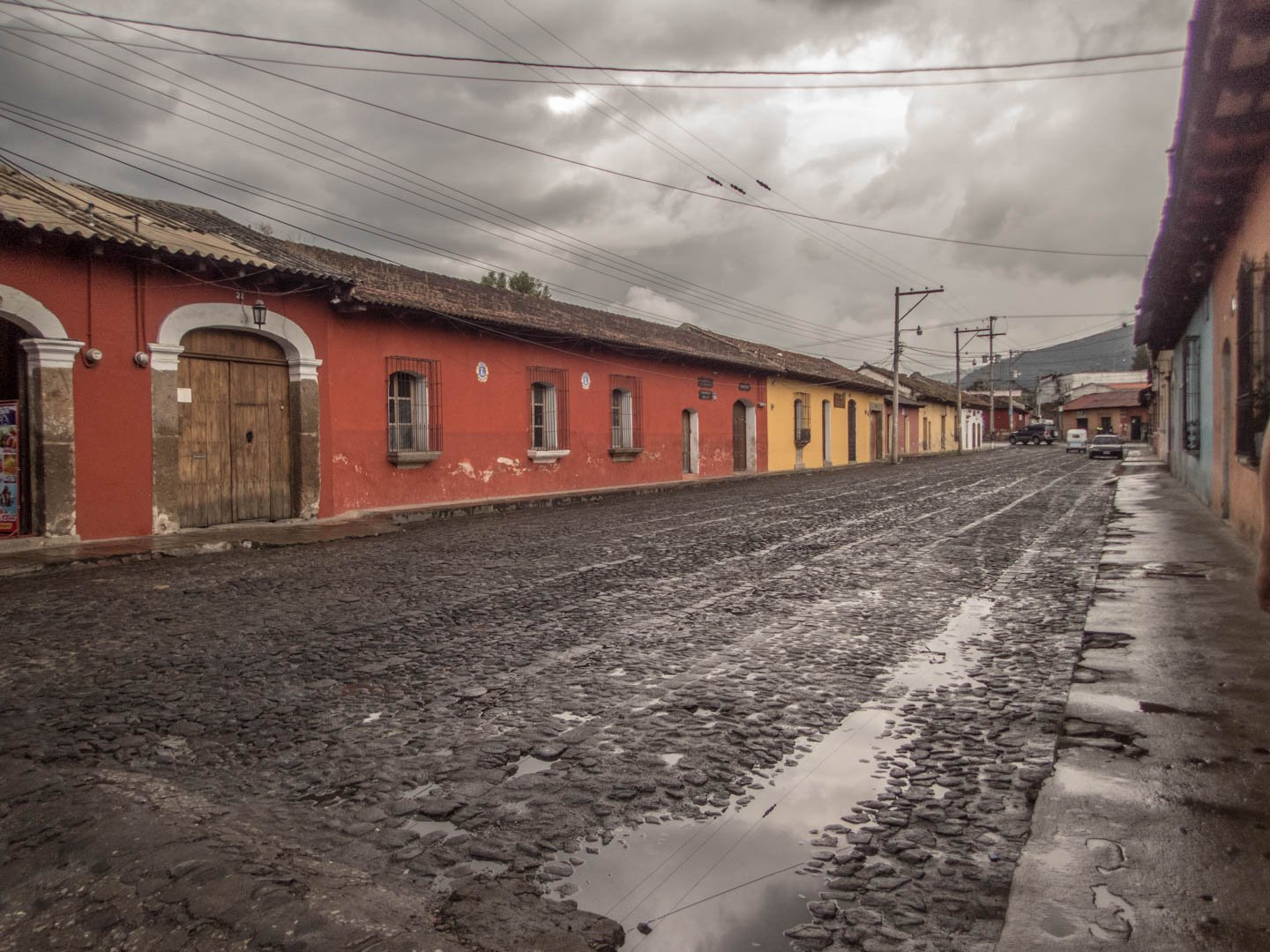 Cobbled streets on a rainy afternoon.

The cloudy skies made it challenging to confirm these rumours. We had spent the best part of two months in and around Antigua, and had seen nothing to substantiate these claims.

We had observed a range of cloud types though. From towering ‘cumulonimbus’, to dense ‘stratus’ and fluffy white ‘cirronimbu-no-volcanoes-for-you-strato-haze’. We had seen a lot of things in the skies above that were not volcanoes. 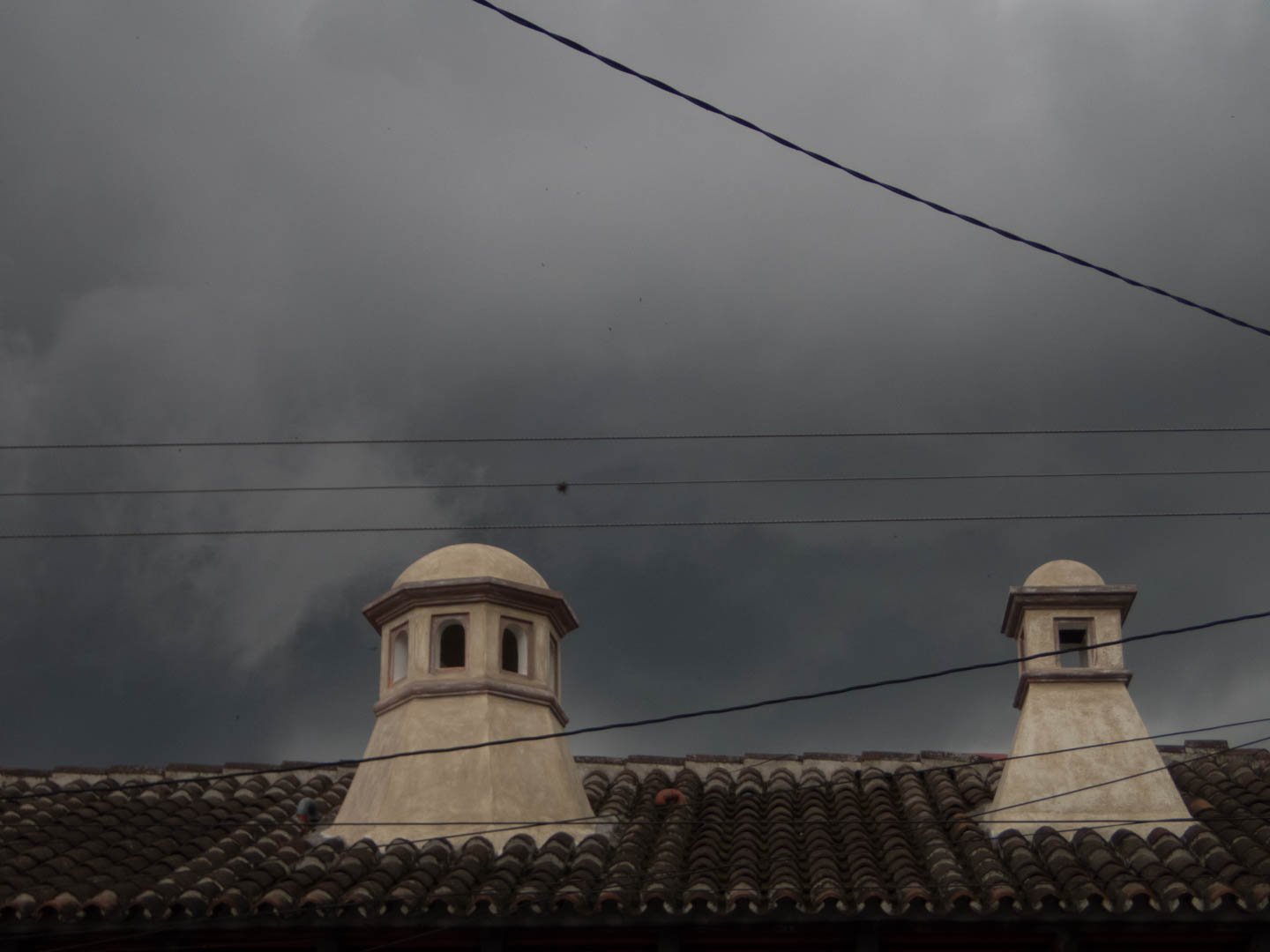 For much of our time in the town, the skies were a mournful shade of grey. Luckily, the streets of Antigua were anything but.

Antigua is a tapestry of vibrant colour. Vendors lined the streets selling all kinds of bright fabric creations.

Everywhere we looked there were vibrant, colourful vistas. There was often so much happening that we would completely forget that we were meant to be seeing volcanoes.

Sometimes the clouds would clear and we’d see patches of bright blue skies above. The sunlight would highlight the rainbow-coloured facades of the colonial buildings and this vibrant town would seem even brighter than usual. 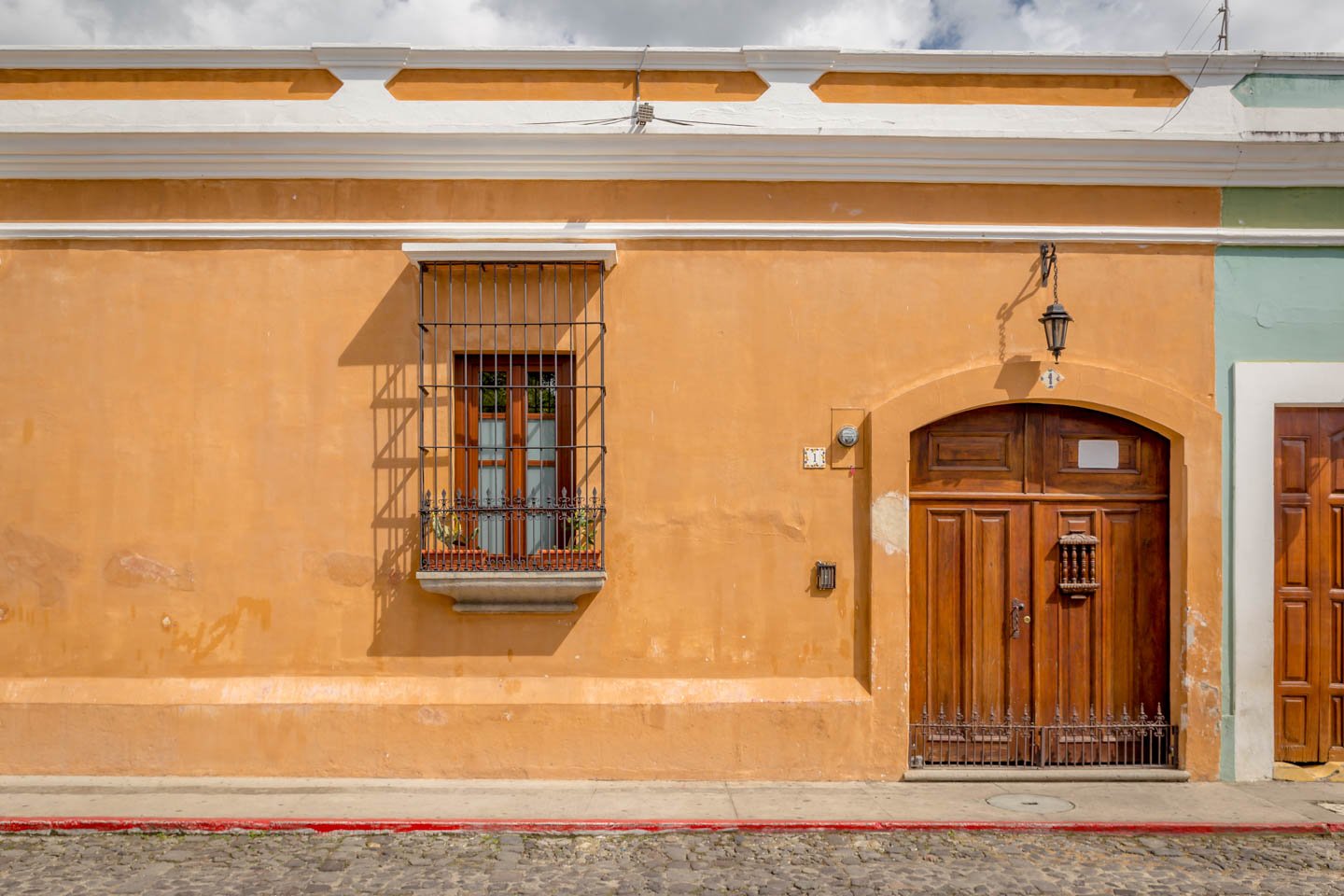 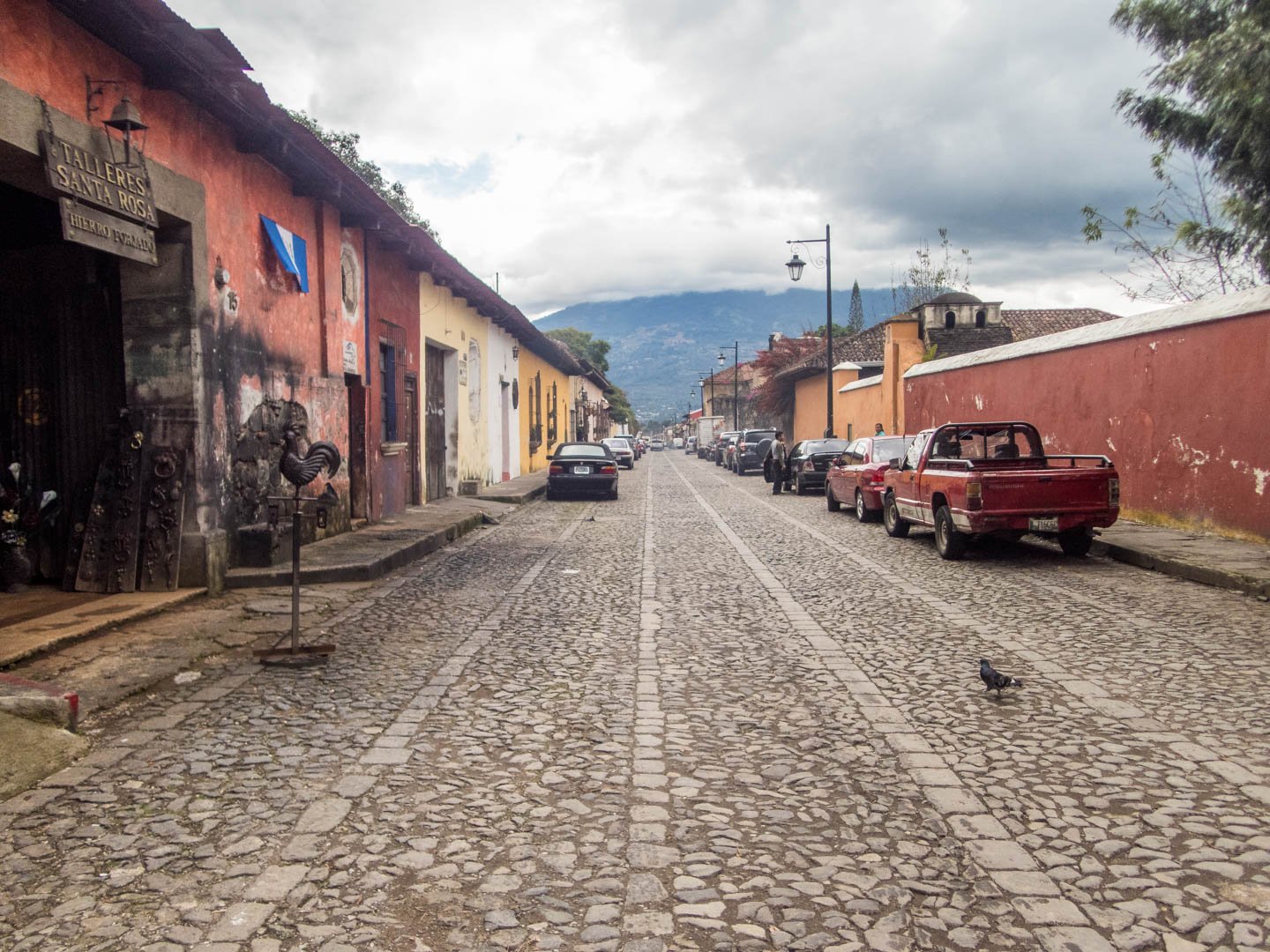 Ok. We can see you Volcán de Agua. We know you are behind that cloud. It’s pretty obvious.

On one occasion we were exploring the crumbling ruins of a church, there was an abnormally large amount of blue sky. 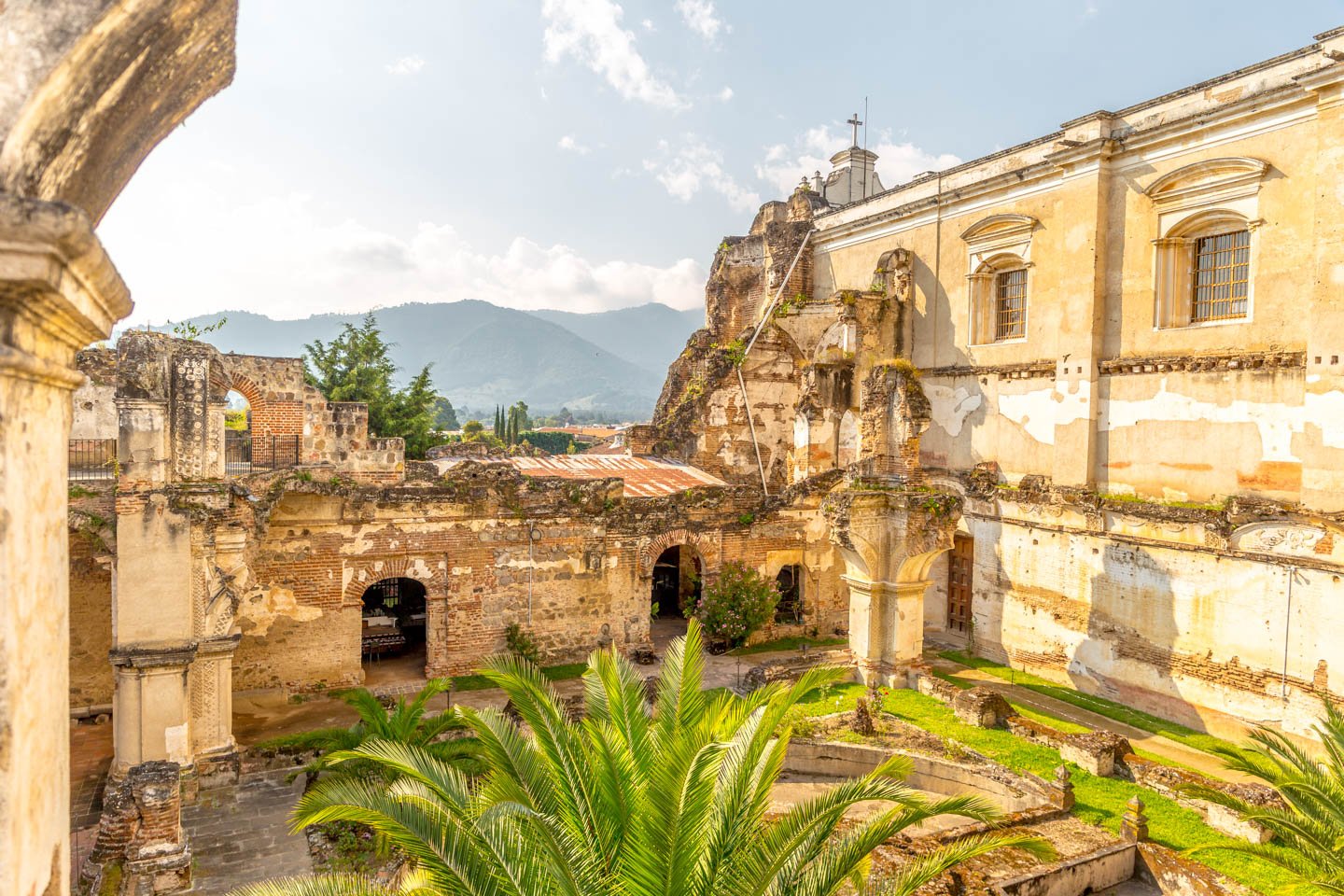 Look at those clear skies, surely those pesky volcanoes will show themselves today.

Despite the sunny skies above, any volcanic vistas were, as usual, hidden. This time behind just a smattering of fluffy white cloud. Barely enough to cover the peaks.

Now we were pretty certain that the volcanoes existed, but were lacking any confirmed photographic evidence.

As we gazed out an empty stone window frame, the cloud shifted for a second. Did I just catch a glimpse of the peak of a volcano? As quickly as it appeared, it was gone. A vision of a hopeful dream of a volcano. Nothing more. 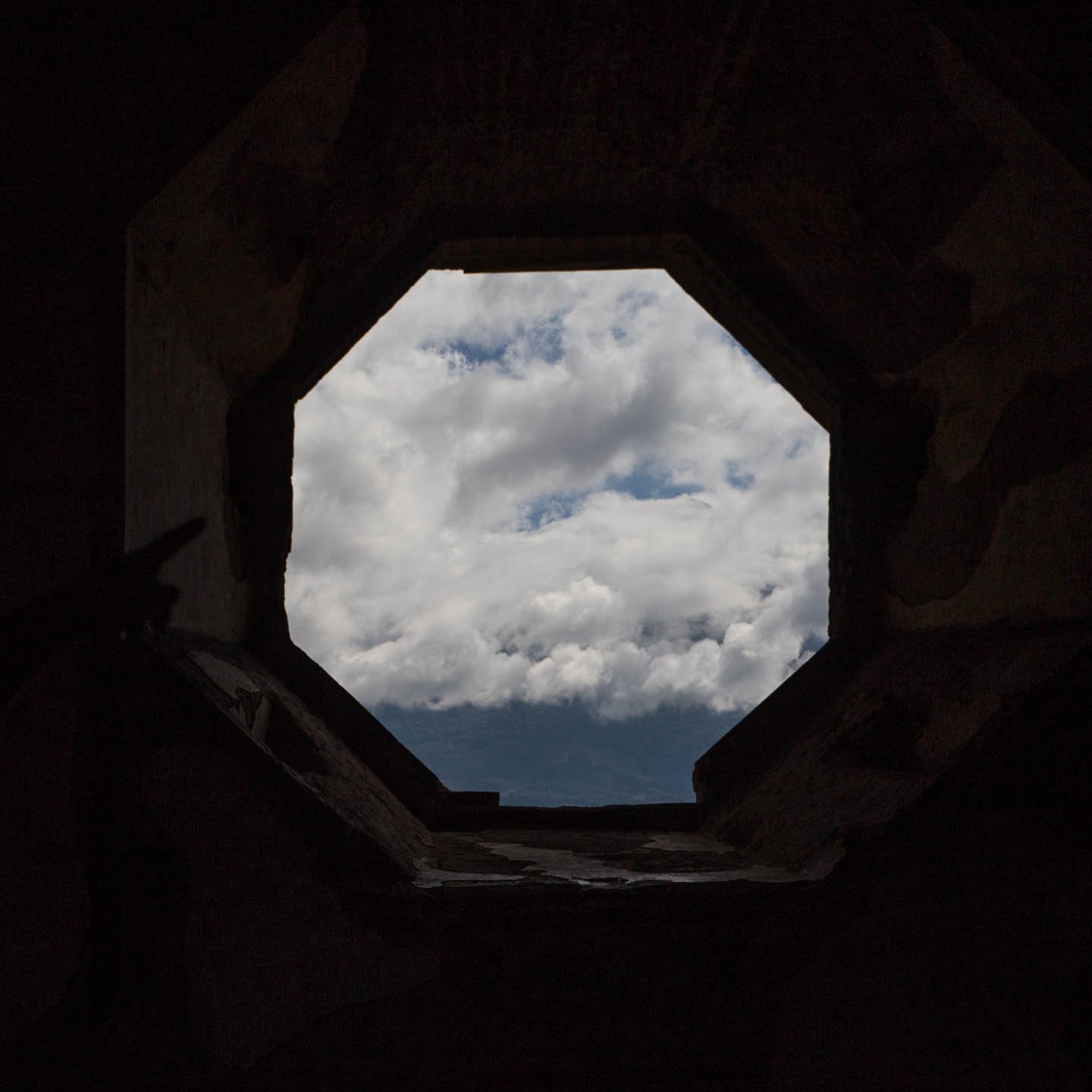 We had finally began to believe that perhaps the rumours of volcanic vistas were true. Was there more to see in the skies above Antigua than we had been seeing?

We moved backwards and forwards between Antigua and neighbouring Guatemala City, we had post to collect at the DHL office in the city on more occasions than we would have liked. There was a very convenient holiday park to camp in half way between the two towns. As time on our Guatemalan ran short we made our visa-run detour to Belize.

Each time we would leave the area, we would find ourselves drawn back. Often with high hopes of glimpsing these elusive volcanoes and of the clearer weather that kept being hinted at. Sometimes just for more cheese and coffee.

Every visit we found ourselves staying somewhere different.

When we first arrived, we booked an Air BnB hosted by this lovely lady: 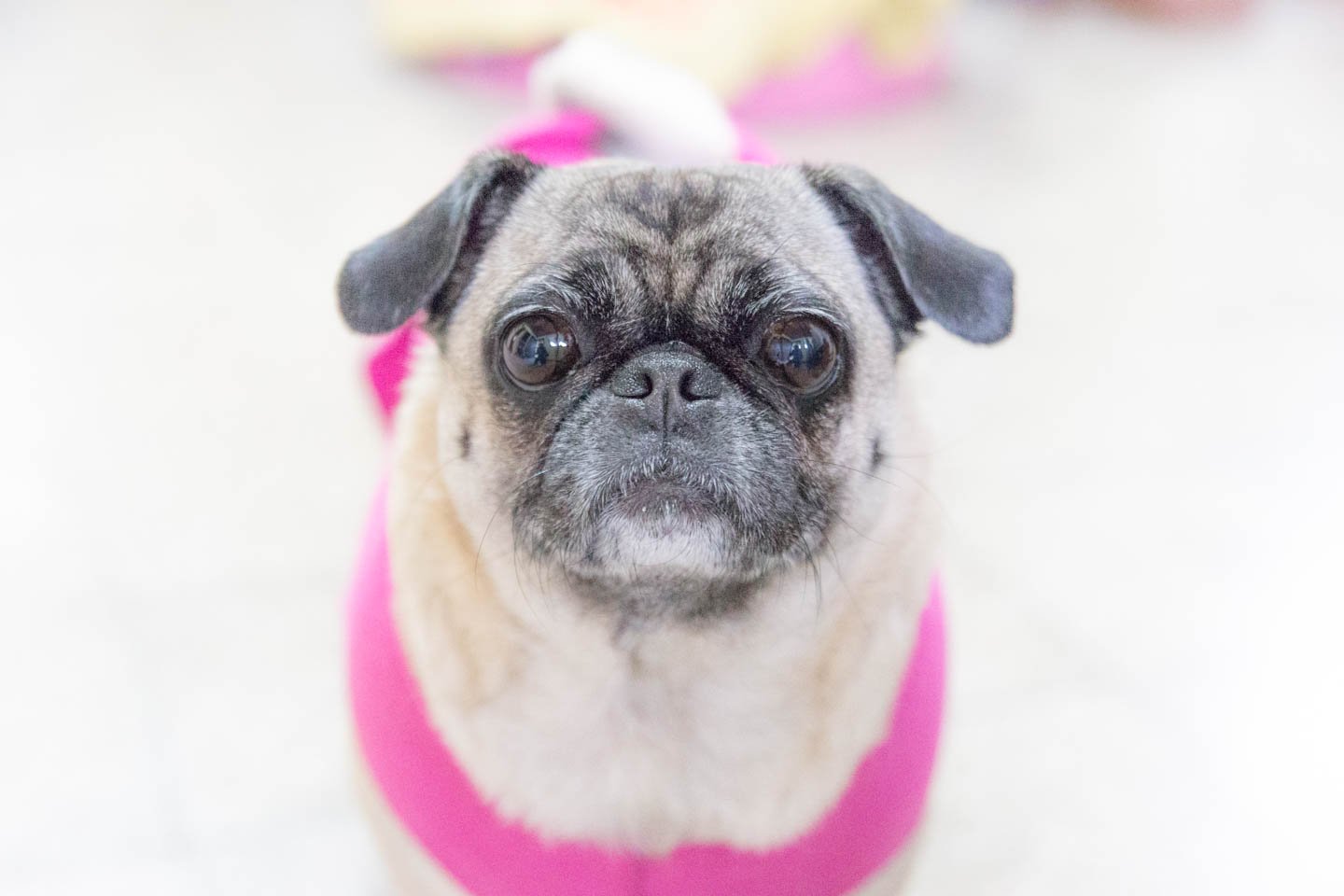 Her name is Mona Lisa.

She is a bit of a star and a princess. 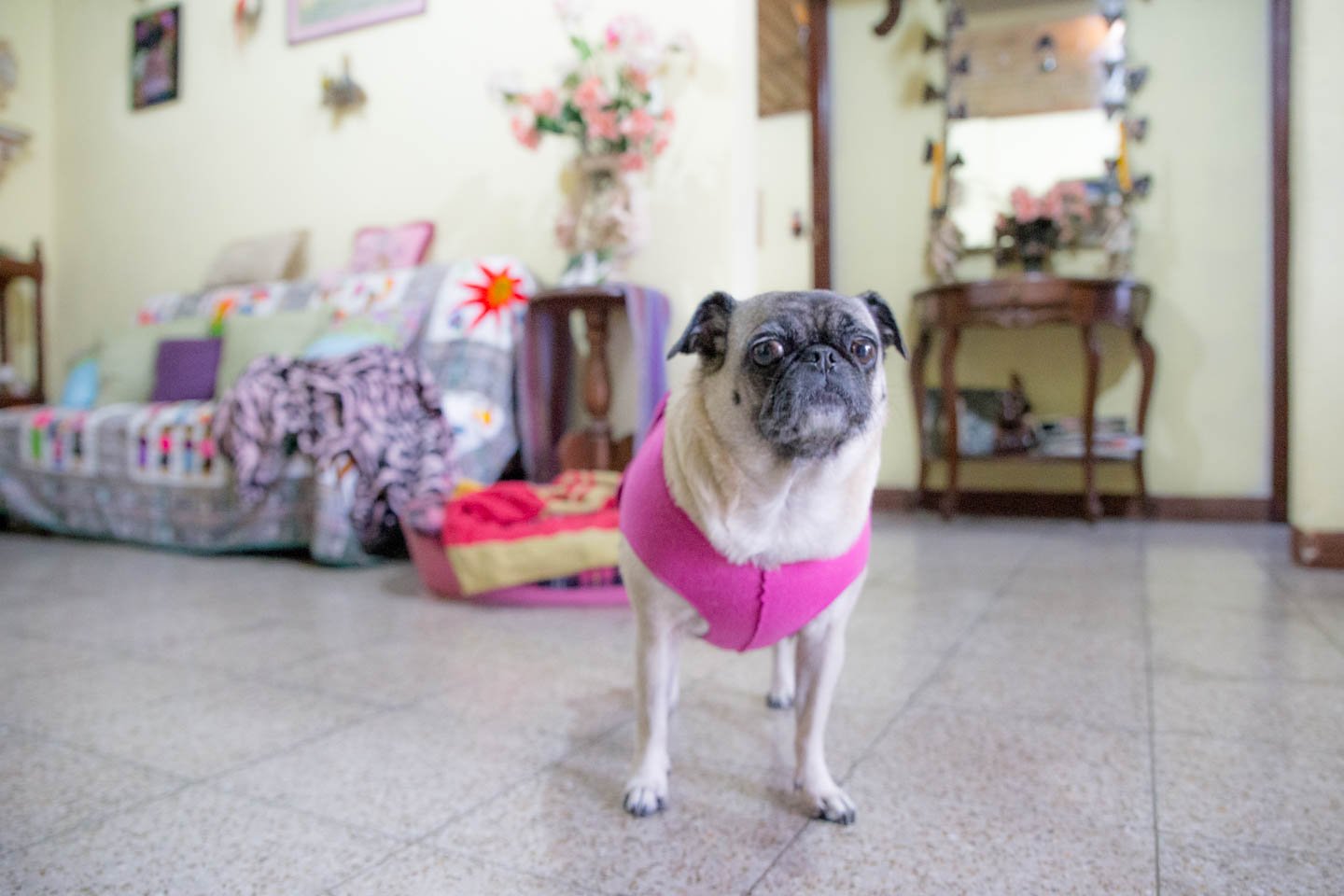 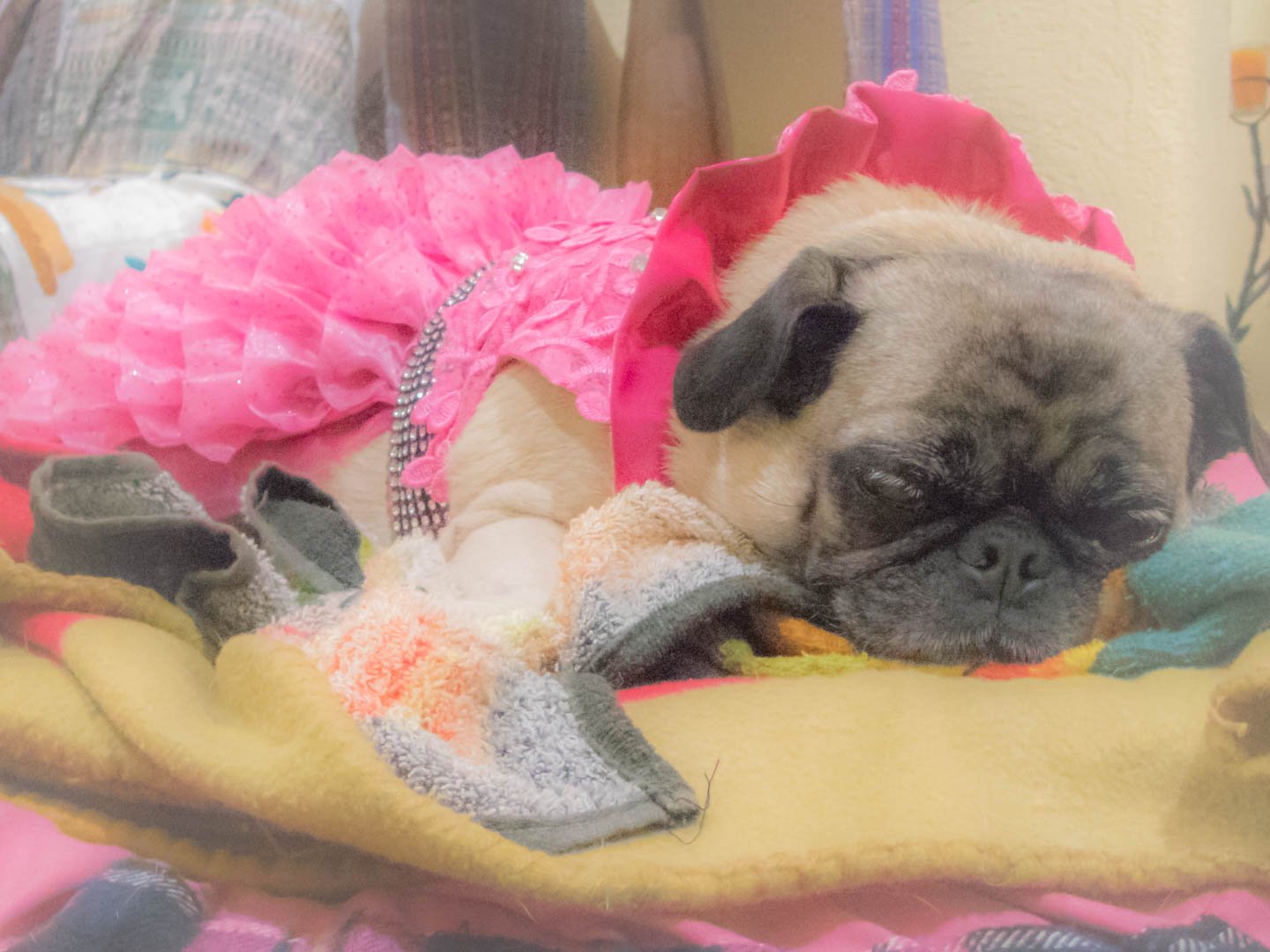 Technically, the AirBnB was run by a friendly lady who welcomed us warmly into her lovely colonial home. Giving us somewhere cozy and dry to escape the rainy afternoons. But it is pretty clear that Mona ran the show. 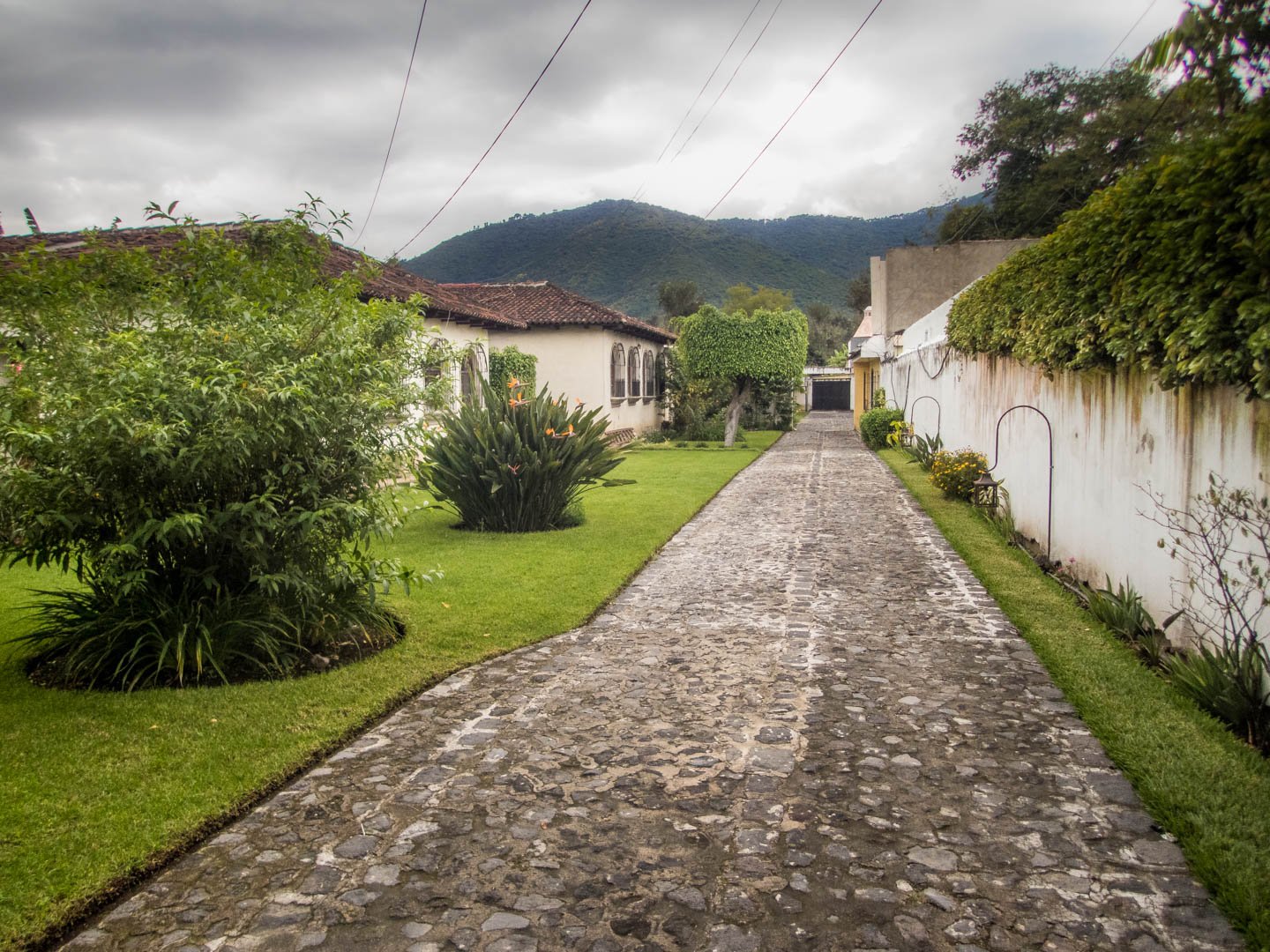 Other times we stayed in various hotels and hostels, or camped in a local park. All of these were amazing. Sometimes because of the wonderful, welcoming people who ran them. Sometimes, the vibrant atmosphere, the colonial charm or simply because ‘hot showers’.

But none of these were run by such a memorable host as snuffly, gruffly Mona. 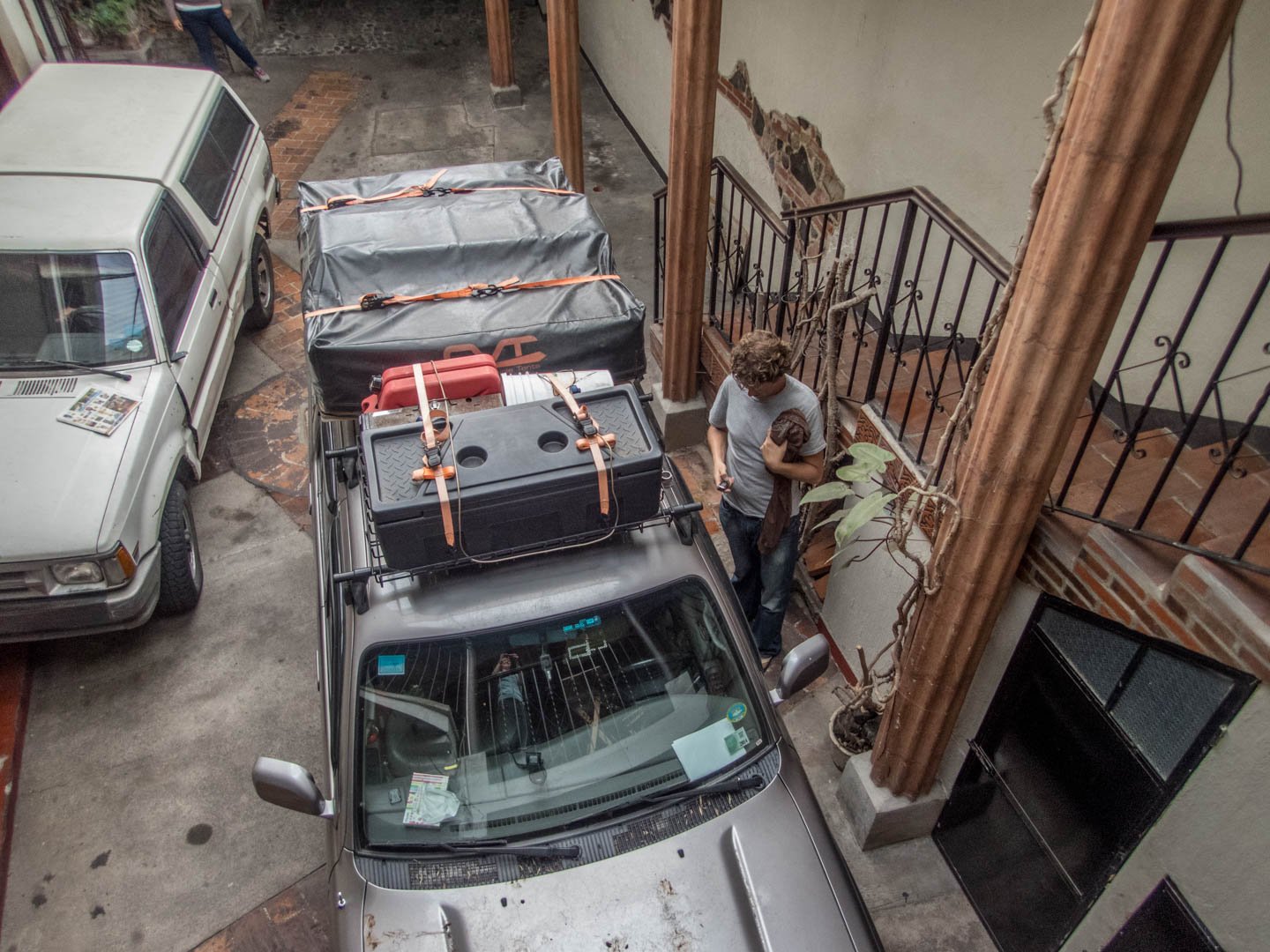 Indoor car parking is another thing we like about hotels in colonial towns. Convenient.

We had finally reached the conclusion that we were never going to actually see these oft mentioned, never visible volcanoes. On one of the clearer days we made our way up to the viewpoint at Cerro de la Cruz for a vista across the town towards Volcán de Agua. 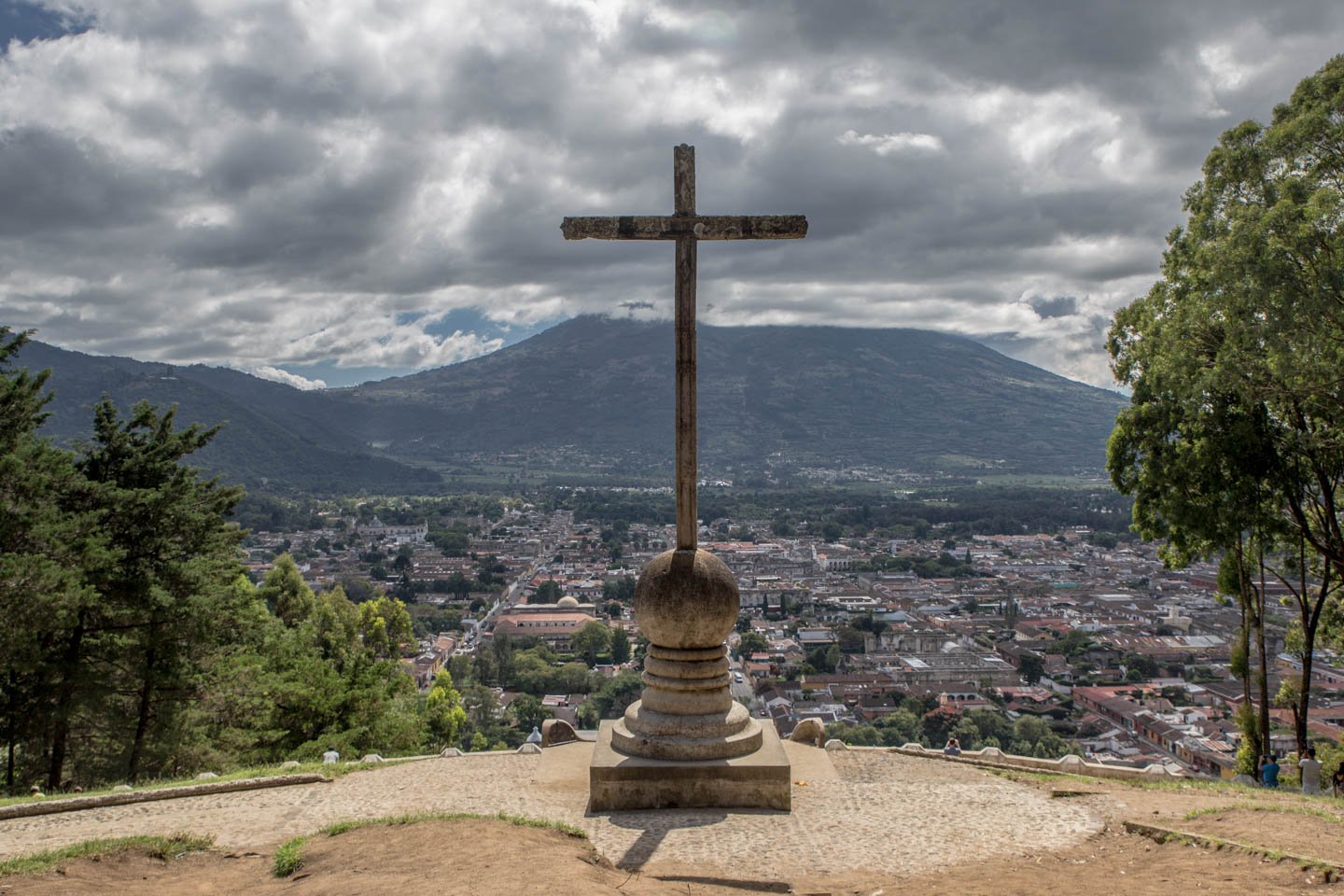 That counts. It counts. I can see most of the volcano!

We decided it was finally time to climb a volcano. But that is a story for another day. Suffice it to say that cloud, rain and wintery weather was involved. We had all but given up hope of ever seeing these mythical mountains. We were making plans to continue to El Salvador.

Then one morning this happened… 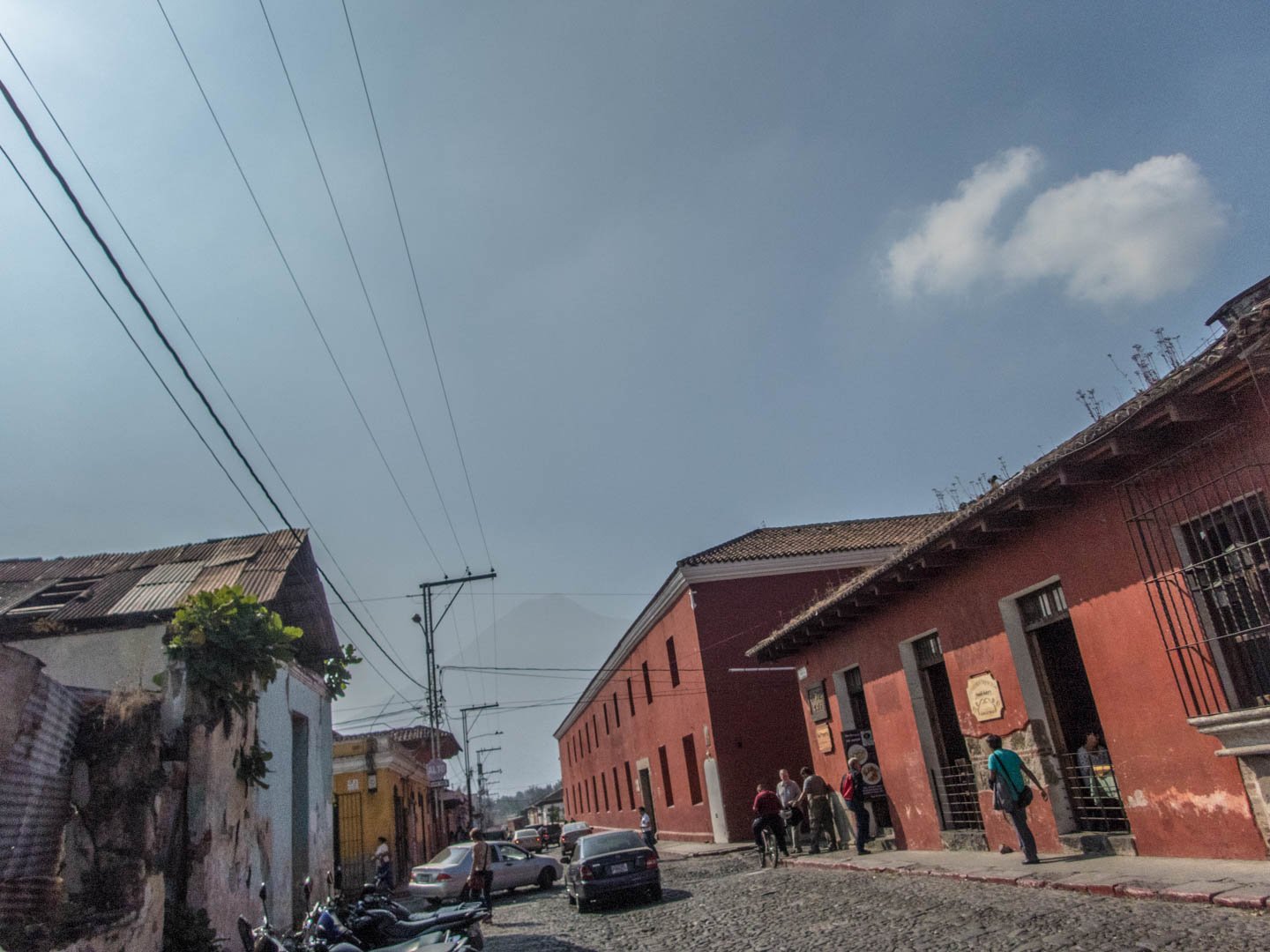 Everyone who visits Antigua seems to have a photo of Volcán de Agua peeking through Santa Catalina Arch. So it seemed wrong to miss the opportunity. 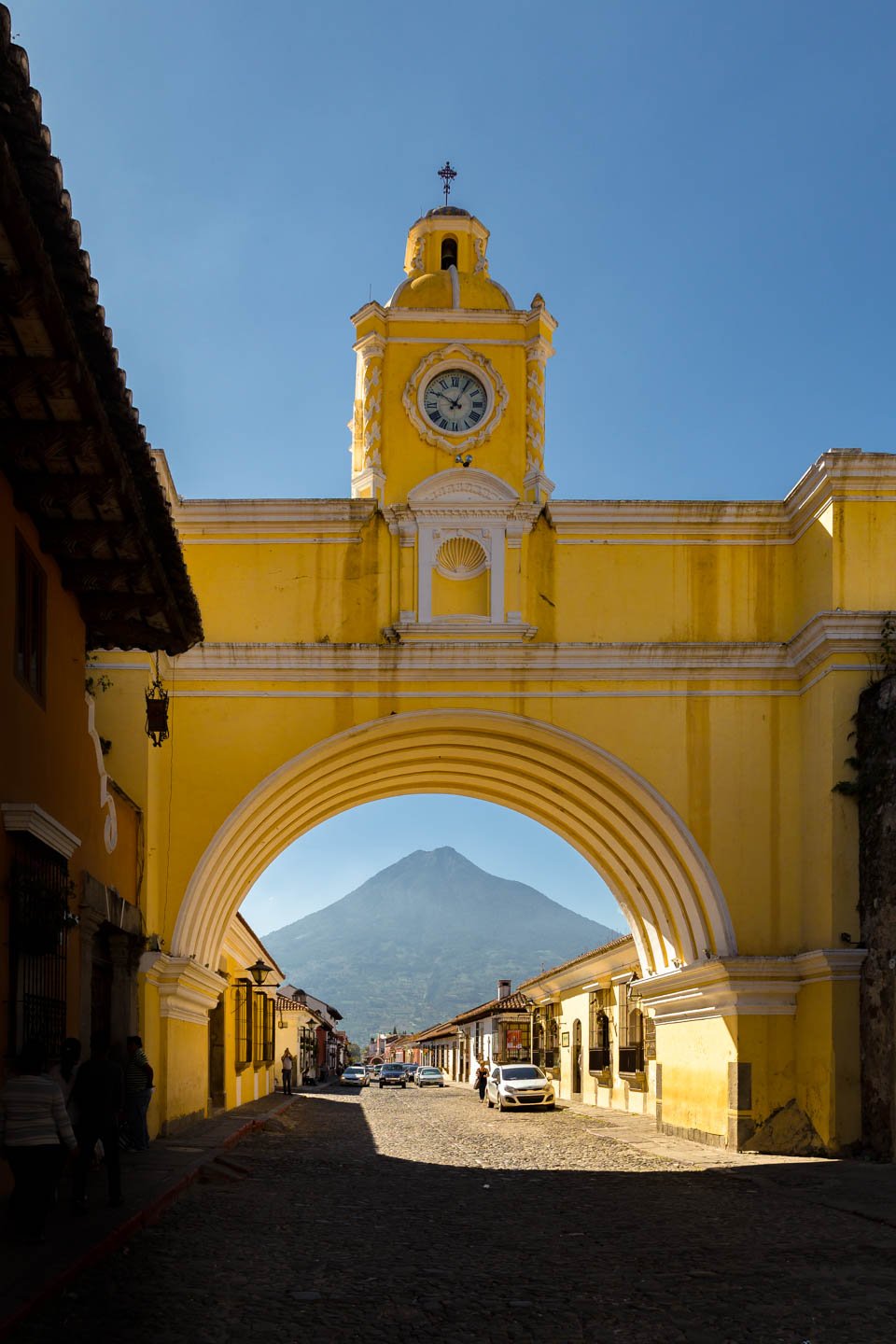 We also seized our chance to revisit Cerro de la Cruz to take in the spectacular vista from above the town.

But was it worth the wait? Absolutely! We’d wait another two months in Antigua. Sipping coffee and nibbling on delicious cheese. We’d do that even if the skies never cleared.