It’s in the pipeline 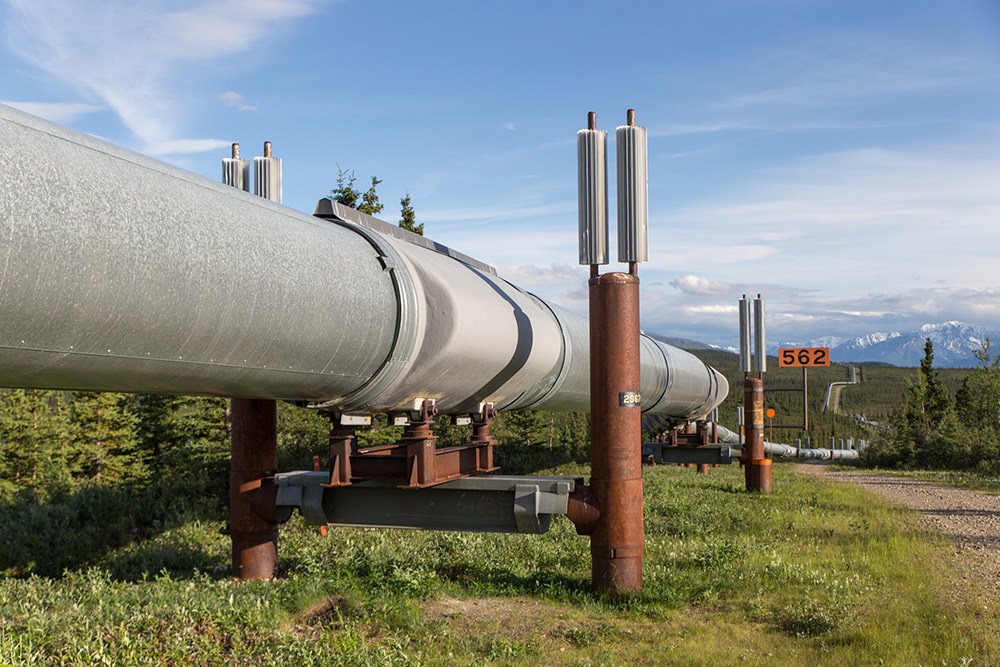 Since we were taking so long to get to the official ‘start’ of our journey in Deadhorse, Alaska, it made sense to delay a bit longer. The starting point of our trip South is also the starting point for the Trans-Alaska oil pipeline.

This pipeline finishes in Valdez, in Prince William Sound. So we thought it sounded like a plan to start where the oil finishes and then drive to the source.

We had decided to procrastinate further by driving all the way South to Valdez before we drove to Deadhorse.

Not in a big rush to leave Valdez, we hung around a bit visiting museums and learning about the history of the area. 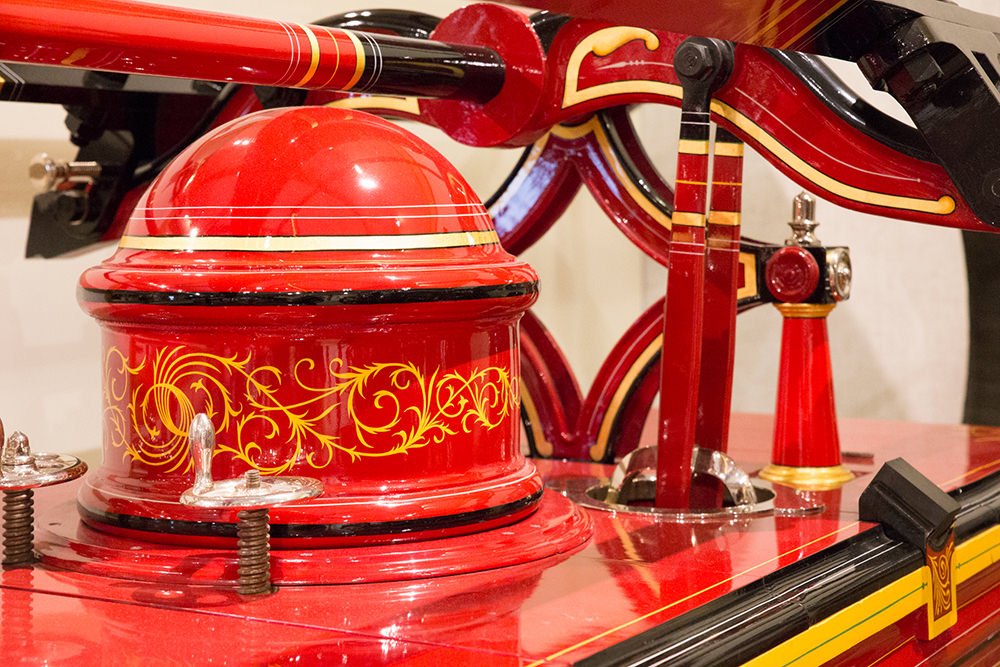 The current town of Valdez is situated a few miles from the old town site that was abandoned after the 1964 Good Friday Earthquake. The main town of Valdez itself was not destroyed by a tsunami. However, the main dock area, along with a decent chunk of land disappeared into Prince William Sound. The history books seem to conflict on whether this was as the result of, or the cause of a tsunami. But either way, the remaining land the town had been built on sunk a few feet and was sufficiently destabilised that the call was made to relocate the town to sturdier ground.

It is still possible to visit the old town site, the buildings have been demolished, but the streets remain. A few enthusiastic people appear to have built new houses in the area. We visited the old site of the town dock to get a glimpse across the harbour at the end of the oil pipeline. The oil company isn’t keen to allow visitors to get to the end of the pipeline anymore, so we figured that would do. 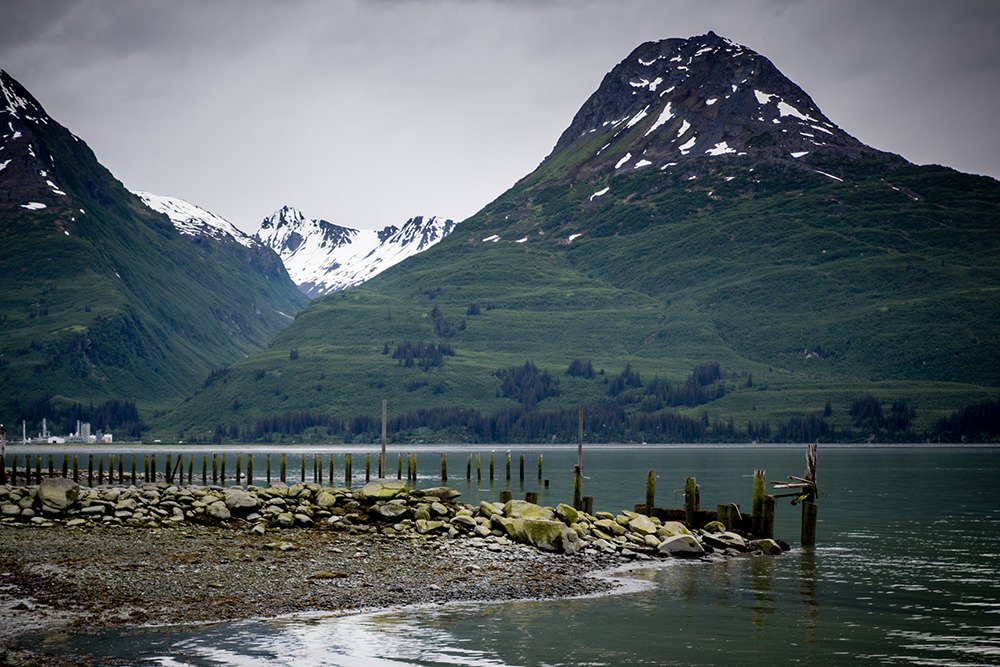 What is left of the docks 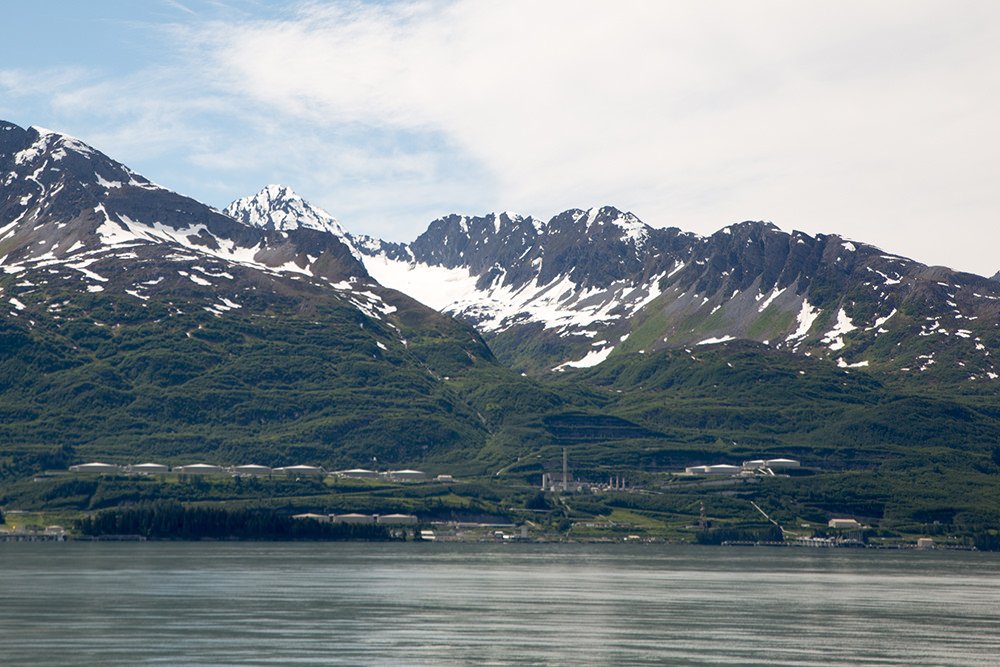 The pipeline terminus across the harbour

The oil takes one week to make its way from Prudhoe bay to Valdez, which is coincidentally about how long it took us to drive in the opposite direction.

Admittedly, we were distracted by a side trip to Kennecott but aside from that we were making good progress.

Such good progress that after leaving McCarthy we didn’t stop for fuel in Chitina, thinking we’d stop en-route to Delta Junction. We were travelling in the late evening, just planning on driving as far as we could until we didn’t feel like driving any more. This sort of thing works really well in the Alaskan Summer, all the extra daylight hours mean you can drive at any time of day.

What you can’t do at any time of day is buy petrol.

Around midnight we arrived at the perfect roadside camping spot and set ourselves up for the night, assuming that we would find an open gas station in the morning. 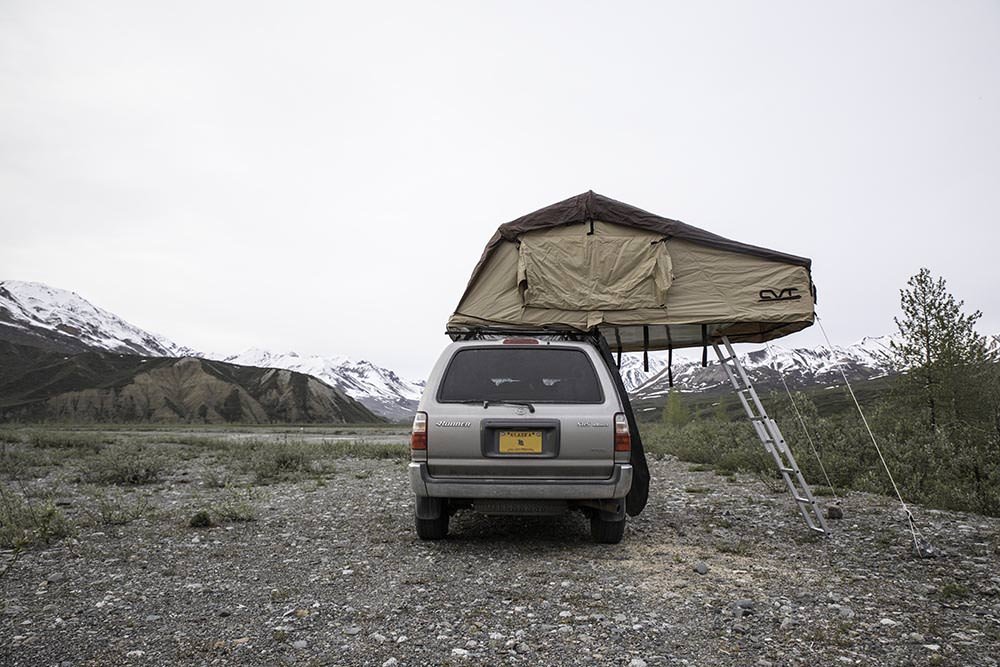 It seemed like a pretty awesome free camping spot when we arrived. 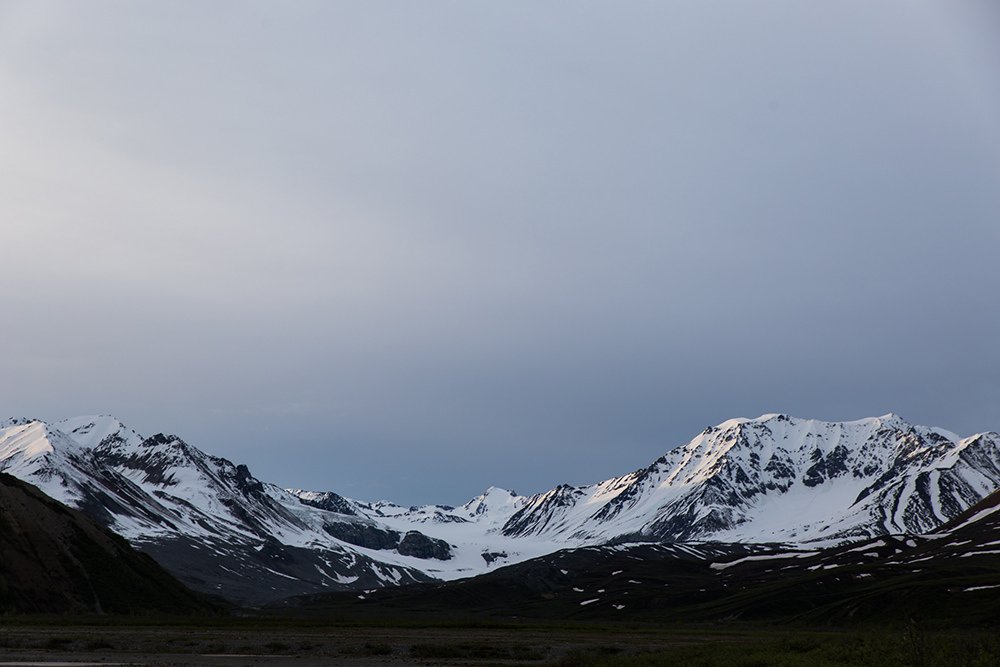 But it was even better as the sun dipped lower on the horizon… the view was spectacular.

No luck, about 30 miles from Delta Junction with the fuel light having been on for most of the morning we had to admit we were out of gas. There was nothing around. It was raining. A lot.

Conveniently, once we had realised that fuel stations were not to be found, we had calculated where we would run out of gas, so managed to stop in a wayside that was situated in one of the narrow patches of cellphone reception. Even more conveniently we remembered something about the insurance lady selling us on adding ‘roadside rescue’ for a couple of dollars extra a month.

Turns out the extra couple of dollars had been worth it. We sat in the car in the pouring rain, catching up on some blog writing while we waited for our fuel delivery. Convenient.

After thoroughly filling the tank with all the fuel we could squeeze in at Delta Junction, it was straight on to Fairbanks.

Well, that is, after a brief stop at the festive nightmare that is North Pole. 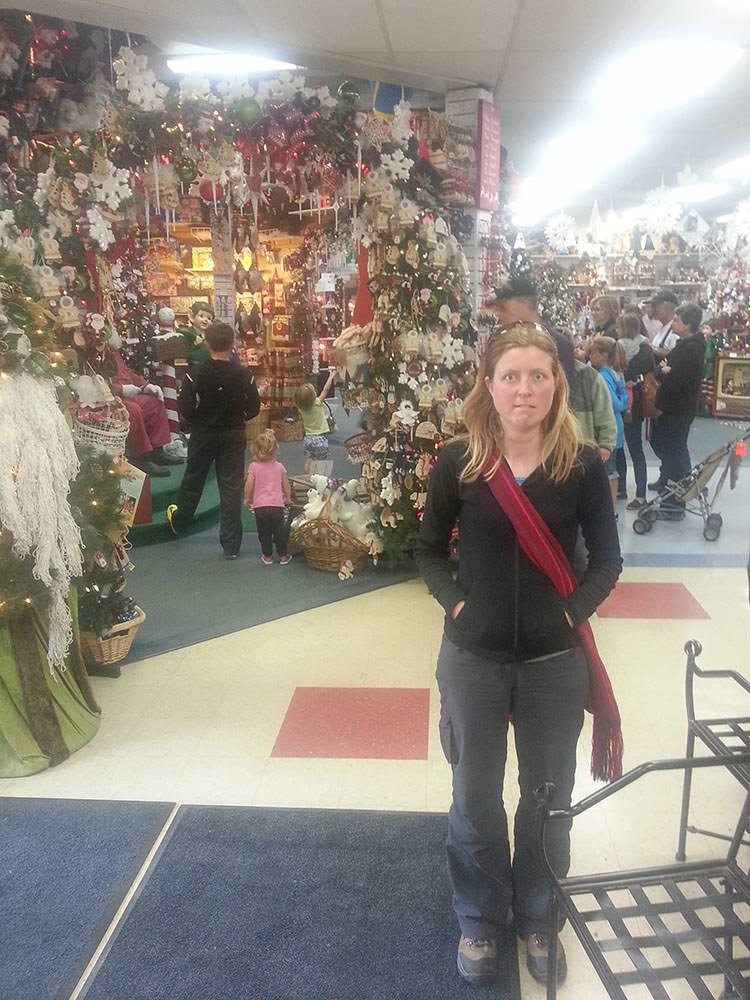 Emma getting swept up in the festive joy

Not being very festive people, we probably didn’t really appreciate it as much as we could have, although we did return later on to send a few postcards home with the North Pole postmark. It was pretty cute that everyone in town was in on the Christmas theme with candy cane lamp-posts and street names like ‘Santa Claus Lane’ and ‘St Nicholas Drive’.

Recently we were asked what we did in Fairbanks and realised that the answer was ‘not much’. Although we visited the town twice (once on the way up, once on the way back South) we didn’t really take in any of the tourist attractions. We skipped the hot springs. Forgot to go look at the bison. Missed the museum. And accidentally overlooked the sunken plane.

We’ll probably have to go back one day, sorry Fairbanks!

One thing we did do is book a night of luxury to belatedly celebrate Ben’s birthday. What do people who live in their car do when they want to be fancy?

Book a night in a train of course. 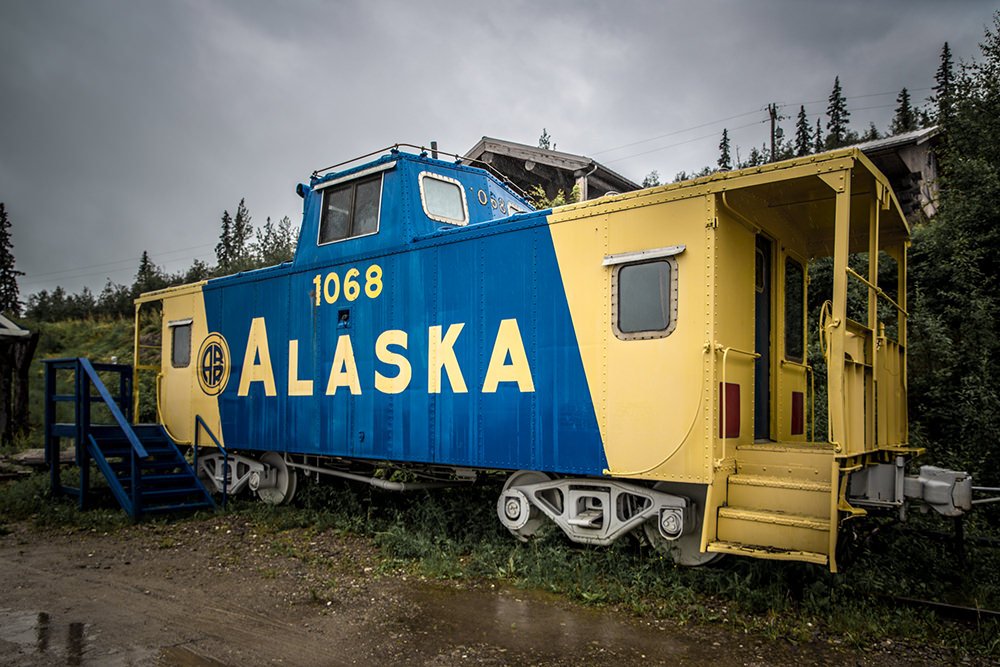 Luckily for us, the relentlessly bad weather that had been plaguing the area meant the Aurora Express had a free booking and could put us up in the caboose. 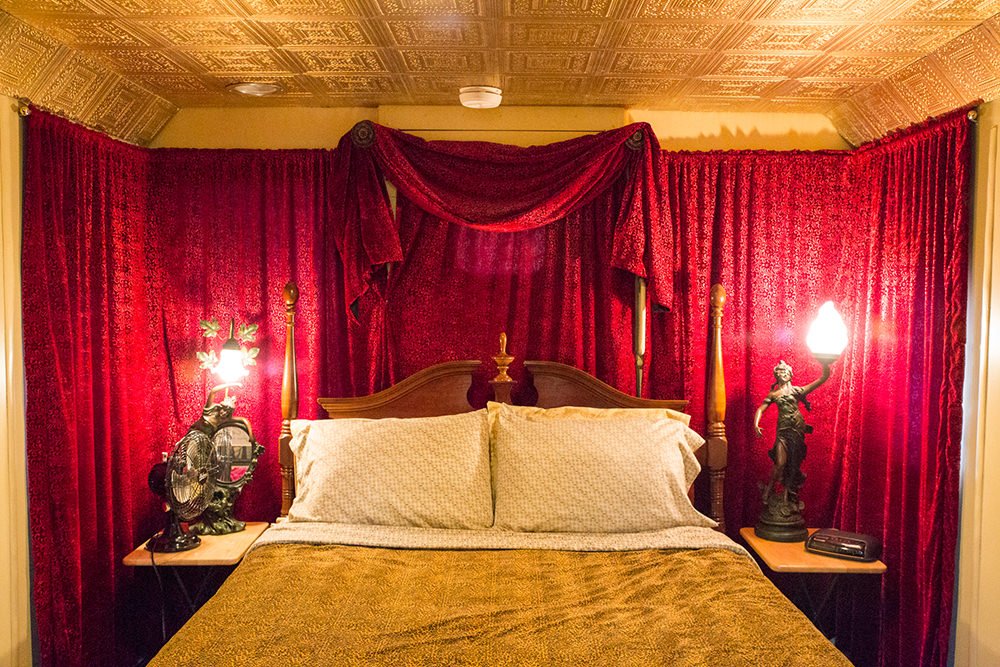 So yeah, it was set up a little posher than we set up the inside the truck and roof top tent 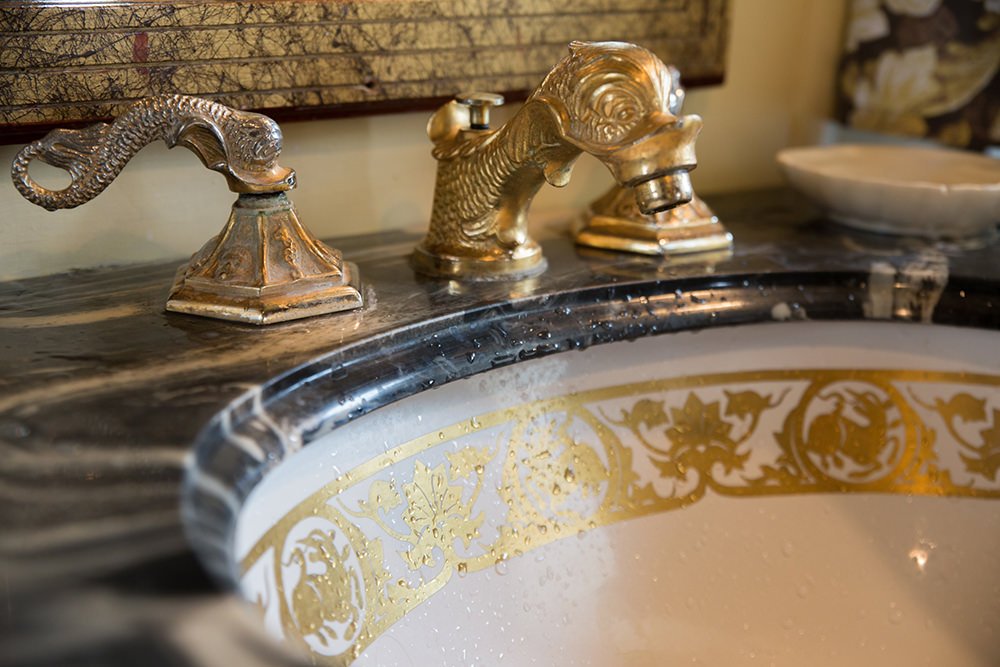 Could we get some of these tap fittings for the plastic water bottle?

Although it was Ben’s birthday treat, Emma’s excitement was apparent as evidenced by excited hand clapping and squeals of delight that accompanied the discovery of our own shower, toilet and the cute little individually wrapped toiletries that always cause delighted hand clapping. All inside the renovated caboose of a former Alaska railroad train!

But best of all were the two conductor’s seats with a view from the top of the Caboose. A great place for an evening craft beer as the rain we weren’t camping in beat down relentlessly on the roof above. 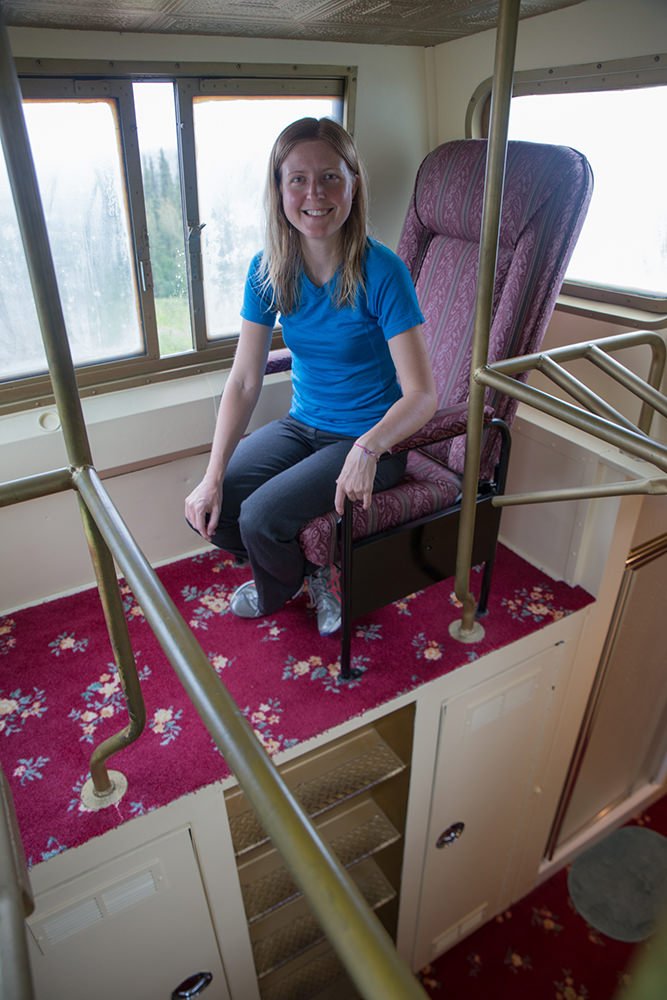 However, the trip would be over pretty quickly if we splashed out like that every day. So the next day it was back to reality.

Fortunately for us, reality these days means exploring some of the best countryside imaginable with our comfortable house ready for deployment, firmly attached to the roof of the truck. So we weren’t too disappointed to get back in the groove. Especially when the rain cleared the next day.

Aurora Express If you want to spend a night sleeping in a train, but prefer luxury to travelling like a hobo, this is probably the best option. The owners even cook you a delicious breakfast in the morning (and are great for a good yarn over breakfast too!).