The most savage creature in Alaska 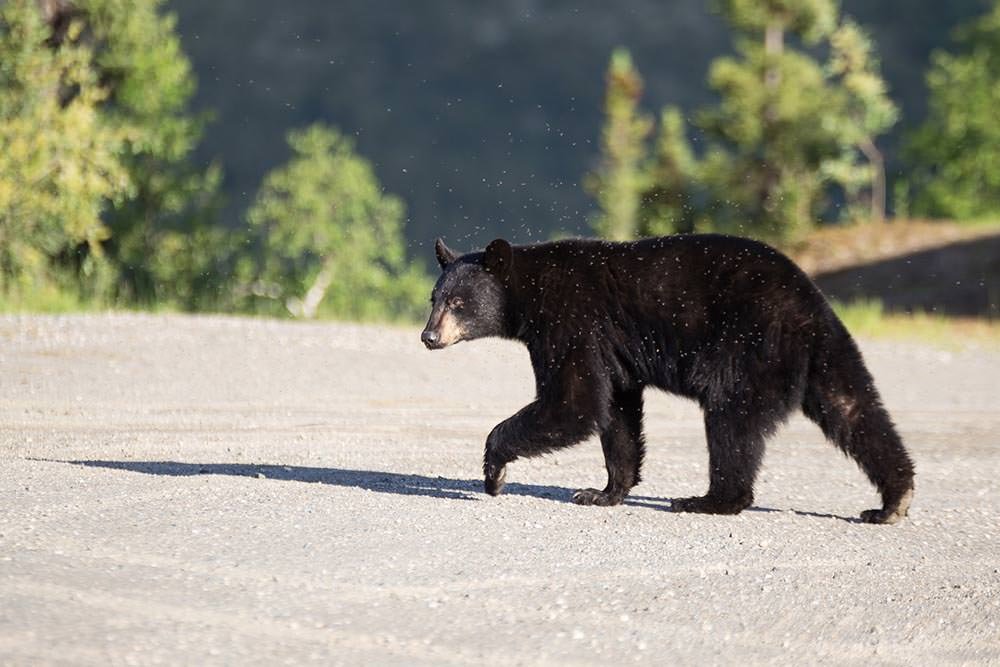 Look closer, there is a bear in this photo, but it isn’t him that we are afraid of.

We left Alaska having been attacked by exactly zero bears.

However, we were relentlessly and savagely attacked by more mosquitoes than we can count.

Here in Alaska, they don’t just have one kind of mosquito, they have 35 kinds. Yep. That is at least 34 more than they needed.

They vary in size from the almost invisible to approximately the size of sparrows. 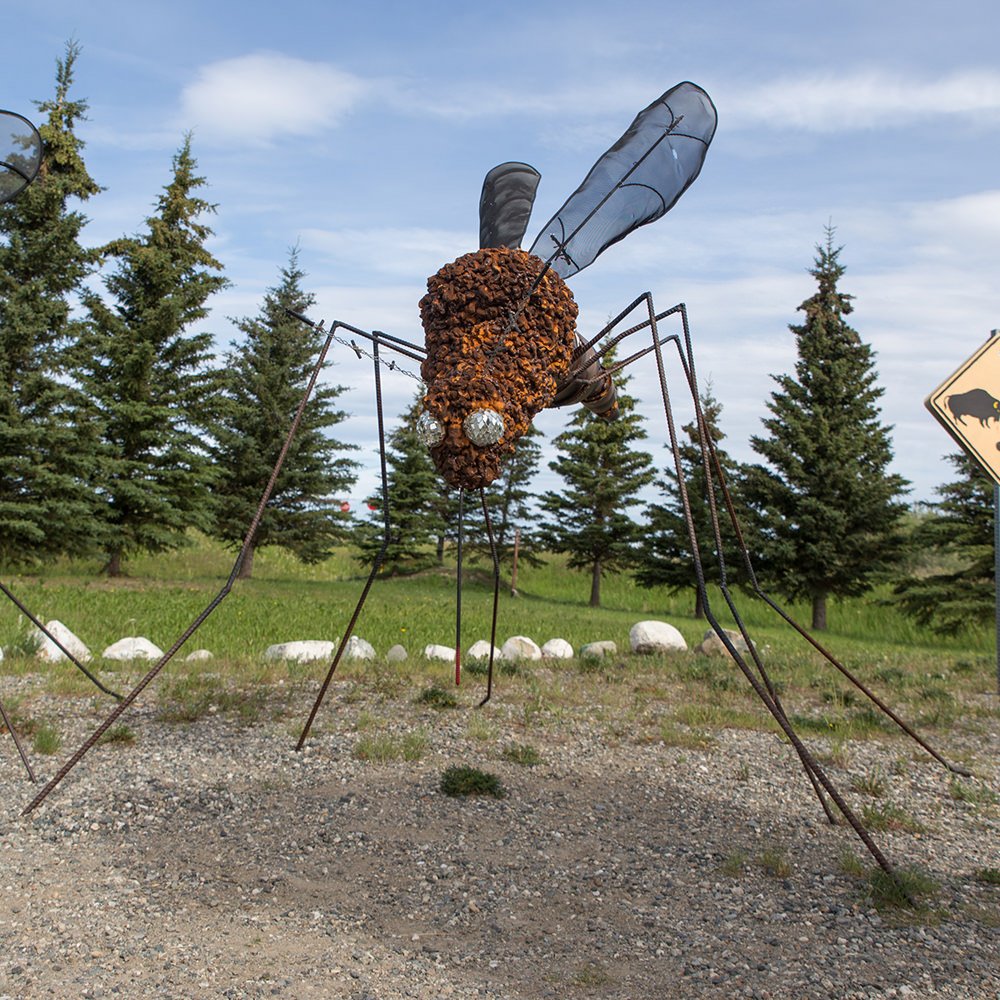 The main difference between the mosquitoes here and the ones at home is how ravenous they are.

The biting creatures at home are rather polite and indecisive, they sort of faff about while they make the call whether or not to bite you. They hover around, looking interested for a minute before they make an approach. Even then, a lot of them have some sort of gentleman’s agreement, whereby they won’t go for your face.

Here, they fly in at speed—on a kamikaze run. Any inch of exposed flesh is fair game, forehead, ears, fingers, the palm of your hand.

They are even fine with biting through several layers of clothing. Or your hair, whatever really. It is all food to them.

But there can’t be that many right?

Our roof-top tent also functions as a mosquito plough whilst driving. 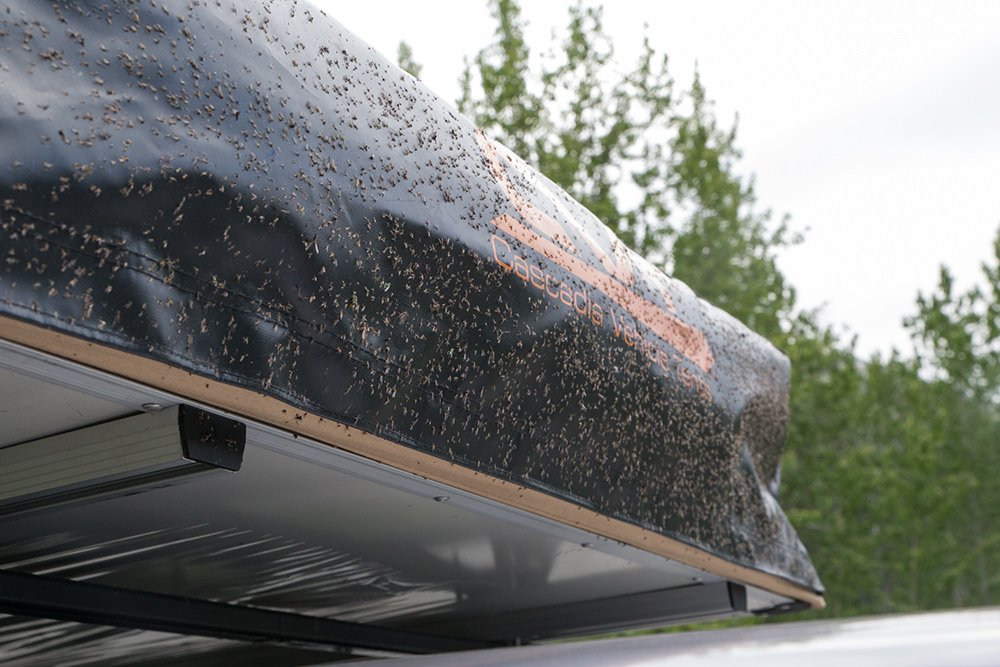 Trust me, it didn’t take a lot of driving to collect these.

We took this many out of circulation. Then when we stopped, within 30 seconds, this many of their surviving family members had already arrived to seek vengeance: 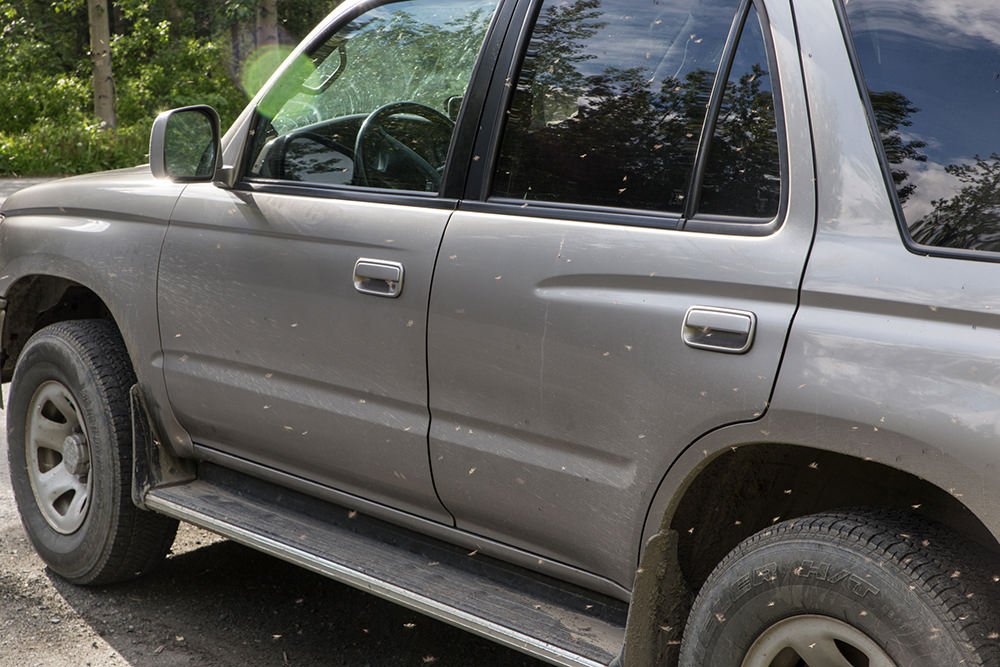 They are small, but they are angry.

Here some are queuing outside the tent waiting for their breakfast. 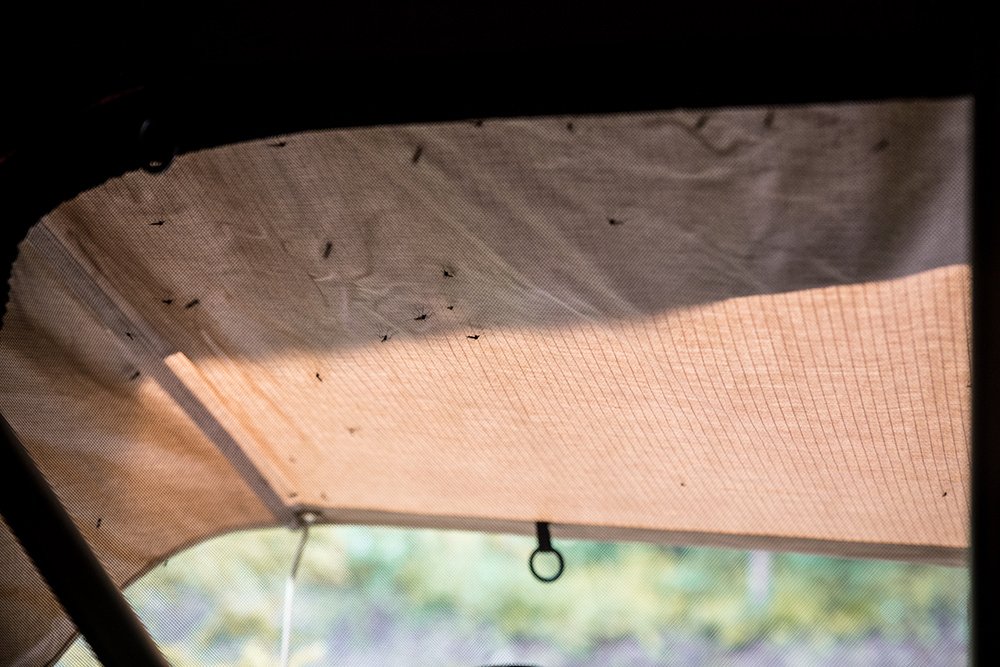 The road signs warn you to watch out for moose, but the mosquitoes leave pretty big marks when they hit the windshield.

Not sure whose blood that is…ew.

They dine on mosquitoes. 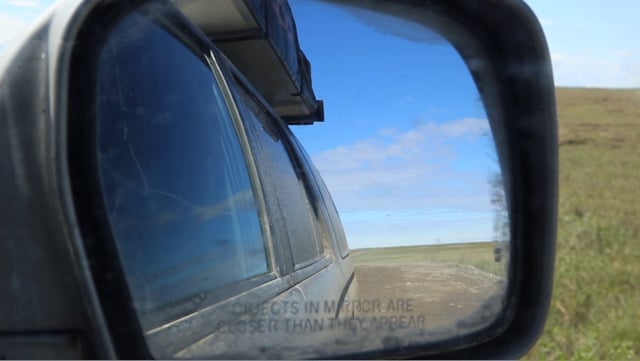 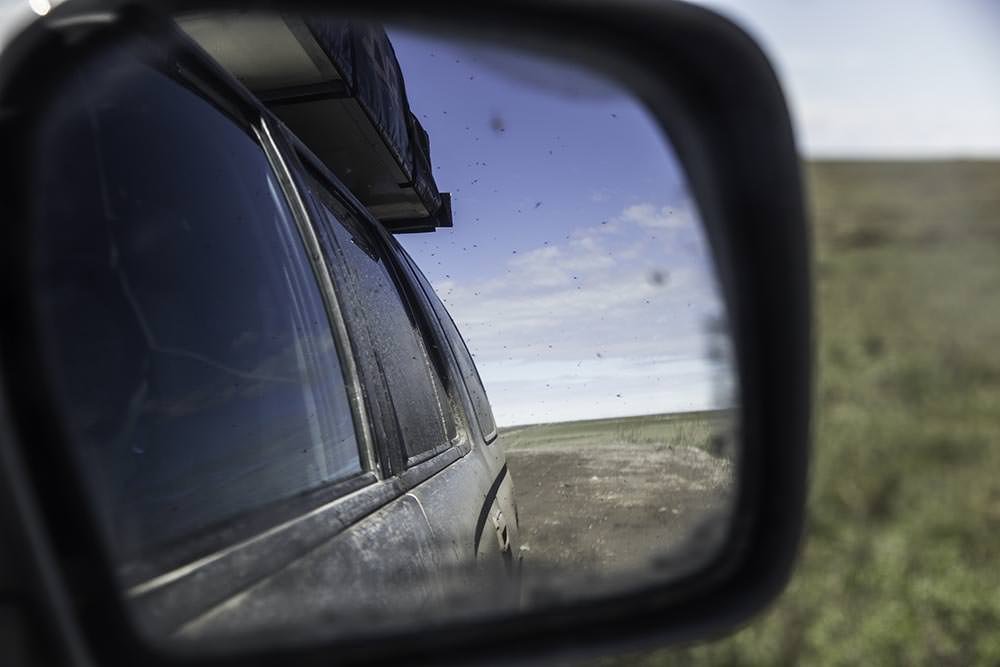 Apparently the relentless mosquitoes are enough to influence the migratory patterns of Caribou who move to colder, windier, snowier ground to escape them. 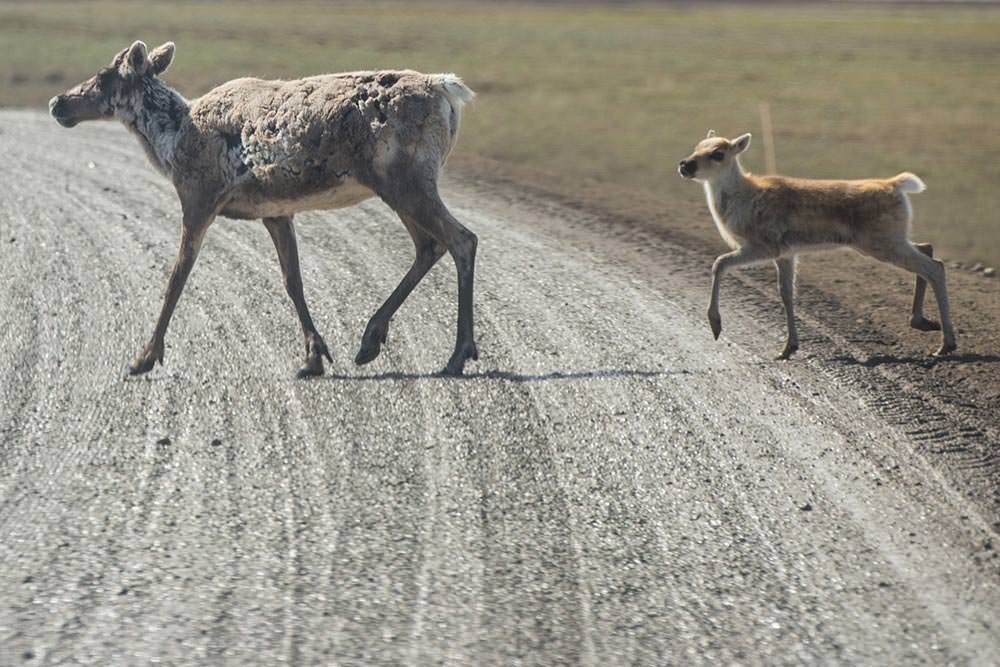 That’s it! We’re moving to Siberia.

Can’t say I blame them really. We do the same.

In Alaska it was common to hear us say, “hmm, not sure if this campsite is cold, windy and exposed enough, is there somewhere without trees nearby, perhaps on that ridge?”

The best thing about mosquitoes? Hilarious photos of us fighting off the unseen enemy. 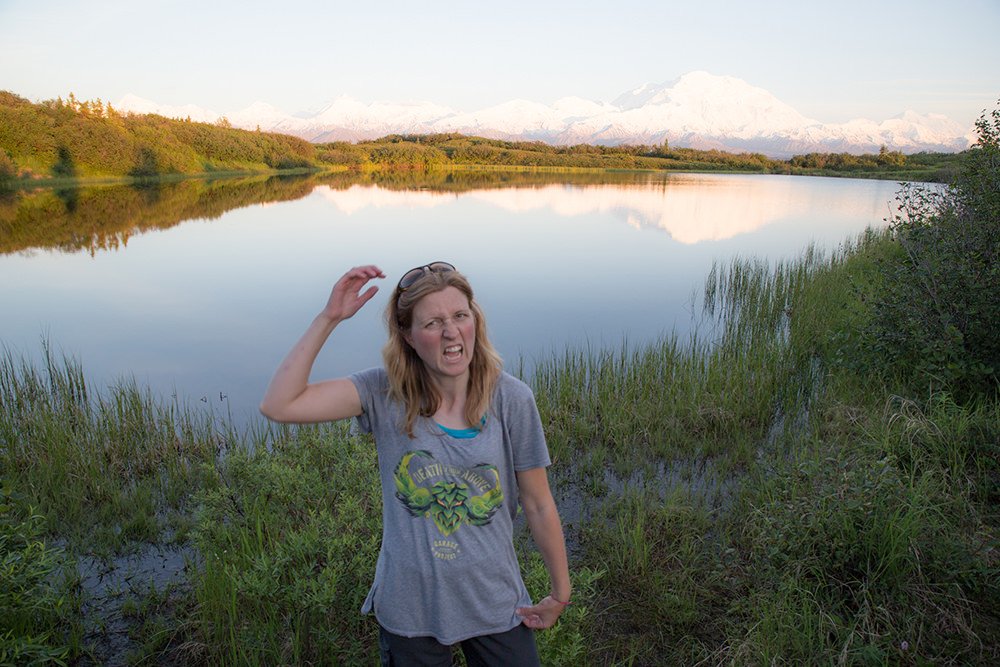 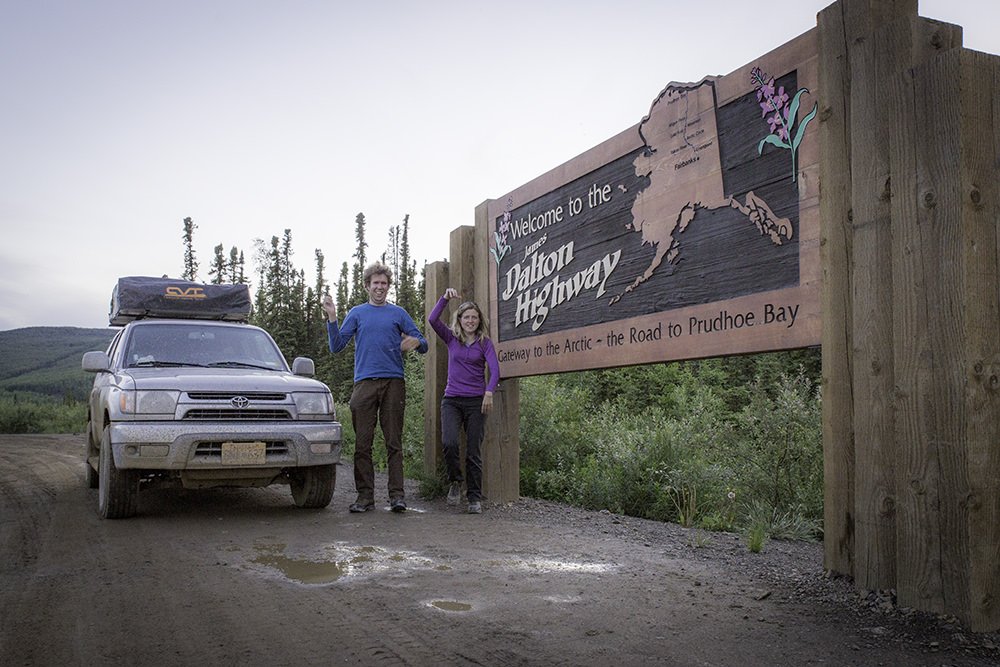 Now we’ll admit that we ended up travelling the Dalton Highway right in the middle of peak mosquito season. If we’d gone two week’s earlier or later it would have been outside the peak.

But the worst part was—everyone said the mosquitoes were pretty tame this year!

Next time we are visiting in winter.

AlaskabitingbugsmosquitoesmosquitosmozziesswarmUSA
« It’s in the pipeline
The Journey North »