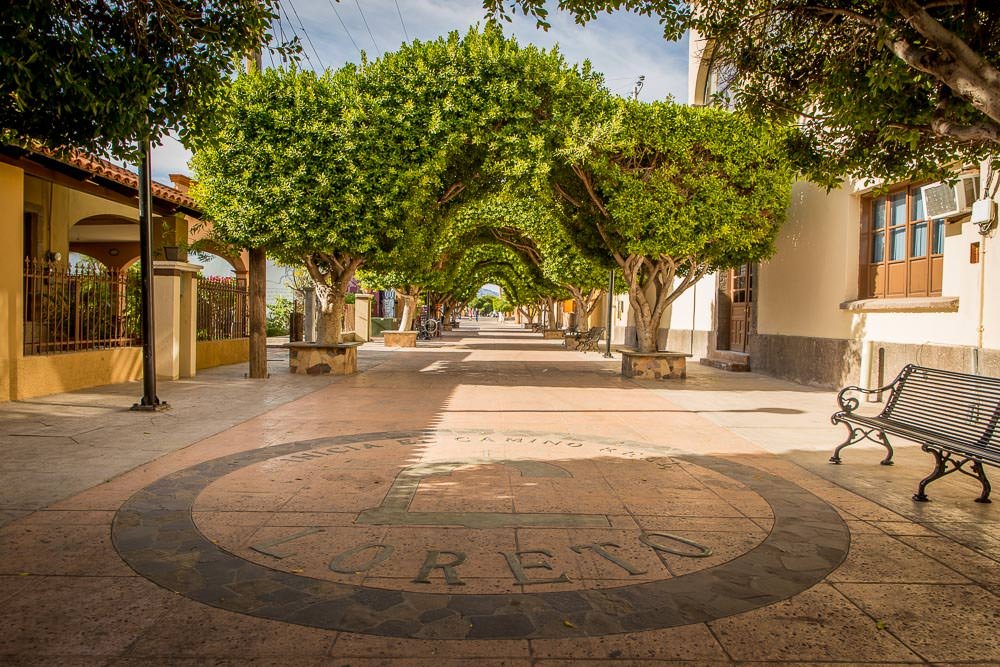 Everywhere we travel, we tend to feel at home. Whether it is in the chaotic midst of a big city, alone on a cold windy mountain top, wandering the narrow alleys of a bustling market or lost in dusty back roads, far from the nearest store.

One such place was the town of Loreto, in Baja California Sur.

We had spent most of the day waiting around on the sandy shores of Bahía Concepción, hoping that the wind might just calm down and the abrasive full-body sandblaster would again become a quiet beach. 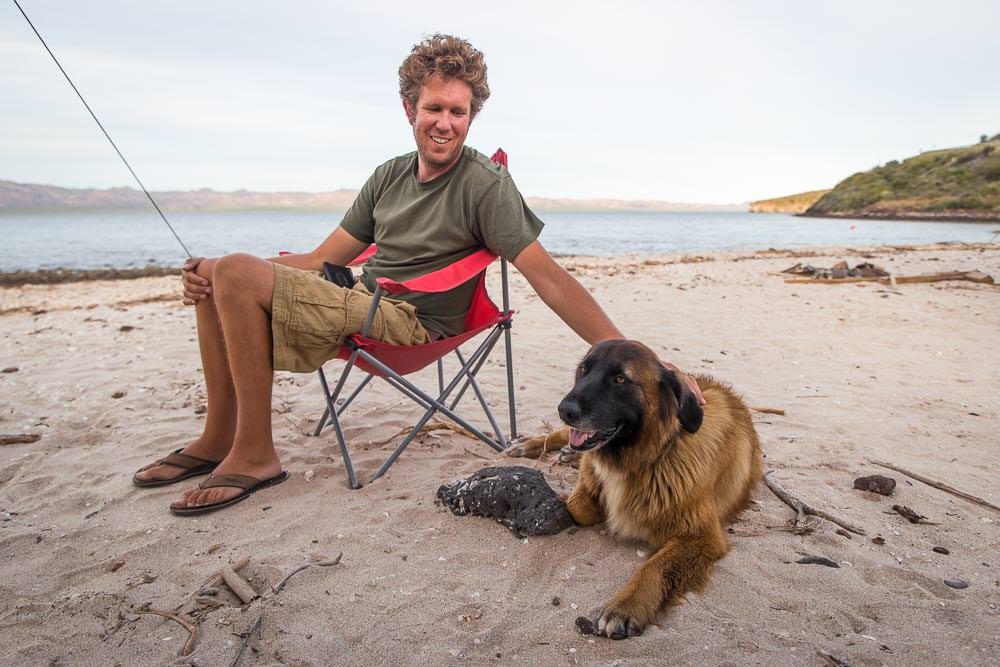 At least we had good company while we waited.

It was early evening when we rolled into the seemingly empty town of Loreto. We had in mind a place where we wanted to stay. The description sounded hopeful, but the location proved to be a bit tricky to find at first. We were quickly distracted by the large, clearly painted signs for another park.

Upon arrival, the owner of this other park looked upon our vehicle with distaste and said ‘no tents’ . We eventually sold him on the idea of letting us stay in a rooftop tent (apparently rooftop tents were cool enough to enjoy their exclusive camper van only club) We, on the other hand, were not sold on the price (about 3-5x more than we had paid most other places we had stayed in recent weeks).

Luckily it was as we were driving away from there that we spotted the small, faded signs for the park we had originally been looking for.

The park itself looked quite nice, was rumoured to have magical hard to source things:

It sounded to us like the only thing that was missing was an on-site brewery. We immediately decided to settle in for a week. 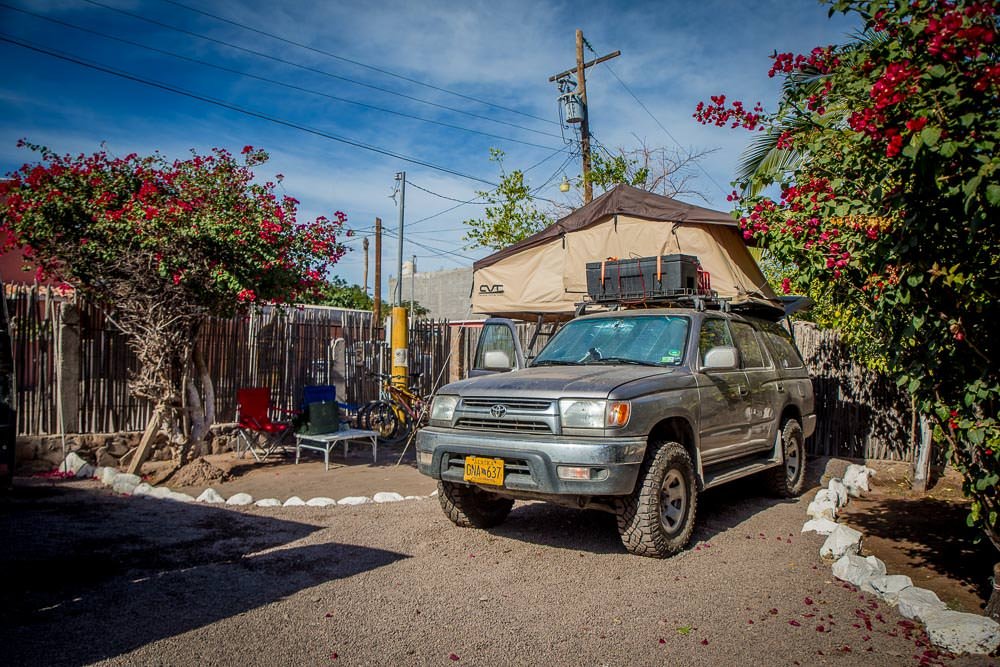 Our (almost) perfect camping spot for the week. What you can’t see is the nest full of aggressive red ants Emma tried to make friends with. Lesson for the week. Red ants are NOT friends.

When we arrived, we were soon greeted by a friendly chap who was staying there. He introduced himself as Andreas and told us he and his wife had been visiting Baja for the last 18 years. As a result he had no shortage of local knowledge. The best bit of information we got from him was that he and another chap, Bob were planning on riding their motorbikes up to a festival that was being held at the nearby Misión San Javier the next day and that it was well worth a visit to.

This sounded like a great plan, days of rest could wait, it was settled—we were going on a road trip the next day.

While we were chatting to Andreas another local park resident wandered past, Andreas introduced us to Fred, from Alaska. Most people who spot our Alaskan plates are then bitterly disappointed to find out that we are just from New Zealand. Some people have simply stalked off in silence without even a goodbye upon exposing our ruse (we can only assume out of sheer disinterest). Conveniently, Fred was still happy to have a chat with us phoney Alaskans.

The next day we packed the car back up and drove towards Misión San Javier wondering what we would find up there. It was a multi-day festival, but today was the day that the hundreds of people pilgrimaging to the mission were scheduled to arrive on horseback.

It wasn’t long before we were passing horse riders on the way up the winding road to the mission. 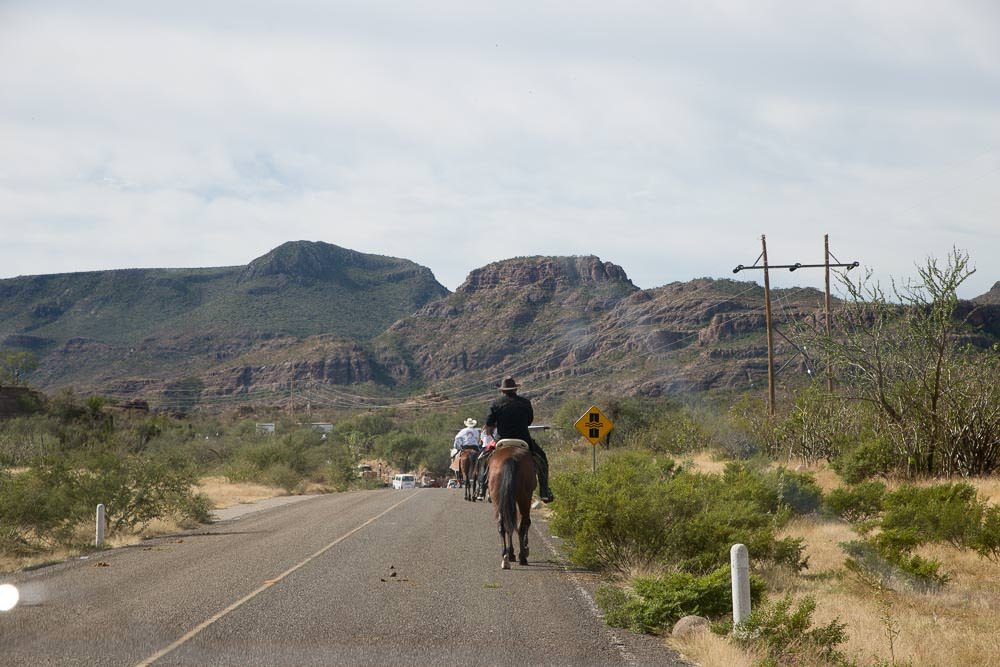 We found a spot to park the car, just down from a rather flash looking XP camper. We wondered if we’d meet the occupants, we assumed they were on some grand adventure or other.

About 15 seconds later we did—It was a Gunter and Sissi from alaskawilds.me who had just arrived from Scorpion Bay. They were en route to Loreto and had stopped to check out the festival.

Andreas and Bob soon showed up on their bikes. With Andreas’ magical powers of actually being able to speak coherent Spanish we found ourselves a good lunch and everyone settled in with a prime view to watch the first of the rancheros arrive on horseback.

There was plenty going on at the festival, although we didn’t hang around long enough for the rodeo or the cock fighting, it was still an enjoyable afternoon.

So much delicious food at the festival.

No shortage of live music.

There were plenty of Carnival attractions.

The 18th century church at the heart of the festival

Pilgrims arrive at the church from all over the Baja peninsula.

Before we had left Loreto, Fred had said ‘watch out for borrachos’ Who or what is a borracho? You might ask (we did). Turns out it is this guy: 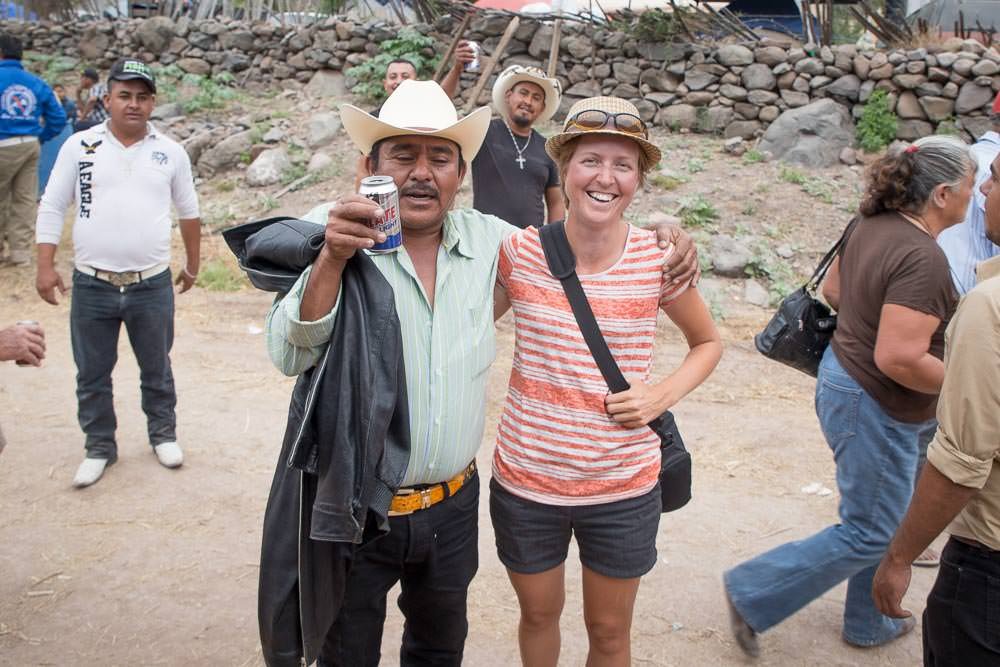 Don’t worry, we found one Fred!

The next day, as we settled in for a taco lunch in town, who should drive past but George and Jenine from Traveling the Americas.

Fred invited everyone over to sample some of his delicious Alaskan Halibut ceviche and we finally got to taste some equally delicious Alaskan smoked salmon. (Which we hadn’t in Alaska, because it was kind of expensive… much cheaper if you are hanging out with people like Fred and Gunter and Sissi who catch their own!)

Conveniently it was clam night at Augies, (the local watering hole), which means you buy the drinks, but they keep feeding you plate after plate of delicious clams. Even more conveniently there was a local craft beer bar: 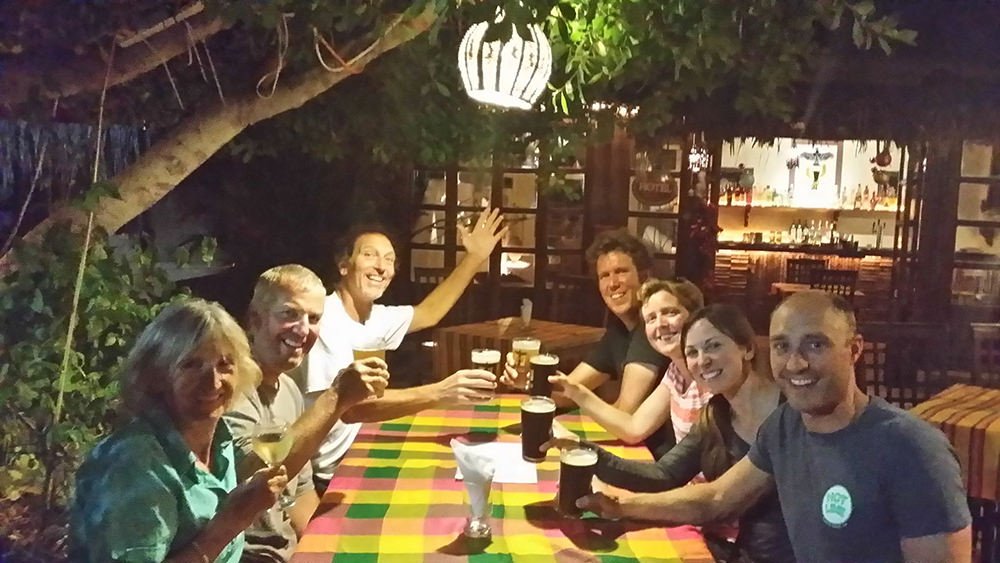 Left of the table three real Alaskans: Sissi, Gunter and Fred. On the right: Two fake Alaskan Kiwis and our friends Jenine and George, who haven’t been to Alaska yet, but really should.

It was at this point that we realised that Loreto was probably the best place we had been in Baja. Not because of the amazing scenery, but just because there was so much damn good food and beer, along with plenty of great people to share it with.

We enjoyed a quiet week of relaxing, eating, drinking, cycling, running, blogging, drawing, reading and chatting to all the great people we met at the trailer park.

Fred (henceforth known as ‘Uncle Fred’) took us under his wing and showed us the best spots for said eating, drinking, running, and cycling. He taught us to make decent ceviche, introduced us to good tequila, made us feel like big girl’s blouses for not catching our own fish and laughed at our stupid travel stories.

He also introduced us to his cool friends who were building a self-sustaining luxurious retreat just out of town. After seeing the amazing work they had down building their property up it reminded us of two things:

Despite this, for now the magic of changing the scenery in our back yard as we drive each day is enough to make the choice to live in a tent the right one for us…For now at any rate! 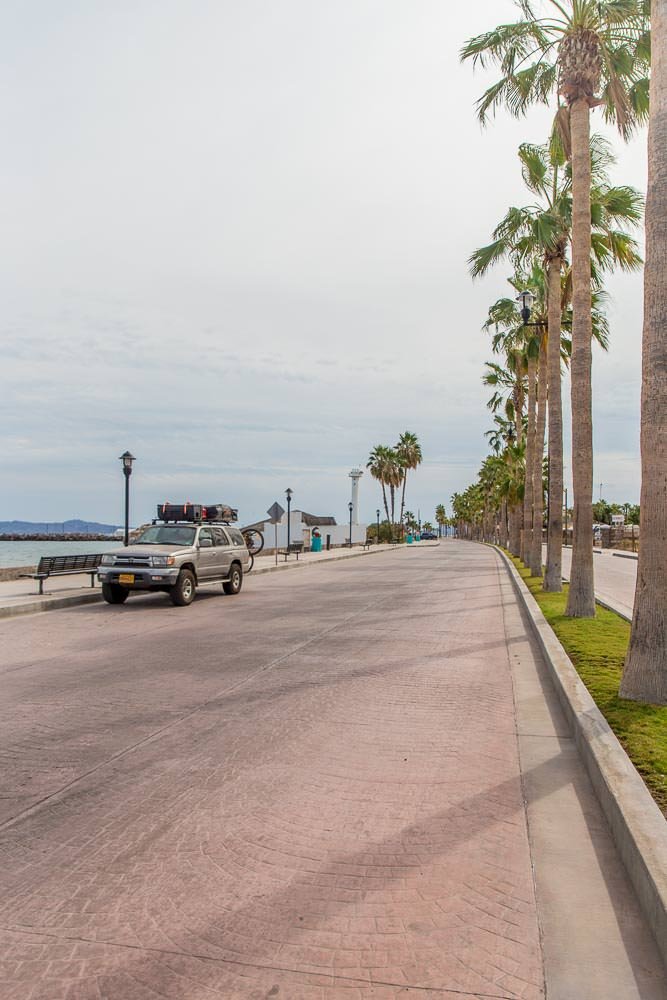 The Four Wheeled Ticket to Freedom parked on the Malecón in Loreto, Baja California Sur

It was in Loreto that we finally started to meet even more people who were either on similar journeys to us or had already been on them. Everyone was making the journey in their own way:

After seeing all their travelling set-ups, with indoor space, solar panels, kitchen sinks and that sort of thing, we were feeling a bit povo in our little rooftop tent.

But it wasn’t just people on four wheels that came by, Jess showed up on his cargo bike, peddling his way south to Argentina, despite travelling under his own steam he was still moving south a little bit faster than we were.

Another cyclist to make us feel lazy!

Just to really make sure we knew we were approaching our travels the lazy way, we again saw Chris and Dave from Canada, who were cycling to Nicaragua.

But just when we thought that we had met everyone we possibly could travelling the Pan American highway, Jamie arrived. Jamie is running. Really, that is the actual name of his website too. He is running from Vancouver to Argentina. His vehicle of choice? His feet—and a stroller full of gear.

Currently he is moving south a lot faster than we are.

Just by the way, if you appreciate the audacity of what Jamie is doing, you’ll be pleased to know that he is an awesome chap and is raising money for charity as he goes, so drop by his website and see how he is doing: 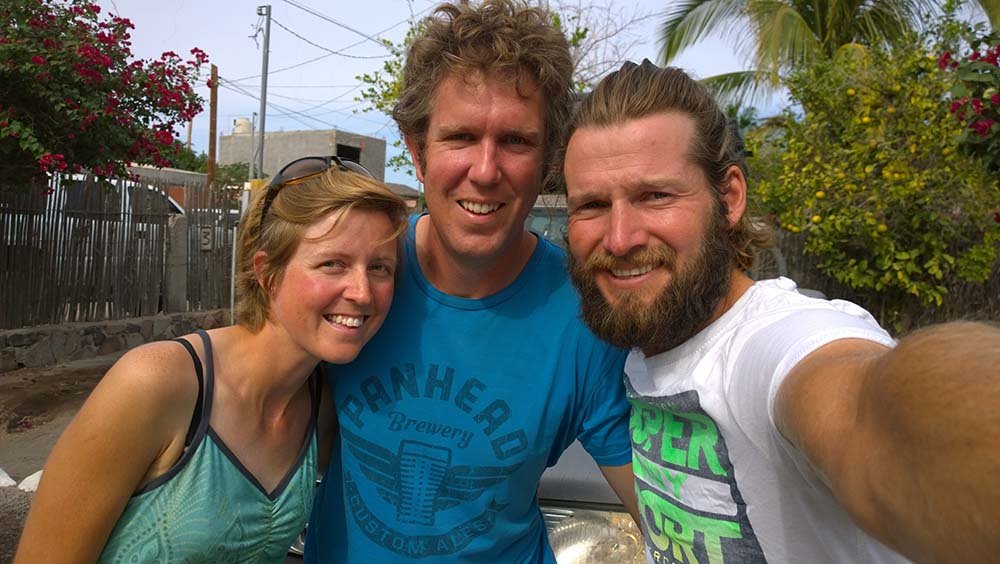 Here’s the photo of two lazy Flightless Kiwis with Jamie, cheekily pinched off his blog Jamieisrunning.com

By the end of our time in Loreto, we had seen a lot of different travelling options, slow, fast, people-powered, luxury accommodations, ground tents, pop-up campers, vans, two wheels, four wheels… the options are endless. Ben may now be a little jealous of people with vehicles with indoor space to hide from the elements (and still being able to stand up). However, we are both glad we’ve taken the non-people powered option, so the vehicle and tent we have are definitely right for us and right for this trip…

It was in between meeting all these amazing people, eating, drinking, (sometimes) sleeping (the chickens and parties were loud) that we felt ourselves falling under the spell of Loreto. A peaceful, lazy town, where life is easy and problems melt away. We can see how people end up coming back here every year for 18+ years. It is one of the few places where we have found it easy to just stop, to relax and to take life at a slower pace. 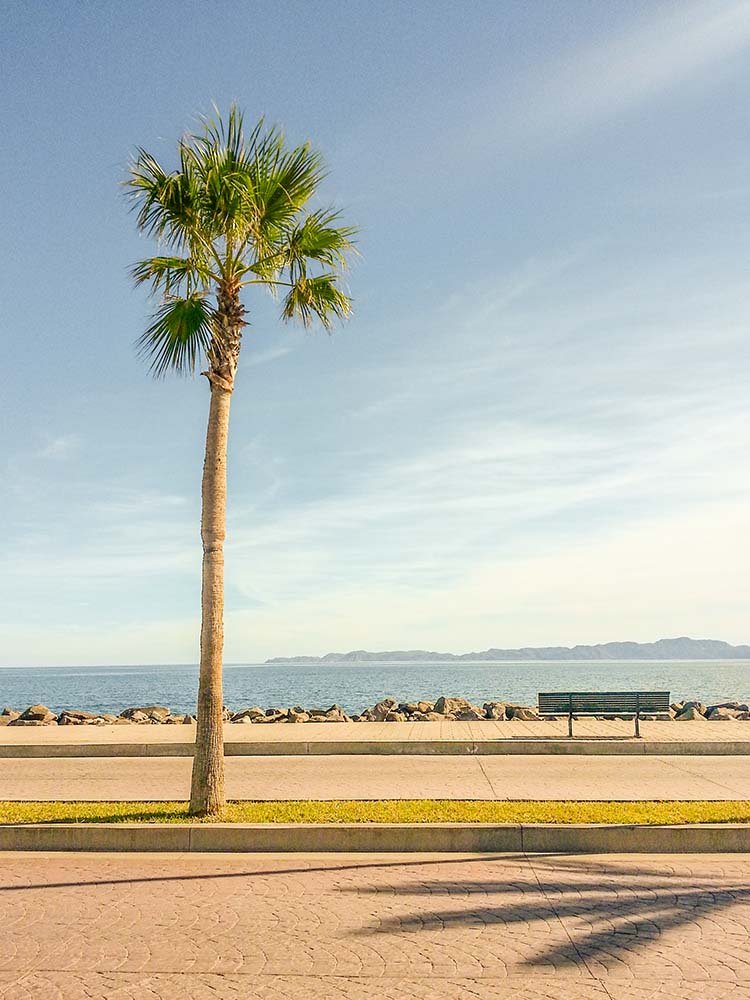 A peaceful morning on Loreto’s Malecón

This meant that our seven days in Loreto soon turned into eight… then nine.

But we can only handle so much peace, quiet and relaxation—after that, seven plus months of being conditioned to move every day or two got the better of us. Our feet started to itch, the call of the road became an overwhelming roar—we decided it was time to investigate the next adventure. It was time to see what was waiting for us around the corner.