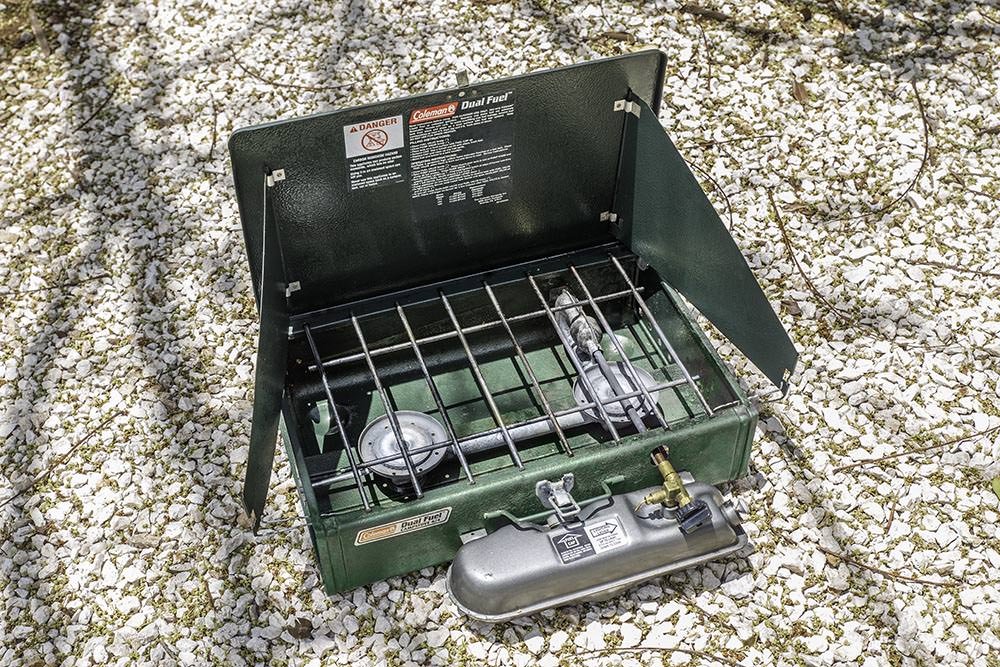 When you wake up in your tent, it’s several degrees below reasonable and has been raining all night—The first thing you want is a hot cup of coffee … and bacon and eggs for breakfast. Maybe a pancake or two… by then it’s morning tea time and time for another cuppa.

is exactly what you need for those times when faffing around in the rain isn’t high on your list of priorities.

With a few pumps of the handle the cooker roars to life without fail… that’s what has happened for us so far anyway. 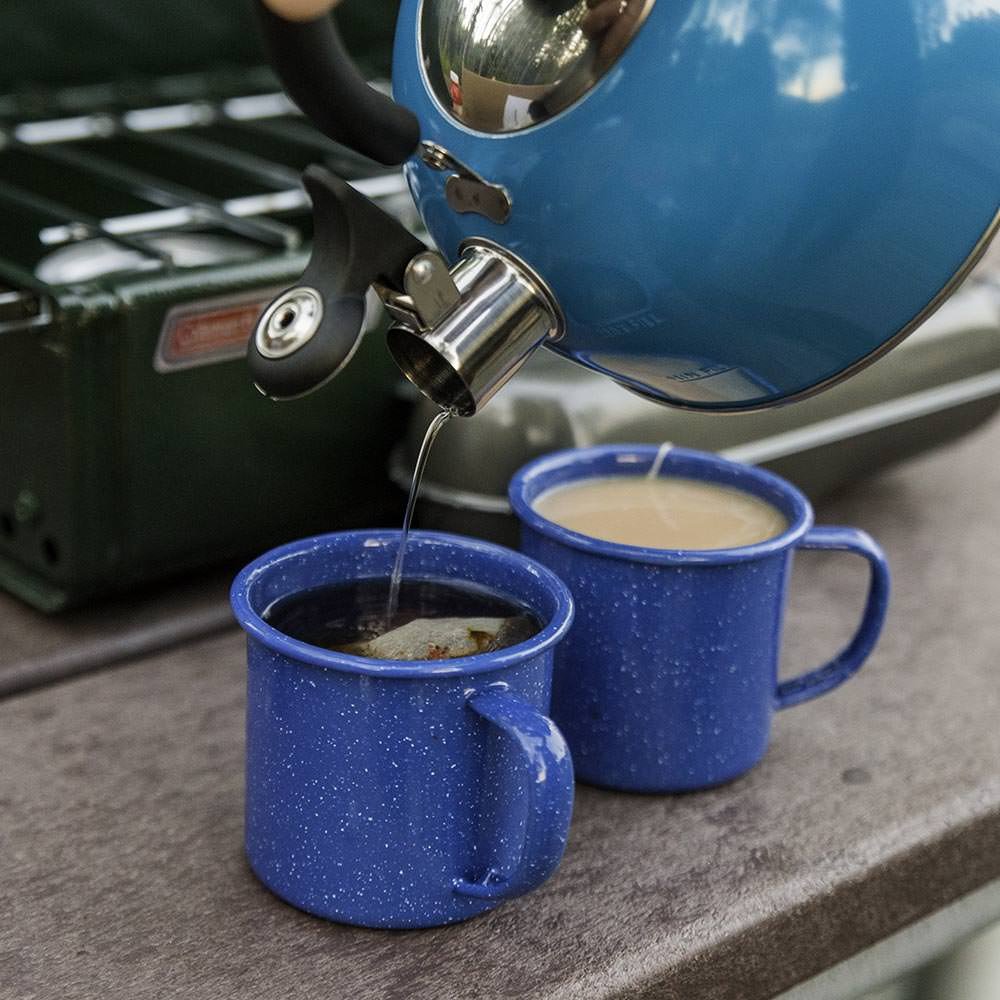 Can’t function without the morning cuppa…

We bought this after Brenton and Shannon from Ruined Adventures recommended it to us. The assumption was that if theirs was still serving them well after 2 years driving the Pan American Highway, it should do just fine for us. The Coleman stove has been, and still is, one of the best pieces of gear we have.

Ours has been dropped, crushed, knocked around, beaten up and it still keeps going strong. It no longer sits flat either—It had a brief encounter with the concrete of a residential street in Brooklyn. The concrete won, but the now slightly wonky stove soldiers on. It also had an encounter with Emma’s big toe—the stove won a resounding victory here, but we can’t hold a grudge, it is the primary source of hot coffee and omelettes.

We had heard acquiring propane in Central and South America could be problematic. Having the option to cook with unleaded gas (which is not in short supply in most places), made a whole lot of sense. Additionally, we believe this feature would make it a great stove to have on hand for an emergency kit. 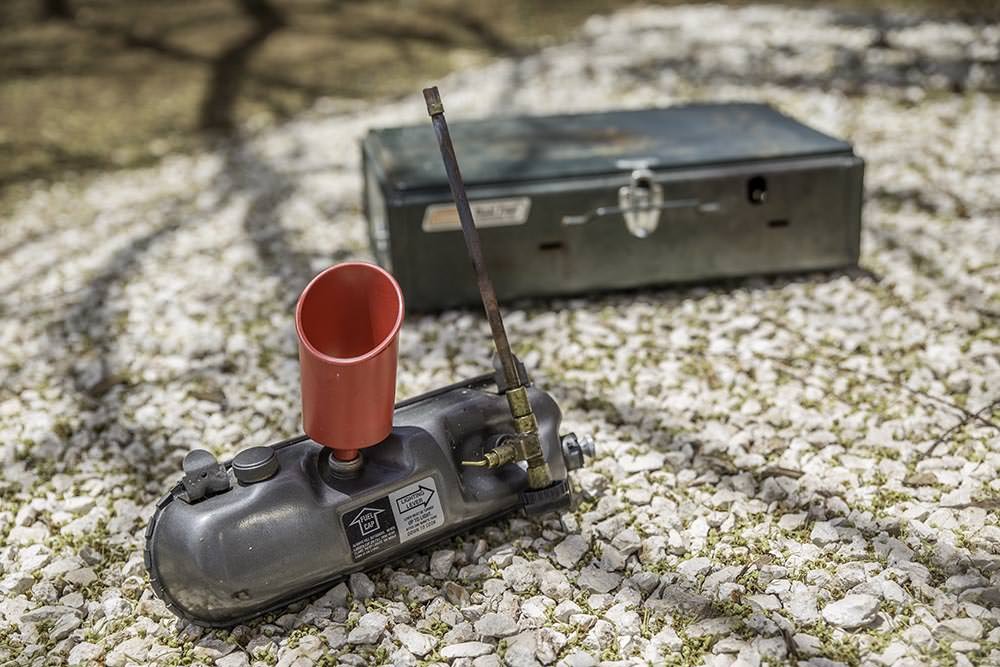 The detachable gas tank, complete with funnel that includes a filter to keep the larger lumps out of the tank.

We have been cooking with this for the last eleven months and at the very least, it gets almost daily use boiling water for the morning coffees. 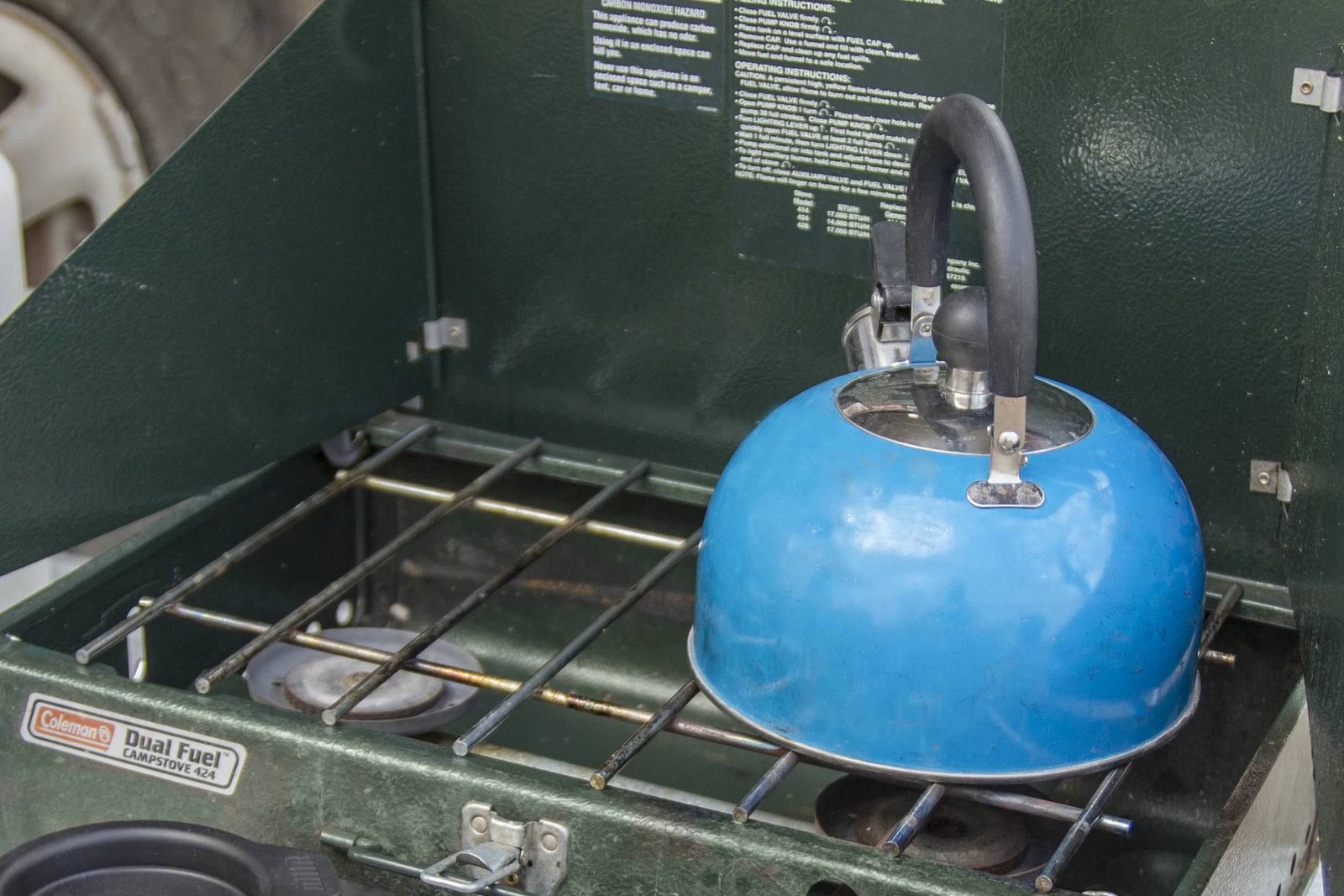 A typical morning for our Coleman stove.

Running this stove is a little more complicated than just firing up a gas element. To get the stove going you need to attach the gas tank, and pressurize the cylinder by pumping the handle. You then turn the lever up, ignite the element, wait a minute, turn the lever back down and then you are ready to cook. So there is a bit more fanfare than just turning on the gas and lighting the element. However, this process doesn’t take too long once you have the hang of it. Also, if you forget these instructions they are written on the inside of the lid. 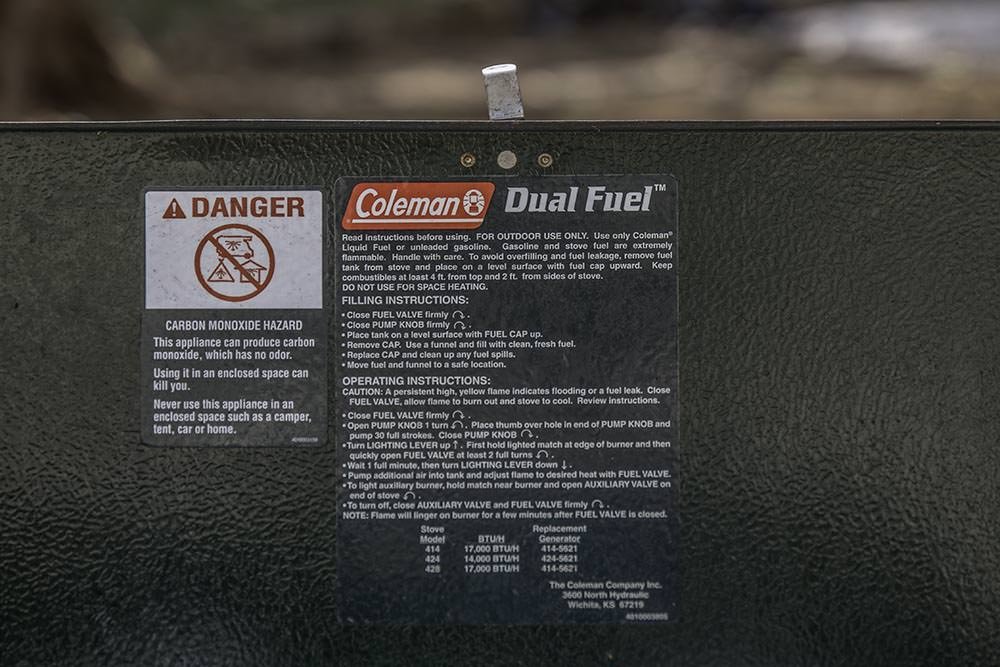 So the instructions are pretty long, but it all makes sense once you’ve tried it out a couple of times.

For such a powerful unit, it folds up relatively small, but is certainly a road-tripper stove.  At 17.75-inches by 11.5-inches by 4.875-inches when closed, it isn’t something you’ll be taking into the hills when you are off wandering about on foot. 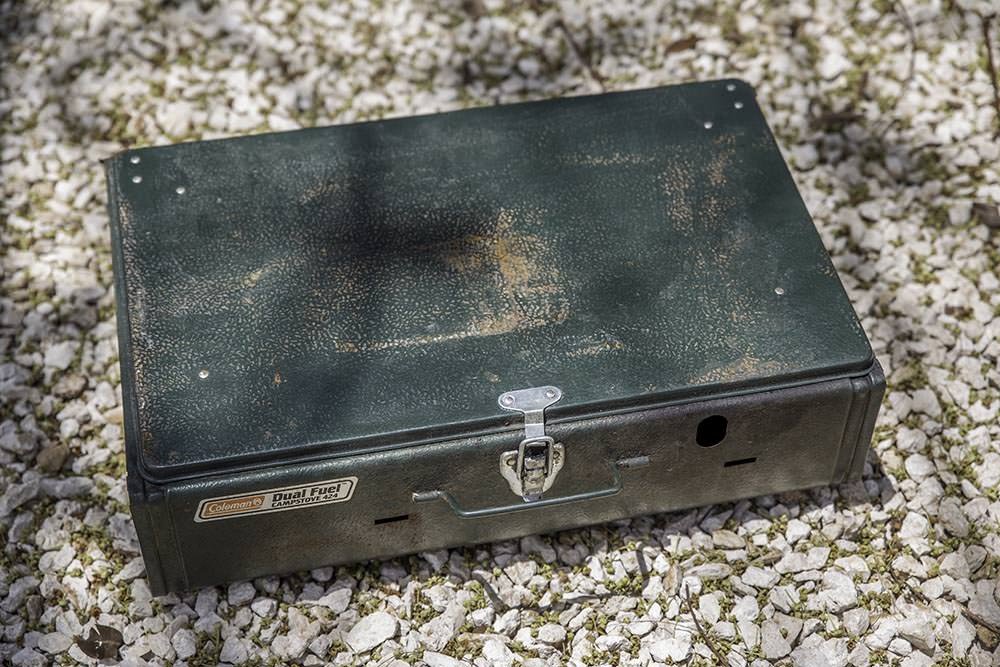 It all folds up into this little package. Ours looks a little worse for wear…but still going strong!

The cooker has two elements, the main element is a 7,500BTU (really hot) burner and the second is supposed to be a 6,500BTU (not as hot) burner. We agree with the rating of the main burner but doubt we are getting the advertised BTUs with the second. All the second element seems to be good for is simmering or keeping a pan warm. We’ve taken ours apart to make sure nothing is blocking the tube etc, but just can’t find a way to improve it. However, after the beating our cooker has had over the last few months we’re surprised there’s not more wrong with it.

We have thoroughly cleaned the stove several times. If you’re just giving it a quick wipe between coffees, it’s fine. However, if the chunky vegetable soup boiled over last night and cooked itself to every single surface—then cleaning can be a deeply emotional experience and will require some disassembly if you want to get it all.

The stove itself appears to be very weather-proof, it has been stored on the roof-rack for most of the time we have owned it. In that time it has faced rain, snow, freezing conditions, the baking heat of Death Valley, dust and salty ocean air. None of these challenges seem to have had an adverse affect on the stove’s functionality, although perhaps this is the reason for the outside of the stove looking a bit worn these days.

The wind-guards are pretty effective against adverse weather as well, usually with a bit of creative positioning we have been able to cook without too much trouble in high winds. There have been a couple of instances in the time we have had this stove where we’ve needed more shelter than the wind guards alone could provide. We’ve found these to be a big improvement on the shelter included with our former briefcase-style single burner camping stove.

If anything was going to be at the top of our post-apocalyptic top ten must have items list it would be this. Well, maybe second after something to make short work of those pesky zombies… 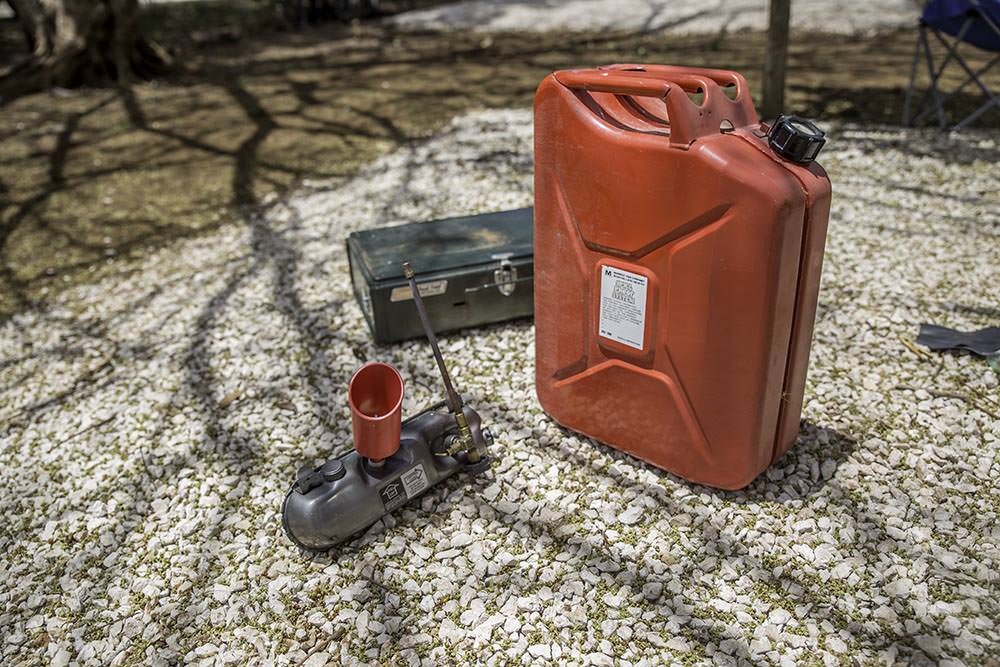 We recommend filling from something a little easier to manoeuvre than this large jerry can. But it does the trick.

In conclusion, this is one of our favourite pieces of gear on this trip. It has served us well so far. There is nothing major to complain about with any of the ‘cons’ we’ve listed for this stove. Out of all the downsides, the difficulty in cleaning it is probably the most annoying. The positives however, vastly outweigh the negatives, so we will happily keep using this stove for as long as it can survive the ride on the roof-rack.

Do you have a camping stove that you love?

Do you think you know of a camping stove that is better than this one?

Let us know in the comments section below: