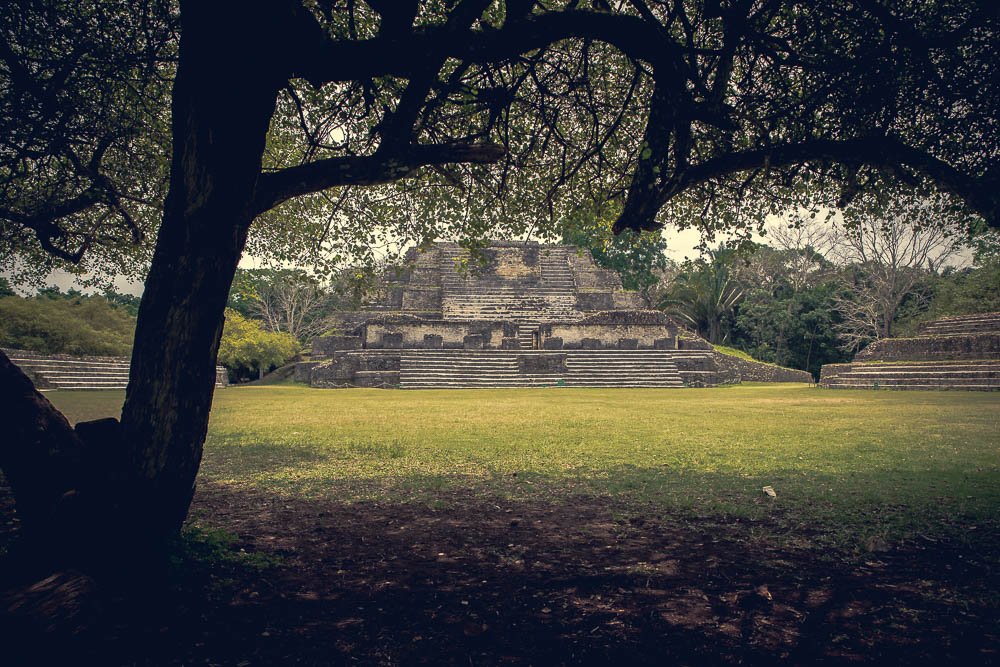 After much effort we managed to drag ourselves away from the peaceful beaches of Sarteneja.

It was time to see what else Belize had to offer apart from amazing beaches, gorgeous seaside towns, tropical islands, spectacular snorkelling, friendly people and fantastic sunsets.

The first stop was in the town of Orange Walk.

Why were we visiting this town with a strange name?

Sorry to disappoint, but it was simply to hole up in a hotel room with speedy wi-fi and get a bit of work done. The town is also conveniently located half way between Sarteneja and the Lamanai ruins. Belize, it turns out, is home to quite a number of Mayan ruins.

We checked in to a hotel room not a minute too soon. The heavens unleashed before we were even fully settled. Thus began the first downpour of the rainy season.

This is one of those occasions when not only are you glad to be working, but you just can’t wipe the smug ‘I’m not sleeping in a tent tonight’ grin of your face. 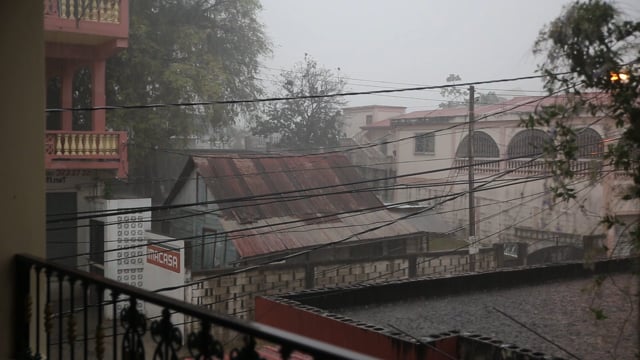 Very glad not to be out in this storm.

We were even more pleased to find out that there was a top-notch bakery just around the corner. These guys made such delicacies as bread alligators—or is it a crocodile, I can never tell. Not one of their tastiest items, but certainly right up there on the fun-ometer. 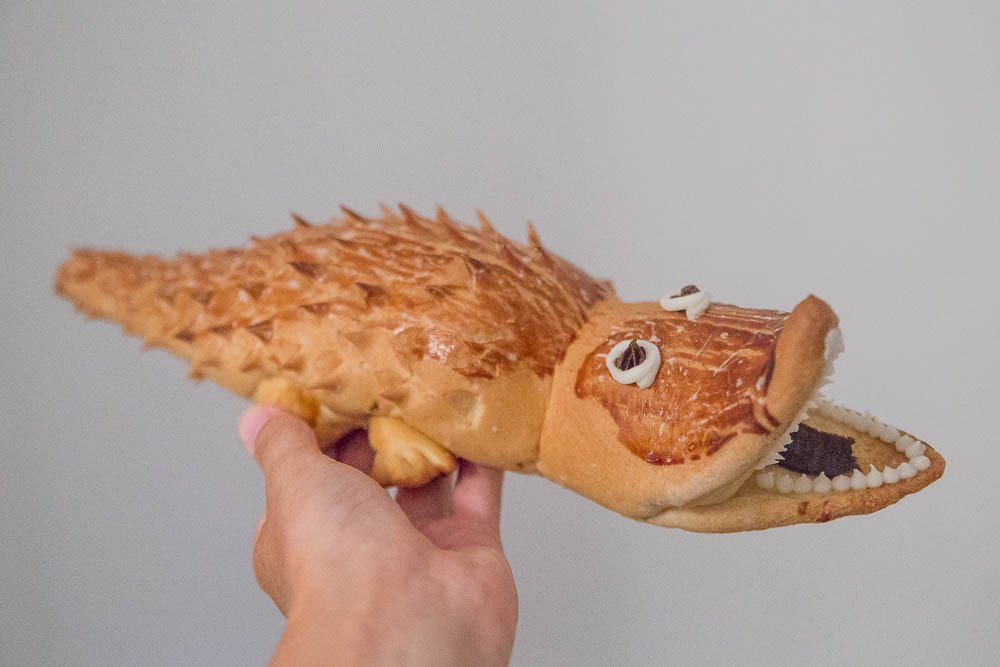 It almost seems wrong to eat this little guy. We shall call him ‘Lance’.

Unfortunately, Lance was too edible to live. Sorry Lance.

This town with the strange name was also home to two Chinese restaurants. There was the ‘Excellent Restaurant’ and the ‘OK Restaurant’.

We dined at the Excellent Restaurant. 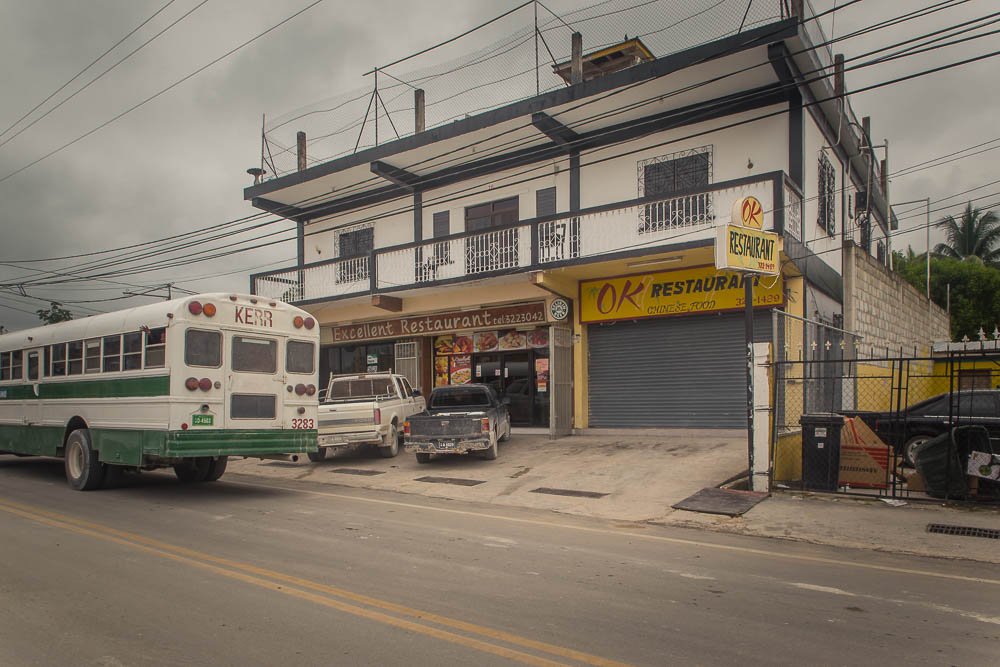 The tough decisions one must make whilst travelling overland are never ending.

Most people take the boat from Orange Walk, because it is convenient and affordable and not everyone drives their car to Belize. We however, are not most people, so we drove.

The roads to the ruins took us through some Mennonite communities.

We had arrived in Belize knowing very little about the country and were surprised to learn that there are quite a number of Mennonite communities located throughout Belize. These communities range from quite modernised (with cars and other technology) to very conservative (travelling only by horse and buggy and avoiding modern technology). This means that when driving through areas where lots of the locals are Mennonites, it is very common for the only other traffic on the road to be horse drawn buggies. 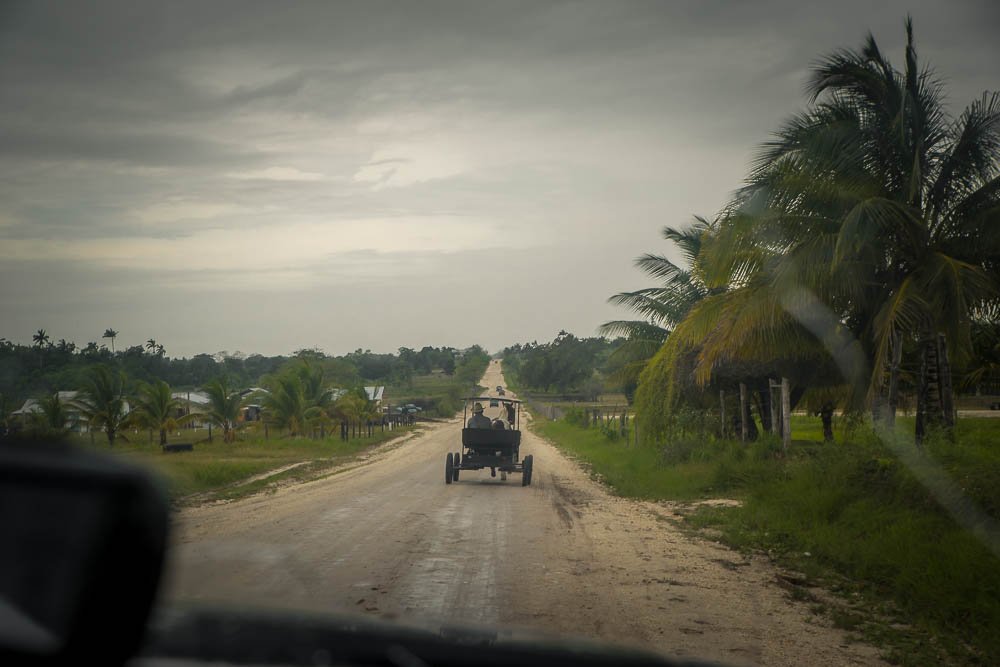 We avoided any incidents on these bustling highways plied by fast-moving farmers and Mennonite families in their carts, arriving safely at the Lamanai ruins.

To the terrifying roar of howler monkeys. 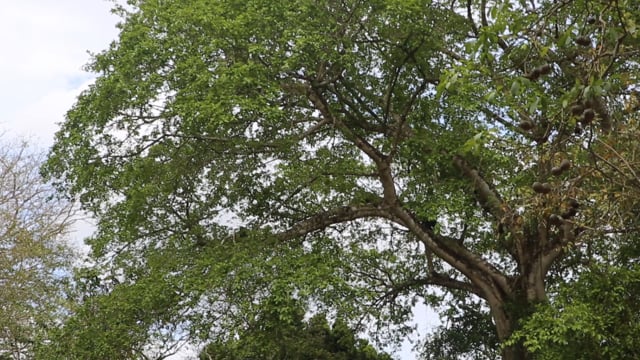 That’s right. That terrifying, rumbling death-roar, that guttural thundering howl of monstrous, horrifying creatures of the jungle is in fact being made by sweet, adorable little monkeys.

It does however create a very dramatic and atmospheric soundtrack for a visit to some ancient ruins, especially those enveloped by dense, misty jungle.

We’re not sure that the ruins at Lamanai would rank as the most spectacular Mayan ruins we have visited (although they are expansive and very well restored). However their location—still safely cocooned in the ancient jungle that once obscured them—was very atmospheric. Also, the background cacophony of what one would normally assume to be huge dinosaur-like creatures—with with an appetite for lost tourists—did make this one place we will never forget.

We had the ruins mostly to ourselves as we spent the morning exploring. This is a good way to start the day.

A terrifying stone face emerges from the mist.

Climbing around on some ruins.

You can still see some of the larger trees that swallowed portions of the ruins, when they were covered in jungle.

A glimpse of an ancient ruin through the jungle.

Despite the jungle location, they still had some very well-manicured paths.

From there, we wanted to head to San Ignacio, but we made a quick overnight stop at Crooked Tree wildlife sanctuary on the way. We didn’t really see much wildlife while we were there. But then again, we didn’t really look that hard either. 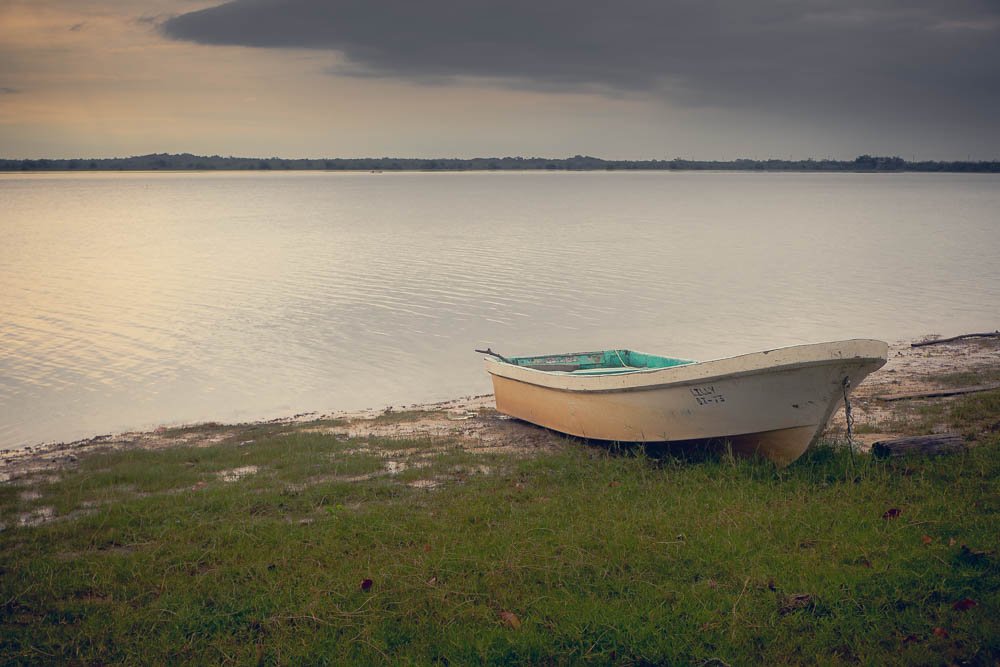 The warm glow of sunrise over the calm lagoon.

These were the birds we saw from our camp spot by the lake. A couple of cormorants. 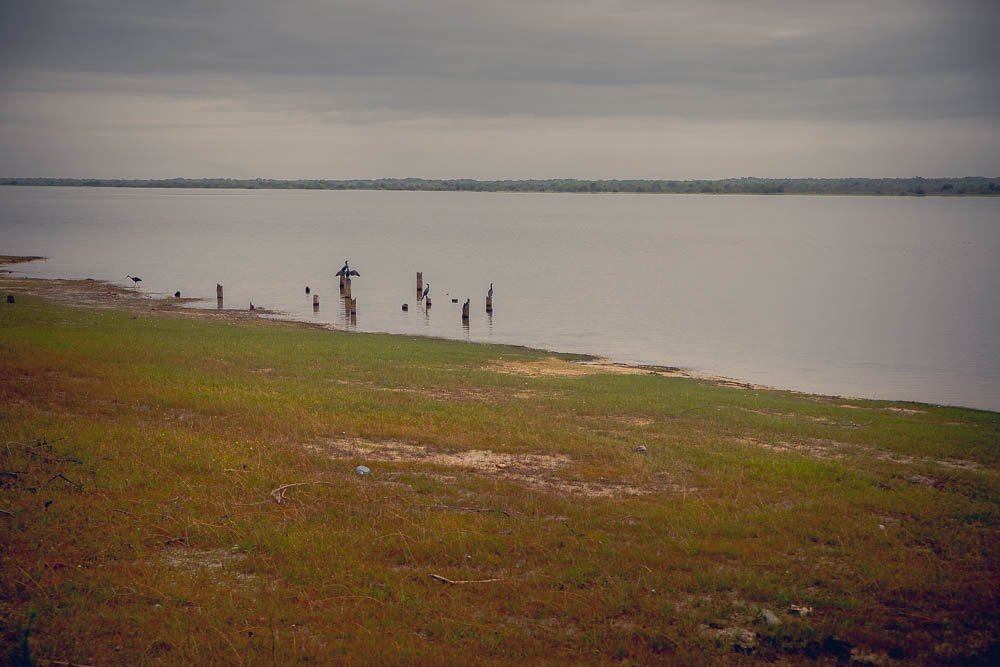 Not much wildlife right here.

And this guy. However, I’m not sure that Buster counts as wildlife. He was good company though. 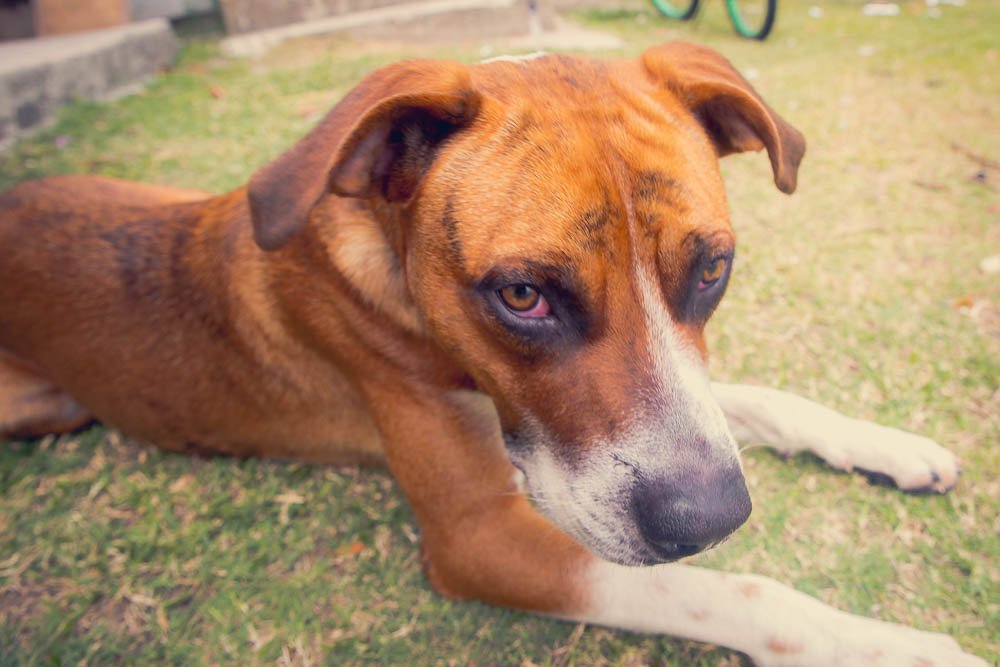 This time it was the ruins of Altun Ha. Again we were there bright and early, to beat the crowds and the heat. But this time we weren’t as impressed. No howler monkeys, no jungle, but some pretty grand pyramids nonetheless.

Also, apparently this particular site is the home of the temple depicted on the Belikin beer bottle.

Belikin beer is the surprisingly tasty national beer of Belize that is served in normal-sized bottles made with a lot of extra glass so that the internal volume is significantly smaller than your standard stubby. We assume this is to comply with some legal requirement for selling alcohol in Belize.

The tiny 284ml serving combined with the extra glass in the bottle always leads you to think you have more beer left than you do. If it isn’t a legal requirement, we think it is a ploy by the Belikin beer company to sell more beer. There is a final, disappointing empty mouthful when you find that there is actually no beer left, just a heavy bottle. This leads you to respond ‘Sure!’ to the question; ‘Shall we have another beer?’ with far more regularity than you normally would. Luckily, they also serve buckets full of Belikin…

I digress—back to the ruins.

I suppose by this point we had really just seen enough Mayan ruins, Altun Ha was interesting, but it just didn’t capture our imagination.

While it is nice and all to see the famous Altun Ha ruin, deep down Ben would prefer drinking a cold Belikin.

It is quite a large site.

With a great view from a partially restored, rather tall pyramid.

So, with the taste of mild disappointment in our mouths, we made for San Ignacio, where we hoped to replace that taste with the flavour of a few deceptively small Belikin beers… oh, and some more ruins…

ancientarchaeologyBelizecampingcavedarkdrivinghotelMayan ruinsrainruinsstonewater
« Shall we go to Belize?
A journey into the underworld »