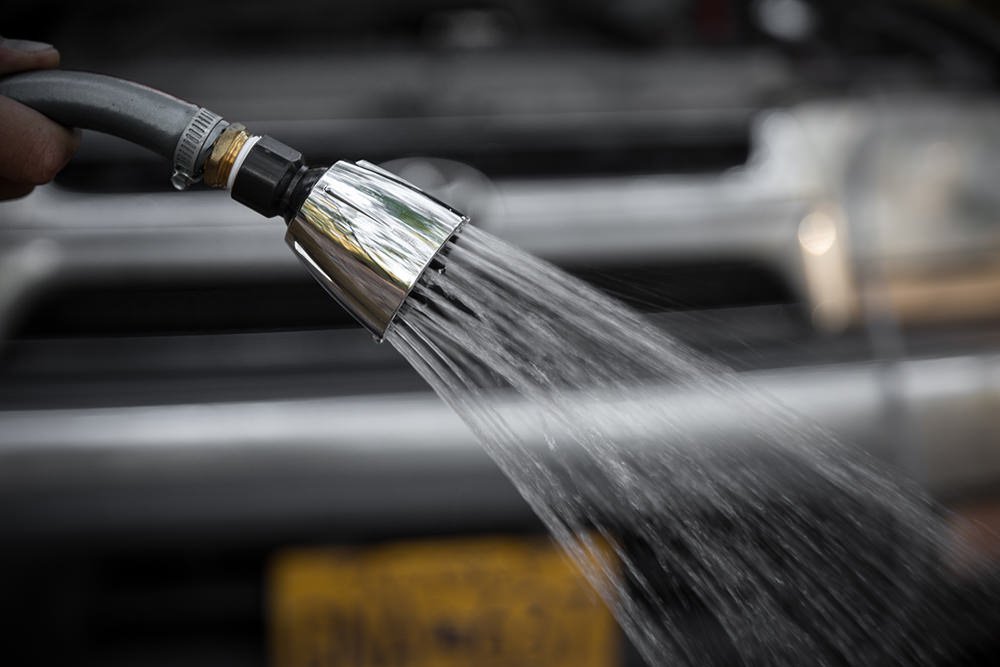 Oh yeah! Hot water at the touch of a button—or rather the attaching of alligator clamps… and a 15min wait for the car to warm up.

One of the creature comforts we have decided we cannot do without, is the ability to have regular hot showers. This is not only because we like to be clean, but we’d prefer that sharing a dingy shower cubicle with assorted insects was optional. Having our own shower simplifies free camping, removing the need to source regular showers.

We had seen a video of a chap who had installed a similar system on his Bronco so we decided to pretty much copy exactly what he did, no original thought required… excellent! First up, we ordered a heat exchanger and water pump. 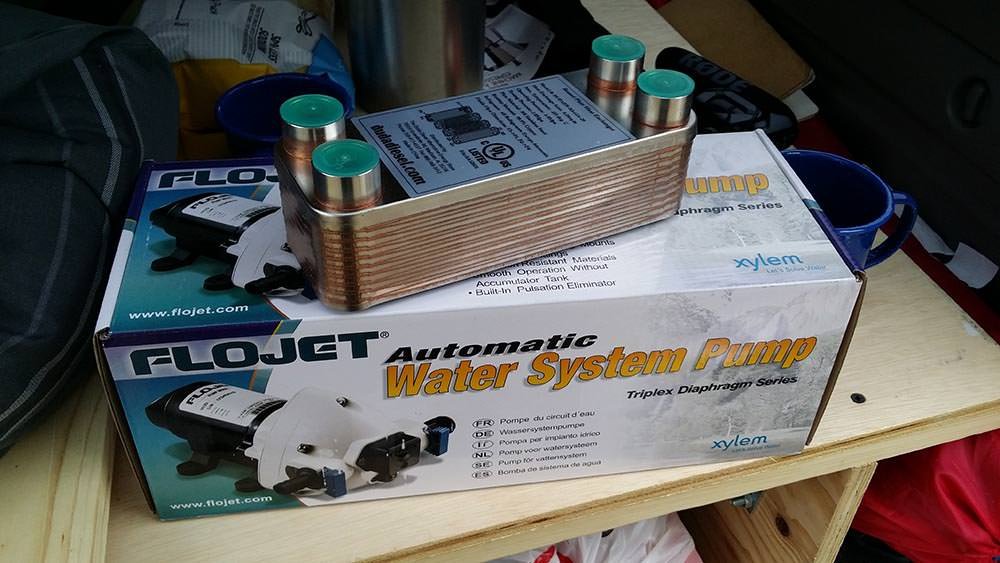 The heat exchanger came from a company in Alabama, called Duda Diesel and we bought the pump

off Amazon. We bought all the necessary fittings and hose from Home Depot (who then had their credit card system “breached”, but that’s another post).  We also bought aftermarket preformed hose to cut up for the required bends in the system. 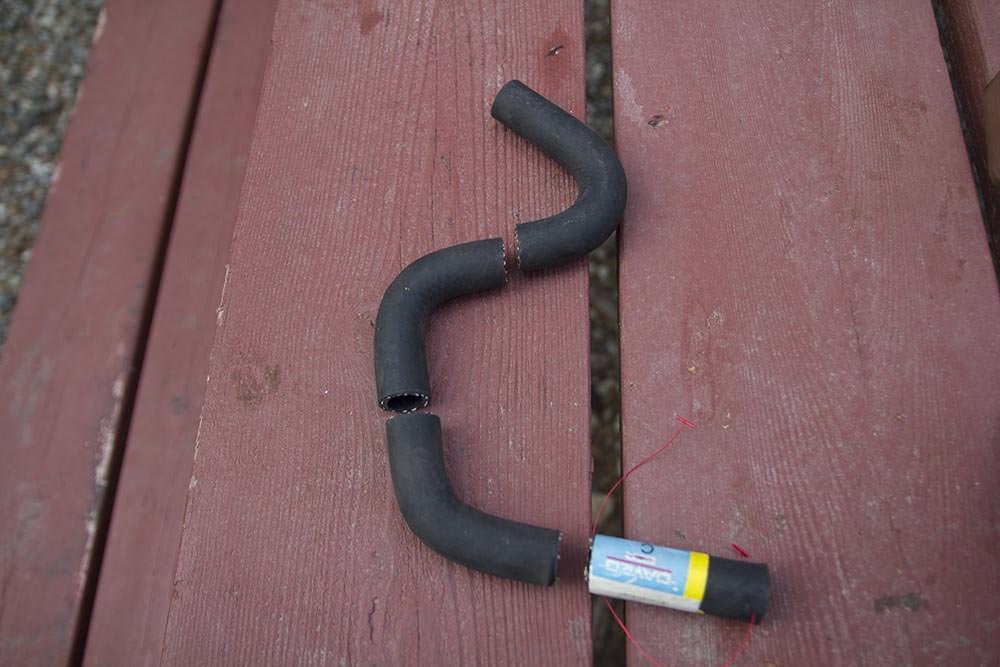 Preformed hose with bends cut out. 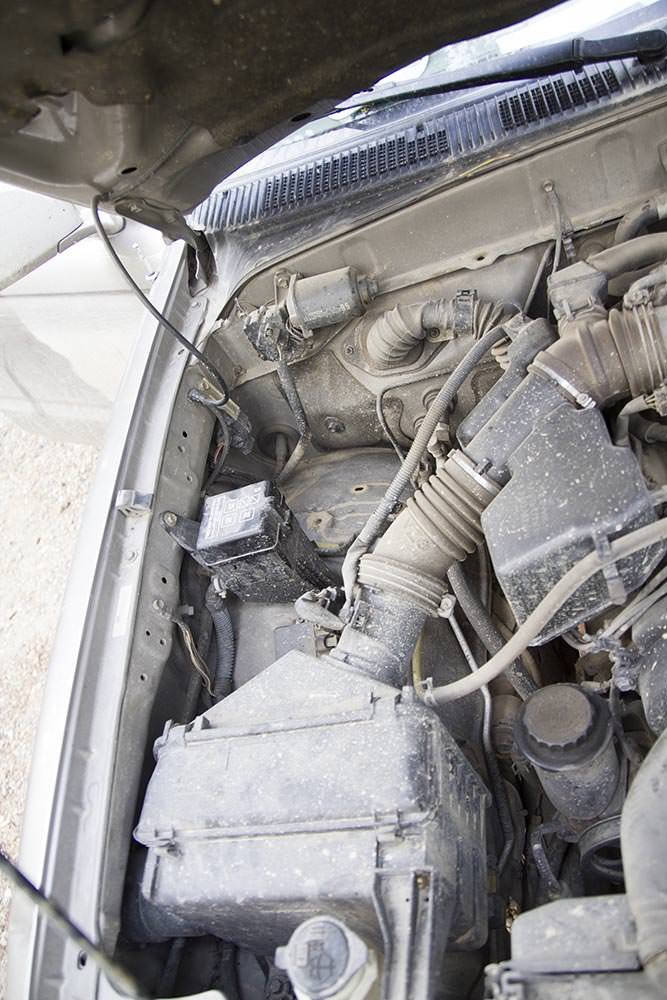 Empty space for the exchanger, close to the heater circuit. 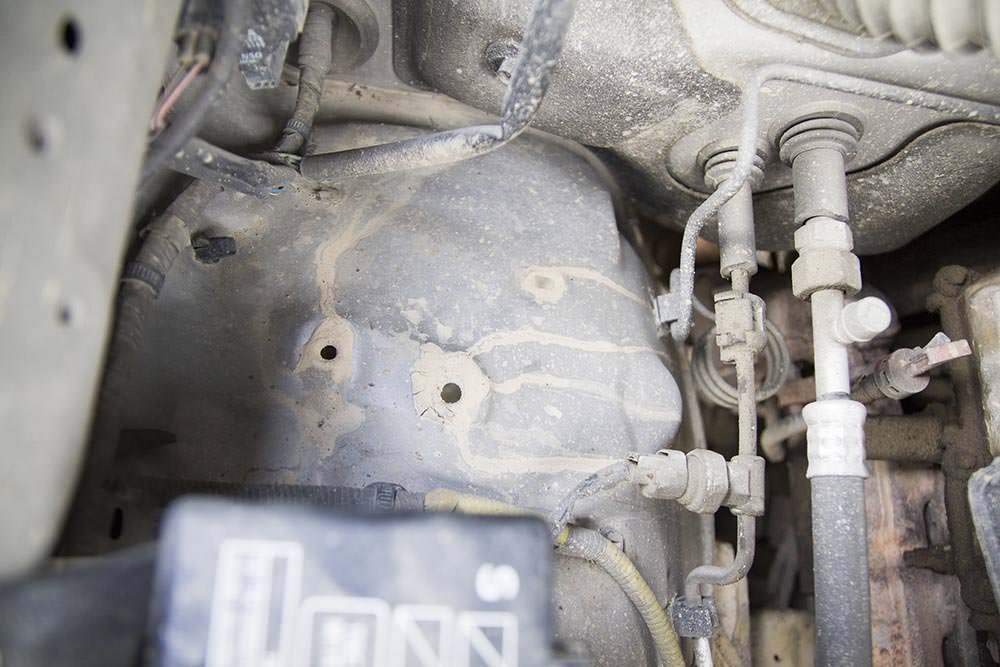 Making the bracket was fairly easy using some mild steel, a hatchet and a grate from a fire pit we managed to shape the bracket. 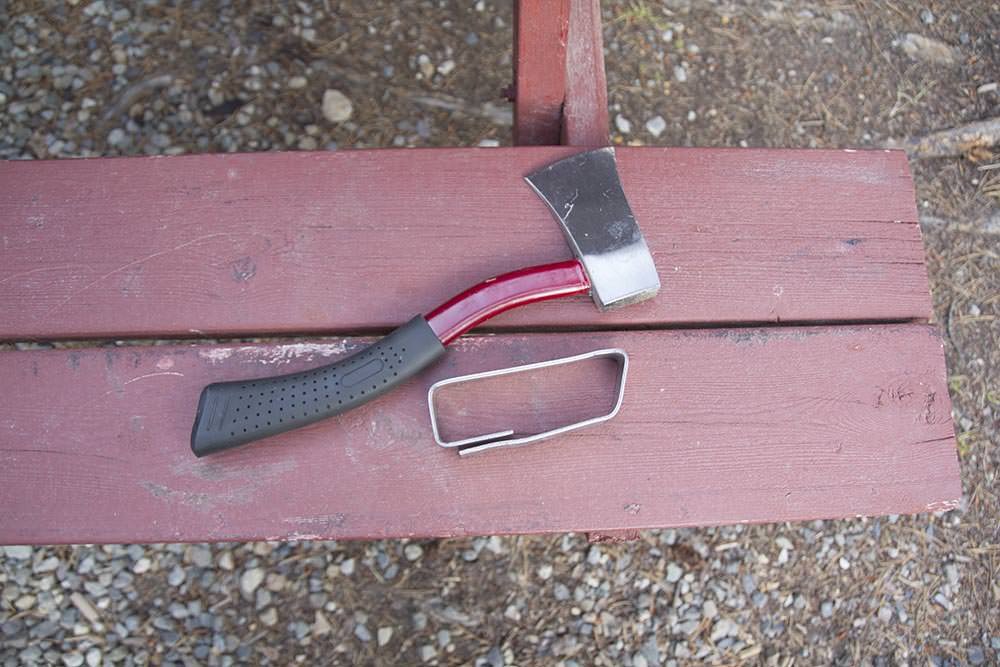 Bracket, bent  to shape using a hatchet and the grate from a fire pit. 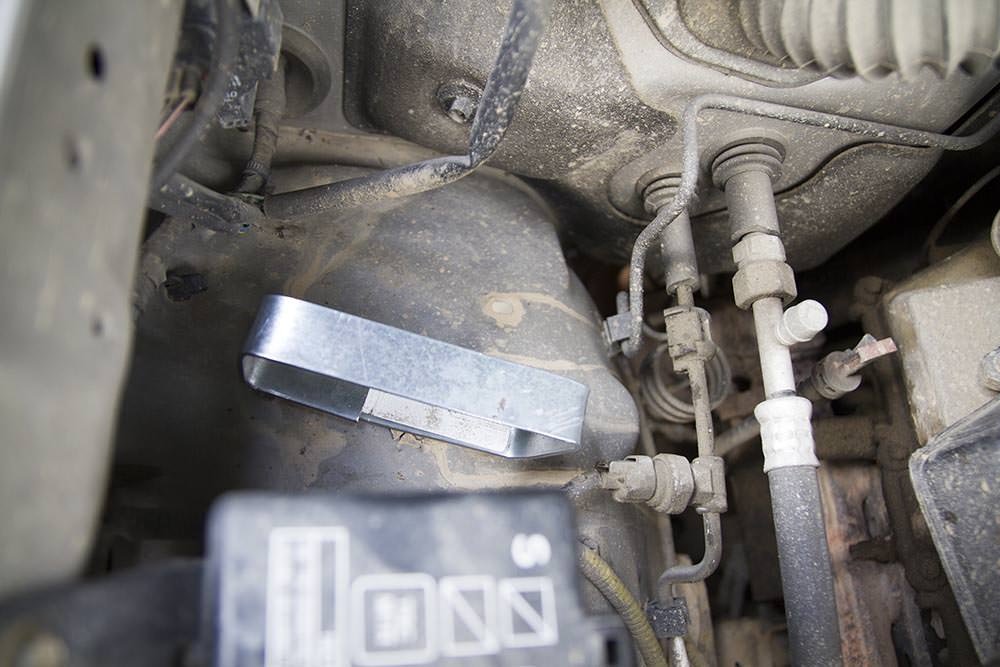 Once we had the shape of the bracket right it was simply a case of drilling the holes and bolting everything together. 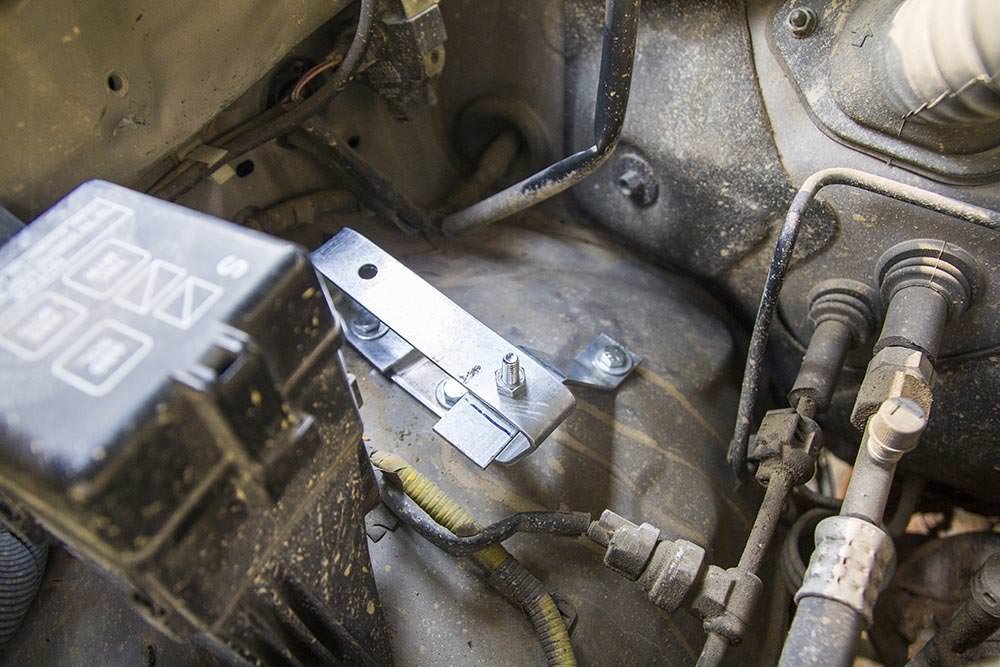 At this point, we chose to add a leg to stabilise the bracket. Although we never tried mounting the heat exchanger without the leg we assumed once everything was mounted, chances were, it would vibrate too much. It turns out adding the leg made it incredibly solid, so it was probably a wise decision. 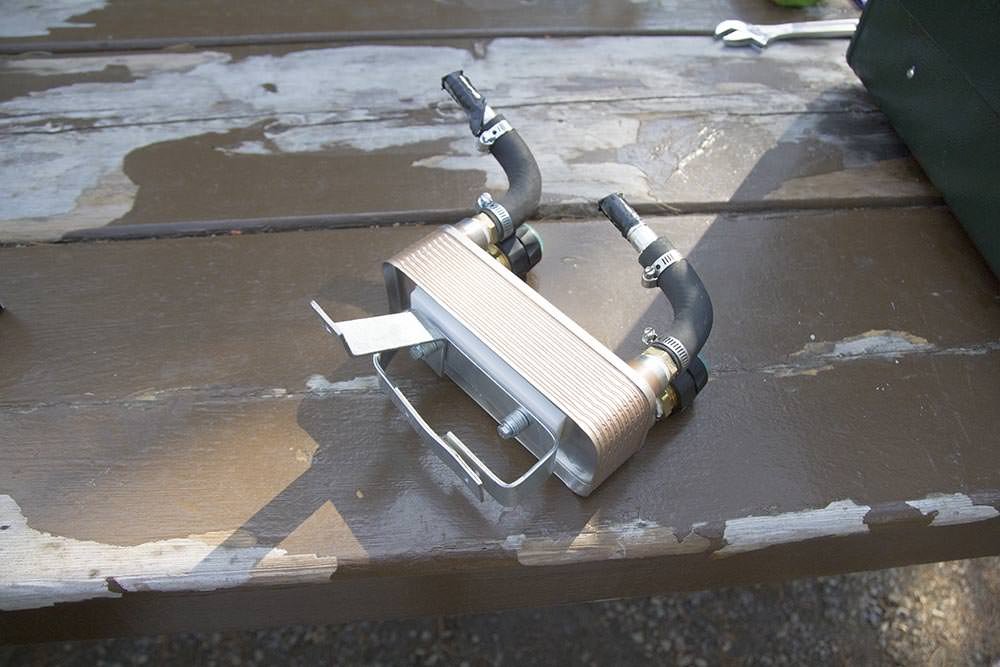 Heat exchanger and bracket ready to be mounted in the car.

Once the heat exchanger was mounted the hose from, and back to, the heater circuit needed to be plumbed in. The easiest way to connect the hoses was to divert the heater circuit after the heater valve and before the firewall. Not only was this extremely easy to do but also meant the temperature of the water can be controlled by the heater dial inside the car. 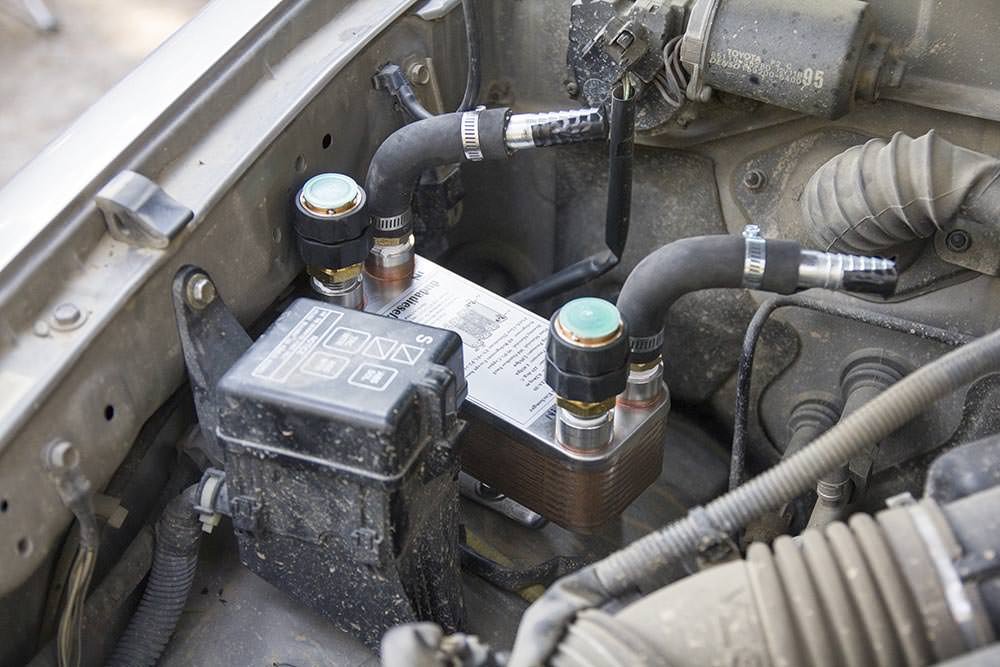 We used quick release garden hose fittings for the shower side of the heat exchanger.

Heat exchanger mounted and plumbed in: 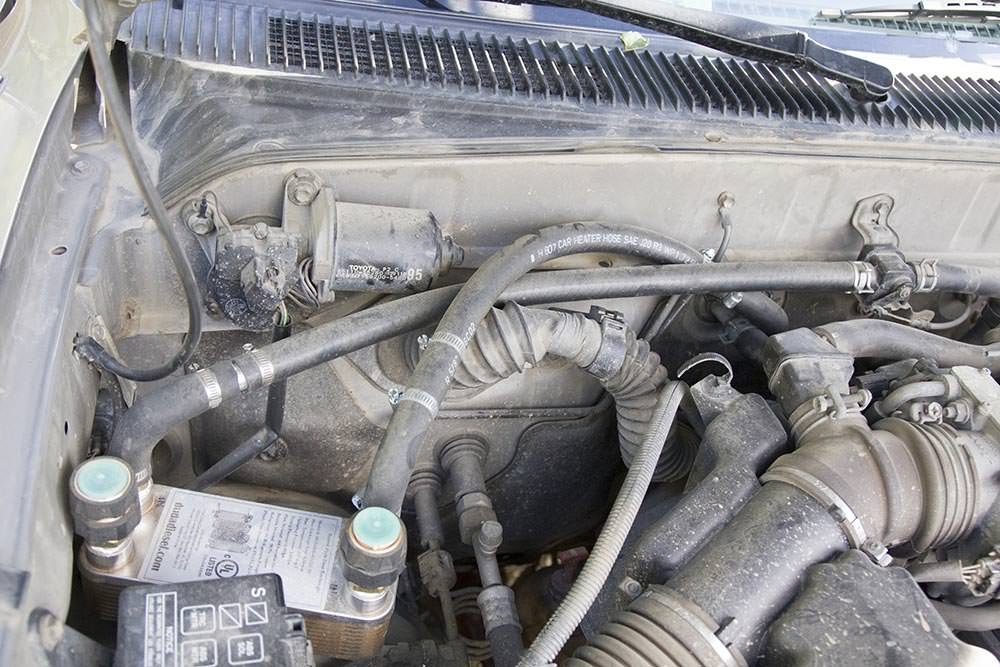 Initially were intending to buy the cheapest pump we could find. However, after some research we figured, at a minimum it needed to self prime. This means the pump can use a air-water mixture to reach a fully primed pumping condition rather than becoming air-bound (stuck). The pump we ended up buying not only self primes, but has a pressure switch so will turn on and off with the opening and closing of the shower head. This pump

also features snap in fittings which makes it easy to setup and breakdown. All we had to do to the pump was install an inline fuse, extended the wiring so it would reach the main battery and add a set of alligator clamps (recycled from the power inverter) and it was ready to go. 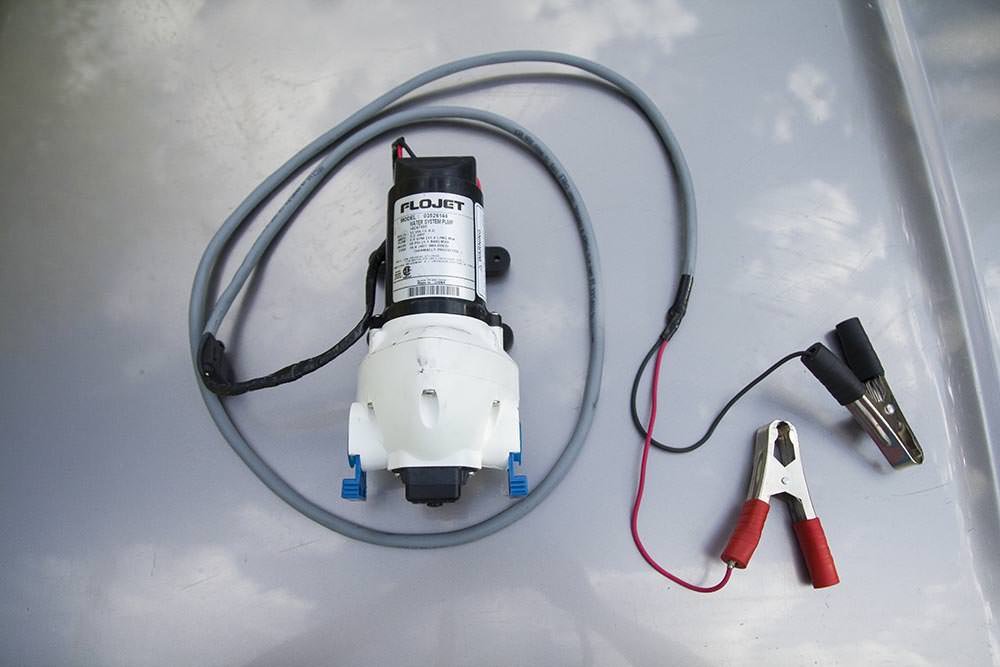 To make sure nothing gets in to damage the pump we installed an inline filter designed for use in home irrigation systems.  It is  simple screen in a housing that can be easily cleaned/replaced. $9 from Home Depot. 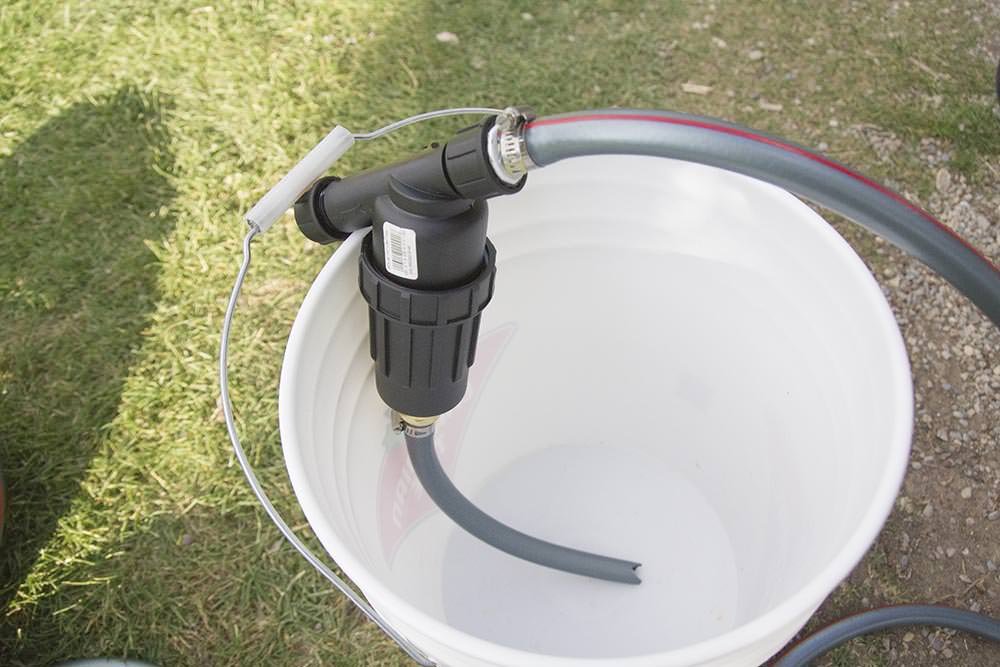 The hose assemblies are made up of the cheapest hose and metal fittings we could find. The shower side of the system consists of three hoses; water source to pump, pump to heat exchanger and heat exchanger to shower head. 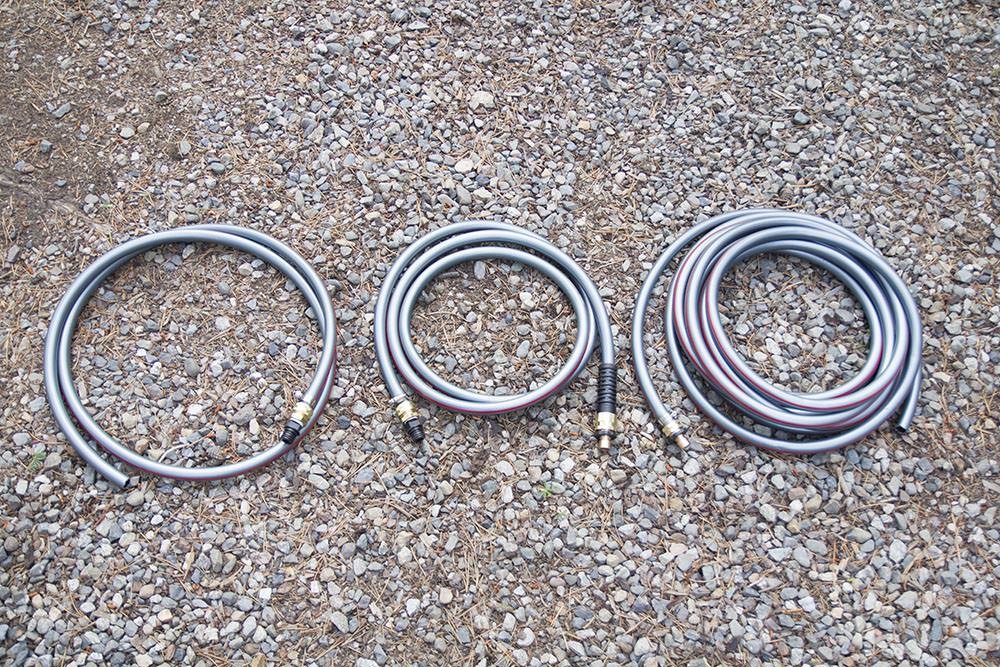 The shower only takes a couple of minutes to setup. 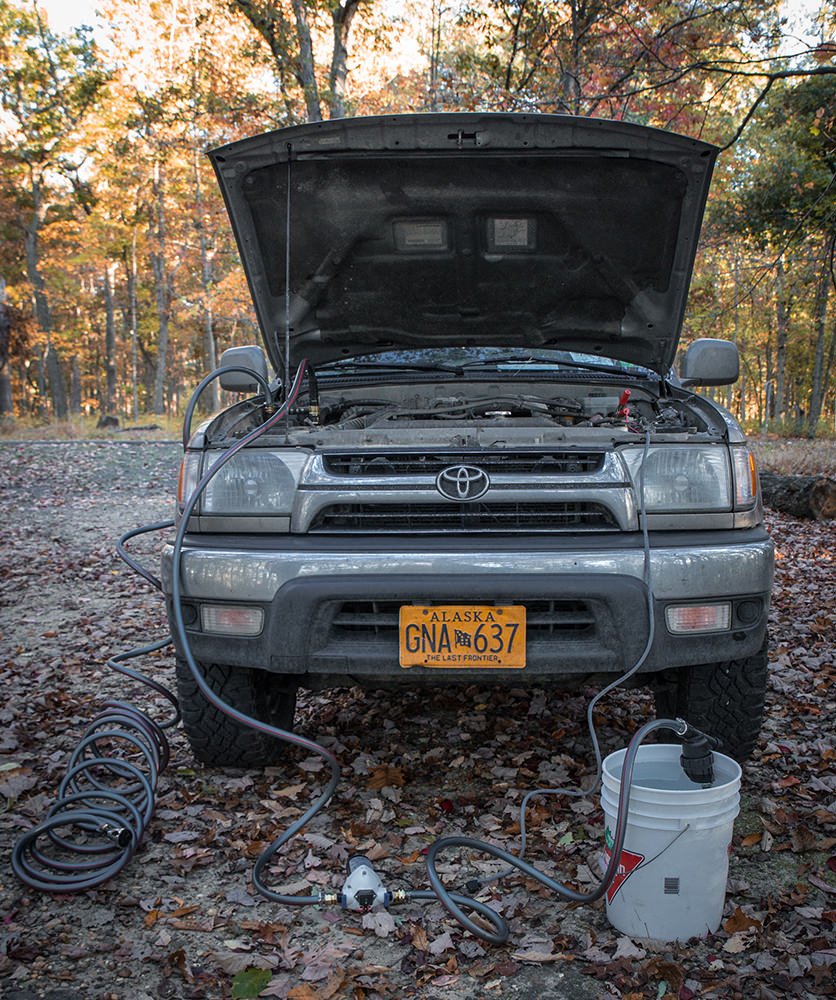 The full set up.

And the whole lot fits neatly into a 20L bucket. 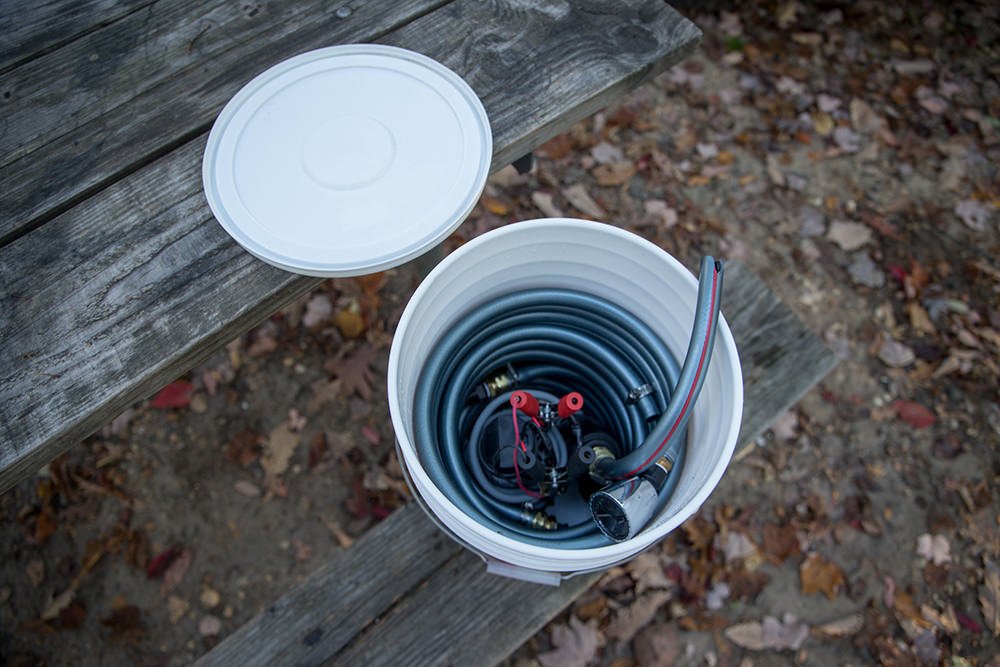 All packaged up, ready for transport.

comfortimprovementshowerupgradeupgradesvehicle
« No, Emma, you can’t have a puppy
Back in Alaska »