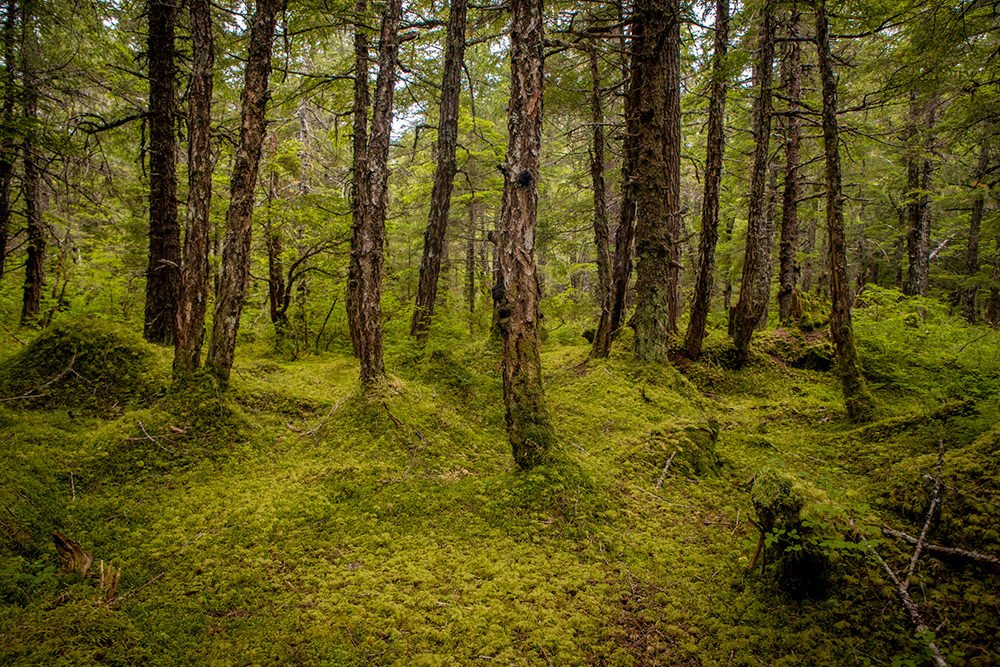 Let’s face it. Alaska is pretty darn amazing. We couldn’t resist returning. Our budget didn’t quite stretch to a long ferry journey, so on some local advice we opted to check out Haines and then take the short ferry trip to Skagway.

We are clearly deranged lunatics, because after complaining about the mosquitoes in Alaska. The first place we stayed in Haines was a nice free camping spot on the shore of—Mosquito Lake. Fortunately, despite the name, the mosquito levels were much lower than anticipated. We were woken in the night by the arrival of an angry swarm of Trumpeter Swans, but they moved on as soon as Emma threatened to take a photo of them. 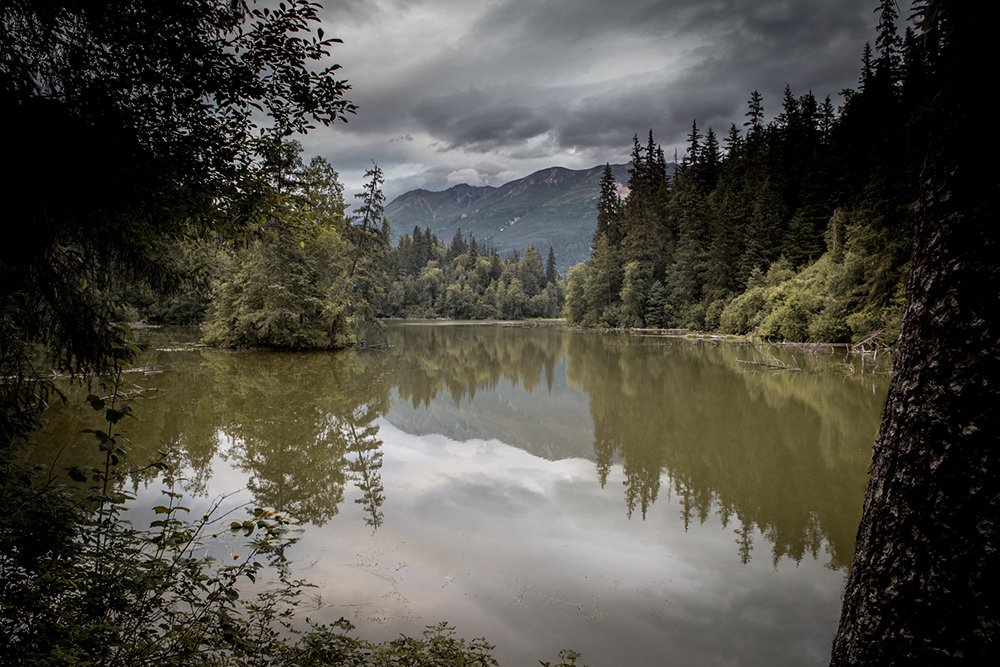 The next night we splashed out on accommodations. $12 a night gets you a spot here: 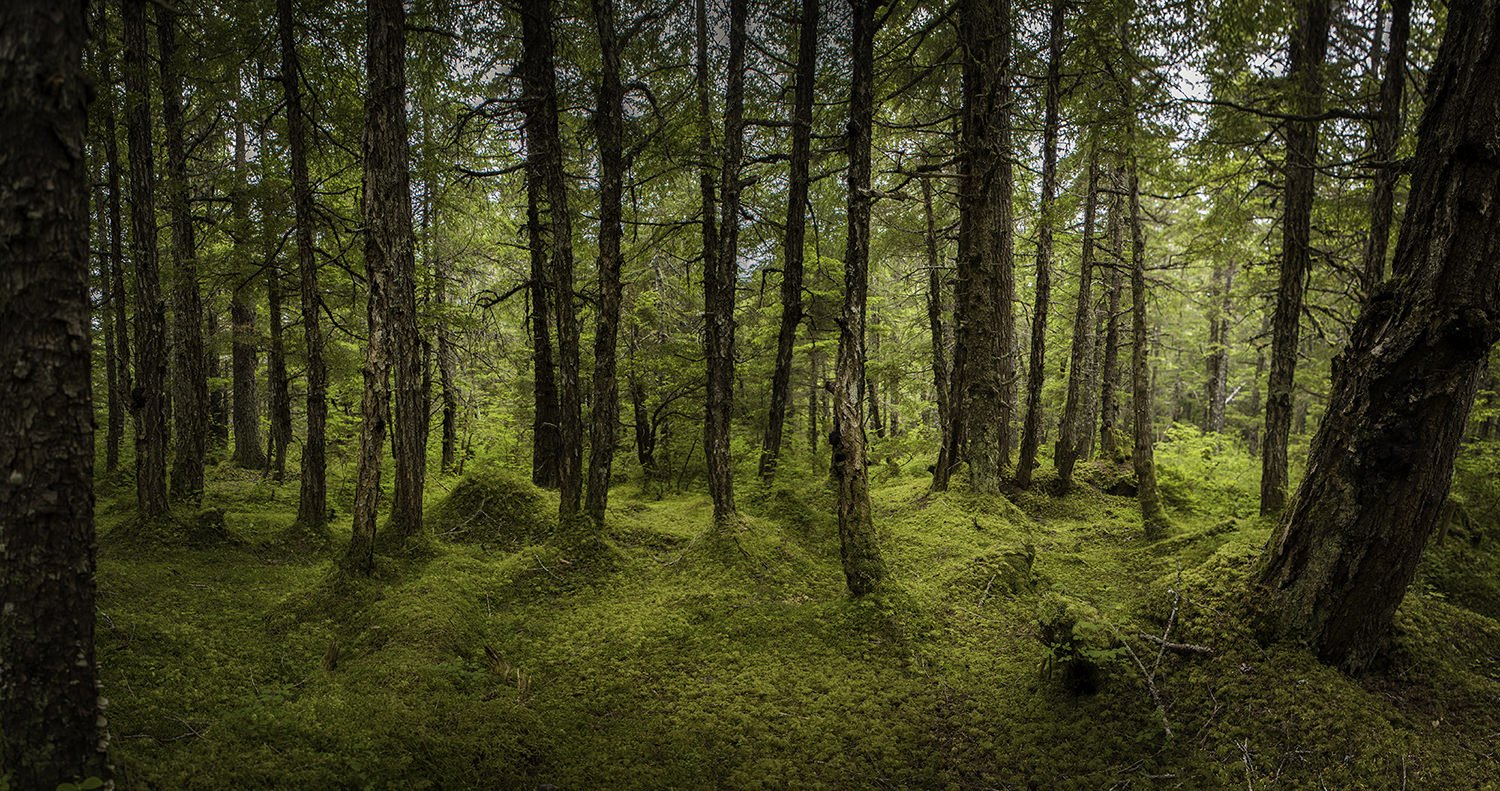 That is why it is so hard to leave Alaska. 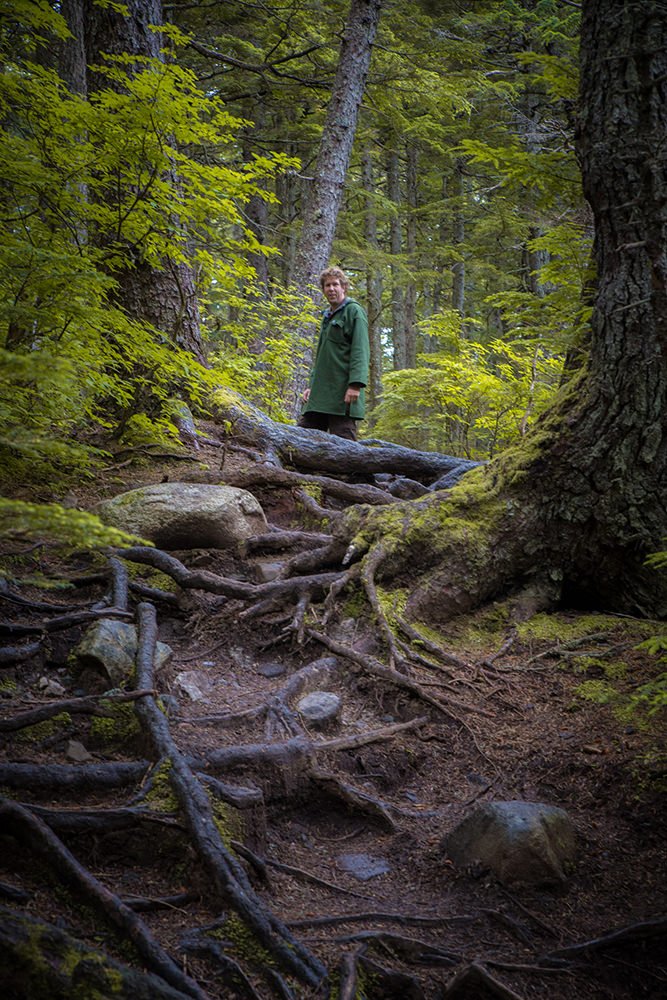 As we settled in for a cozy night nestled amongst the mossy trees, we agreed that we had been right, Alaska was just like home, but taller and with bears. 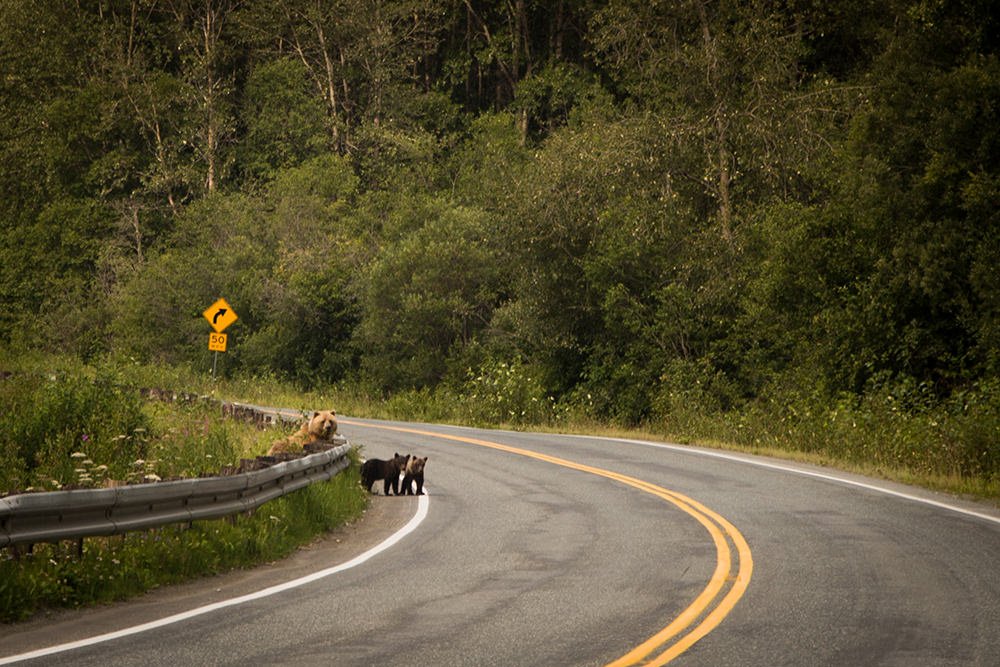 What we hadn’t factored in was how exactly like home it was—we were shaken from our sleep by an earthquake. Ben initially blamed bears, I blamed Ben, but we soon figured out that the real culprit was the ground itself once the neighbour’s car alarms started bleeping in a disgruntled fashion.

Test of new suspension and rooftop tent vs 5.9 earthquake. Success. A comfortable night’s sleep was had by all, despite the early morning shake up. 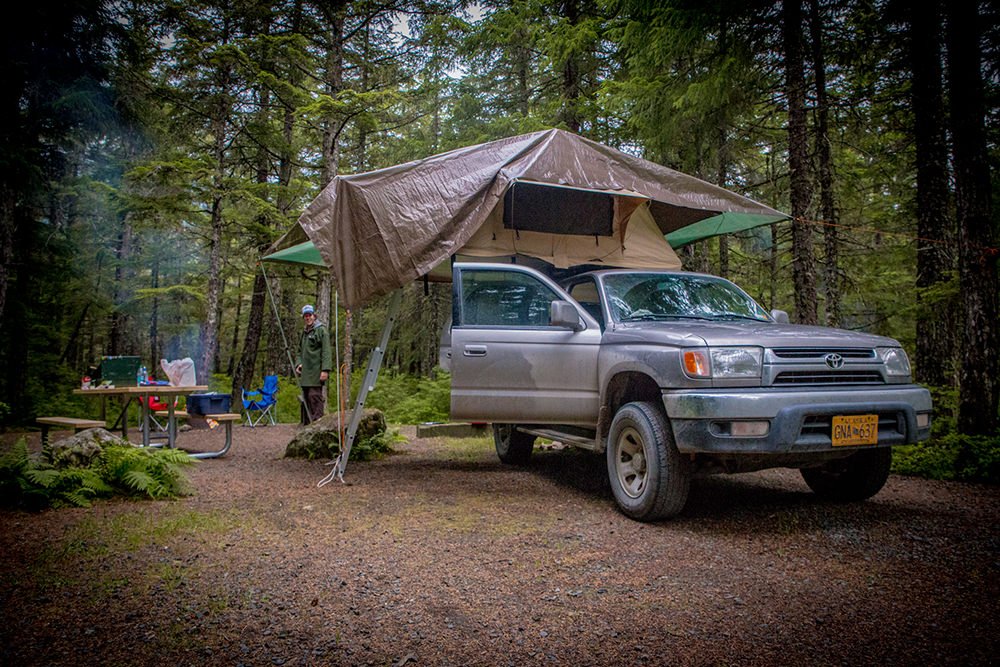 Haines has its very own hammer museum. Yes, it is a real place. They have a large collection, but despite a thorough search we did not encounter M C Hammer. 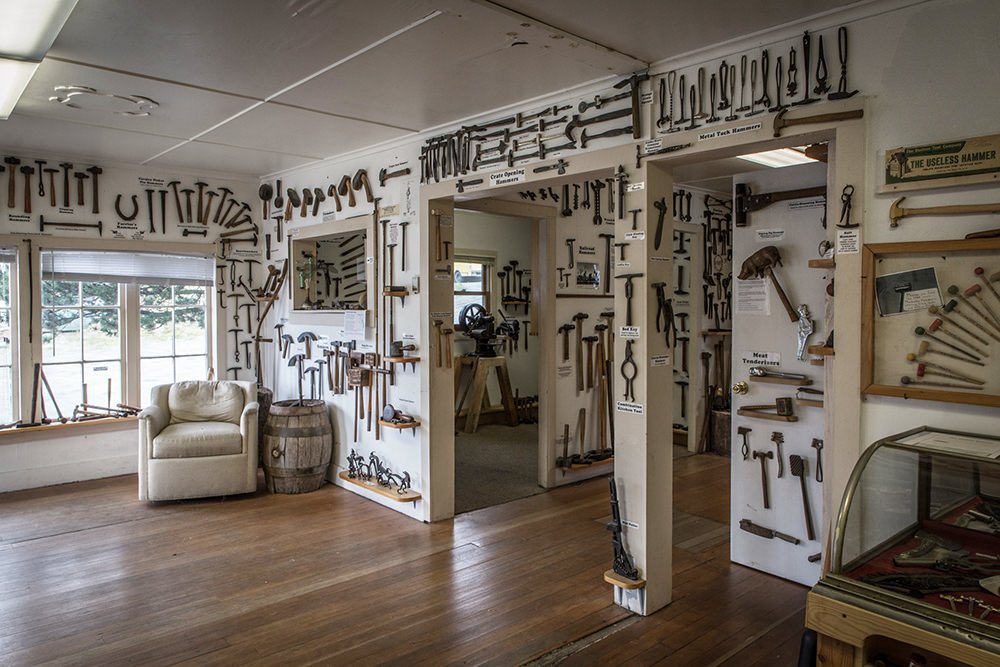 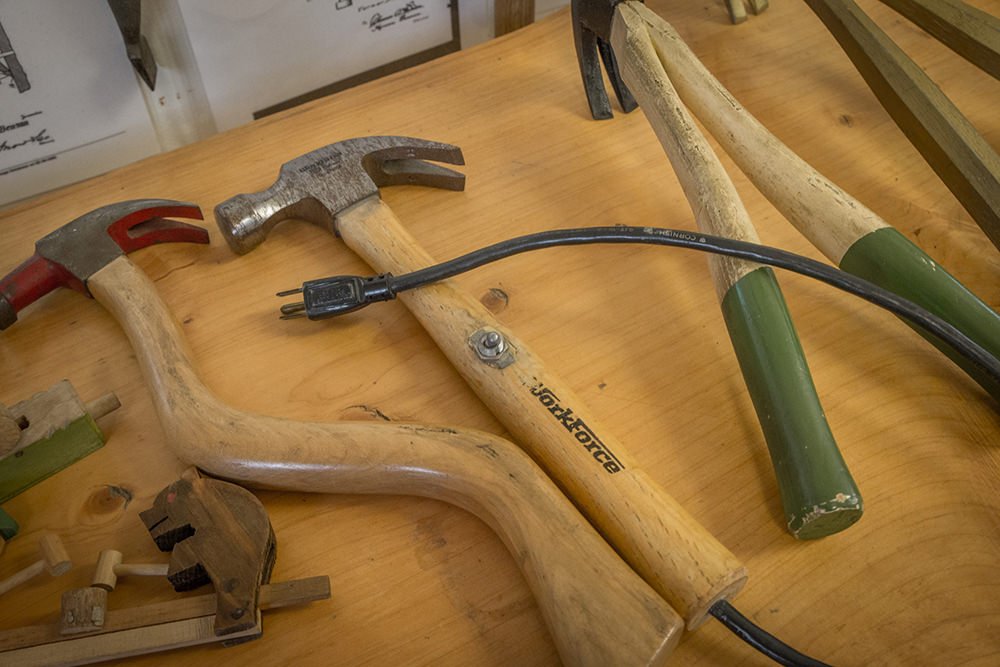 Haines will also be remembered as the place where we met Dylan, the world’s cutest known owl. 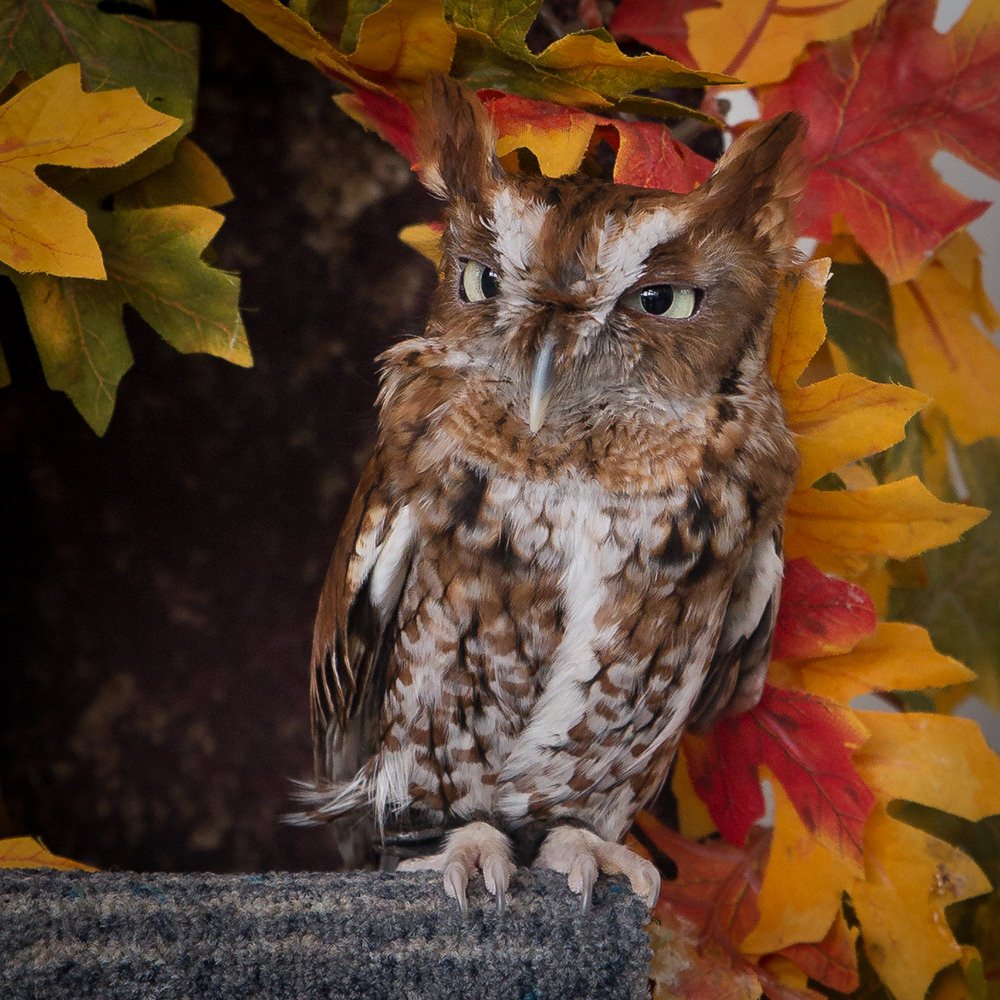 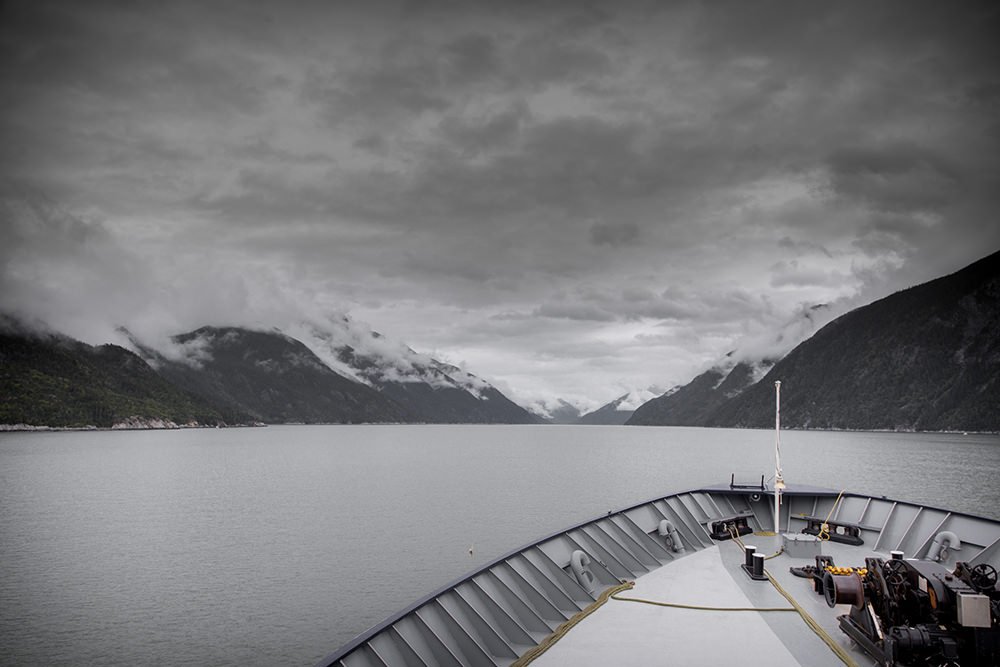 And headed to Skagway. 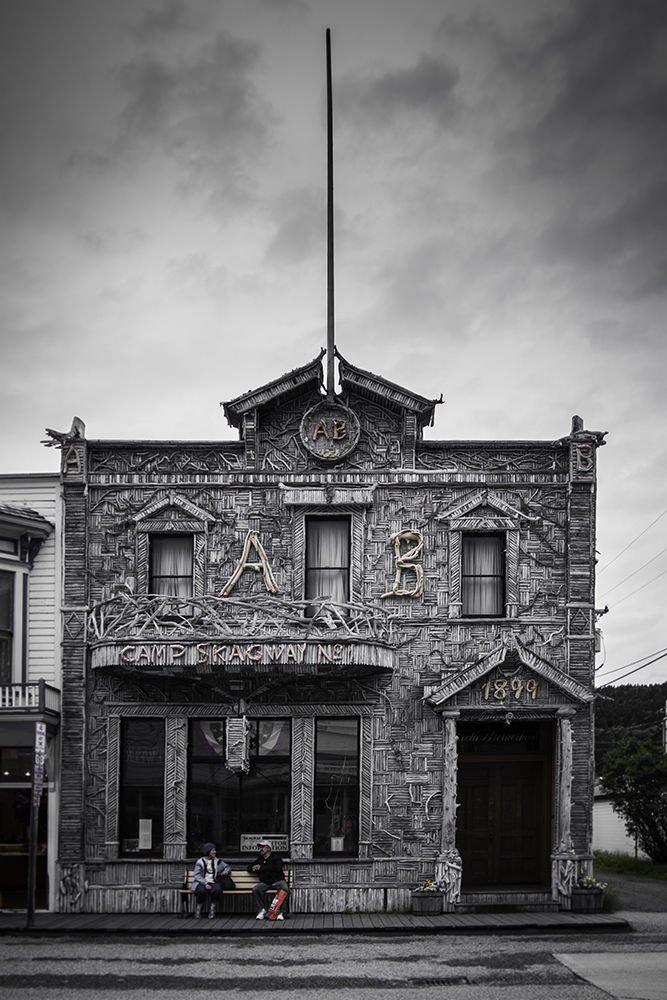 Skagway has plenty of cute old-timey historical buildings, much like Dawson City. But the difference is that Skagway appears to be specifically aimed at cruise ship passengers. Everything is pretty expensive and feels a bit superficial compared to Dawson City.

Perhaps if we hadn’t been complete cheapskates we would have gone on an afternoon trip on the White Pass railway, we’d been told that was a pretty great way to spend the afternoon. Instead we simply wandered around town, looked at some rocks, bought some overpriced incredibly disappointing popcorn and eyeballed this crazy contraption: 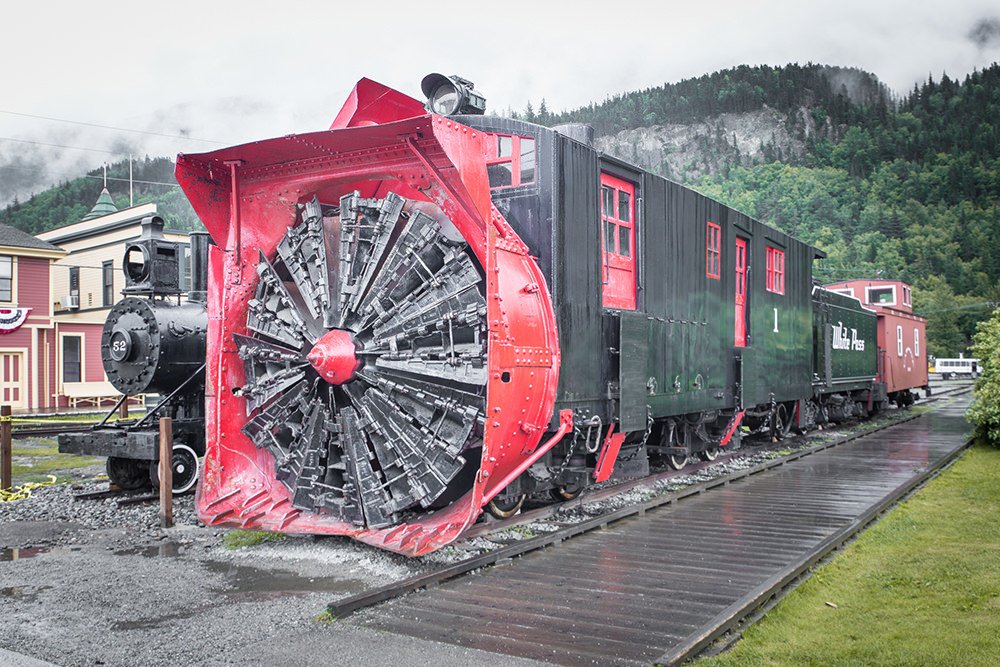 (That’s a terrifying looking snow plow on a train, not an old fashioned air-conditioning unit or anything.)

The visitor’s centre showed a good video on the history of the gold rush era and there were some restored heritage buildings set up like museum exhibits.

We were also too cheap to visit the brothel museum. It could have been cool, but we had already wasted our money on some pretty average popcorn by that stage. So maybe someone else who has been can let us know if we missed out.

A few miles out of Skagway is the site of the former port of Dyea. There isn’t much there now, just a recreation area, some trees, a few building remnants and the ‘slide cemetery’ that marks the eternal resting place of those unfortunate souls caught in the 1898 avalanche. (Plus a few others) 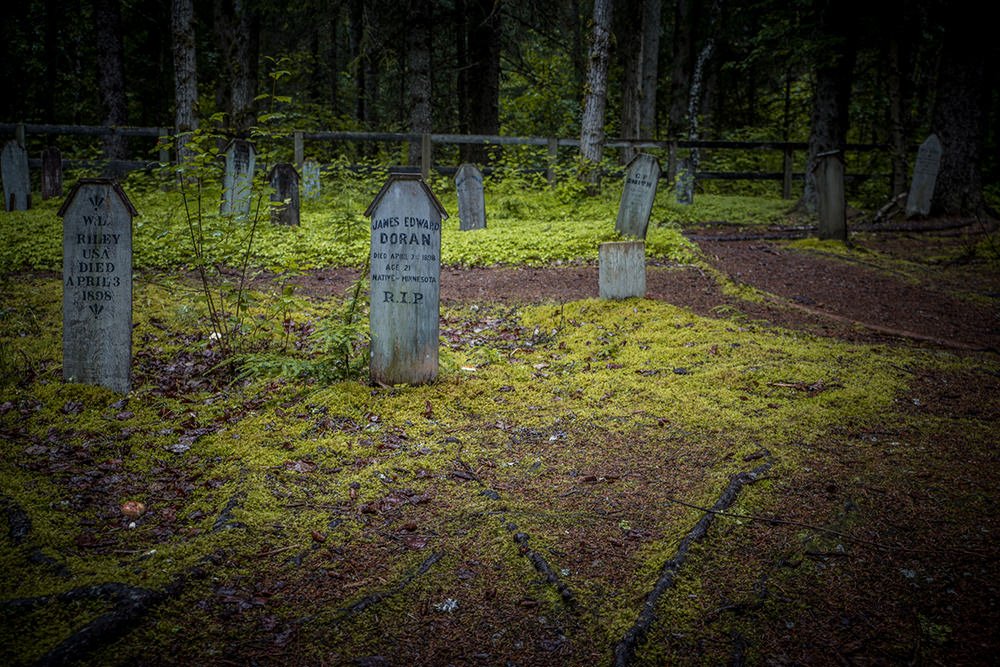 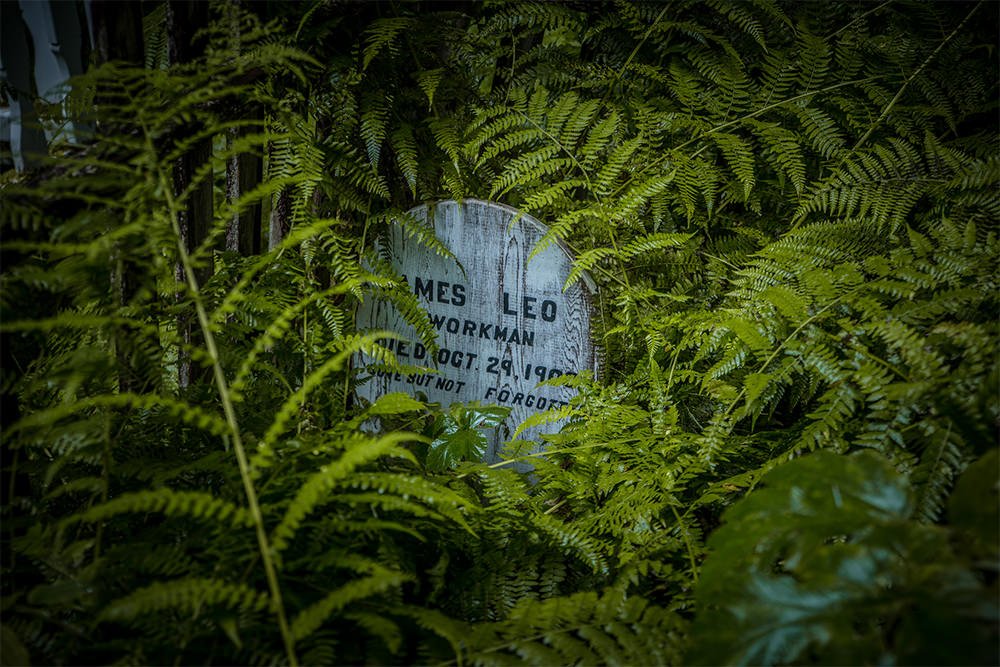 Instead of trudging out the hard way over the Chilkoot pass trail—as the hopeful folk seeking gold in at the end of the 1800’s had. We hopped in our warm, dry vehicle and drove the scenic White Pass back to Canada. 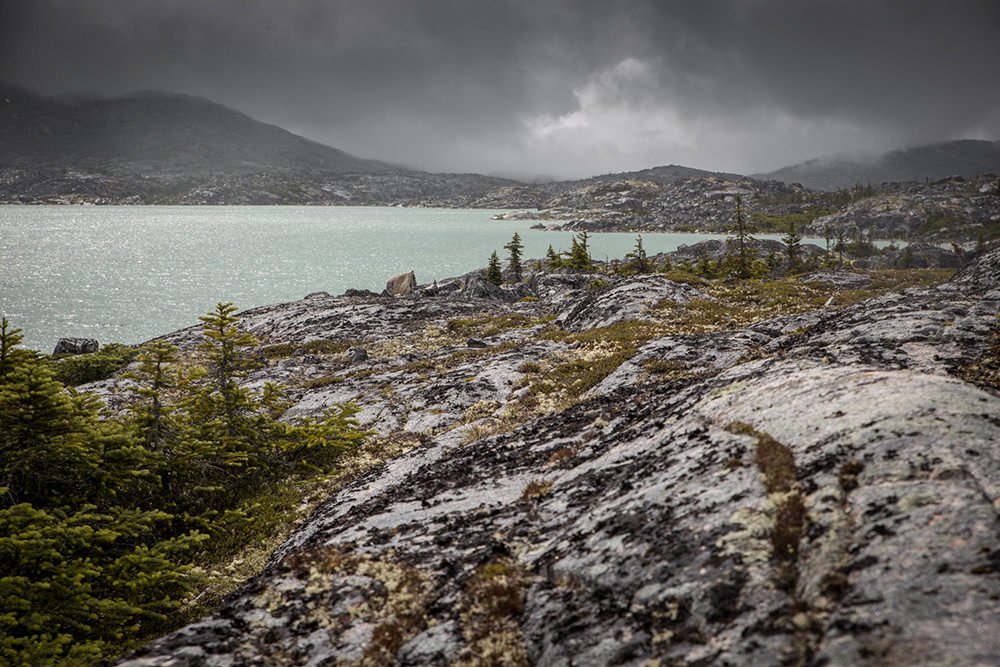 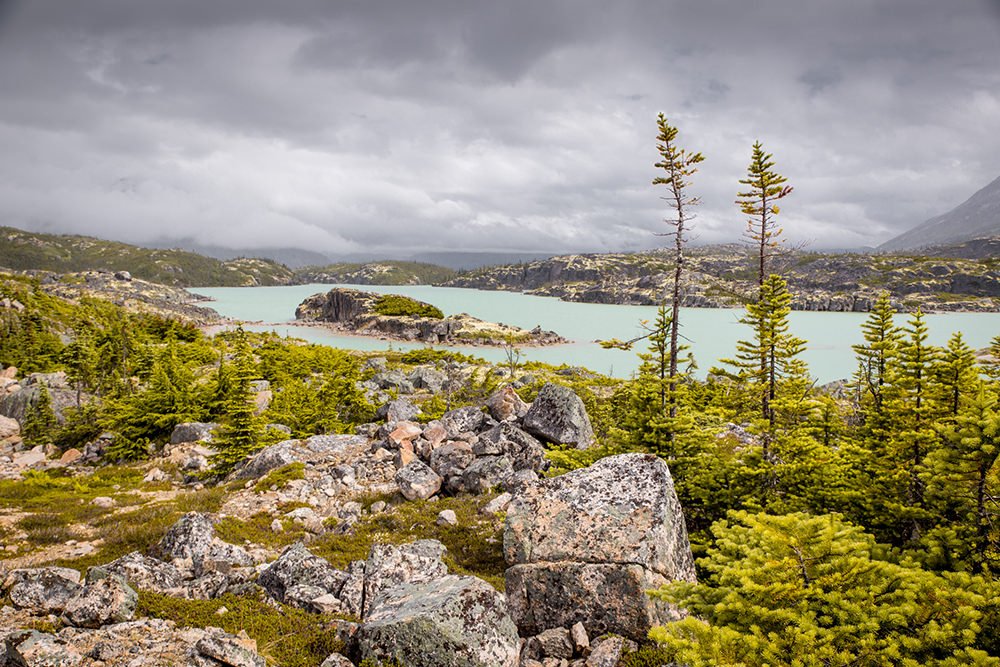 Their Bigger Hammer was one of our favourite barley wines we have had the pleasure of sampling. Sadly we didn’t leave with any of their delicous beer as the Haines Brewing Co. were believers in the stingy ‘don’t fill any growler that isn’t ours’ rule. Lame.

Beers sampled—Skagway: Unfortunately, even though they make their own beer on site, Skagway Brewing were sold out of most of their brews so we only had the opportunity to sample:

Chilkoot lake campground: Honestly, how could you say no to staying somewhere like that. Even though the neighbours are nearby it feels like you are secluded in your own little pice of wilderness. It is just a short walk down the road to the river where bears are known to fish for salmon. Or if you want to, you can fish for salmon. Either way, it’s convenient.

The Rusty Compass Coffeehouse: I’m not sure what they called their slice they sold. Try to imagine pure happiness condensed into bar form and you’ll be close. Go in and try their food, they seem to know what they are doing!

The American Bald Eagle Foundation: A great place to go to learn about bald eagles and meet Dylan, the world’s cutest owl.

« Onboard Shower
Canadian retail hospitality—it reminds us of home »