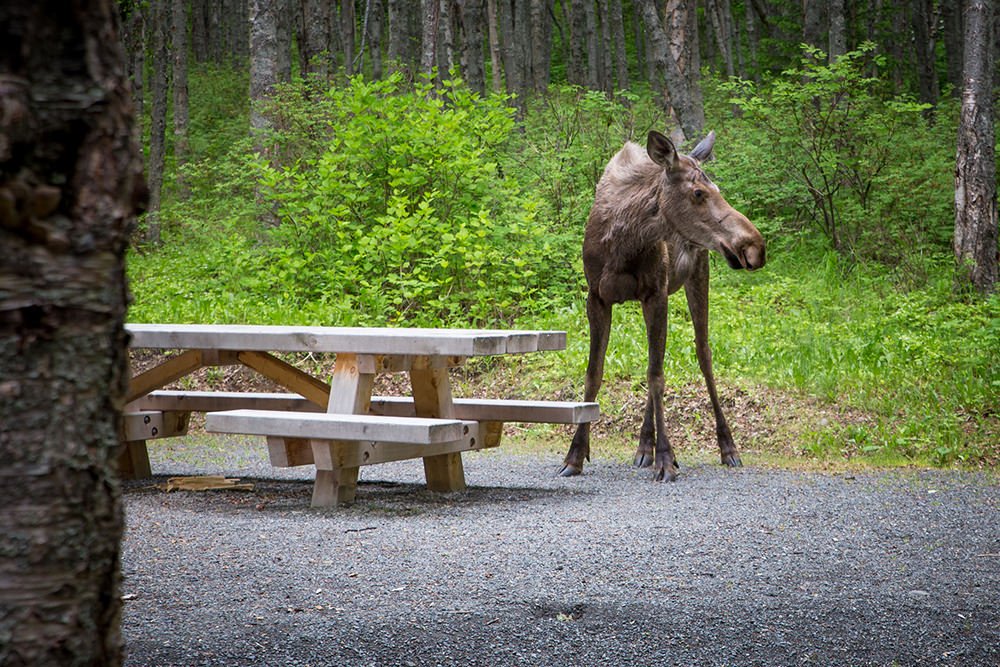 We can’t by any means claim to be experts on small town Alaska, we’ve only visited a few. But the ones we have visited have all been pretty unique and fun. Three of our favourites in the Alaska so far have been Hope, Whittier and Kennecott. Kennecott will be the subject of its very own blog post due to the large quantity of accompanying photographs that it will involve. But for now, allow us to familiarise you with the two very different towns of Hope and Whittier.

Hope is a former gold mining boom town. Now a small picturesque settlement which includes a number of old log cabins, it is a quiet getaway not that far from Anchorage.

This was a place we just drove to ‘because it was on the map’. When we arrived, we were pleasantly surprised by what we found. We wandered around the museum, which included several cabins full of informational displays and audio recordings, pretty flash for a tiny town really. The lady at the museum was very helpful and chatted to us about the colourful history of the area.

Interior of house in Hope Museum

Interior of workshop in Hope Museum

School room at Hope Museum, each of these rooms had recorded audio to tell the stories of people that had lived in Hope. It was a pretty cool museum really.

There were originally two mining towns in the immediate area, Hope and Sunshine. Sunshine wasn’t in the best location, so disappeared into the pages of history. Hope, situated in a sheltered valley with river access managed to outlast its poorly planned companion town and take on a new life after the mining boom faded.

We stayed just down the road from the town itself in the Porcupine campground. Pretty expensive for a state campground, but justifiably so, with spacious camping spots—many with a picnic table situated for great views across Turnagain Arm. This is the kind of place we wish we could stay every night.

The beer and the view.

Not sure about the water though. 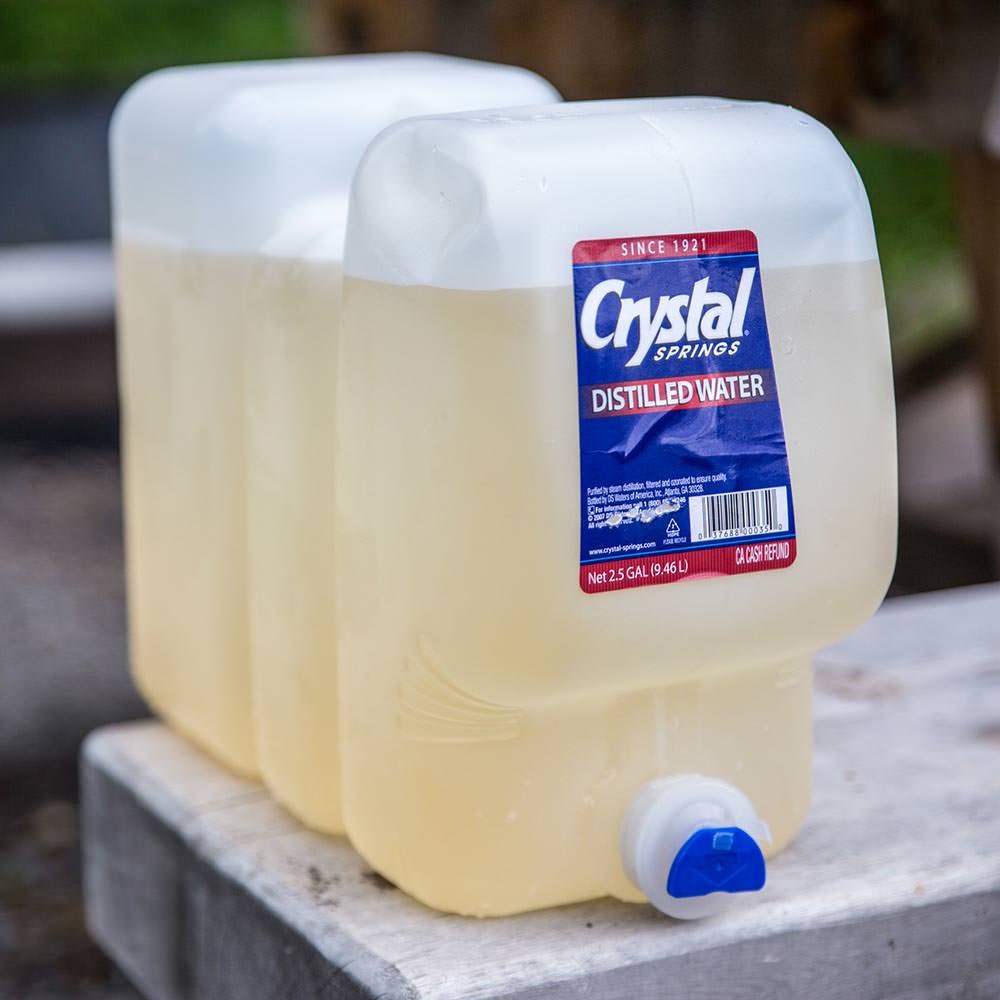 For the second time in as many days we managed to embark on a walk of several miles without any thought of  being eaten by bears. Therefore the bear spray was still in the car, quite a long way from us. We however, were in the middle of the bear riddled forest. (Actually the locals said they hadn’t seen many in the area this year).

This keeps happening because we are just used to the idea that any walk that is less than 10km on a reasonably well-kept track is not something that involves any real planning. As a result, we tend to simply wander off with what we have on hand. It will be a couple of kilometres later when we will remember bears and wonder if maybe, just maybe, we should have been more prepared.

In our defense, the track leading from right next to our camping spot did look very inviting. Also, no bears were encountered. 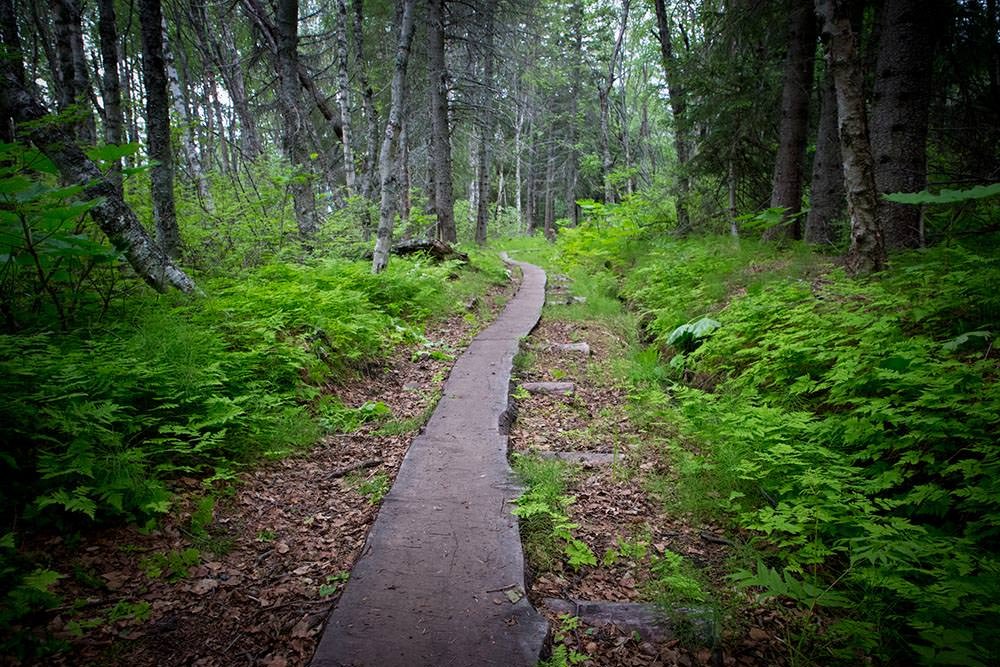 However, we felt it was important to try to encounter some beers, so we dropped into the town bar to catch the night’s live entertainment. A few of the locals were having a blast singing along to the music and getting up on stage. Most people seemed to be from some kind of adventure tour and were just dropping in between doing adventurous things. Not feeling particularly adventurous, we were happy to just sample some more Alaskan beer (separate beer-related blog post to follow at a later date) and called it a night.

The next morning it was time to earn some money to fund the trip. After spending $4.99 on a gold pan, it was time to make the investment pay for itself.

We naturally assumed the riches would flow instantly, expecting to upturn gold nuggets the size of golf balls with minimal effort on our part. 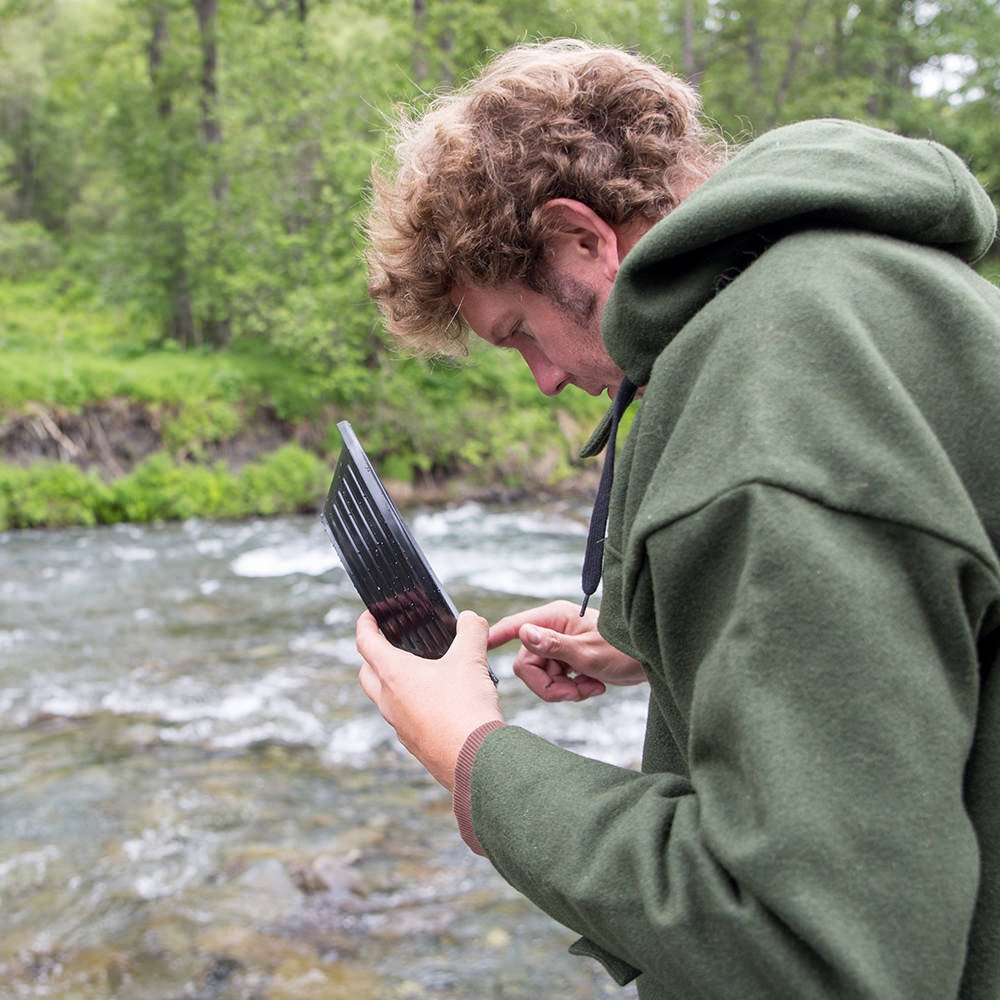 While we had a fun morning by the river attempting to find gold, we unfortunately have to report that the sum total of our findings came to exactly 0 grams of gold. So we are still down $4.99 and will have to stick with our original means of funding our travels. 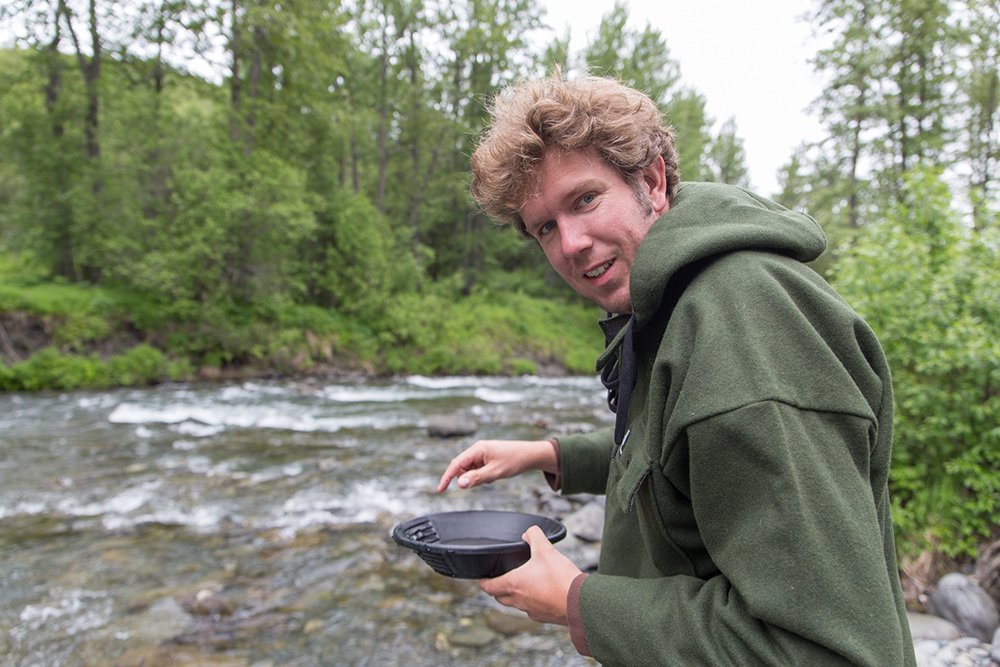 Our hopes of striking riches in the aptly named Hope dashed, we made for Whittier.

The town of Whittier has what is possibly even a more interesting history than the gold-mining background of Hope.

It was originally established as a military base, mostly because of its consistently terrible weather (and therefore nearly year round cloud cover), but also due to being a very northerly ice-free port with a deep water harbour for submarines.

The military built one large building there to house the troops. The self-contained city was at one time the largest building in Alaska. It included a bowling alley, cinema, jail, a hospital and all the comforts of home. They also built some covert tunnels to allow people to move about undectected. This building (the Buckner building) sustained structural damage in the 1964 Good Friday earthquake (a rather large 9.2 that left its mark on much of Southcentral Alaska). The building was a write-off, but the large amounts of asbestos and the difficulty of removing the rubble from such an out of the way area, meant that the building has sat empty ever since.

A magnet for urban explorers—now under ownership of the city, they have it pretty carefully fenced off and even asking nicely won’t get you in the door to explore. (In all honesty it doesn’t look particularly pleasant inside) So we had to make do with a few photos from the outside.

Just getting to Whittier is a bit novel and interesting. Only recently have they enlarged the train tunnel to allow a single lane road for vehicle access. They alternately open the tunnel for incoming and outgoing traffic every half hour. Upon paying your toll, you get to line up in a ‘staging area’ in a lane that depends on your class of vehicle as you await the green light to drive through the tunnel. 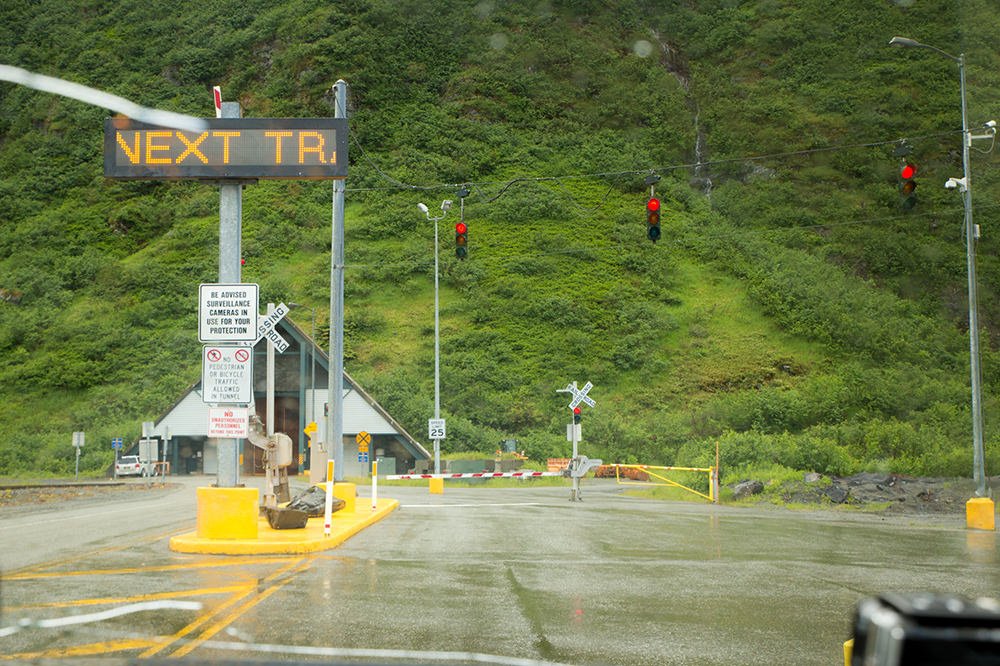 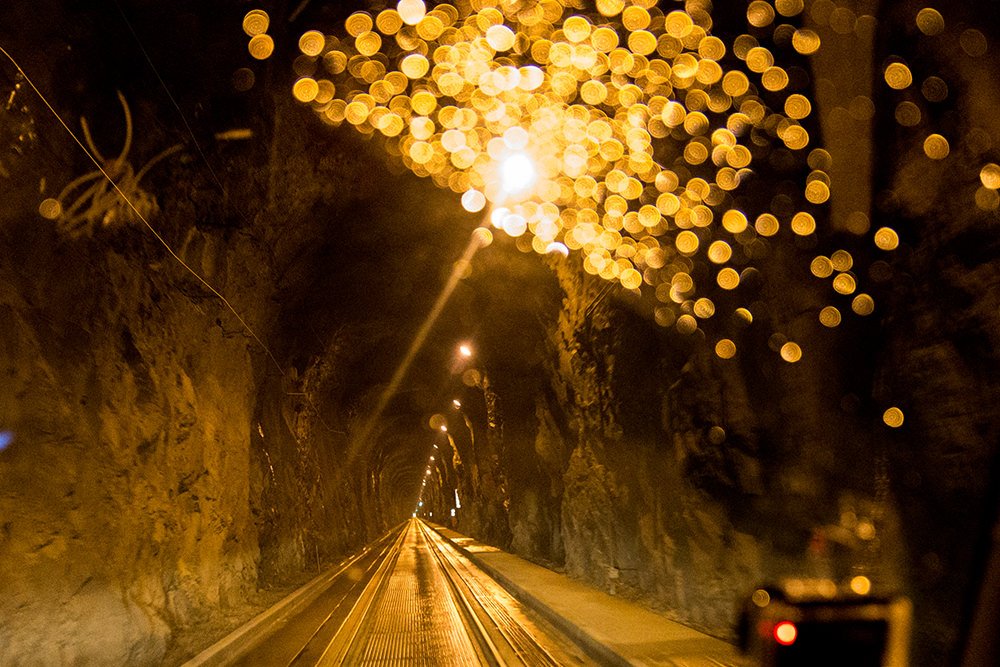 Inside the Whittier tunnel

Within the town itself now, just to keep with the single purpose building theme, nearly all of the town’s residents live in the one building. This isn’t an exaggeration, they really do. This is it here, the Begich towers, the one single, large apartment block in the town of Whittier. Apparently one of the underground tunnels is still functional and serves as a way for students to travel from the Begich tower to the school during the worst of the winter snows. 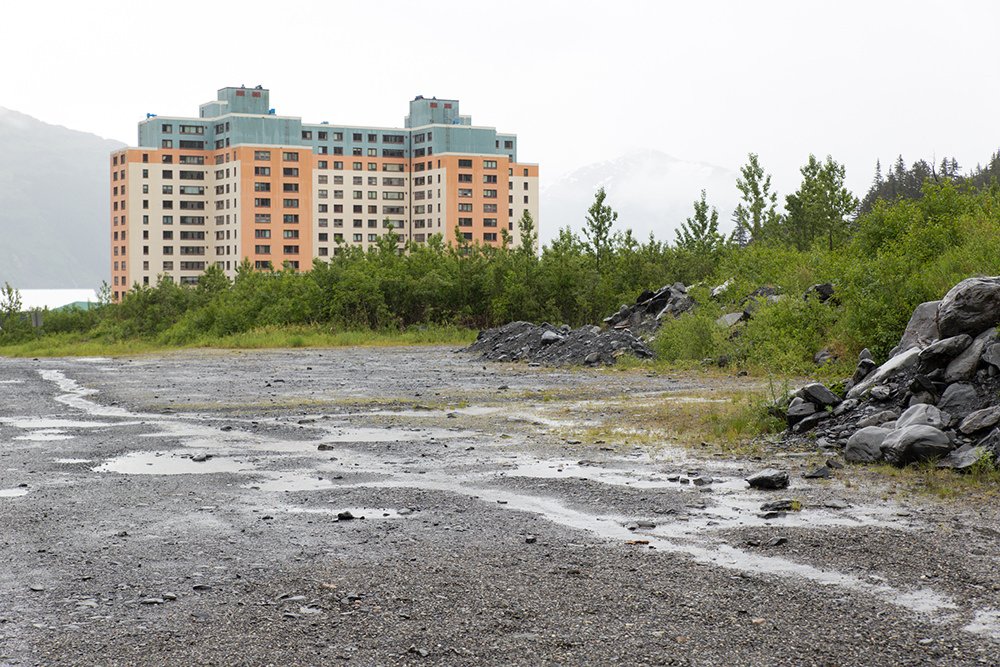 Begich towers, where it all happens in Whittier

Other than the novelty value of the buildings in Whittier, the town itself is taking on a bit of a life as a tourist destination. We felt the area reminded us quite a bit of Milford Sound in New Zealand, a similar wet, mountainous forest-clad area, with waterfalls everywhere you look.

We had already spent our money on a boat cruise in the Kenai Fjords, so didn’t go on another one. But Whittier is meant to be a fantastic spot to leave for boat cruises and kayaking trips to see the wildlife and glaciers of Prince William Sound. It is also rumoured to be a great spot for scuba diving. But my rules are “If it isn’t tropical, I’m not diving it” mostly because I find cold water terribly upsetting. So we didn’t get to test this rumour.

There were several interesting sounding walks in the area, the lady at the café (with whom we had chatted over a clam chowder and learnt much of the history of the town) sent us down the end of a road to a pretty impressive waterfall. 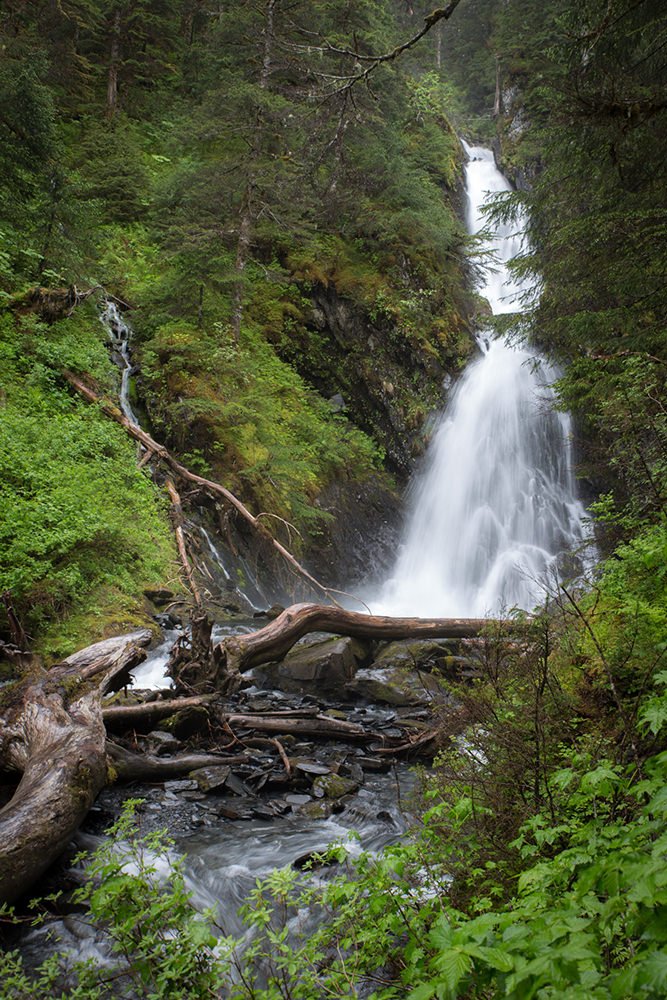 We also wandered up the top of the Portage Pass where we got a good look at some more glaciers, but mostly just enjoyed our opportunity to stretch our legs and soak up the scenery, despite the relentless rain. 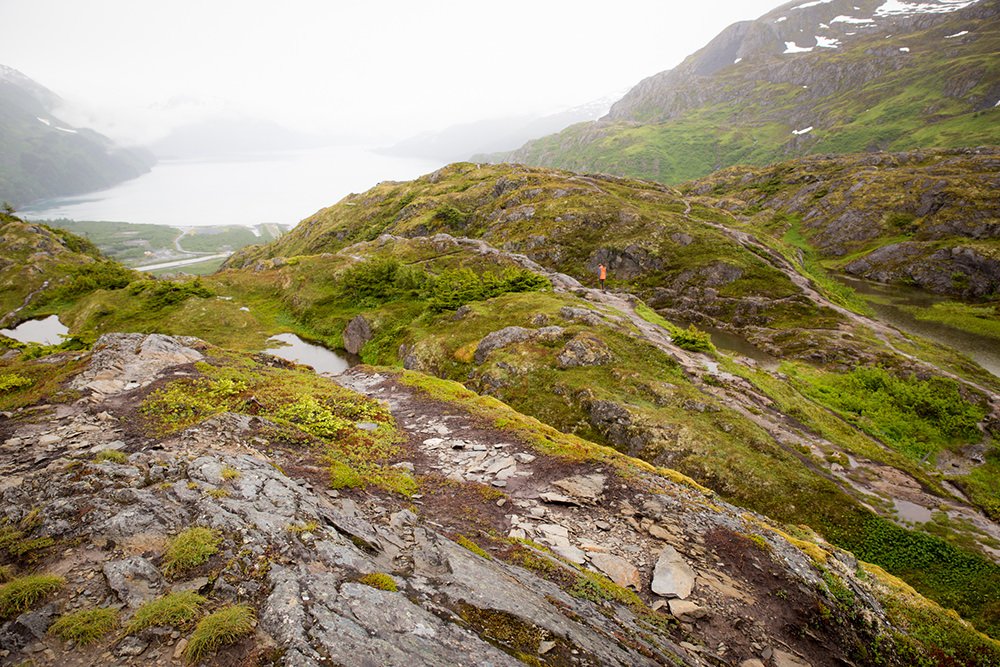 Portage Pass—The orange dot is Ben impatiently waiting for Emma to stop wandering around to find the best spot for a photo. Standing in the rain waiting for Emma is surprisingly not one of his favourite hobbies. 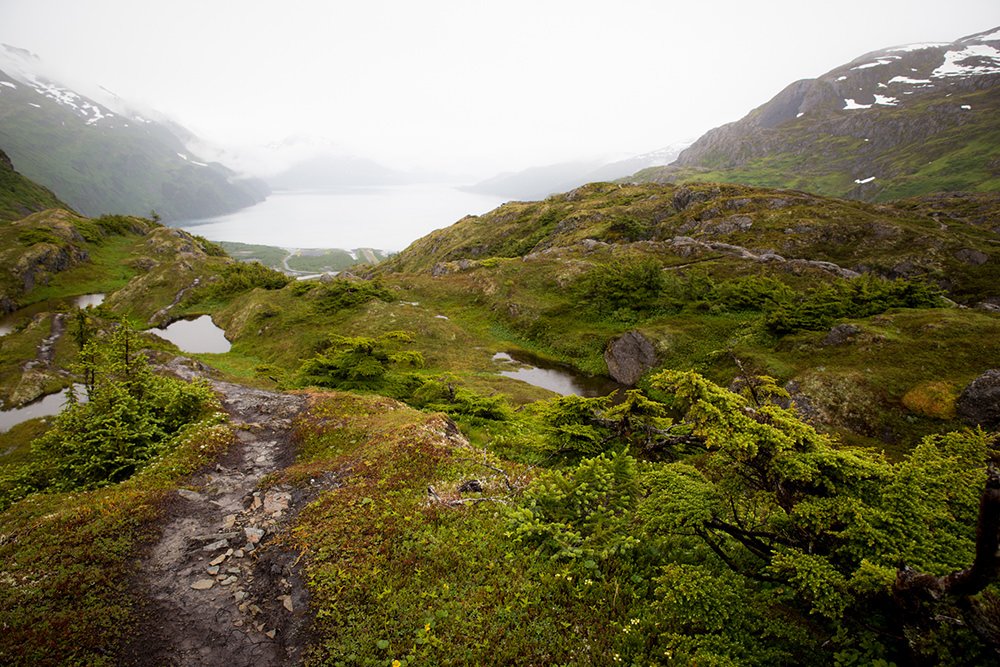 Portage Pass—There are some glaciers dotted around in the mist in the background there.

By the time we had finished exploring Whittier, it was time to head back to the big city of Anchorage to collect our roof top tent.

Number of times we were eaten by bears, despite poor planning: 0

Porcupine campground If you plan on staying here over a weekend we would recommend making a booking, we noticed all the campsites with ocean views were booked out for the weekend in advance.

The Museum in Hope is a great place to get your learning on, it gives you a good feel for what Hope was like during the gold rush.

Portage Pass trail is a short uphill wander that offers great alpine views at the summit. It isn’t particularly steep or long and the views at the top are stunning. There is actually a clear view of the Portage Glacier from the top, assuming a reasonable gap in the clouds.

Gold Panning—fun, but not the best road to financial independence.