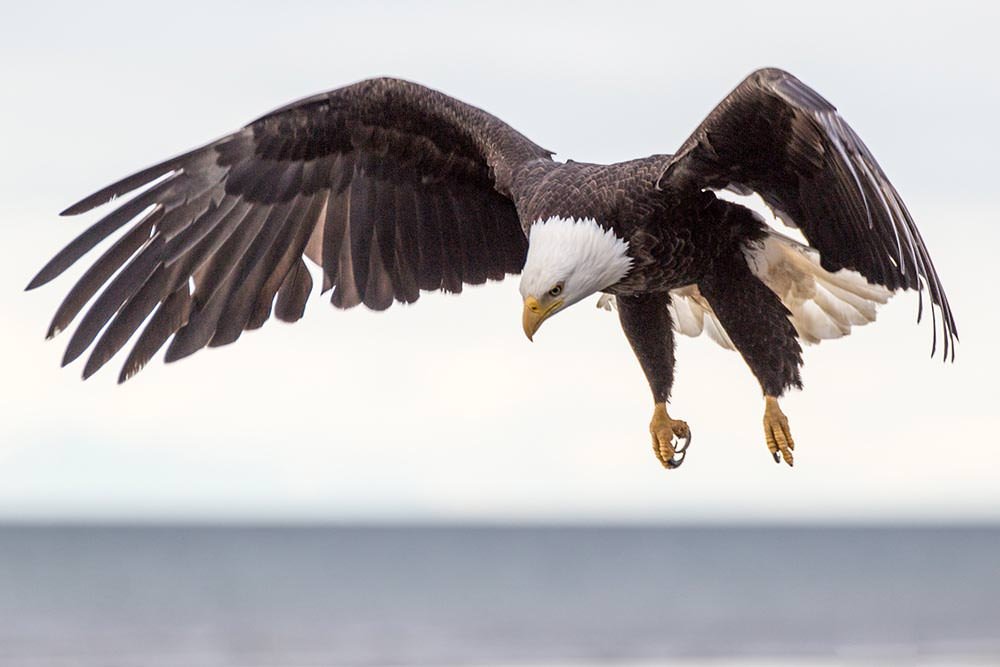 The town of Homer describes itself as the ‘quaint little drinking village with a fishing problem’. Or at least that is what the bumper stickers at the brewery said.

There is indeed a lot of fishing going on in the area. Everywhere you look someone is offering Halibut Charters. But we weren’t there to fish. 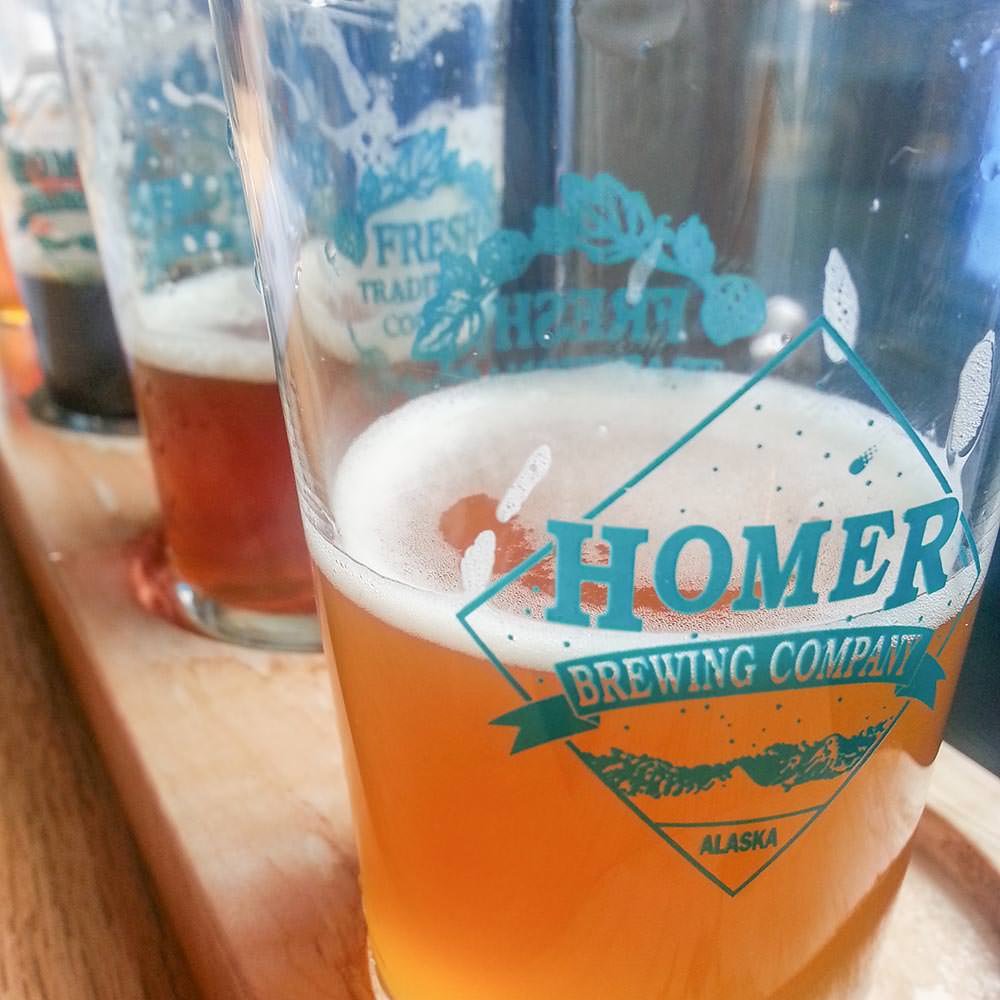 In all honesty, we weren’t really sure why we where there.

We just ended up driving there because the chap we bought our roof top tent off mentioned that we might like it there. In our books, that is as good a reason as any.

There were plenty of interesting galleries, museums and tempting art shops to keep us entertained without needing to go on one of the plentiful halibut charters.

Emma found true happiness in the form of an icing drenched sticky bun that was 80% sugar 20% bun. In fact, that bun alone was probably worth the drive from Anchorage, so we can just consider everything else a bonus.

Most of the action in Homer is centred around ‘the spit’ a narrow tongue of gravel that juts out 7.2 kilometres (4.5 miles) into Kachemak bay. Formed from the terminal moraine of what must have been one unbelievably huge glacier. 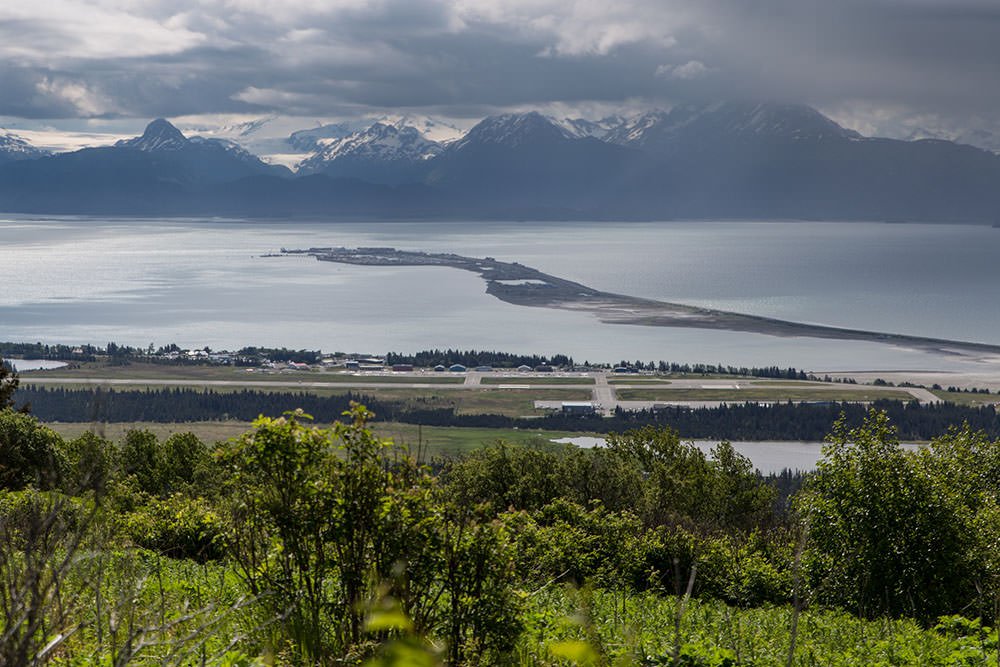 ‘The Spit’ is pretty much just that, a big gravelly spit.

All along the length of the spit, dispersed amongst the assorted Halibut Charter operations, are the abundant galleries and shops. We spent a big chunk of our first day there wandering about these looking at various things we couldn’t afford. The buildings are all brightly coloured wooden shacks, many built on stilts above the rocky spit. 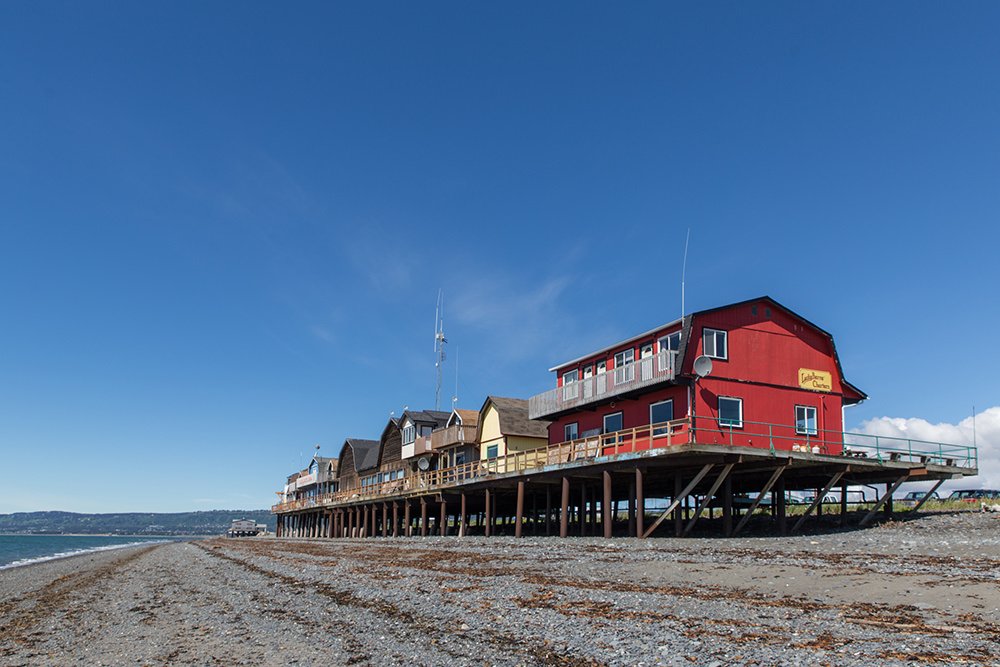 As a result of our aimless wanderings we ended up chatting to a nice lady in a pottery shop who should probably work as a travel agent. After a bit of a yarn to her, we had a list of suggestions which covered a large chunk of our trip as far as about Vancouver. One of the best suggestions so far was to visit Kennecott, but that is a blog post for another day…

The camping options along the spit appeared to mostly be windswept gravel car parks and none were especially cheap. So we opted to stay just out-of-town in the more relaxed, slightly less car park looking Anchor Point.

It turns out Anchor Point is the westernmost piece of the North American highway system, so seemed like a good spot to stop for a touristy snapshot. 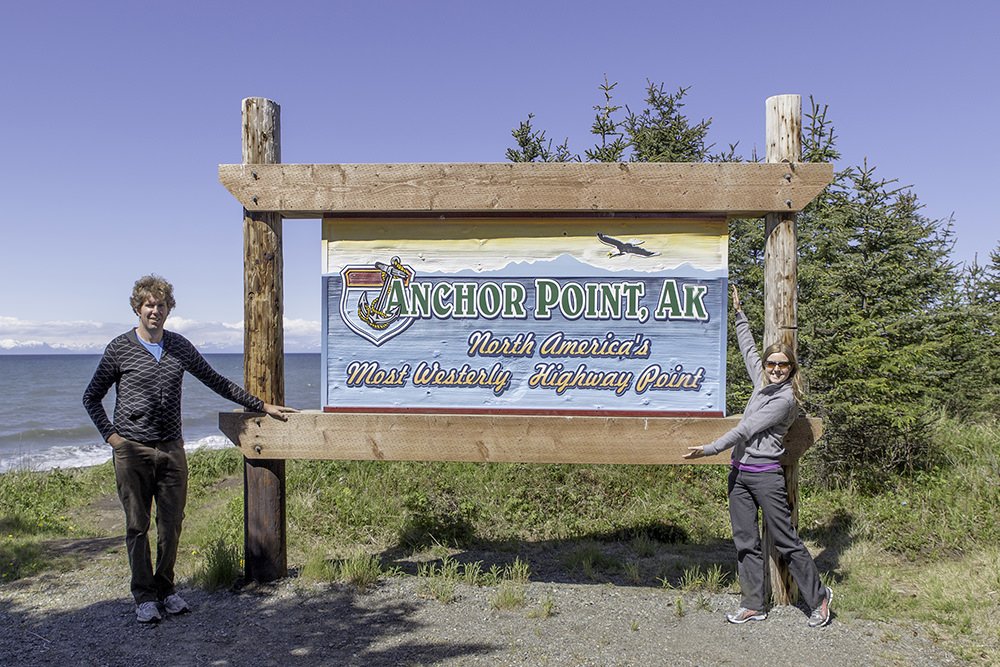 But the best thing about Anchor Point is the Bald Eagles. We’re no bird spotters, but even we managed to identify them. 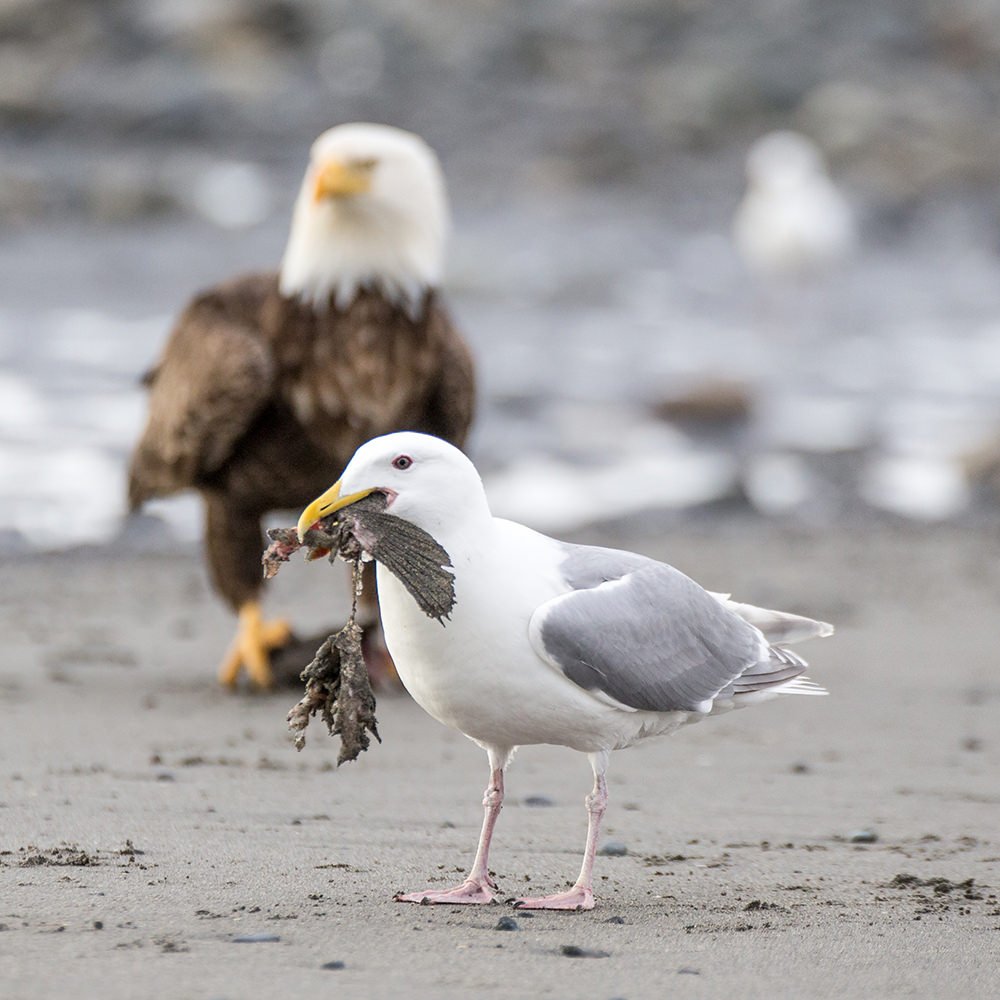 Wait, did you say Bald Eagles? Sorry about that…

Lots and lots of Bald Eagles. 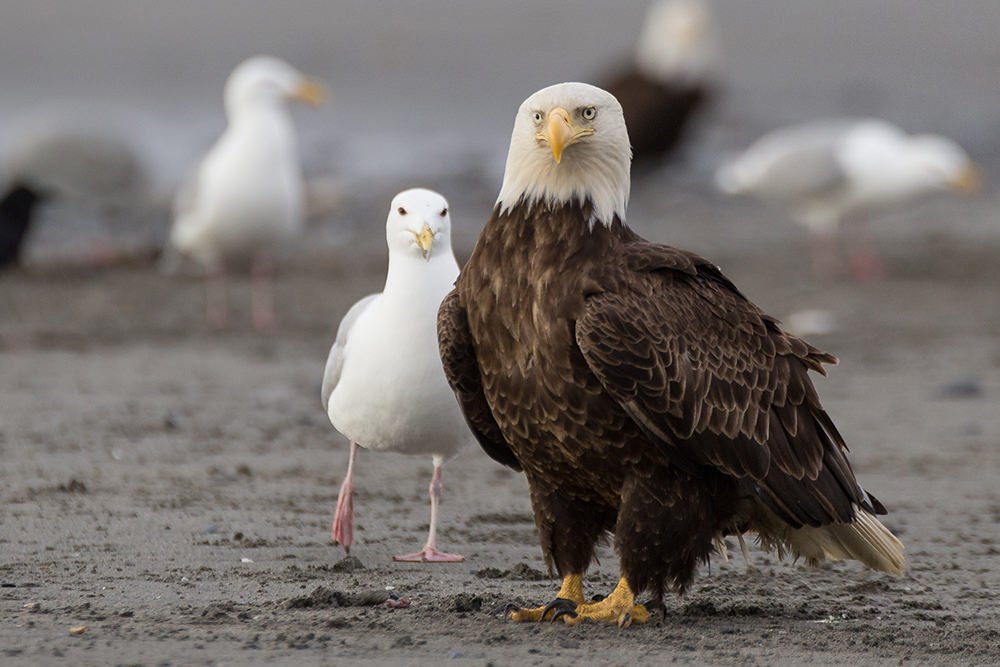 Which of course means lots and lots of Bald Eagle photos.

Before Emma filled too many memory cards with photos of eagles, we made the trip north, with a few days left before the impending arrival of our new roof top tent.

Sticky buns eaten: 1, but it was freaking awesome

Pizza: The USA knows how to make pizza. Sorry New Zealand, you have some catching up to do on that front.

Halibut campground This campground in Anchor Point is a few Miles from the hustle and bustle of Homer itself. There are also a conveniently large number of  Bald Eagles on the beach just at the edge of the campground. The cool sea breeze keeps the mosquitos at bay as well, so that is an extra bonus.

Homer Brewing Company is worth dropping in to sample a flight. If you are looking for a pint, we can both recommend the Red Knot Scottish although they brew a solid Oatmeal Stout as well.

The Pratt Museum  is a pretty fancy museum, we spent a while in here perusing all the exhibits. Although a lot of the content is very recent history, apparently many of the homesteaders who have donated articles to the exhibits are still all living in the area, so you could probably learn just as much by chatting to the right locals.

Alaska Islands and Oceans Visitor Centre is the place to go to learn more about the lengths people are going to conserve the natural resources in the area. Also, if you want to get a better grasp on how extreme the tides are in Kachemak Bay, the have a full-scale pole that shows the tide in real-time and highlights the extreme variation between the lowest and highest tides. (Although the tides in Kachemak Bay are not quite as dramatic as Turnagain arm, they are not by any means sissy namby-pamby tides)

If you arrive in Homer having not blown your budget, the walking trails over the other side of the bay sounded brilliant. But the cost of catching a boat put us off from finding out.