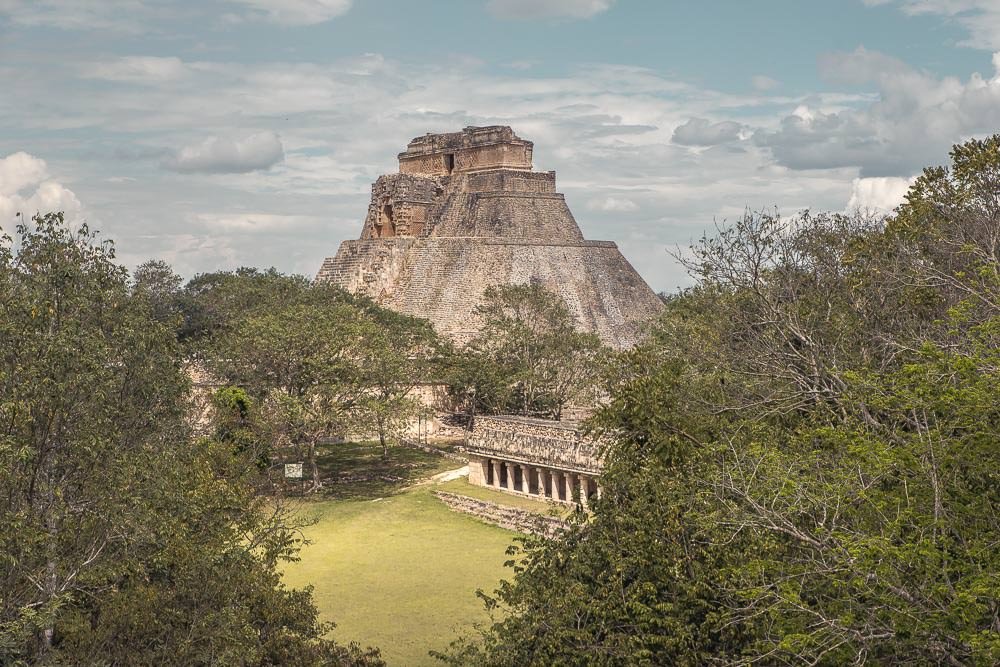 It turns out the fabled Yucatán Peninsula is mostly just a mosquito infested swamp.

All the photos you see of turquoise ocean, dramatic ruins, pristine shoreline, delightful towns—that is a small percentage of this peninsula. The rest is a flat, scrubby swampy, dusty, humid, suffocating mix of dull landscapes, never-ending straight stretches of highway and howling winds. It can also be rather expensive.

In stark contrast to the vast mountain ranges of inland Mexico which we had been exploring for the past few months, the Yucatán Peninsula is flat as a pancake. 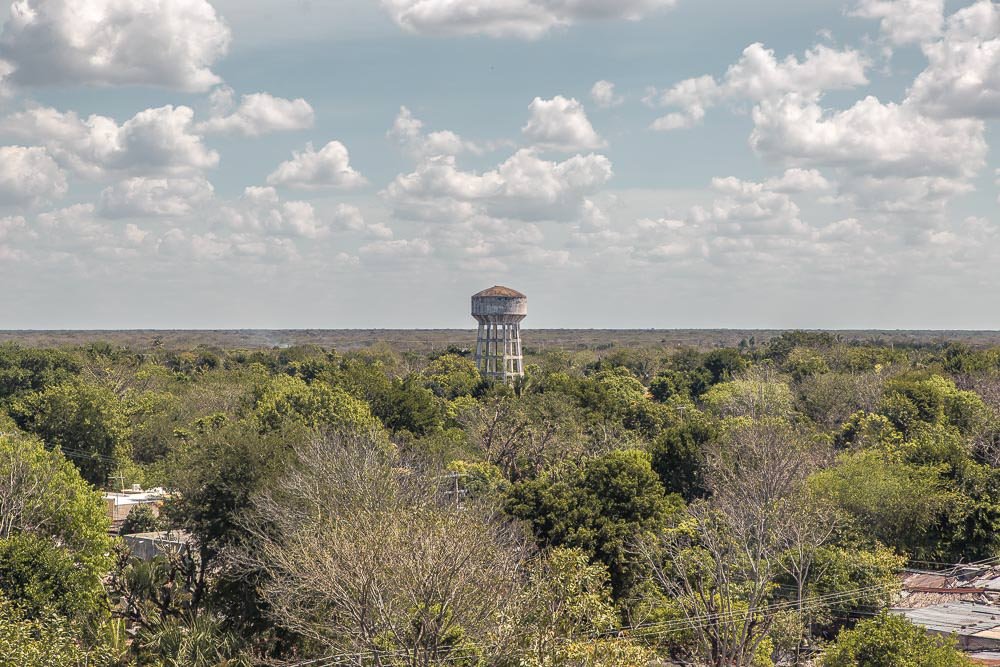 Flat as a pancake.

Another thing that changed when we left the Altiplano was that paid camping suddenly cost twice as much. Despite the increased cost it seemed that camping was less likely to include wi-fi or hot showers. Most camping options did come with the added bonus of an abundance of hungry mosquitoes.

Not to worry, perhaps we can camp for free on the beaches…

When we found a gap in the coastal mansions, we also found howling winds—whipping the sand into angry airborne projectiles and sprinkling everything we owned in a fine salty mist—not ideal for trying to get some work done on a laptop. Going for a swim to escape the heat and mosquitoes wasn’t the tranquil proposition we had imagined—stirred up, muddied ocean waves crashed onto the shore as the powerful wind blew sand into our eyes.. We had also been deterred by the scenic view of all the oil rigs along the Gulf Coast as we drove south. We hoped things improved on the Caribbean coast.

We were on a deadline, we had flights booked to Cuba from Cancun airport.

When we arranged the flight, we thought we’d given ourselves plenty of time to finish exploring the area around Mexico City, drive slowly down the Gulf Coast and muck around in the Yucatán en route to Cancun.

We were of course, completely wrong.

We hadn’t quite finished with the mountains, but they days were short and the distances were surprisingly long.

Long driving days and insufficient time to enjoy the scenery are generally not a recipe for an enjoyable road trip in our books.

Our descent from the alpine plateau to sea level was probably a spectacular drive. We couldn’t see, there was a lot of mist: 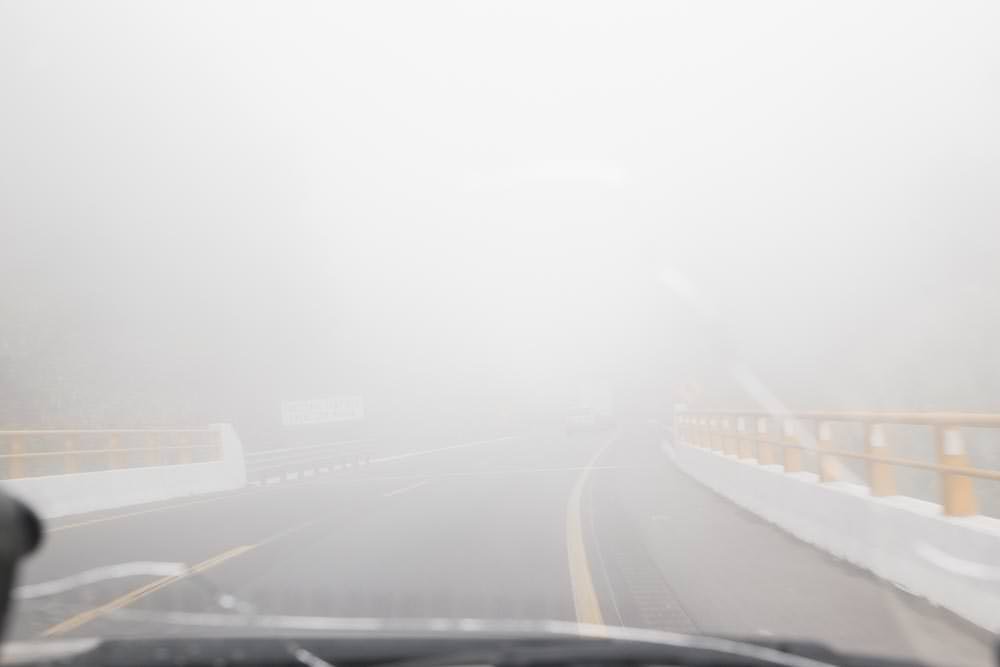 But we imagined that is what happens all the time when humid, coastal air meets the mountains. Bring on the warm weather.

No warm weather was brung.

Our drive down the Gulf Coast and into the Yucatán Peninsula was greeted with overcast skies, rain and cooler weather than we had been experiencing in Teotihuacan at 2,300m above sea level. Thankfully, still significantly warmer than the nights were at 3,400m.

Still, not quite as advertised.

To start with, despite the cooler weather it was still a pleasant change being back on the coast. The air was thicker, the nights were punctuated with the chatter of thousands of bugs. We saw our first fireflies. Everything just felt different down here, the plants were different, the landscape was different, we could sense the nearby ocean even when we couldn’t see it.

We just didn’t have time to soak it all in. We didn’t stop for any sightseeing. We would search for somewhere to camp, then move on the next day.

The landscape became less interesting as we made our way to the Yucatán Peninsula. Some of the views through the windscreen weren’t too shabby though, there were some dramatic stretches of coastal highway.

As we progressed south we were greeted with warmer weather—finally!

Also howling wind. Although, if we got out of the wind, there were mosquitoes waiting for us, so we opted to alternate between wind and mosquitos, until we were sick of both.

As we got further into the Yucatán peninsula, every second sign seemed to be for some sort of Mayan ruin. With little time before our flight we ignored these signs and just drove, wanting to be closer to Cancun before we started sightseeing. 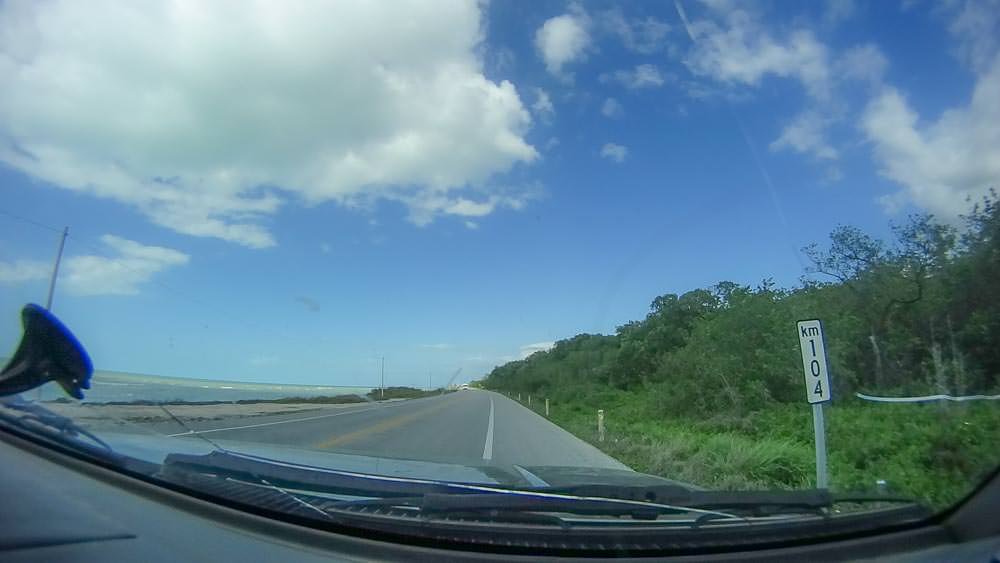 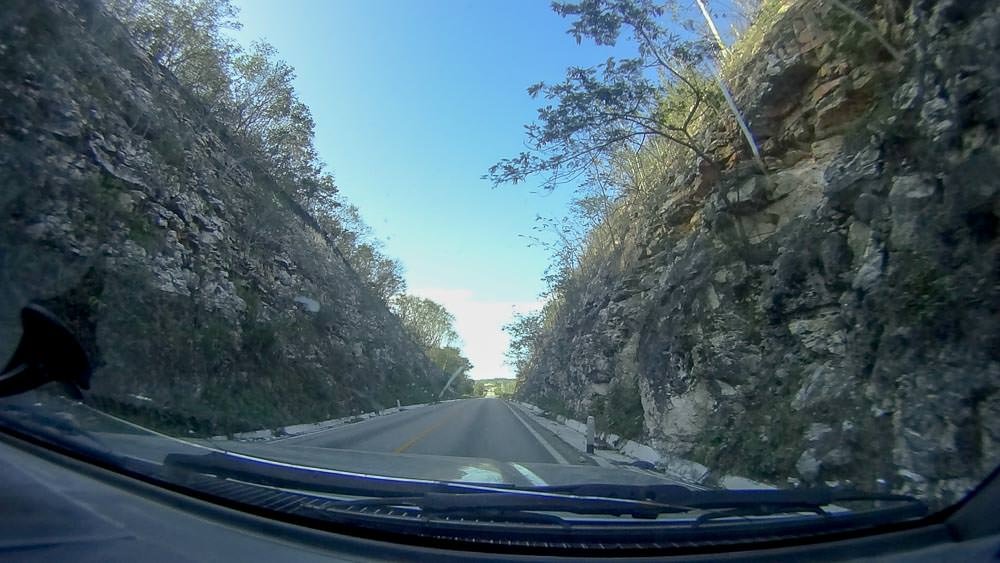 Once we left the coast, the roads were straight and uninteresting, surrounded on all sides by scrubby dense foliage with nothing to look at but more road and more foliage.

“How about this Uxmal one, shall we make a detour to see that?”

It turned out that was a good choice, reading about it after the fact, some say Uxmal is the most interesting Mayan ruin to visit in the Yucatán peninsula.

Despite arriving in the heat of the day, already sick of the warm weather (I know, no pleasing us, right?) sick of humidity, mosquitoes, rain, camping, sand, driving, swamps, no showers, everything costing more than we expected and long straight roads, we had to admit. Uxmal was amazing. Impressive. Spectacular.

Immediately worth the entry fee.

The Pyramid of the Magician, Uxmal, Yucatan.

Those stairs are probably not to code.

There were plenty of carvings preserved to see.

Although many were missing their noses.

It was fantastic to get this close to carved details in their original locations.

Standing in the middle of this huge open plaza really helps you appreciate how intimidating the ancient Mayan approach to architecture was.

Some threatening skies added to the drama.

Details wherever we look.

This guy still had his nose intact.

It is a long way up.

But somehow even looks like an even longer way down.

At what point to you just give up and call these stairs a wall?

Stairs and carvings, it is what this place seems to be all about.

So much to see throughout the complex.

The changing skies made for added drama.

That is a little stone turtle on the wall up there.

Much better than mosquito infested swampland.

There were lots of these little guys.

Can’t hug them though, they tend to scamper away pretty smartly.

The downside about visiting Uxmal was the cost to get in, to get two people through the front gate it cost pretty close to a full day’s budget.

Ok, it had been worth it. 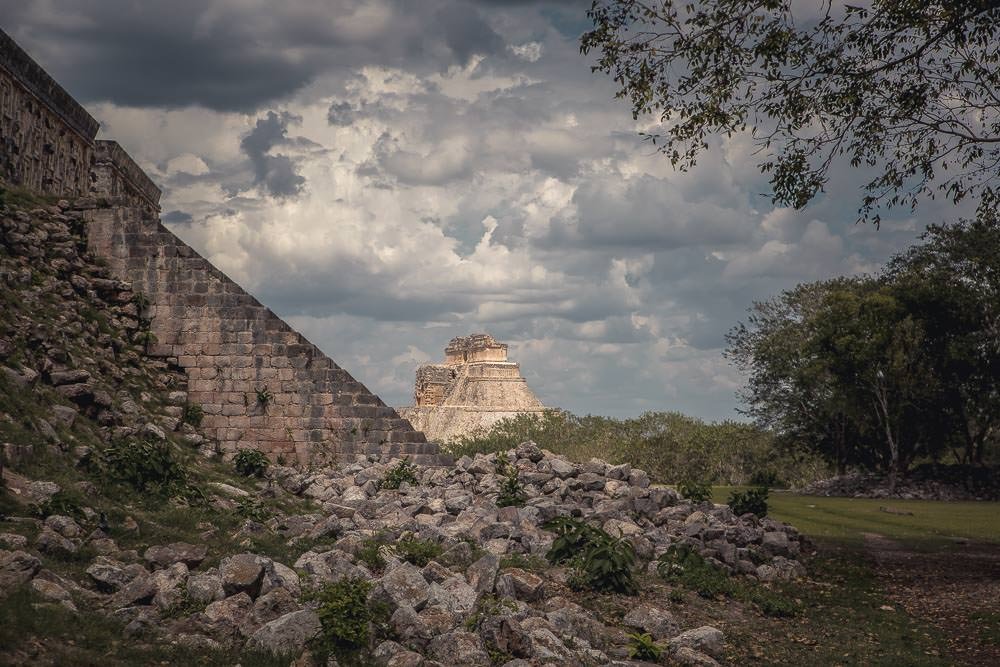 This was the other issue we were having in the Yucatán, the cost of living. Our budget was now stretched pretty thin. Instead of spending two months in Mexico, we had already spent 4 1/2 with plans to return for a few more. Also there was Cuba, by all accounts a pretty spendy destination. It was looking more and more like we were going to need a lot of extra time on the road and consequently a way to fund this.

We discussed how we could make some money as we travelled. The fact was, we weren’t making much at this stage. The bit of work we were doing was a challenge to complete when there wasn’t anywhere to escape the elements.

The hot sun warmed the tent to a few degrees above stifling shortly after dawn—besides, hunched up in a rooftop tent wasn’t an ideal spot to work.

After a day of driving, the front seats of the car were the last place we wanted to sit. Also, having a table is nice.

Our previous approach of working outside on our fold out table wasn’t really cutting the mustard in humid, salty, mosquito-filled air. Imagining our computers slowly filling with salt, water, sand and dead bugs, we carried on with this approach for a bit, but were constantly worried that we’d have to work ‘new computers’ into the budget long before the trip was done.

We were in a bit of a pickle.

Since just driving around and being miserable until our savings account was finally empty, then flying home defeated, didn’t sound like an ideal way to spend the next six–ten months on the road. We made the call to splash out on a hotel in Mérida. Mérida wasn’t cheap, we checked out a few hotels, found one that was only about one and a half day’s budget and still had secure parking. We holed up for a couple of days. 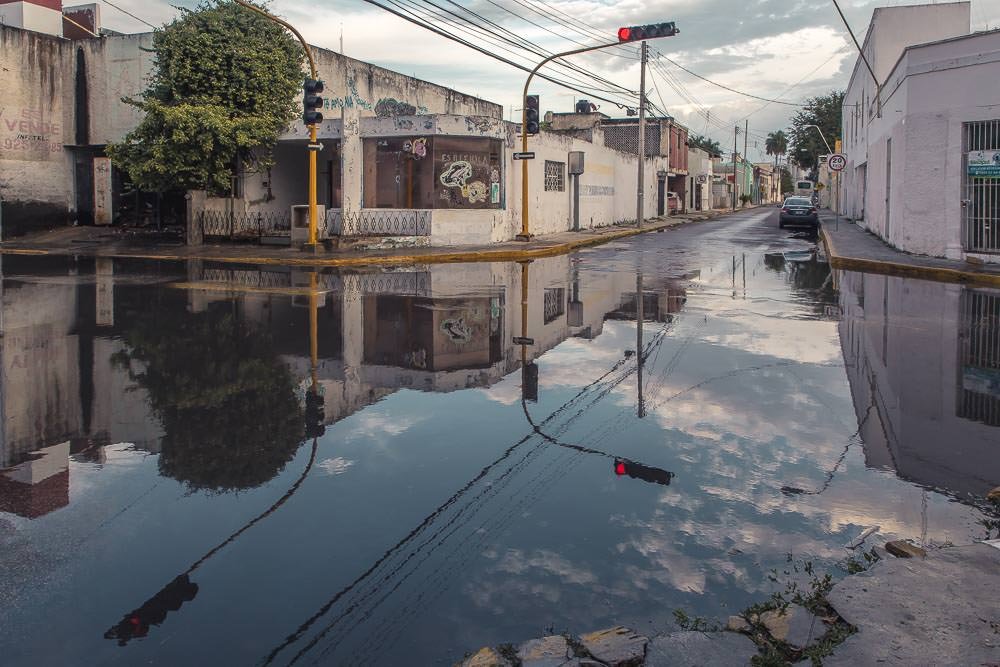 And good thing too, it meant we missed some of the serious rain storms that were sweeping through.

Air-con. Showers. Mosquito-free. Unlimited electrical supply. We finally made some progress on one of our projects—a portfolio to show off our work and hopefully pick up some design jobs: Roofdog Media

We still weren’t exactly making any more money on the road, but we felt like we had at least put some effort in. 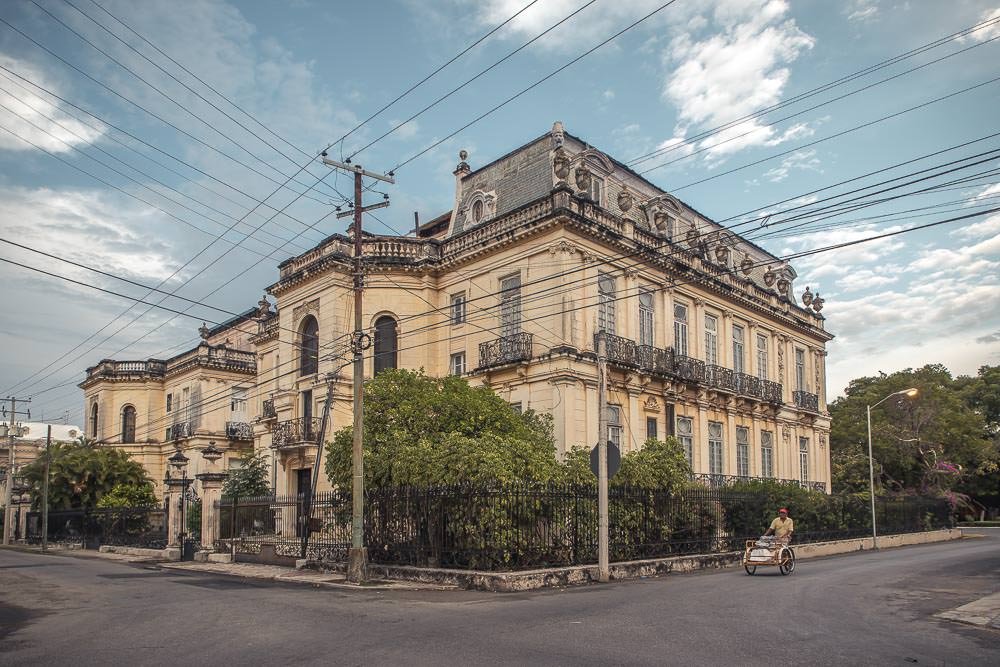 What we didn’t do was go sightseeing around Mérida, it looked like a pretty town, but we just needed a break from it all.

From there, we decided we would just take a few days to relax before heading to Cuba. The Yucatán hadn’t been the magical place we had seen in the brochures, but we imagined that if the weather was calmer and we weren’t driving past all the interesting things, we might just enjoy it a bit more.

We had heard that there was a very pleasant campground with all the amenities in the small town of Izamal. Much like driving to Uxmal, we had no idea what we were in for. We had selected the location purely based on the fact that the campsite was supposed to be both comfortable and reasonably priced.

Much like Uxmal, we were both pleasantly amazed and surprised when we rolled into town. 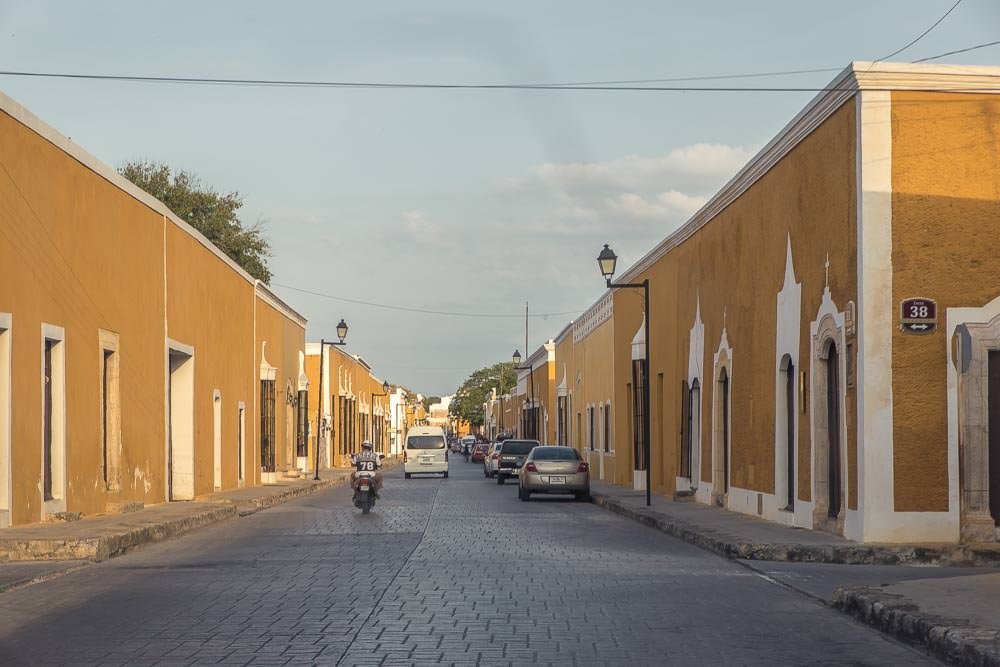 They must get a bulk deal on the paint.

Izamal, it turns out is best known for the fact that it is entirely painted yellow. 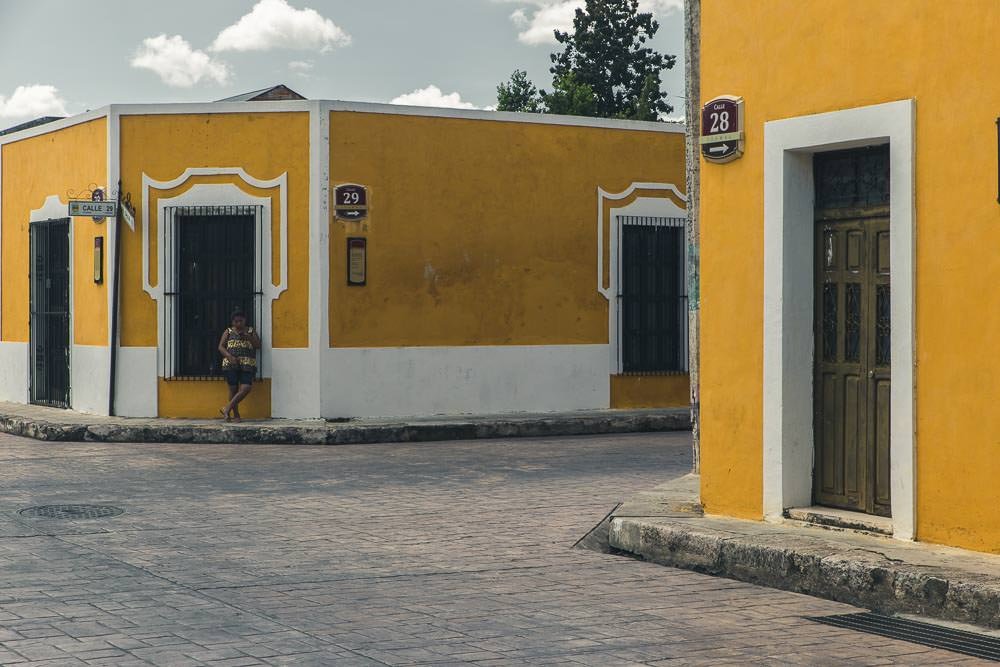 With some mayan ruins?

View from the first level of the pyramid.

Incontrovertible evidence that these pyramids were placed here by aliens, we found this tow hook placed at the top of Kinich Kakmó in Izamal.

And an historic church?

Side entrance to the historic church and convent in Izamal. Also painted Yellow.

Side entrance to the historic church and convent in Izamal. Also painted Yellow.

And we get to camp in a peaceful field on the outskirts of town? (NB: this campground came compete with a selection of several dogs. This may have been a selling point.)

Not a yellow building.

The benefit of being somewhere more tropical is the abundance of brightly coloured flowers.

The benefit of being somewhere more tropical is the abundance of brightly coloured flowers.

This could have made a great overlanding rig.

The Yucatán Peninsula. It is just a mosquito infested swamp—with a few gems.

It was time to hop on a plane and visit one of our most anticipated destinations of this trip—Cuba.

But we would be back to the Yucatán to give it a second chance after a relaxing break from our trip.

That was the plan anyway.