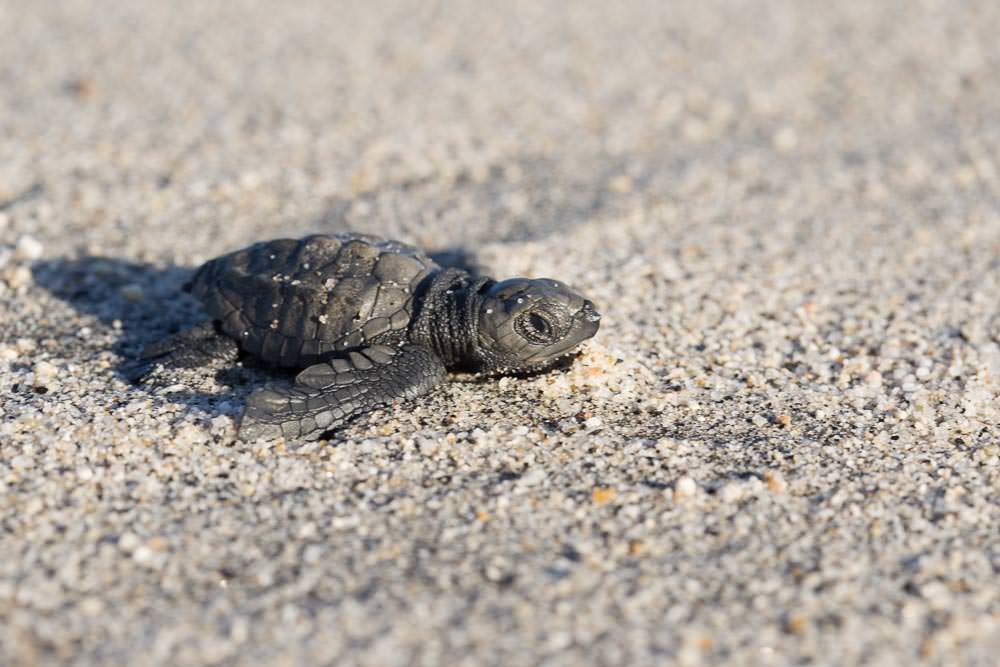 After four days camping on a beach with not quite enough water, it was time to drive somewhere with a shower.

We arrived in Ciudad Constitución ready for a nice hot shower. This didn’t eventuate, luckily they had cold water and we had a home-made hot shower packed on the roof-rack. Problem solved. We finally parted ways with four days of salt water build-up and were feeling moderately human again.

Our time in Ciudad Constitución was pretty unremarkable. We did encounter this wee bouncy four-legged bundle of energy. She had a family, so despite those sweet little laser beam eyes, taking her home with us was not an option. 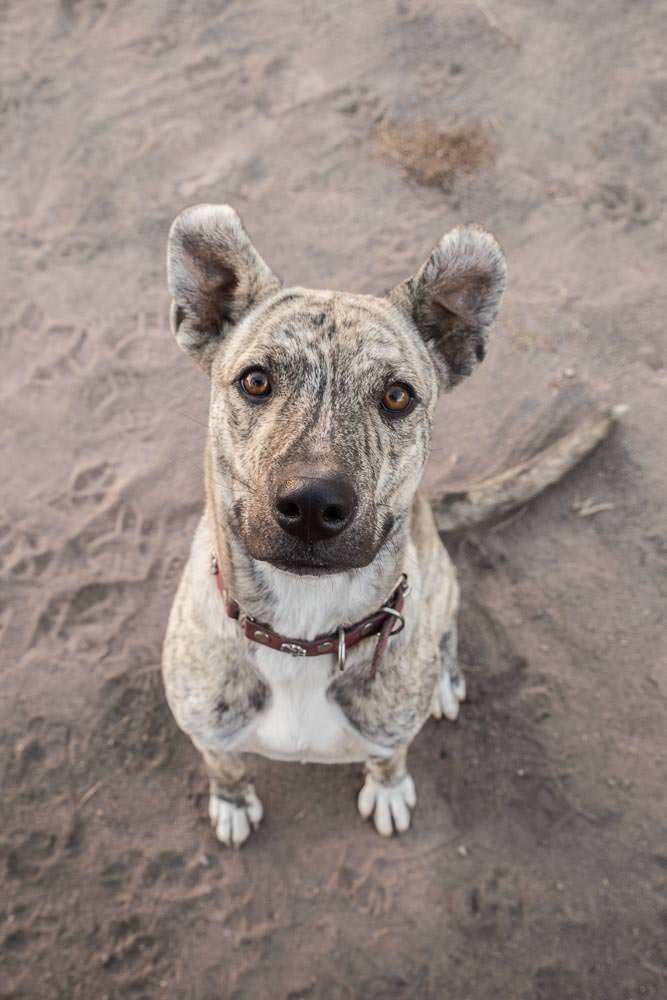 It was there that we met a nice Canadian couple who gave us a tip on a good spot for some beach camping on the Pacific Coast. 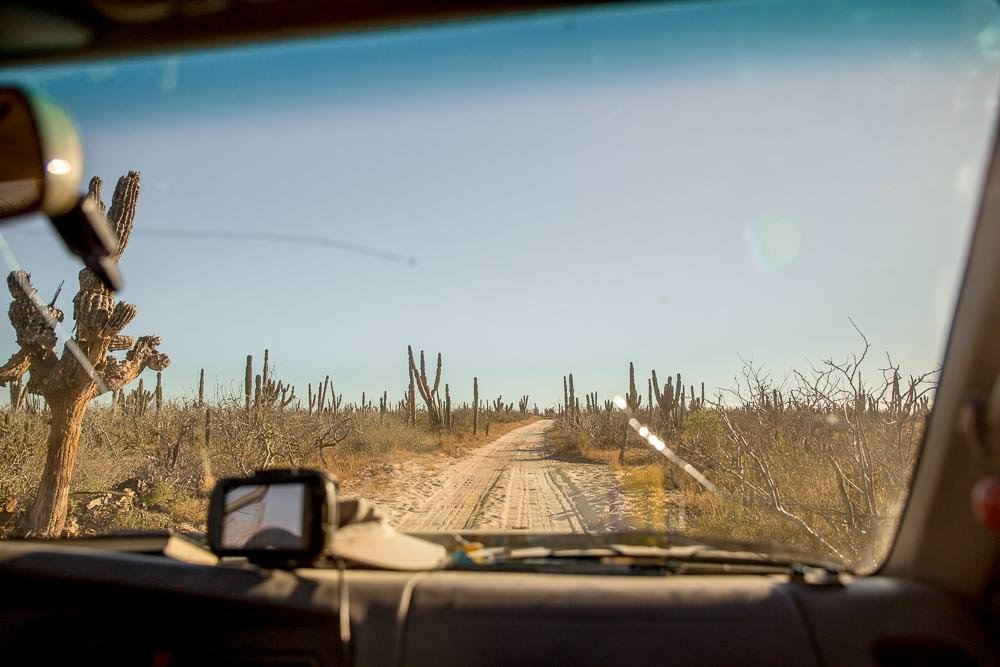 Finding it involved yet another dusty Baja back road.

We found the spot after driving past a couple of reasonably clear ‘no entry’ signs. When we arrived it reminded us a lot of the beaches at home. It could easily have been somewhere along the coast north of New Brighton in Christchurch.

But as we have mentioned before, it appears we have a bit of an unreasonable grudge against the Pacific Coast, not only did we, yet again, forget to take any photos while we were there. It also wasn’t long before we were making our way back to the Sea of Cortez side of the peninsula.

This time, we had La Paz in our sights. We wanted to pick up a couple of odds and ends at Home Depot and make arrangements for importing our vehicle and booking ferry tickets. This was necessary to allow us to travel to mainland Mexico without having to drive the long way around.

On the way into town we passed Jamie running his way to La Paz. (If you remember from our previous blog post about Loreto—Jamie is Running). Good to know that someone on foot was keeping pace with our driving. (Since then, he has zipped past us and is already a couple of countries ahead of us as we write this.)

When we arrived in the La Paz Home Depot car park, who should be parked there but Bob and Kim (1RdTrip). They were spending a few weeks in La Paz learning Spanish and soaking up city life. They informed us that despite being pretty close to Christmas, the ferry booking process was surprisingly quick and easy. This inspired us to carry on south and just make the ferry arrangements when we were good and ready to head for the mainland.

After a relaxing overnight stop at a peaceful ranch, we continued south to Los Barriles.

When we arrived we found that both George and Jenine (Traveling the Americas) and Geneva and Mike (It’s Not a Slow Car, It’s a Fast House) were also in town. When, over the next few days both Paula and John (Our Bigger Picture) and Peter and Dace (Izaicinajums) showed up, it was starting to feel a bit like being back in Loreto.

The next day, we saw another Sportsmobile arriving into town. It turned out to contain the whole family from Our Road Life: Simon, Karie, Ty and Jamie. For those of you out there who are saying “We’d love to do a trip like this, but… you know… kids…” These guys are your inspiration, check out their blog and get motivated!

Knowing that there was good company abound, that Christmas was just around the corner and that the particular camp ground we were staying at offered the magical trifecta of hot showers, wifi and flushing toilets. We settled in over Christmas.

Jenine immediately cottoned on to the fact that it was Emma’s birthday through the medium of Facebook stalking, so instead of spending a day pretending that no ageing was happening (our preferred method of celebrating birthdays). We opted for some good old-fashioned irresponsible Mexican birthday fun. But realistically any birthday spent on a sunny Mexican beach with good company, beer and food is going to be a good one!

If that wasn’t enough to make for a good day though, there was a chance encounter with a chocolate shop: 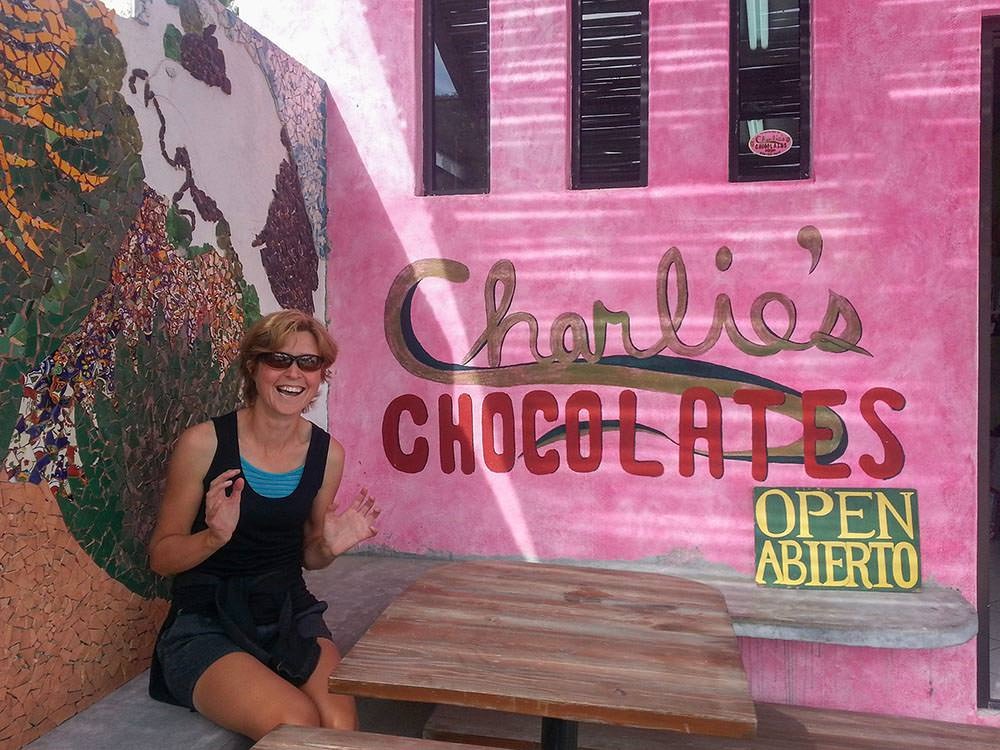 Hand made chocolates have the side effect of inane grinning that is only enhanced by the eating of said chocolates.

George and Jenine also gave us the heads up about what turned out to be one of the highlights of our time in Los Barriles—The release of adorable, freshly-brewed baby turtles.

These little guys had protected nests that were check every morning and evening by dedicated turtle volunteers. When there were enough little hatchlings, they were collected up and released into the ocean. This ensured the little fellows were safe from passing quad bikes, dogs and anything else that could squish, stomp or eat the little chaps before they made it into the ocean. Seeing these tiny wee turtles shuffle their way into the crashing waves was a pretty memorable sight. Even though we didn’t do anything more than righting a few upturned turtles and pointing them back towards the ocean, it made us feel like we were doing our good deed for the week.

A bucket full of baby turtles.

So tiny and cute.

They really are pretty small.

Turtle vs the ocean.

Just to give you an idea of what these bold little guys are up against, (even after they are carried to safety across the sand) here is a short clip of a few little turtles finally meeting the waves: 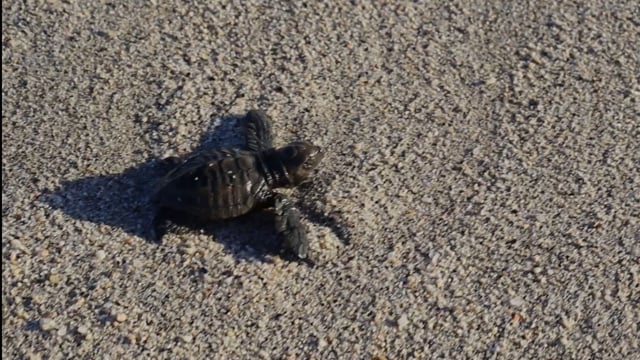 We won’t tell you about all the dangers they face once they are finally in the ocean, because that’s just depressing after seeing their cute wee faces. Let’s just say, we hope these little guys made it!

Another great thing we got to do while we were in Los Barriles was pretend that we had a dog. We miss being (ir)responsible dog owners, so it was brilliant fun to puppy sit for George and Jenine who were fostering a rescue dog for a week. 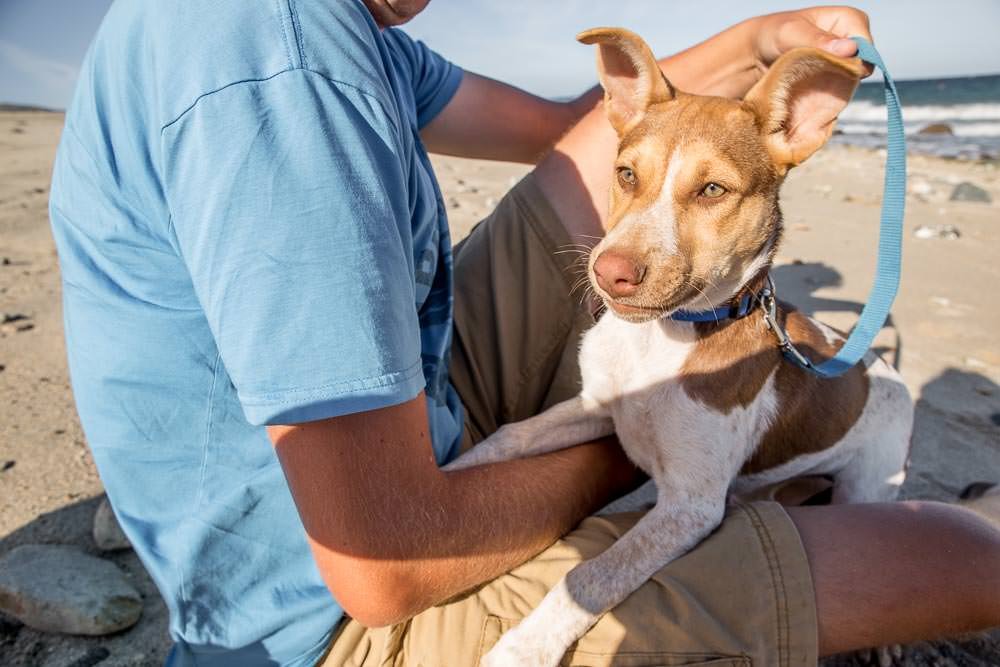 So much hard work this puppy sitting, it’s all walks on the beach and puppy cuddles. As you can tell, totally not our idea of fun…

Her name was Carly and she was awaiting a flight to Oregon to be with her forever family. Conveniently Jenine had just handled the de-fleaing process, so it wasn’t long before the little pup made her way into the tent. 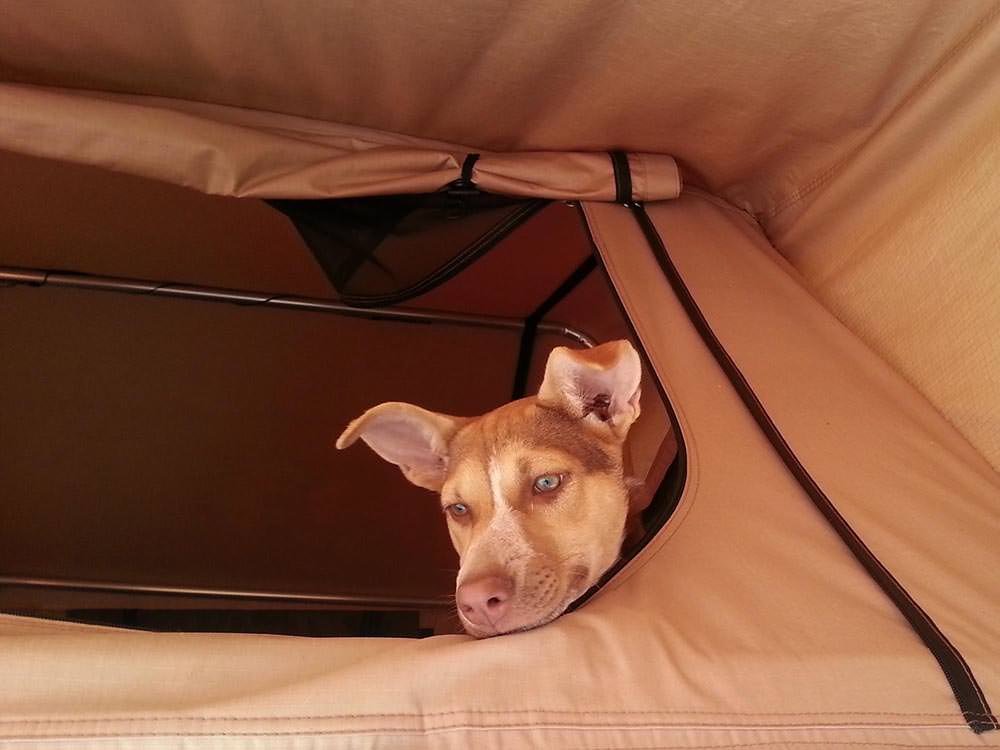 Can’t say ‘no’ to this cute little face! 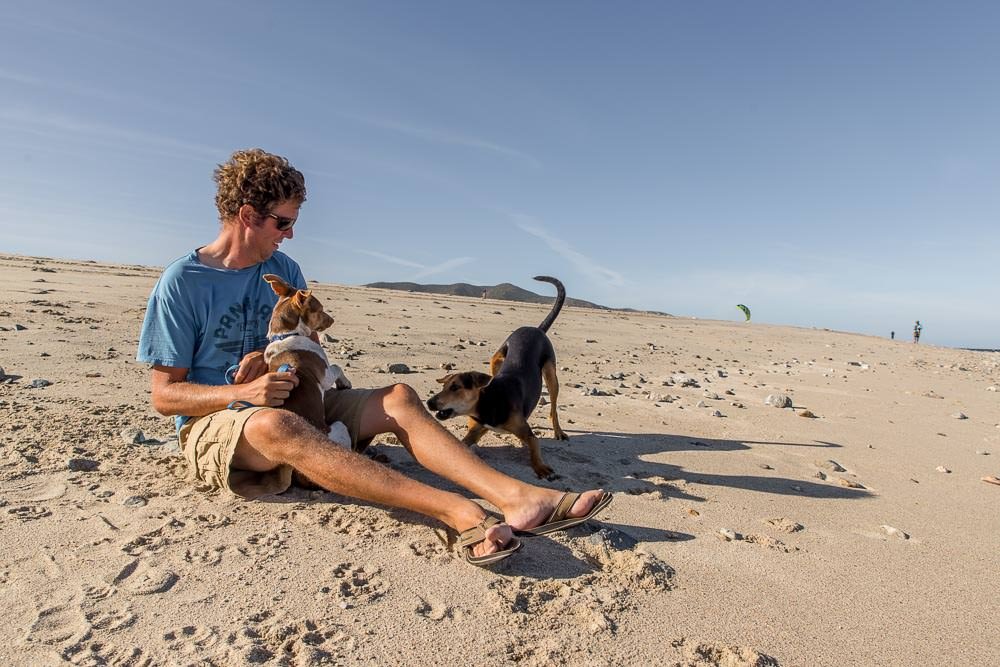 Carly wasn’t as sure about the other dog, but it gave us a chance to pretend that we had two dogs, so that was a bonus for us.

Sadly, all good things come to an end and we had to return Carly to George and Jenine (who in return had to return her to the animal shelter so that they could fly her to Oregon—protracted puppy loan agreements are complex at best…).

We hadn’t made any plans for Christmas. Beyond deciding to stay where we were due to the somewhat respectable Wi-fi in the hopes of being able to video call home on Christmas day, we hadn’t really thought ahead much.

Again, it was George and Jenine to the rescue, their friends David and Haley were visiting them for Christmas and they were renting a lush beach house just down the road. They invited us to crash their Christmas celebrations and join them for a bit of festive fun.

We immediately embarked on a mission to find some classic Kiwi festive food. However, we were foiled. Mexican grocery stores in a town with strong United States influences just didn’t seemed to be packed with the Kiwi Christmas classics. There were however, some holiday gems, like free rice with a two litre Fanta. 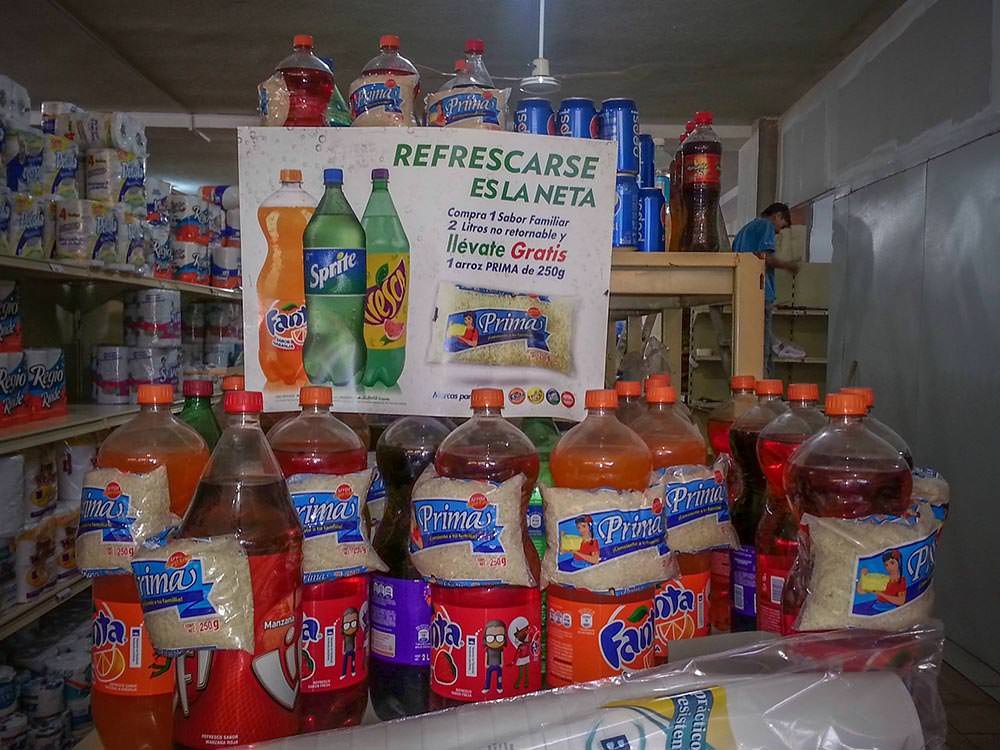 Interesting choice of products to combine there.

We struggled to find any of our usual Christmas fare. The town was sadly lacking in whitebait or pavlova. We accepted that we weren’t going to be getting a taste of home this Christmas.

Luckily the lady at the local delicatessen made a mean flan and was taking orders for Christmas day. Not a Kiwi tradition, but we think we’ll make it one, if this trip has taught us one thing, it is never turn down a good flan. (Blame Fred and Jenine for getting Emma hooked on this dessert).

After a challenging time on Christmas Eve trying to video message our families back home on their Christmas Day (which mostly ended in failure), it was great to show up for a completely non-traditional Christmas Dinner with George and Jenine and our impromptu Baja family.

Jenine is pretty talented in the kitchen (even more so when she is provided with a full-sized kitchen—despite the oven being a little old-fashioned.) As a result, we were treated to a delicious Christmas meal, with great company and were really grateful they had invited us to join them. (We stuck to providing salads and desserts, as cooking is not our strong point!) 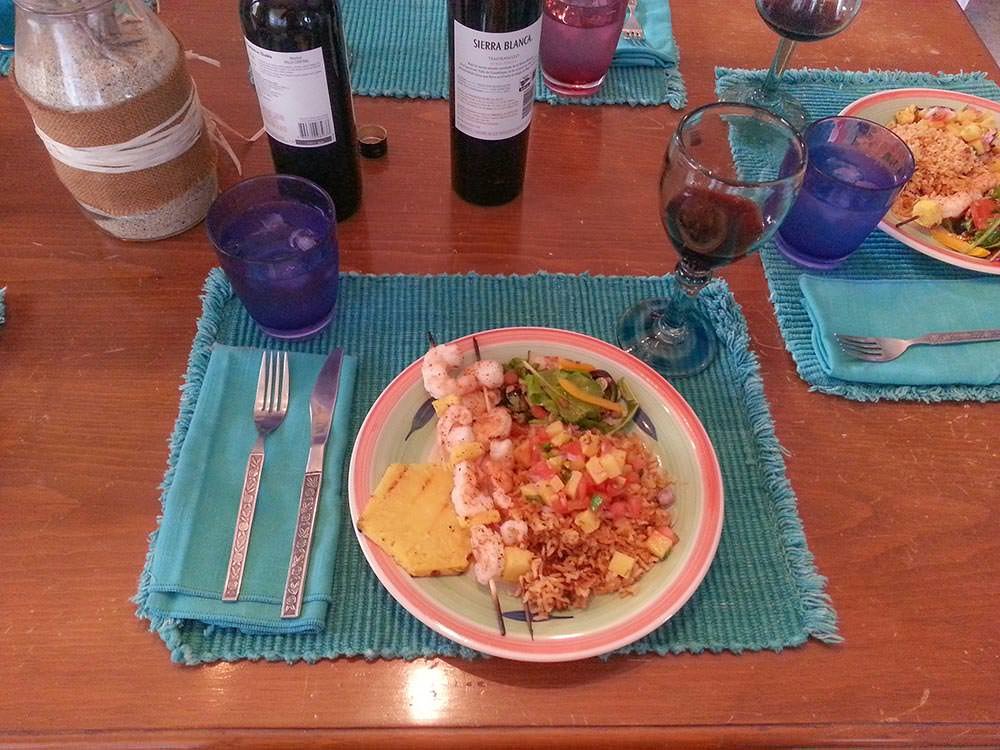 Look at that tasty meal—fantastic, didn’t even miss the whitebait fritters at all! 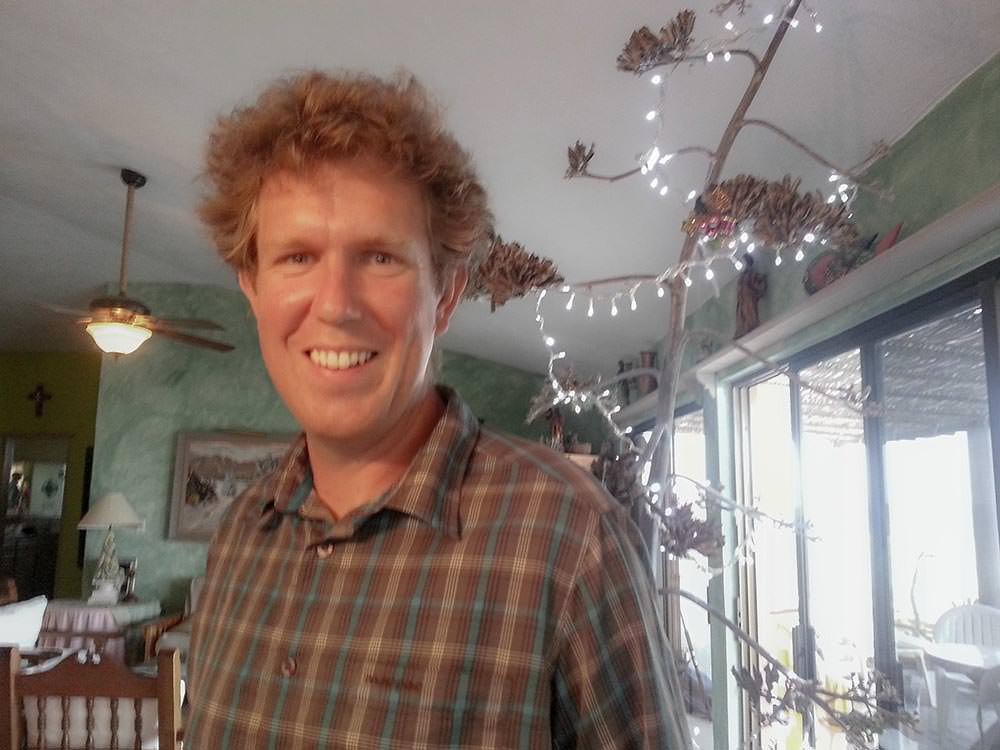 There were even some Christmas Elves working away on the margaritas, although as the evening wore on, they became increasingly heavy-handed with the tequila. 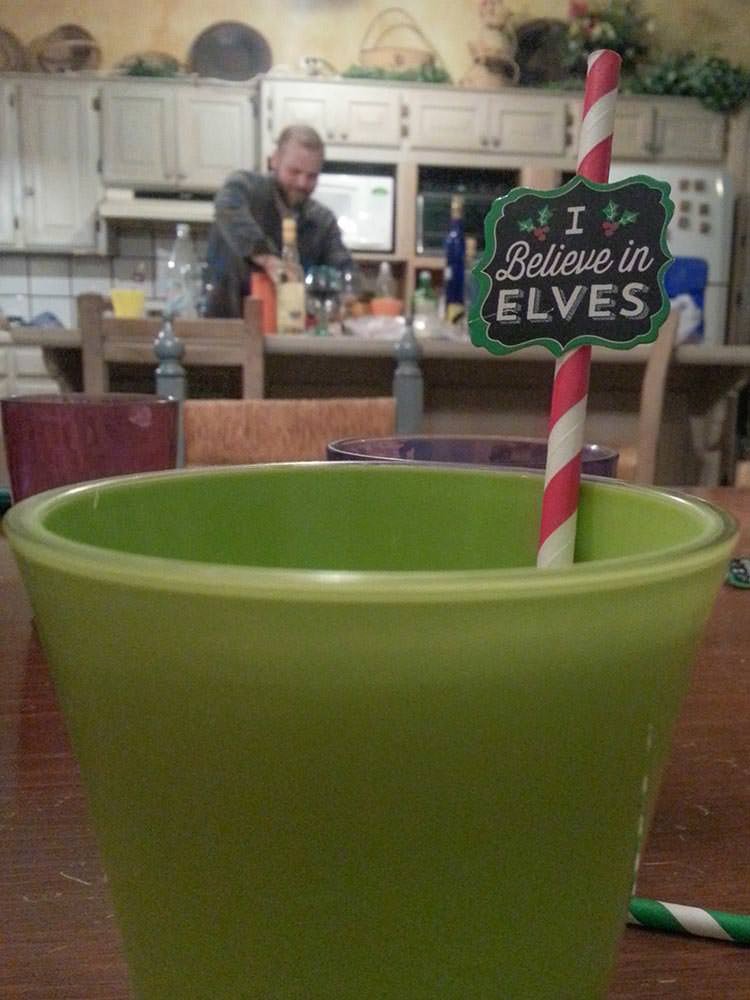 We thoroughly enjoyed out Christmas dinner with our Baja family, it made us feel like we were right at home for Christmas. Renewed by an early morning Boxing Day coffee to get us moving after the festive margaritas from the night before, we were ready to continue our journey south along the coast.