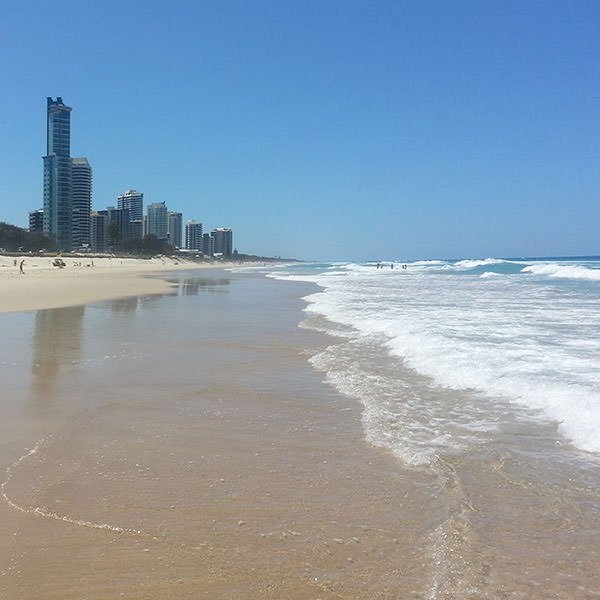 Things have been pretty hectic with last-minute trip prep of late, but I decided it was well past time to start working through and publish some of the nearly written blog posts that have waited in the wings for a while. So here’s some more about Australia:

So yeah. It was alright. Can’t complain.

We have to admit that we didn’t approach the Gold Coast in the traditional way, spending very little time on the golden sandy beaches and opting to completely skip the theme parks. The call of the rainforest proved to be irresistible.

We spent a couple of days wandering around Springbrook National Park and Tambourine Mountain. 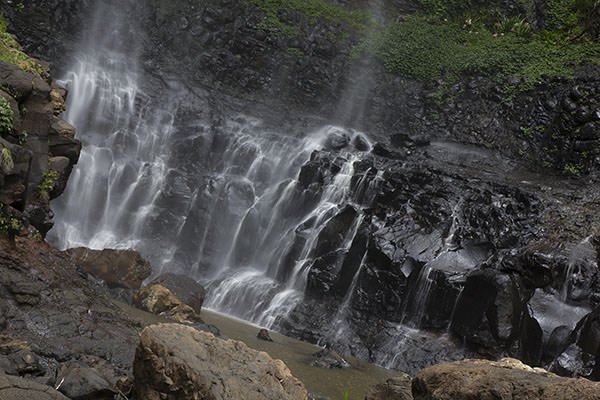 I’m a sucker for pretty much any waterfall, so given that most tracks we walked lead to at least one waterfall, I spent practically the whole time trundling around with a big dumb grin on my face: 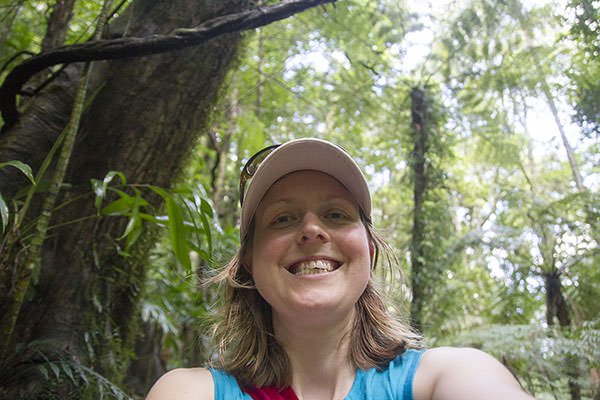 Ben enjoys a good walk, but doesn’t really share my enthusiasm for waterfalls. 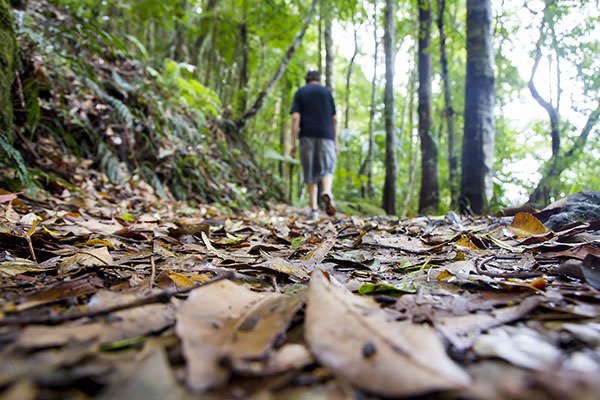 You can imagine my excitement when tracks went directly underneath waterfalls. 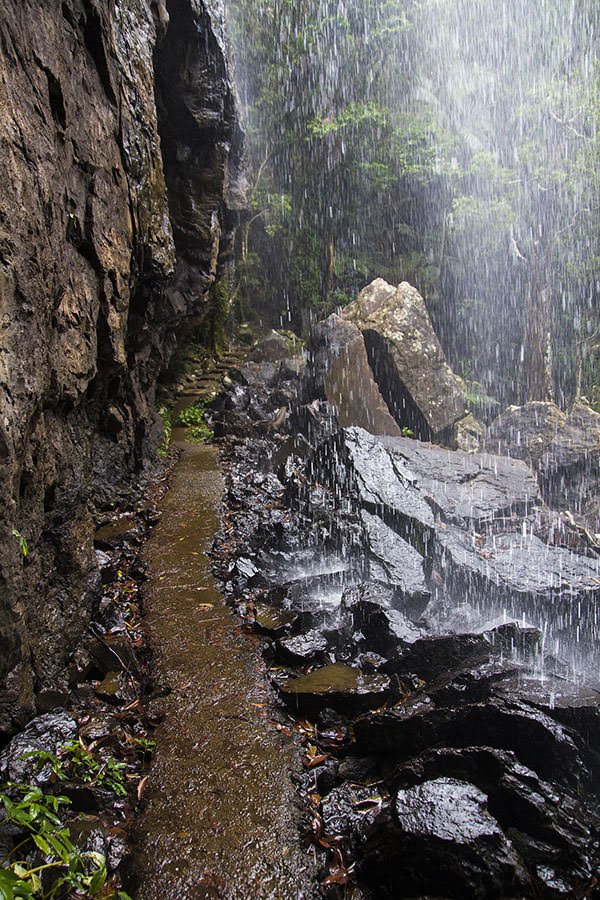 Or when we ended up in glow worm caves with waterfalls through a hole in the roof. 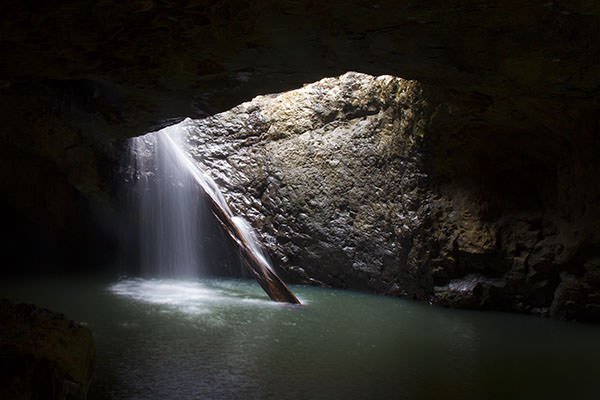 Springbrook National Park also appeared to home to every cicada ever born (er hatched, whatever they do?). After leaving the forest our ears were ringing for quite some time, it is amazing what a cacophony these critters can muster when it takes their fancy. We never actually saw any of the cicadas themselves. They were far too well camouflaged, but they did leave their old exoskeletons lying about all over the place. 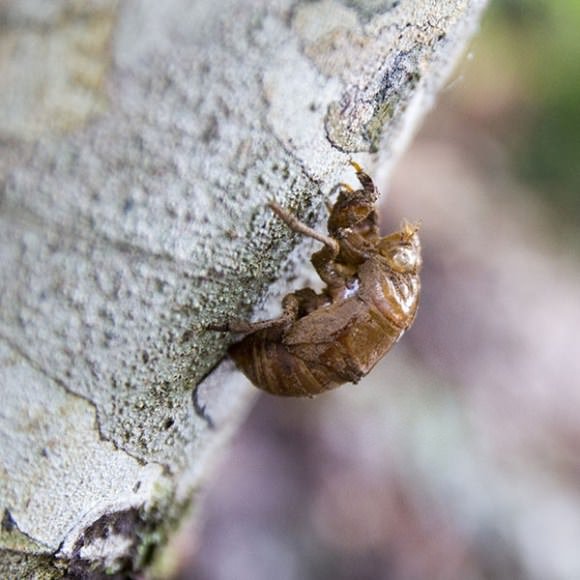 The other insects in the National Parks were all rather impressive. 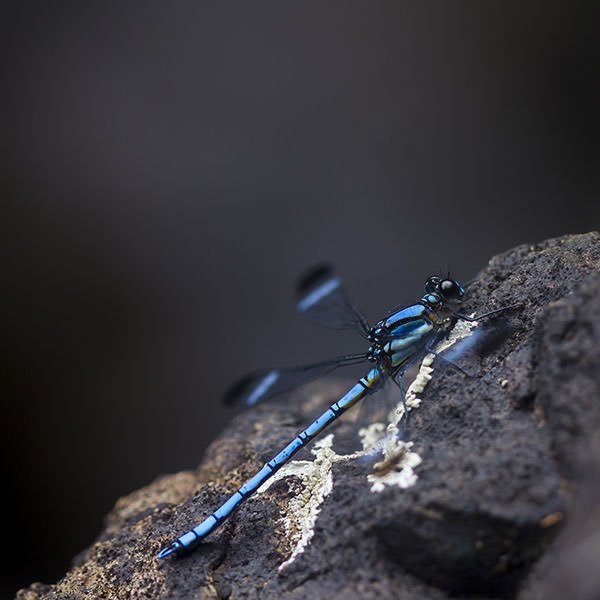 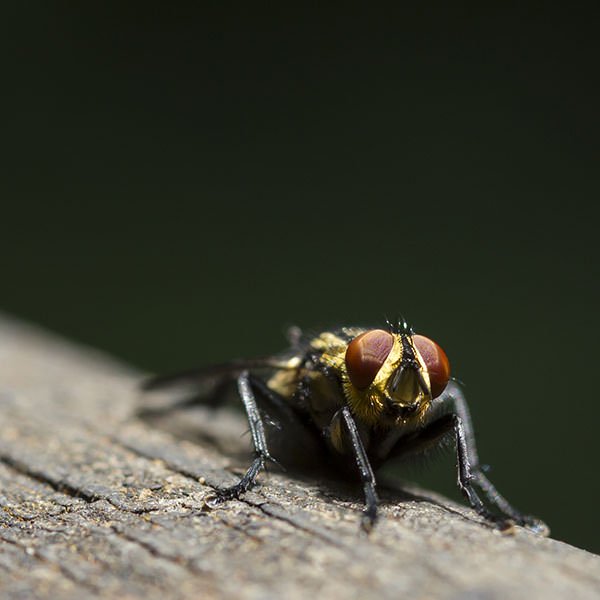 Also very impressive were the 3000 year old Antarctic Beech trees. They’ve been around a very long time. The name makes it sound like they are a long way from home, but they are actually part of a small pocket of forest that is a remnant from when Australia was part of the Gondwanaland supercontinent. So in that sense, the 3000 years these trees have been around is just a blink of an eye as far as the forest is concerned. 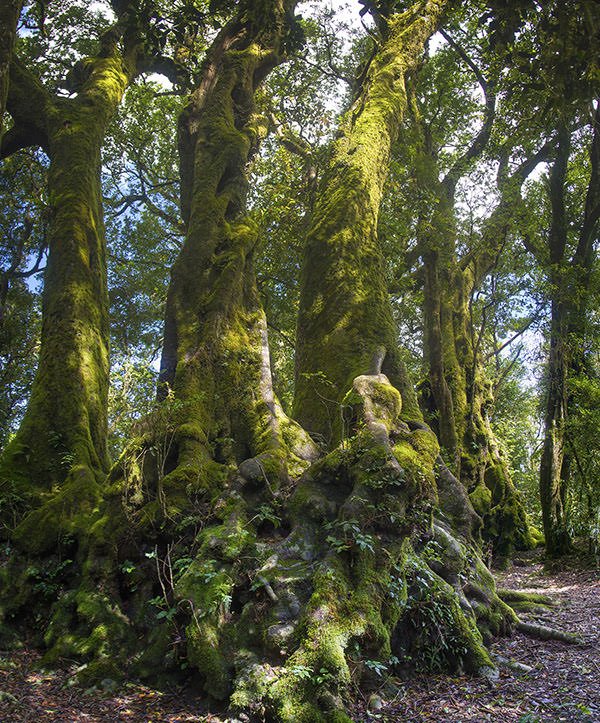 The beech trees of Springbrook National Park that were busy being trees before the Parthenon was even designed are pretty amazing. 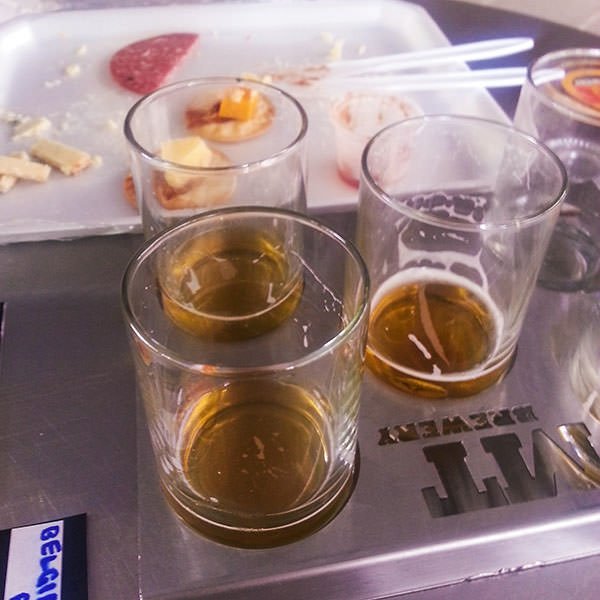 One important thing that we learnt during our time in Australia is that nature there is rather mean and pointy. To understand what a shock to the system this is, you have to realise that we come from a country where our national bird has evolved into a pointy beaked flightless chicken due to lack of natural predators. There’s just not really anything that savage here. In New Zealand the dangers you face from flora and fauna consist mostly of:

In Australia, we really started to get the feeling that mother nature was making up for taking it easy on New Zealand:

This is what lurks in rivers. Not eels. Nope, something much more… hungry. 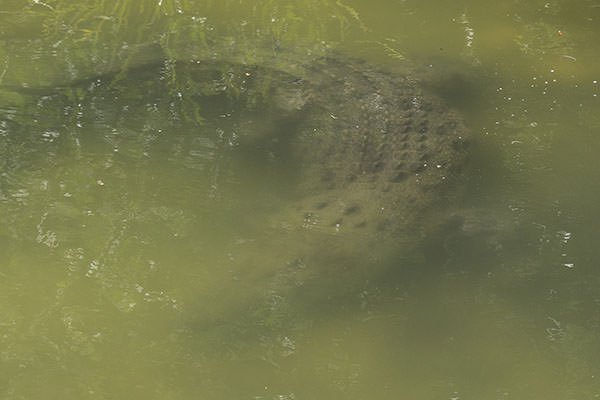 There were altogether too many sizeable spiders. This one I suspect was a harmless orb web, but given that it was the size of a milk tanker* I have to admit to finding it rather concerning.
(*Size possibly exaggerated due to heightened fear response.)

This chap decided to nibble on my ankle. Within a two-minute walk of a brewery. Surely the area around breweries should be sacred? 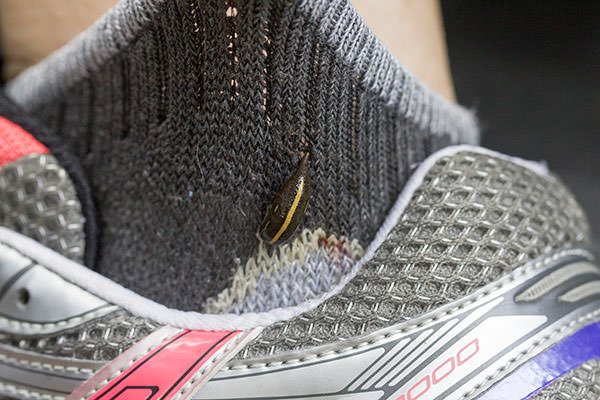 There is actually a long list of things you need to fear. See if you can spot the key one on this list: 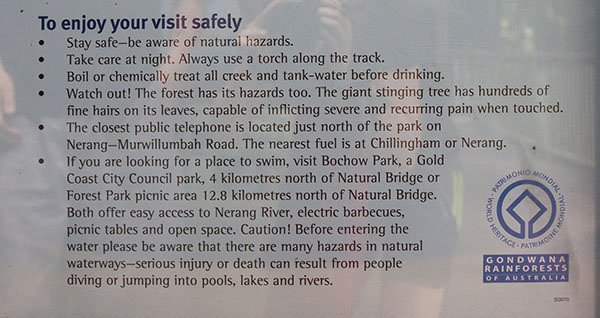 That’s right. Giant Stinging Tree. Seriously. You read that correctly, even trees are a hazard. 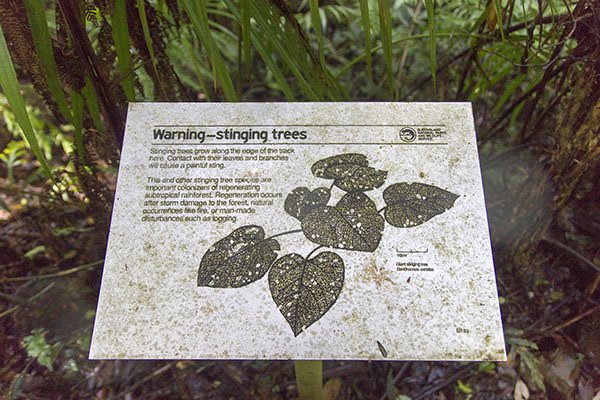 This wasn’t a giant stinging tree, but I still wasn’t game to hug it: 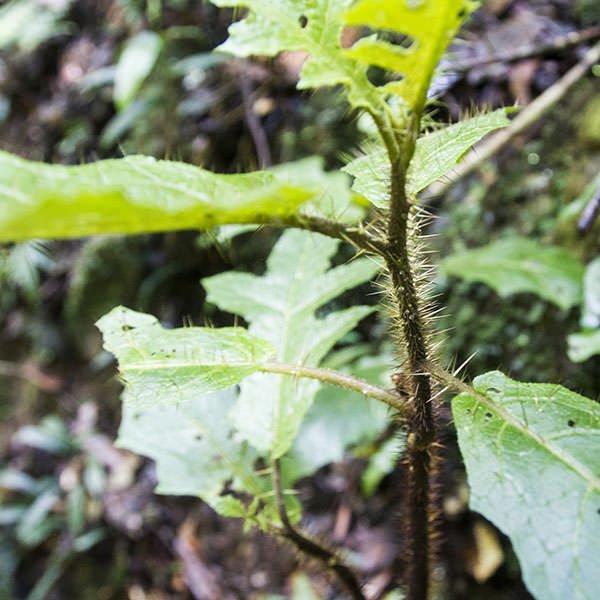 When the trees aren’t attacking us, they are having a go at each other. Heres the sign talking about the strangler fig. That’s right. A ficus with murder on its mind. 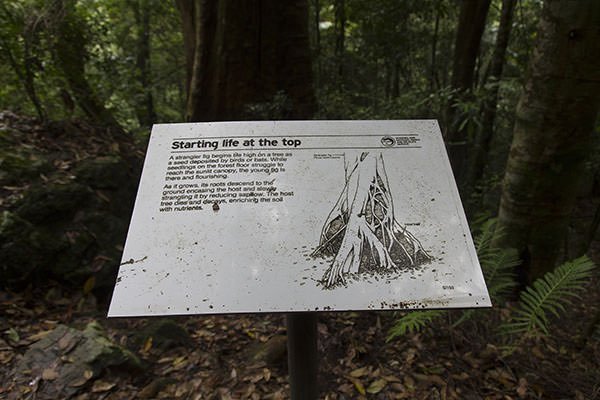 Even the waterfalls are menacing: 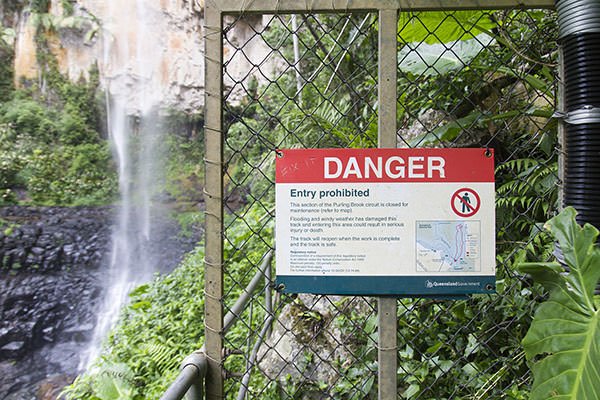 Not pictured here are other classic dangers such as snakes, jellyfish and sharks… such a lovely neighbourhood.

But somehow, despite all the imminent danger we managed to relax enough to take in the scenery. Even spending a bit of time exploring the coast as you’d expect a visitor to the Gold Coast to do. 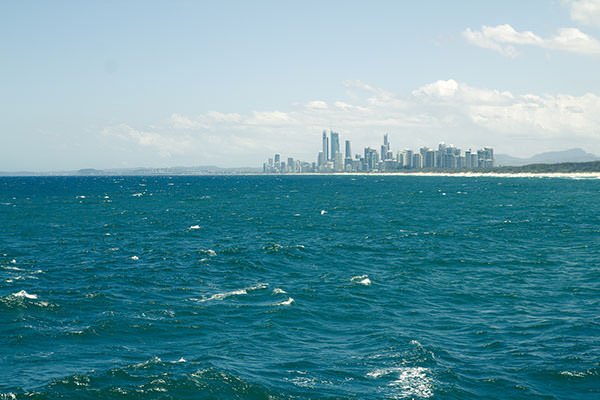 We paid a visit the Currumbin wildlife sanctuary to get a closer look at some of the more elusive native fauna.

These lizards weren’t actually exhibits at the sanctuary, they appear to live there voluntarily.

There were a lot of lizards, luckily I haven’t uploaded all the lizard photos I took, otherwise we’d be here a while.

This owl was in the bird show and was incredibly awesome.

Also, just for good measure there was a macaw.

Time for the obligatory kangaroo photo.

Even a little joey in its mother’s pouch

And the set wouldn’t be complete without a koala

And a sleeping koala

But for us a real highlight of the trip was discovering liquorice chalk in an old-fashioned sweet shop in Murwillumbah. Where has this magical stuff been all our lives? It’s like liquorice bullets, but with dutch liquorice and a tastier candy shell. Magic. 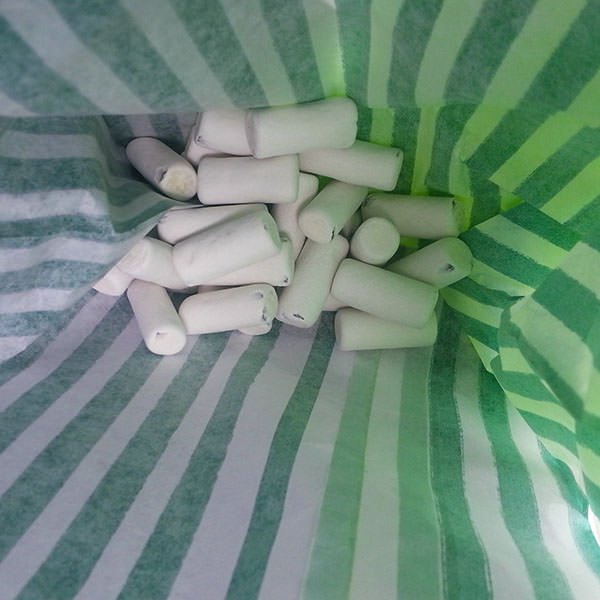 Another exciting discovery was the delicious Pickled Pig Brewery in Tweed Heads. We showed up late on a Monday afternoon. Turns out that they weren’t really open, but were still happy to let us in for a look around and some tasters—before sending us home with a six-pack of delicious organic beers. 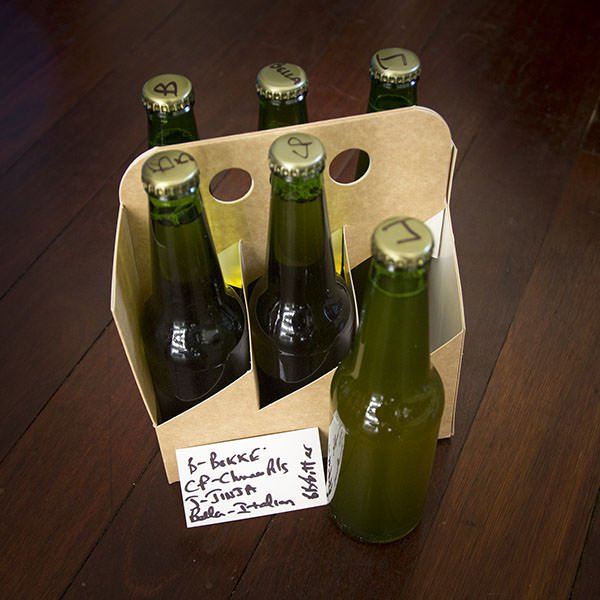 We were lucky enough to catch the tail end of a pretty decent lightning storm. Despite the torrential rain and hundreds of flashes of lightning we were informed that this was a pretty tame storm compared with what is often on offer in the neighbourhood. Tame or not, we were impressed, nothing is better than watching a decent storm from a warm dry house. 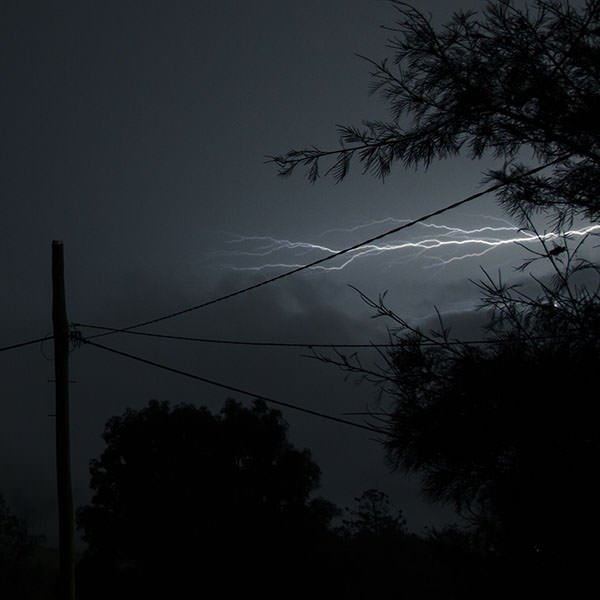 Thank you to Cally, Matthew, Milton, Alex and Red for being such choice hosts too—we had a great time visiting and hope to be back your way for another visit once we finish exploring the Americas. 🙂

animalsAustraliabeachbeerbirdcitydangerGold Coastinsectsleechlizardrainforestsandspidersstormsunwalkingwaterfallwildlife
« Three Years ago
Not winning the lottery—Saving for long term travel: Part One »