It isn’t often in this journey that we simply head south like we are supposed to.

We tend to get distracted, make detours, head back north and hang around interesting places. We generally take our sweet time about actually heading towards Argentina.

Making our way south from Álamos to Mazatlán was one of those few occasions where we did. We were, unbelievably, actually heading in the direction we promised to when we embarked on this trip.

Not wanting to commit to any long days of driving, we travelled slowly, breaking up the journey with several stops.

The first was back in Los Mochis. In Mexico there are these things called ‘love motels’. Travellers recommend them as a cheap option for somewhere to stay when no good camping is to be found, or when you just want a roof over your head. Most have the option to pay by the hour, these places are varying levels of creepy. From the dilapidated shacks with plastic curtains for doors to classy-looking accommodations that rival the nicest hotels in town—at half the price. This is what Mexico means when it says ‘motel’ or ‘auto motel’. Sure, they have hot showers, but will you leave feeling dirtier than when you came in? Probably.

Fact of the matter is, often they are cheaper than campgrounds.

They have garages for your car attached to your room, designed to keep prying eyes from knowing who is ‘visiting’. This also happens to be an appealing option for those who are driving around with all their earthly possessions in their vehicle and want somewhere more secure to park than the street.

Unless you have a tent on the roof. 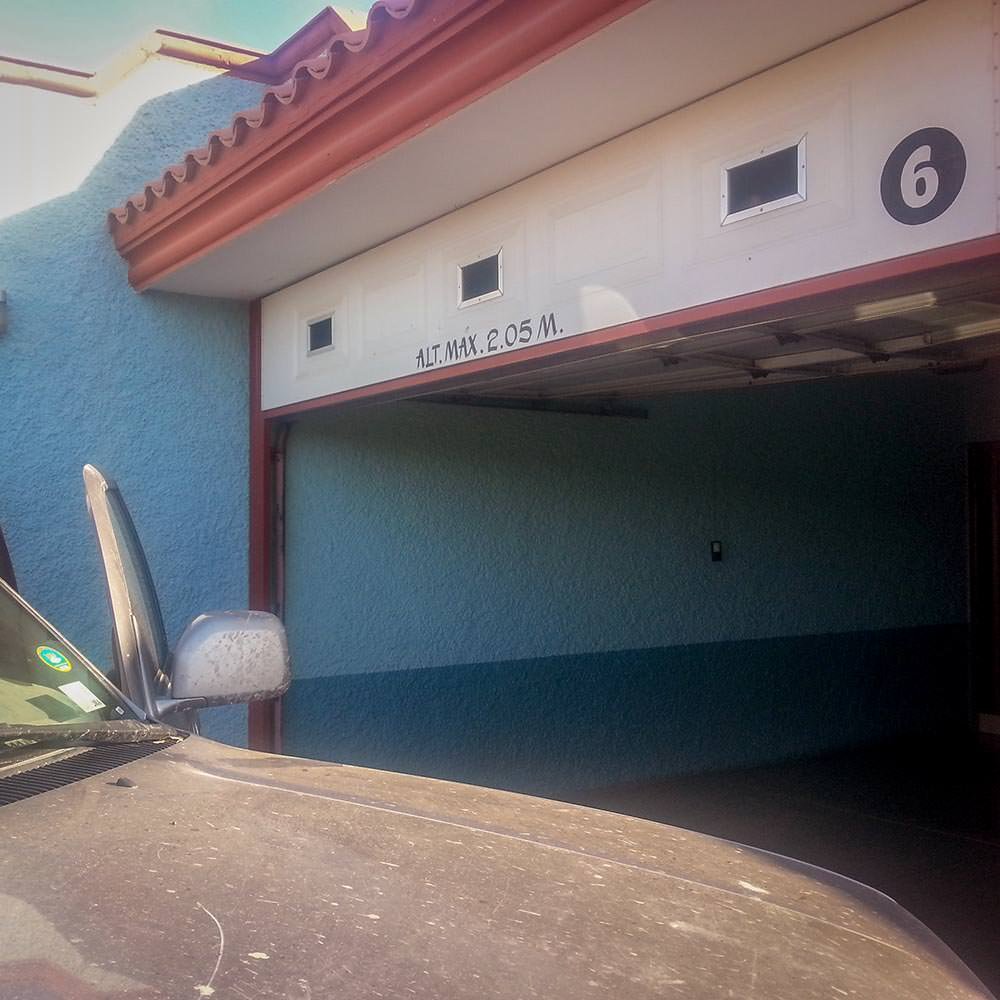 Not going to fit in there.

Then 2.05m of clearance doesn’t quite cut it. Well, no parking at seedy Mexican motels for us today.

Continuing south, we briefly dropped into Culiacán to see what was happening in the middle of town.

We were promptly distracted by all the amazing street art.

We were not really as awe-struck by the town’s cathedral.

Guess we’ve just been looking at too many churches lately.

On the drive between Los Mochis and Culiacán we had briefly followed a small section of toll road. Mexico’s toll roads are notoriously expensive, some people swear by them, others avoid them like the plague. The woes of the Mexican toll road system will be the subject of a future blog post. For now, it is sufficient to say that after paying a pricey toll (after a wrong turn courtesy of Javier (our ill-informed GPS) being unfamiliar with a new road layout)—we were avoiding toll roads at all costs.

It was because of this that our journey down the coast led us to roads with stressful rush hour traffic like this:

An overnight stop in a coastal campground led to the near accidental adoption on one cat. 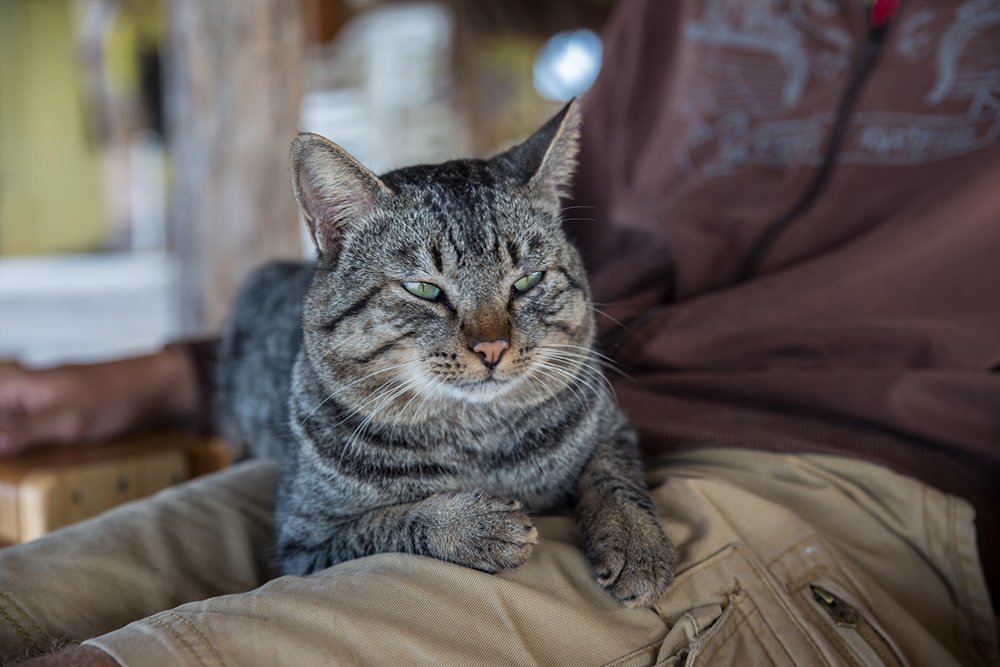 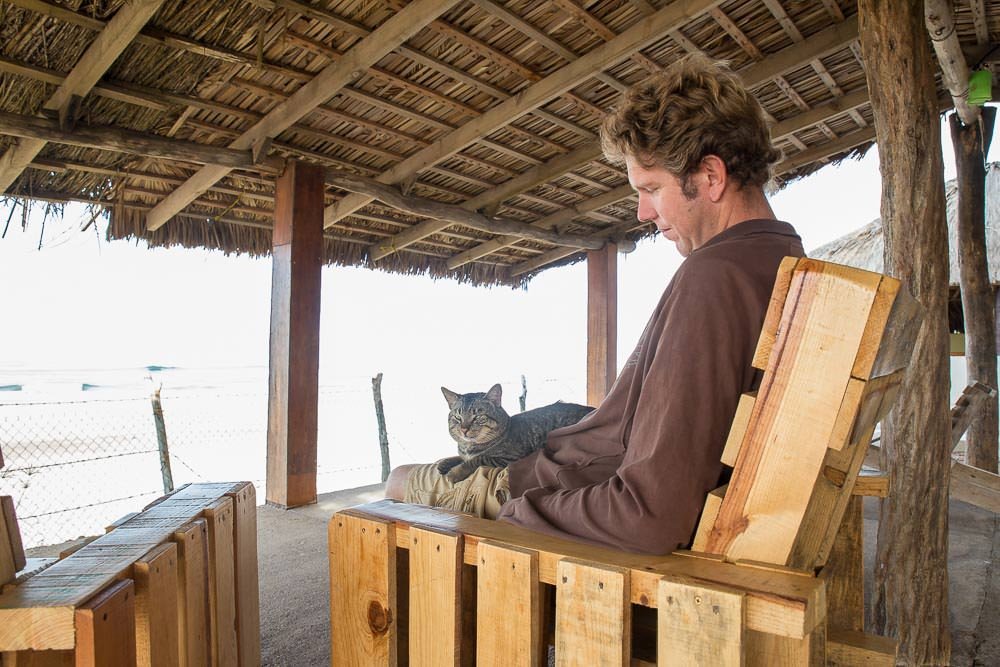 Before our arrival in Mazatlán nearly led to the abduction of a kitten. 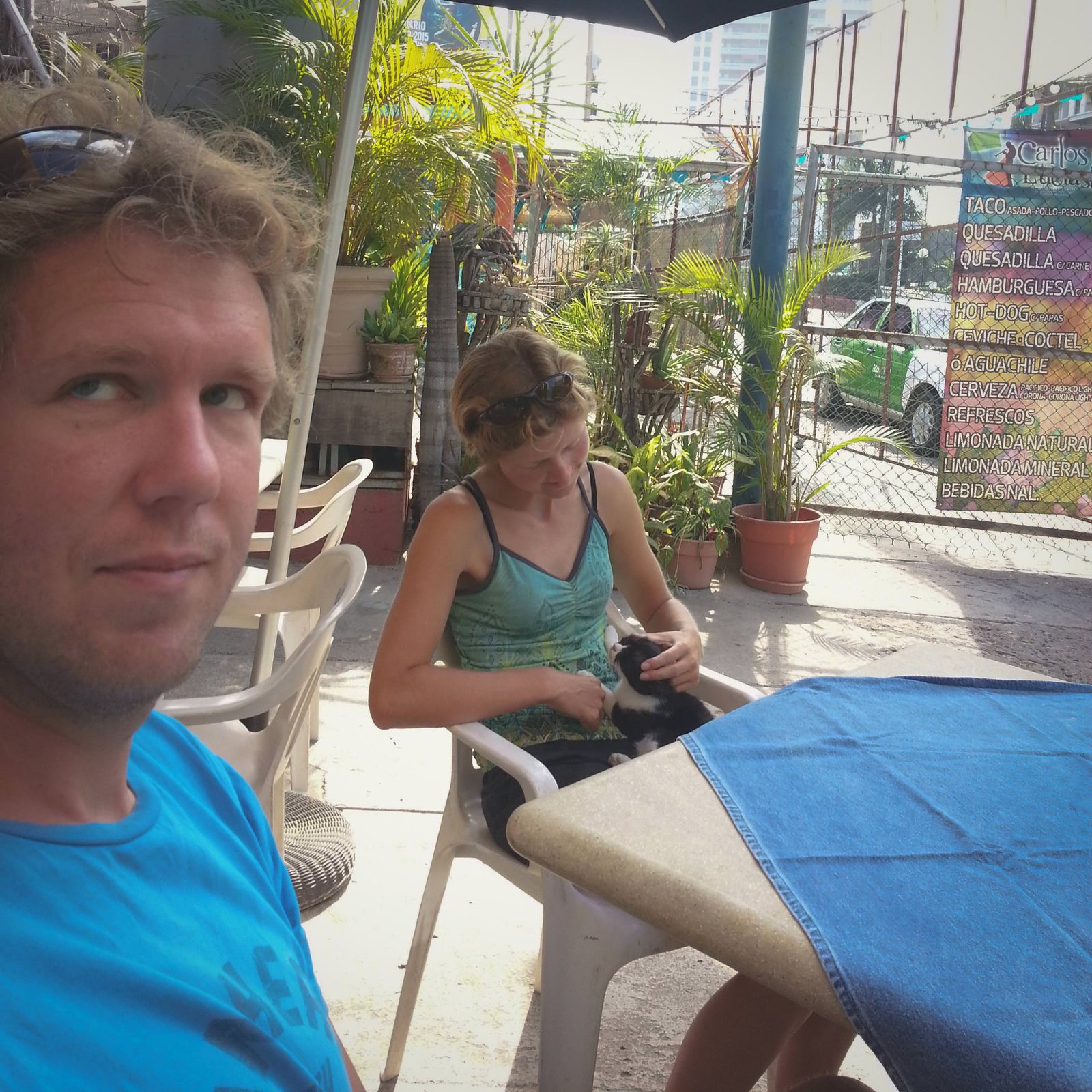 Don’t roll your eyes Ben, we saw you encouraging ‘Puddles’.

We feel the truth lay somewhere in between. There was a colonial centre, built around a slightly oddly restored church.

These seem to be the standard street lights in Mexican colonial towns.

Rosary beads for sale outside the cathedral.

Those bricks are painted on. Not sure about that as a restoration choice.

There was a bustling market, although we arrived about an hour before it was closing for the weekend, so only had time for a quick snack and a brief glance around the other stalls.

This is what powers the market.

There was also a strip of impressive coastline stretching alongside the town. 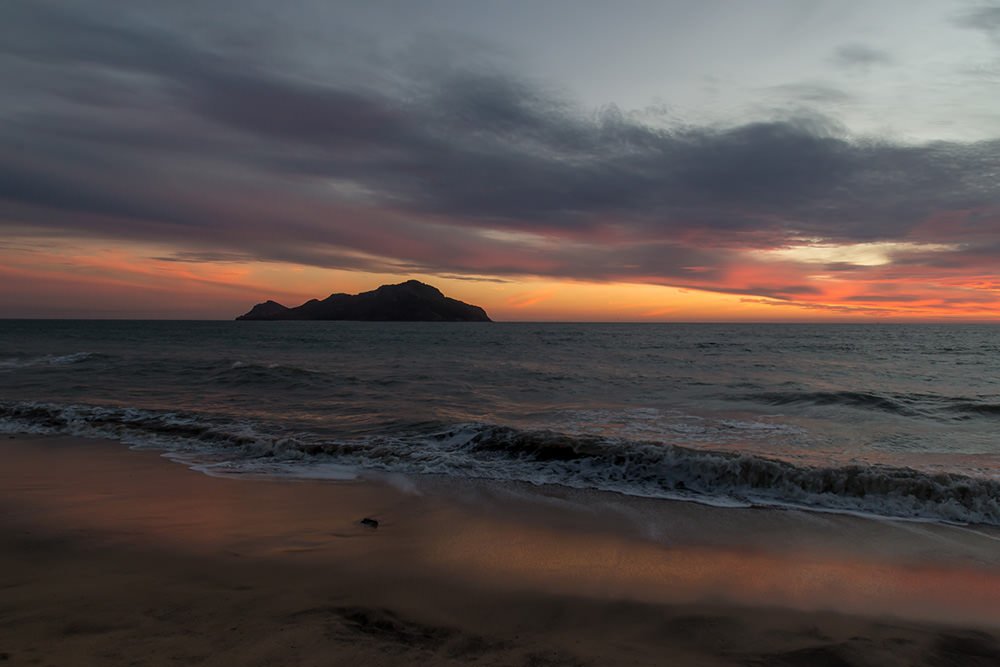 Look at that sunset, from right outside the campground no less. Brilliant.

Although look along the coast a bit further and the high-rise buildings detract from the magic a little. 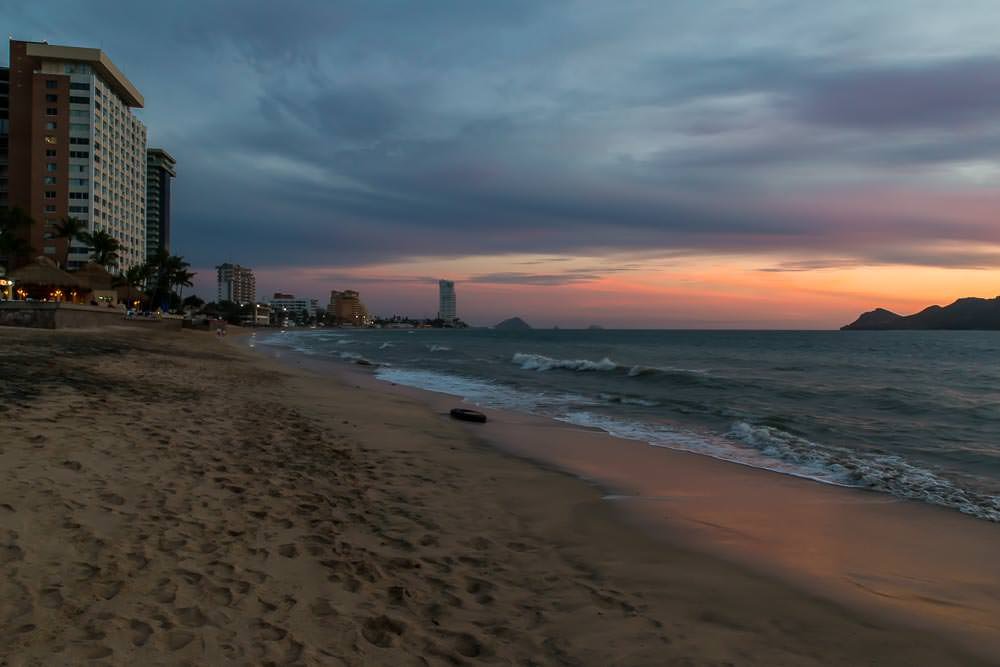 Still a nice sunset, but it loses some of the magic between the high-rise buildings and the abandoned tyre washed up on shore. 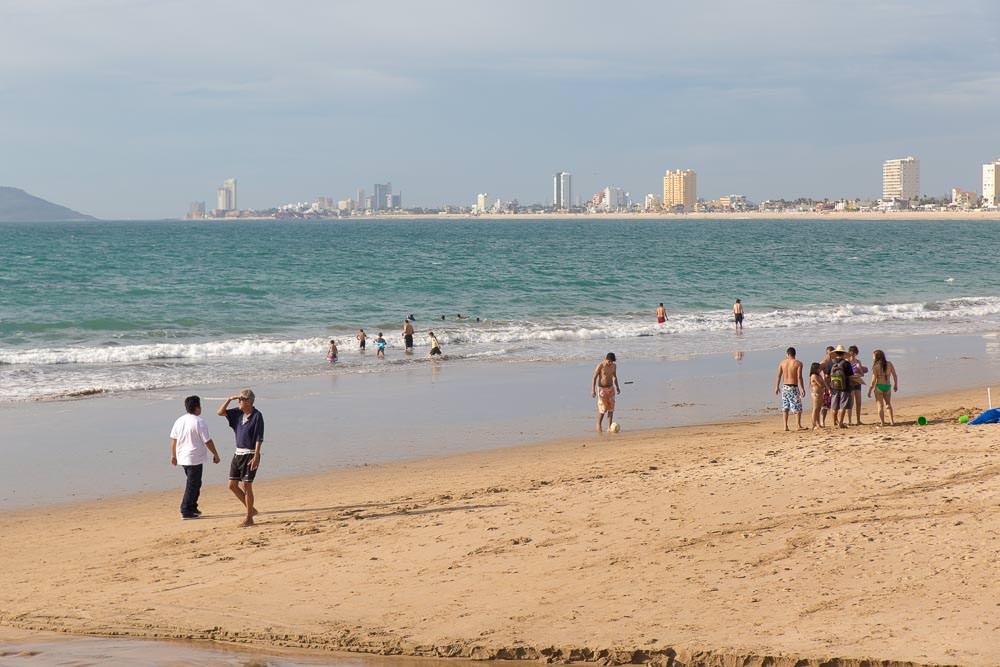 They are nice golden sandy beaches. Just not quite as peaceful or natural as we were used to in Baja.

Our favourite part of town was the area just outside the colonial centre, filled with a mix of freshly painted, badly decaying and street-art decorated buildings. We spent an afternoon wandering around here until our new jandals gave us blisters. Then we hopped on one of the many efficient and affordable local busses to return to our campground.

This looks like a bit of a fixer upper.

The bookshop is closed, but we love their signage.

View from a very small hill in town.

View from a very small hill in town.

Birds, palm trees, and snack vendors in the central plaza outside the cathedral.

With all of these features, you would think we would have loved Mazatlán. But we didn’t.

The campground we were staying in occupied a prime ocean front lot, with beach access right from the camp. Although we just paid enough for the cheap seats, back from the ocean right up against the wall that separated the campground from the nearby busy street—so maybe not as delightful as it sounds.

But the problem was, this campground was right in the middle of the hotel district. The streets were lined with massive concrete monoliths, designed to house happy tourists. Between the hotels were crammed tacky gift shops, altogether too many branches of Señor Frogs and disappointing tourist restaurants. Taxis roared up and down the road, day and night, blasting music from the 80’s and 90’s at full volume. (We haven’t heard Vanilla Ice that many times since, well, ever…).

Everywhere we walked nearby we were constantly rejecting offers for taxis, tours and fishing trips. When we weren’t saying ‘no’ to them we were politely rejecting people trying to sell us the same overpriced giftwares as the lady next door was selling. These gifts were, unsurprisingly also the same as was the chap two shops down, all imported no doubt in the same shipment from the same overseas factory whose employees were wondering why they were producing so many tiny sombreros with American football team logos on them.

All this wore us down.

It wore us down because we had enjoyed such a peaceful, relaxing time in El Fuerte and Álamos. These towns had all the charm that Mazatlán had promised with none of the hassle. Sure they didn’t have beaches, but they made up for it by having character, not having a wall of hotels along the side of the road and not constantly asking us if we wanted to ‘buy something’.

As a result it only took a couple of days before we were ready to leave Mazatlán. Unlike many places we had visited it wasn’t on the list of locations we would love to revisit. Perhaps we let our time trudging the back of the hotel zone taint our opinion of the town. Maybe we didn’t give it enough of a chance. But as we have learned on our travels, there are plenty of places to be, so if you aren’t loving where you are it’s time to move on.

Time to go east instead of south.

Told you we were terrible at going south.