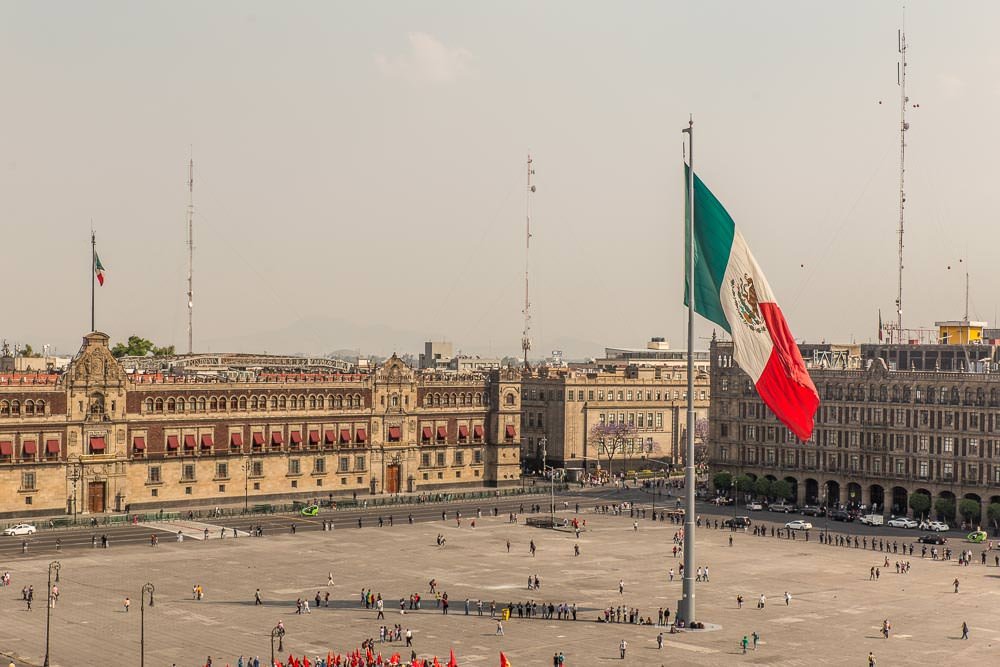 It was only a matter of time before we were sucked into the vortex that was Mexico City. Although driving around the country of Mexico you soon realise that locally, the city is simply referred to as  ‘Mexico’, or ‘DF’ (Distrito Federal).

Everywhere you travel the signs say ‘Mexico’ and the roads guide you to Mexico DF. You are driving around minding your own business and you find the numbers on the signs getting smaller and smaller—Mexico 1000, Mexico 500, Mexico 200—before you know it you are nearly there.

It isn’t that easy of course. The city put strict regulations in place to alleviate the serious smog issues they were facing. This ‘Hoy no Circula‘ programme means a permit is required to drive a vehicle within the confines of Mexico City. Certain vehicles are allowed to drive on different days of the week. The rules get kind of complicated, it depends where your car is from, how old it is, what your number plates end in, what coloured sticker you have, your horoscope for the day, what you ate for breakfast, that sort of thing…

Conveniently, tourists can apply for a permit to use their vehicle for two weeks out of any given six months.

That is if you want to drive there—with the expensive toll roads, parking issues and confusing road layouts all promised to us, we opted to park up—then head to town sans 4Runner.

These spendy, spendy toll roads around the outskirts of Mexico DF are as close as we got to driving in the city.

We left our vehicles at the RV park in Teotihuacan. Packed our backpacks and made for the big city.

When we say big city, we actually mean huge. the greater metropolitan area of Mexico City is home to over 21 million people.

That’s quite a few.

Mexico Distrito Federal itself, excluding the surrounding urban areas has a population of 8.8 million. These 8.8 million people live in an area smaller than New Zealand’s Stewart Island. (Population 381 in 2013 according to Wikipedia).

Imagine that. 8.8 million people living on Stewart Island. Not sure how the locals would feel about that.

You might expect this to mean that the city itself is chaotic, crowded and tricky to navigate.

Completely the opposite is true. 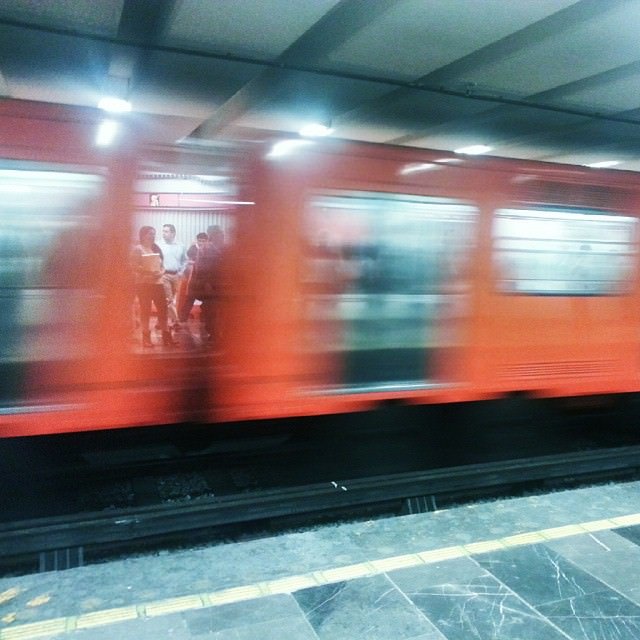 The central suburbs of Mexico city are not filled with the gridlock traffic you might expect. The Metro is efficient, reliable and affordable. The public transport makes navigation around the city centre a breeze. This might not be the story in every area of the city—we certainly didn’t visit the whole city. It is after all, rather large. Nor is it only true of the central city. On the way out, we hopped off the subway at a far flung stop well away from the sanitized heart of the city, but apart from having a bit more traffic, a lot more makeshift market stalls and uncollected roadside trash this area also fell short of the horribly crowded picture you have in your head when you think of 8.8 million people living in such a condensed area.

We found ourselves in the heart of a city that was not only pleasant, but inviting, interesting and intriguing. Packed to the brim with enticing museums, galleries, performances, shows, events, exhibitions, markets, food stalls, delicious restaurants, historical buildings, wide open parks, statues, plazas, even some ancient ruins, there is enough to keep someone entertained in the city for weeks, probably months.

We had three days.

With a backlog of ‘big city’ things to check off the ‘to do’ list, we spent most of one day scampering around sorting out odds and ends around different parts of town.

That left us with two days.

We had booked into an AirBnB apartment with our friends Paula and John (Our Bigger Picture), so we had a great little home base in the heart of Colonia Roma. It was a short walk from a Metro station, this meant the whole city was practically at our doorstep… we just didn’t have enough time to see it all.

A highlight of our time in Mexico City was a visit to the Anthropological Museum. This is possibly one of the grandest museums we have visited. 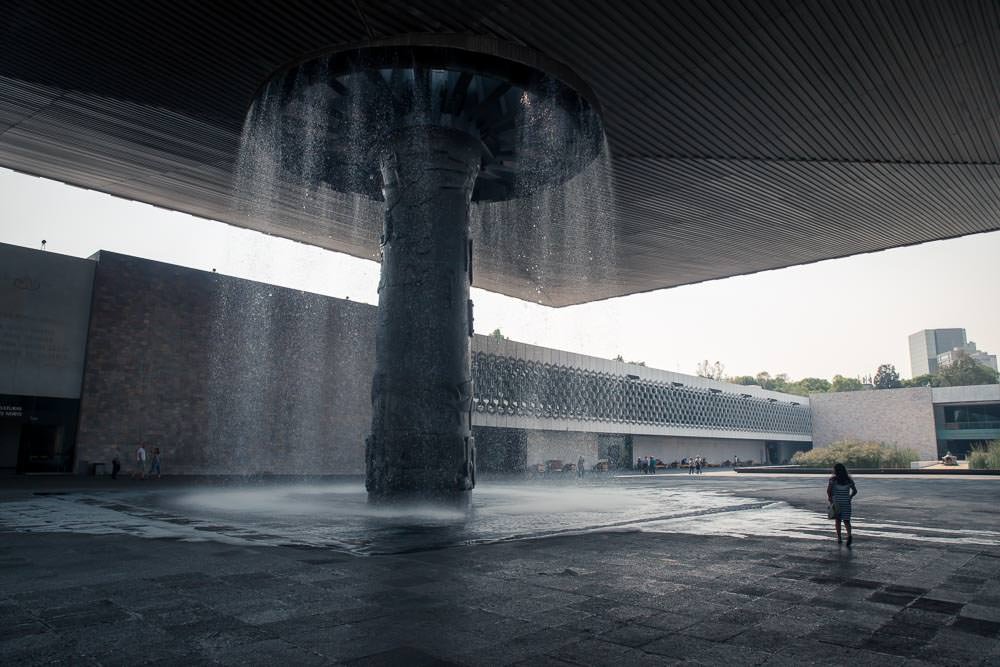 The rather imposing fountain in the central courtyard of the museum. Actually courtyard sounds like an understatement, let’s call it a plaza.

Much like the vast collections of the Museum of Natural History in Washington DC, it is a place you could make several return visits to without really experiencing it all.

There were a huge variety of tapestries, artwork and handcrafts on display. These were representative of many of Mexico’s diverse cultures.

There was a monumental collection of ancient artefacts.

With plenty of ancient works of art.

All these ancient works are fantastically well preserved.

Although there did seem to be a recurring theme to the art. We reached the conclusion that the Ancient Mesoamericans were not to be messed with. If the Spanish had taken the time to check out these stone carvings properly, they probably would have turned their ships around and sailed home in terror.

Clearly not a sculpture of an ancient god of butterflies and happiness.

Although he does have a very dapper skull belt.

Just some stone hoops from the popular ancient pastime of deathball. They just call it ‘the ballgame’ on the signs. But we all know it is really deathball.

Skulls were a recurring theme.

What shall we get to display the vase on? Oh, I know—a human spine. Ancient Mesoamericans—don’t mess with them.

I feel bad for not noting what this was a sculpture of. In the absence of further information, let’s just call it a death chicken and marvel at its tusks.

The long nose reminds me of Gonzo, yet I would still be shaking in my boots approaching any building decorated with these faces.

Aztec Calendar Stone/Sun Stone. Probably a bit big to hang behind the toilet door. Certainly not ideal for posting overseas for the relatives at Christmas time.

Aside from the terrifying sculptures, there were also some preserved treasures from uncovered Mayan burial sites.

As well as several replica temples dotted about the museum grounds.

It was a museum one could easily get lost in for hours, which we did, and it still wasn’t enough.

Just outside the museum we caught a performance of la Danza de los Voladores: 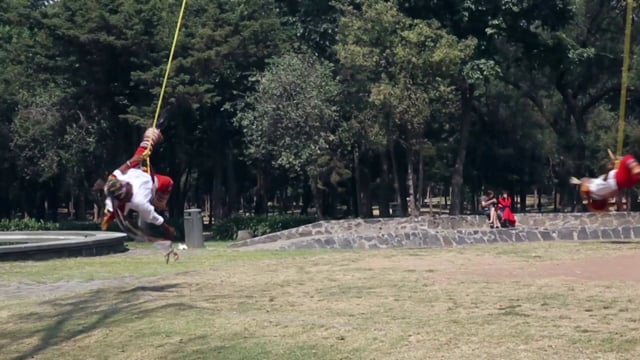 We really regretted out decision to visit this museum late in the day. We had spent the first part of the day wandering around, we hadn’t eaten enough food. We had tickets to the Lucha Libre that evening—time in the museum was short and our patience for reading the descriptive labels was shorter than usual. So much information that we read didn’t stick inside our tired noggins. We didn’t leave with a clear enough understanding of the history of the Mexican people. Although, even through the tired haze fogging our brains, we couldn’t help but form a new appreciation for the huge diversity of cultures that make up modern day Mexico as well as a sense of awe at the country’s rich history recorded in the pristinely preserved art and artefacts. The collection was well presented and awe-inspiring, we wish we had allowed ourselves a lot more time to soak it all in.

But in our two day whirlwind tour of Mexico City, time was a luxury we didn’t have.

Next up, we had a Lucha Libre date. We headed down to the local stadium to check out some Tuesday night wrestling. With Paula and John—who were not entirely convinced that this was the most effective use of our time in Mexico DF, but were willing to play along.

Mega cups of beer in hand (order one beer, they put two in a plastic cup for you…) we settled in for a night of chaotic entertainment.

Just happy it isn’t me shouting through the window at the chap we can’t understand. Tickets sorted—Thanks Paula!

Clearly not a Lucha Libre pro.

Maybe we should come back on Saturday…

We’re not sure if was the double servings of beer or the eventful entertainment unfolding in the ring, but by the end Paula and John were both sold on the whole Lucha Libre thing. But how couldn’t you be? The wrestlers had names like ‘Blue Panther’, “Rey Escorpion” and “Super Porky”. You knew it was going to be good.

A brilliant thing about being in the big city was visiting nibbly foody places and crafty beery places. Two of our favourite hobbies.

Time to refuel on life’s necessities.

Nibbly fancy foods. (Technically a bit too salty, but we weren’t arguing, we do thoroughly enjoy nibbly things.)

Luckily Paula and John shared our enthusiasm for both beer and food, it made them pretty easy folk to hang out with for a day or two. Although I’d really prefer if the two of them could just make a bit more effort to look a little shorter in photos. 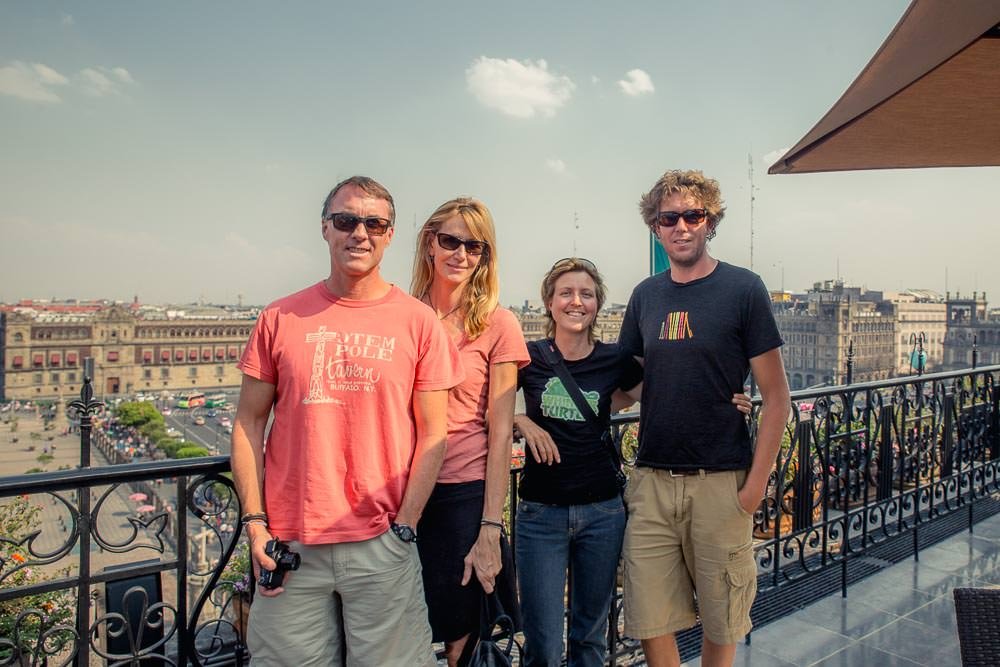 Some giants and Emma.

We wandered around the centre of town, soaking up the sights and sampling the food.

Zócalo and cathedral from above.

The even grander interior.

The even grander organ.

Patterns of light and shade on the marble floor.

This expansive cathedral is however, sinking.

With all the grandeur around it is easy to overlook the many paintings hanging on the cathedral walls.

Lined up in the shade of the flag to escape the afternoon sun.

The late afternoon sun fades from the Zócalo.

There was an exhibition of photographs from old timey tourist photographers. We of course had to try out the various backgrounds.

Emma insisted on visiting the Inquisition Museum and the Museum of Medicine. Both were a bit disappointing after the huge Anthropology Museum. Also their weren’t as many pickled limbs as we’d been hoping for.

John had watched an Antony Bourdain episode where the wandering chef sampled his way through Mexico City. Having already ticked several of the items of the list suggested on Bourdain’s show—Lucha Libre, street cart dinners, aimlessly exploring the city—John was adamant that we must find the final piece of the puzzle. A cantina that would serve you free food to accompany the booze you were ordering.

We all scoffed and laughed and said this wouldn’t happen. When we walked in to the brightly lit ‘cantina’ (may have just been a 70’s looking restaurant with bright lights, cafeteria seating and hospital style lighting) we scoffed and laughed even more. But by the third round of drinks we were all suitably impressed with the dry pork rinds they had been bringing out that we ordered a fourth round. While the free snacks may not have been as forthcoming as John had led us to believe they would be, the drink certainly was free-flowing. Bring on more booze, pork rinds and weird pickled veggies. We even received some friendly domino lessons from the neighbouring table. 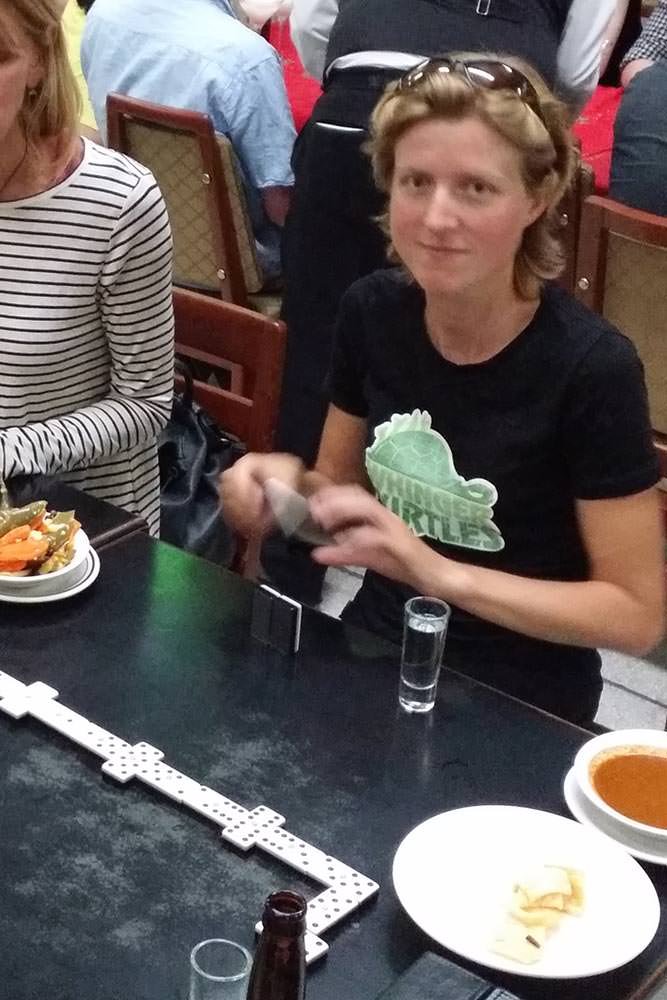 More pork rinds? No thanks.

Several rounds of booze and pork rinds later, we called it a night and a partial success.

The next day we retracted the word ‘success’ as we all limped off our separate ways to nurse the headaches we had earned all in the name of a few free pork rinds. Paula and John were spending a few more days exploring the city, we were heading to Teotihuacan to look at some ancient ruins… once the headache subsided.