Ancient ruins and the sounds of the apocalypse 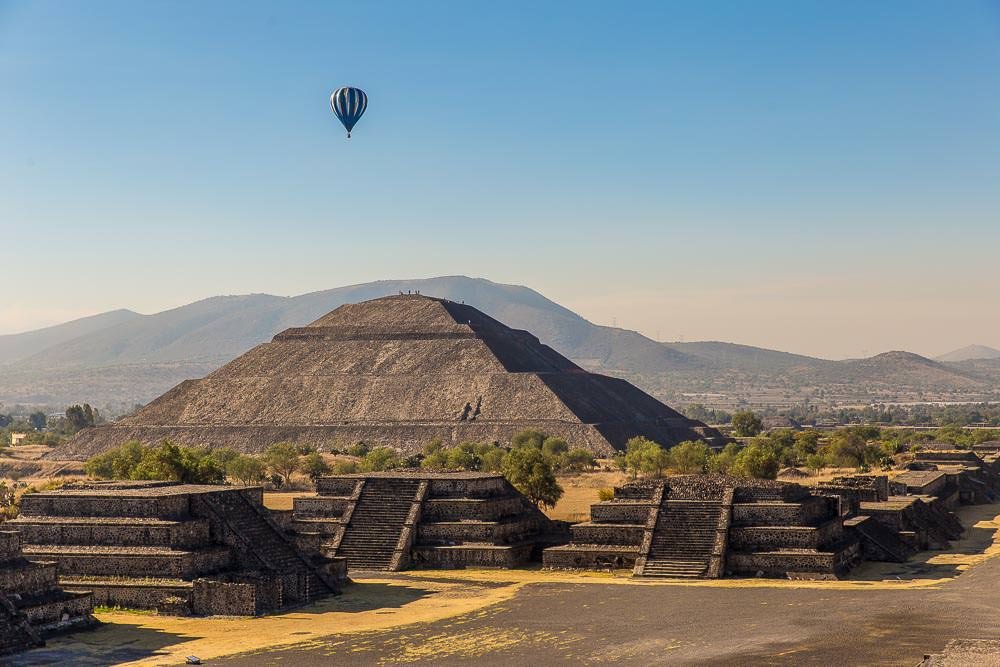 Sometimes we find ourselves standing in places which really remind us what an amazing journey we are on.

In these moments we stop, we take a deep breath, we look at each other and agree that we are truly fortunate to be here. That the decision to quit our jobs, sell our stuff and move into a 4Runner with a roof top tent was the best decision we have ever made.

Sometimes these thoughts cross our mind on wild, windswept beaches with not a living soul in sight. Other times we find ourselves just standing in appreciative silence amidst the hustle and bustle of a bright and chaotic town.

On this particular occasion, we were reflecting on our journey as we surveyed the site of Teotihuacan from our perch on the Temple of the Moon. We had just climbed to the top of the grand Temple of the Sun, walked the Avenue of the Dead then climbed the second largest temple of the complex to watch the hot air balloons drift over the ancient site in the fresh morning air.

This was the culmination of a practically perfect couple of weeks. We had visited the surrealist sculpture gardens in Xilitla, watched hundreds of thousands of birds dance in the skies above San Miguel de Allende, witnessed the result of the most spectacular butterfly migration on earth and even made a brief visit to the fascinating, thriving heart of Mexico, the Distrito Federal.

On this particular morning, we arrived in Teotihuacan bright and early, just after they opened the gates. This was in fact, our second visit to the site, we had popped by one afternoon a few days earlier, just to have a bit of a look around and see the museum.

This was the scene which had greeted us at the base of the massive Temple of the Sun on that first visit. 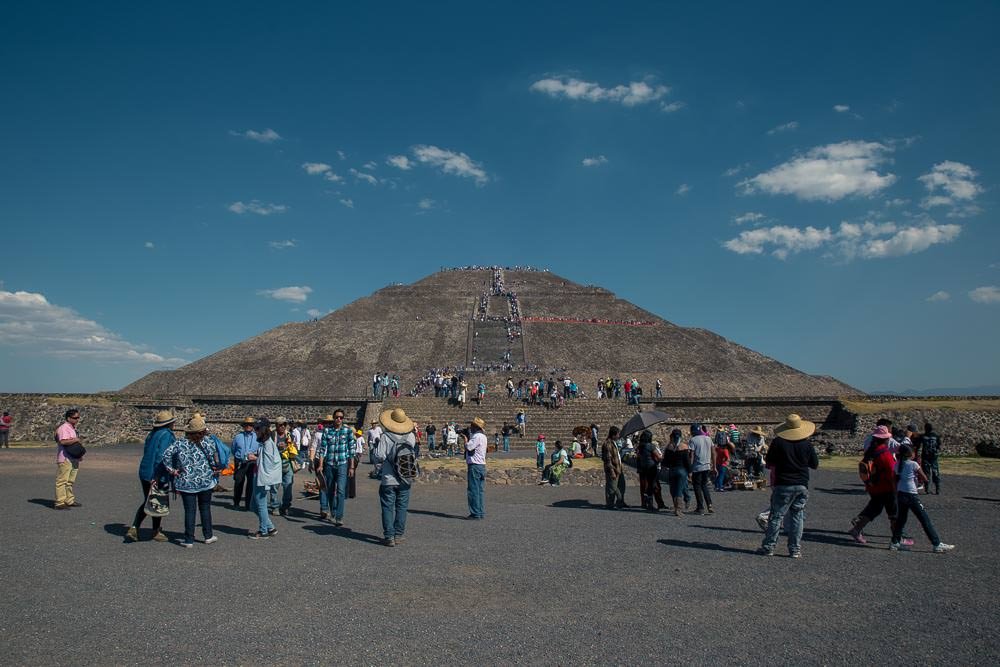 There’s a bit of queue to get to the top of the temple. 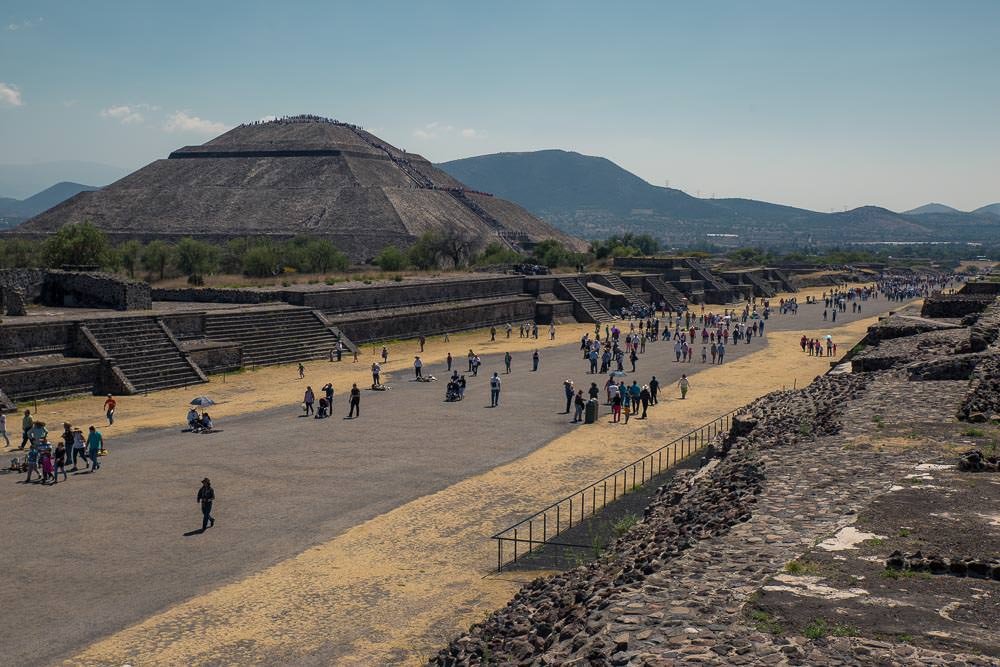 The good thing about long term travel is that you have the opportunity to choose the time of day that you visit popular places. Often meaning you can avoid the crowds. Here you can see that, aside from a group that appeared to be making their way inside the pyramid, on our second visit there was a clear run straight to the top of the third largest pyramid in the world. Nice. 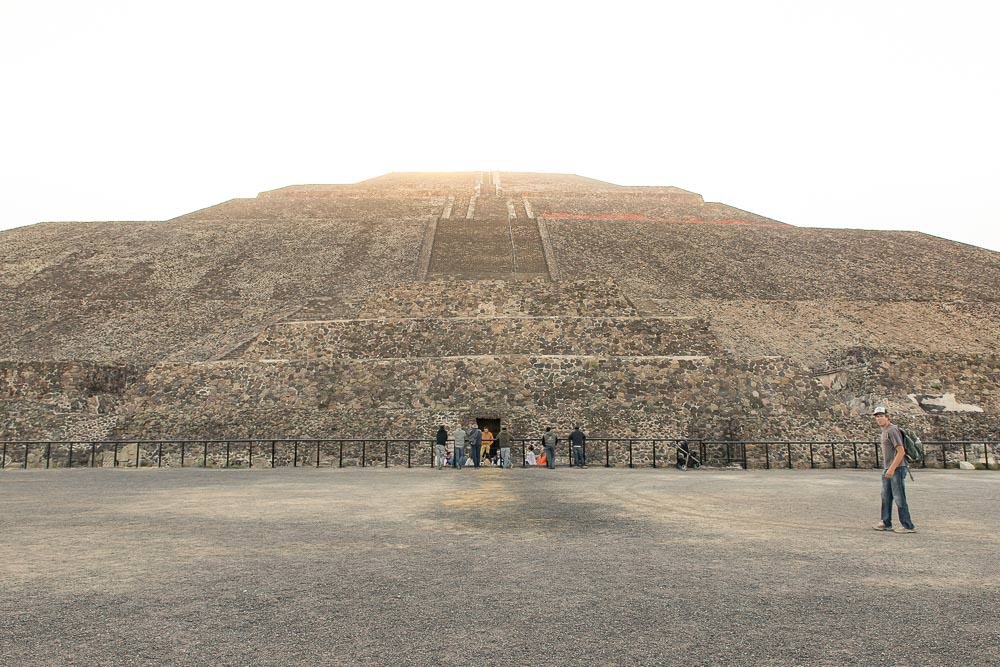 Nobody on the stairs today. Although we did consider trying to tag along with the group who looked like they were headed inside the pyramid.

And run we did. Or at least Emma did, Ben casually strolled up the steps—a much more sensible pace—while Emma scampered about snapping photos and burbling excitedly about pyramids and history and whatnot. 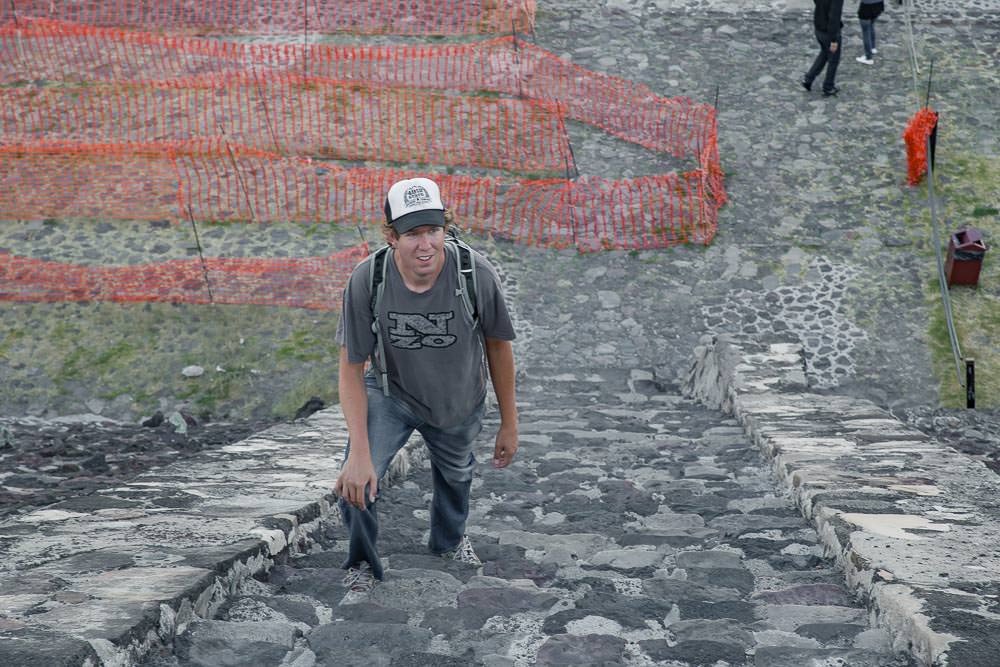 I wonder how many steps there are…

We got to the top. Realised that while the view was pretty impressive, we were actually standing on top of the most interesting thing to look at in the immediate area.  The best place to sit back and soak up the atmosphere was actually going to be the much smaller Temple of the Moon down the other end of the complex. At this point I am reminded of the wise words of the enthusiastic travel show host Carl Pilkington:

Now as caves, go the Temple of the Moon isn’t really one. At all. It is a rather imposing temple. Also we don’t live in it. 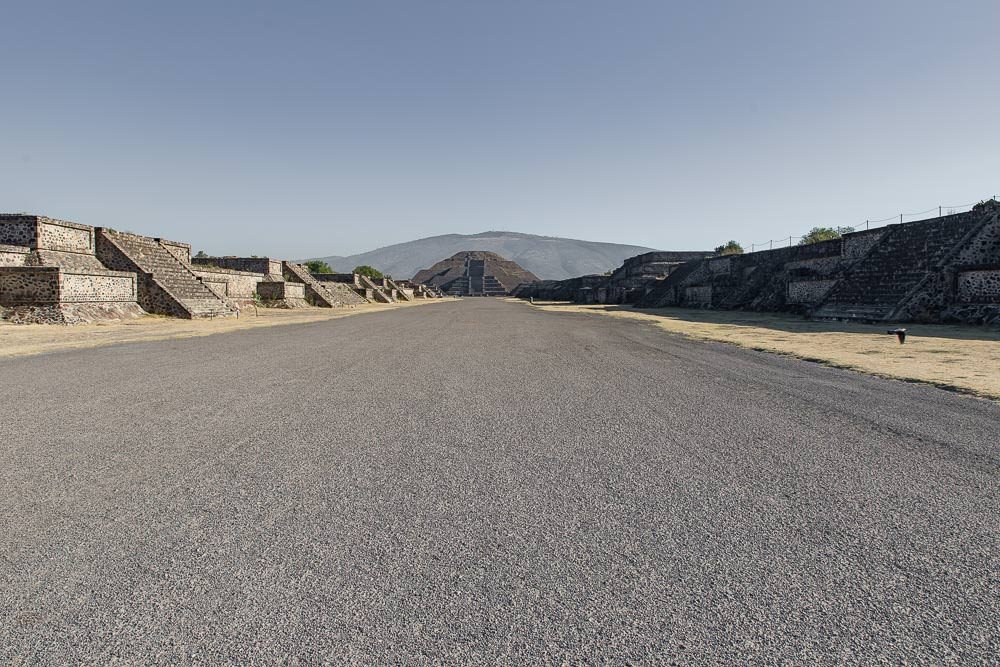 The smaller Temple of the Moon at the end of the Avenue of the Dead.

It was sitting there on the second tallest temple in the remnants of the ancient city of Teotihuacan looking at this view: 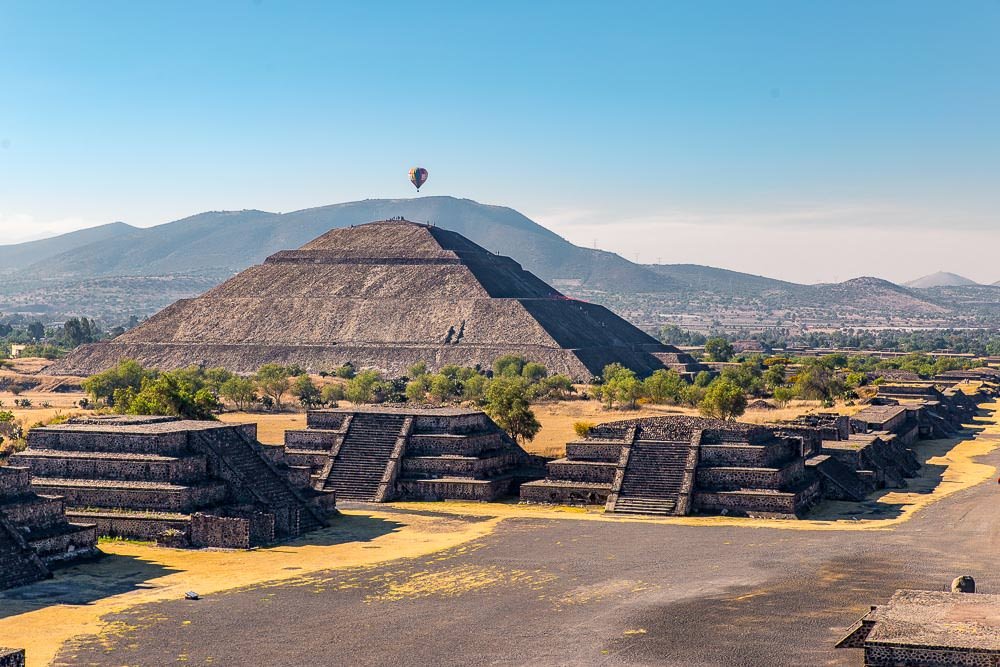 That we got to thinking about how lucky we are.

We might live in our 4Runner—which isn’t a cave—but as houses go it can be a bit small, the rooftop tent can get a bit leaky. It certainly isn’t a palace. Neither the 4Runner or rooftop tent are ideal places to be in a thunderstorm. But with a back yard like this who can complain?

The smaller Temple of the Moon.

Well, actually, we can complain, but only that so you, dear reader, may laugh at our suffering.

On this particular occasion, the story starts with a festival.

In order to visit both Teotihuacan and Mexico City, we were staying at a very nice RV park, not far from the ruins, in the town of San Juan Teotihuacan. 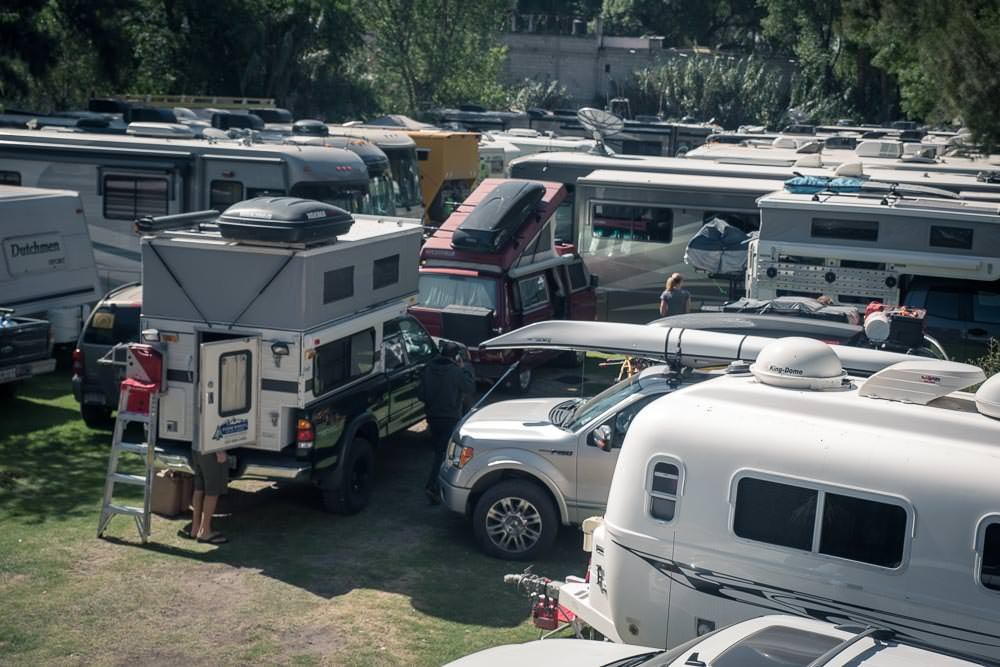 Well, it was a little full when we first arrived.

But it soon emptied out. 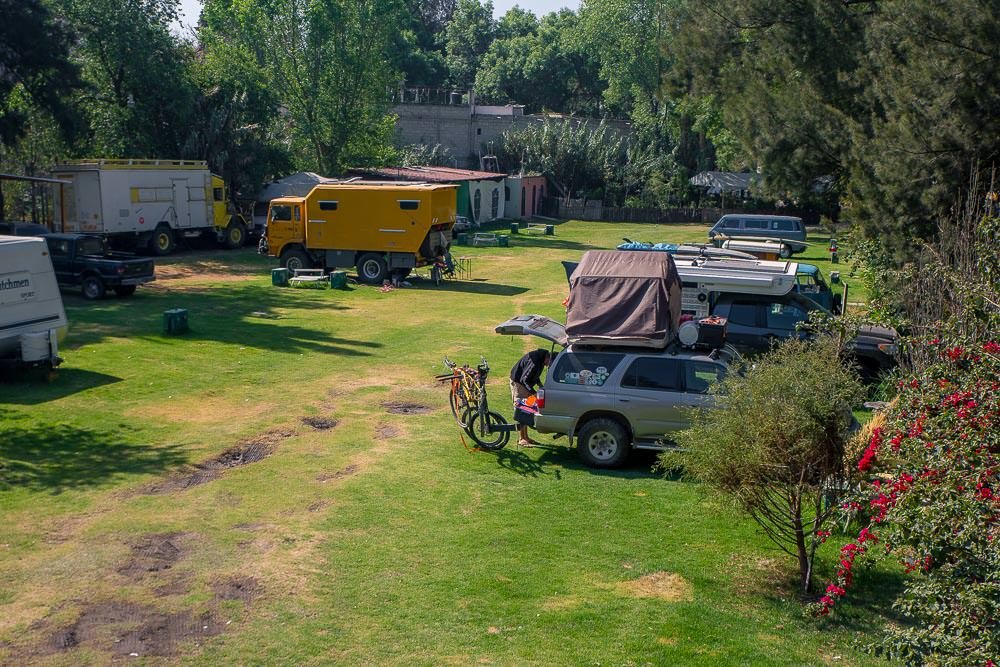 Sometimes we just have that effect on people.

There appeared to be a festival on in town.

There appears to be some sort of festival in town.

It had started when we first arrived in Teotihuacan. Every evening was punctuated by loud explosions. Heralding the apocalypse kind of loud. The earth would shake, our teeth rattled in our skulls and each boom would set off a barking cacophony amongst the travelling dogs at the campsite. (The local dogs were unfazed by all the racket). Each time the celebration was occurring in a different sector of town, getting closer and closer to us. But each night things would tone down as the evening progressed and all would be quiet after 9pm.

One night the procession wandered past the front gates of the RV park. We expected to see the four horseman of the apocalypse thundering past the RV park gates on their terrifying, flame hoofed stallions of doom, stamping out the thundering warning of the coming apocalypse. We were little surprised to see a small, disinterested group with a moderately sized statue and some equally disinterested children. 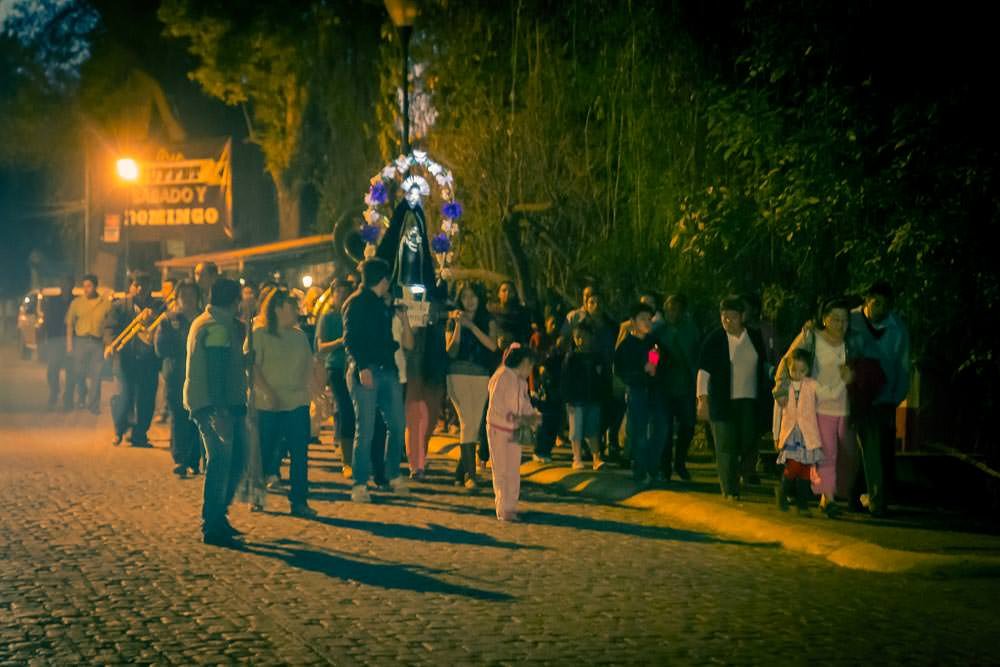 Not as big as it sounded.

We then went to Mexico City for a few days. After a big pork-rind induced bender with Paula and John (Our Bigger Picture) a good night’s sleep was in order. Good thing Teotihuacan is such a peaceful spot. Sleeping was the one and only thing we wanted to do in the entire universe. Even the majestic ancient ruins couldn’t tempt us with their ancient, majestic, ruinousity.

However, the celebration from earlier that week was just reaching it’s cacophonous climax on this particular day. Or rather, night.

Celebrations in Mexico involve fireworks. The fireworks they involve would probably be illegal in most other countries. Some of them sound more like dynamite blasts at a mine. Actually most of them do. Some definitely sound like they are heralding the coming apocalypse.

Every 20 minutes a huge explosion echoed around the campground. The kind of explosions that causes your innards to tangle together in a knot and some involuntary tooth gnashing.

11:00 pm— Shall we just go in to town and see what the fuss is? Nah, it will probably wind down soon.

12:00 pm— Have you seen the ear plugs? Don’t worry, it is probably winding down.

1:00 am —Turns out that the ear plugs are far from sufficient. Are you sure we shouldn’t go into town?

2:00 am— I wish we slept in a hard-sided vehicle rather than a canvas tent, surely that would dull the sound of the explosions a little.

3:00 am— Twenty minutes between each blast is just long enough to start to doze, then be violently re-awoken just as you are at your most relaxed. “Fire, explosions, disaster, apocalypse—oh that’s right, religious festival. Back to sleep.”

4:00 am— Surely this will be winding down soon, not worth getting out of a cozy warm bed to see what the fuss is about.

6:00 am— Well at least the marching band masks the noise of the explosions a little, the noise is a bit more consistent. Wait—is that the church bells?

6:30 am— They’re actually playing La Bamba on the bells. Told you we should have walked in to town in our PJs.

7:30 am— That sun on the tent is getting to be unmanageably hot. Time to get up.

The moral of this story? No matter how tired, miserable and disinterested you are, you should really just get out of your warm bed, put a jacket on over your PJs and go see what people are blowing up. Attempting to sleep during a celebration in a Mexican town is a fight you will lose. Also, tents suck sometimes.

Maybe not this particular palace. 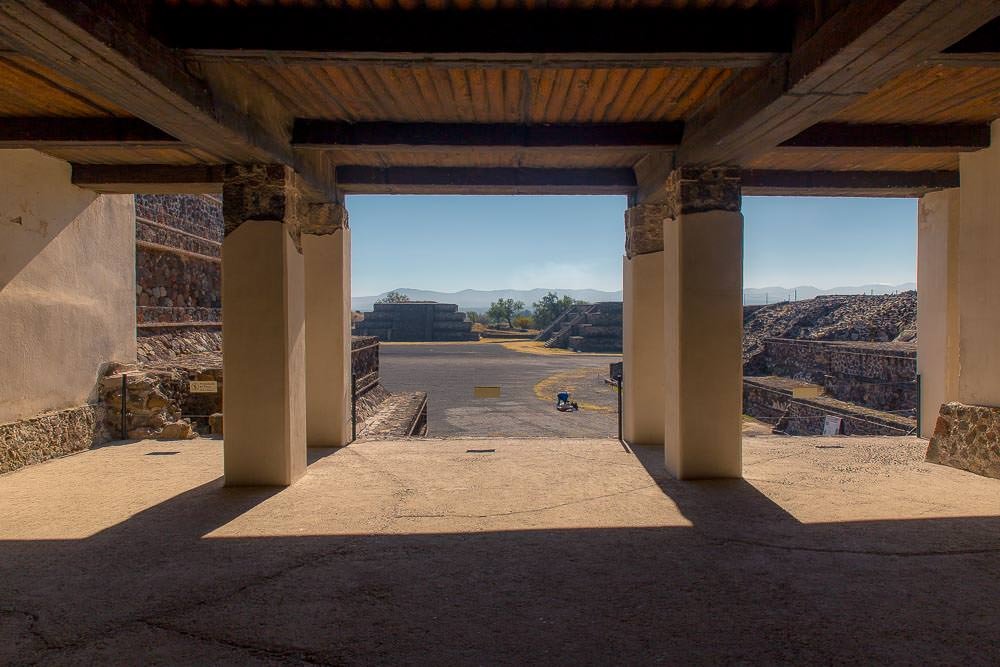 The view from an actual palace in Teotihuacan, not so bad. The walls? Not so sound proof. Also, not technically visible from our campsite…

Some nights we get some sleep, some nights it rains, some nights it freezes inside the tent, other nights it is unbearably hot, mosquitoes sneak in and feast on the soles of our feet (that’s just mean!), or the wind catches the fly and creates a cacophony to rival the best Mexican fiesta, thunder and lightning wake us from peaceful dreams, but we wouldn’t exchange it for anything. Well, maybe a few nice nights in a hotel or an Air BnB. We’ll exchange it for that. But we’re not headed home to our palace* any time soon.

*Just in case you are wondering, no, we don’t have a palace. If we did, do you honestly think we’d be living in our 4Runner?