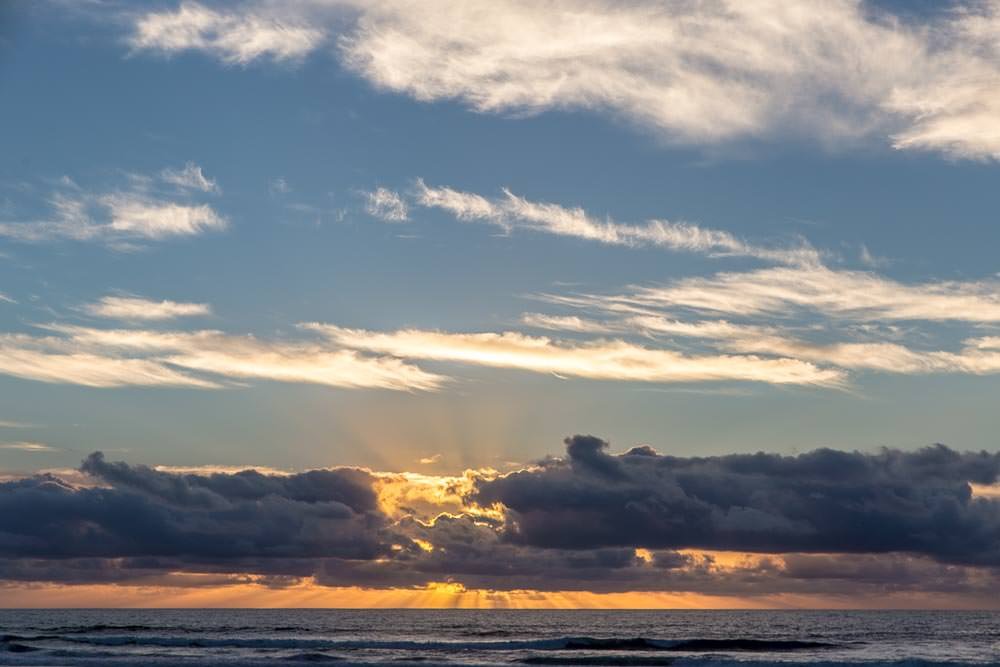 Our final morning in the USA was not off to a great start.

“So. Have you seen the passports?”

Well, the last time either of us remembered seeing them was two days earlier in a hotel room in San Luis Obispo. Several hours drive away, on the other side of Los Angeles.

Several deep breaths later, we had time to calm down from the initial shock of our passports not being in the same place we had been keeping them for the previous five months and started to actually use our brains again.

Luckily the passports were not sitting in a hotel room a long way from where we currently were. They were sitting in the truck, in their new, clever hiding place that had outwitted us both. Even Ben, who had put them there just two days earlier.

We still had a couple of items to shop for, but after an accidentally expensive trip on the toll road we didn’t mean to drive on, we realised that the shops we had wanted to visit were in fact shut. Foiled by one last holiday weekend.

After a bit more of the day was spent using up our bag of small change in the self check-outs in Walmart. (It takes a long time to feed enough pennies into the checkout to buy a stove top toaster, just for the record). We finally felt ready to cross the border. We probably weren’t, but we did anyway. 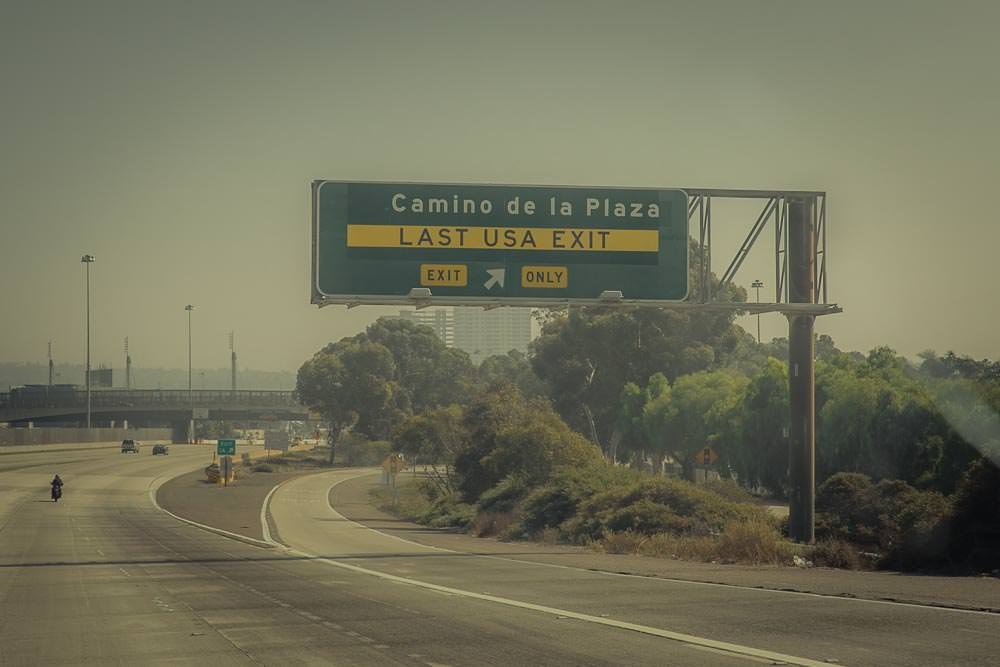 It was as we drove through into Tijuana that we realised that we had been so focused on leaving the USA that we had completely forgotten to plan for Mexico. Our data plan had expired on our phone, but fortunately, before we had left the campground that morning we had looked up the location of an RV park we could stay at that evening. But that was about it.

We had driven through the border without any trouble. Except for the fact that Emma was sure we needed to get our passports stamped or something. Ben was sure that they would have stopped us if we did, so he just followed the other traffic and kept driving—despite the increasingly urgent squeaks of disapproval from Emma. It wasn’t until after several minutes of searching, Emma found the information to prove that a tourist card was required for any stay of longer than 72 hours or travel south of Ensenada. Given the distance between us and Guatemala, we felt this would probably be handy.

We hadn’t seen the immigration building on the way through, but decided to drive back and try to find someone to ask for directions. Our first mistake was asking Javier, our GPS, for directions back to the border. Before we knew it, we had taken a wrong turn, ended up wedged in a queue of traffic headed for the US border. Oh well, might was well go around again… The US border guard just laughed and waved us through when we told him we hadn’t really meant to come back to the US, but really just wanted a Mexican tourist card.

As we drove into Mexico for the second time in one day, we asked the Mexican border guard where we could get our tourist card, he directed us to a nondescript window in a building hidden behind some large concrete temporary walls. Well, I can’t imagine how we missed that the first time.

Tourist cards in hand, we didn’t really have time to celebrate that triumph. The day was nearly over, we only had US currency, hadn’t bought a SIM card for our phone, had no maps, Javier wasn’t very well informed about the area and we still had a fair way to drive until we got the the RV Park we were hoping to stay at. The only information we had on where to find the RV park was that it was at KM 70 of the toll road, but that seemed like plenty to go on. 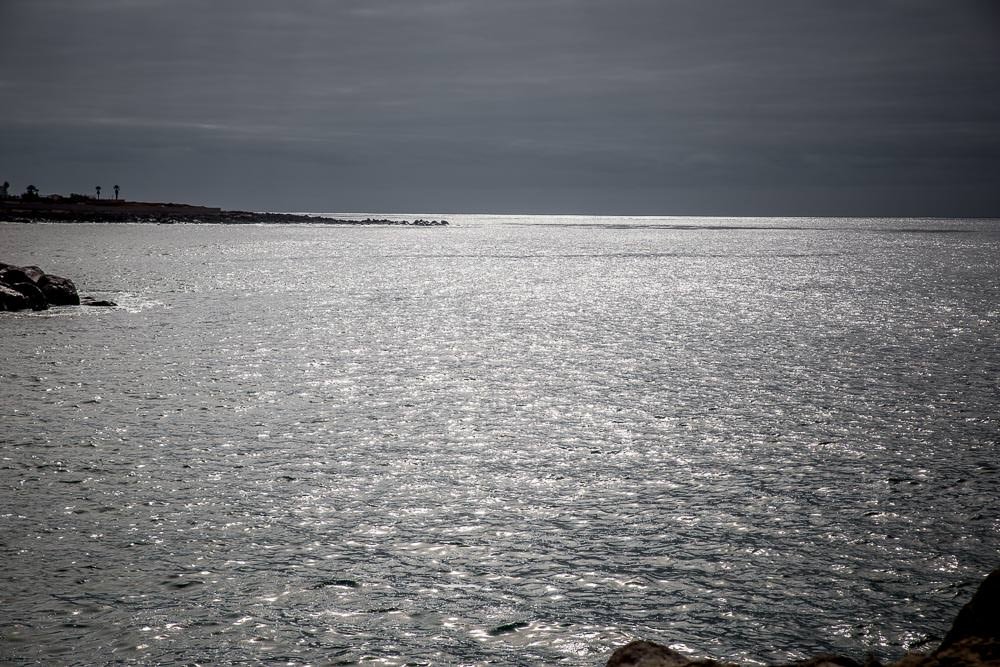 The free road (libre) ran alongside the toll road (cuota) most of the way. We kept looking forlornly at the free option as we drove through the toll booths—why were we paying to drive to the same places we could be driving for free? But our lack of maps, combined with the slowly sinking sun meant we opted to stay on the cuota. Until suddenly at KM67 the toll road was shut. Directed onto the libre, we felt certain that we would end up passing the RV park anyway. The two roads had been following a frustratingly parallel path all the way down, but unexpectedly, as we were evicted onto the Libre, the two roads diverged drastically. We were on our way to Ensenada away from the coast, away from the RV park. The sun was low in the sky, we were tired, frustrated and Javier had no ideas.

After crossing a river, but before we drove around the wrong side of a hill that would separate us from the coast, we chose a nondescript looking dirt road that appeared to follow the river back to the coast. The sun was low in the sky, we couldn’t really see where we were going, but it seemed like the right kind of direction. We wound our way back to the coast and with the magical power of guesswork managed to arrive right at the gates of the RV park. 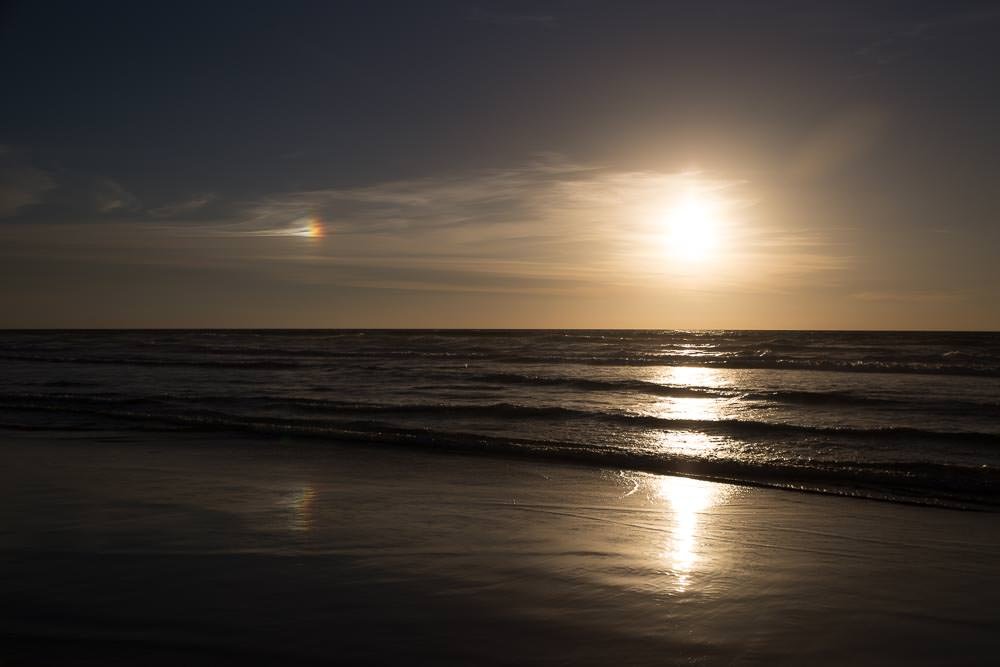 All the RV’s were parked in a nice, well-manicured area. We paid a little less and parked by ourselves in the middle of a vast, sandy lot, wedged between the ocean and the highway. We felt rather conspicuous and alone as we shared this huge area with only with a rubbish skip, a tyre full of burning rubbish and the sad-looking remnants of a palapa.

That was how we spent our 180th day on the road. It was lucky we had pre-emptively celebrated six months of travel at several breweries in the USA, because today hadn’t been a success. We still had no pesos, we still hadn’t eaten any Mexican food, we still had no maps, no SIM card, no beer and all we had seen of Mexico was some toll booths, the immigration building and the views we had glimpsed from the cuota on the way in. As far as we could tell there were no shops or restaurants, or indeed much of anything in the immediate area. Just empty, fancy, mansions—holiday homes for folk who could afford classier accommodation than a rooftop tent in a sandy lot by the highway. 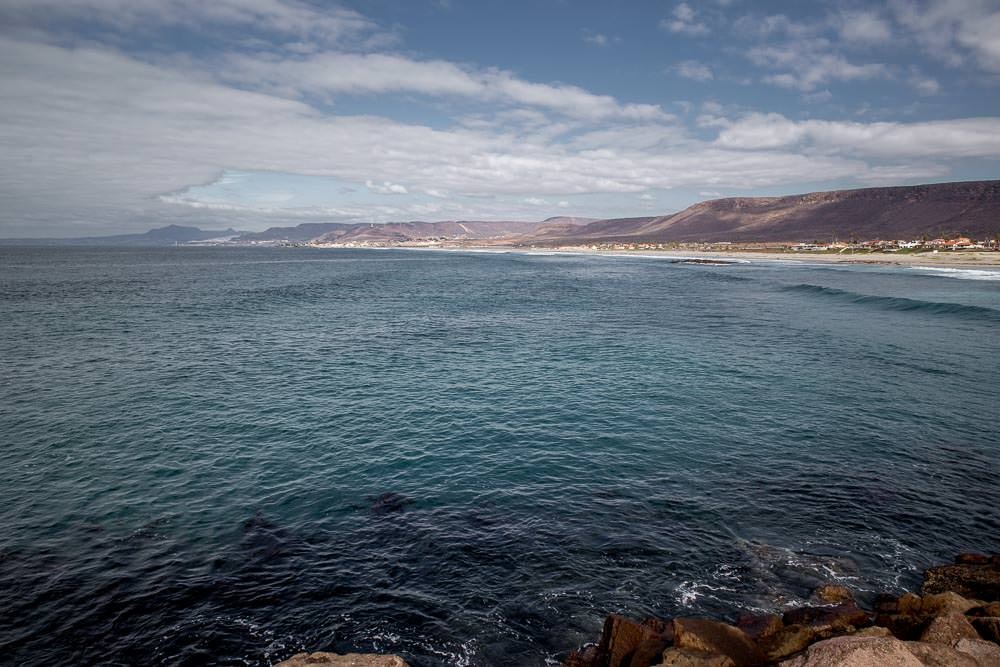 Determined to do Mexico right the next day, we planned a day trip to Ensenada. When I say ‘planned’ I obviously use that term loosely as thus far, you can probably tell, planning was not a strong feature of our trip to Mexico.

The next day in Ensenada we withdrew some pesos, bought some beer, ordered some delicious street-cart ceviche, organised a SIM card and data plan, decided maps were over-rated and all was again, right with the world. 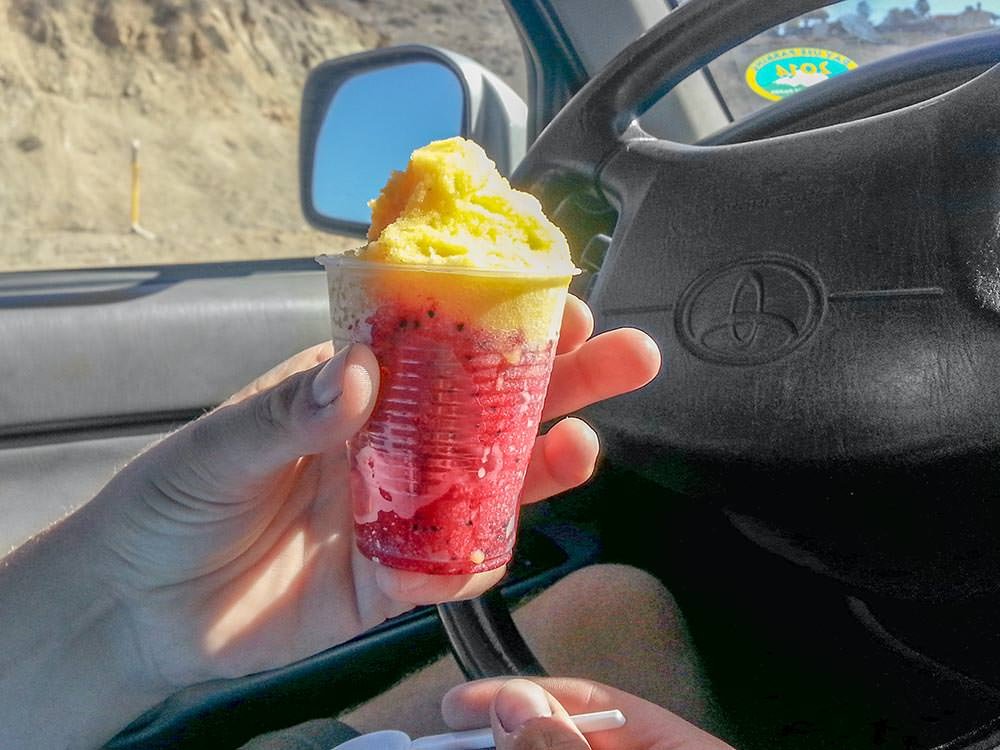 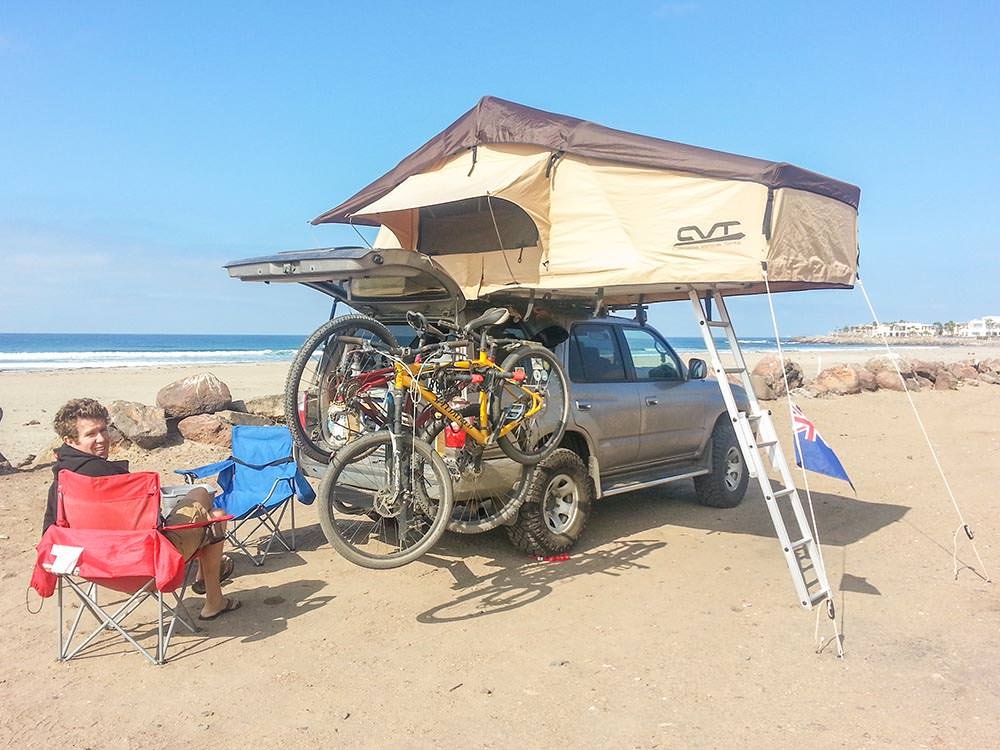 From the right angle, the camp spot looks pretty sweet, what you can’t see is the skip full of rubbish, or the flaming tyre. It is all about perspective right?

As we returned to our dusty campsite we were greeted with the first of many spectacular Baja sunsets. We cracked open a beer as we watched the pelicans swoop in formation back along the waves and the sun dipped below the horizon. There we were, camping on the beach in Mexico—what a way to celebrate six months and one day on the road! 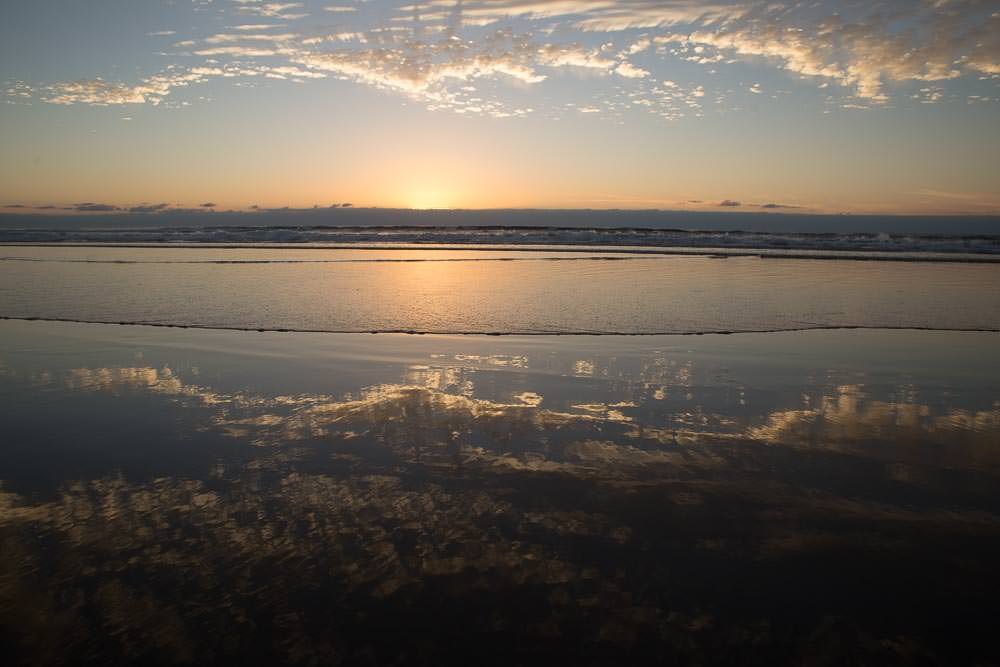