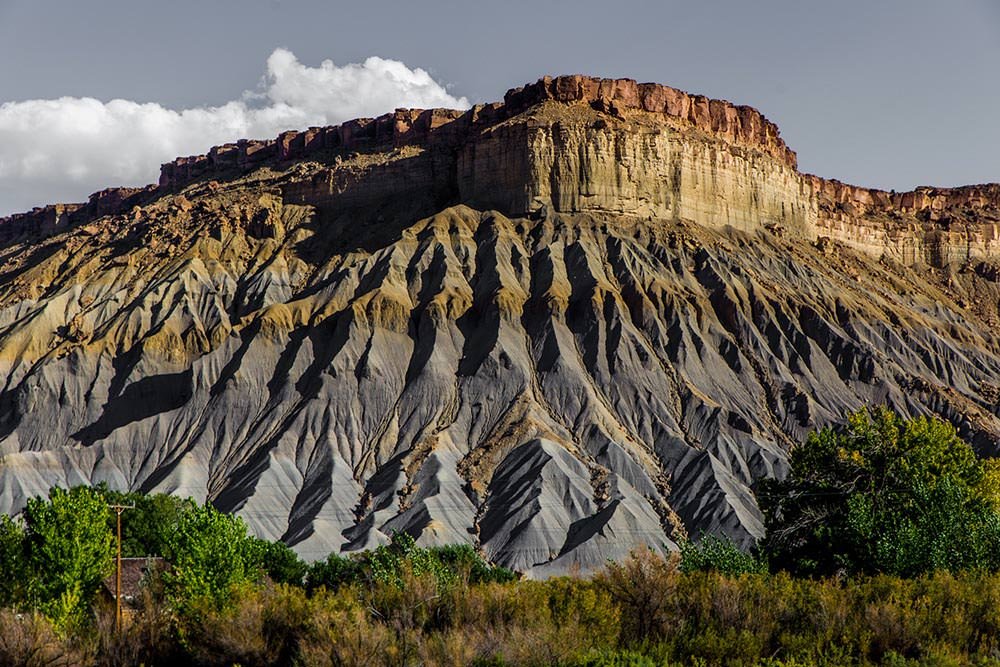 We formulated ‘Plan B’ when a couple we spoke to in Kodachrome Basin State Park motivated us to pay a visit to Capitol Reef National Monument. A quick look at a map showed an enticing looking road heading south through there, so we decided that would be the best route to take.

By the time we arrived at the ranger station in Capitol Reef however, a thunderstorm warning was in effect. Heavy rain was predicted for the next few days. Not ideal.

We chatted briefly to a park ranger about our plans, but were pretty confident that she would advise us against it in light of the predicted storms—and advise against she did.

She said, sure, we could drive it, but most of the road was at the bottom of a wash, so we’d probably be stuck there for a few days. Also, the only camping option en route was on an exposed hill-top (Not where you want to be camping in a roof-top tent during a thunderstorm). To be honest, we’d had our fill of rain in Alaska and Canada, so were happy to head somewhere drier.

Just in case we weren’t convinced she detailed the astronomical cost of having a vehicle towed out of said danger. We took her recommendation of a nice, relaxing trip around the roads in the immediate area accompanied by a few short walks. She also suggested coming back later to explore the back roads.

So we made the most of our short visit to Capitol Reef:

And left enough time to head East out of the path of the impending storm.

As we left the area, the clouds were gathering. 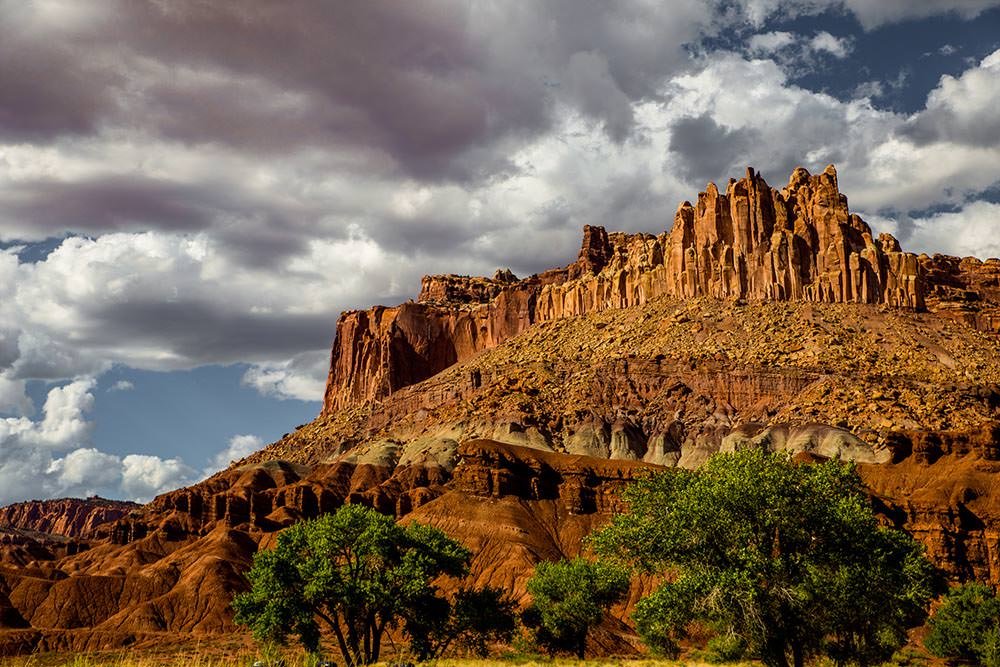 So we pointed our nose south and made for clearer skies in the Glen Canyon: 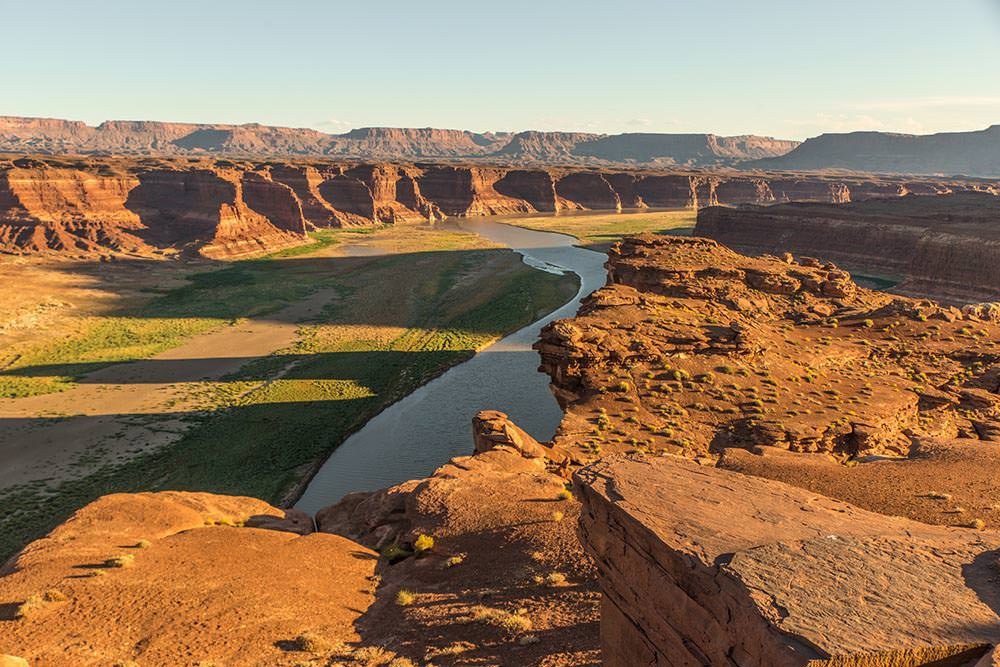 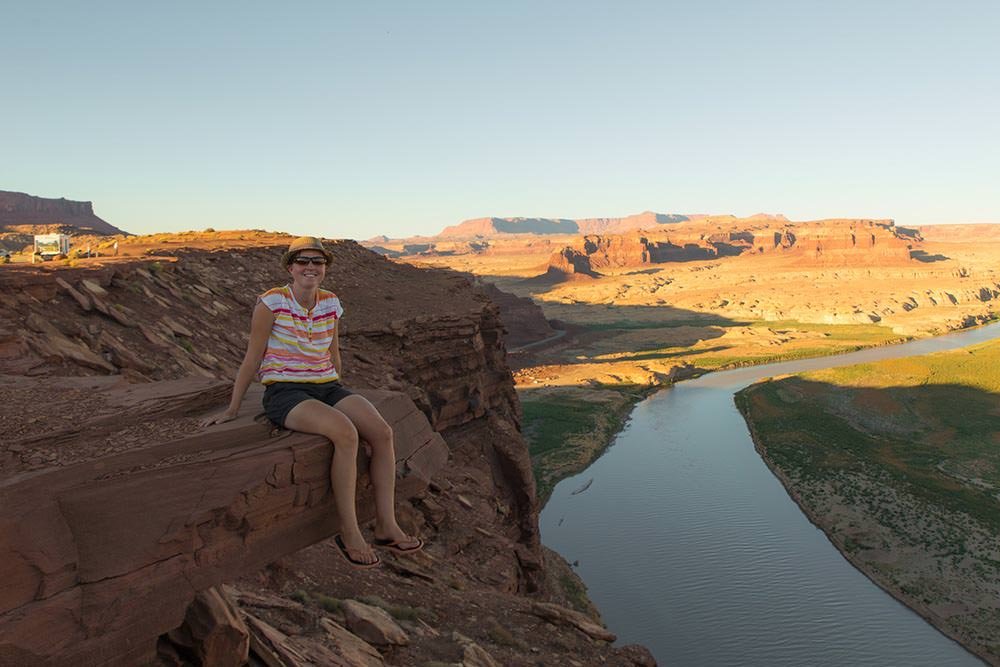 Where, after finding a pretty amazing camp spot, we settled in for the night. 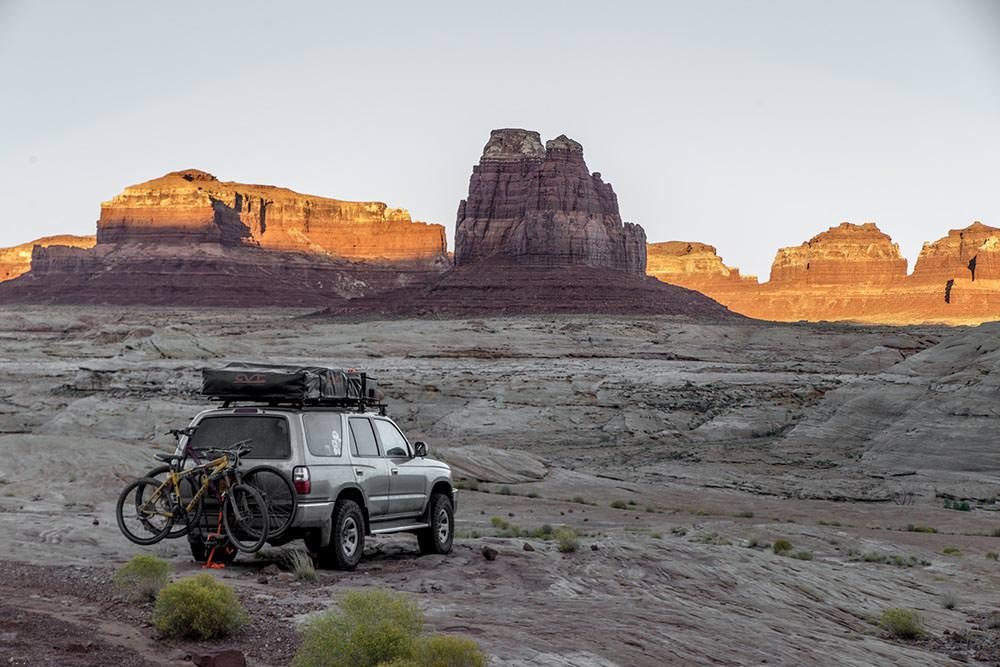 We awoke the next morning to find ourselves right on the edge of the storm we had tried so hard to avoid, which made for a pretty spectacular sunrise: 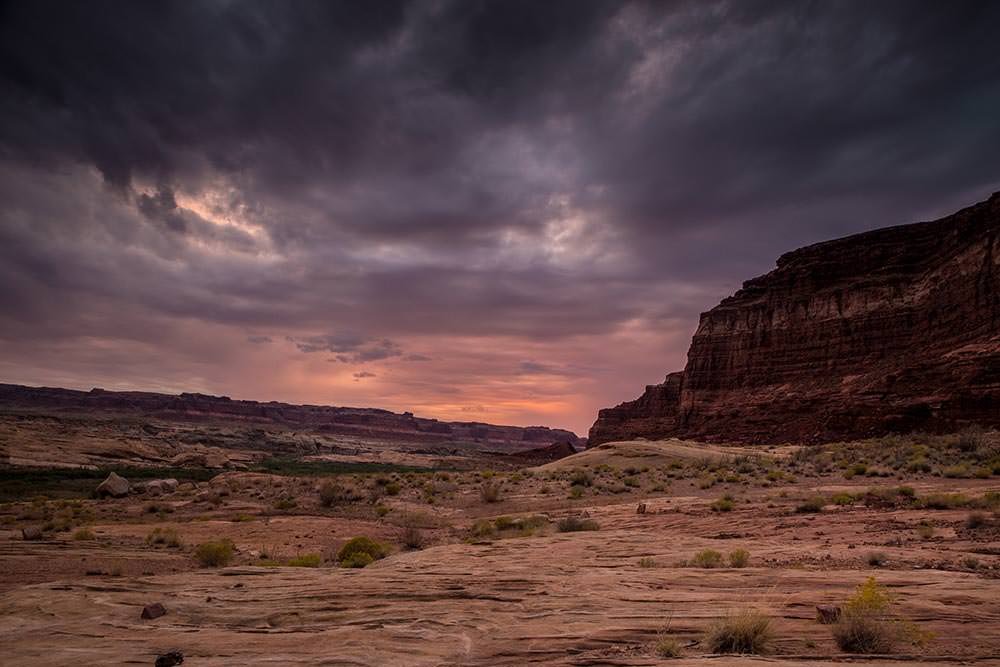 This is seriously what we saw while we drank our morning cup of coffee. Sweet.

This one is worth clicking to view a little larger…

We took a morning jaunt to explore the rock bridges of the nearby Natural Bridges National Monument: 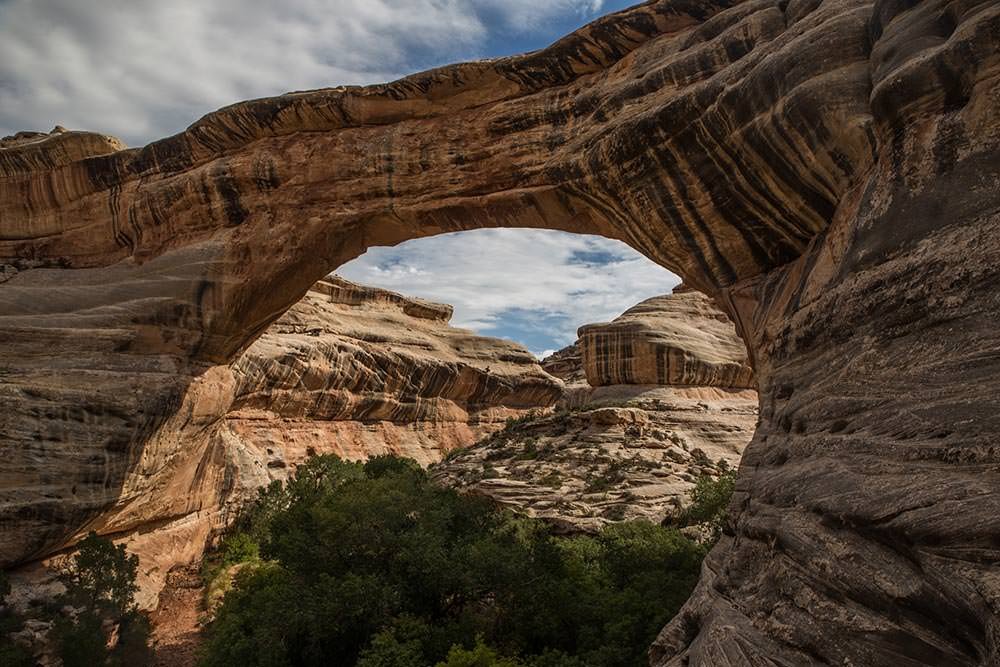 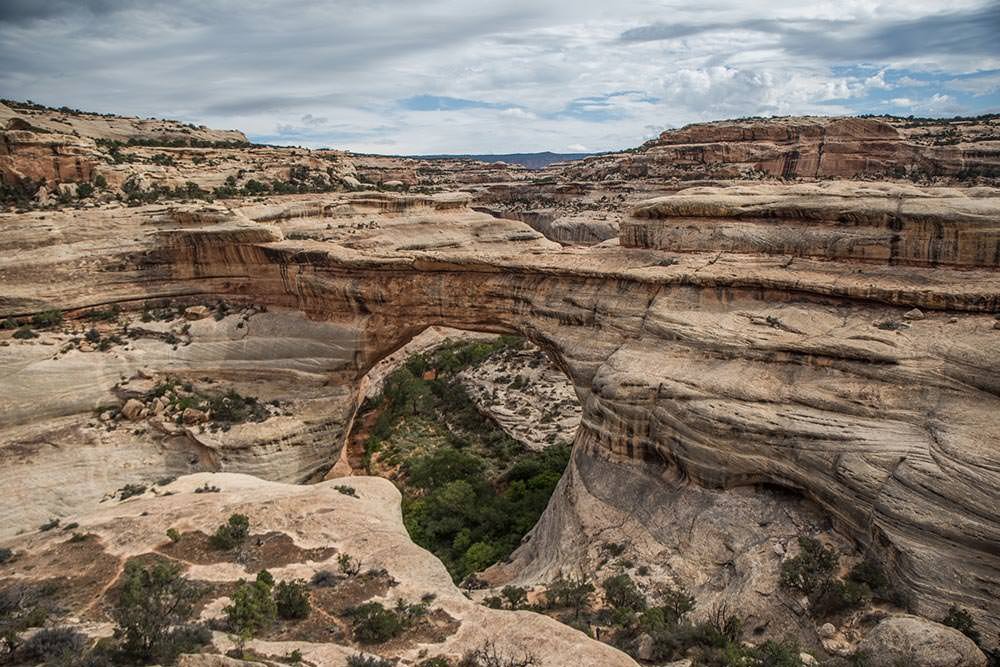 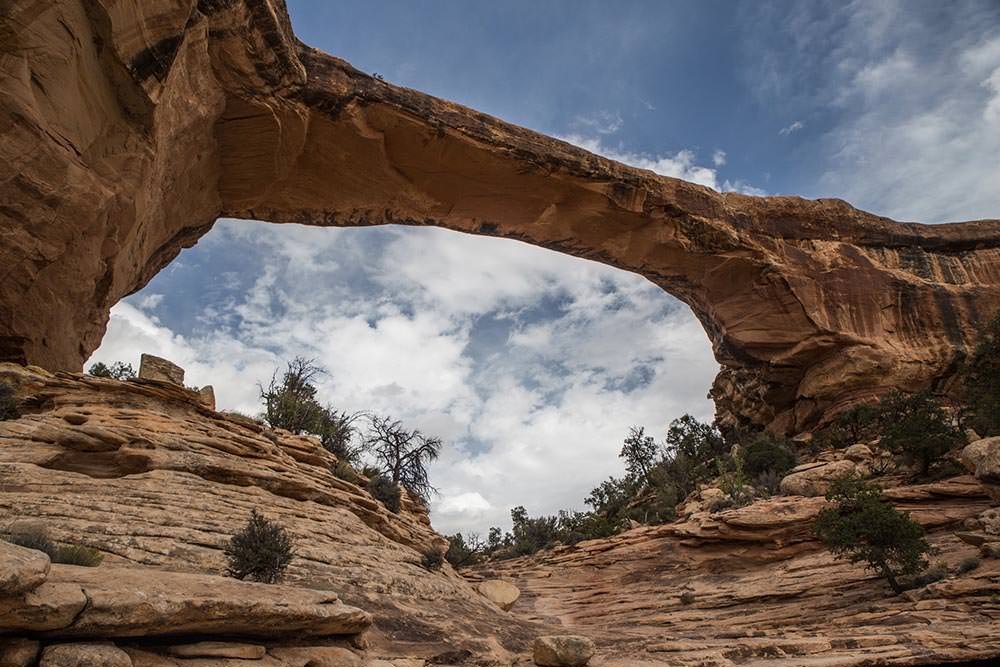 Fancy that. This too is a natural rock bridge. It seems this National Monument was aptly named.

Although the notices up at the ranger station didn’t encourage us to linger too long. 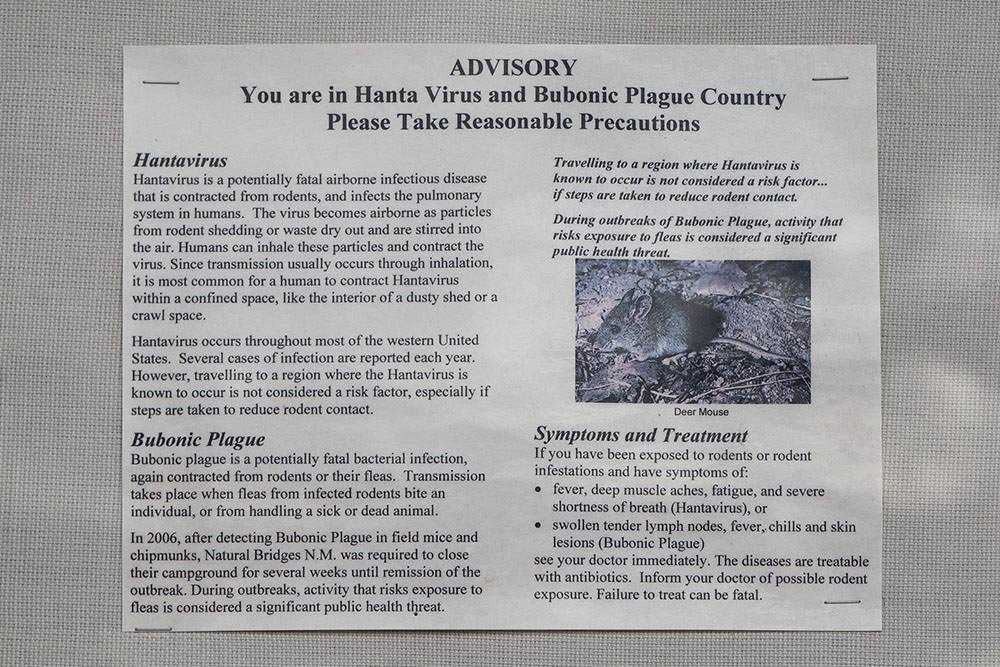 Yes, that’s right, the actual Bubonic Plague. You know, the one from Medieval times with all that “Bring out your dead” business from Monty Python.

Despite sounding like a delightful place to camp, we made the spontaneous decision to head back east. Briefly.

We had previously missed most of Zion National Park, the North Rim of the Grand Canyon and entering the draw for tickets to explore ‘The Wave‘.* It seemed like a good choice to take a detour back that way through Monument Valley. Which was coincidentally straight back through the tail end of the storm we had thus far avoided. It was a day of eyeball-popping scenery that we have covered separately in its very own blog post, because, well, let’s face it—It was pretty spectacular. 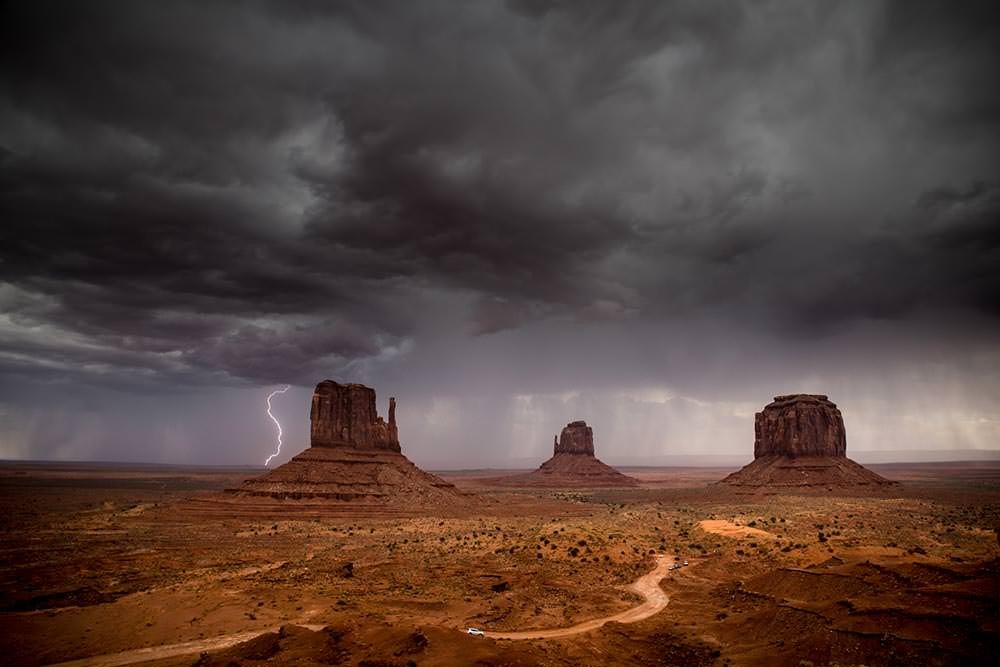 Unfortunately we were not successful in our attempt to get tickets for ‘The Wave’ and got distracted driving around, ended up missing out on the North Rim of the Grand Canyon and Zion National Park. This, combined with the realisation that time was running short on our US Visas, meant we found ourselves returning through the Glen Canyon area only a couple of days after we were there the first time, this time heading north to Moab. (This is what happens to people with short attentions spans who are travelling without a plan).

By the time we arrived in Moab, we had been exploring the surreal landscapes of Utah (plus a quick detour to Arizona’s Monument Valley) for over a month. As a result, we have to admit that we didn’t really get into the spirit of exploring Canyonlands or Arches National Parks.

Yet again, we were foiled by storm-induced road closures and some of the exciting sounding back roads we wanted to explore were temporarily shut due to wash-outs. We contented ourselves with a quiet afternoon looking at even more canyons:

We made the mistake of visiting Arches at sunset. The experience was like trying to buy a last-minute gift at 8pm on Christmas Eve. Every arch we saw was obscured by swarms of people, all trying to get their definitive sunset photo with a rock arch. We nearly didn’t bother getting our cameras out, but then relented and took a snap of this ‘not an arch’ that nobody seemed particularly interested in: 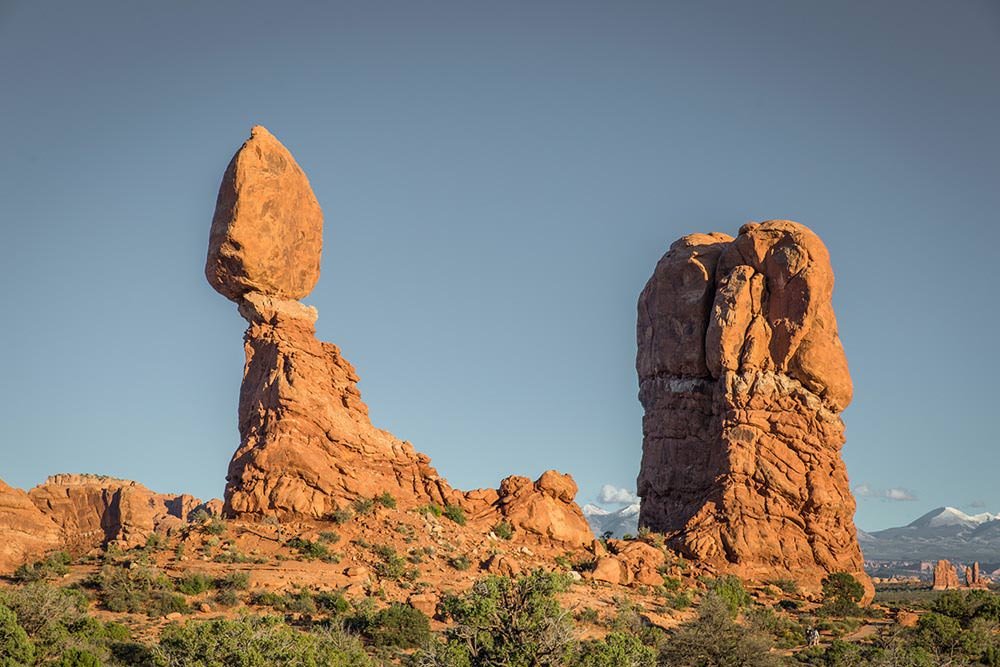 Having clearly reached scenery overload, we found ourselves sitting in a craft brewery in Moab. This is where we learnt that Utah is indeed another planet. Or at least it is when it comes to ordering a beer.

We made our usual craft brewery order of “A taster of everything you have, please”. The waitress looked at us in dismay.

“I’m sorry. You can try all our beers, that’s fine” she said looking seriously apologetic. “But you can’t order them all at once.”

“Just two at once. Then once you’ve had those, then you can order another two. I’m sorry.”

(If we gave that waitress $1 for every time she said ‘sorry’ she would have received a truly hefty tip. Instead we just stuck to the usual percentage…)

“No worries. We’ll have the first two.”

“Can we order the next two on the menu”

“You can. I’m sorry. Just to let you know that because they are tap pours they have to be under 3% alcohol, so the tap versions are toned down. If you want to order a bottle, we can open that at the table, then you can have the full strength beer. I’m sorry. Utah is weird.”

“We’ll just start with the tap pours. Can we buy the bottles to go?”

“I’m sorry, you can but you can’t buy them from me. You have to buy that from the brew shop next door. I’m sorry. I’m only allowed to sell the ones I open at the table. Here’s a voucher for the shop though.”

We finally made our way through the beer list. None of it was stellar, we eventually opted not to leave with any bottles of beer, it just seemed too complicated.

Befuddled by the sheer complexity of the alcohol laws, the other-worldly landscapes and the unpredictable weather of Utah. We felt it was time for Colorado. With one last stop to eyeball some dinosaurs on the way out of this crazy, crazy state: 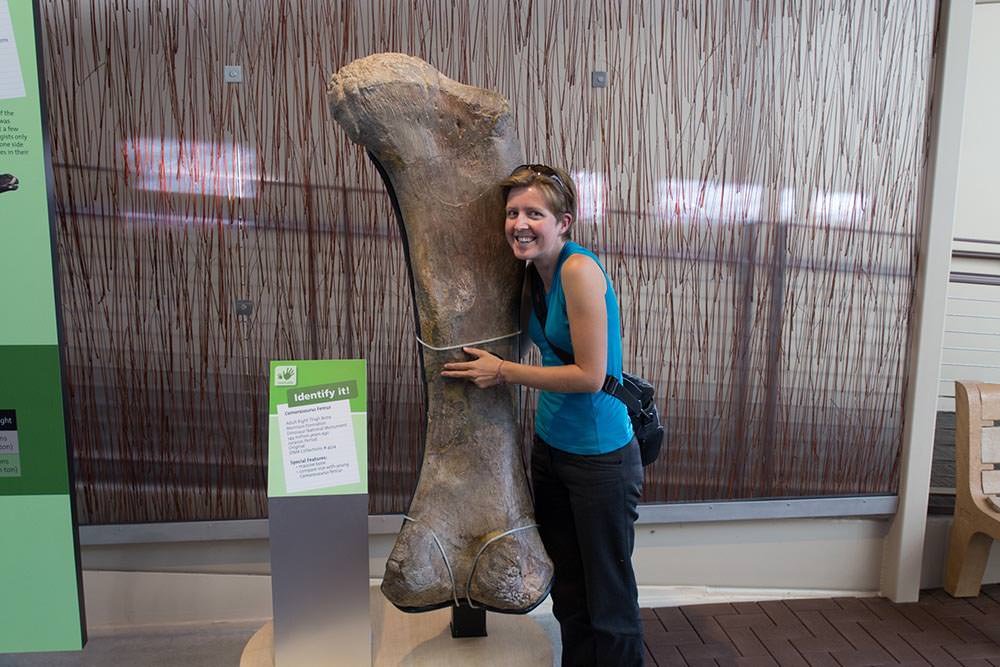 Great day for Emma. She got to hug a dinosaur leg. 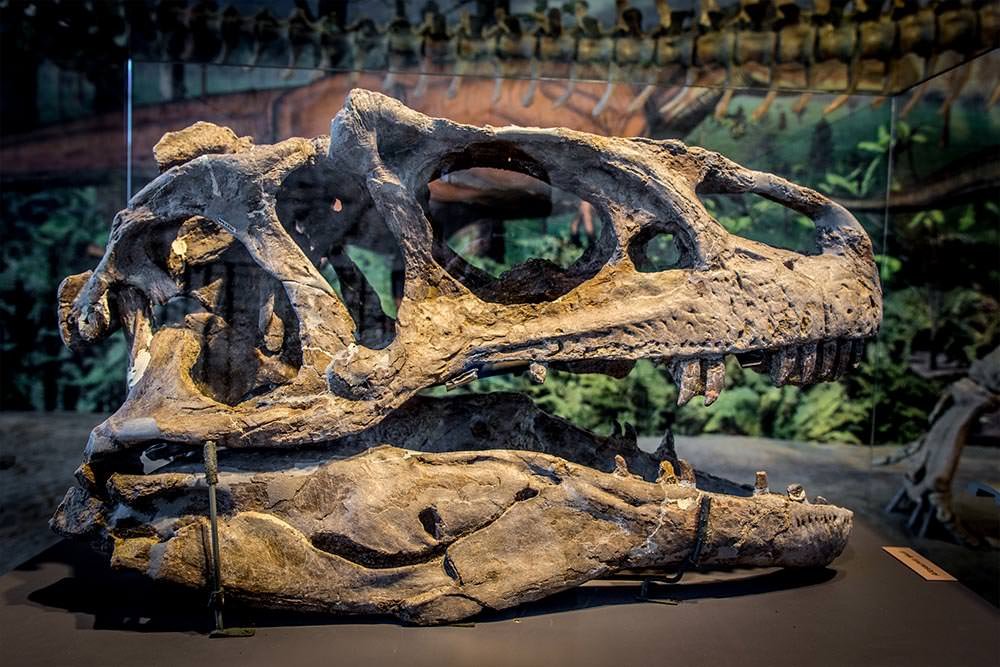 I can only assume that an Allosaurus such as this would be incredibly friendly if you met him in person. Pretty sure it would be like having a giant chompy puppy. 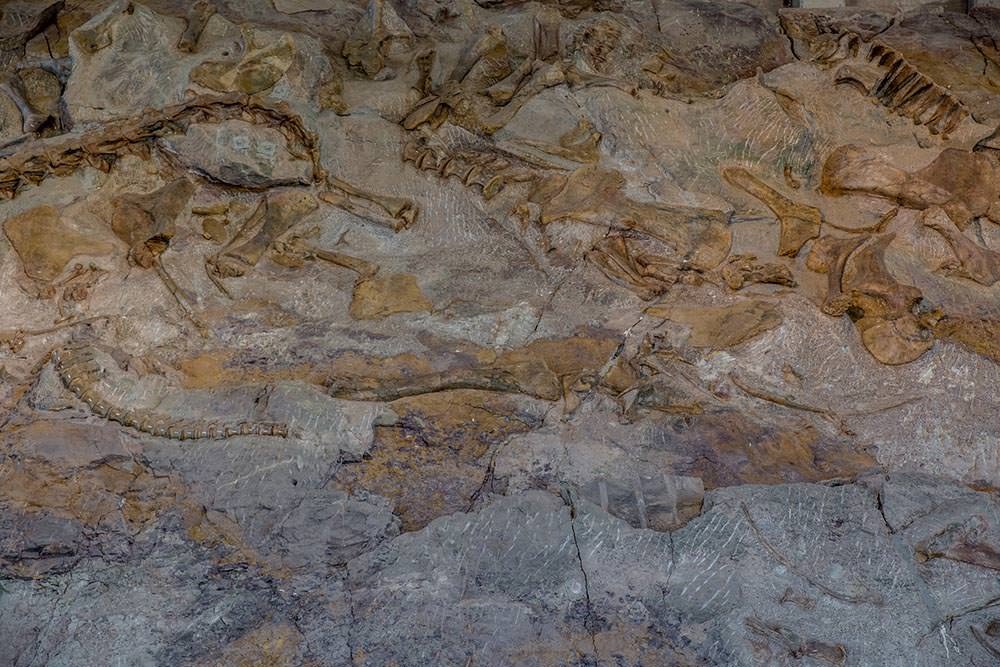 Yes. That photo is of a section of solid cliff face full of dinosaur fossils. We told you Utah was another planet!

* It is an actual lottery, to go look at rocks—I’m not even kidding a little. Everyone who is interested in going on a walk around the rocks arrives at the ‘lottery office’ bright and early on the morning the day before they want to go wandering. Each group then fills in a form and sits around and waits in an awkward silence, their hearts pounding with anticipation—while numbers are drawn out of a bingo cage. Our numbers we not drawn, so we did not see the rocks. According to photos we have seen, they are pretty spectacular.

Told you Utah was weird.