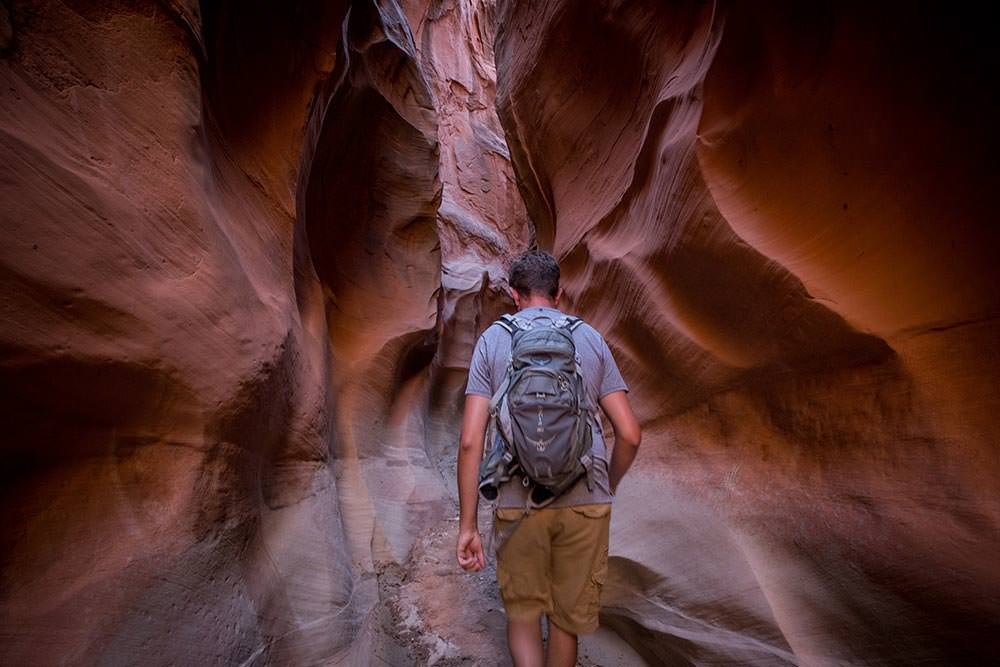 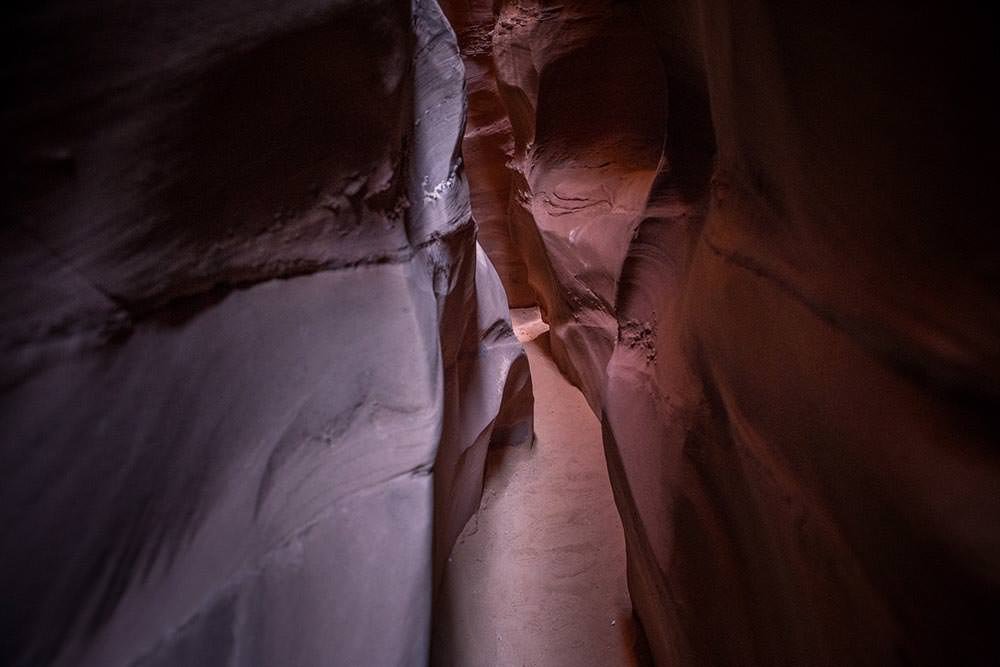 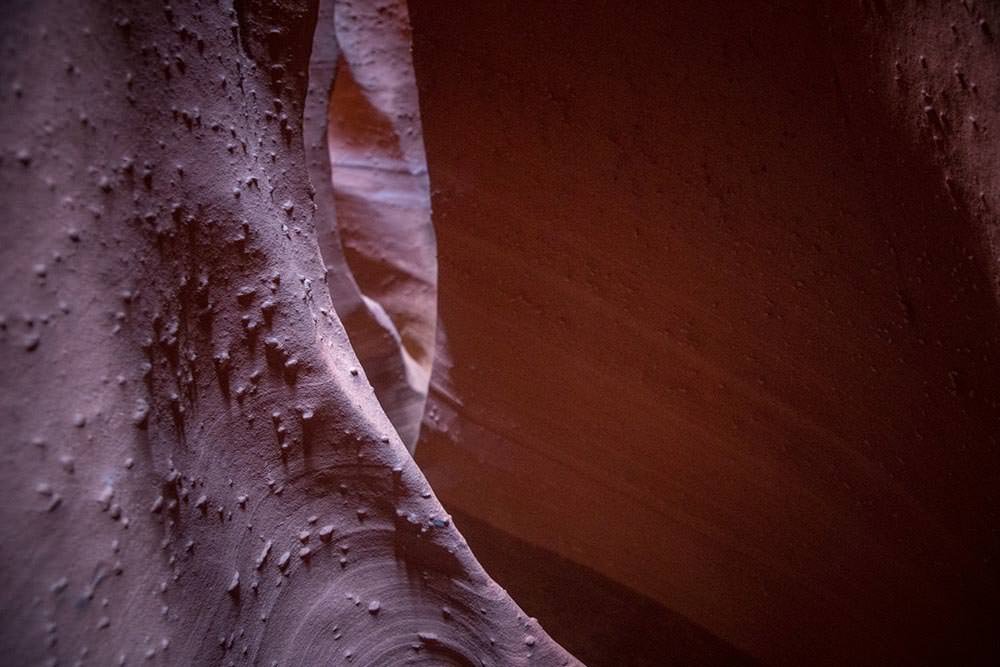 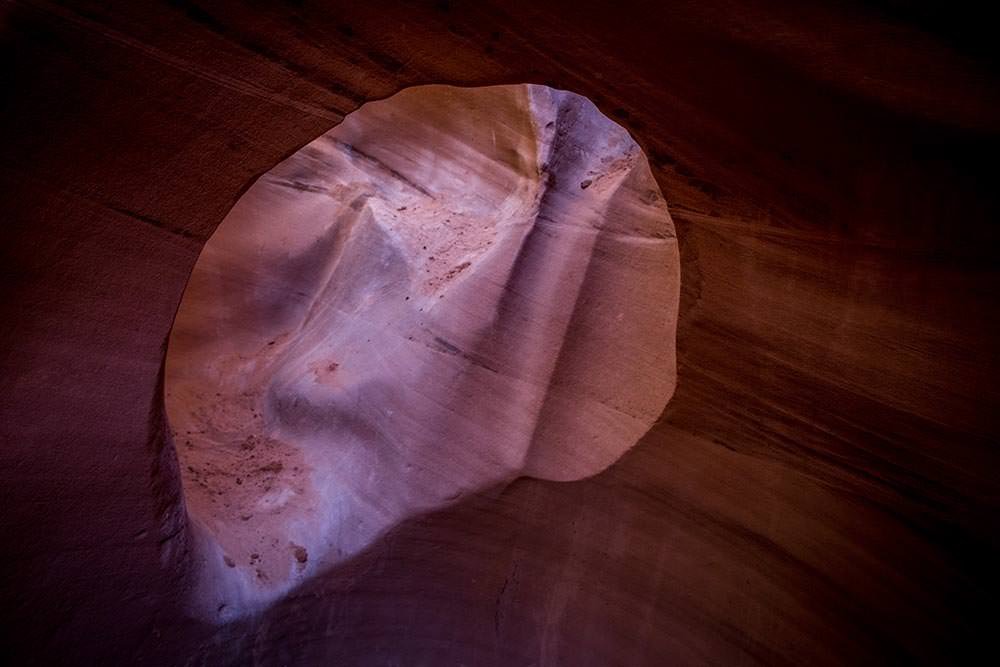 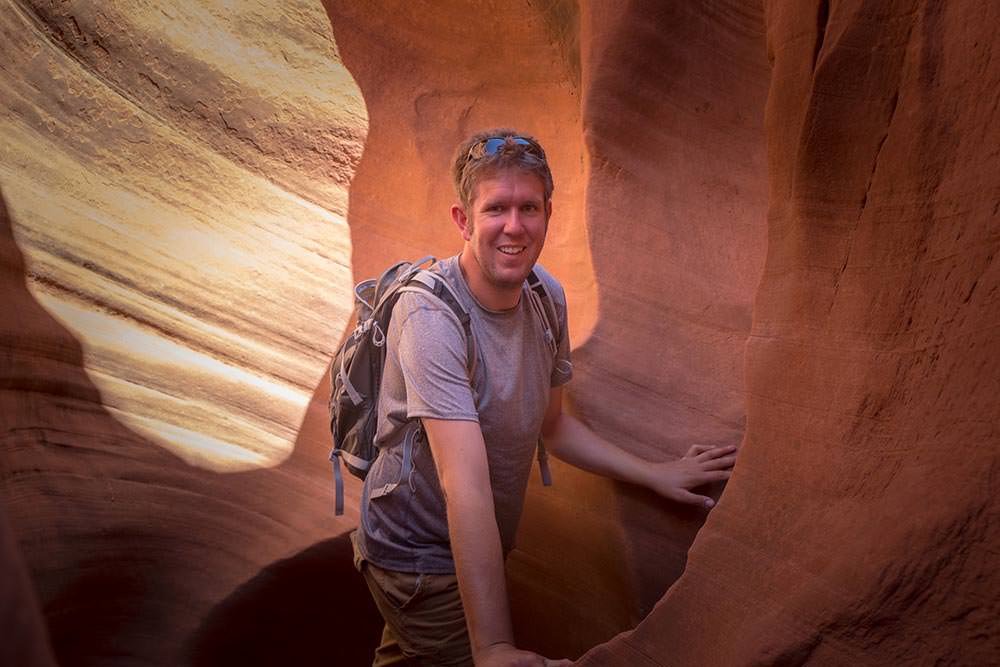 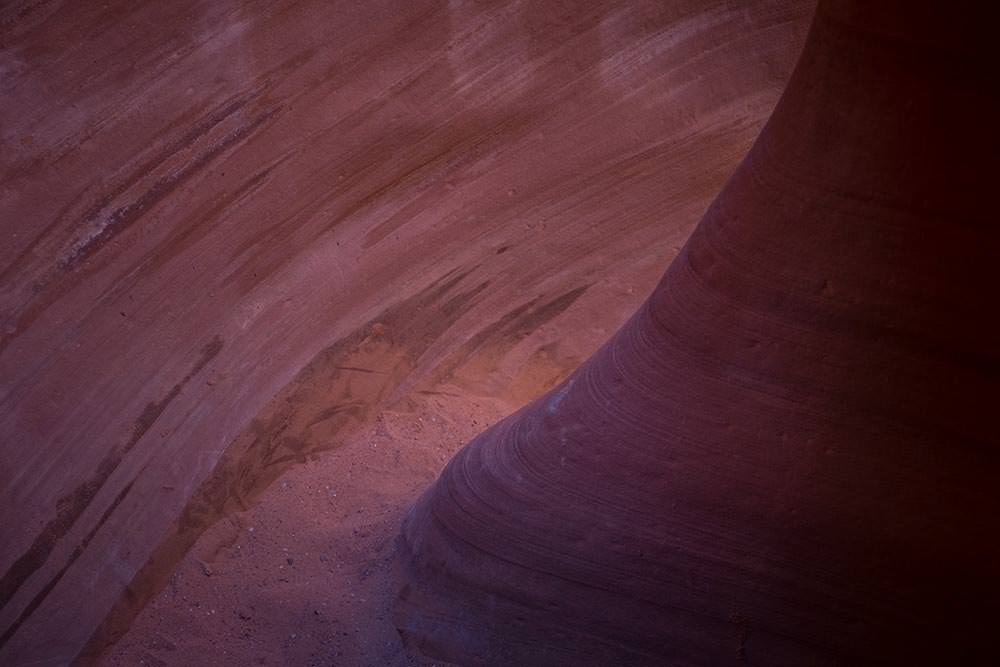 Still not convinced that the landscapes of Utah would be more at home on another planet? Take a look at the slot canyons of Grand Staircase—Escalante National Monument.

These are deep, narrow canyons carved into sculptural forms by flood waters as they sweep through the canyons after heavy rainfall.

In our attempt to explore some of these canyons we, yet again, followed the vague instructions of a local, combined with a map of questionable authenticity. Boldly armed with this paucity of information we struck out to explore the slot canyons of the Dry Fork of Coyote Gulch. 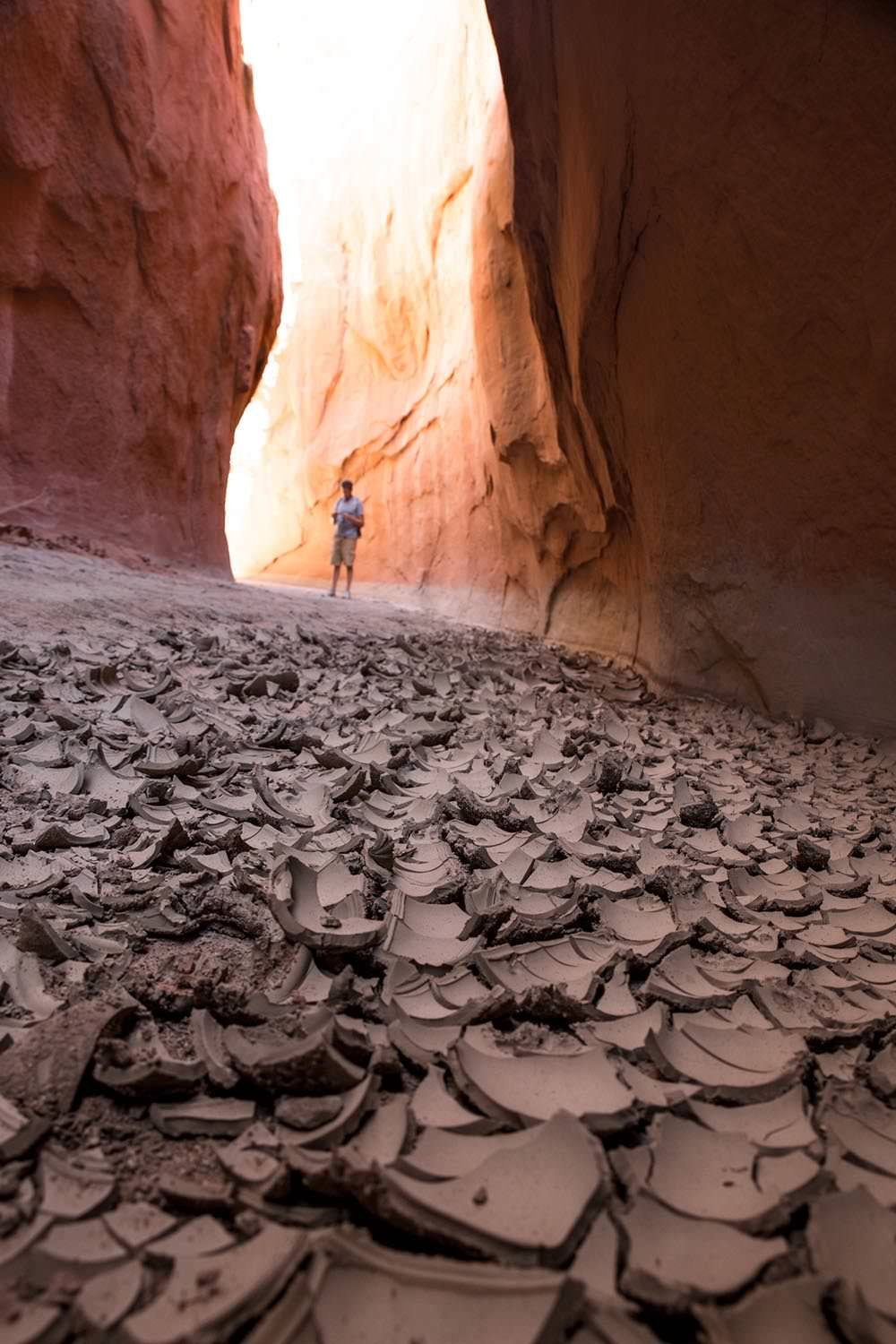 Our first stop was a narrow section of Dry Fork which was marked as a separate slot canyon on our map. After wandering around for a bit, we agreed it was impressive, but wanted to explore the more exciting sounding Peek-a-boo slot canyon.

After several failed attempts to find the supposed trail between two points in both canyons, we realised that a) Our map was far from being to any kind of sensible scale and b) We had wandered far further along the canyon than intended.

Defeated, we opted to head back to the easy to find lower entrance to Peek-a-boo slot canyon.

After an undignified scramble up the smooth rock entrance to the canyon, we were greeted with two deep pools of water. Yes, we suppose it had rained a lot lately. A traveller from Germany was just giving up and turning around as we arrived. The general consensus was that no one knew how deep the pools were so didn’t really want to drop into the well-like holes in case they were hard to get out of.

With the water successfully navigated (and Emma’s feet still dry, due to some elaborate jumping and catching manoeuvres) we were free to explore the rest of the canyon. Which was, as advertised, spectacular and a whole lot of fun:

From there we made for the narrow confines of Spooky Canyon for our last slot canyon of the day. Before our water ran out and the hot desert sun chased us back to our vehicle. 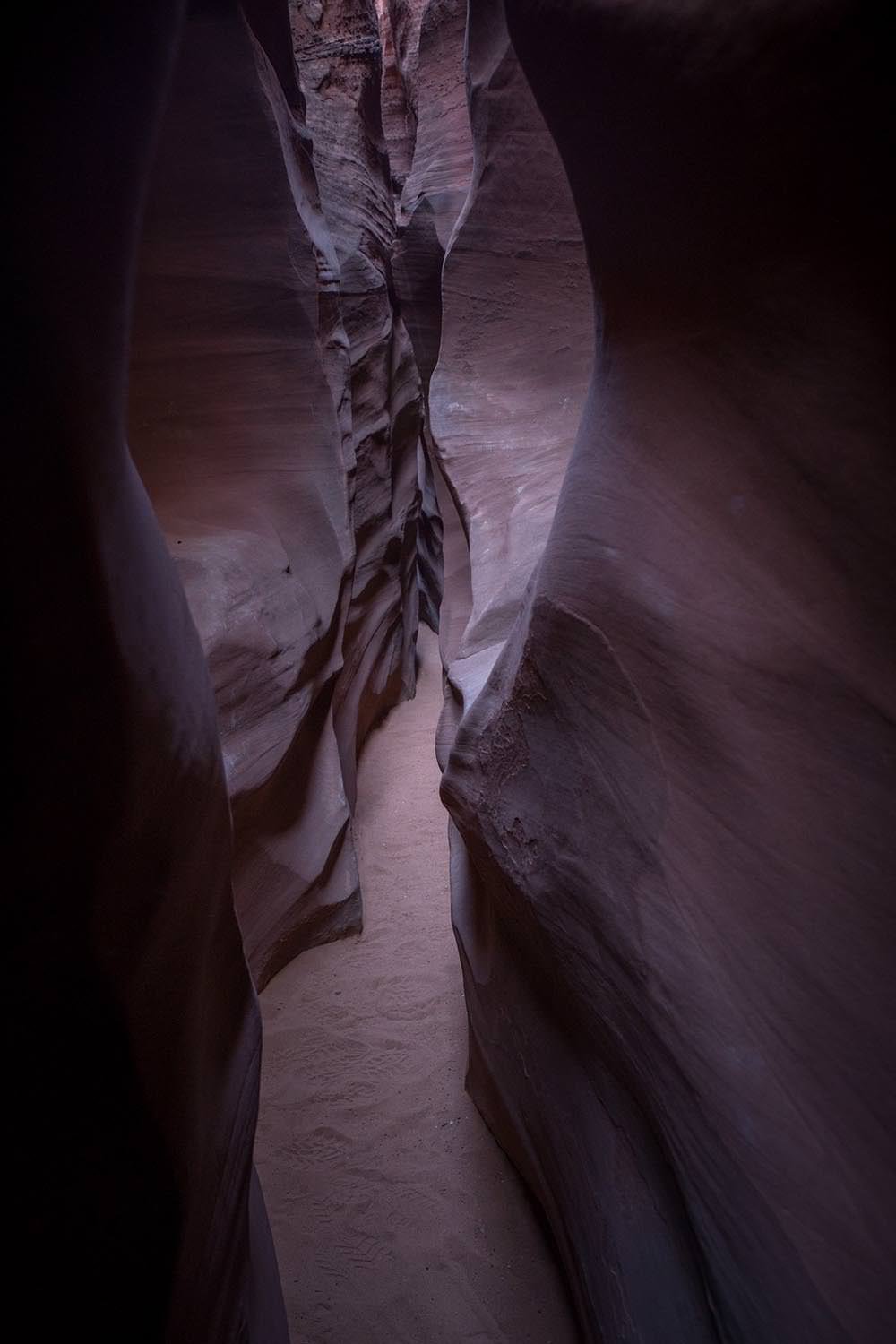 I guess it did look a little spooky. 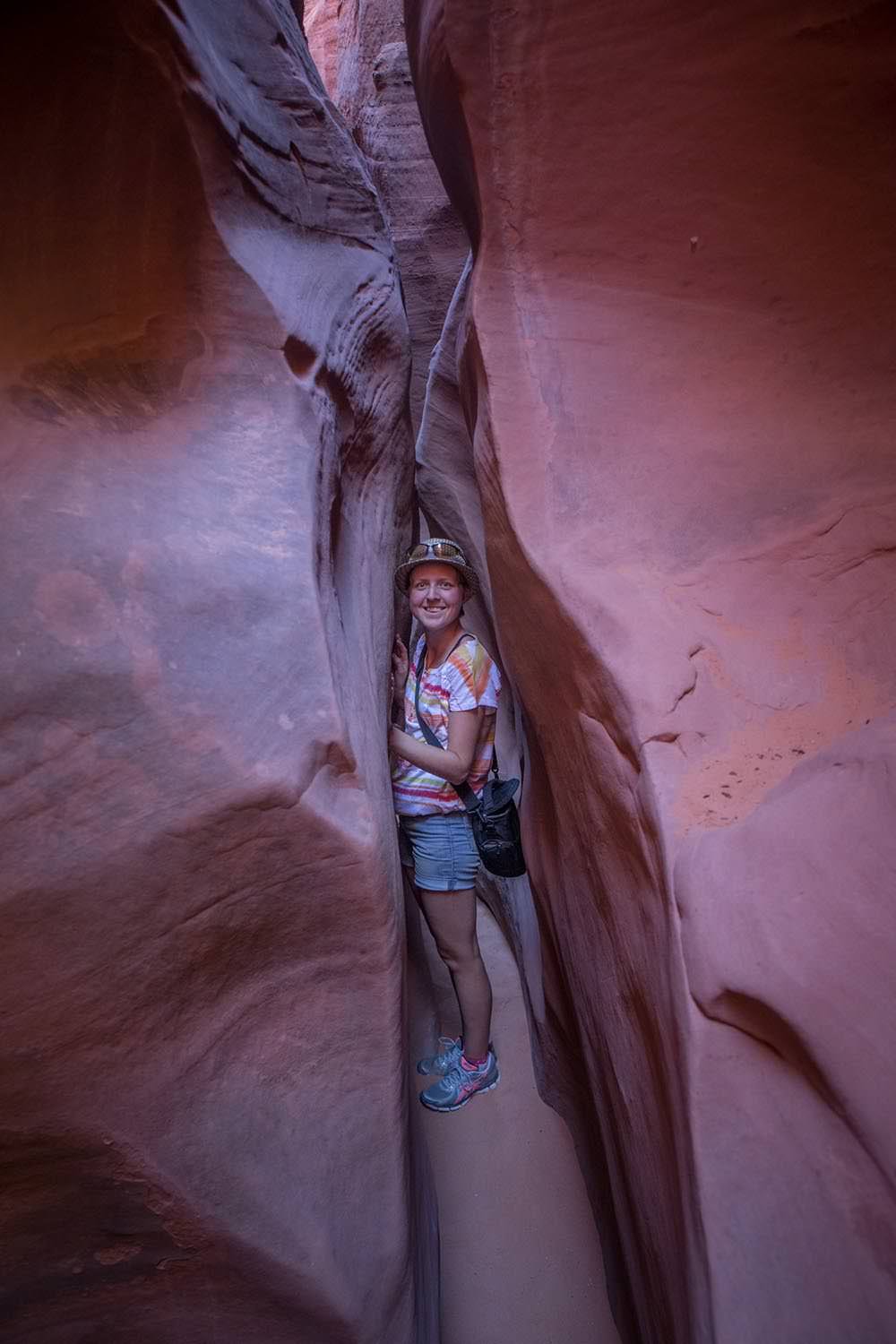 But we think a better name would have been. ‘Eat less cake’ Canyon. Because it did get rather narrow. 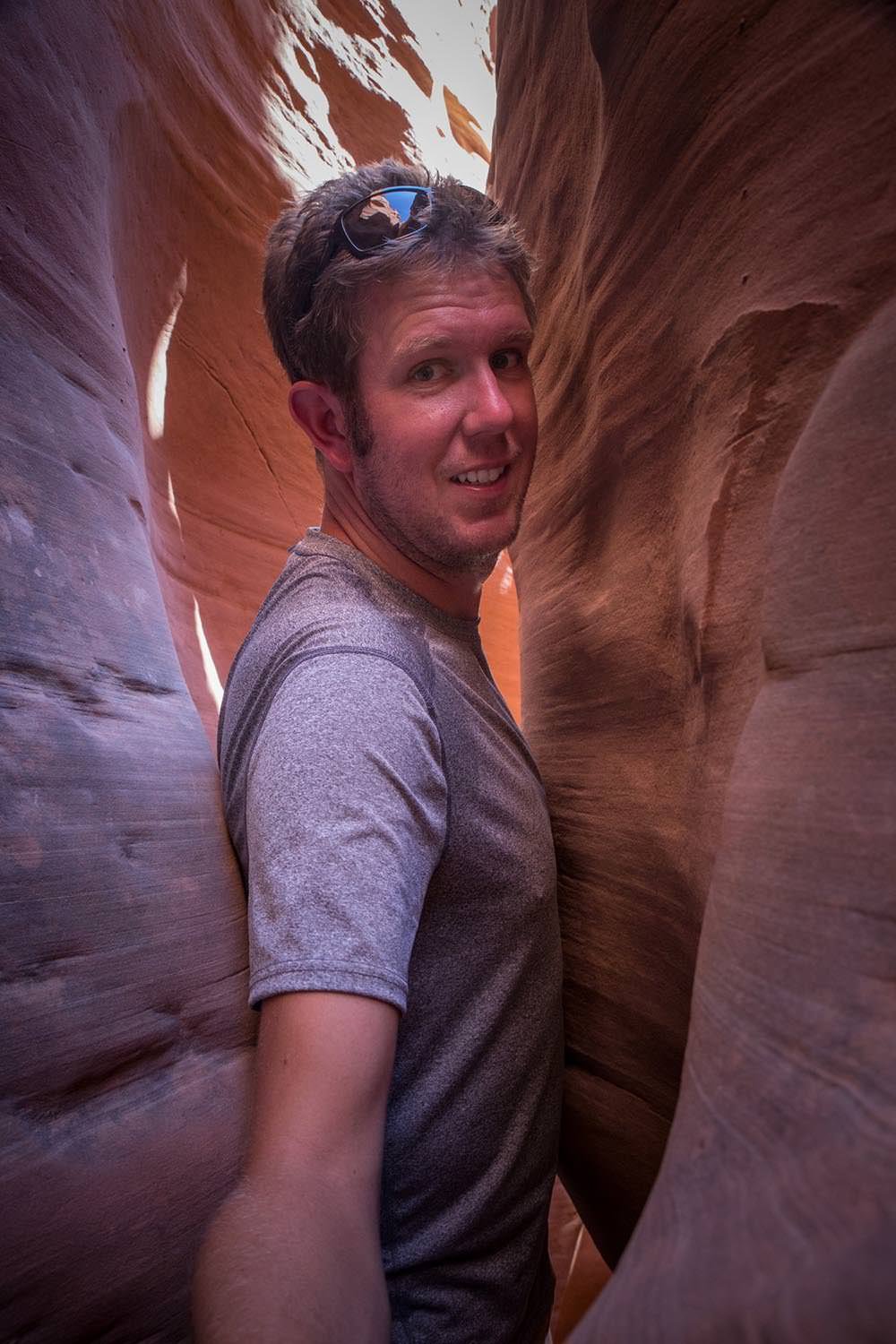 Any more pecan sticky buns are out of the question at this point. 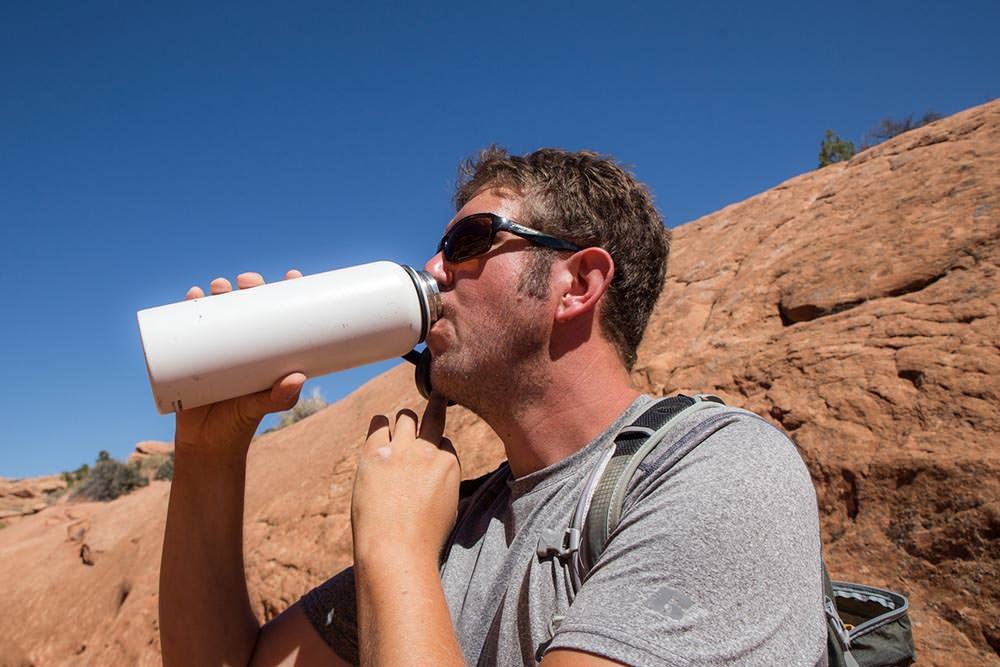 Water: Apparently this is a necessity in the desert.

As if a day of squeezing our way through winding sculpted canyons wasn’t enough. We stopped by to check out some dinosaur footprints on the way back to camp: You really have to tilt your head and squint to see this one, but this is a row of dinosaur footprints left in mud millions of years ago, which is now exposed rock. Suffice it to say this was followed by several minutes of Emma stomping around pretending to be a dinosaur while Ben watched on looking bewildered. (Fortunately no footage was recorded of this occurrence).

And just in case you still aren’t convinced that Utah is another planet, here are some photos of the Devil’s Garden. Another example of mother nature’s amazing ability as a sculptor. She really could have had a career in that if she had just focused more at art school: 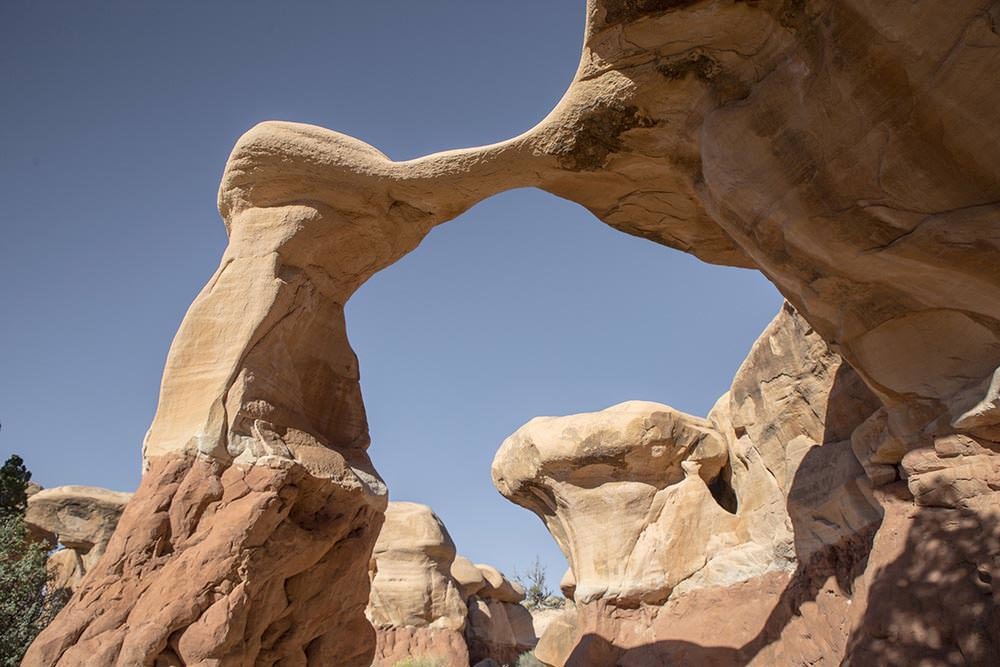