Why we are driving next time 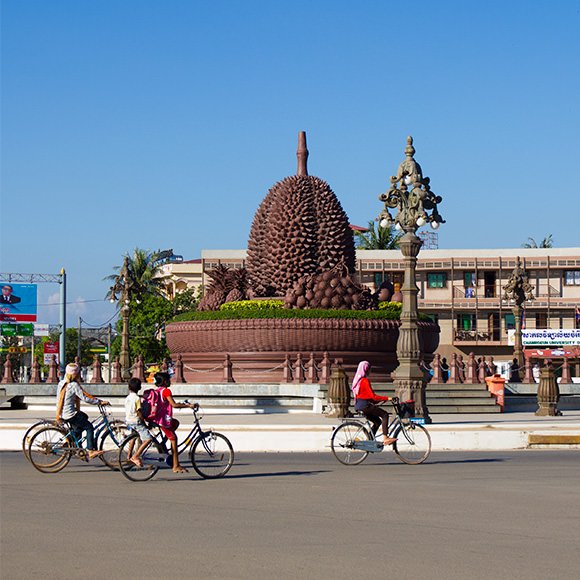 The following are accepted facts when booking transport in Cambodia:

We were told the journey from Kampot to Saigon would be about 8 hours, we thought 12 was probably a more reasonable estimate. We thought wrong…

The bus arrived to pick us up early, not the mini-bus we had been dreading, but a proper bus and a whole 15 minutes early. That’s 45 minutes earlier than most buses tend to be at home. We were amazed and impressed—we probably should have been more suspicious.

After rattling around town for another hour picking up other travellers, we drove to Kep and picked up some more passengers. Not too many though—only the last two people to board were issued with plastic chairs to sit in the aisle, otherwise there were enough seats to go round—perhaps they hadn’t managed to sell all the tickets? Surely there were more people to cram in? But no, that was everyone—and we were away. 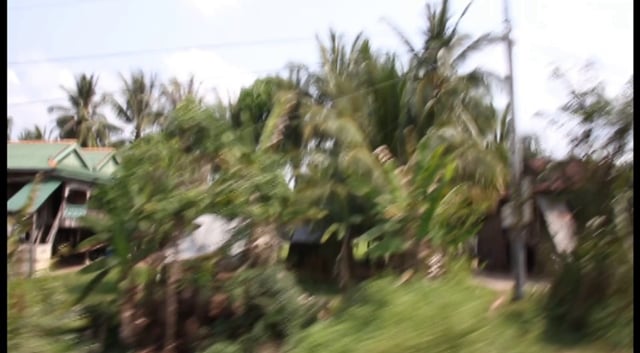 The bus rumbled and bounced to the border at a cracking pace, we were making good time and enjoying the journey. It wasn’t long before we arrived at the Ha Tien border crossing. The friendly, curvy Khmer script on the signs was replaced with the angry, shouty caps-lock of Vietnamese signs. We were promptly stamped out of Cambodia, it took a little longer for the Vietnamese immigration staff to limber up their stamping muscles and send the bus on their way, but we were soon back on the road.

It turns out most of the folk on the bus were smarter than us, they were heading to Phu Quoc island, so the bus emptied out at the docks and there were just a handful of people left on board when we rolled into the local bus station. After a short wait in the late morning sun we were herded on board the next bus to Saigon.

Local buses, we have heard, are a great way to meet regular people who don’t work in the tourism industry and give you an opportunity experience what a country is really about. I’m not so sure—over the rattling din of the bus, with it’s horn blasting every 30 seconds, the constant shouting and haggling from the despotic conductor and ‘Vietnam’s got talent’ blaring loudly on the TV screen there was no chance of striking up any kind of conversation with the bored locals shuffling on and off the bus. If this is what Vietnam is really about, I want to go back to Cambodia, everyone there smiles and waves is keen to stop and have a chat about pretty much anything. 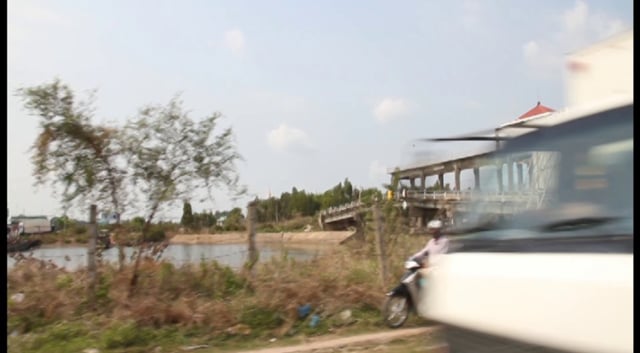 The journey went on for a lot longer than expected, the afternoon rolled by and we were only very slightly closer to Saigon. This was despite the fact that the bus driver drove like he had a death wish—maybe he did—what if the wildly controlling conductor was his wife? No wonder he had the TV on so loud. Every time we drove past someone who looked like they might want to hop on board we would shudder to a stop, there would be some pointing and shouting while the fare was negotiated then we would lurch back into motion. All the while the horn was blaring to warn people that a fast-moving bus-shaped monstrosity was roaring by, within inches of their bike/food stand/dinner table/house.

The sun had set and we were not even half way from Ha Tien to Saigon.

Then something magical happened, the noise stopped, the shouting stopped, the TV stopped all was quiet…We may have been parked on the side of the road with smoke coming out of the engine bay, but at least it was quiet.

Mechanical issues resolved (or more accurately, ignored) we were back on the road. Briefly.

After a half hour dinner stop, we were finally on the road again. Also briefly.

We stopped in a service station and Conductor Hitler motioned that we should get off the bus here. Confused, as we were not quite half way to our destination we decided not to argue with the white gloved despot.

It soon became apparent that we were to be hopping in a people mover with a young guy (who was labouring under the misapprehension that he was hot shit), his disinterested girlfriend and a chain smoking driver with an even more intense death wish than the bus driver. Hitting record speeds on poorly lit roads and swerving around traffic at pace, the people mover was making some pretty rapid progress. It would have been faster if Mr Hot Shit hadn’t been trying to make some cash on the side by picking up extras on the way. Jammed awkwardly into the people mover, Mr Hot Shit squashed as many in as he could without compromising the legroom of the 4′ 10″ girl he was trying to impress.

Unpleasant and all as it was to be jammed up like sardines in the back of a people mover, cigarette smoke burning our eyes, with a guy trying to impress his girlfriend with his mad skills at mocking foreigners in a mixture of Vietnamese and broken English—we were pretty stoked to be moving so quickly. While death waited around every corner, there was also a night in a hotel in Saigon waiting at the end and that was a gamble we were willing to take. The sooner we got there the sooner we could have a hot shower and a bit of a laugh about the day’s events.

We arrived in the city and the vehicle stopped and we were unceremoniously dumped on the side of the road, without any explanation, in the dark, just before midnight, in a foreign city with no real idea where we were.

We soon realised we had been dropped just down the road from the entrance to a bus station, but a quick look at a map showed that the bus station was on the other side of town to the hotel we had conveniently made a booking with earlier. Not really being too keen to hop on another bus we flagged down a taxi and after being driven directly to the hotel, without taking any extended detours, with no other passengers being jammed in, being charged a reasonable fare, no mechanical troubles and more leg room than you could shake a stick at we could have hugged the taxi driver. Not wanting to traumatise him, we instead opted for the ‘keep the change’ approach.

Arriving at the hotel we were disappointed to hear that as we were expected much earlier and hadn’t contacted them our room had been given away, but the lady at the counter looked at us with sympathy and managed to wrangle a different room for us. Unbelievably $30 had bought us a luxury night in a hotel with an amazing shower, a huge, comfortable bed, even those cute little toothbrushes that come all individually wrapped, plus breakfast included. The discomfort of our 16 hour bus journey was soon forgotten as we treated ourselves to little nibbly-cakey things from the local 7-11.

But we did make an important decision that night—Next time we are definitely driving.