All the butterflies are dead 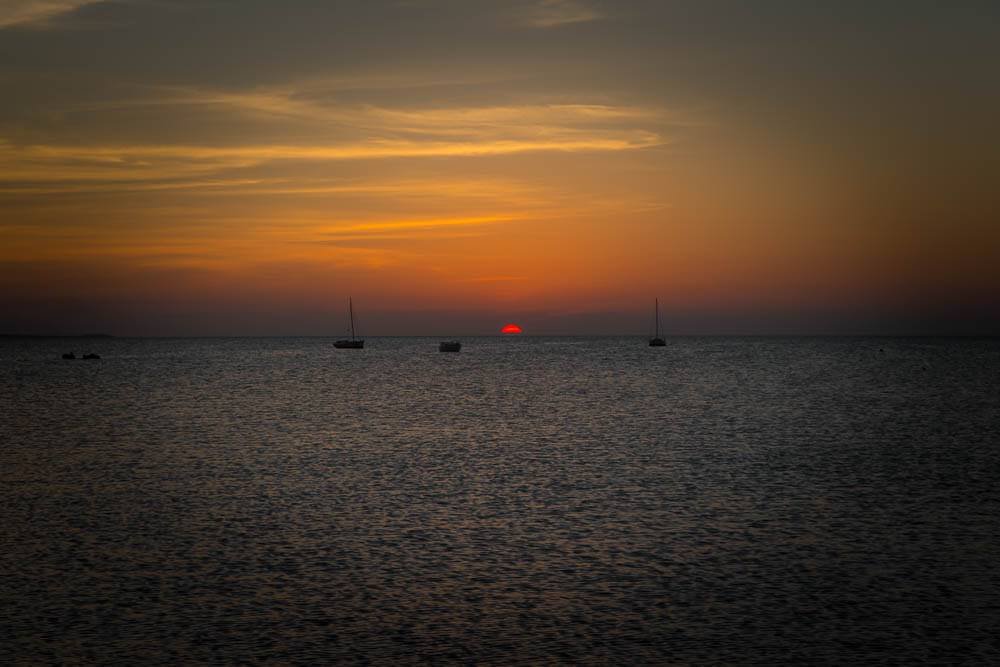 There we were in San Ignacio, Belize, on the border with Guatemala.

“You know, I’m really looking forward to going to Guatemala…”

But this time, we didn’t. We decided that no, we weren’t done yet with Belize, we’d explore Belize some more before making any rash decisions about whether to head to Mexico or Guatemala next.

Perhaps we were becoming responsible adults and had stopped making snap decisions to cross borders to new countries for no apparent reason. Perhaps not.

From San Ignacio we headed for the renowned Hummingbird Highway, rumoured to be the home of some of the most spectacular scenery in the country.

It was OK. But then we’ve driven down a lot of scenic roads in this trip so far. Also, the rainy season had begun, we drove much of the road in torrential downpours, but every now and again the skies cleared for a better view. 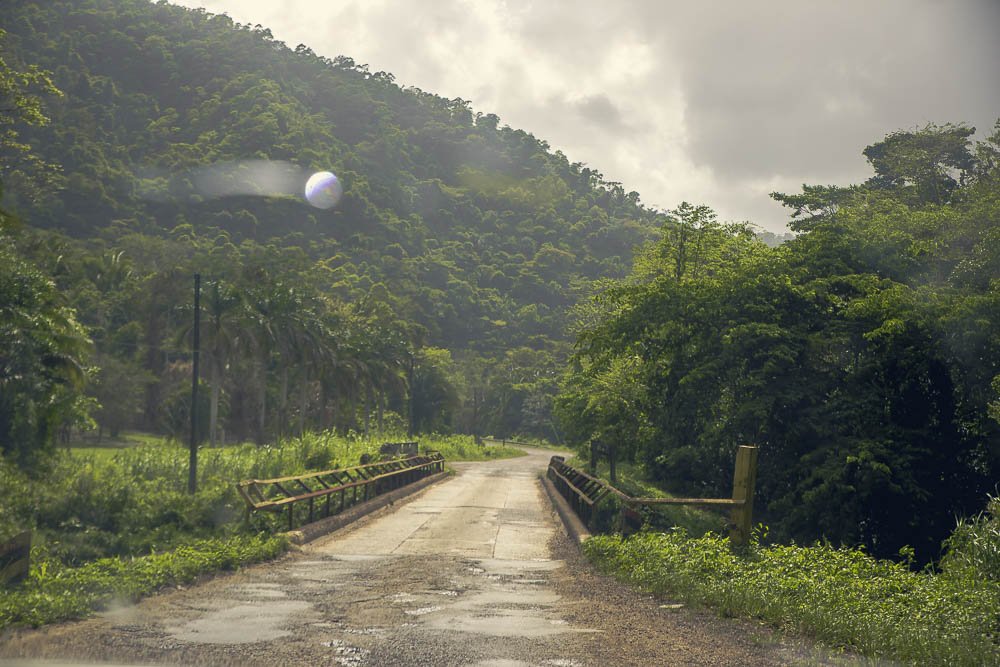 Yeah, ok, so it is a relatively scenic drive.

We actually needed to find somewhere suitable to do some work online. This was the downside of our new digitally nomadic lifestyle. Yes, we could now afford to splash out on exciting tours into the Mayan underworld, but we also regularly required reliable internet access—The curse of the modern nomad. A need to strike a balance between adventure and an unbreakable tether to the online world. I don’t just mean the irrepressible urge to see what Barry and Carolina have been posting on Facebook, now we actually needed access to the internet to fund the continuation of our trip.

Due to both the prospect of camping in the rain and not finding fast enough wi-fi, we drove the renowned Hummingbird Highway without really stopping to take in the scenery. Not to worry, we planned to return this way and enjoy it later, perhaps it wouldn’t be raining so much on our return…

Finding ourselves back on the coast, we holed up for a day or two to get some work done in what I’m sure looks like the world’s worst office. 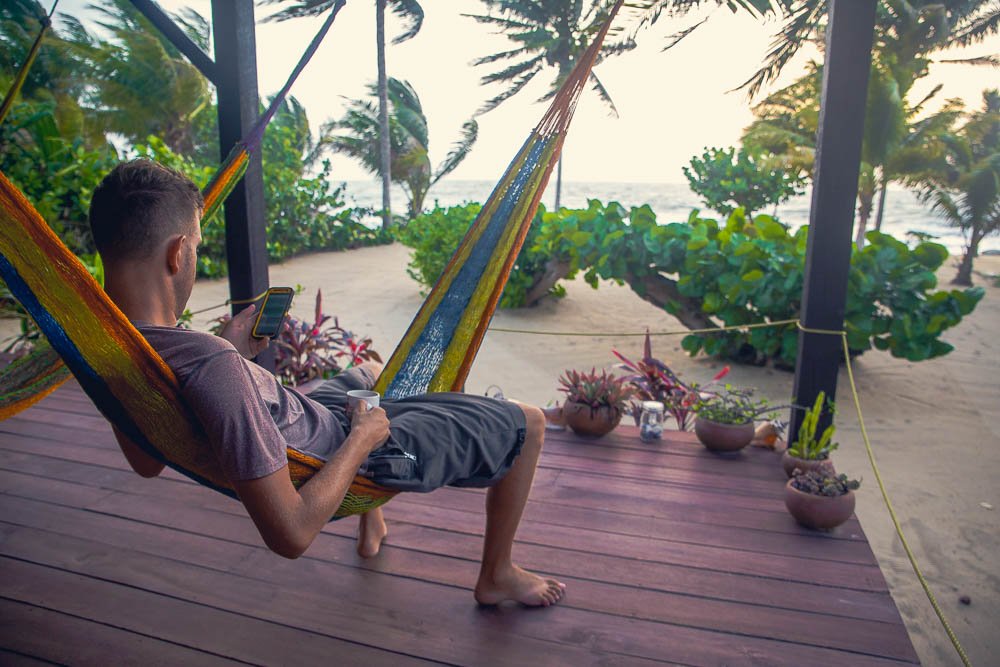 Ben. Not working. But it’s good to see what Barry and Carolina are up to on Facebook.

We’re not really in a position to complain about having to find wi-fi in order to do work when this is where you have your morning coffee. 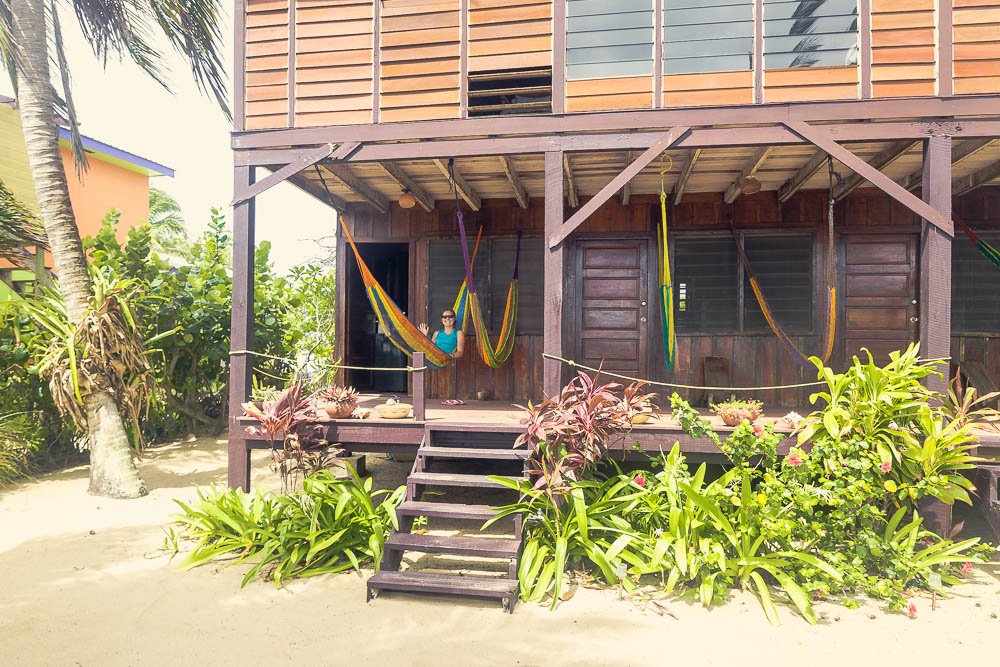 Emma struggled to leave her comfy beach-front hammock on the morning we were supposed to be hitting the road. Especially when the sun finally peeked through to brighten the morning.

Hopkins, Belize seemed like a pretty laid back kind of place, and our beach-side office confirmed the idea that being able to mix work and travel—while being a complicated juggling act—was going to be a worthwhile endeavour. Conveniently, it was easier than it might have been to get inspired to work in this tropical paradise. This was due to the skies being terminally overcast and the wind unrelenting for the majority our time there. The ocean was a constantly churning mass of seaweed and crashing waves. This all meant that for the most part, the view from a cozy beachfront cabin was sufficient. 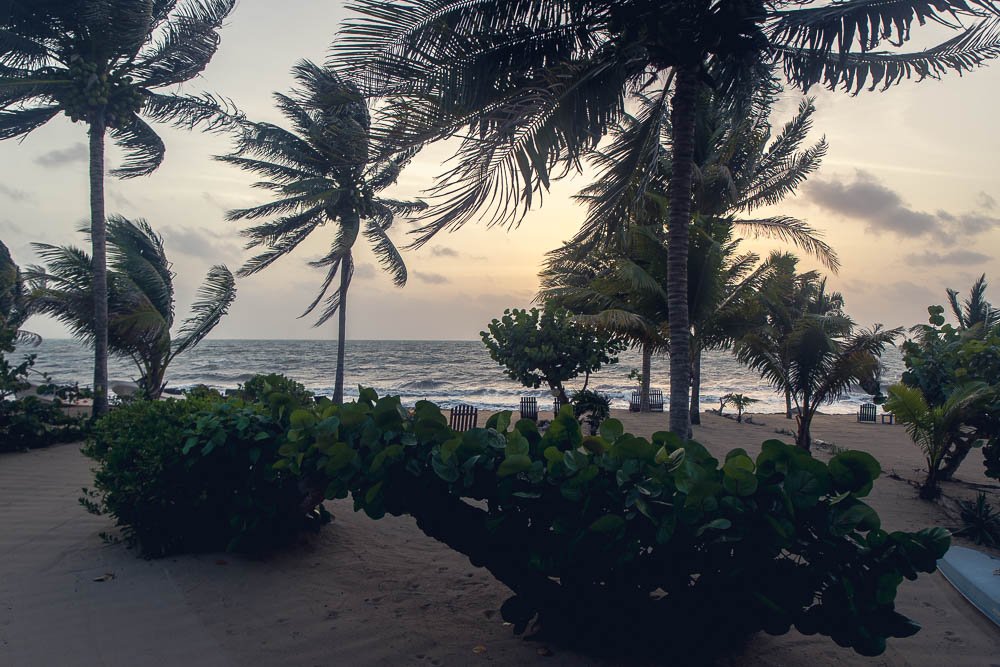 The weather might have been a bit hit and miss. But the view was consistently pleasant.

Besides, we planned on heading back out to the Cayes next, we could enjoy all the quiet beach time we wanted when we headed out there.

Except the weather was not on our side. After a brief respite, things were looking increasingly gloomy. The weather reports suggested that the wind and the rain had no plans to ease over the next few days, we felt like a trip to a relaxing tropical island wouldn’t be the best choice in inclement weather. When we’d been snorkelling last time the 1 metre swells had made not smashing into the coral enough of a challenge, we didn’t fancy tackling even stormier seas.

Never mind, we’ll head down to Placencia first and give the weather a few days to improve.

We arrived that morning in Placencia and found it to be an  area that didn’t really capture our imagination.

We were planning to celebrate our first ‘travelversary‘—one year on the road—with a visit to a nice restaurant and maybe a stay in a fancy hotel. We went to an OK restaurant (not the OK restaurant from our previous post, just one that was OK.)

We looked at the fancy hotels.

We decided Placencia just wasn’t our kind of destination.

We forgot to take any photos in the short time we were there, but this was the partially completed housing development that we passed on the way down the peninsula.

The whole area was pretty much one housing development or hotel complex after another. Occasionally while driving we caught glimpses of ocean between the buildings. But really, it wasn’t that great.

So we made another snap decision. This time we were going back to Mexico.

But not before stopping by one of our favourite spots in Belize—Sarteneja.

Last time we had been there, we had been so wrapped up in relaxing in the warm tropical waters that we completely forgot to stop by and check out the local butterfly sanctuary. Well, Ben didn’t forget, he just hates visiting butterfly sanctuaries. Not because he hates butterflies, he just doesn’t quite share Emma’s enthusiasm.

Emma’s approach: Wait—I don’t think I got a photo of that one. Oh this one’s different. Hey, did you see the blue one. Oooo! I think this one is going to land on me let’s stand still for 10 minutes. *Squeal of delight* Hold on look at this one. I just need a better photo of this one. *Excited clapping of hands* That’s one we haven’t seen. Etc…

We arrived in the car park to a sign requesting that we don’t apply insect repellant. 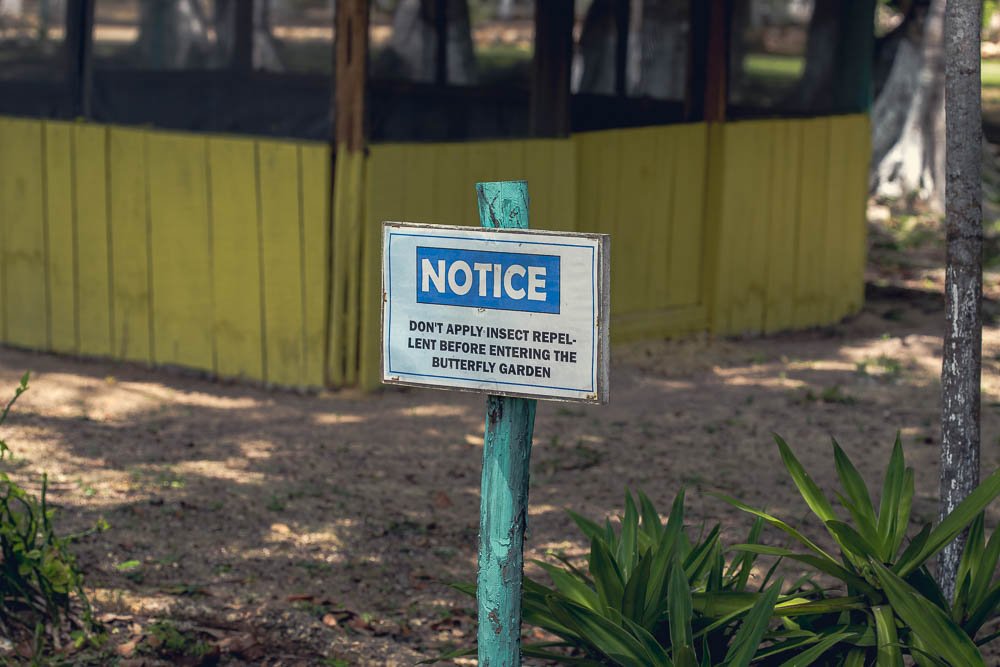 That seems fair enough to me. Don’t really want to be responsible for killing the butterflies.

So we obeyed the sign and entered the park, completely defenceless against the hoards of hungry mosquitos. Sure they were swarming, but we figured it wouldn’t take too long to check out the butterflies and then we could go put a layer of anti-mosquito on before checking out the rest of the park.

A volunteer greeted us at the entrance. (This greeting took long enough that we were each bitten about 5 times.)

She then enquired if we were here just to visit the nature reserve or the butterfly sanctuary as well. (Additional bites while we confirmed that yes, we wanted to visit the sanctuary and no we weren’t wearing any repellant.)

We then payed our relatively expensive entry fees. (Which also cost us another handful of mosquito bites each).

The volunteer then took us on a quick tour of the visitor centre. (Not quick enough. Every time we looked down another dozen mosquitos were nibbling at our arms and legs.)

Then she explained the mission of the nature reserve. (More bites.)

Talked about their involvement with the community. (Several more nibbles.)

Explained how there was also a short walking track and a viewing platform to visit in the park. (More firey death stabs.)

Then she said, “So do you want to see inside the butterfly sanctuary now?” (More bites, while we confirmed that yes, we did.)

She looked at us very apologetically and said. Ok, but just to let you know. All our butterflies are dead right now—except one. 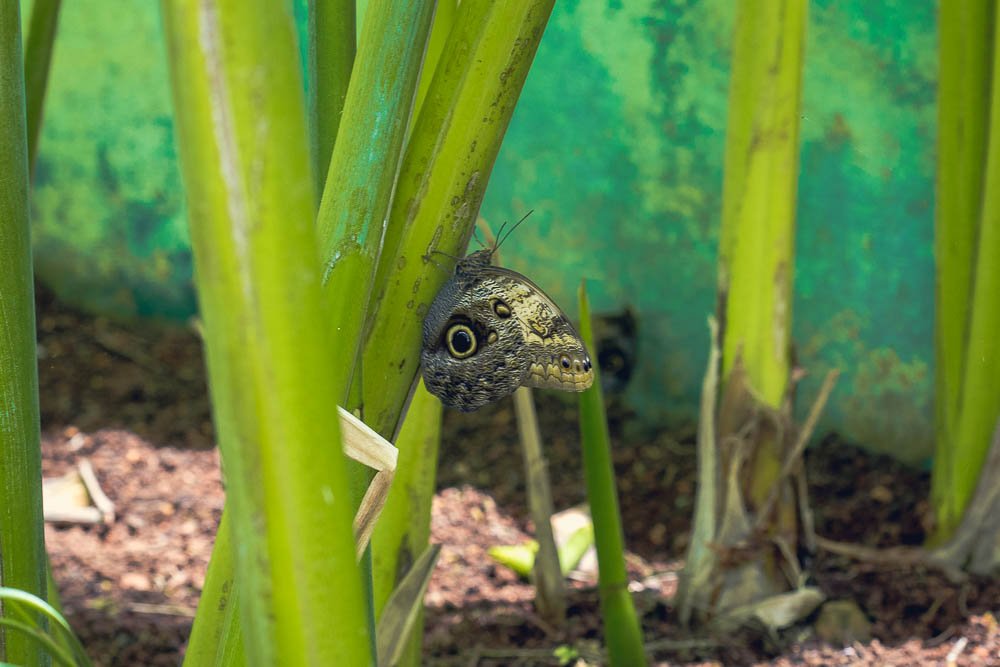 Given the size of the clouds of butterflies we had driven through on the way to the sanctuary, this seemed a bit on the disappointing side. Generally one hopes there will be more butterflies inside a sanctuary than outside.

She showed us a few of the next generation of butterflies that were coming through, so that the next visitors later in the week may indeed see a few dozen butterflies when they arrived. (The biting continued.)

Not quite a butterfly yet.

As soon as we were released from the tour we turned tail and ran back to the car. Applied insect repellant, breathed a sigh of relief. It seemed necessary to climb the viewing platform so that we at least got some sort of value from the visit. Hoping it would give us something better to remember it by than swollen limbs and possible anaphylactic shock due to the sheer number of bites.

However it turns out there is not much to see from above a stretch of coastal Belizean jungle. 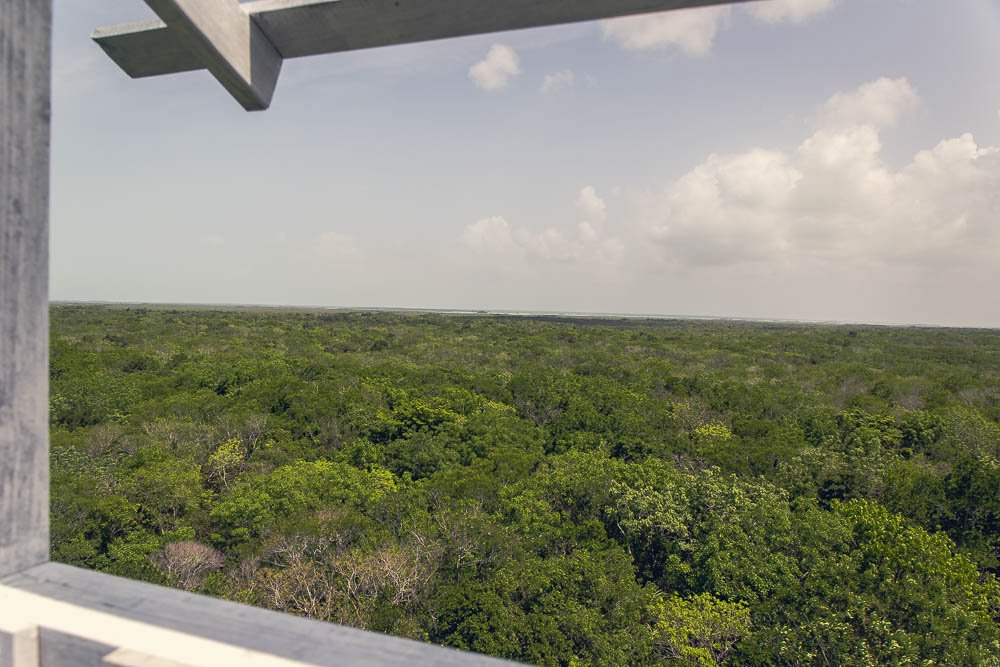 Luckily Emma enjoys stuff like this anyway, so just had enough fun climbing the tower. Ben however disapproves of heights even more than he disapproves of extended visits to butterfly sanctuaries. 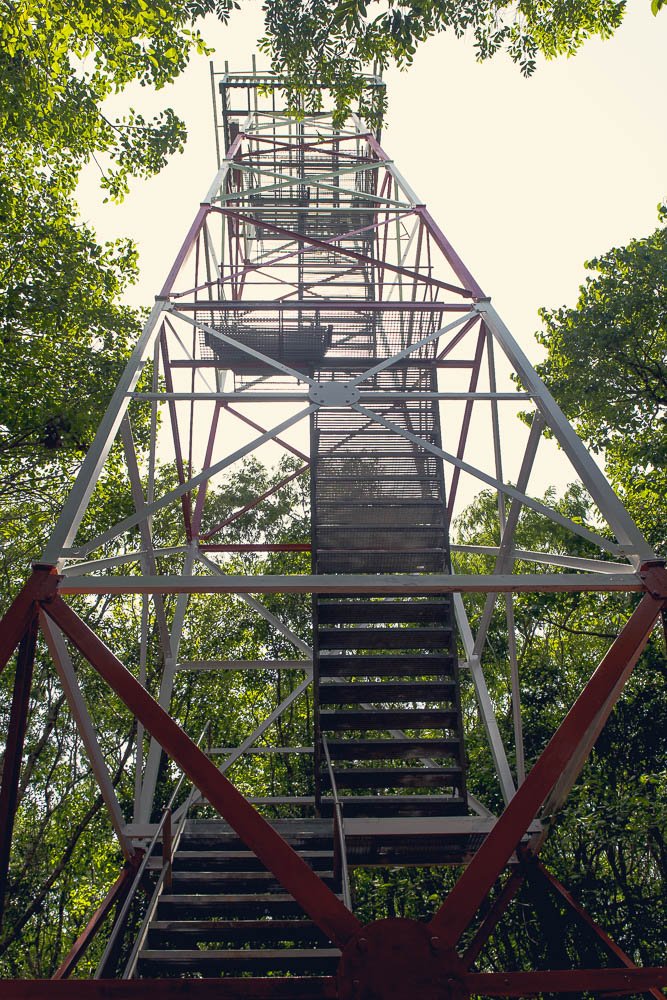 Not Ben’s idea of a fun afternoon.

He arrived at the top. 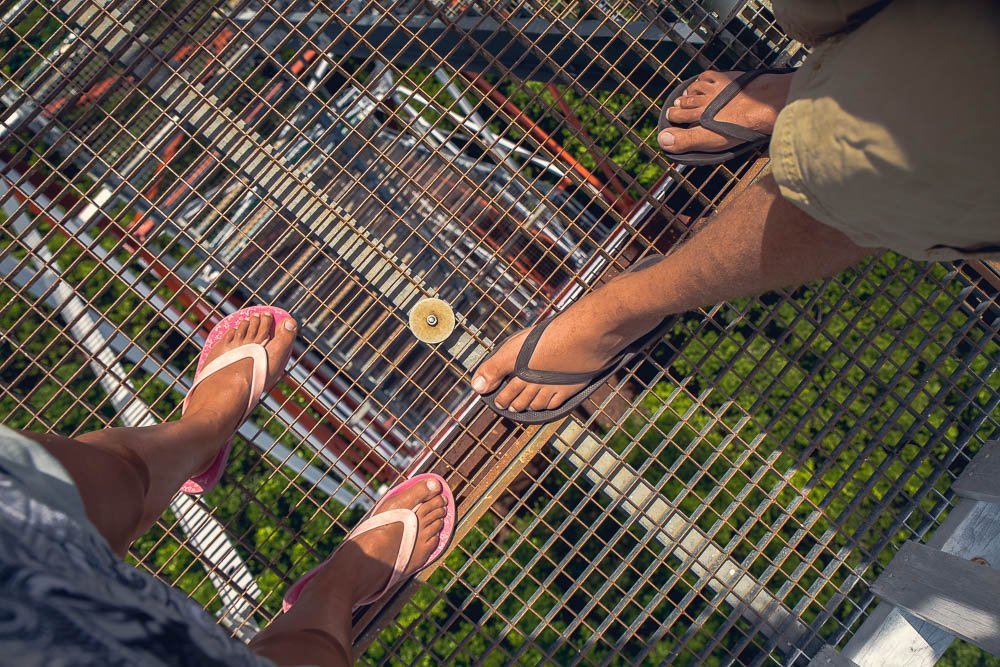 Had a quick look around. 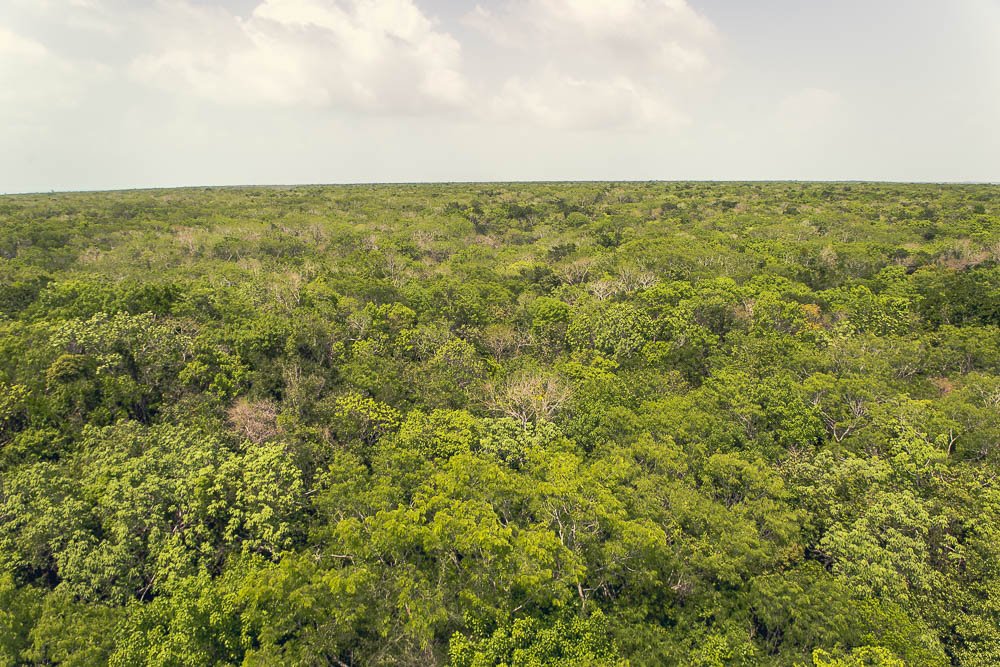 And got out of there pretty promptly. 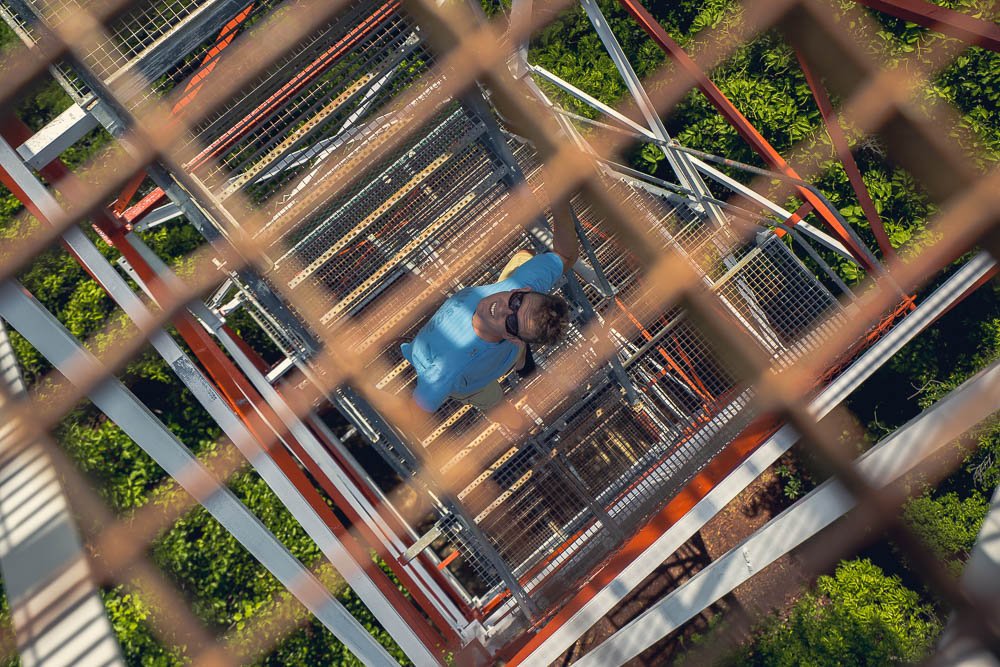 Luckily being back in Sarteneja meant more relaxing days by the ocean while we nursed our many mosquito bites. 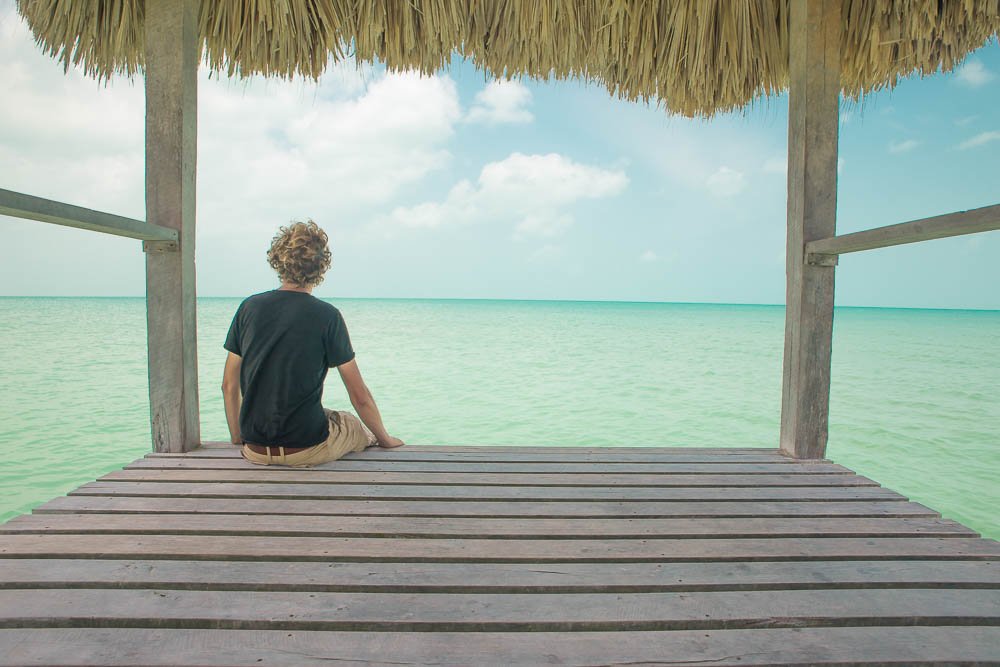