Into the mouth of the serpent 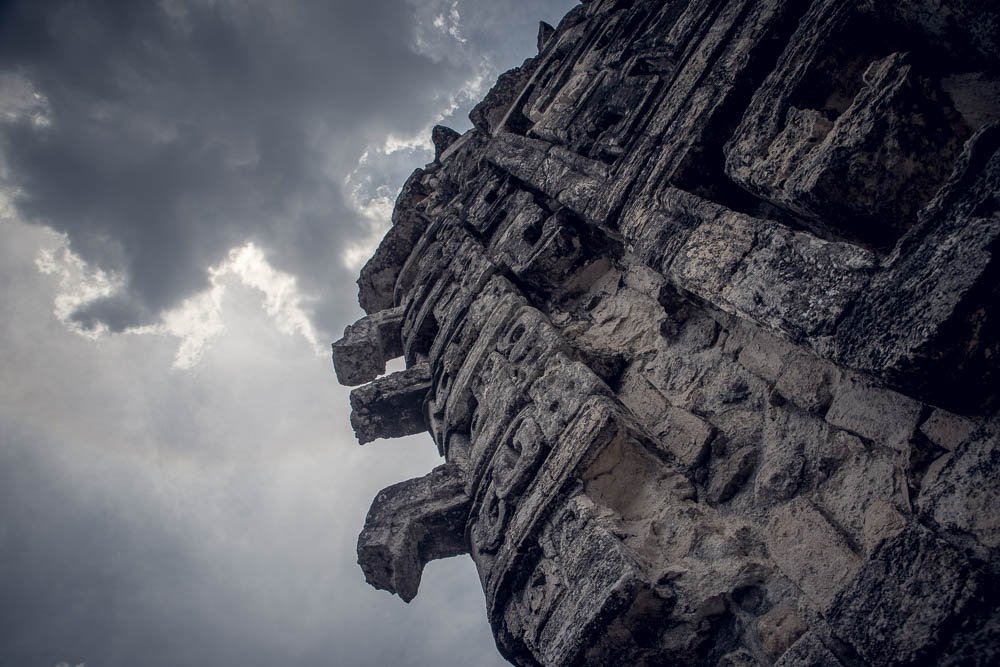 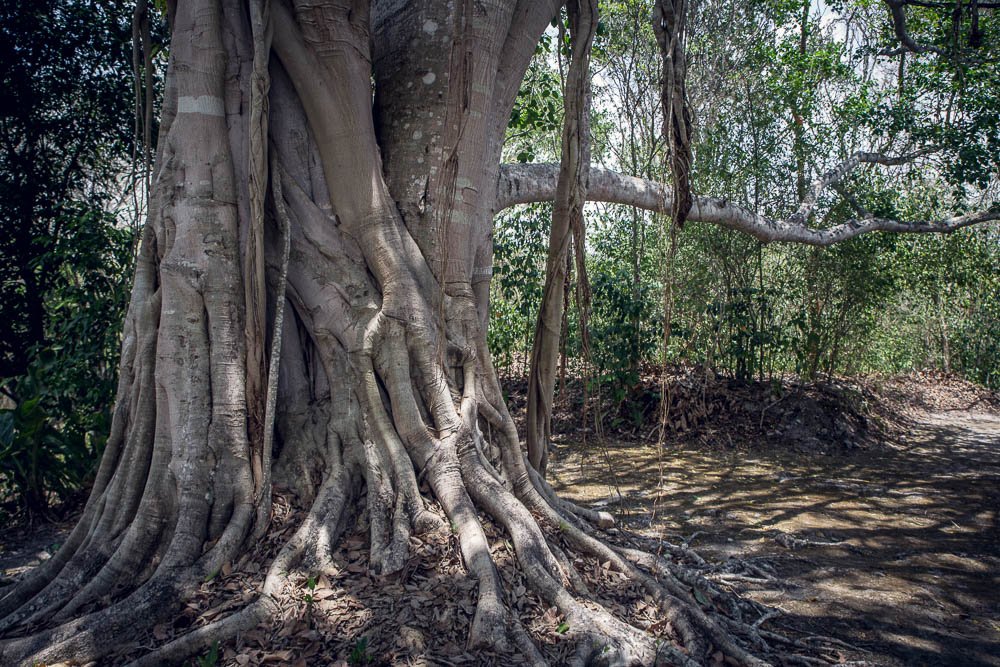 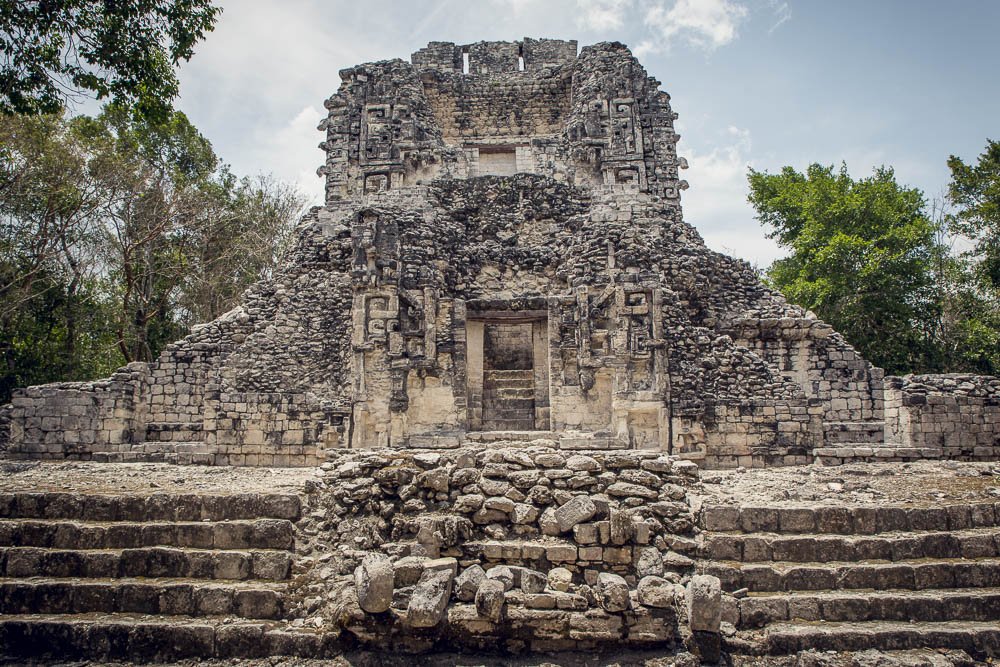 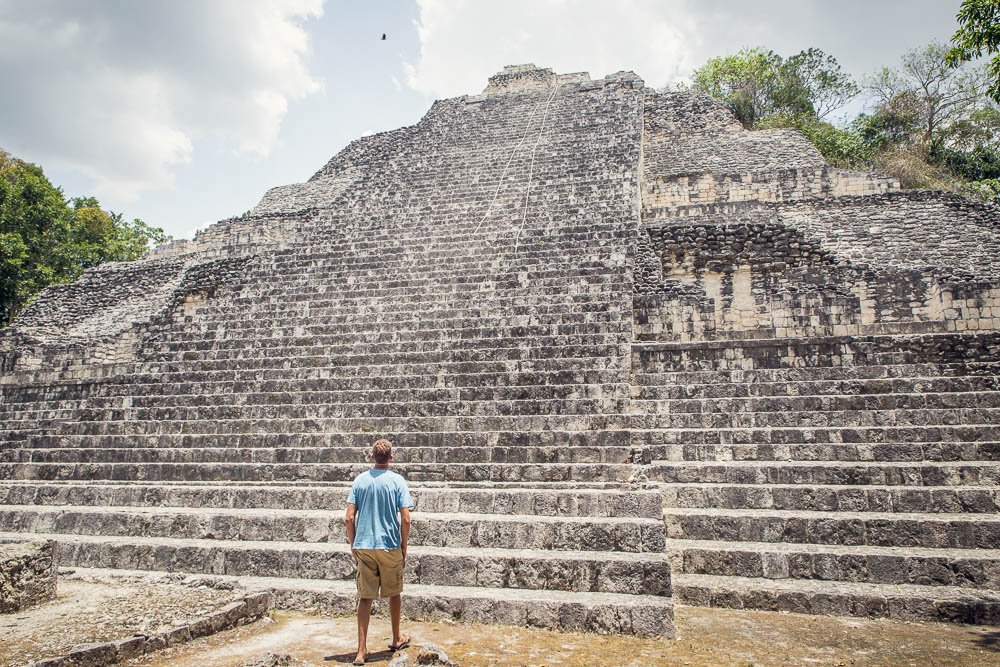 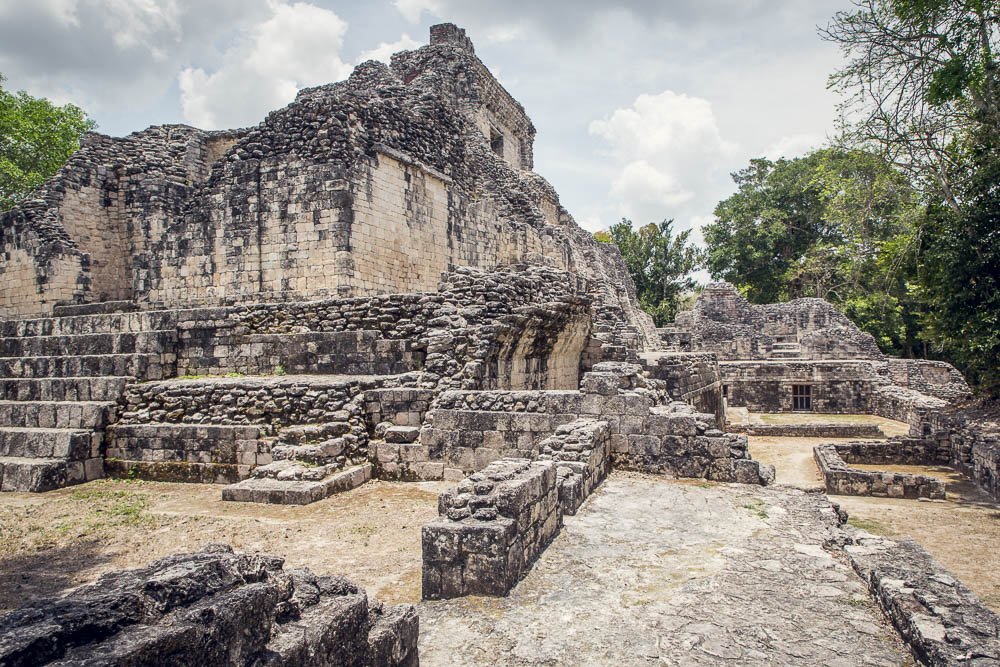 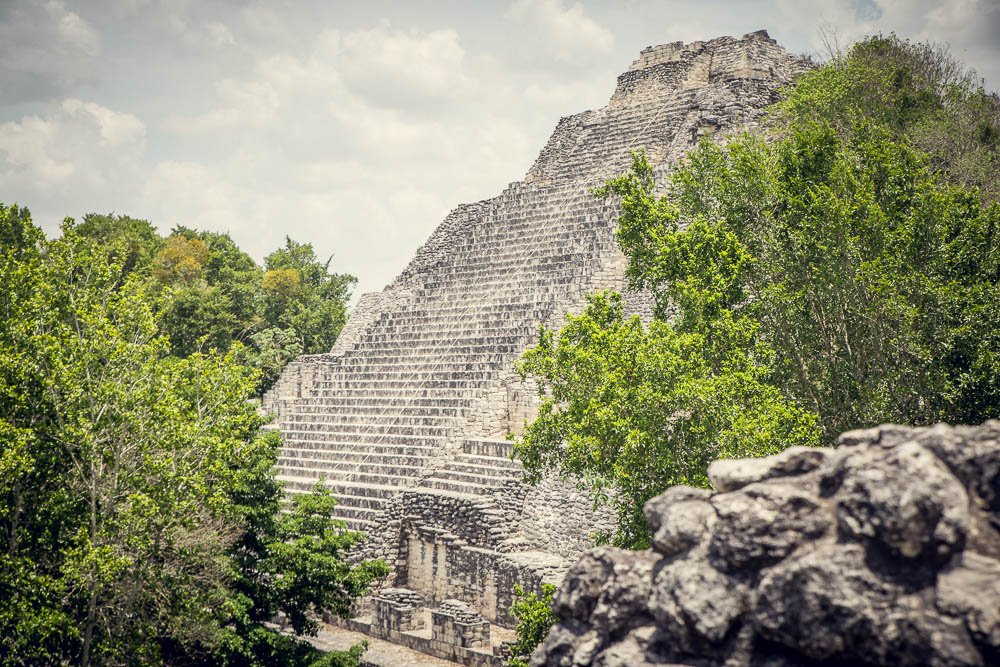 After a somewhat snap decision to leave Belize, we found ourselves back in Mexico sooner than we had planned.

First stop, the same campground we had stayed in prior to visiting Belize.

It had been pretty windy on our first visit: 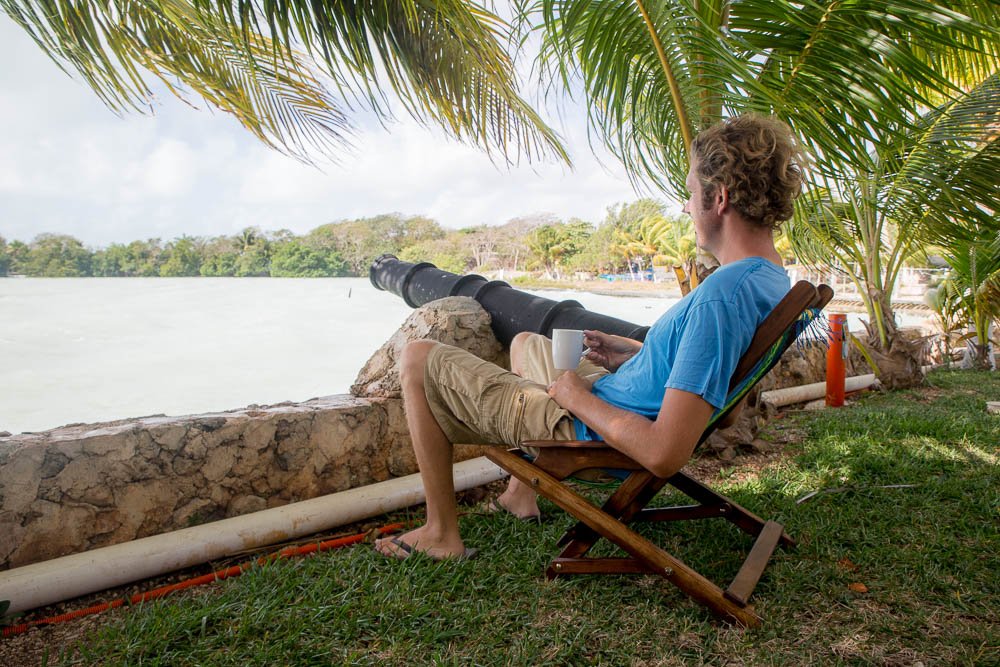 Ben enjoys a morning coffee stationed at the cannon overlooking the windy Caribbean.

And it was still windy the second time we dropped by.

But it was hard to beat the ocean views and palm trees—not to mention the pool and on-site bar. You can see why we came back. One morning we were sitting outside eating a tasty brunch in our completely impractical camping chairs. When we heard the sound of a brass band. Wondering if we should duck out to the street to see what was happening, it quickly became apparent that we didn’t need to move.

A parade rounded the corner into the campground entrance. Musicians, dancers and participants promptly wandered directly in front of our tent, down to the water’s edge.

It wasn’t the first time that a brass band had made sure we were awake in the morning. But at least this alarm clock was set for a reasonable hour.

The parade, a local religious festival, is apparently an annual event that passes through this campground on the way to the harbour where the participants continue the celebrations afloat on the Caribbean.

No matter how delightful a campground is, when the temperature is up in the 40’s with high humidity, it doesn’t take long to start to crave the cool air of the mountains.

We had plans to head for Oaxaca, but wanted to stop and check out some ruins on the way. You would have thought we had seen enough Mayan ruins while we were in Belize, but clearly this was not the case.

We had seen enough that we weren’t planning on any major detours to visit ruins. Well, except Palenque, but those were some rather famous ruins.

However Xpuhil, Becan and Chicanná were just of the main road. None of these sites would make most ‘top 5 lists’ of must see ruins in Mexico, but each were interesting in their own way.

The simple fact that these ruin sites weren’t the most spectacular things we’d seen on our travels really helped to remind us that we really are lucky buggers to be able to do a trip like this in the first place. We have nothing like this in New Zealand (We have a lot of cool stuff there, don’t get me wrong).

However, being able to see huge stone temples and palaces dating back over 1000 years to an ancient civilisation who’s descendants are still living in the same area, still continuing traditions that hark back to this glorious past is an experience that is hard to beat. New Zealand has history, just not dating back quite as far. Also, we just don’t have cool old stone ruins. Unless you count our crumbling Cathedral in Christchurch. But it isn’t really that old. Nor arguably that cool.

These particular ruins are in the Rio Bec style of architecture, unique to this region, which just basically means that the temples have really tall, pointy towers at each end of a long building.

The towers at either end aren’t really buildings you are meant to enter, they’re just for show.

But that doesn’t mean that the archaeologists haven’t tunnelled their way up to the top, so we couldn’t resist climbing up one of these towers at Xpuhil

View from the top.

But that was about all there was to see at these ruins, so we moved on to the next stop.

Well after stopping for our favourite roadside beverage. Doesn’t fit in the cup holder though. 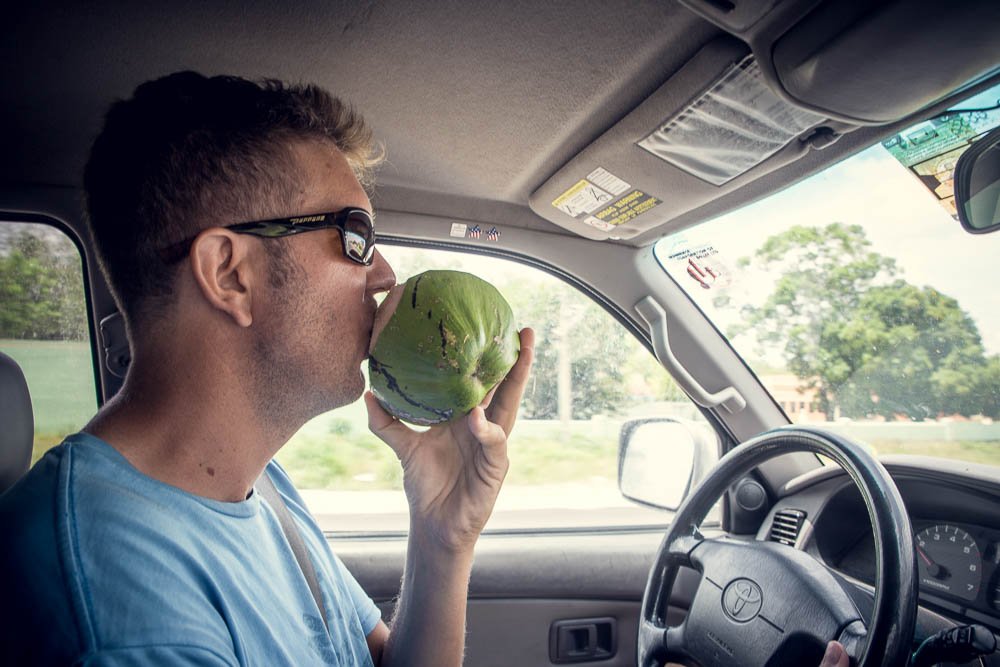 Also if you open them wrong this happens. And a couple of tall temples to climb with a view that included a glimpse of Xpuhil ruins in the distance.

Yep. Another temple to climb.

Even when you climb one, there is a taller one next door.

But the view is worth it.

Pretty sure these steps don’t meet any safety codes.

They were nice enough to provide ropes to assist you to reach the top of the non-code compliant temple steps. 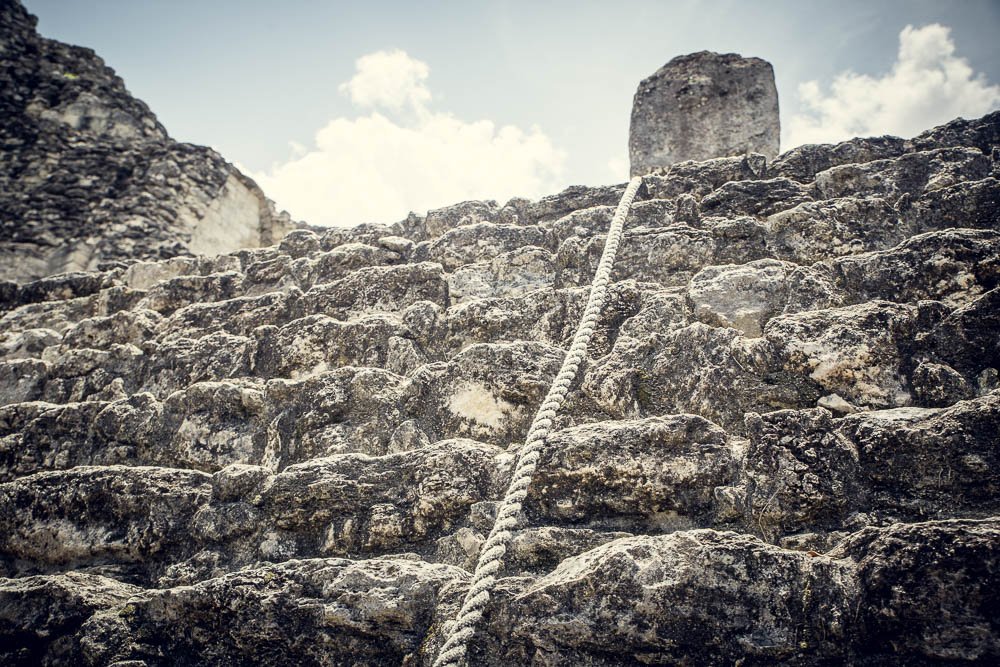 You know the steps are steep when they provide some ropes to assist.

Although perhaps you wouldn’t want to put too much weight on these particular ropes. 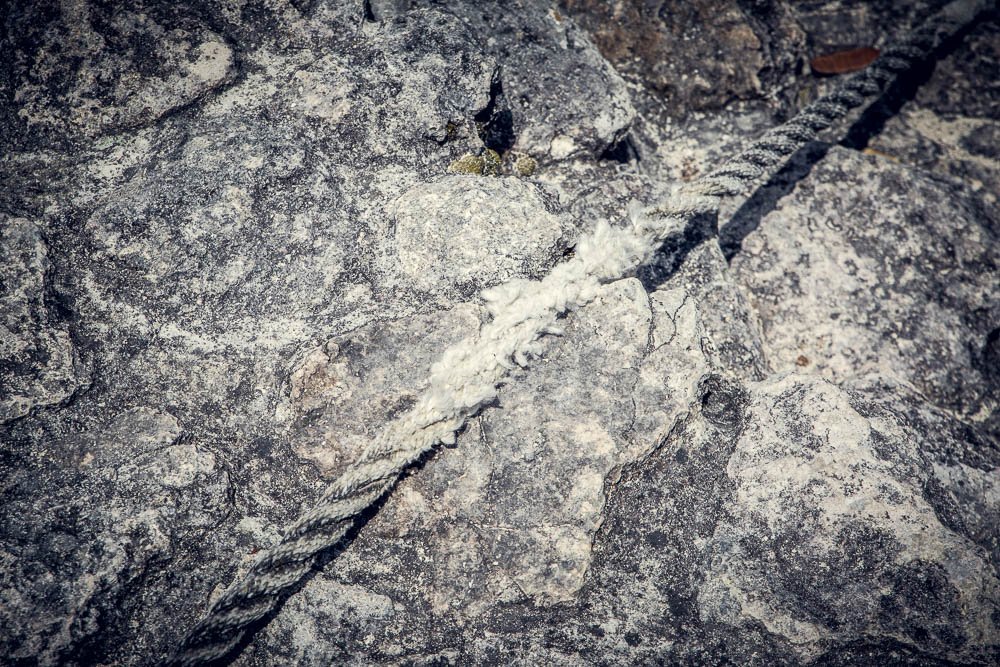 Final stop on our quick road-side ruin tour through Campeche state was Chicanná.

A small ruin site with some of the best preserved carving we have seen so far:

Although you could definitely see that they were still working on re-assembling some of this ancient jigsaw puzzle.

Plenty to keep the archaeologists entertained.

But the real highlight was the doorway for which the site was named. (Chicanná means ‘House of the Serpent Mouth’ in the local Mayan dialect).

Now that is a front door

This was (and continues to be.) Our favourite piece of Mayan architecture. Look at that for a front entrance—I feel like this would discourage door-to-door salespeople.

They just don’t build ’em like that any more.

We’ll finish this blog post with a few photos from the famous Mayan ruins in Palenque. We can’t expect you to be too amazed though, because quite frankly it would take something pretty spectacular to outshine that doorway.

We’d already seen the contents of K’inich Janaab’ Pakal’s (Pakal the Great’s) tomb when we were in the museum of Anthropology in Mexico DF. 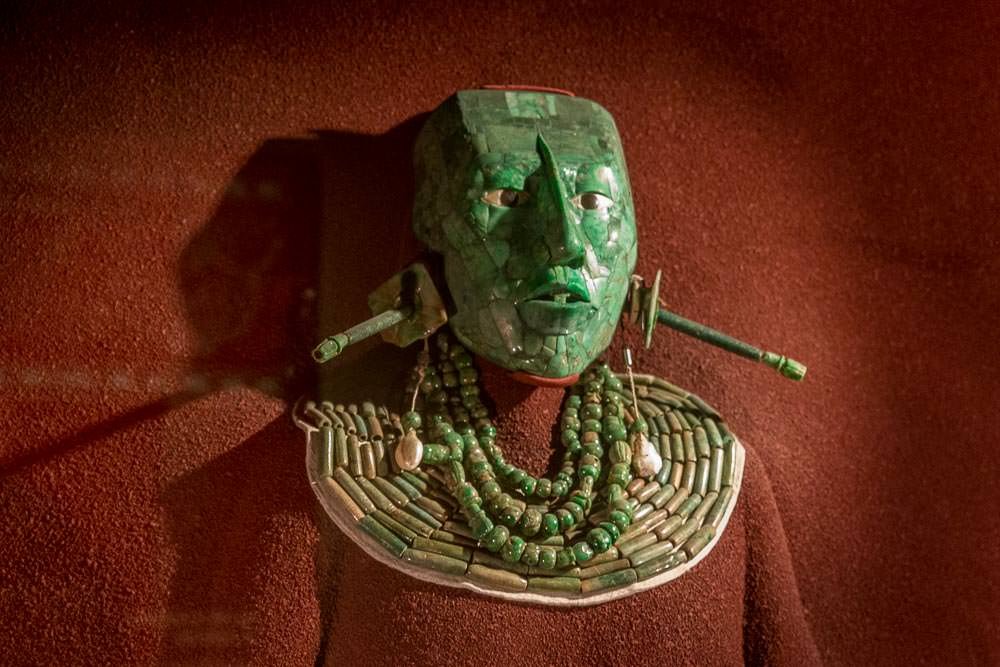 We’d already seen a reconstruction of his tomb there too, but that didn’t stop us taking a look at another replica in the Palenque museum. 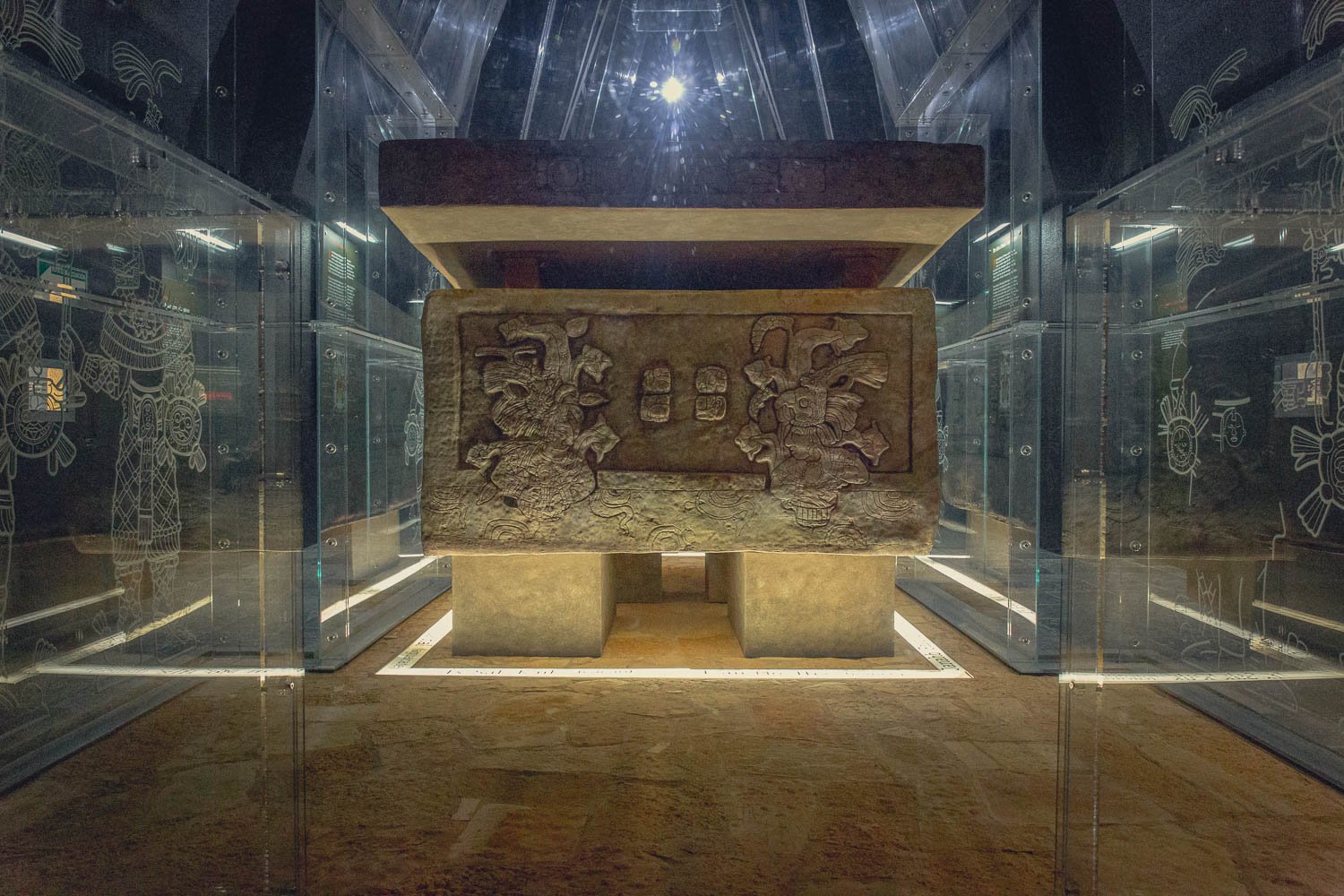 There are several replicas of this famous tomb throughout Mexico. Of varying degrees of quality. This one seemed pretty top-notch.

But we were really here to see where it had been found. That was deep within the Temple of the Inscriptions. 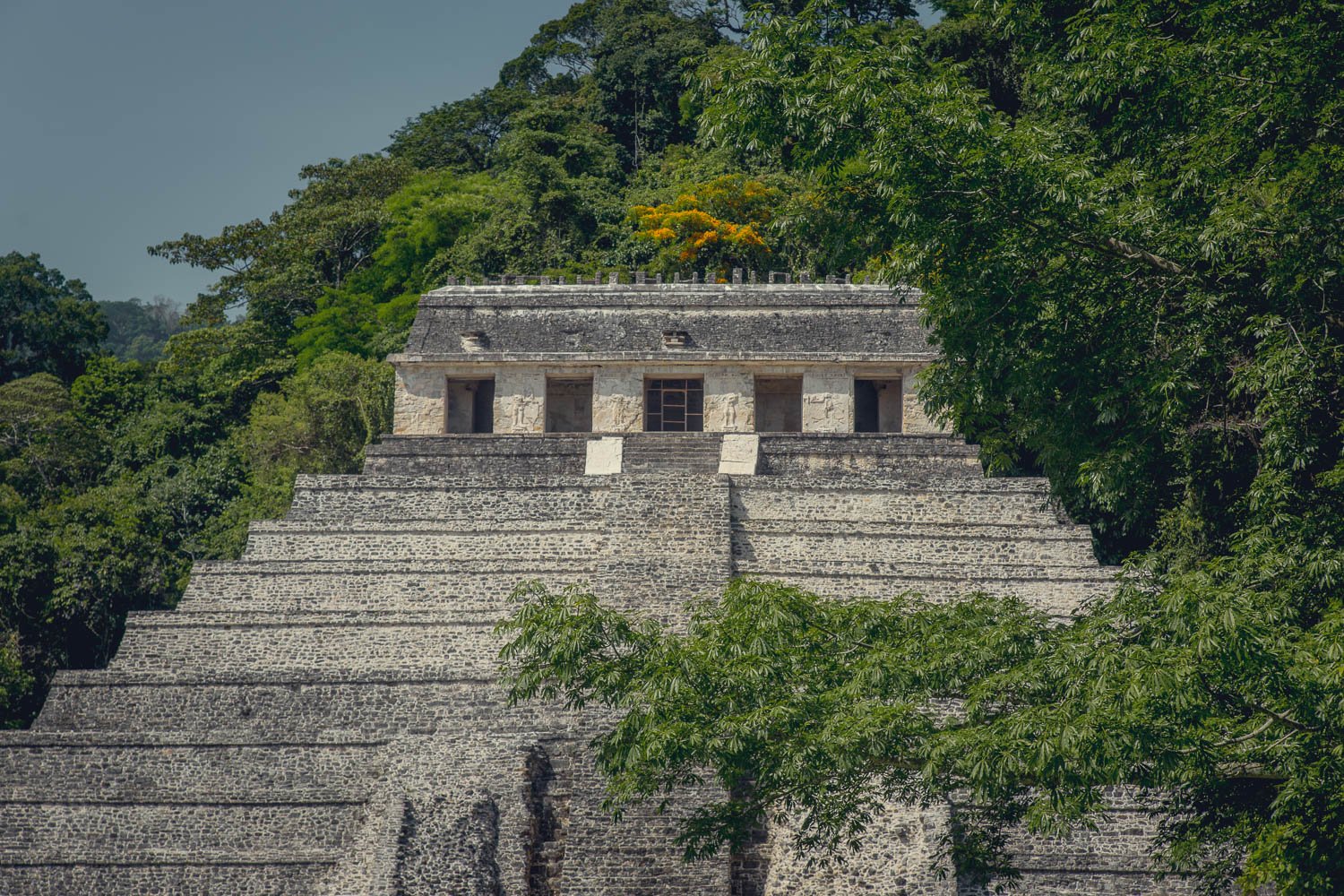 While all the treasures within have been removed and are on display in the Museum of Anthropology in Mexico, the stone Sarcophagus of Pakal the Great is still contained within. Sadly, it is no longer possible to visit the actual tomb in the bowels of the temple. Now you just have the opportunity to wander about a little inside the top levels and see a few dark rooms that contain exactly zero sarcophagi from ancient rulers of Palenque. 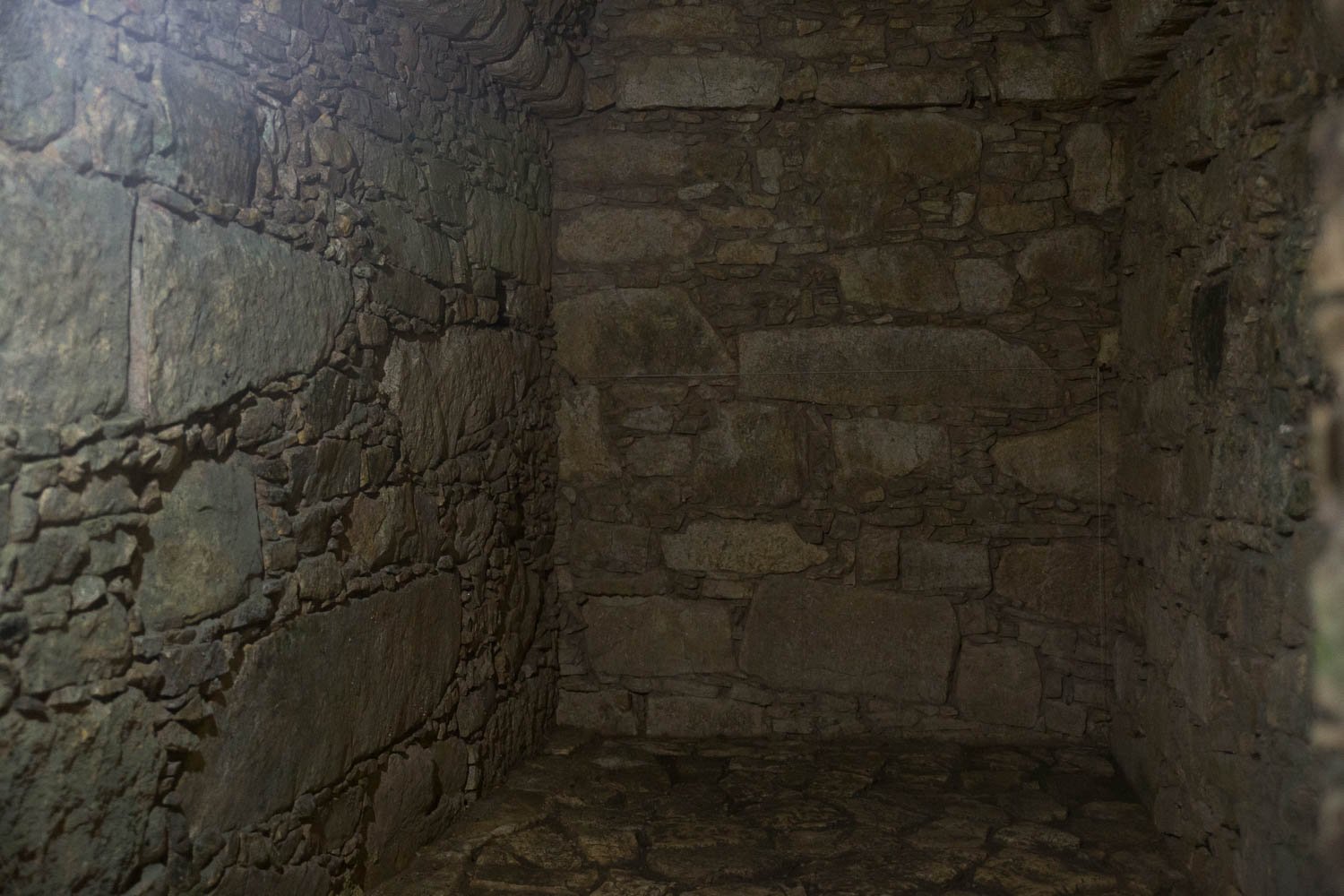 Not as interesting as it could be.

But over all, Palenque is a well restored interesting set of ruins to visit. With large temples, a complex ‘Palace’ replete with courtyards, passageways and carvings, as well as an ‘observatory’ tower. The Palace at Palenque.

So despite the complete lack of opportunities to explore ancient royal burials, the ruins at Palenque were some of the most interesting we visited.

Temple from the Cross group.

View from the Cross group.

View from the Cross group.

A short walk to the outskirts of the ruins.

The trees swallowing the ruins remind us of Cambodia.

A final glimpse of the ruins before departure.

A final glimpse of the ruins before departure.

But walking into the open jaws of a monster was just that little bit more memorable… sorry Palenque! 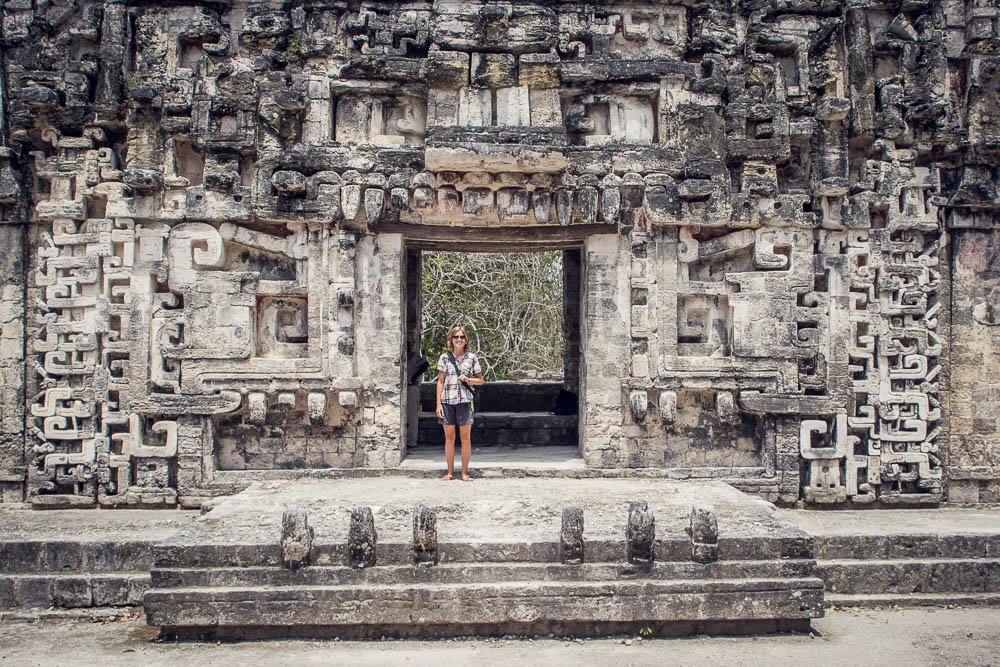 Taking notes for when we build our own house.

Anyway, enough with the ruins. Next blog post: Not ruins. Stay tuned!