Let there be LED light! 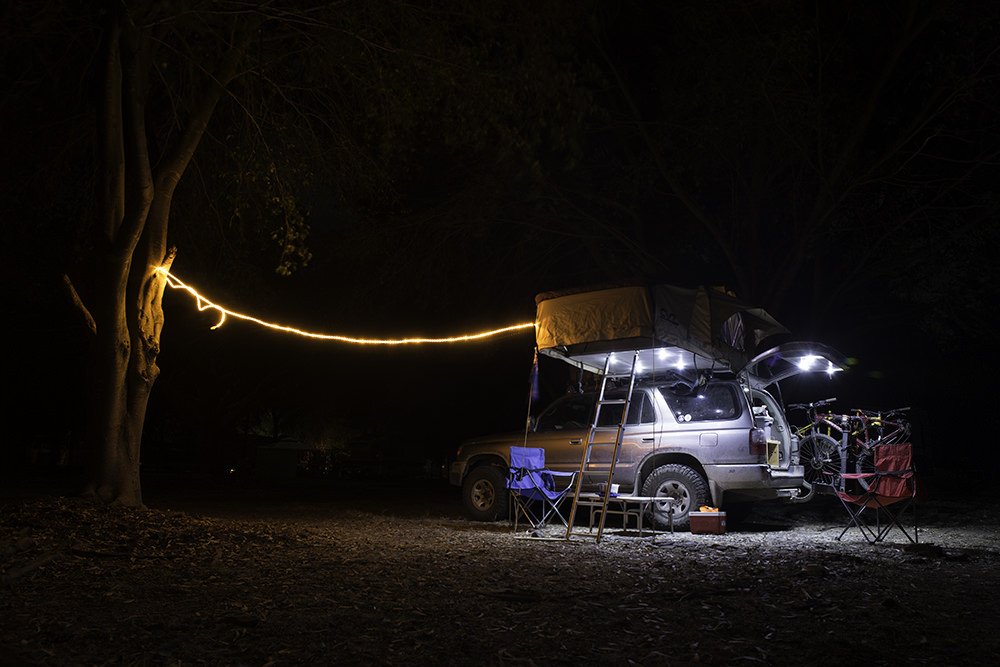 After spending the best part of two months in Alaska and Canada we were used to having plenty of daylight as we setup camp and prepared the evening meals. Unfortunately, as we headed further south, the nights got darker and we were forced to start using our head-torches.  It wasn’t long before we realised that our head-torches and our single underpowered lantern were not going to cut it for lighting our camp sites.

We tossed around a few ideas and decided that the areas we wanted to light up were the area under the open tent, under the open rear door and also something inside the tent. Any lights we installed would be wired into the second battery, which was already close to these locations in the back of the car. 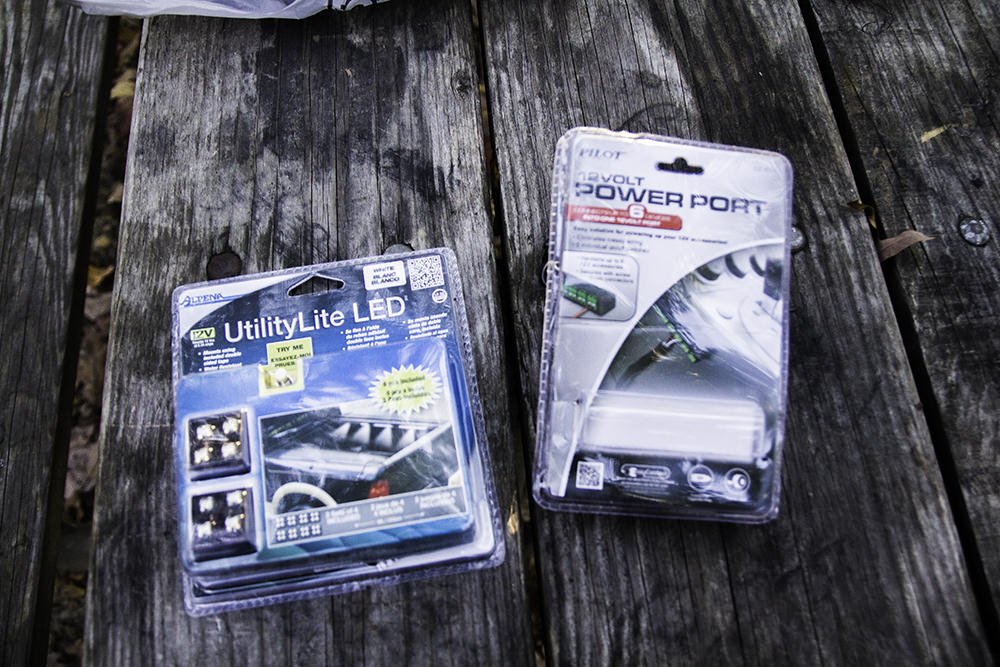 We spent a bit of time researching online and browsing the shelves of the closest Walmart/Autozone. We chose a set of 8 LED lights sold as a kit intended to light the tray of a truck bed, a set of twin LED strip lights to go inside the tent and a switch (Power Port) to wire them into. 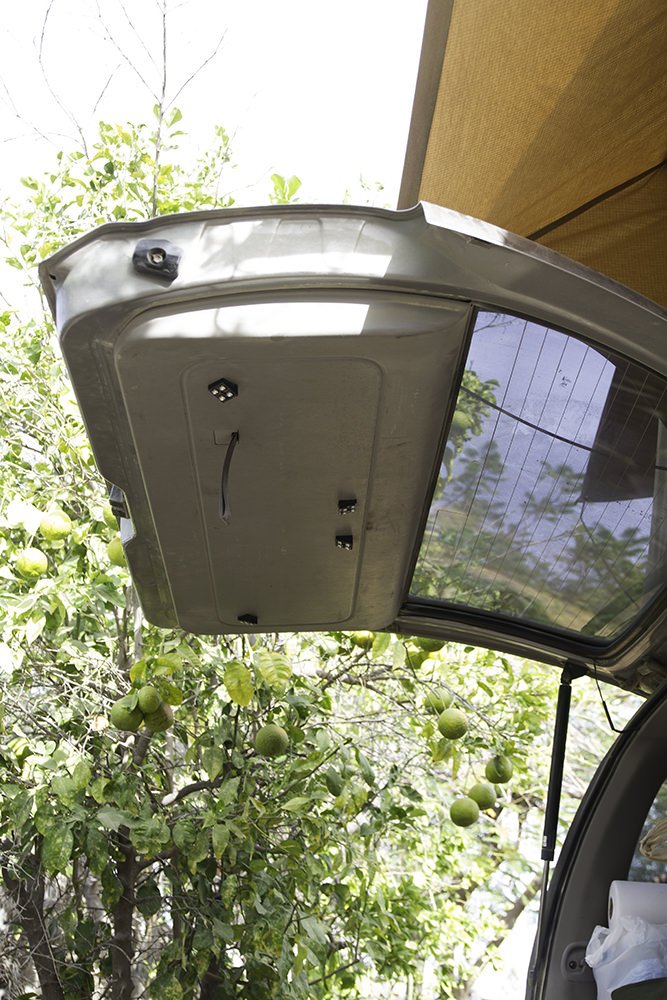 First half of the LED light kit installed in the rear door panel.

We split the kit into two sets of four. One set for the back door and the other under the tent. To keep things tidy we ran the wiring for the lights in the rear door behind the panel. Each light block came with a mounting screw and a double sided adhesive pad, not sure what the adhesive is—but these things are on for life! Each light is a set of four LEDs and are set at a slight angle, we suppose because they were designed to shine down into a truck bed. 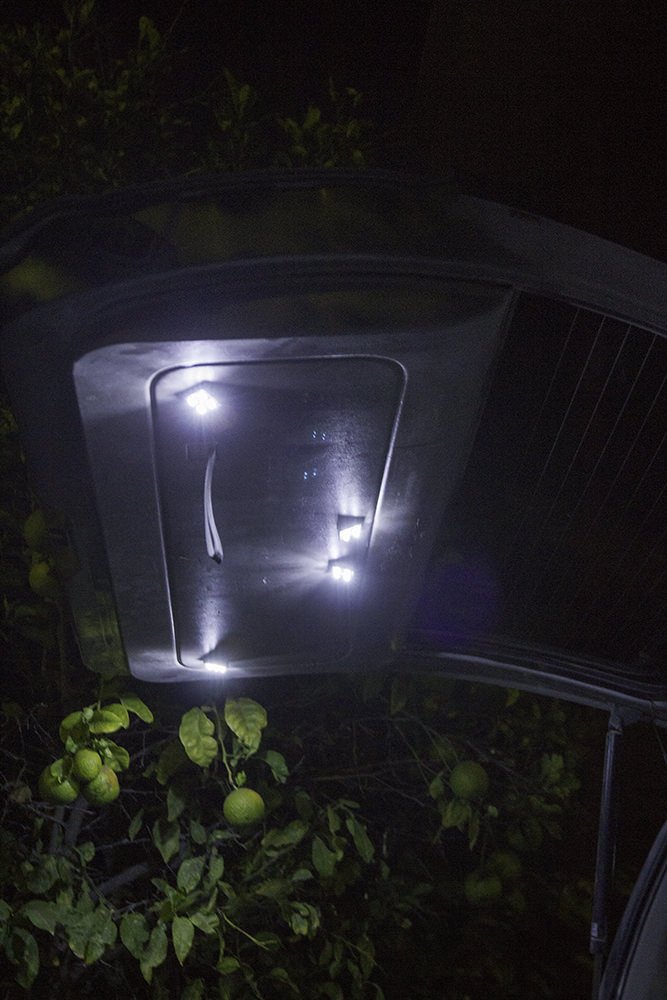 We positioned two to point away from the car at 45deg and the others we pointed one into the back of the car and the other away from it. Doing this meant we could light up a large area under and around the rear door. 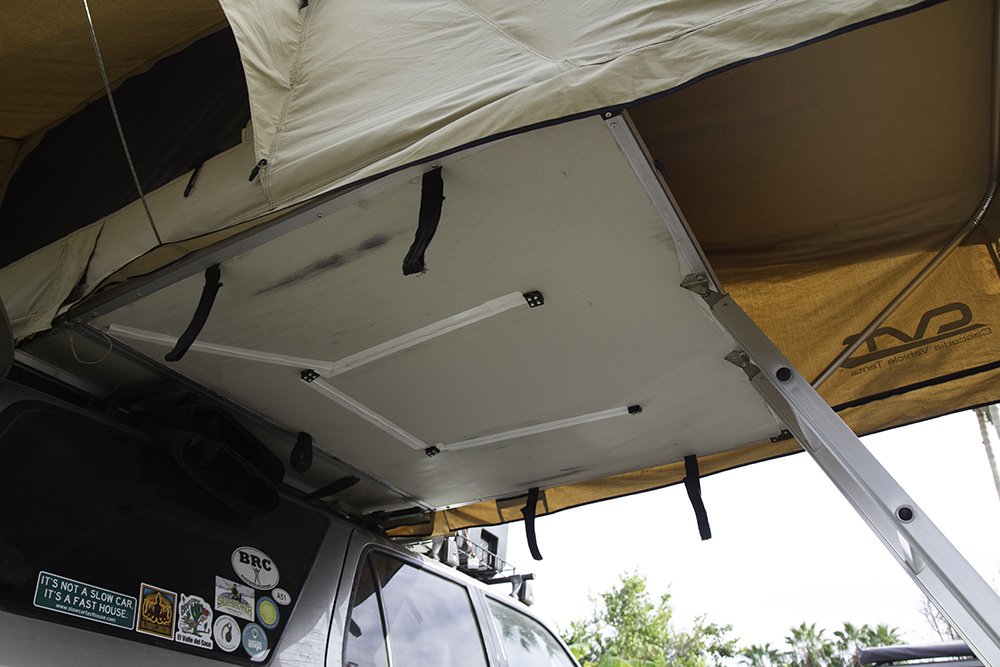 The rest of the light kit mounted on the underside of the CVT tent.

The remaining four lights from the kit were mounted on the underside of the tent. Unfortunately we couldn’t run the wiring through the tent base, so instead chose to stick the wiring down with white duct tape. The idea here was to camouflage the wiring. However, after a few weeks it became quite obvious, especially with the dirt and dust that stuck along the edges of the tape. 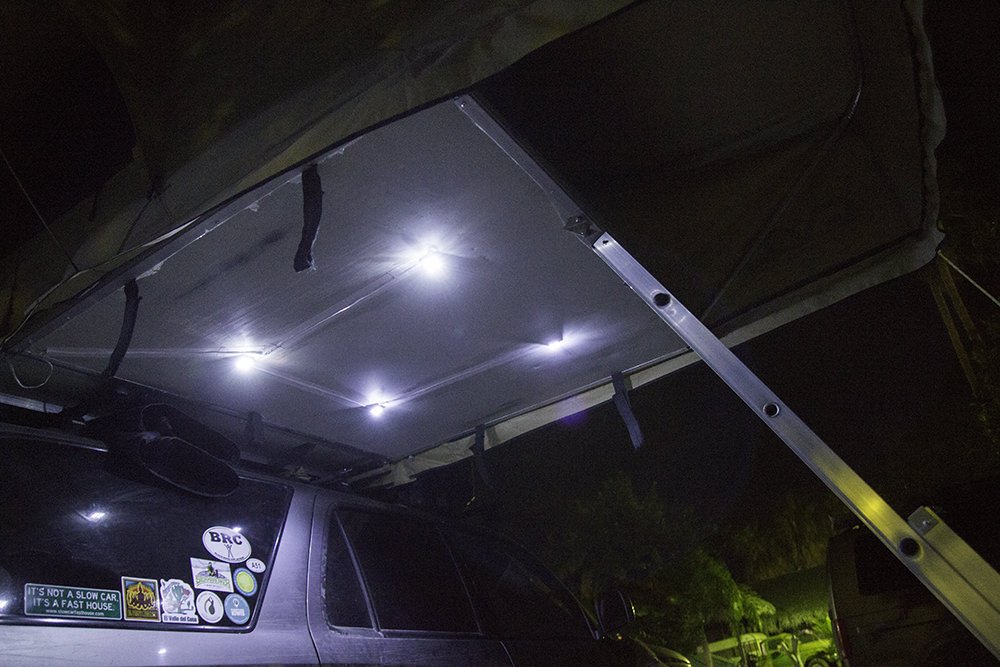 Underside of the tent lit up.

We positioned the two lights nearest the car to point away from the car and the furtherest two to point either side of the tent. Again, by doing this we managed to light up a larger area than directly under the tent. Also, these lights do a excellent job of lighting the annex when attached. 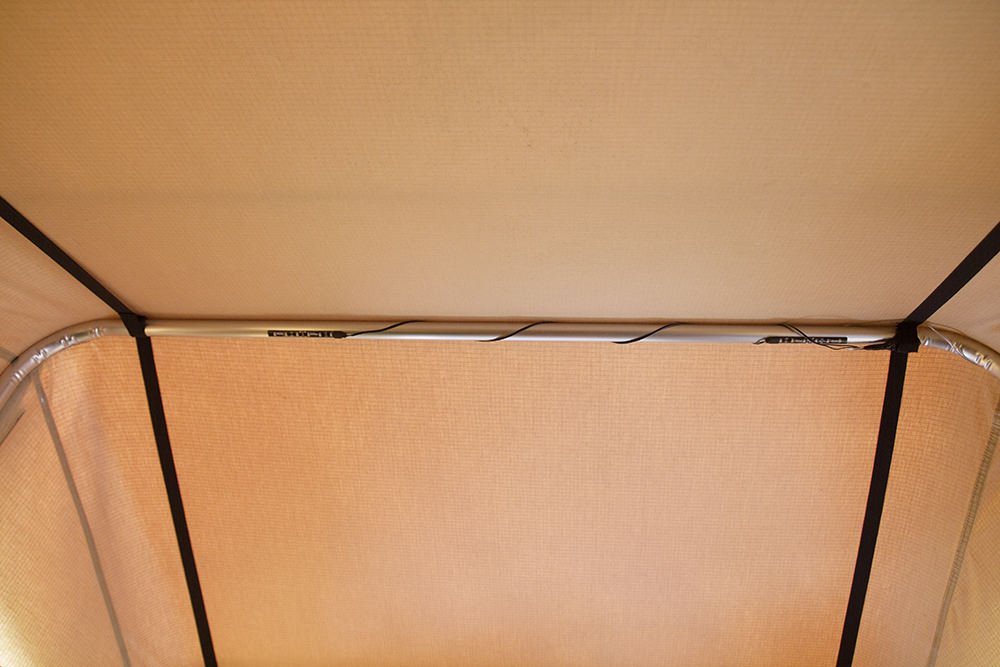 For the lights in the tent we simply stuck them directly to the supporting bar that runs over the middle of the tent and ran the wiring down the side. 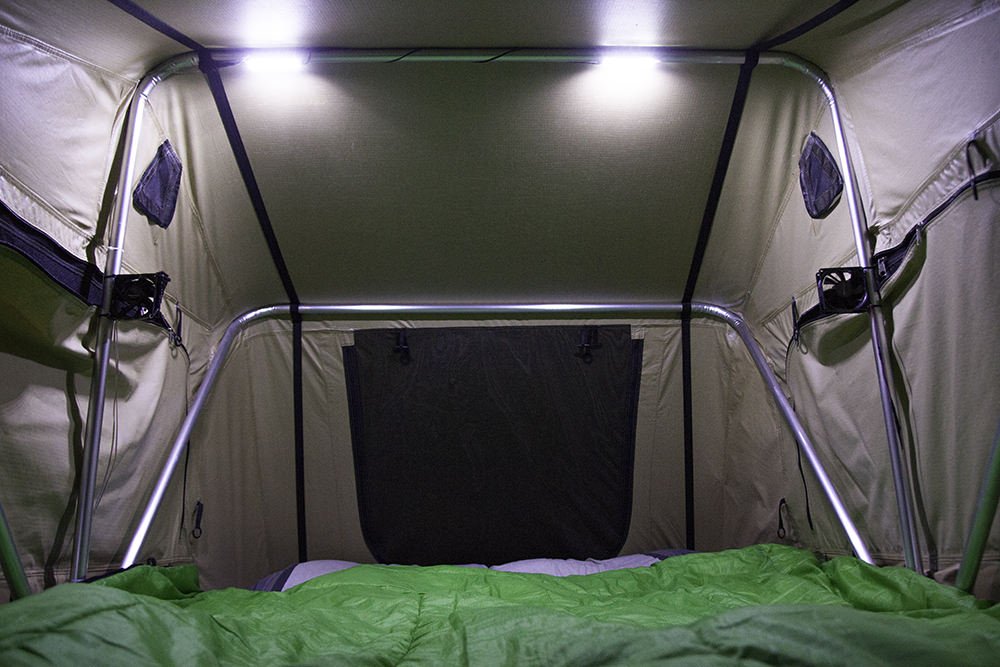 These two lights have 6 LEDs each and completely light up the tent. 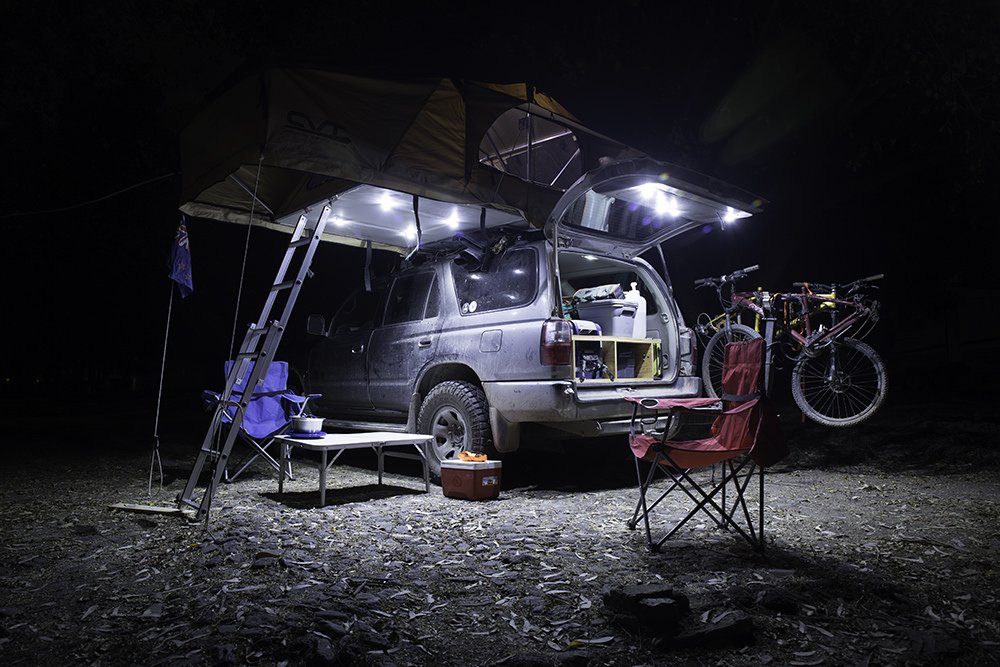 With all the lights on they light up quite a large area. 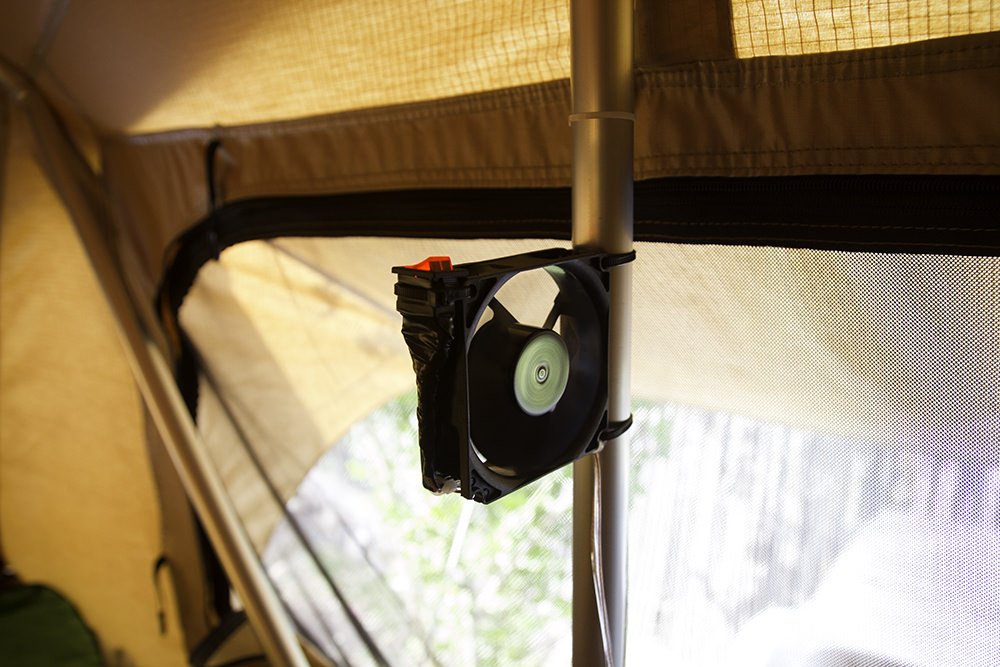 While we were at it, we had decided to add a couple of fans to move air around on those hot sticky, calm nights. We bought a couple of 12 volt computer case fans wired them up to a switch, mounted them in opposite directions from each other—and just like that you have your own wind machine. They are mounted to the centre tent support by zip ties for a couple of reasons; the fans can be slid up and down the pole—and we had zip ties. 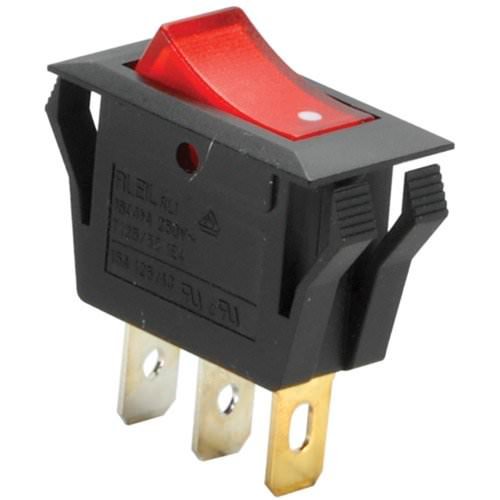 Switch, used one each for tent lights and fans. 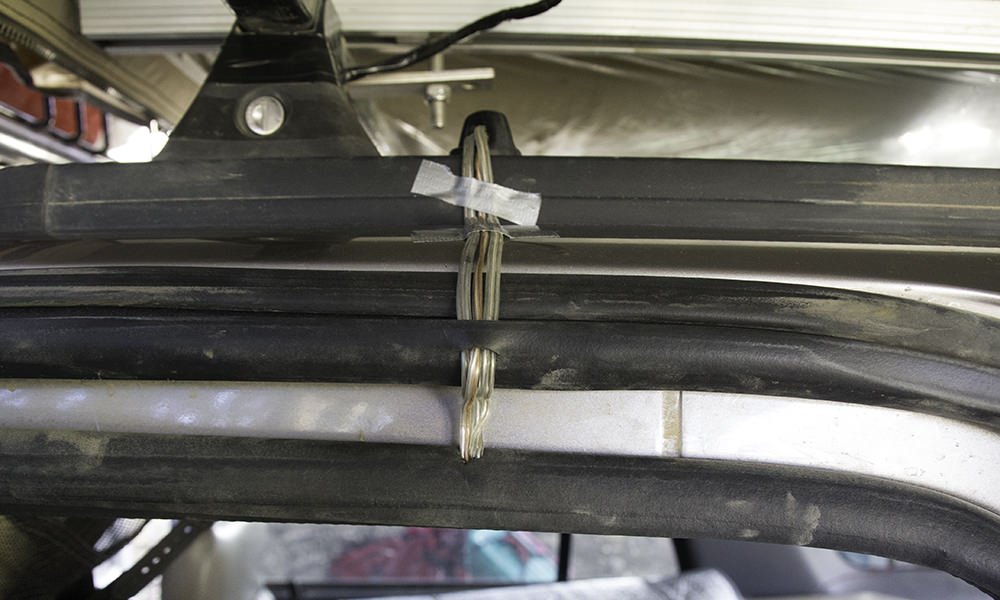 Wiring coming from the tent into the car.

The wiring exits through a hole in the base of the tent and down through the driver side rear door. The wiring then runs inside the door seal down to the Power Port switch. 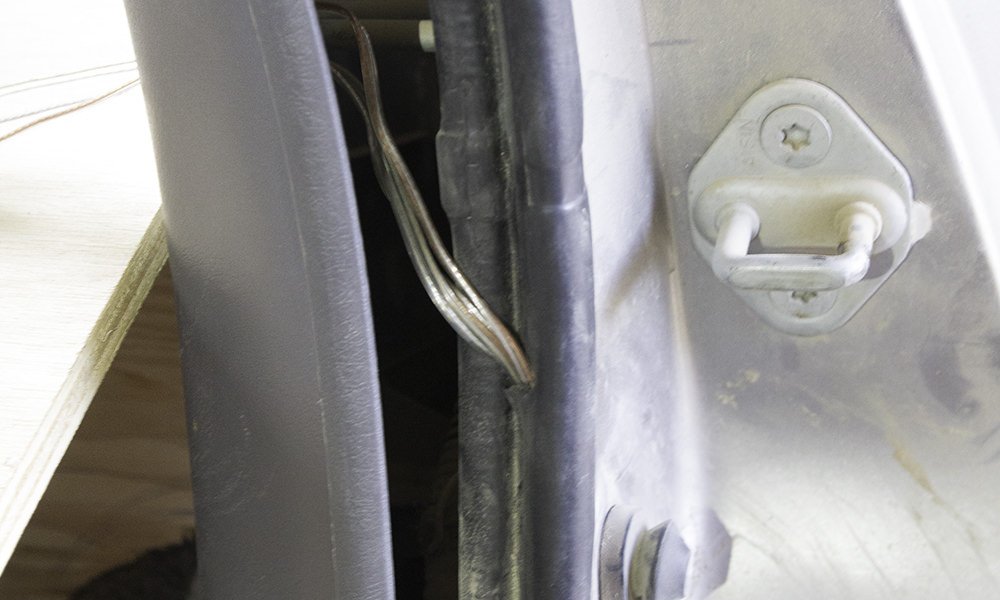 Surprisingly there are no water leaks, or at least we haven’t been in enough torrential rain to really see if we compromised the door seal.

Originally the tent was mounted to open to the passenger side but since the bike rack also opened to that side it made sense to turn the tent around to open on the drivers side. This means our camping area no longer has a bike rack in the middle of it. At that time the tent wiring entered through the back door and ran behind the plastic linings to the Power Port switch. 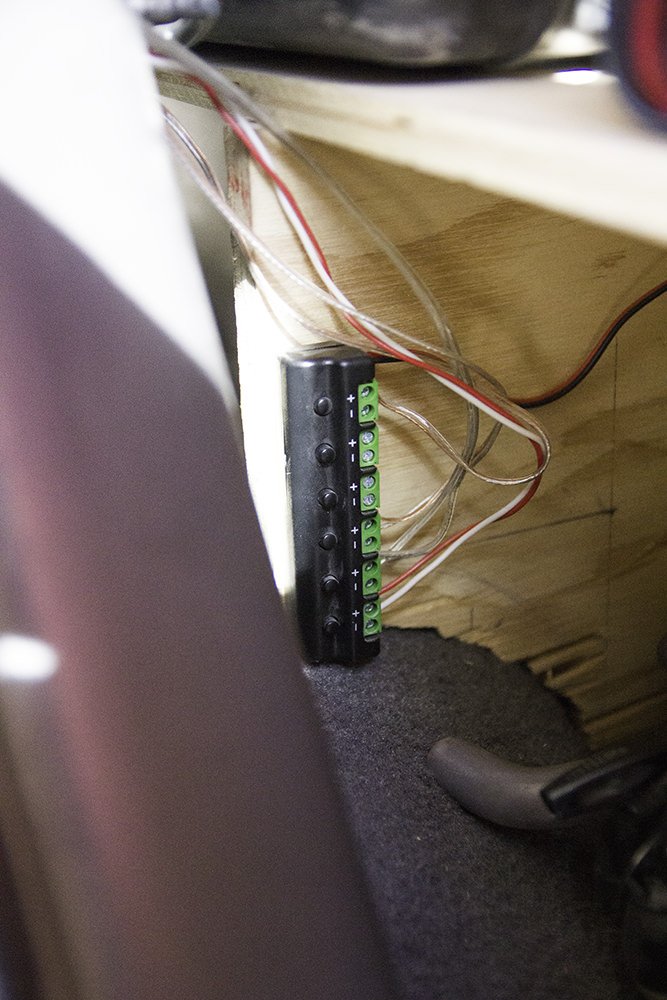 Power Port installed and wired in.

The lights and fans are wired up using 18-gauge speaker wire. They all come to the Power Port which is mounted to the storage platform inside the rear door of the car. The Power Port is then wired directly to the second battery.

All lit up. All of the lights on.

We also invested in a cheap set of christmas lights to string up when we need that extra bit of light over a picnic table, etc.

Without the correct tools we can’t measure exactly how much power the LED lights use but we can say the lights under the backdoor, tent and inside the tent use almost nothing. Although we haven’t done this we imagine these could be left on for days before draining the battery enough for it to be a problem. The christmas lights however are a lot more power hungry and will flatten the battery in 4-5 hours, maybe because they run through the inverter.

However, we have gone from dark nights with just our head torches to light up the place to brightly lit campsite.