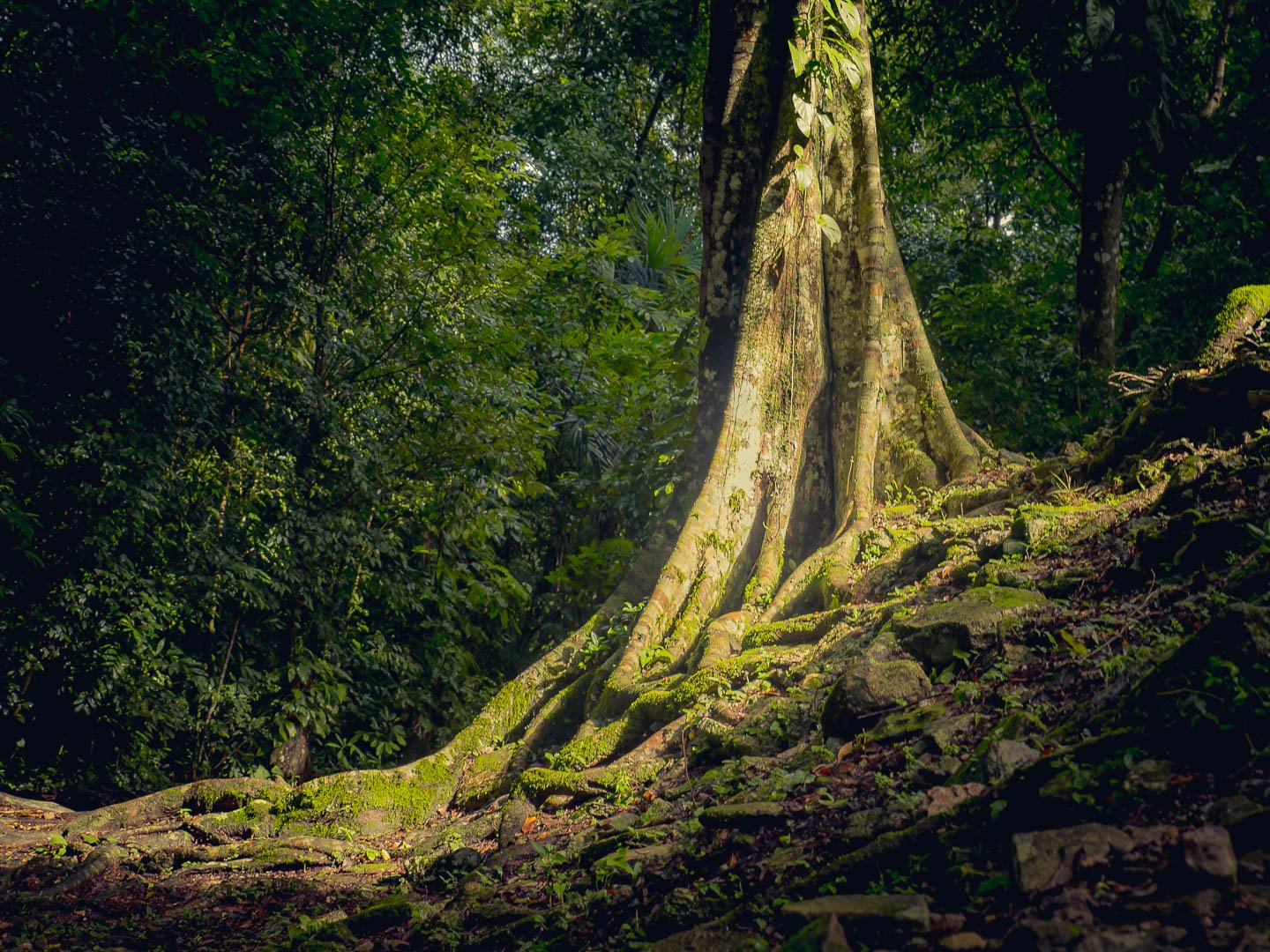 We’ve never been accused of driving the most direct route to get somewhere, so why would this be any different?

When you look on a map, at first glance it looks like Yaxchilán ruins ought to be in Guatemala. Thanks to a sneaky curve in the Usumacinta river, they can be found in Mexico instead. 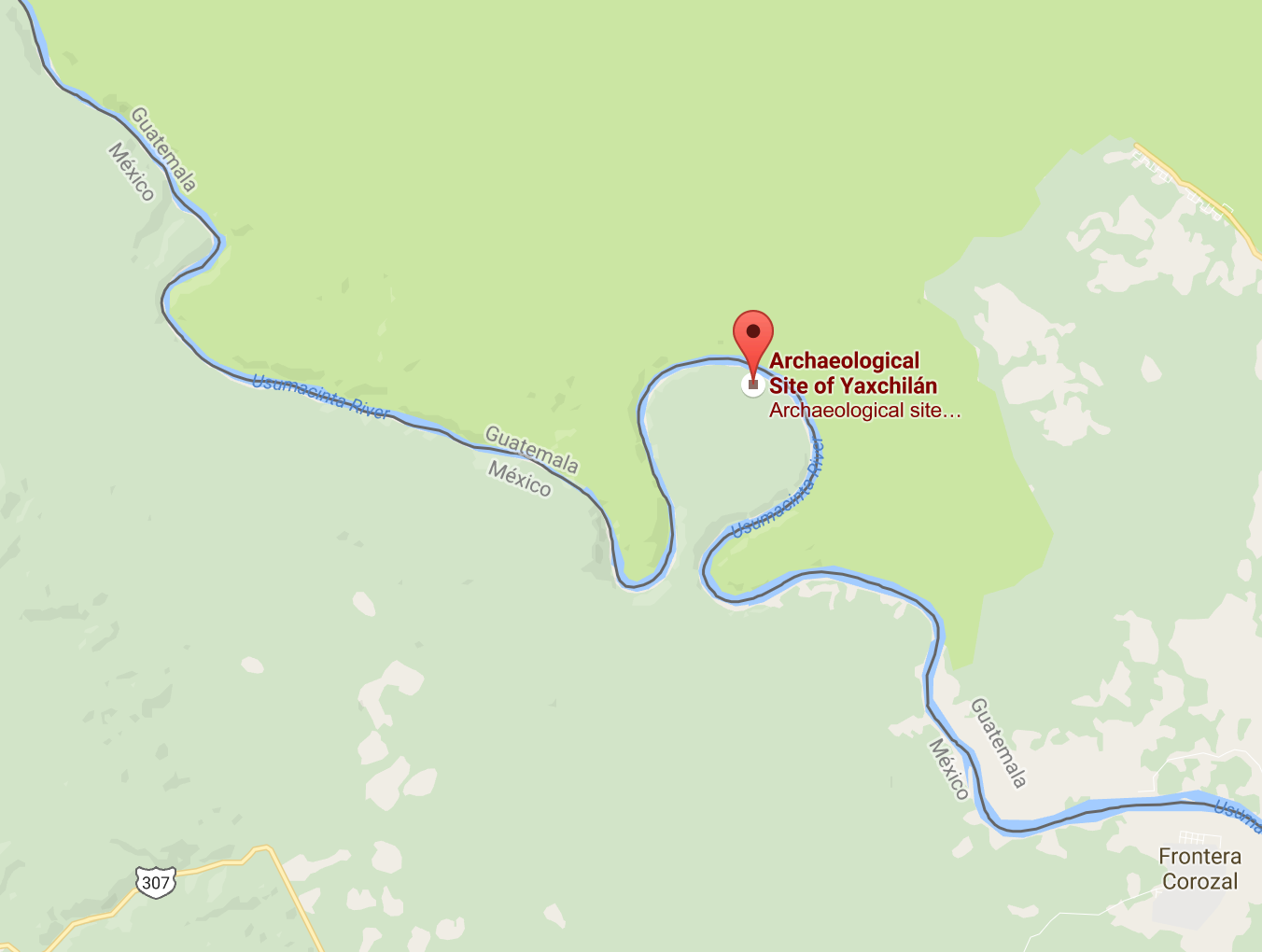 However, visiting these ruins isn’t as easy as just driving up to the entrance. You instead must drive to Frontera Corozal, then catch a boat down the river to the ruins. We set up camp near the boat ramp with plans to catch the first boat heading to the ruins the next morning. 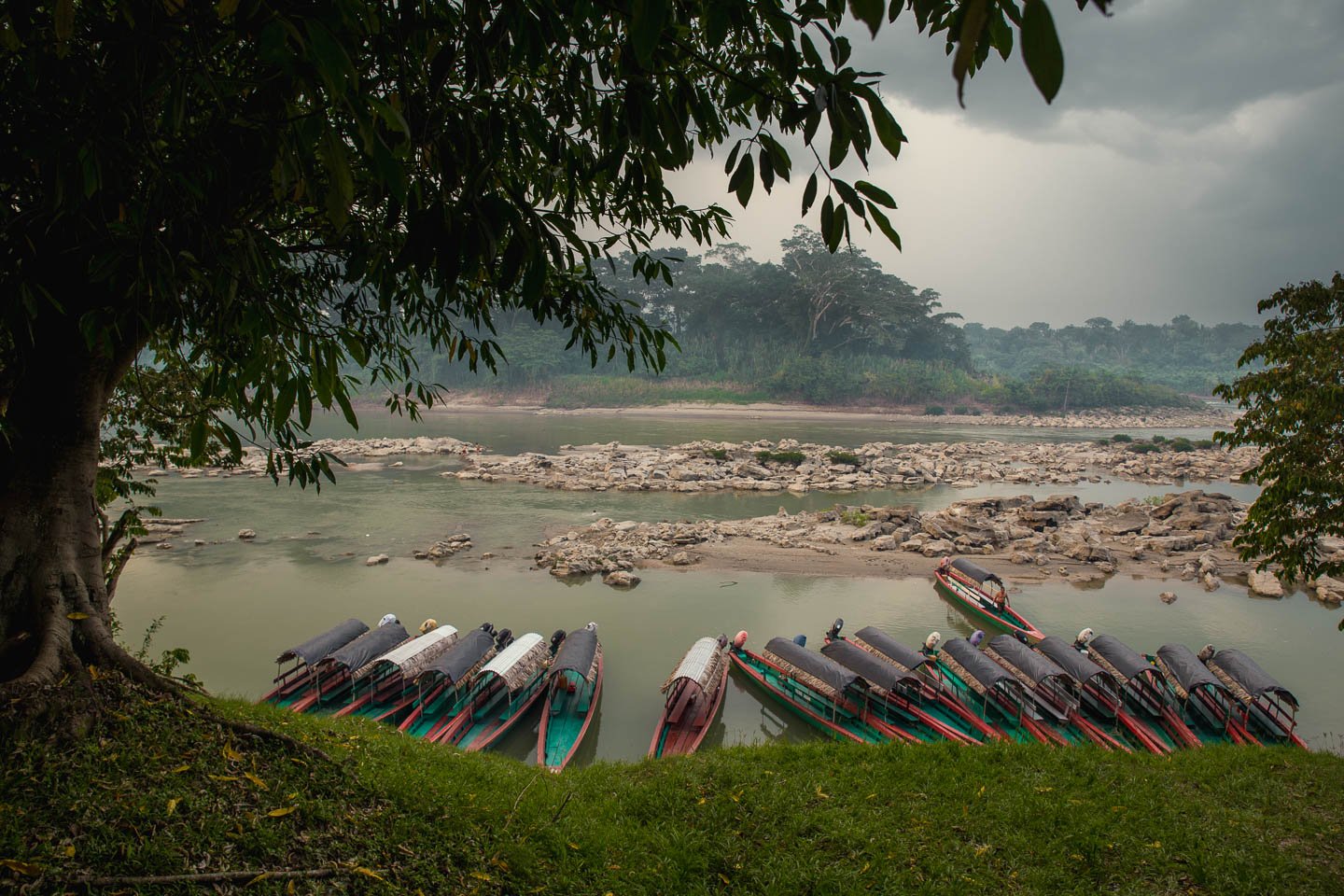 We spent the evening watching thunder storms roll across the jungle over the other side of the river.

We sat on the river’s edge and watched the storms rumbling away on the other side of the river—in Guatemala. We figured the thunder and rain were in a completely different country than us. We didn’t need to worry about them.

Two boat captains who had been relaxing nearby on the river bank walked past and we wished them a good evening. They wished us a good evening, then politely mentioned that it was about to rain, so we might want to move.

How right they were, as we made our way back towards our tent, the rain started. When I say rain, I mean unbelievably heavy torrential downpour, the kind of rain where walking is a lot like swimming.

The poor tent was still far from waterproof. Despite the entire 1 1/2 bottles of waterproofing spray we had unleashed on it only two weeks earlier.

We had gingerly tested it in lighter showers of rain and it held up fine. We foolishly thought that not only had the abundance of spray worked, but that it wasn’t going to rain much that day. We had boldly pitched the tent with only the rain fly—without the usual tarpaulin.

By about 3am we were huddled together in the centre of the tent, despite the stifling heat, contorted and uncomfortable, trying to avoid the worst of the water pouring its way through the ceiling, the walls and the doors.

After a damp, sleepless night we were about as unexcited as any person could be about our planned excursion to see the ruins. But the skies cleared, the morning sun shone on our drenched tent. We draped our pillows and blankets about strategically in the sun and wandered down to the boat ramp.

As it happens, a jungle boat trip to ancient Mayan Ruins is all that is necessary to put smiles on your faces after a sleepless night.

Well, that and coffee.

We were pleased to find that we were the first visitors to the ruins for the day and had the ancient, mysterious location all to ourselves.

Now you might be thinking that we had already seen a whole lot of Mayan sites. You may ask why we would go out of our way too see more.

But I assure you that it was worth the detour.

There we were, just the two of us, alone in the jungle. It felt like we were miles from civilisation. Surrounded by crumbling ancient stonework. The air hung thick about us. The damp smell of fallen leaves mingled with the scent of a forest purified by the recent rain. The memory of the previous nights raindrops still lent a coat of splendour to the ancient stones of the temples.

The sound of the jungle engulfed us. From mysterious rustling in the undergrowth to the distant, guttural roar of the howler monkeys. We caught glimpses of toucans hopping about in the branches above, strained our necks to watch the acrobatics of the spider monkeys. Almost out of sight, these nimble creatures danced in the highest branches of the towering, ancient trees. 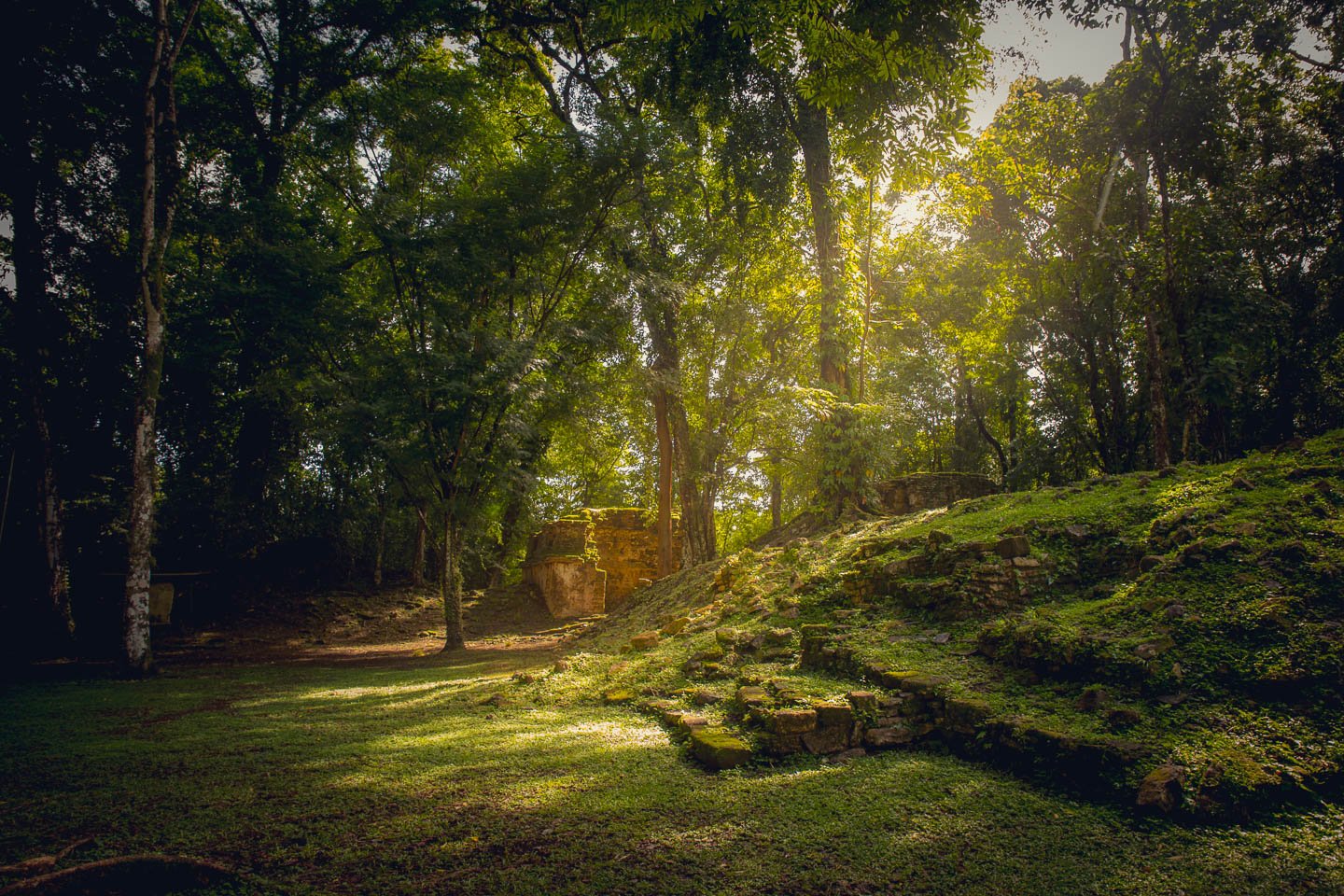 The trees alone were spectacular. They dwarfed us like Jurassic giants. Warm patches of early morning sunlight broke through the weak spots in the jungle’s thick armour of leafy canopy. The dappled light bathed the twisted roots of these trees in a mysterious fairy-tale light. We knew this was not a place we were going to forget. 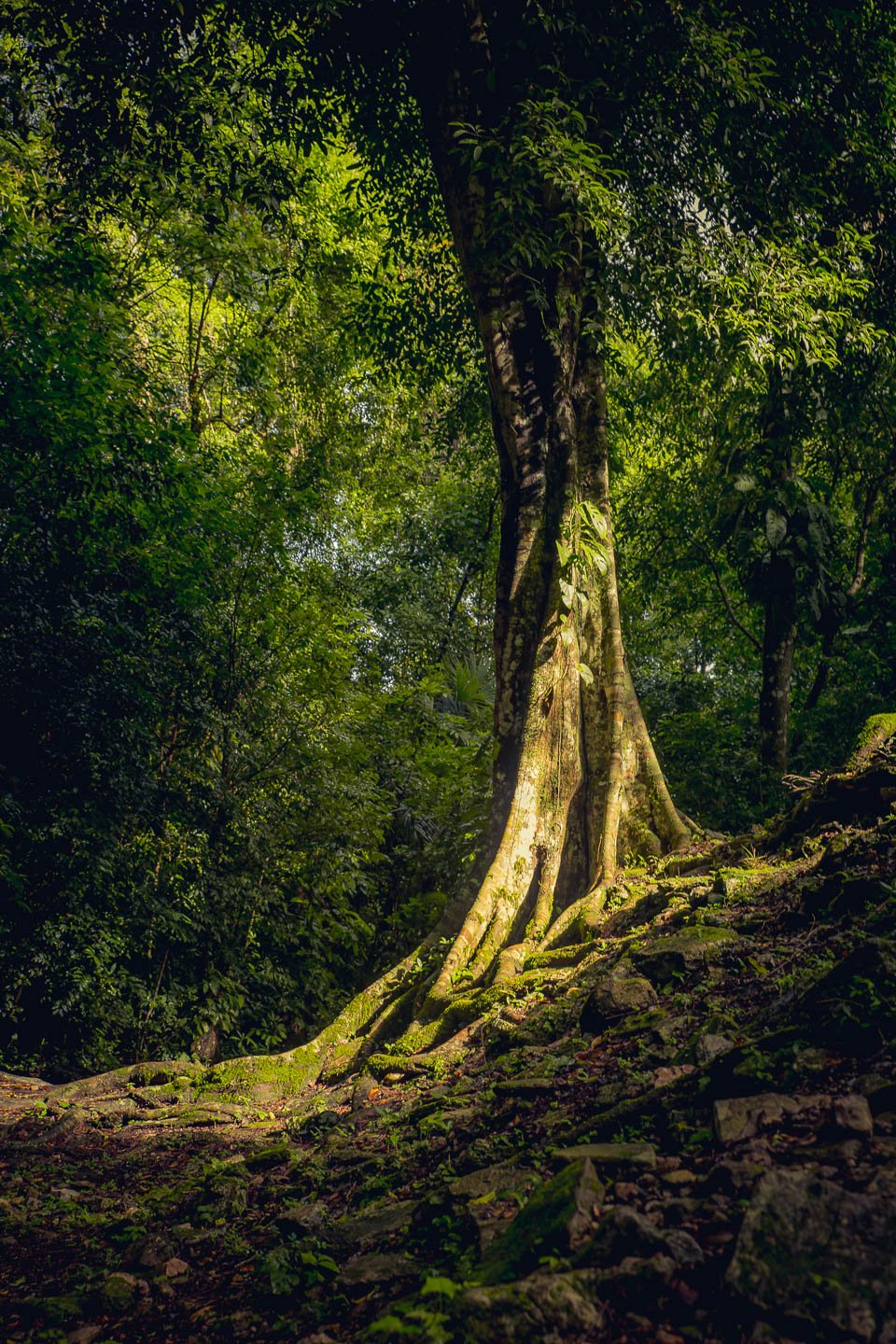 Of course. It isn’t all sunshine and lollipops in the jungle. There’s also big-arse spiders. 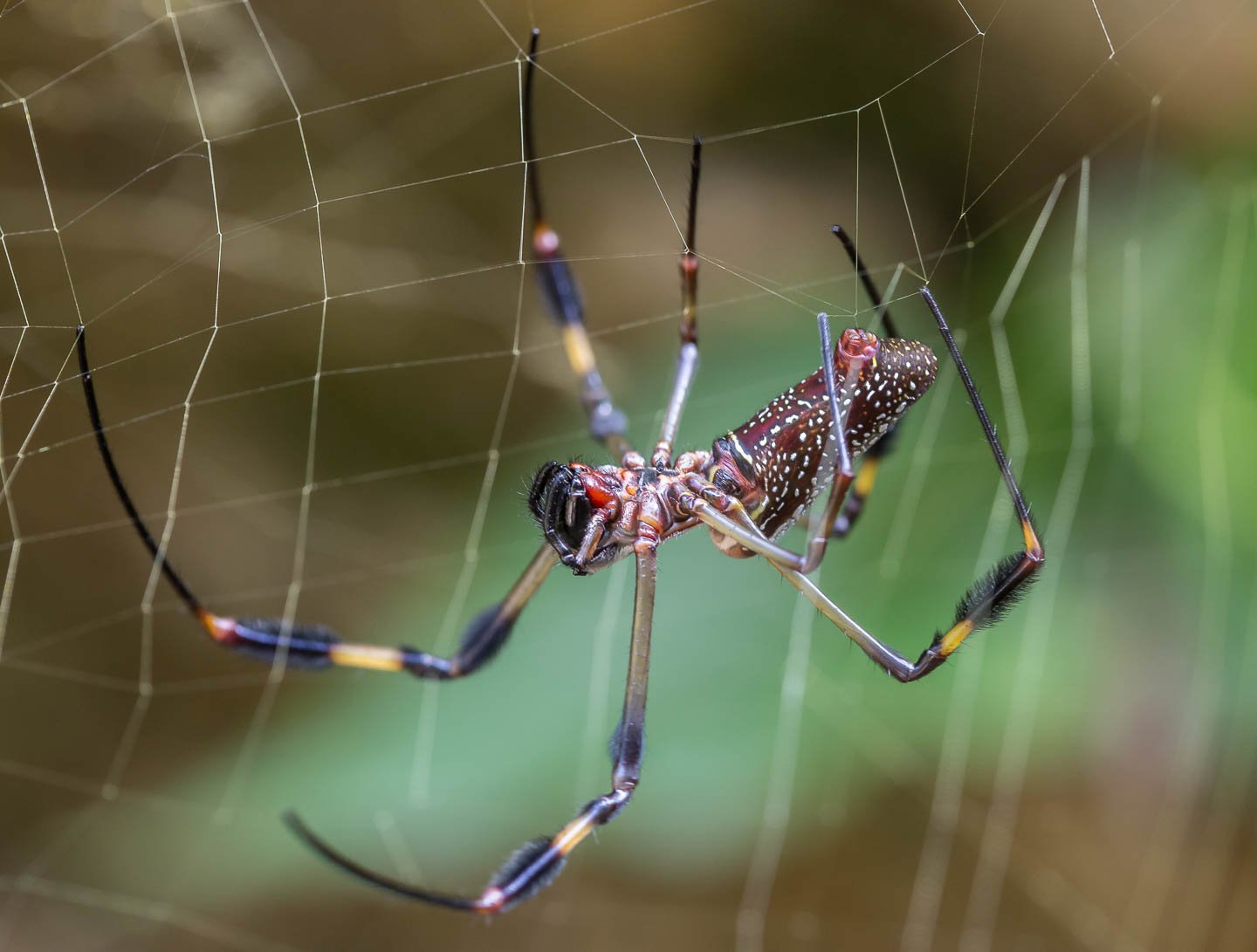 You might think this guy is a monster, but that is because we didn’t get a photo of the beast that lurked within the ‘Labyrinth’. A section of ruins with interconnected doorways that you can explore at your own peril. 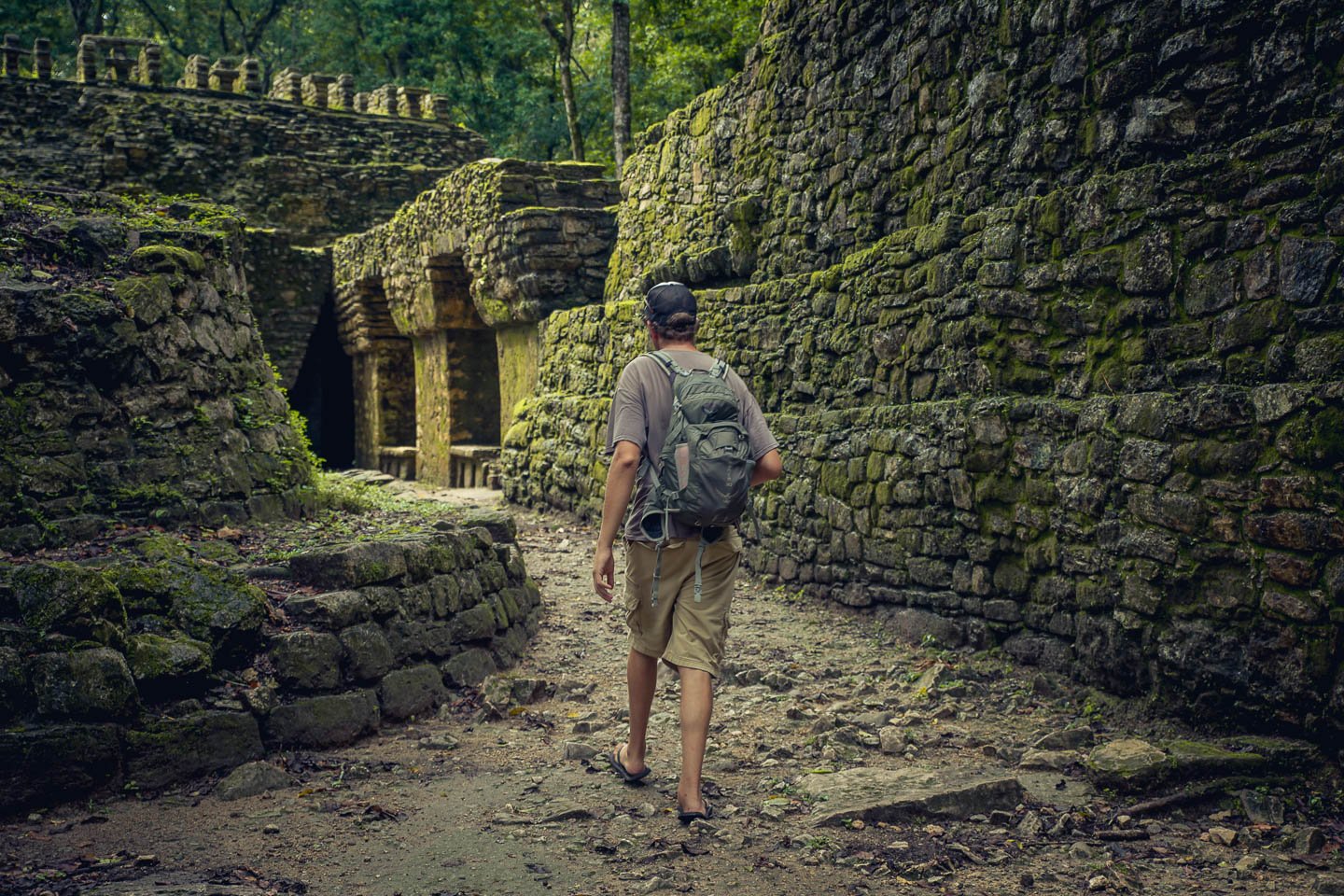 We stepped in to the darkened doorway. Directing the weak beam of our only torch towards the first corner, we saw a flash of movement. On an edge of a vaulted arch, lit by the feeble glow casting wavering, monstrous shadow. An eight-legged hell-beast that can only be described as terror incarnate. The size of a horse and much faster.

Quick, shine the light back on it.

We immediately ran back outside like the cowards we are and swore never again to enter a spider filled labyrinth before lunchtime. 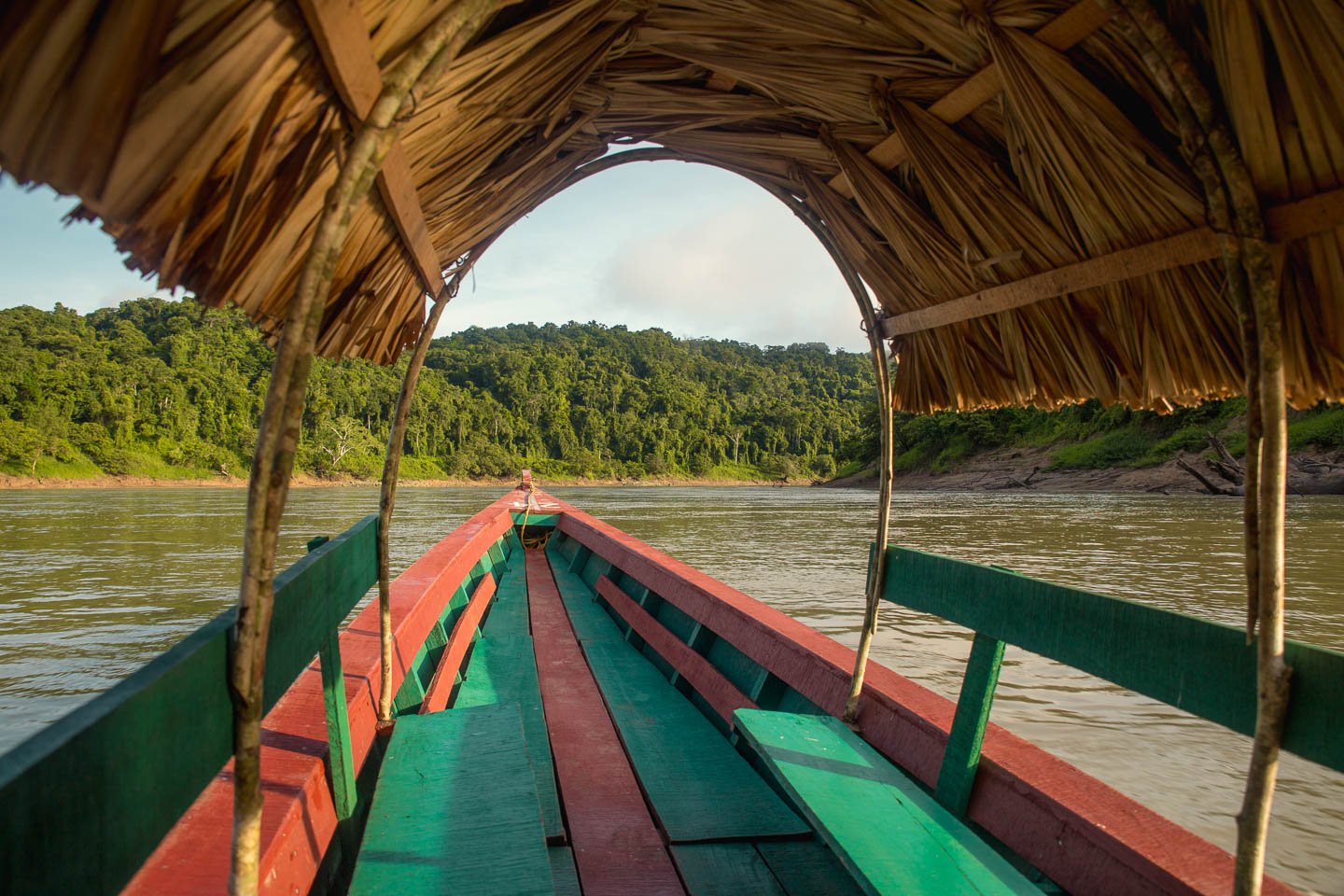 Can you wring a few more horsepower out of this boat? We want to put some distance between us and our worst nightmare.

Hoping that the next set of ruins had fewer arachnids, we hopped back on the boat, back in the car and drove a few kilometres down the road. We hoped that would put enough distance between us and the eight-legged hell-beast that she would be unable to devour our souls.