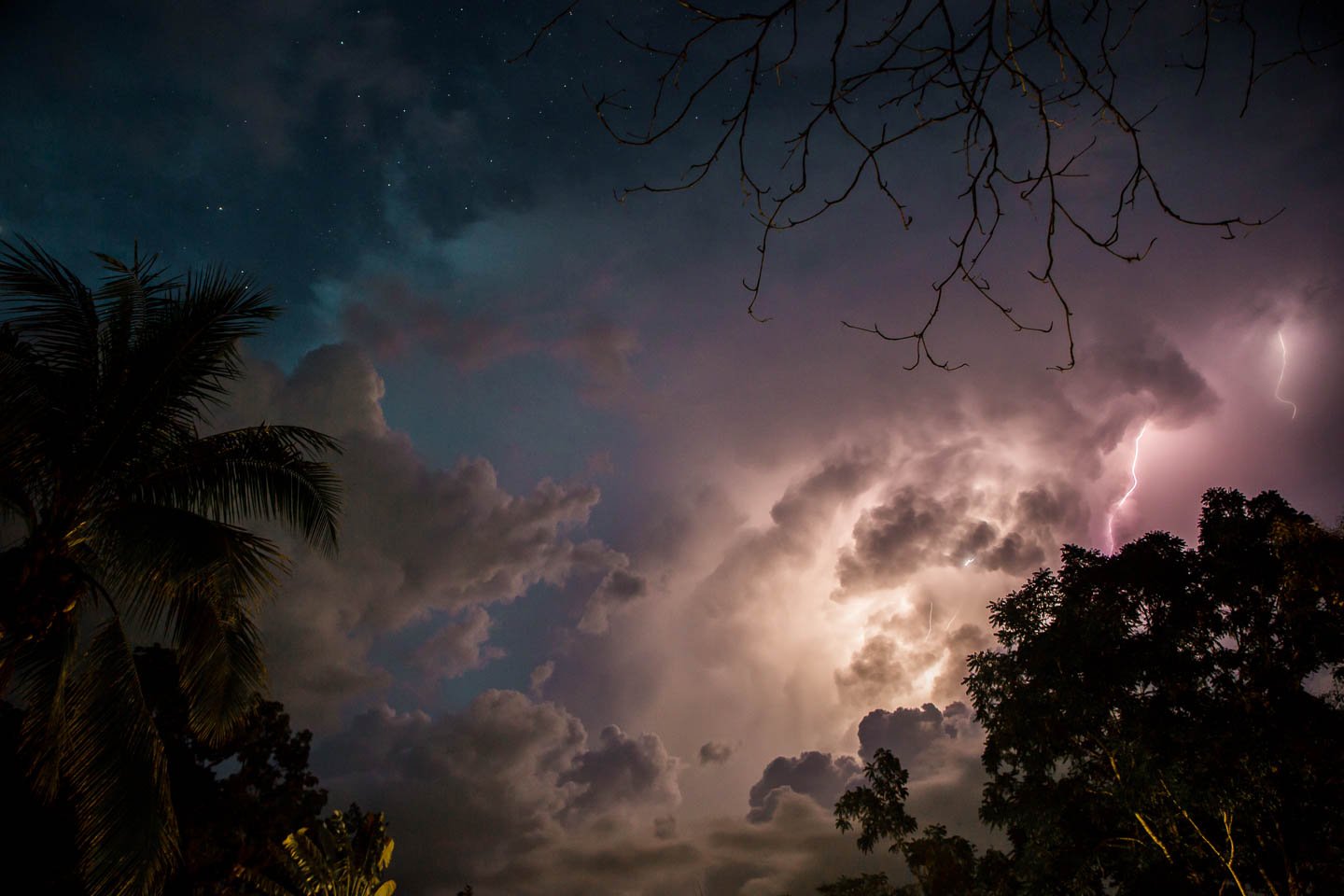 We promise. No more dilly-dallying. This is the one where we cross the border to Guatemala. Finally.

After escaping the terrifying arachnid of doom in Yaxchilan we were shaken, but not put off the idea of exploring more ruins.

We drove towards the nearby Bonampak ruins. 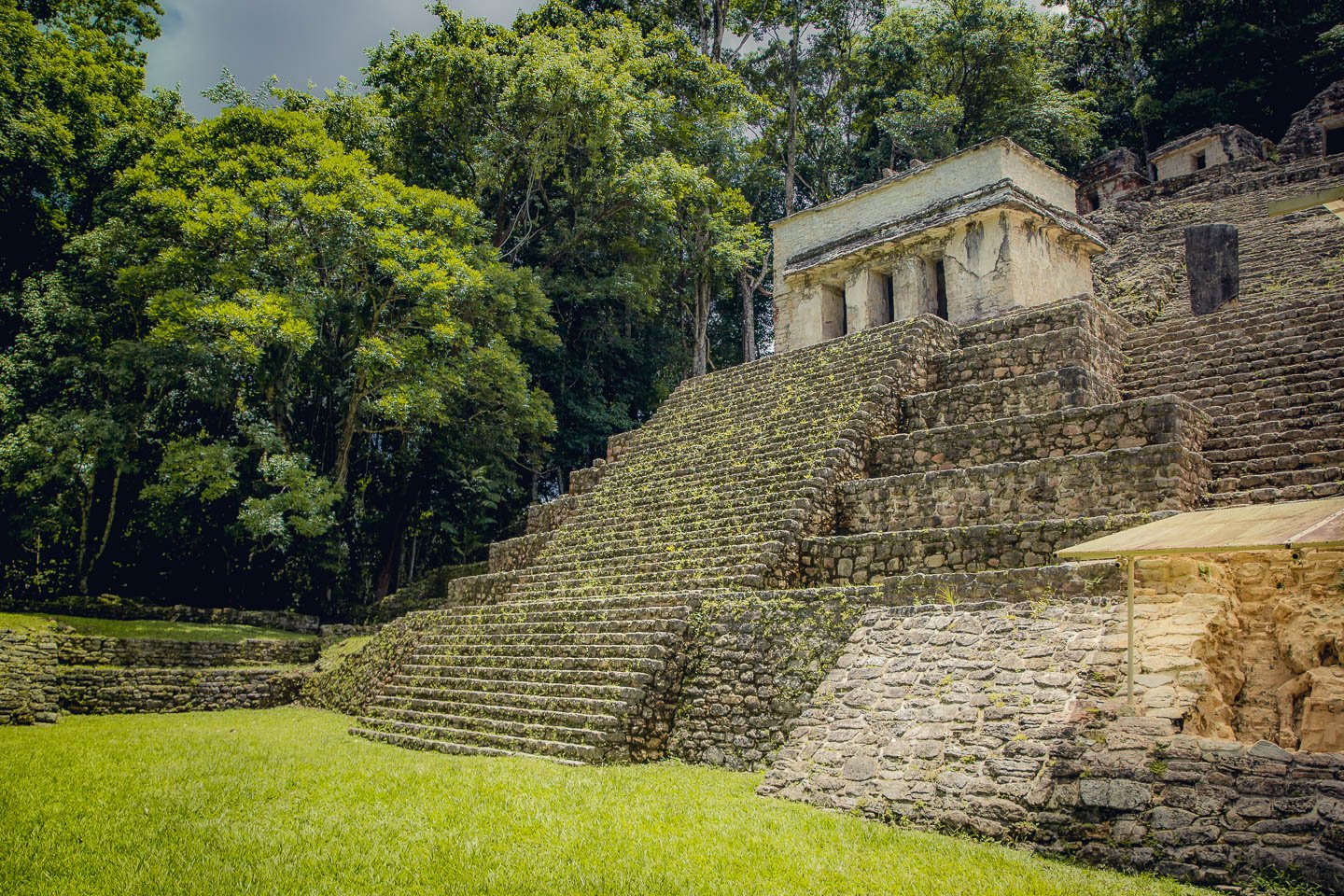 We then discovered that it is not possible to drive to these Mayan ruins yourself. You can get pretty close, but a short distance out, you are obliged to stop your car and hop in a local ‘taxi’ for the last stretch.

This isn’t because the road is treacherous and hard to navigate, it is just a short drive on a flat but winding entrance road. It is essentially one of the various tolls set up by the local Lacandon Maya. Like many places we had visited, these tolls are intended to redirect some of the tourist dollars back to the local communities. These communities often see none of the profits from outside investors or the government selling tickets to their places of historical and cultural significance to eager tourists.

Think of it like someone taking your backyard, building a luxury hotel there and then having the traffic drive through your front yard to get there, but you know, imagine that the back yard was important to your heritage, perhaps been in your family for generations, since time immemorial… You begin to see why we’ve never been too phased about paying these tolls.

But being driven a couple of kilometres for no reason went a bit too far.

We parked up and the skinny kid that had explained the system promised to keep an eye on the 4Runner and directed us to our driver.

Not a minute later we were roaring down the dusty road at an alarming rate.

Our enthusiastic, rotund albino driver was a memorable, jovial character. He was, however, blessed with not one, but two lazy eyes and a complete lack of depth perception. The trees were perilously close on one side one minute, then grazing the doors on the other side a few seconds later.

Look! An enormous snake in the middle of the road! Wow!

“I’m pretty sure I missed it” mumbled the driver, who hadn’t slowed one little bit. Nor had he swerved any more than usual. He turned his head to see if he could see it on the road behind us. His driving didn’t get any worse while he wasn’t looking at the road.

A quick glance out the rear window confirmed the snake’s fate just as we disappeared around the next bend and lightning pace.

To be honest, we’d have rather paid the ‘taxi’ driver to have some time off while we drove or walked to the ruins. 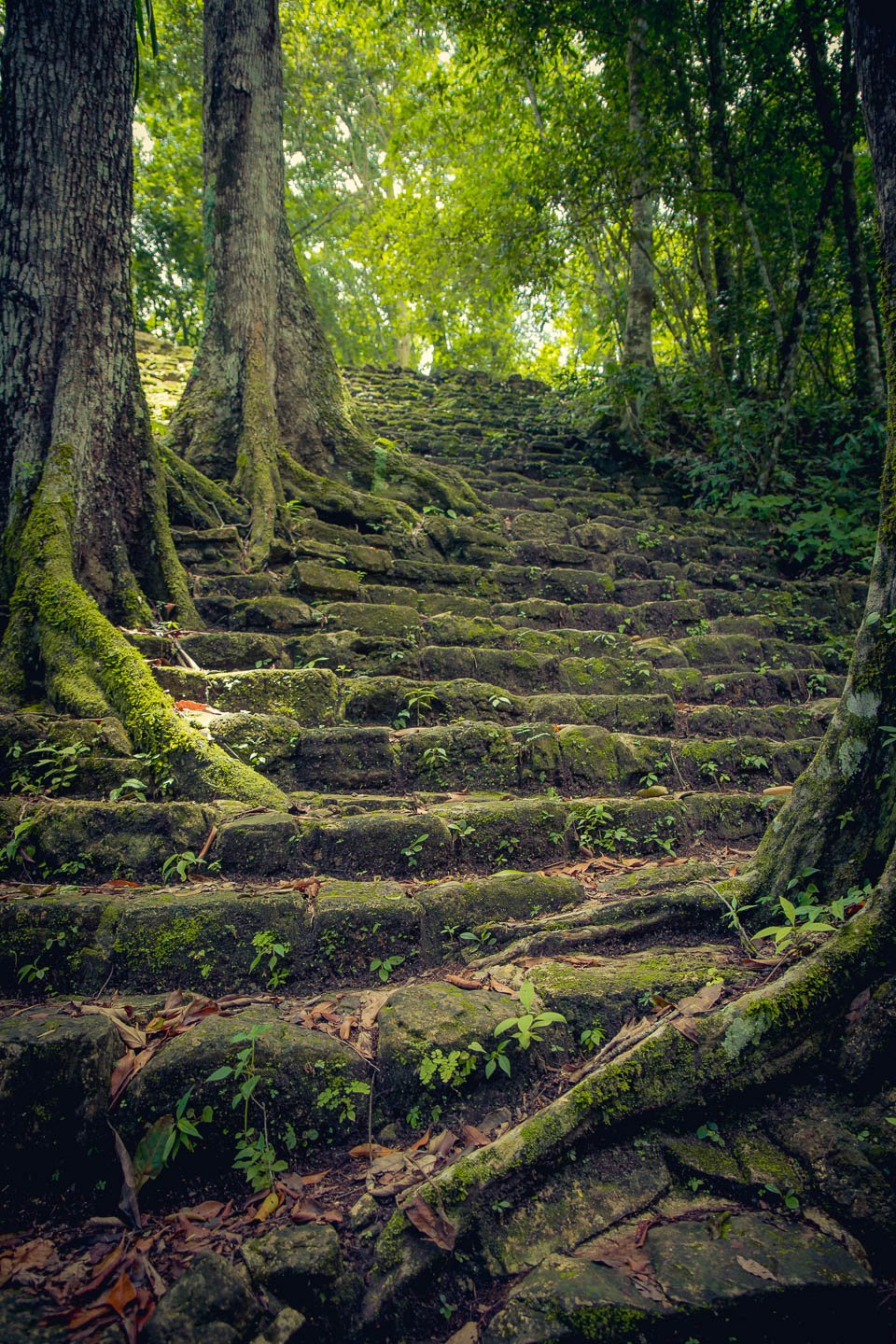 But instead the poor guy waited around to collect us an hour later and drive us back to our car. (A drive which I’m pleased to report that everybody survived, Additionally, no wildlife was killed on the return journey).

We weren’t sure if an hour would be enough. But Bonampak is actually pretty small. Just the one major structure.

It is not the exterior that is of particular interest here, either, it’s the interior rooms that still retain their original paintings. Perfectly preserved and exquisitely detailed. Spectacular.

After driving very much the long way around, we found ourselves again camping near the ruins of Palenque.

This time we were treated to a spectacular lightning show from our front porch.

I actually just had the camera set up to take a few photos of the storm clouds, so this wasn’t really intended to be a time-lapse, but it just so happens that there were enough photos to string together into a very short time-lapse to give you an idea of the scene: 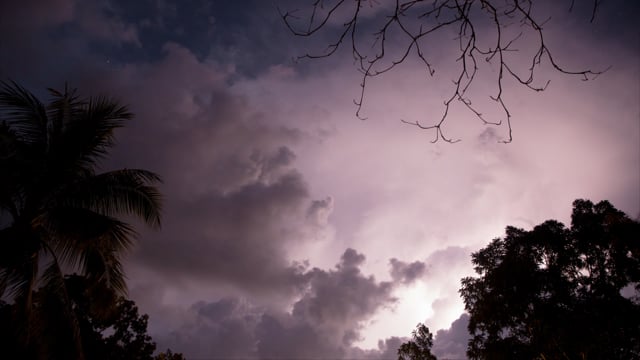 It was now time to edge a little closer to Guatemala. A cycle tourist had recommended that we take a detour to visit the falls at Robert Barrios. This was a wise suggestion.

Finally though, the time had come, we were actually nearing the border. After about 10 months in Mexico it was finally time to put Mexico squarely in our rear view mirror and head south.

We spent our last night in Mexico in the town of Tenosique. As we walked along the river-front and watched our last sunset in Mexico, we reflected on how fantastically, amazingly stupendous this country had been. We were already making plans to come back—and we hadn’t even left! 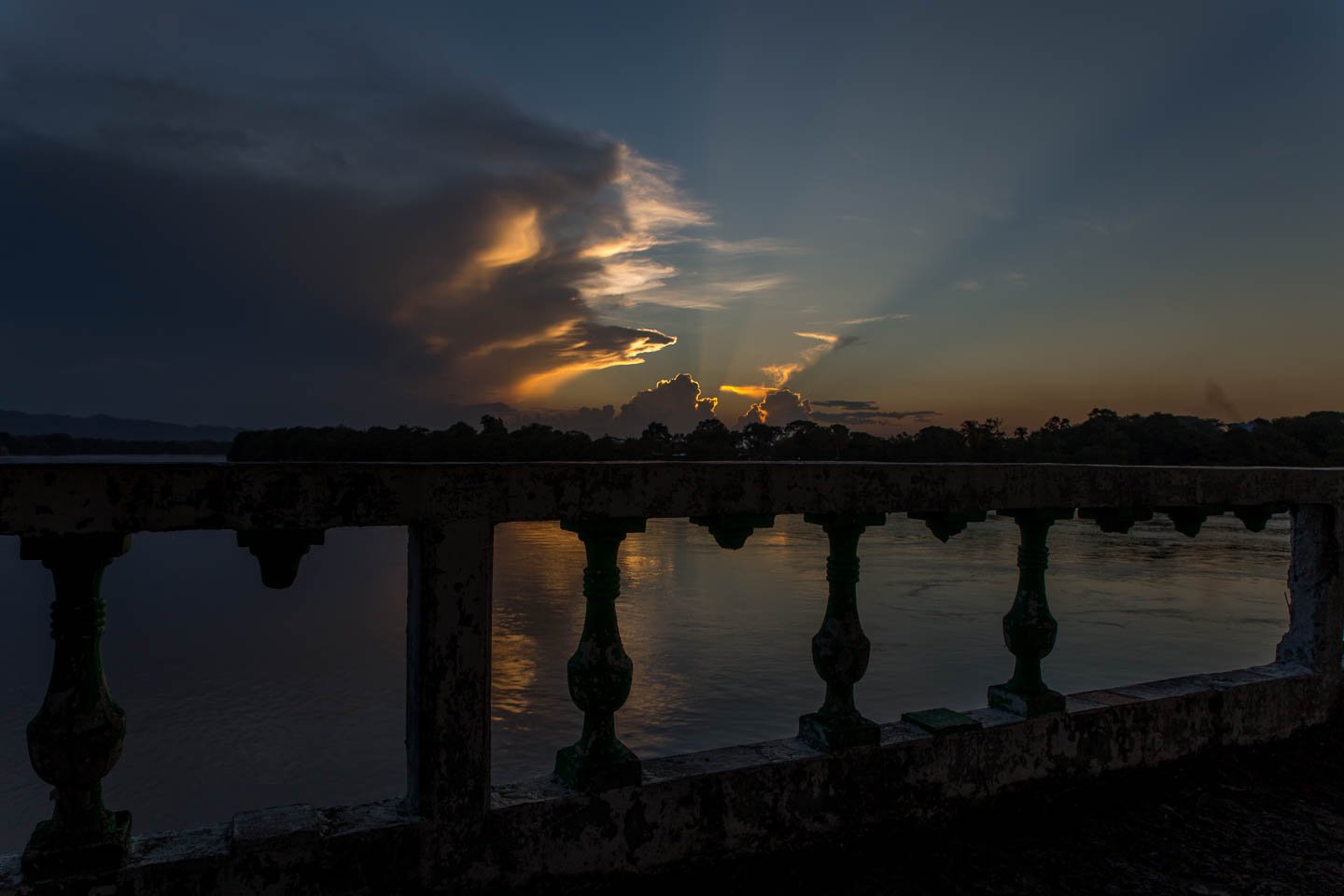 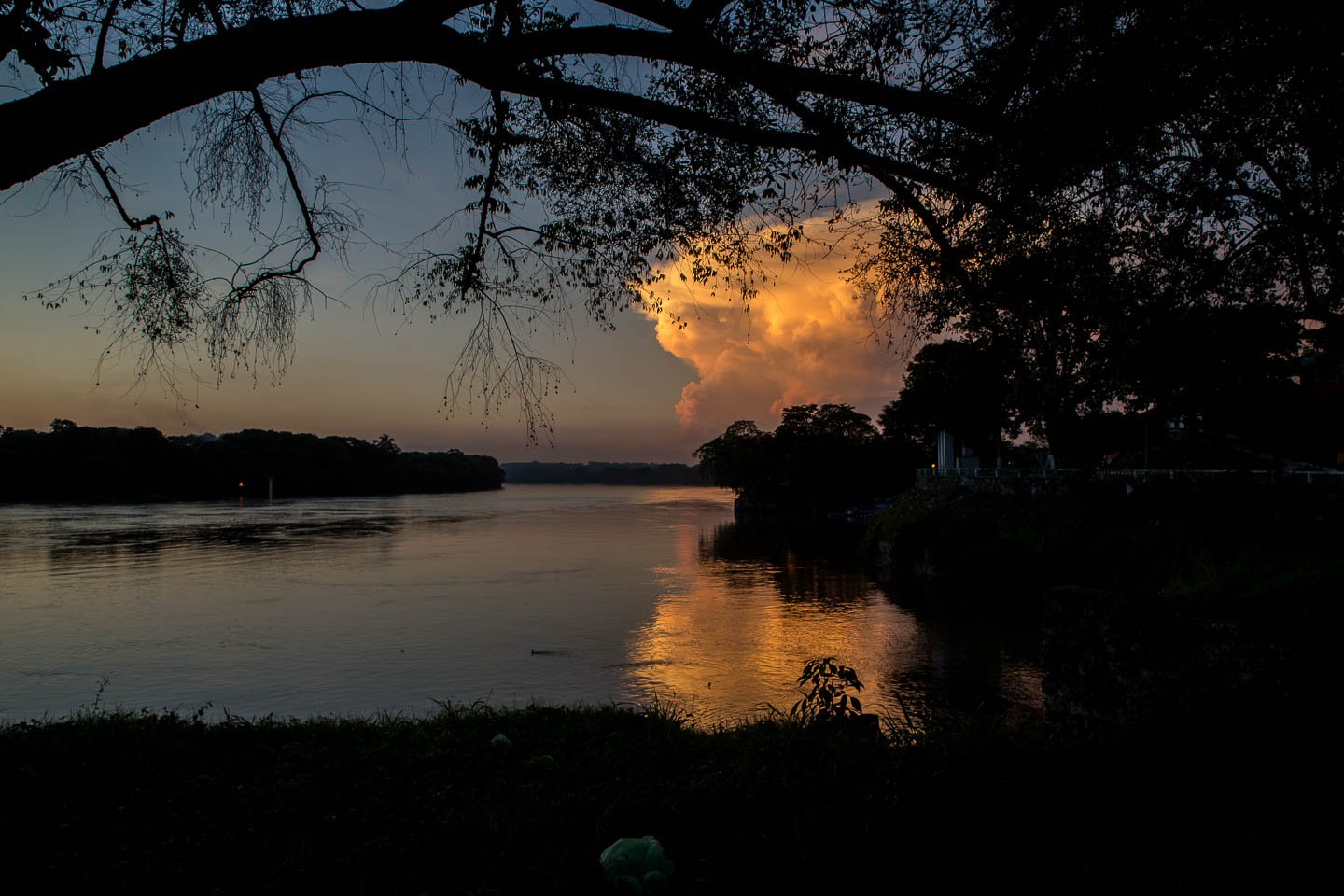 Early the next morning, we left town, drove to the border. At El Ceibo, we found a border post even more laid-back than the one in the north of Belize. Paperwork was stamped, forms were filled in. Copies were made. And it was done.