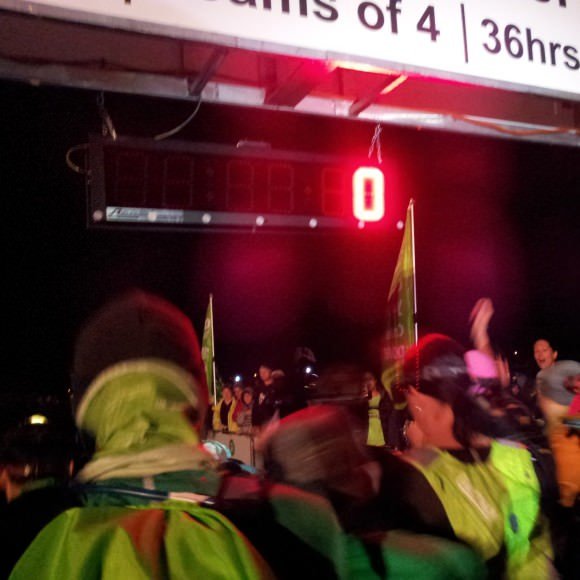 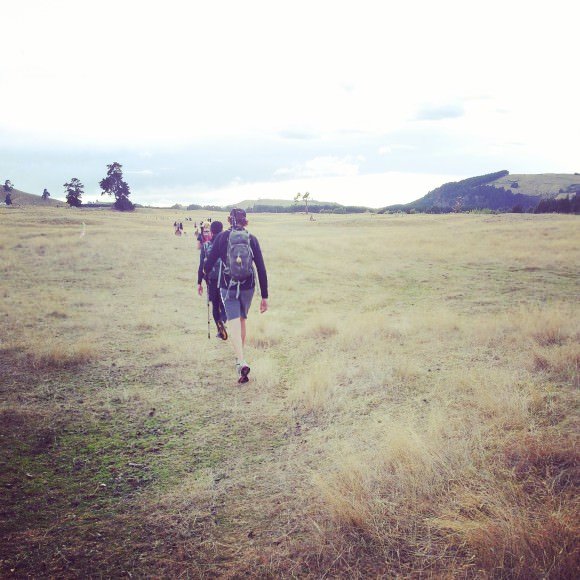 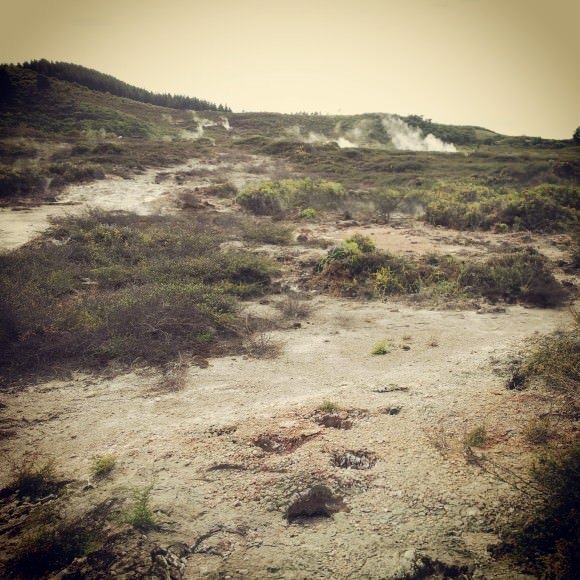 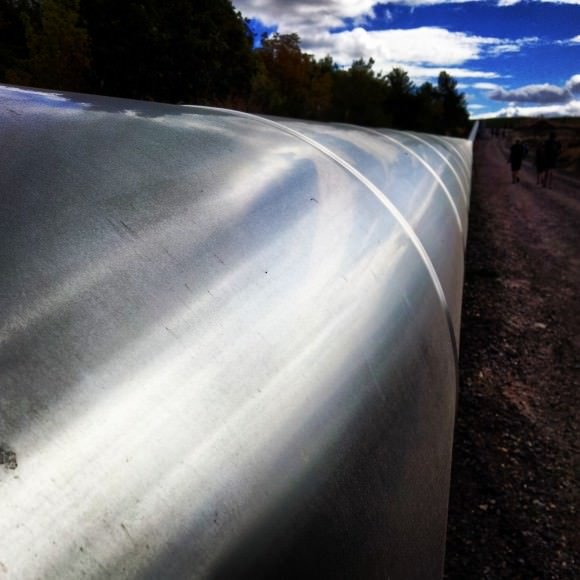 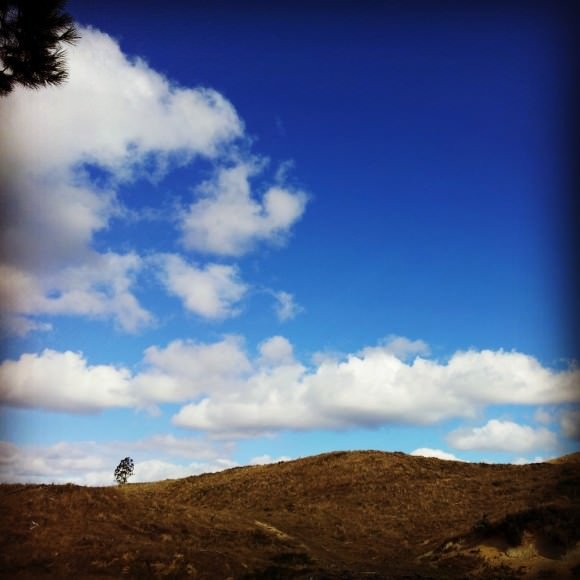 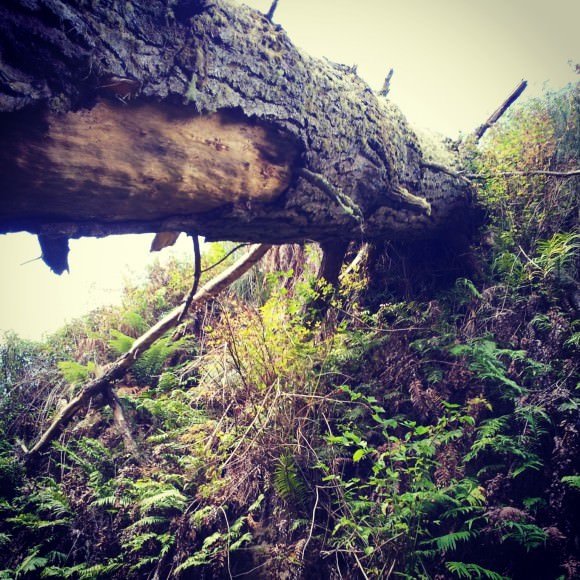 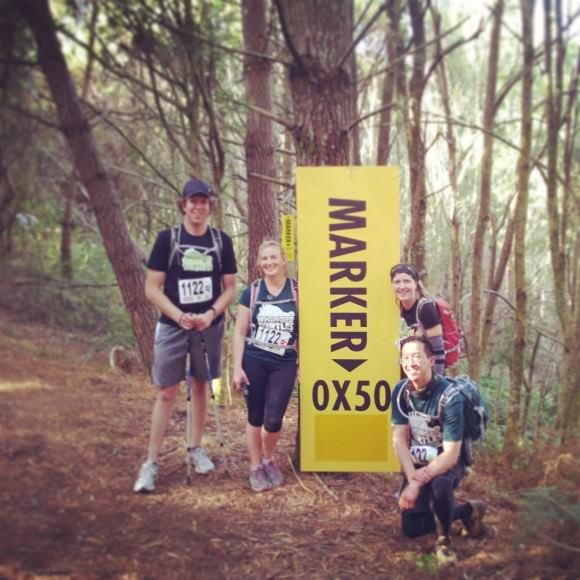 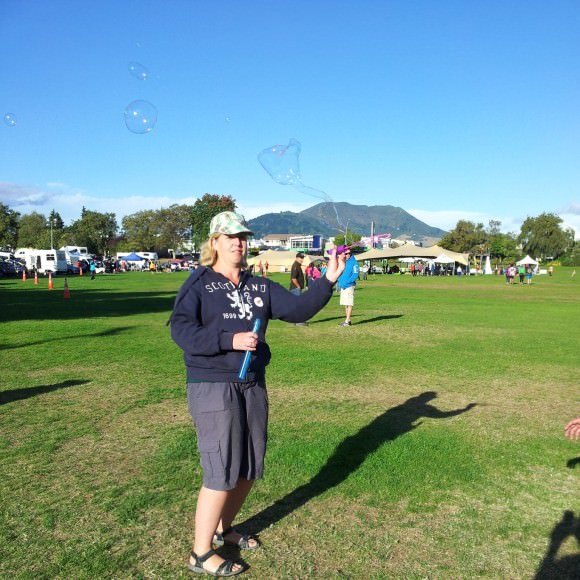 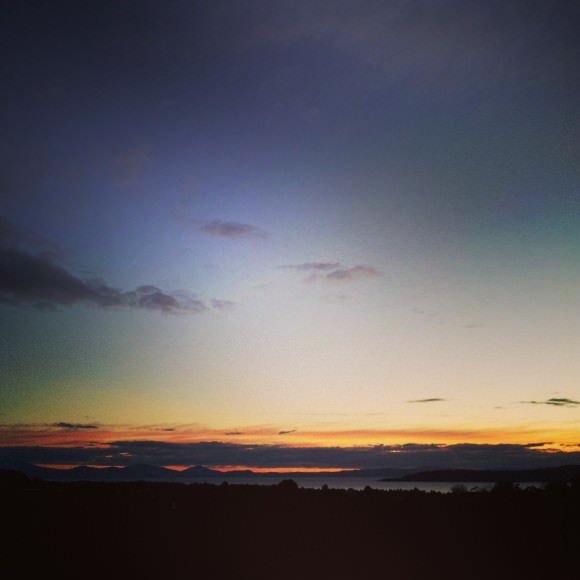 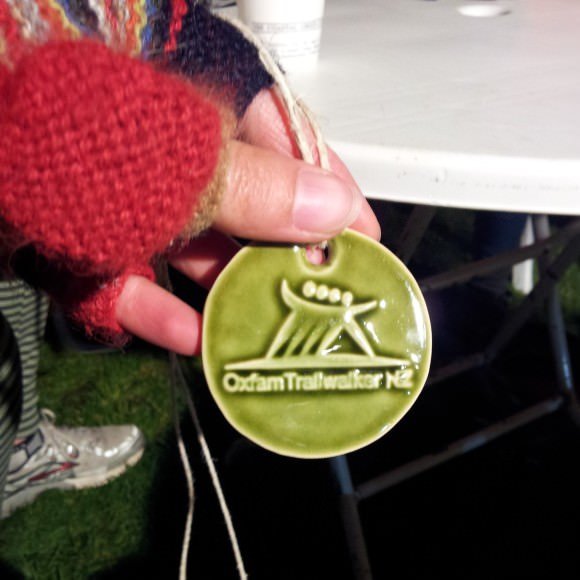 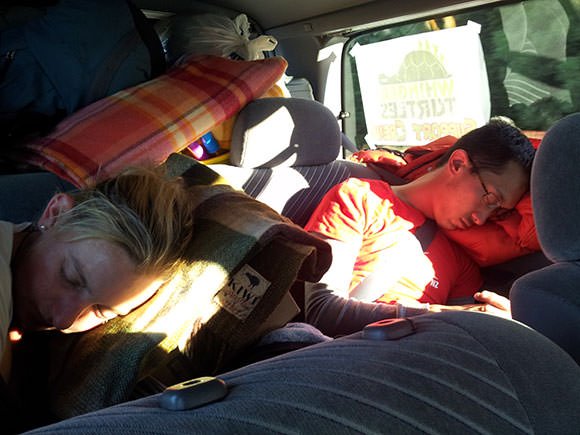 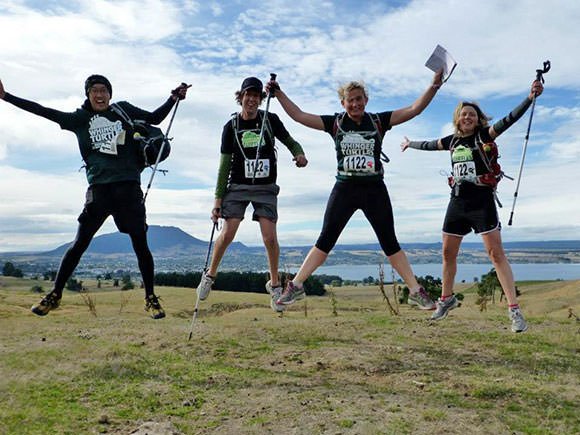 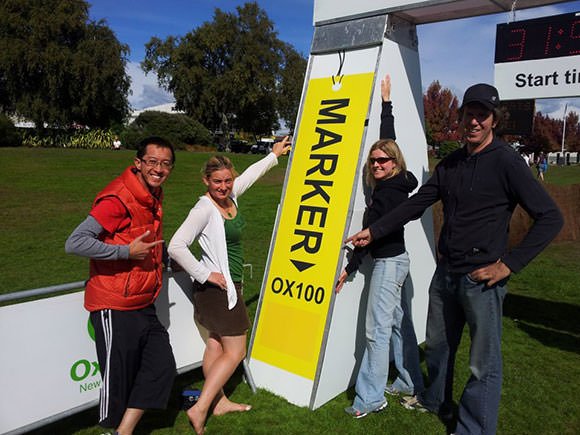 There are easy ways to go sightseeing and then there are hard ways.

Walking 100km in under 24 hours falls into the latter category.

Recently, we took in the sights around Taupo the hard way, we slipped on our sneakers bright and early on Saturday morning and just kept walking until our soles had lost 100km worth of tread. This may sound like a slightly mad thing to do, but the crazy thing was that we weren’t alone, there were over 1000 other people who were walking, running and limping alongside us.

The event was the New Zealand Oxfam Trailwalker where slightly masochistic lunatics walk 100km in 36 hours or less as a team of four people, partly because it sounds like fun and partly to raise money for charity.

Our team were the Whinger Turtles, we embarked on the walk decked out in our fancy t-shirts that we were awarded as prizes in the logo competition:

All the preparation, planning, training and fundraising we had been spending our spare time (and not-so-spare time) on for the last 6 months was coming down to one weekend in Taupo.

Four tired turtles and their equally sleepy support crew could be spotted yawning and mumbling about ‘sleeping’ and the ‘importance of coffee’ bright and early on the Friday morning as they waited for their flight. We were soon winging (or whinging) our way north to Rotorua en route to Taupo.

We spent a relaxing morning by the lake in Rotorua trying very hard not to contemplate what we had got ourselves into, but before long it was time to get moving.

Perplexed by the signs forbidding either feeding even numbers, throwing water at snakes or maybe just feeding the swans, we headed off to Taupo.

Don’t feed the even numbers

The next morning we awoke at 5 past stupid o’clock and headed down to the race start in the cold pre-dawn hours. Before we had time to change our minds and head back to bed, we were off…

We wound our way along the track, the rumour was that we were following the shore of Lake Taupo, but the view was limited to the small circles of light cast by our headlamps and those of the walkers around us. The first 16km stretch to checkpoint one was declared no longer under drought conditions as I suffered a little LBL (Light bladder leakage for those who haven’t seen the adverts) but never fear, no adult diapers were required, my hydration pack was damaged in transit and it no longer held water as it was supposed to. Leaving a trail of freshly hydrated walking track behind I eagerly waited a top up and downgrade to good old fashioned water bottle at the next checkpoint.

In quiet moments, we were entertained by our support crew who had provided us with crocheted turtle mascots to talk to in times when the rest of the team were less than conversational:

Our fabulous support crew also provided us with our leg by leg ‘Amazing Race’ challenges, loosely based on the TV show of the same name. I’m pleased to say, that despite the threats to the contrary, no one on our team was eliminated for arriving late at any of the checkpoints.

Our wonderful support crew provided entertainment and food—what more do you need?

Most of the walk meandered through farms, forest tracks and across open fields. Every now and then the peaceful New Zealand countryside gave way to something a little more out of the ordinary, as we walked past steam vents and bubbling hot pools. The aptly named Craters of the Moon made it very tempting to pause to re-enact scenes from various sci-fi movies, but since we were still not even half way, it seemed best not to linger.

Pretty sure we just strayed onto another planet.

The day was going well and we figured it wasn’t a sightseeing trip if we didn’t get at least one ridiculous jumping photo.

It wasn’t long before we arrived at the giant novelty half-way marker. 50km down, 50km to go—and not quite half way to insanity. There was a good chance we’d make it to the end without feeling the need to build an igloo out of Snickers bars or trying to time travel using a device made of pine cones, but 50km is a long way, so we didn’t want to completely dismiss the possibility of a decent into madness.

Wooah we’re half way there!

Shortly after the half way mark we arrived at checkpoint four which was tantalising located in the same field as the finish line. We were greeted by bubbles from the support crew. Not the beverage kind though, had another 47km or so to walk before we would earn those…

Bubbles, not the celebratory kind yet…

The next stretch took us along Taupo’s scenic lake front which again had us thoroughly impressed by all the thermal activity along the water’s edge. As we left the lake shore the sun was beginning to set and our sightseeing capabilities were again reduced to the small circles of light cast by our headlamps.

Sunset, it might look pretty, but it means we’ll be walking in the dark.

After walking for almost 15 hours, transitioning from the peaceful calm of a starry night into the chaos of checkpoint five left us questioning our sanity. Had we finally headed down the rabbit hole into madness? The Taupo Glider club had gone all out to prepare an enticing and bewildering checkpoint. Our support crew were waiting to greet us, decked out in wigs and stylish glow-stick accessories, they led us into the hangar where our arrival at the Mad Hatter’s tea party was announced and we posed for photos with the Mad Hatter himself (The White Rabbit was on a coffee break) and blinked in disbelief as the smoke from a late-night sausage sizzle tempted us to stay.

Glad we got a photo of this one, when we left the checkpoint we needed it to confirm that it was not just a mass hallucination.

Reinvigorated and without any trouble from the Queen of Hearts, we headed boldly back out into the darkness. We were embarking on the longest section, a 19km slog in the dark with only the promise of an aid station with portaloos and hot drinks to sustain us.

The fabled aid station was located about 13km in to the stage and was a glowing beacon of hope after a relentless trudge along the river side. Most magical of all was the seemingly endless supply of hot chips. I suspect I will never again taste hot chips as fantastic as the ones I scoffed at that aid station just after midnight, in a warm tent, insulated from the dark and the cold after 16 hours of walking.

Unfortunately the aid station was only a fleeting moment of warmth before we felt the need to wander back into the darkness. The final kilometres passed slowly as the temperature rapidly decreased from brisk to positively polar. (Technically it didn’t freeze, but I’m going to stick with my story that it dropped to negative 20 and icicles were forming on our furrowed brows). Each kilometre marker seemed further away than the previous and tired legs started to wobble.

We arrived at the second to last checkpoint, cheered by warm blankets and hot drinks from our spectacularly supportive and surprisingly chipper support crew. After refueling and reheating we were off, for the final home stretch—13km divided into two shorter stints by the final checkpoint. The temperature dropped lower and lower as we fought off hypothermia, starvation and insanity. (The first two may be a slight exaggeration, but the third one was a distinct possibility).

As we had been throughout the course of the day, we were receiving texts, tweets and Facebook messages encouraging us on. By now most of our sensible friends and family were tucked up asleep in bed, but a tweet of encouragement from the other side of the world, where it was still daytime arrived just as things were looking particularly bleak and spurred us on.

Blitzing (very slowly at a snail’s pace) through the final checkpoint we were nearly there, less than 5km to go, we’d been walking for 23 hours and every step was a challenge.

We counted down the last trail markers with as much enthusiasm as our sleep deprived minds could muster…97, 98, 99… then in the distance—bathed in the eerie light of a dozen glowsticks 99km! We were actually going to make it, walk 100km, shocked and amazed we picked up the pace to a quiet shamble that would make any zombie proud. We could taste the finish line (or maybe just the questionable curry we had eaten for dinner) either way, the flavour was tangible and the end was in sight!

Only one kilometre left!

Finally, after wandering about for nearly 24 hours, there it was, the finish line. We stumbled across, did a terrible job of co-ordinating our line cross for the finishing photo, folded ourselves up in the fluffy warm blankets handed to us by our amazing support crew and sat.

Shortly after crossing the finish line

We each received a small ceramic medal to reward us for completing the challenge. It is safe to say that I will treasure this for a very long time, its not every day you walk 100km.

I’ll be treasuring this for a while.

Later that day, after some much needed beauty sleep we headed back down to the finish line to cheer on some of the other teams who were still finishing and took the opportunity to pose for some more co-ordinated finish line photos. Please note the smug and victorious grins on our faces, that is just what your face does after walking 100km, you have no control over that…

Some turtle facts and figures: