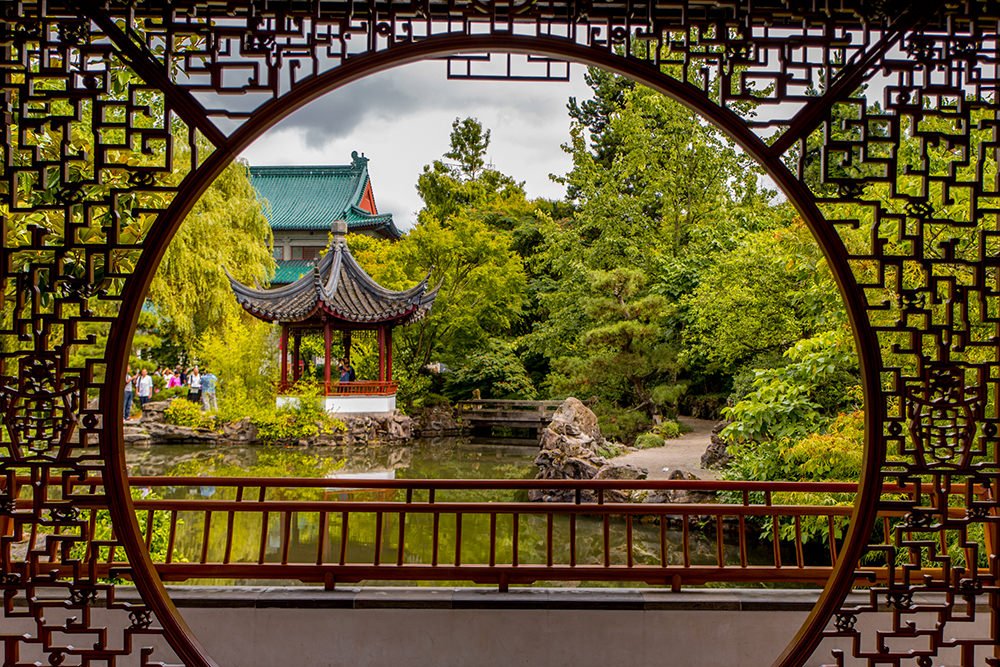 It had been quite some time since we had been through a big city. Some would argue that Vancouver, BC doesn’t actually fall into the category of big city, but for us it was certainly a change of pace.

We were very kindly taken in by Richard and Ashely from Desk to Glory, who allowed us to snooze on their fold out couch. We were suitably amazed by such novelties as indoor plumbing and no mosquitoes. At which point we reflected that it had been 50 days since we had slept anywhere other than our rooftop tent, with the exception of one night in a train.

The problem with this, was it gave us a taste for what we had been missing. Suddenly sleeping indoors became a tempting idea again. Very tempting. 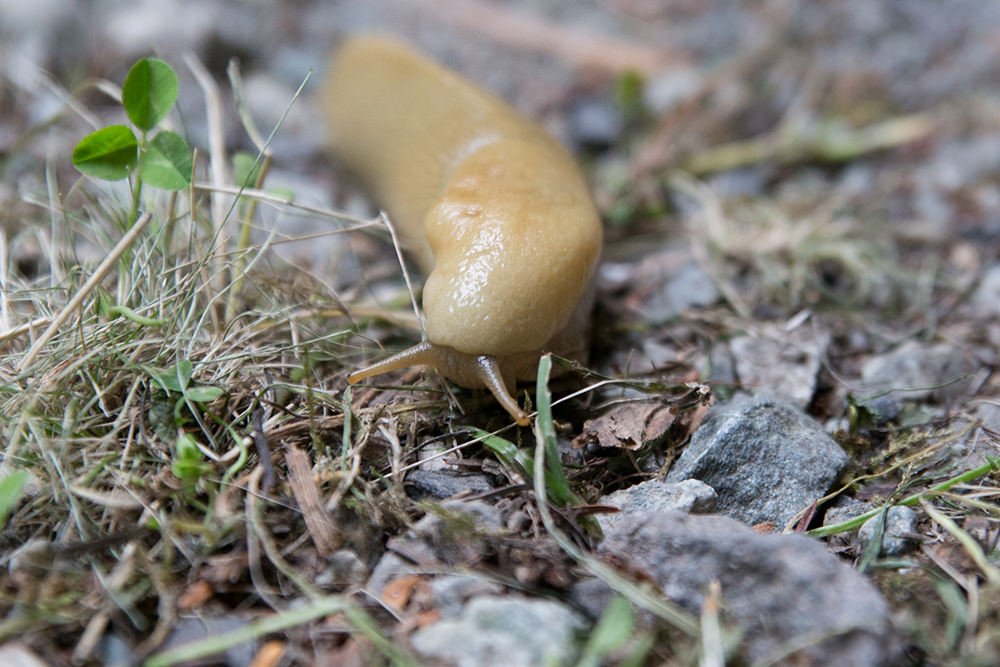 Since Richard and Ashley are both currently responsible people with jobs and we had awkwardly shown up during the week, we really only had a chance to see them in the evening. We made plans to head out to dinner and to also meet up with Peter and Dace from Izaicinajums.com who were just days away from embarking on their own Pan-Am journey.

By this point both we both had made good use of the indoor shower and were as presentable as we had been in the last few months, so the restaurant actually let us in—bonus!

Peter and Dace, unlike us, appeared to have some sort of travel plan for their time in the US. Also they had finished working on their chosen vehicle. We still desperately needed such fundamental things as tyres… undeterred by their show of organisational skills we continued with our vague plan of ‘South-ish’.

Vancouver itself is a great city and like many places we visited over the following couple of weeks, we really wanted to spend more time exploring than our travelling pace allowed.

Much of our time in Vancouver was spent catching up on work, researching the best place to buy tyres and a bike rack (as well as some bikes to put on one) and trying to find a reasonably priced fridge.

We did make some time to see a small part of the city:

We discovered the Police Museum, which accounted for a big chunk of an afternoon. 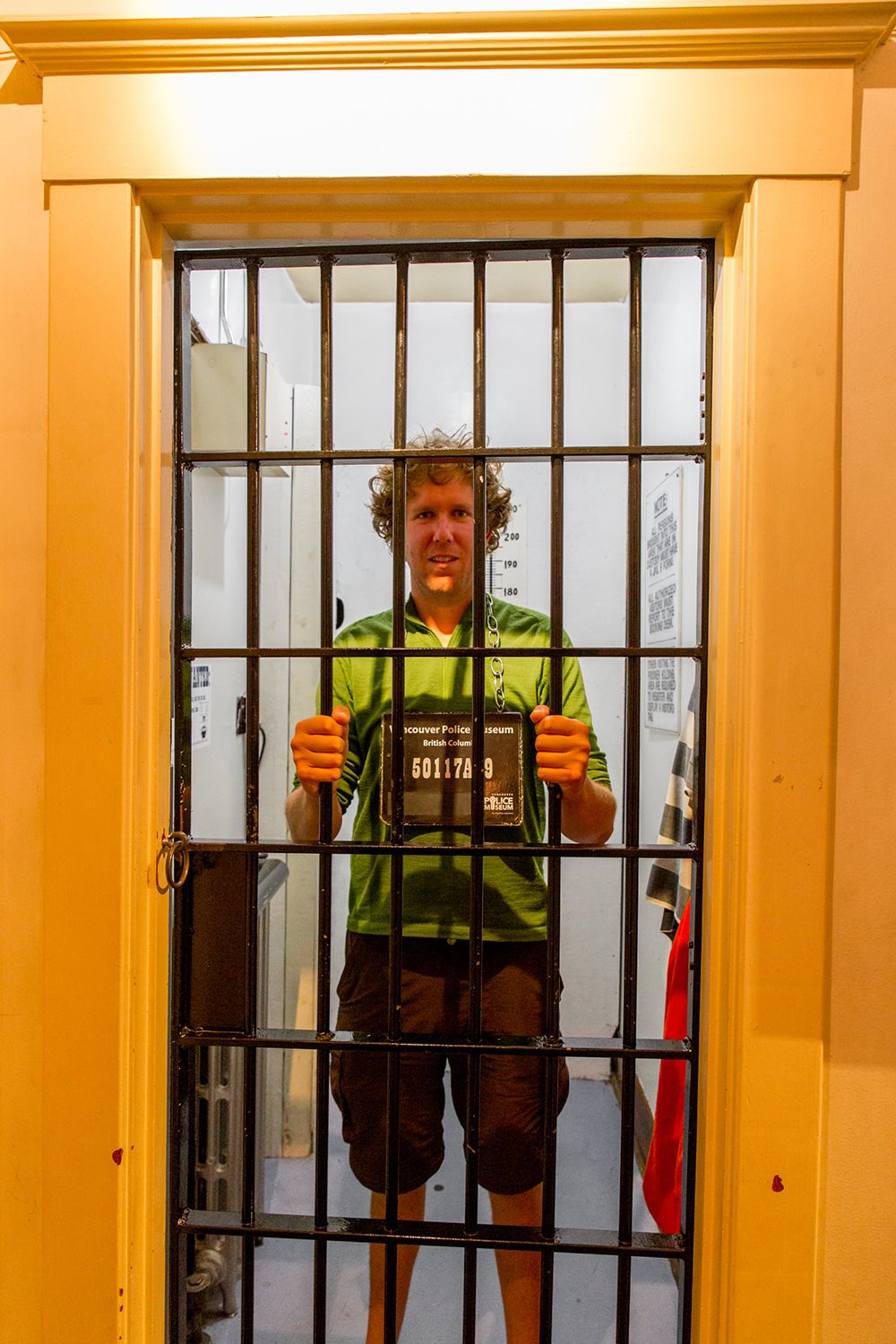 Ben having an arresting time at the Police Museum. Apologies for the lamest pun on this blog so far. 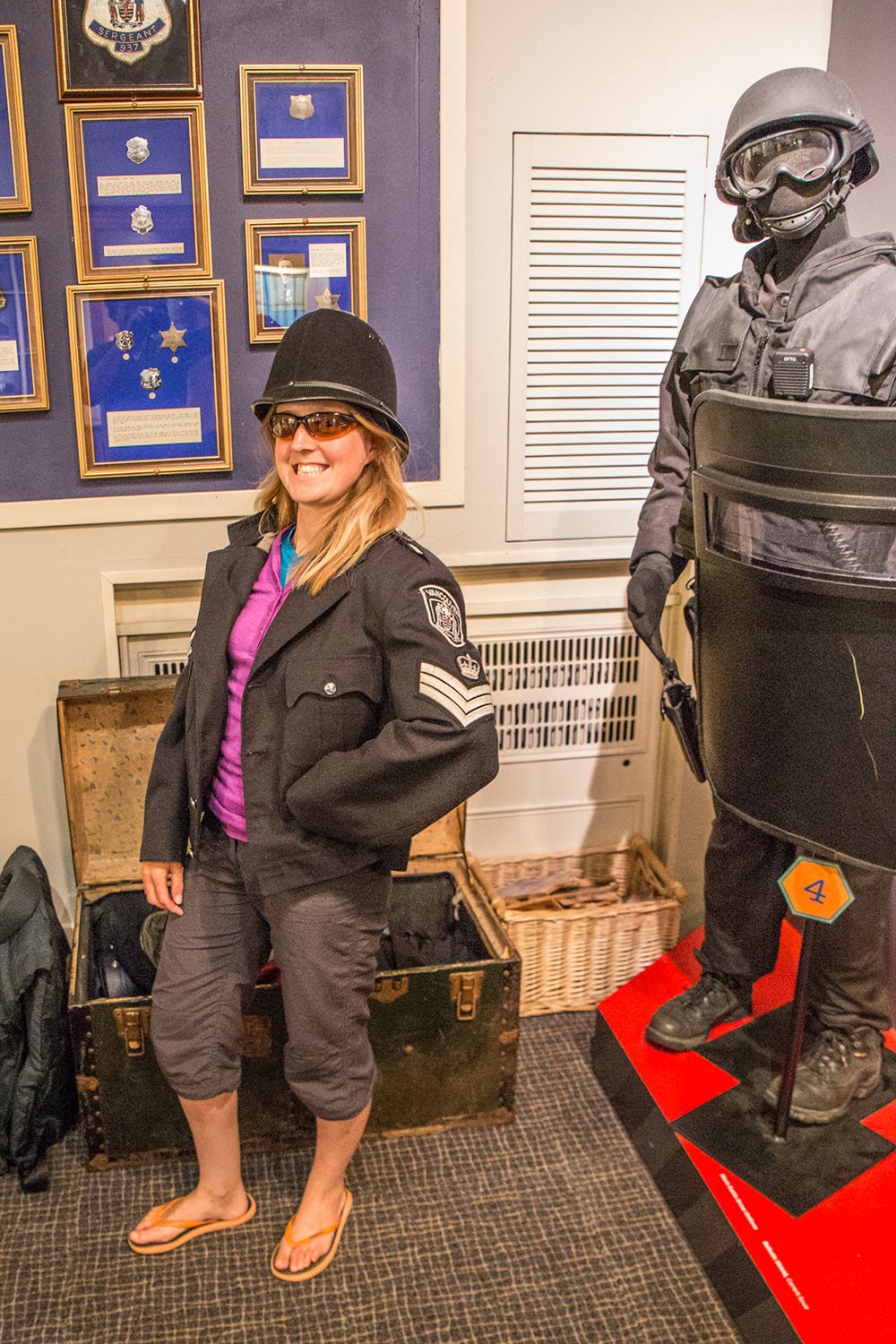 Apparently wearing the jacket and hat didn’t give Emma any powers to arrest people, or hit them with sticks. 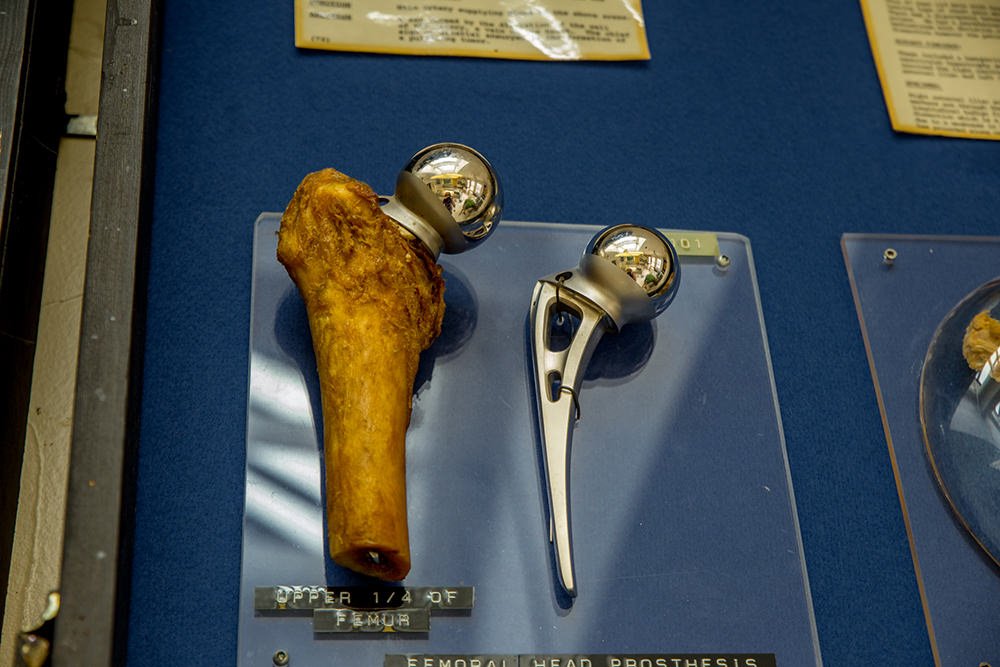 The autopsy room gave us a chance to see a lot of things that should be on the inside of people. These things were now on the outside, after the folk containing them met an untimely demise. 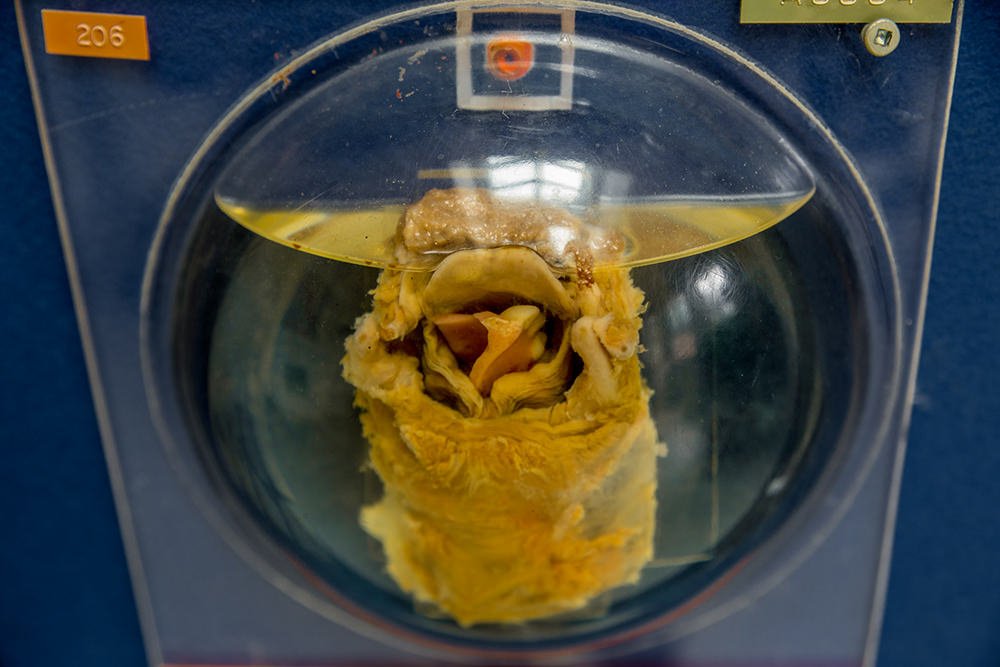 Like this set of false teeth lodged in a larynx. Yep, that’s right—take a closer look at that one at your own peril. 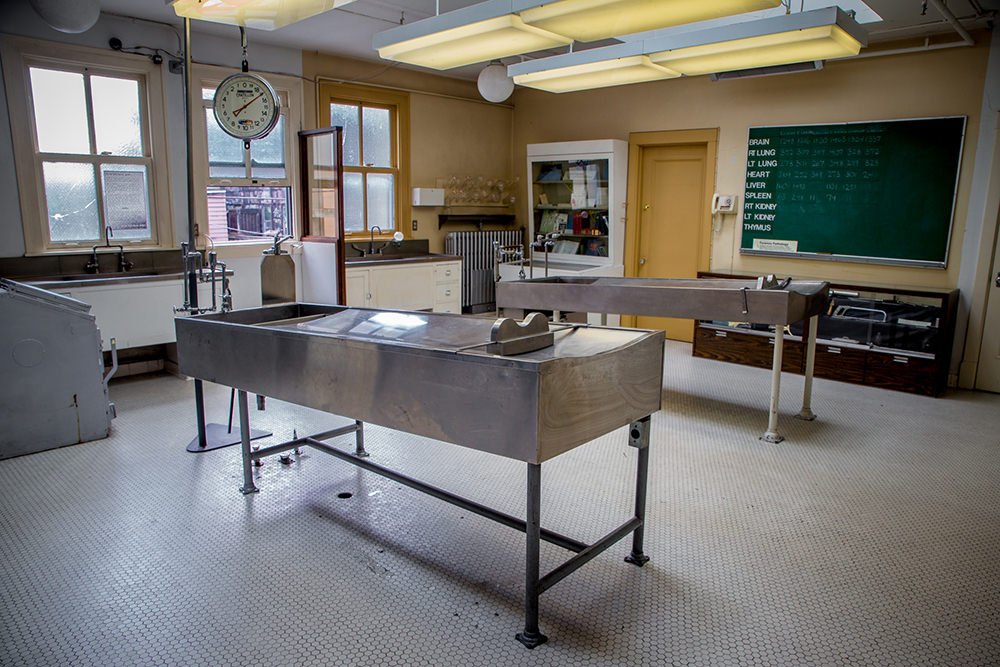 The autopsy room is apparently the location of Errol Flynn’s 1959 autopsy. This is the closest thing to a celebrity sighting we were going to have in Vancouver.

We had the obligatory look at Stanley Park. 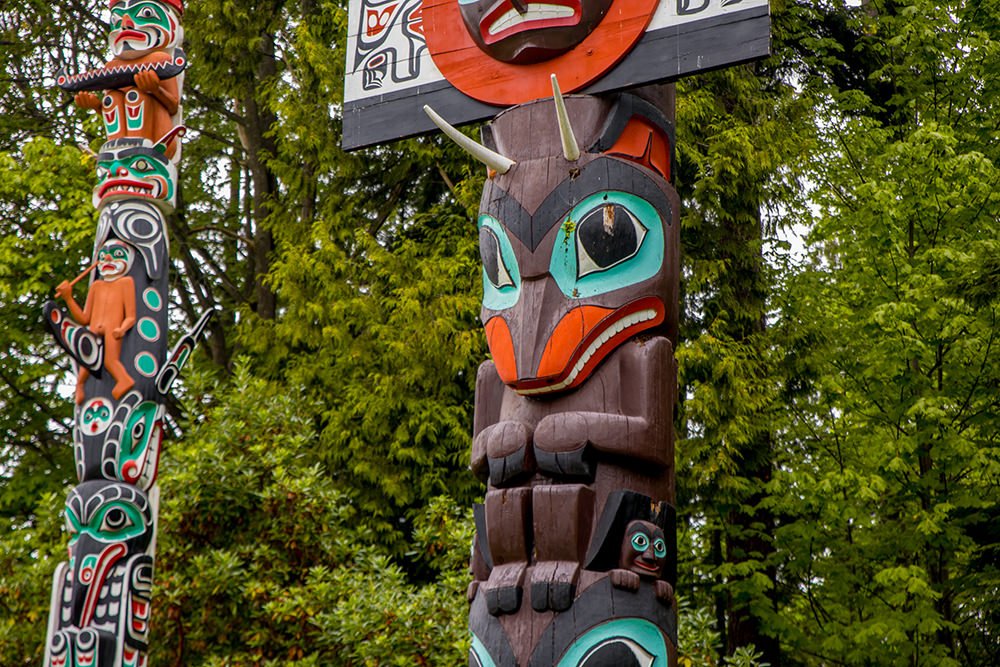 Although just down the road the pedestrian crossings that had been jazzed up (Possibly for Pride week?) were more of a highlight for Emma. 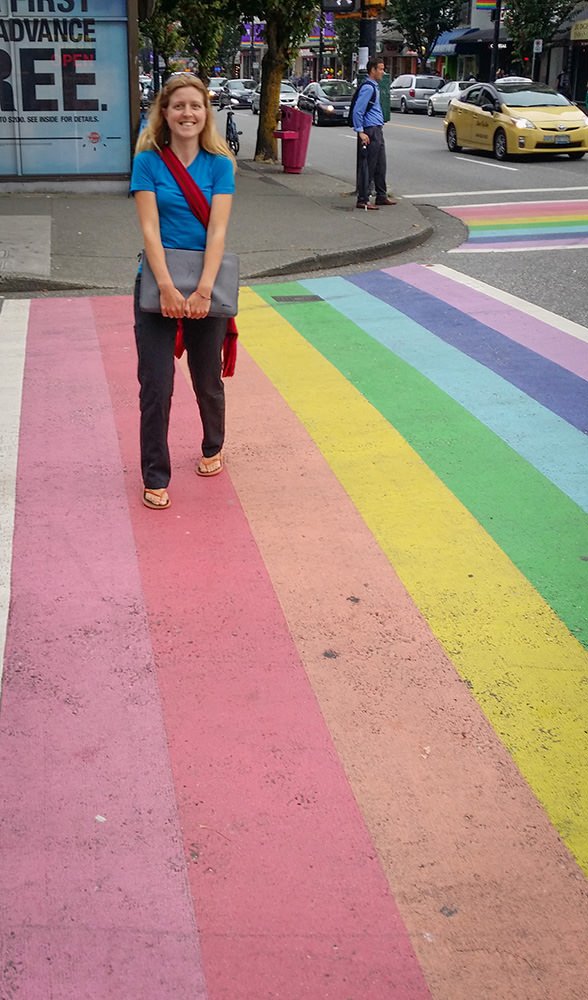 Sorry Stanley Park, but you just can’t compete with this.

Mostly, we just spent the days being overwhelmed by the crowds and the traffic and wondered how on earth we would cope in the bigger cities as we travelled south.

Sadly we ended up giving Chinatown a miss, so Emma felt like she left Vancouver having eaten insufficient dumplings. Next time Vancouver. Next time.

We left Vancouver with every intention of returning north after Burning Man, but as time ticked by on our US visa and we chipped rapidly through our budget, we realised this would not be a happening thing. Turns out the USA is pretty huge. Alas, so is Canada, we can see ourselves returning one day to explore further. But for now—South-ish!

Thanks for letting two smelly Kiwis into your house Desk to Glory! Since we failed to make our way back—we hope to meet you for camping on a tropical beach one day soon!

CanadaChinesecitycrossingdrivingfoodgardenmuseumparkpolicerainbowroadsslugtraffictravelVancouver
« On the road to Whistler
Too much stuff: A Second Roof Rack »